We have spent the past three months skiing from our motorhome. Now that we have finally packed the skis away it is time to do the totting up. How much have we spent on our wildly extravagant (for us) season on the slopes. A while ago I posted thoughts on our budget for skiing from the motorhome. So how have we done?

Our skiing trip lasted from 27/01/19 – 22/04/19 inclusive. 86 days and nights spent in and between ski resorts. We started counting on the day we arrived in Vaujany (our first ski area) and finished on the day we left Bormio.

During this time we have skied in 12 resorts

Between us we have purchased lift passes for 67 days

We have spent 71 nights in ski resort parking spots, of which 2 were campsites. Our longest stay was 11 nights and our shortest was 1 night.

We spent a further 20 nights in other locations, either in transit or during our break in the Verdon Gorge area when we were escaping the combined effect of French holidays, UK half term and unseasonably hot weather.

What’s in the numbers

We haven’t included costs for getting to/from the UK. This is because we are travelling pretty much constantly, our costs will be pretty meaningless for other people, especially as we haven’t returned to the UK yet.

We have excluded our set up costs i.e. purchase of ski insurance. You can see these costs in our budget post.

We have excluded the one off costs that we incurred during this period. For example our vehicle tax or our storage unit payment. These costs are not related to skiing but we include them in our annual summaries if you are interested.

Our costs are expressed in British Pounds (GBP), either converted at the point of transaction or using the most recent exchange rate we achieved when converting to euros.

The moment of truth – the numbers. 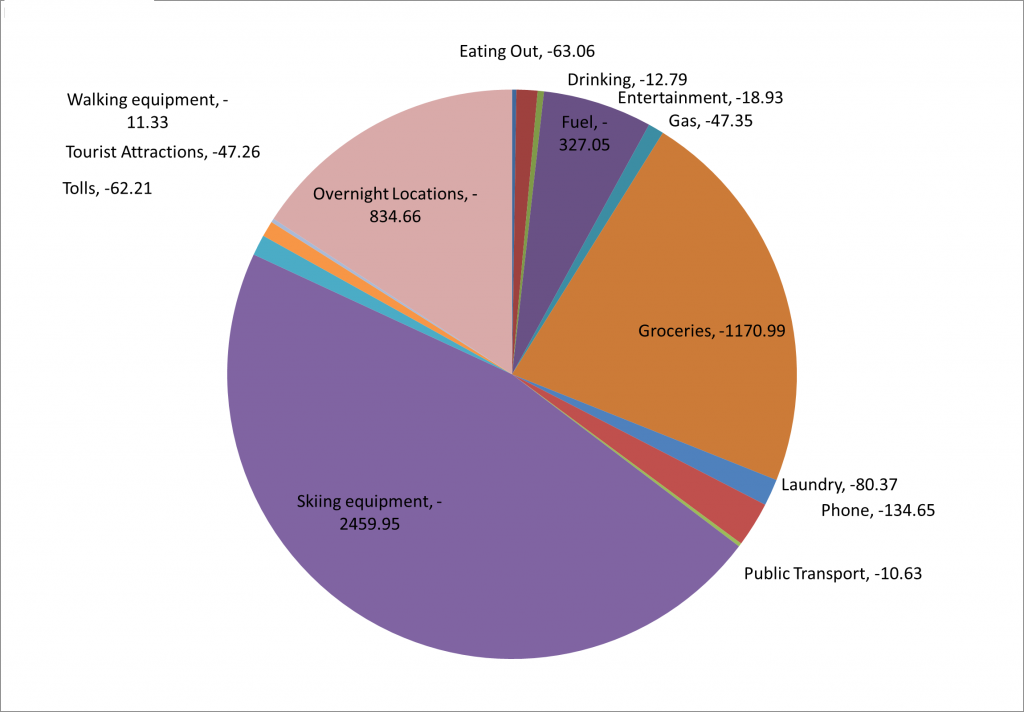 Our grocery bill was embarrassingly huge. Yes, we include booze in our groceries but really at £95/week we have been extraordinarily profligate. I blame this on our hunger for comfort food  and addiction to French duck. We made up for this by not eating out very much (only two lunches in the whole time). We are fans of eating our packed lunches in cable cars unless we’re somewhere that has a picnic room (Alpe d’Huez came out top for providing heated rooms for us cheapskates).

Our gas bill was very small – a sign of the relative warmth of this season. We only had our gas heating on all night on two occasions. Otherwise we either had no overnight heating (we’re quite hardy) or were able to use our fan heater and oil filled radiator to keep Bertie warm enough that nothing froze overnight. Our lowest overnight temperature was a balmy -12ºC, a far cry from last year’s -25°C.

Our cost for overnight locations came to an average of £9.71 per night. This compares to our previous average for France and Italy of £4.88 a night. This was less than we expected, probably because of the time we spent outside of ski resorts. We spent a lot of time in locations with electricity because we don’t have a generator, especially earlier in the season when days are shorter and solar power less likely to top up the batteries.

We chose to ski in France and Italy predominately because of their cheaper overnight costs. Although we are a little disappointed we didn’t get to Austria for a bit of luxury at the end of the season as we’d originally planned.

We didn’t spend as much on fuel as expected. Mostly because we didn’t travel as far as we had originally planned, only making it as far as the mountains of western Italy. By moving in small increments we kep our travel costs right down.

Our only toll cost was the Mont Blanc tunnel. Otherwise we had the time to avoid toll roads and travel slowly.

How could we save money

Our biggest cost was lift passes, and the best way to save money would be to buy a season pass. Depending on the ski area that could have reduced our lift pass costs by half.

We are not sure if a traditional season pass would be for us because we felt we would get a little bored if we skied the same area all the time. However some season passes offer the opportunity to spend a few days in other ski areas (Alpe d’Huez) and some season passes can be bought for a whole area (Aosta Valley for example). We were also intrigued by the Ski A La Carte option, where you get discounted lift passes in a wider variety of French resorts. If we were going to Switzerland the Swiss Magic pass looks like a good option for a wide range of resorts and I’m sure there are other schemes that would provide variety for a lower cost than we spent.

There are other ways we used to save money on lift passes if you want to travel around and ski on an ad-hoc basis:

We have considered whether to get a generator, this would allow us to stay at cheaper parking spots even in the worst weather and would take away some of the stress factor associated with turning up and wondering whether we’ll actually get an electrical supply. We’re not sure how quickly it would pay back though so it’s a decision that is being deferred for now.

Obviously we could reduce our expenditure on groceries. We need to curb our desire for expensive food. That’s something we’re working on right now. However on the flip side, we would like to treat ourselves to a meal in a restaurant more frequently.

Is it worth it?

In our opinion a motorhome ski holiday makes financial sense, if:

You own a motorhome already or are thinking about buying a motorhome for all sorts of other reasons (investing in a motorhome purely to spend one season skiing is unlikely to be cost effective, especially if it needs work to make it fit for winter use, and renting one even less so).

You have the leisure time to get away for more than a week skiing per year. Getting to/from ski resorts can easily eat up a couple of days in each direction depending on you capacity for driving long distances and which resorts you want to go to. If you only have a week’s break from work that’s going to seriously eat into your skiing time.

You want the flexibility to move around and explore different ski areas depending on the weather/snow conditions/your personal whimsy. I cant think of any other option that would provide such flexibility at low cost.

Of course it’s not all about money and there are lots of non financial reasons for using your motorhome for a skiing holiday. When the weather is rubbish there is nothing quite like being in your own home on wheels.