Paul doesn’t display the highest levels of enthusiasm when visiting historical sites unless they have some element of engineering or architectural interest. So when I announced that I wanted to visit some ancient rock engravings he changed the subject to snooker. He doesn’t get much choice though, he usually gets dragged along regardless.

The Val Camonica area of the Italian Alps is a long wide valley that stretches north to south from Ponte di Legno in the north down to Lake Iseo in the South. For some reason it is uncommonly rich in prehistoric rock art. As the glaciers melted after the ice age, people slowly started to migrate north into the valley and establish settlements. As they started to settle they started to engrave the glacier smoothed rocks with scenes of hunting and worship, mostly using a ‘striking’ method to create the images one tap at a time. Future generations added and embellished the art, starting to engrave more agricultural subjects as the inhabitants of the valley moved from prehistoric to bronze and iron age. Paul called it graffiti (and was always on the look out for the rude bits), and in a way I’m sure he’s right, but there is more to it than that and I love to muse on the ‘why’; why here and not elsewhere? why these images?

We parked up in Capo di Ponte at a privately run sosta associated with a small nature park and café. This is a parking spot within easy walking distance of two of the sites; the Naquane site is the larger and costs €6 to enter (the ticket also gets you into the local museum). The Cemmo site is smaller and is free to visit.

We wandered around the Naquane site with a useful English pamphlet, occasionally bumping into the handful of other visitors. At first, in the dim light of an overcast day, we couldn’t really make out what we were looking at. There are some boards that tell you some of the more interesting petroglyphs to look out for, and most of the rocks have been cleaned of algae and lichen, but otherwise there is nothing to help you make out the difference between man made lines and natural cracks in the rock. Then all of a sudden we could see, a subtle shift in perspective and the images were obvious and plentiful. I have enhanced the contrast on the photos to make it easier to see. 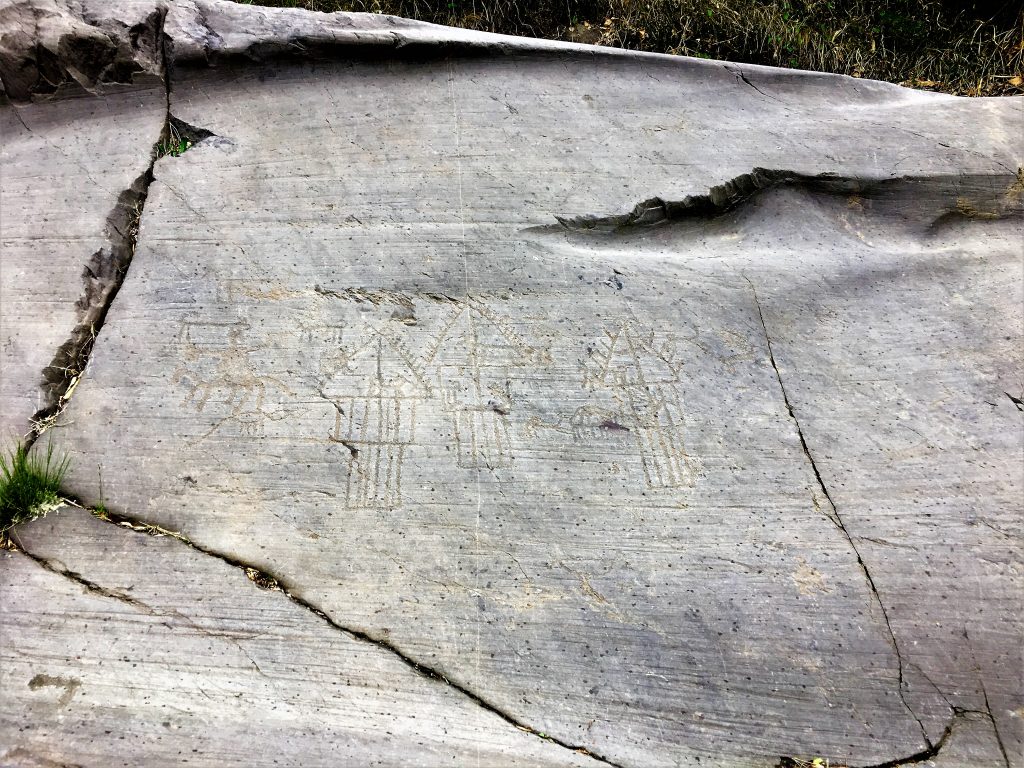 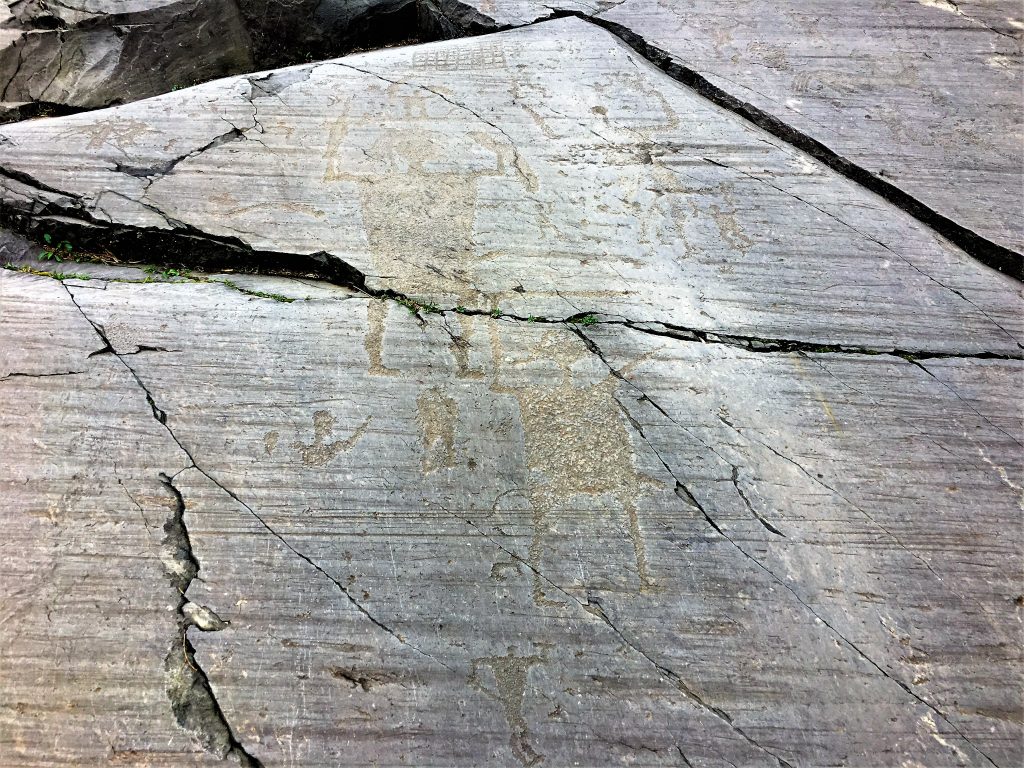 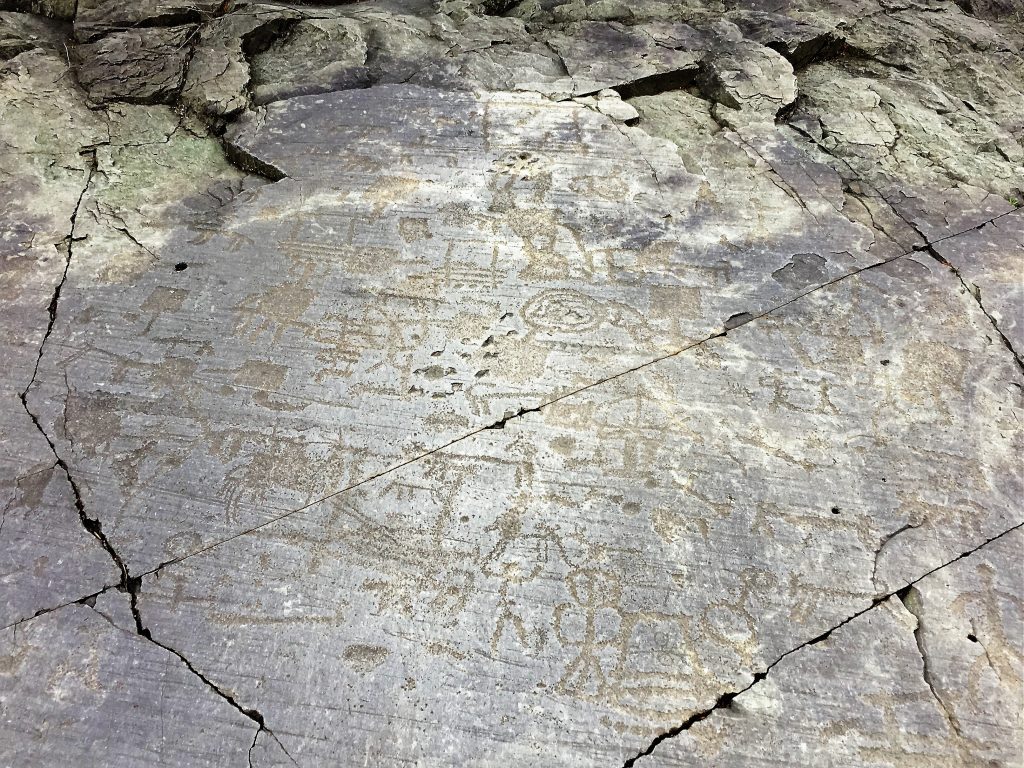 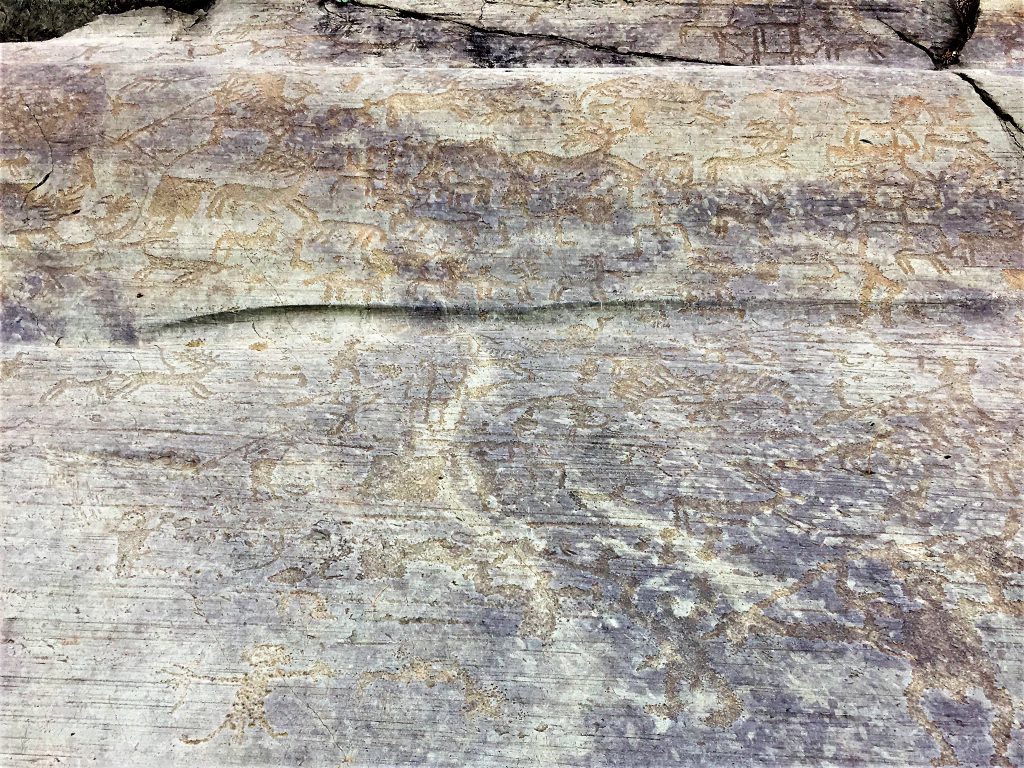 A herd of animals (amongst other things). Were they all carved at the same time? 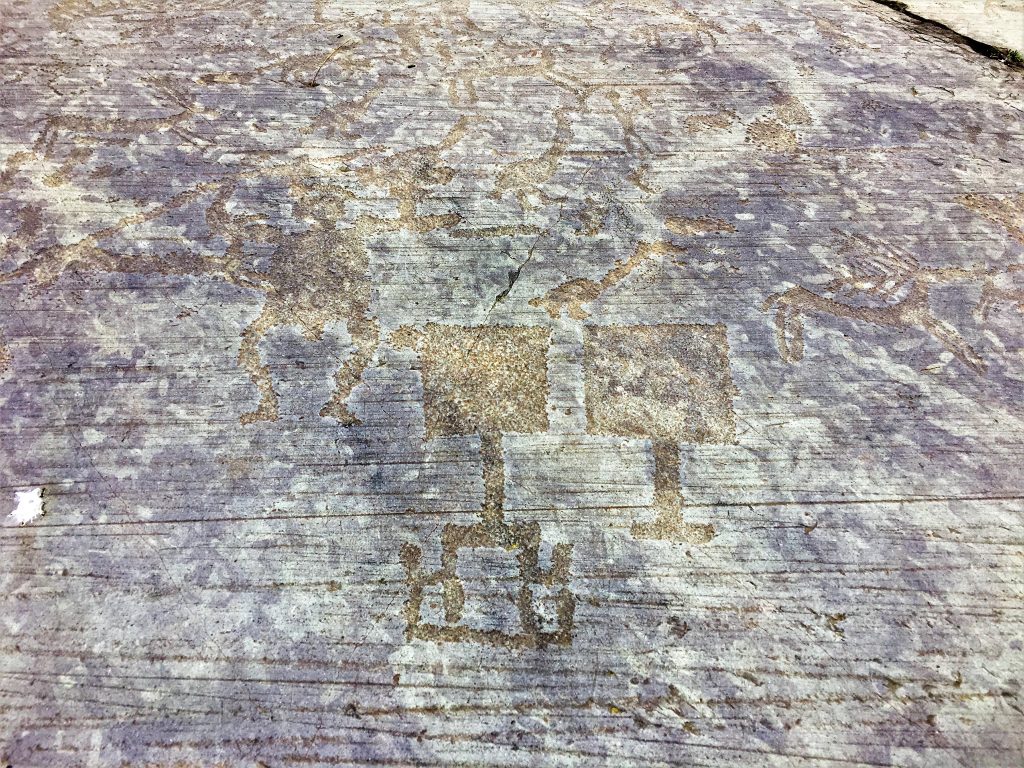 No one is quite sure what these square shapes signify, they are referred to as shovels in the booklet. 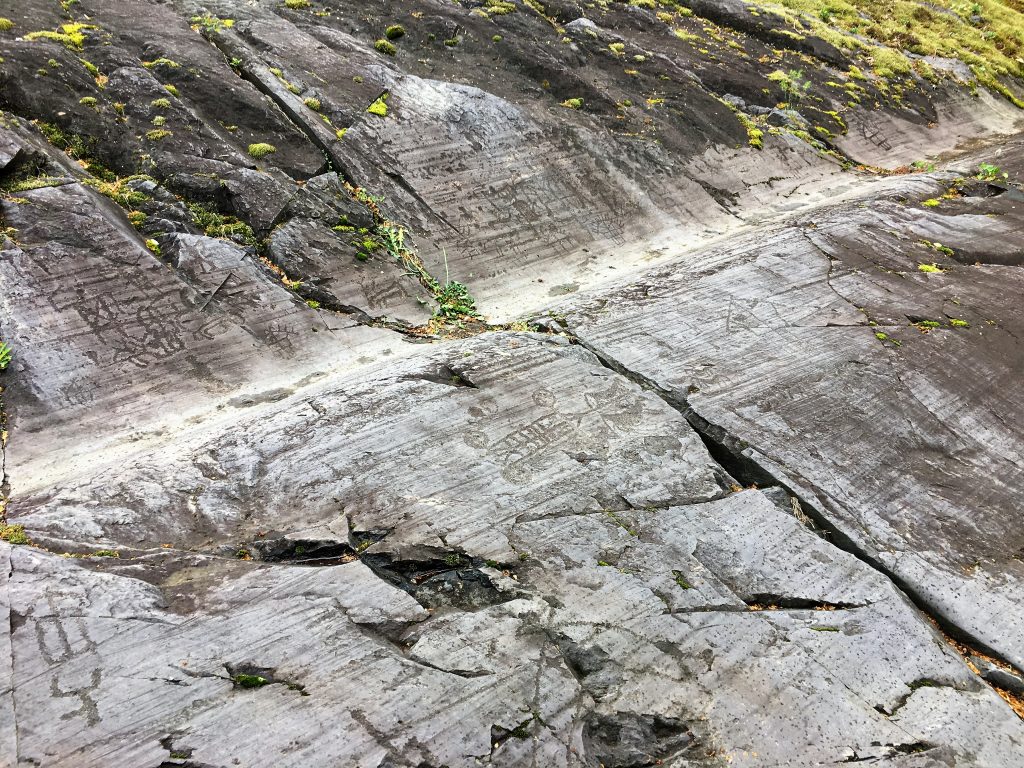 After forcing Paul to walk around and spot images for me (he’s got a much more observant eye), it seemed unfair to make him visit a second site, so I left him back in the van and wandered uphill to the Cemmo site. 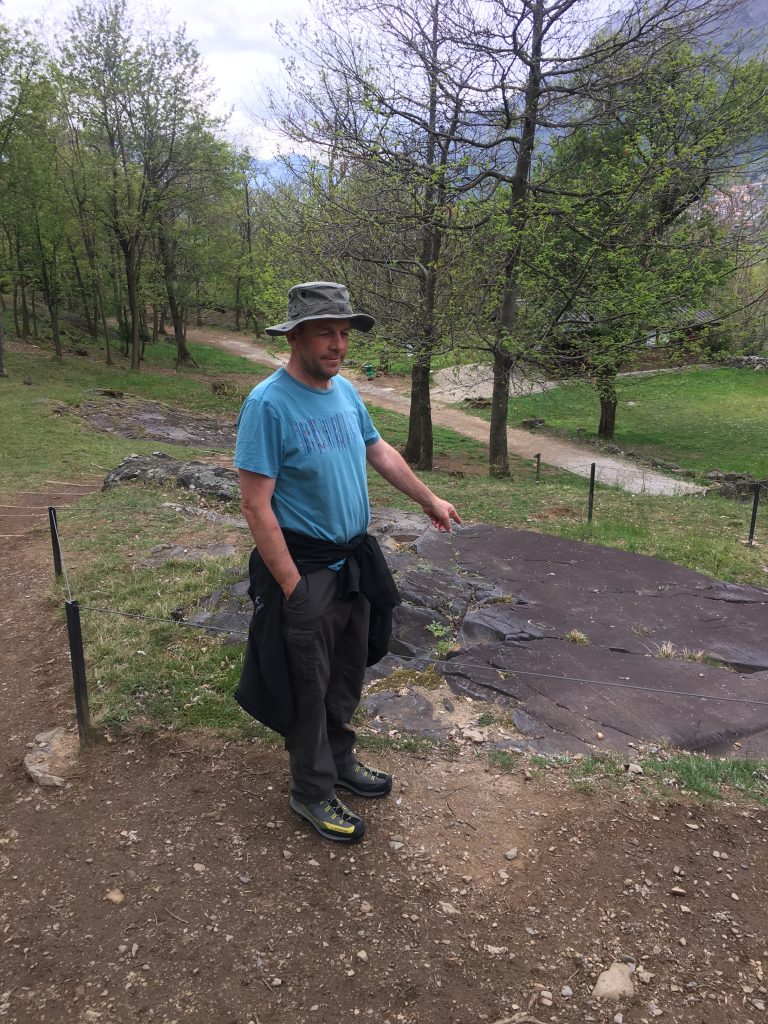 Paul looking enthusiastic about another rock 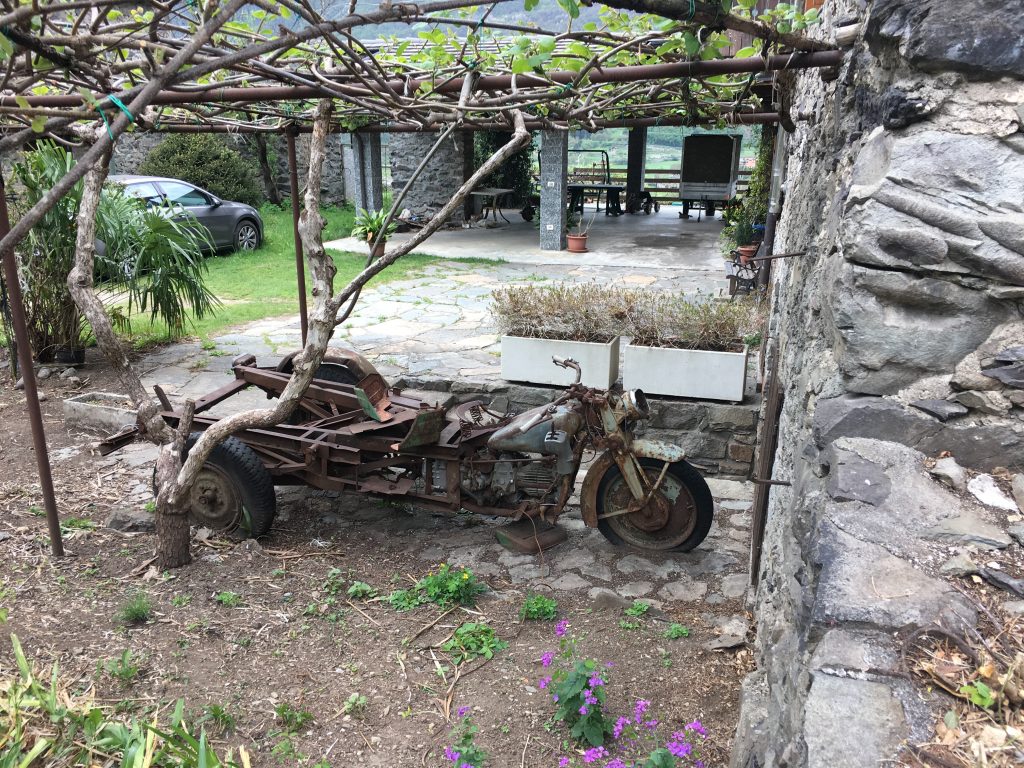 Paul was far more interested in this old bike

Cemmo is a much smaller area, the two large engraved rocks had been known about for centuries and documented since the early 19th century but the remainder of the site -a shallow bowl shaped depression used (they believe) for ceremonial activities – was only discovered when they started to excavate to create new football pitch. There must have been a few disappointed sportsmen when the football field was abandoned and the site was recreated including the planting of trees to try to screen off the nearby apartment blocks. The area may be small but there are a number of interesting information boards and it would actually be a better starting point than the Naquane park. 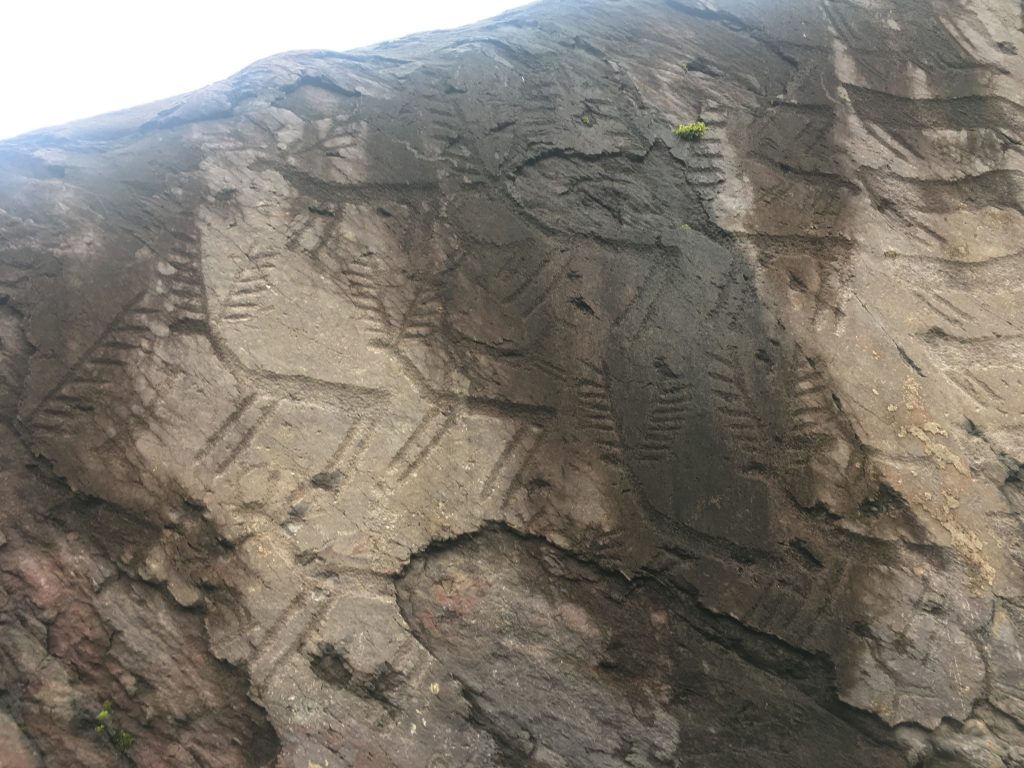 I love the antlers on the deer 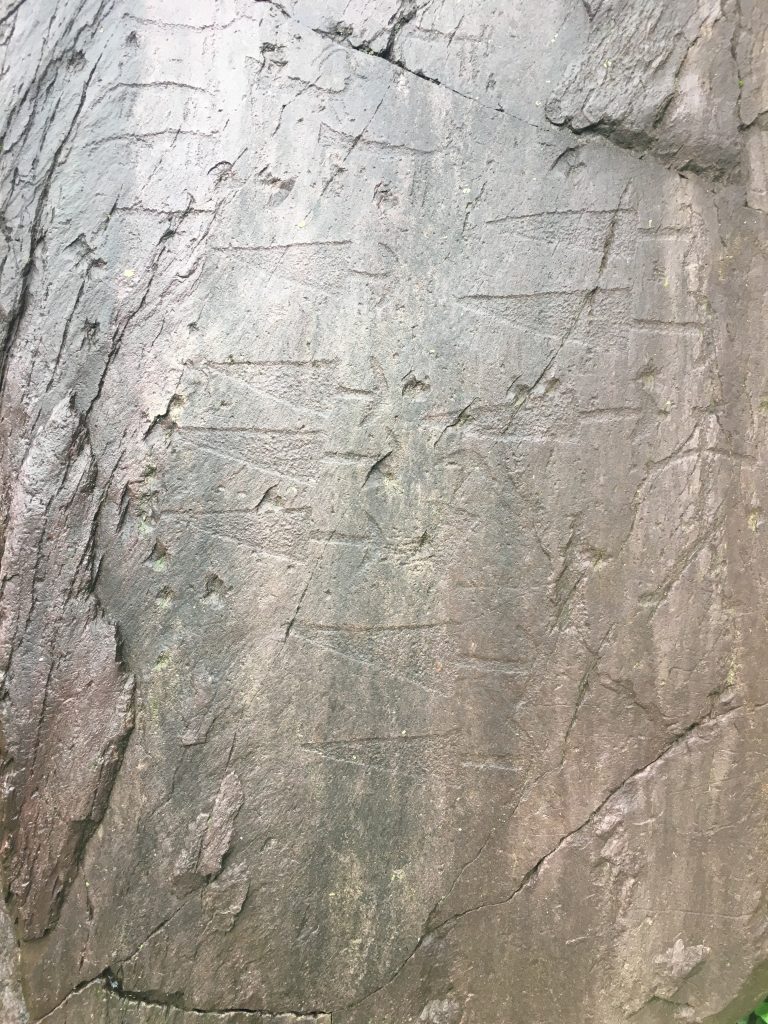 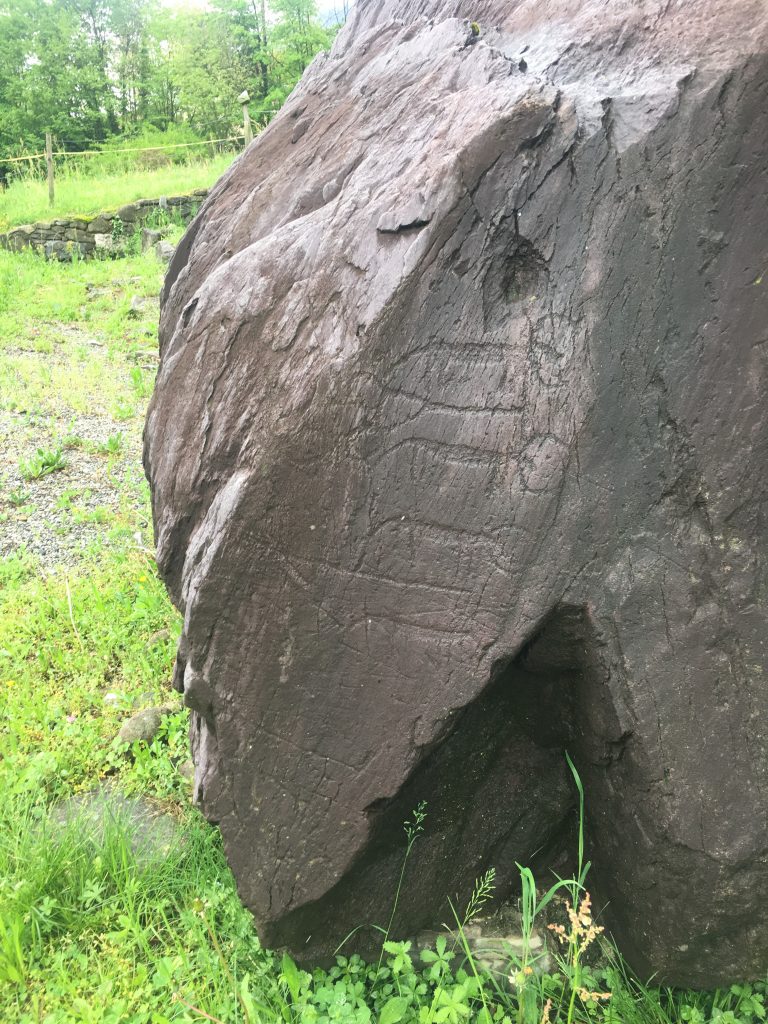 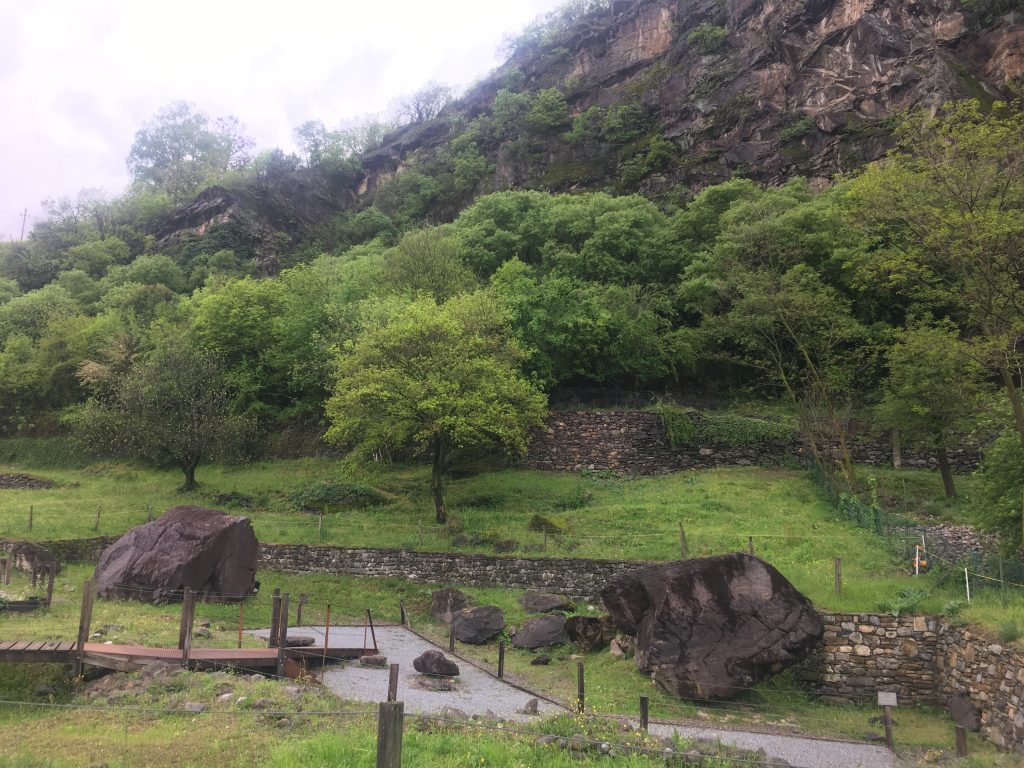 The Cemmo site under looming cliffs

There are many more sites of rock engravings in the valley, although these are probably the easiest to access. Part of me wanted to track them all down, but I worried that Paul’s interest would start to wane. It reminded me of a trip to Scotland when I was in my teens, I made my whole family follow me around (well Dad had to drive) to the sites of Celtic crosses, cysts and standing stones.

1 thought on “Ancient Graffito in the Val Camonica”