We woke up to a rainy day and a forecast of 24 hours more rain to come. However a bright ray of sunshine appeared in the forecast for the following day so we decided that we would drive somewhere we could base ourselves for a good long walk. We drove from Capo di Ponte up a side valley of the Val Camonica to the town of Borno. Just beyond Borno is a small ski area and we usually find we can park up in ski lift car parks in the shoulder season when they are not running.

Sure enough there was a large car park here, but it had ‘no motorhome’ signs all over it, possibly we would have ignored them but we had just been past a motorhome parking area at the Adventure park, so we turned around to investigate further.

This bit of motorhome parking was mostly on grass, but there was a big enough gravel patch to allow us to park up without any fear of sinking in the increasingly soggy grass. The adventure park was closed and the electricity bollards locked up. We rang one of the numbers on the sign and I think the response was ‘go ahead and park, we cant be bothered to come and get any money’, although it might have been ‘you can park there but you’ll need a tractor to drag you out’. I couldn’t really translate but it was definitely something in the affirmative. 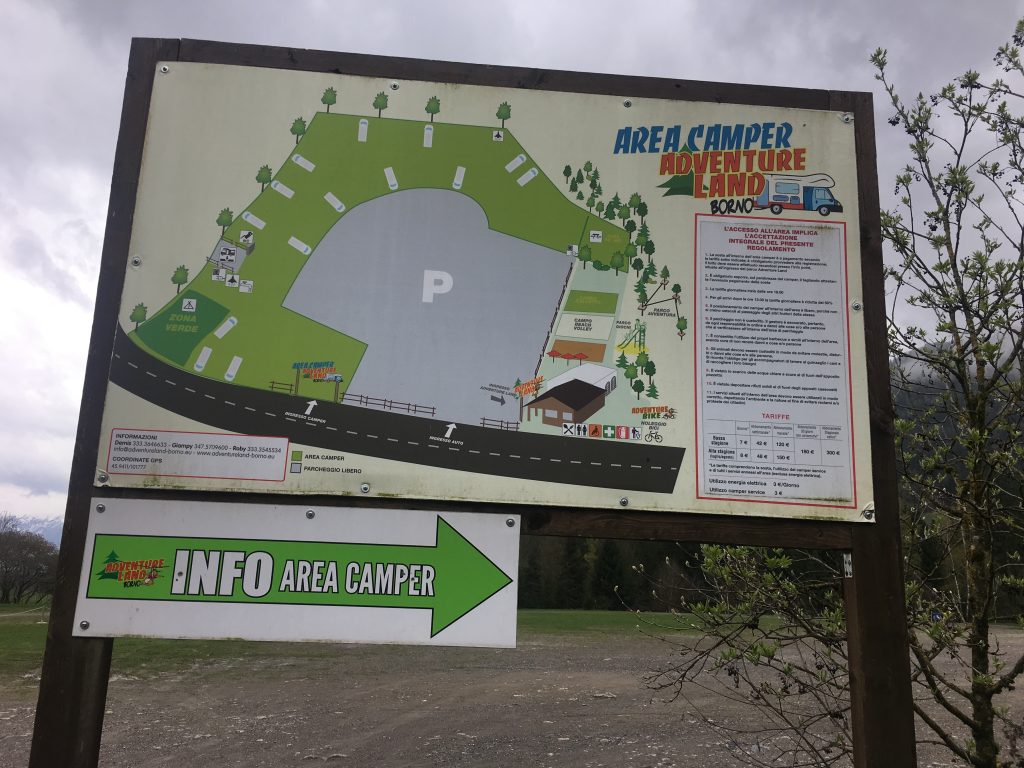 So we got ourselves a free and very peaceful parking spot where we whiled away the rest of the afternoon, taking short strolls whenever the rain looked like it was easing off and in between times reading and trying to plan our time in the Dolomites and a rough route home.

The following morning the weather looked better, a combination of blue skies and white fluffy clouds. the forecast was for rain in the afternoon though so we had to make an early start on our hike. The adventure park had a useful display of local footpaths and we decided we would do a round trip from Borno. The start of the walk was in the town itself so we drove back into the town and parked in the generous parking area near the roundabout. In fact this would probably make a nice free parking spot, especially if you parked down on one of the lower levels.

The walk was the pink route on the map, and was signposted at the bottom of the Via Palardo. We didn’t see any more pink signs on the way around but luckily it was quite easy to follow the red and white marks of the mountain routes of the CAI (Club Alpino Italiano) as we ascended through a collection of chalets and onto a track past a small holding with a family of noisy dogs. The ‘no authorised vehicles’ signs that adorned the track obvisouly had nothing to do with the off road vehicle and trail bikes that roared up behind us. The sound of the revving engines of the trail bikes accompanied us on our walk although that was happily our only encounter with the group. 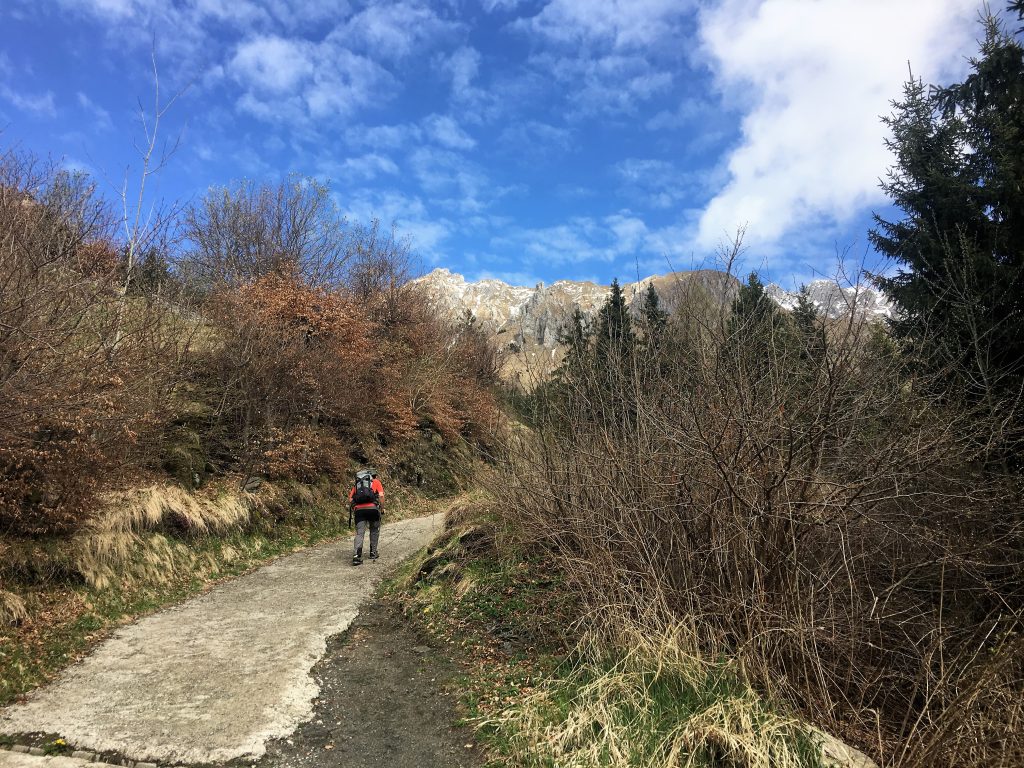 Walking uphill, while the skies were still blue

The path took us up through the forests and onto the open mountainside and refugio at the Malga Zumella (malga means ‘mountain pasture’) where a cross marked the coll (mountain pass) over to the next valley. Our picnic here was short lived as hail started falling. 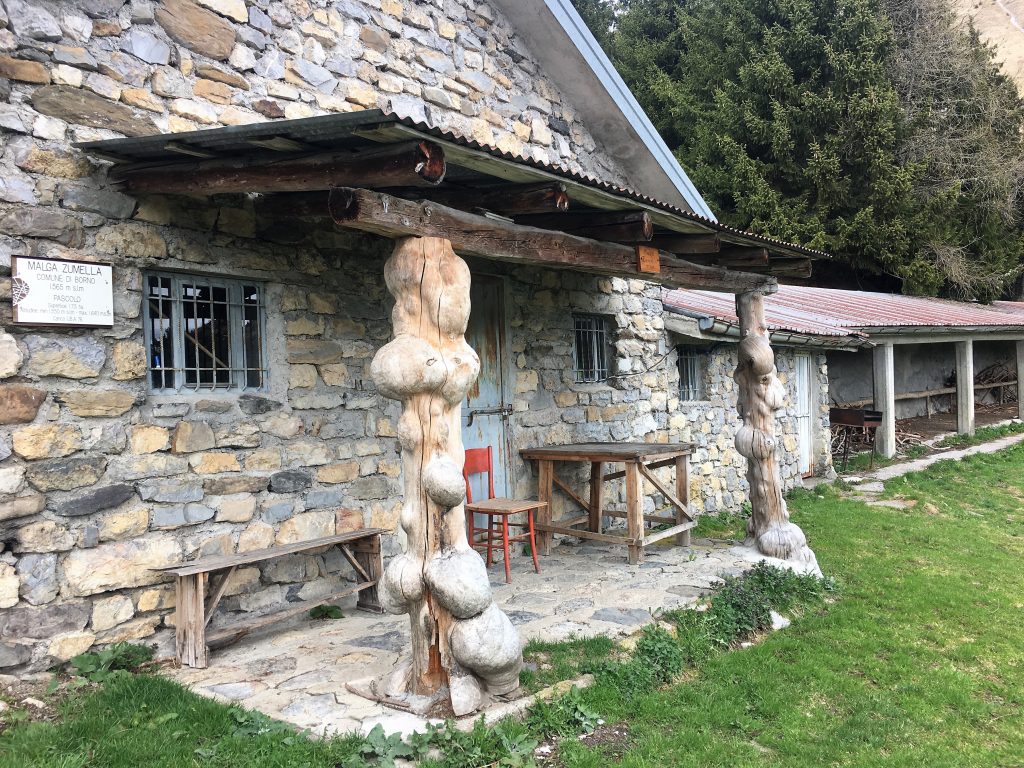 Malga Zumella and a rather interesting pillar supporting the porch 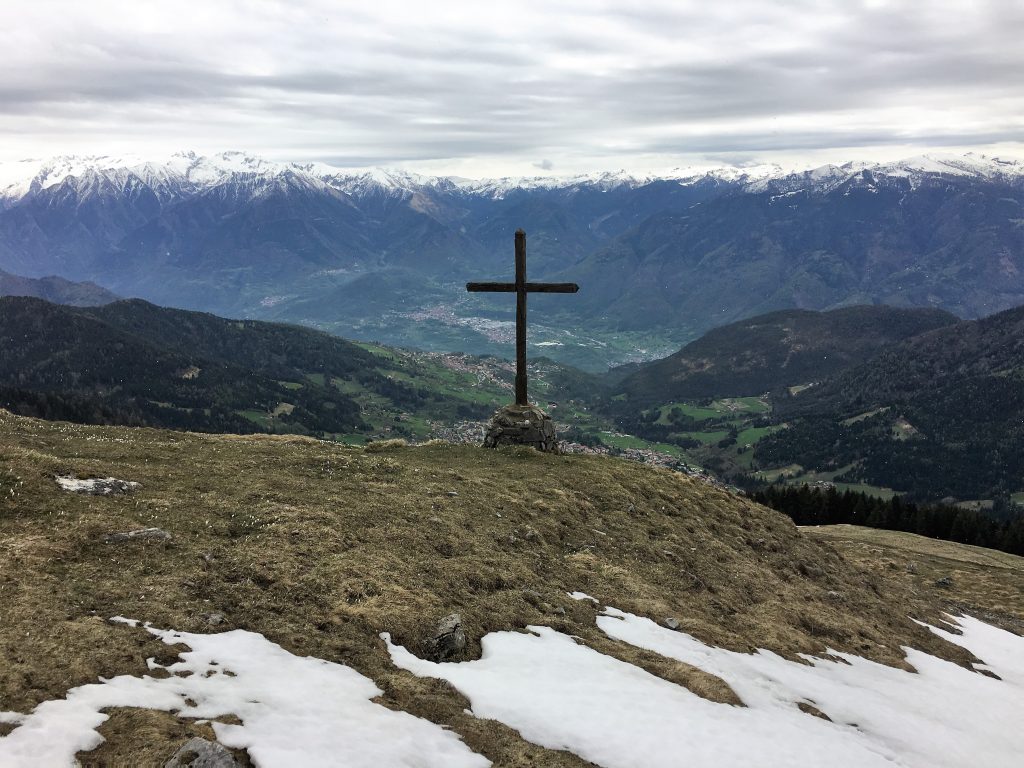 View from the San Fermo pass

We were turning right at the pass and heading under the cliffs of the Corno San Fermo mountain. We had the option of the high path or the lower track, and with snow chutes still visible on the side of the mountain we chose the safer of the two options, taking us to the Malga Moren where we were overlooked by the chapel (Chiesetta) of Malga Moren. From here it was an easy route following the signs to Borno, past the reservoir and quickly onto minor roads back to the town. 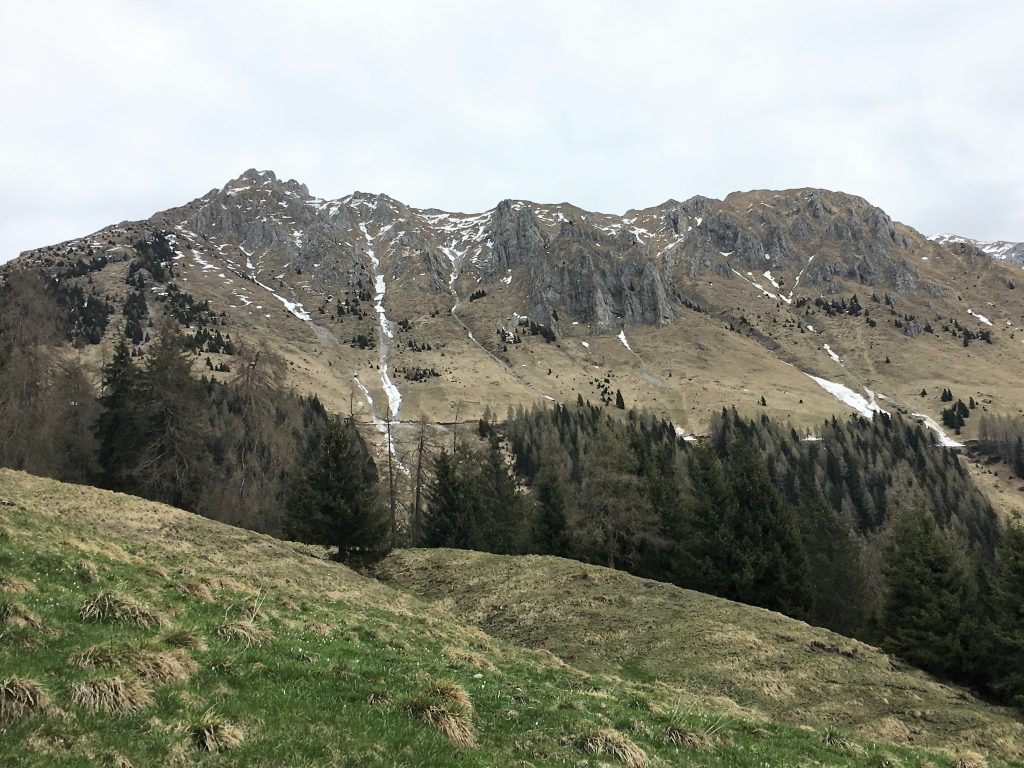 The flanks of the Corno di San Fermo mountain, you can just make out the two paths 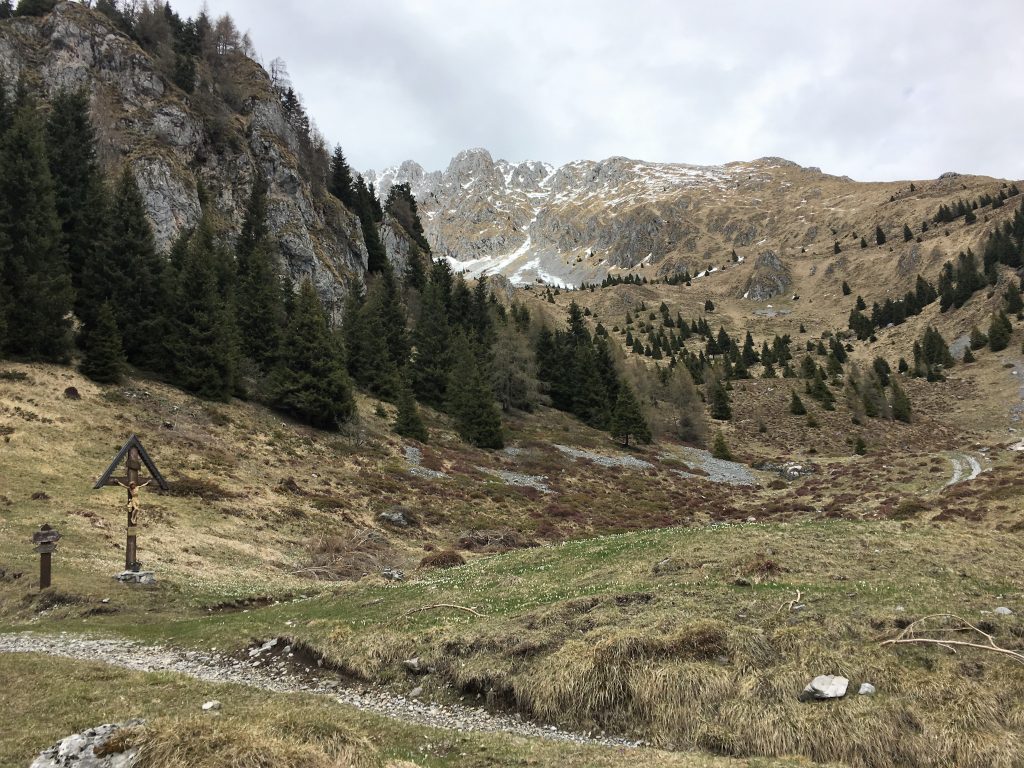 Turn off for the Chiesetta at Malga Moren 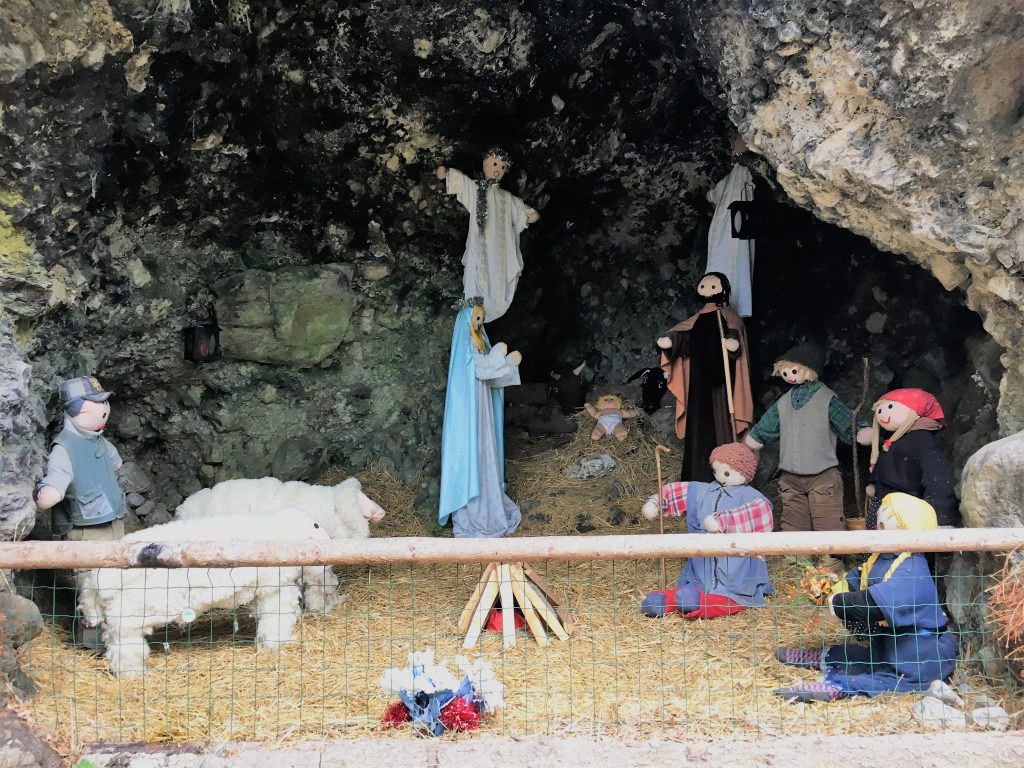 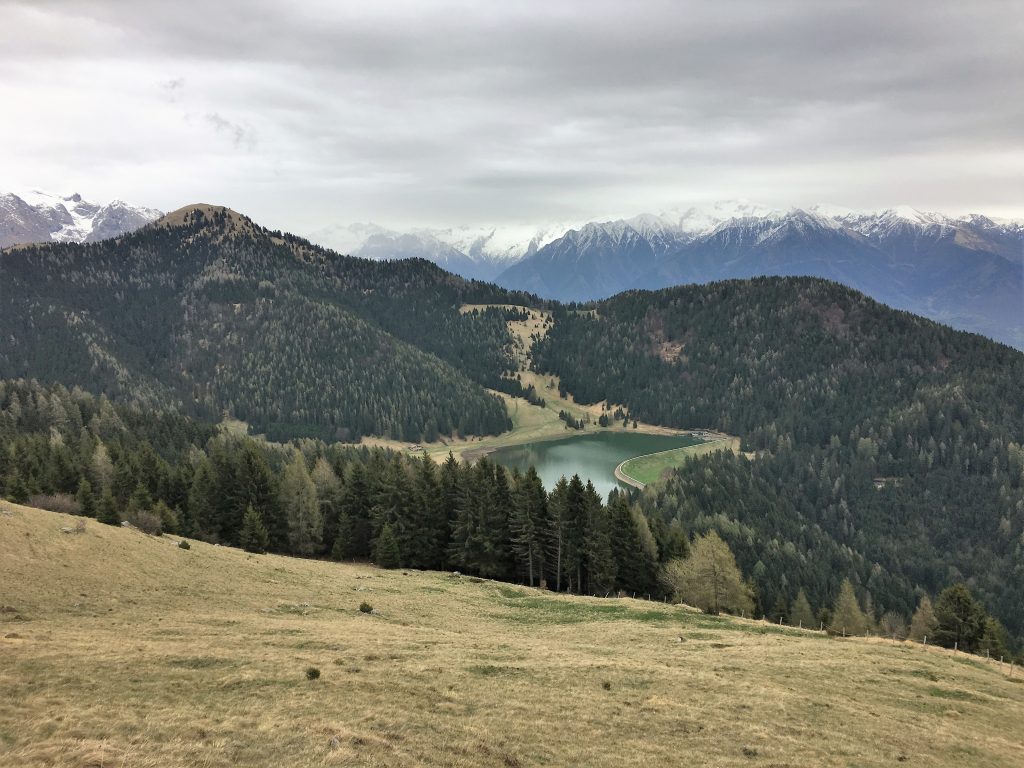 View of the reservoir with the Adamello mountains behind

That evening we drove down to the spa town of Darfo Boario Terme where there was a functional motorhome parking spot next to a large car park and very close to the supermarket. The town looked as though most buildings had been very modern at some point in the 80s. Now it all looked very dated. There are a few archaeological sites here but we were worn out from our walk so just had a wander around before cooking up some dinner. 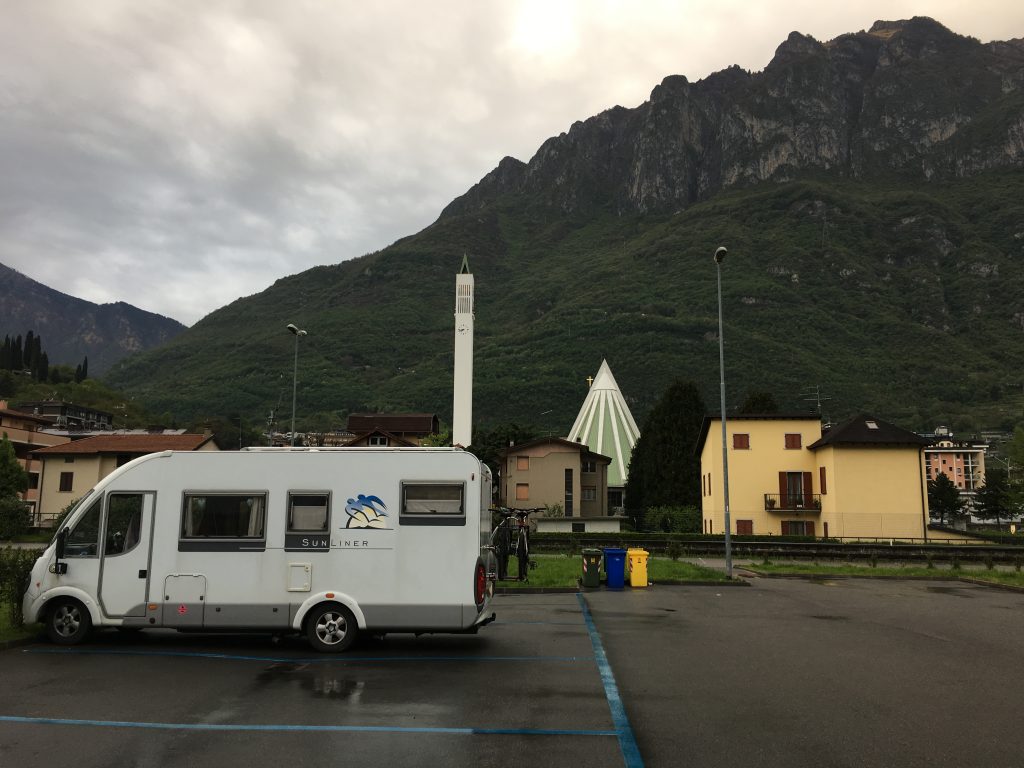 The parking at Darfo Boario Terme with the ‘modern’ church behind 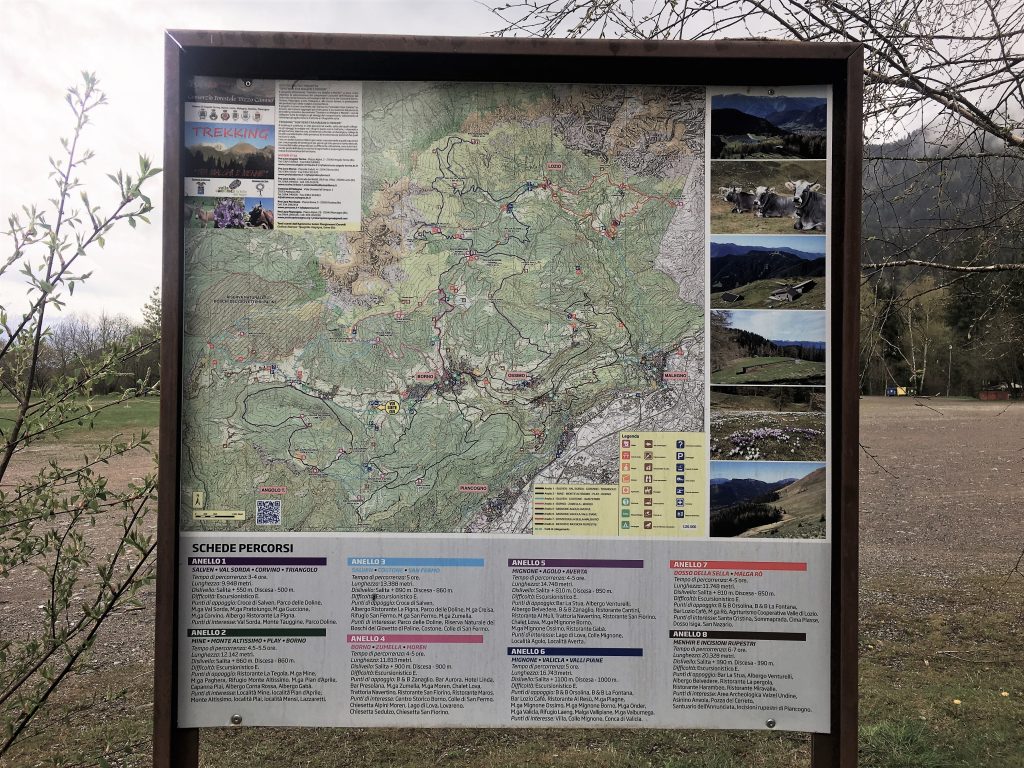 Map of local walks in Borno