Travelling in the mountains during ‘shoulder season’ can sometimes be highly frustrating. As the snow recedes, it leaves behind the debris of autumn storms and winter snowfall. The ground at lower levels becomes soggy with meltwater while at higher levels passes are still closed due to snow. The next few days involved a lovely lakeside stay bracketed by two days of frustrating mountain driving.

We started by trying to get up to the tiny ski resort at Gaver. The sat nav decided to try to take us over a pass which we quickly (fortunately) found was still closed. Instead google maps directed us around to the next valley, via the Lago d’Iseo. But sat nav was still insisting that we wouldn’t make it up to Gaver. It turned out this was due to a road width restriction which we ignored. But once we were up at Gaver we couldn’t find anywhere to park that was able to take Bertie’s bulk and weight. Either the parking was a quagmire or full of timber.

Our second failed mountain drive was a couple of days later. We tried to get up to the Lago di Malga Bissina and made it nearly all the way up through the valley (including one traffic light controlled diversion up a steep and narrow country lane) before finding a police car blocking the road. The officer twirled his finger and we cringed with disappointment. A several point turn later and we were heading back downhill. We found ourselves a spot further down the valley where we parked up and got the mountain bikes out to follow a signposted track, but two or three fallen trees later we gave up, having only managed to cover about 2km. At that point Paul declared that the mountains obviously had something against us. We drove down to the valley in a bit of a huff to rethink our options. 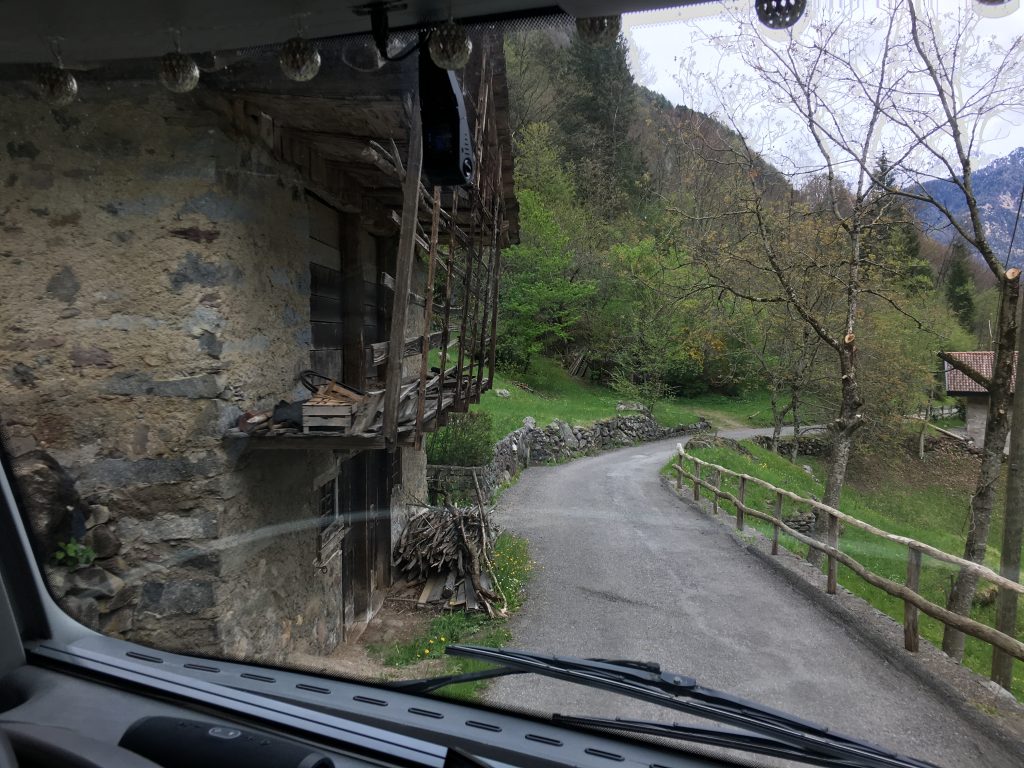 Squeezing through the diversion 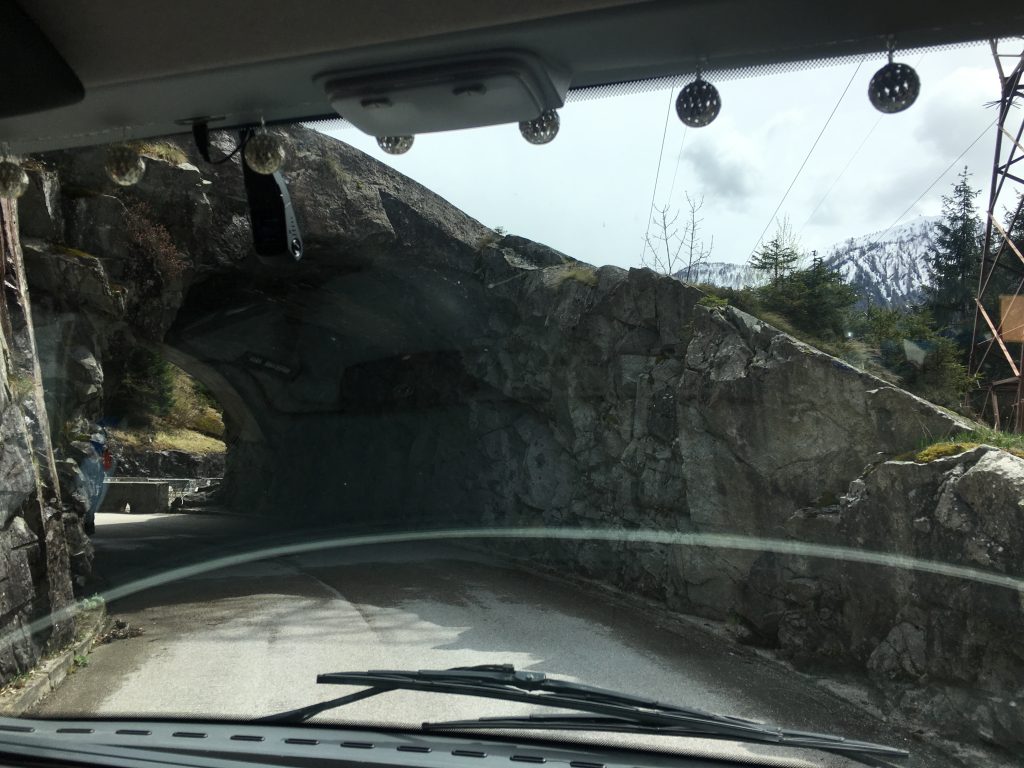 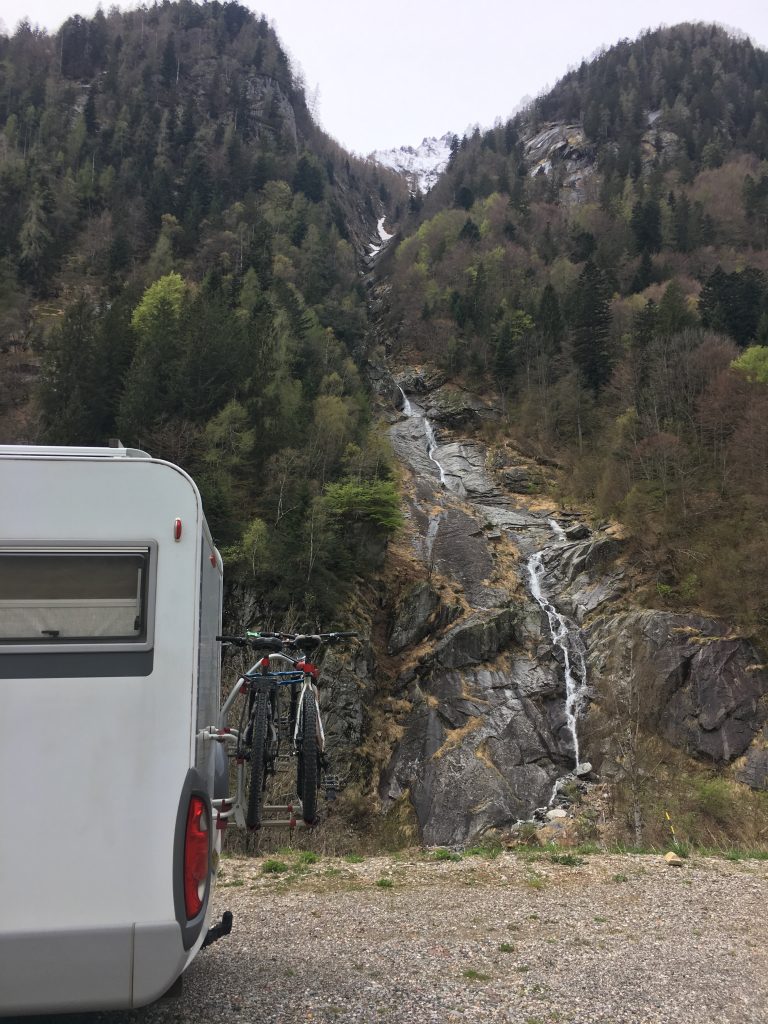 The parking spot we abandoned

In between these two failed forays into the hills we managed to find a spot on the shores of Lago d’Idro that ticked the boxes for a few days of relaxation. With tempers already quite frayed we nearly missed our opportunity to park at this spot; sat nav directed us down one impossible route and google maps sent us down another. We fell back on the old fashioned method of reading the road signs. The parking was clearly signposted and the narrow looking roads became a one way system that took us easily to Idroland.

Idroland must have been a bit of a failed venture. There is a small complex of buildings here that speak of a watersports venture, but now the only occupiers are a parapenting company and a host of swallows vying with the local bats for the evening bug feast. Sadly the shower and toilet block has been ripped out, leaving just cracked tiles and nubs of pipework when you peer inside the buildings, but there is a working fresh water and black waste disposal unit on the back of the building. And there is a large car park with diagonal bays where a motorhome will fit with it’s back end overhanging the dividing greenery. 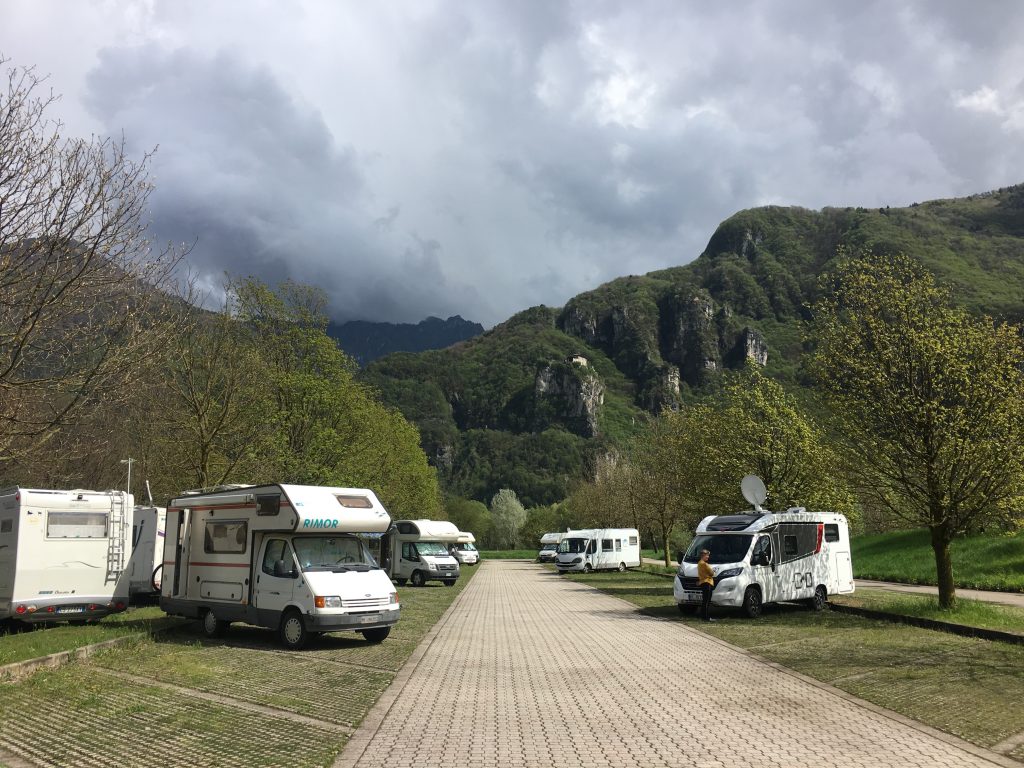 We parked up and enjoyed the spectacle of a late afternoon thunderstorm before exploring the local area. The parapenters had packed their wings away while the storm blew through, but they were swiftly back out again, practising at the lake edge and getting into their mini bus to drive up to their launch point. The following day one of them was blown off course as they came in to land and ended up in a tree which caused a lot of activity. The poor guy must have been mortified to have an audience to his embarrassment.

This part of the valley is a nature reserve where efforts have been made to reintroduce the wetlands that once would have typified the whole valley. At the edge of the main lake, the ‘Lake of The Grebes’ is an area enclosed by fencing where the wetland habitat supports a noisy colony of grebes. We spent a lot of time watching them through the hatches in the fence, fascinated by the mother grebes on the nest constantly rotating the eggs and adjusting their position. We also saw a species of duck we dont think we’ve seen before – the red crested pochard. In the water were a lot of small fish and some very large carp swimming lazily around the reeds. 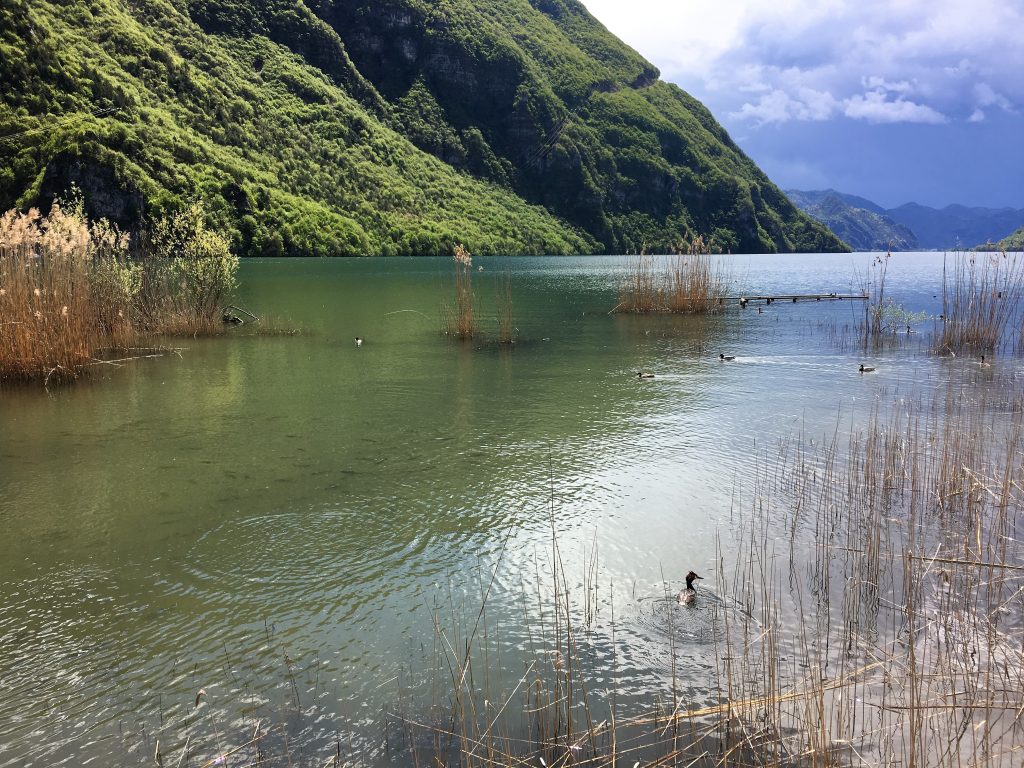 Fish and fowl in the nature reserve 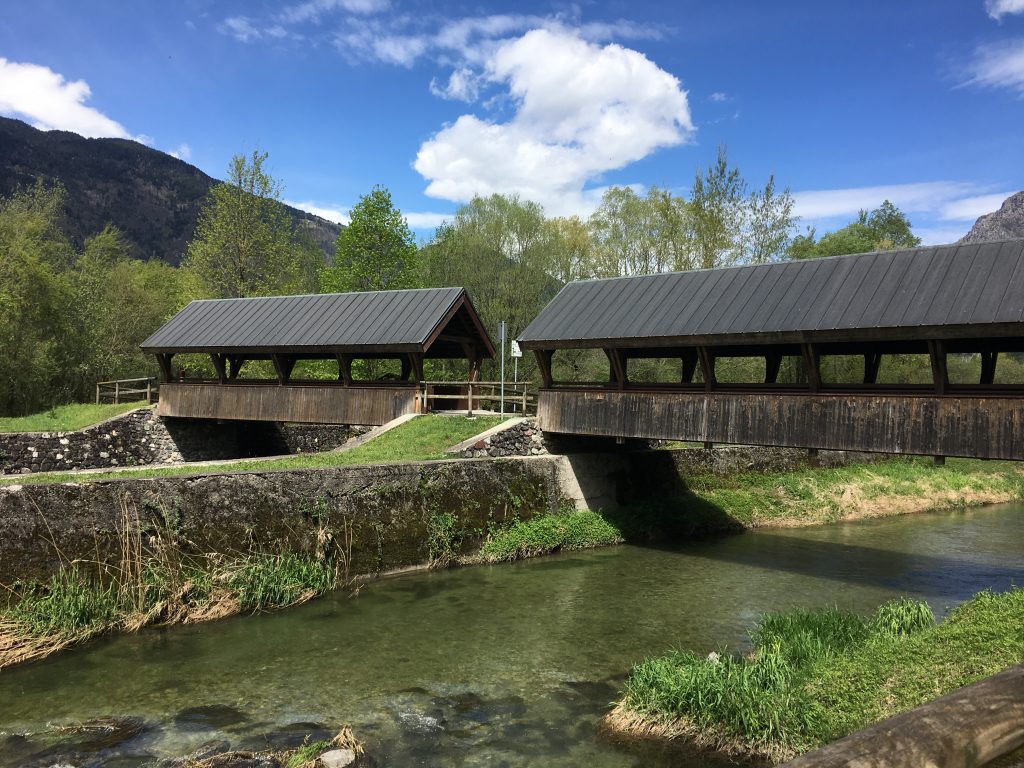 Bridges in the nature reserve

There is a nice easy cycle route up the valley, mostly off road but with a couple of on road sections, with a couple of offshoots into side valleys. We spent one pleasant morning cycling around as far as we could, following the river and watching the fishermen standing in mid stream in their camouflage and waders. Many of them were staying in motorhomes at our parking area but we never saw anyone return with any fish. 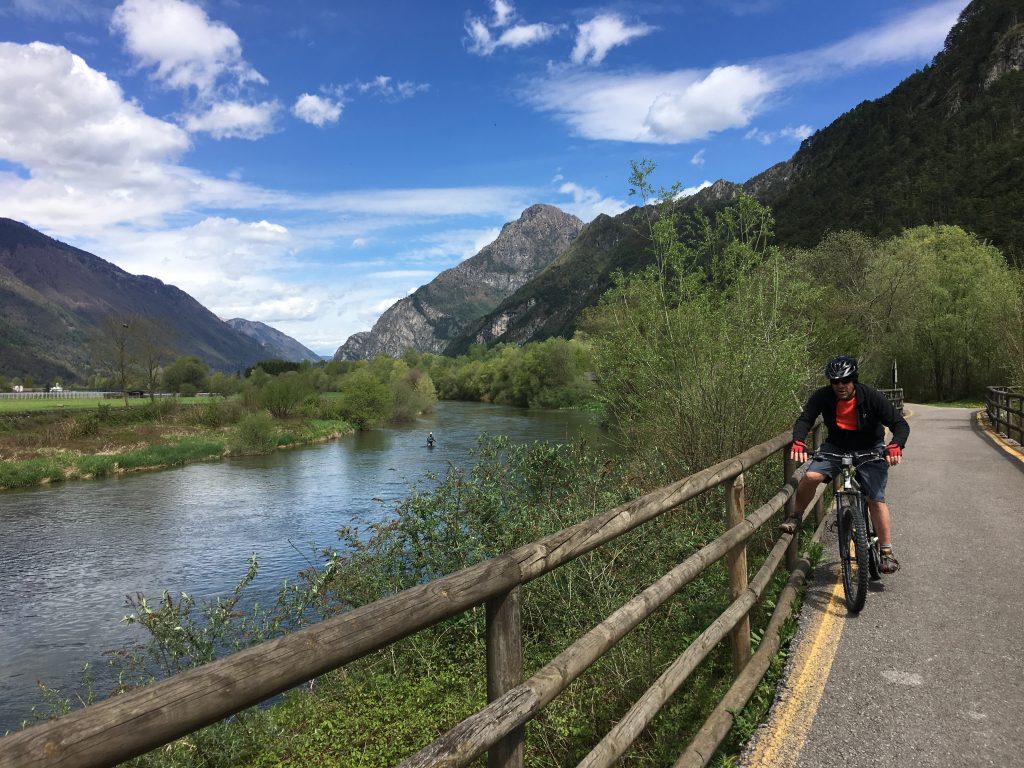 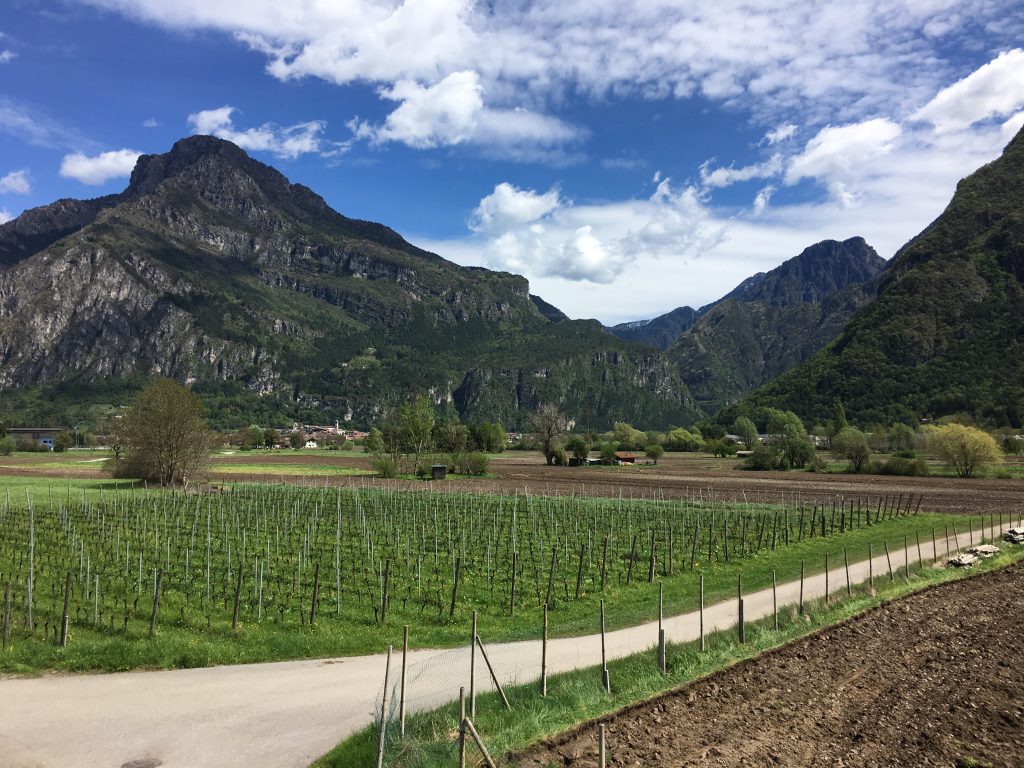 Vineyards and farmers fields in the fertile valley 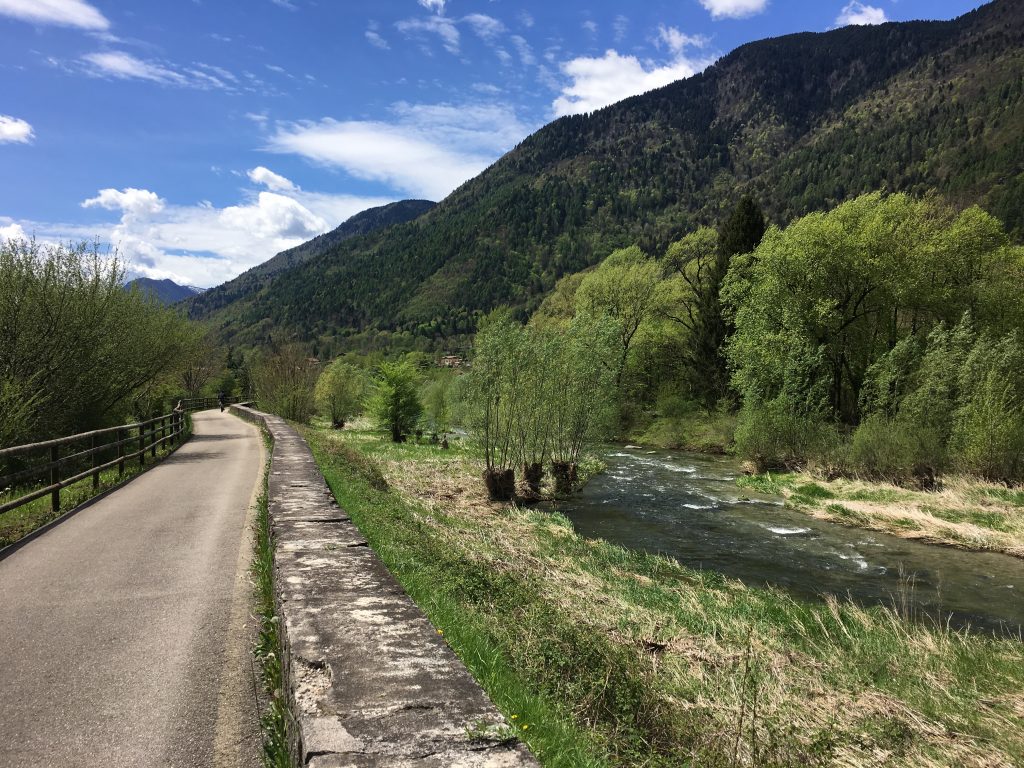 Views of the river 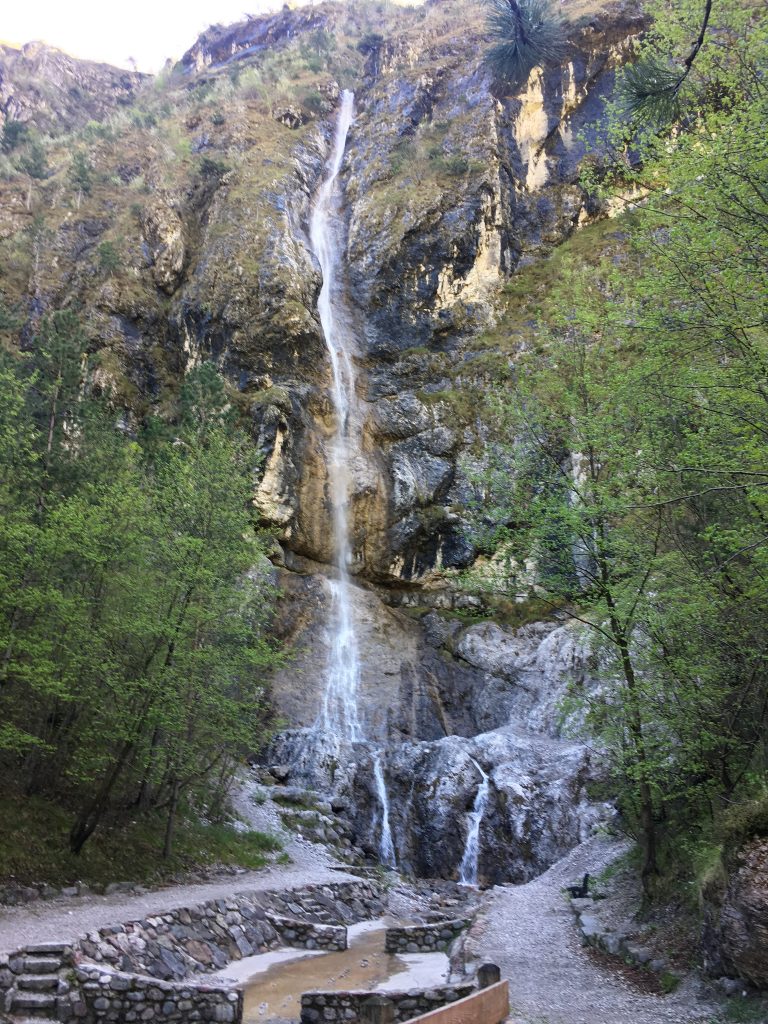 Waterfall along the bike route

Up on the side of the hill above the parking area is the castle of San Giovanni. A brisk walk up the wooded slopes brings you to this tiny castle that is free to enter, maintained by the local community. It has a small display detailing the history of the castle and an interesting photo exhibition about the charcoal burners of Bondone. Until recently the manufacture of charcoal was the main industry in this part of the valley and it’s fascinating to see the photos of families who were probably the last generation of charcoal burners. It’s also worth a visit to the village of Bondone where you can stroll through the tiny medieval streets, now gentrified and tourist friendly. 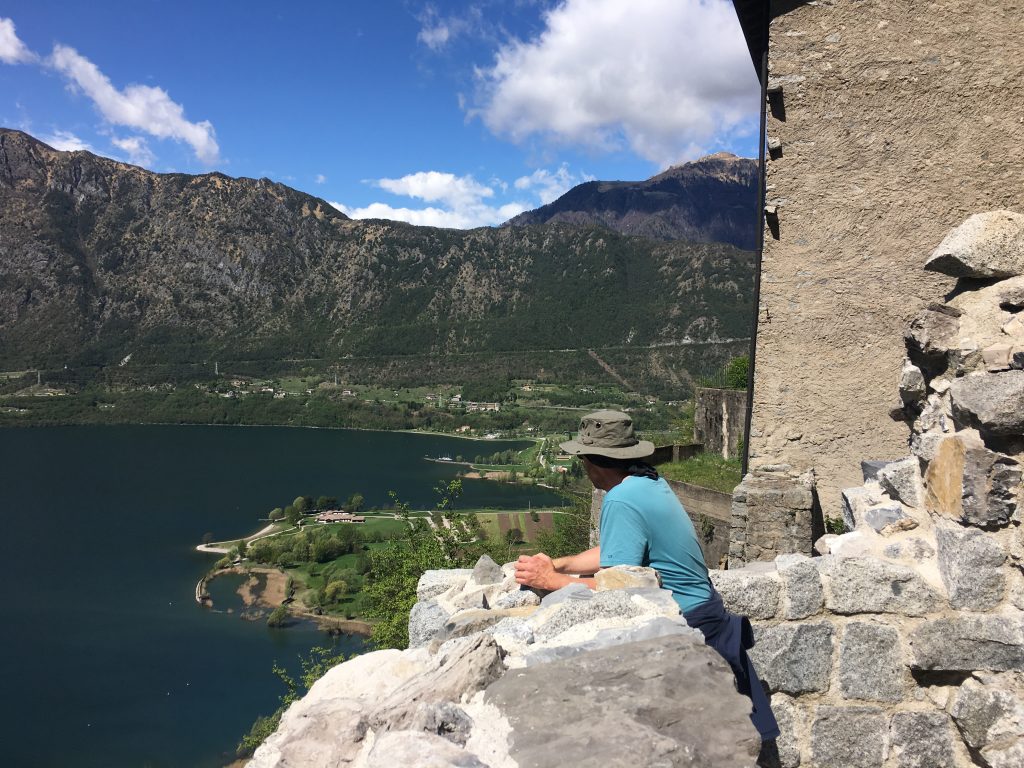 There were far reaching views from the castle 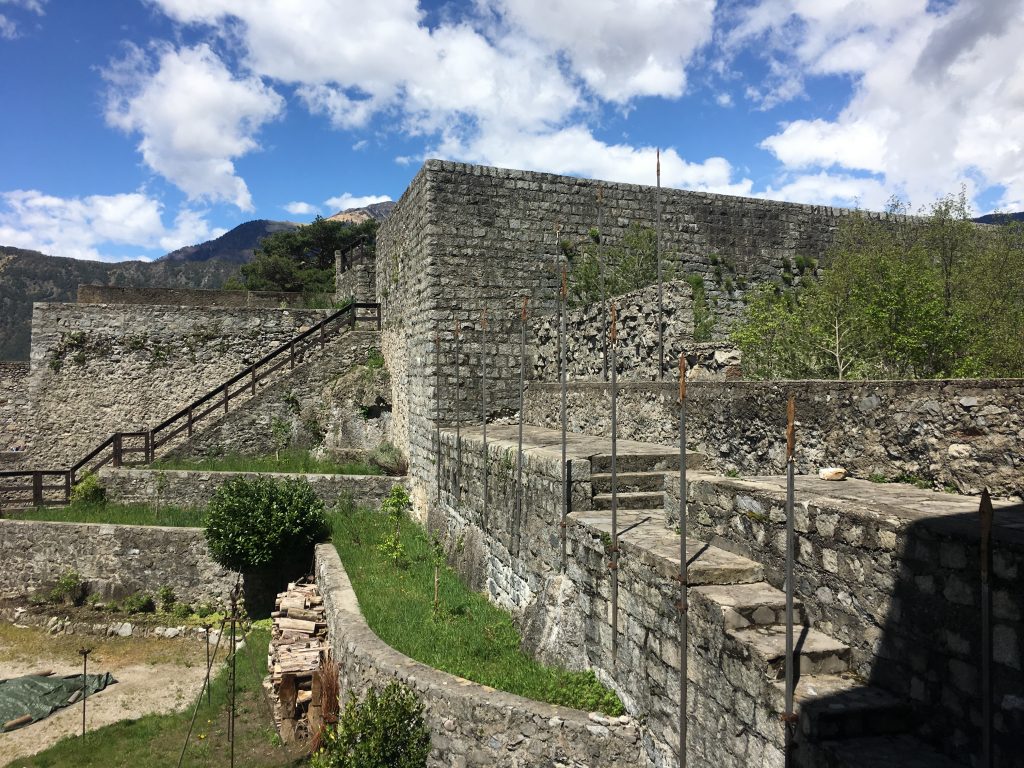 If we’d had a bit more time there was plenty of walking and an easy via ferrata along the steep eastern side of the lake. Bus routes go to other locations in the valley where parking is not particularly motorhome friendly. In contrast to our mountain frustrations, visiting the Italian Lakes in shoulder season meant that we got the area almost to ourselves, without the hoards of peak season tourists.