Passo Tonale didn’t fill us with enthusiasm when we turned up. The previous couple of days notwithstanding, we just found the layout of the resort – hotels and apartment blocks along the one main street – uninspiringly utilitarian. What we could see of the ski lifts mirrored the town, a progression of lifts all lined up along the same road. There were several British coaches in the coach parking, each seemingly carrying school groups and the sight and sound of teenagers wandering the streets was a little disconcerting, it’s easy to dismiss poor behaviour as mere high spirits when you cant understand the language being used.

So the following morning, when we woke up to grey skies and fog over the peaks, I was ready to bury my head under the duvet and have a long lie in. Ten minutes later though and the sun was burning through the mist. We quickly scrambled into our skiing gear and scarfed down some breakfast. If it was going to be a skiing day we wanted to beat the groups onto the slopes. In record time we had bought tickets and were juddering down the barely tracked and rather hard corduroy. We managed to ski most of the Passo Tonale area that day, stopping in mid afternoon when the cloud started to clump back together and threaten snow.

The following morning was similar and we ventured out again, but another skier crossing the back of my skis left me with a painfully twisted knee, exacerbating a previous twist from a fall in Cervinia. I decided to call it a day pretty early on. I left Paul to do a bit of skiing on his own and had a wander around town, taking in the monument and ossuary for soldiers who lost their lives here during WW1. 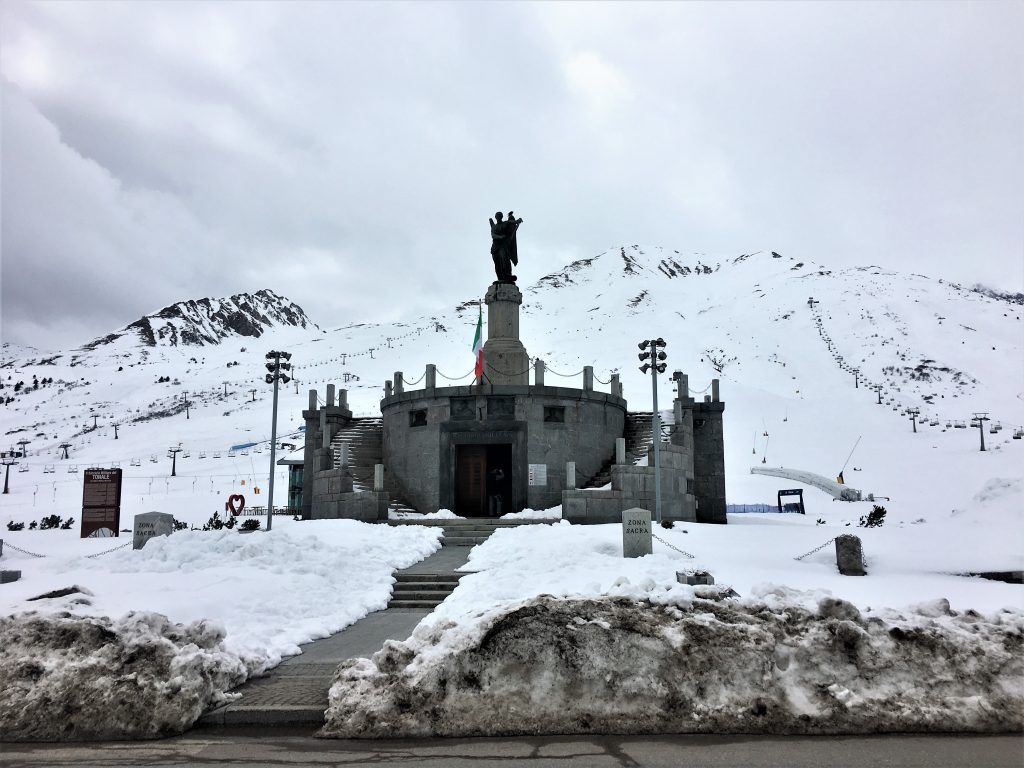 The Memorial for the fallen in the White War

Passo Tonale is in the Dolomites, at the northern edge of a range of mountains called the Ademello. The whole area has an interesting history due to it’s strategic importance during WW1 when the frontier between Italy and the Austro-Hungarian empire ran through these mountains. As always when you start looking into it, history is a complex thing. Although the Hapsburg Empire and their German allies are seen as the aggressor in WW1, it was Italy’s decision to abandon their treaty with the Hapsburg empire and pursue their nationalist ambition to ‘regain’ land in the north. Once they declared war it meant there was a new front in the Dolomite mountains. The Italian forces – the Alpini – and their foes contested the border. On both sides defences were constructed to support a series of hard fought battles and skirmishes in the passes and across the high ranges. Soldiers had to endure extreme cold, snow and ice, avalanches and rockfalls (man made and natural). It became known as the ‘White War’ and over a million soldiers on both sides lost their lives along this border. When the war was over Italy did gain the lands of the Southern Tyrol, but many people here still feel divided loyalties. The monument in Passo Tonale is one of several that line the old border and is moving in it’s own right, but it’s worth reading more about the history of the conflict to get a sense of just how futile the loss of life was.

That evening it started snowing, we knew that about 20cm was forecast to fall overnight and then the day was due to clear. We woke up to find a good layer of snow carpeting the parking area. The wind was blowing and the snow was drifting into peaks and troughs around the vans that had turned up the previous day. The snow resolutely failed to obey the forecasters and continued to fall, It’s difficult to know how much there was as the wind was blowing it around so much, but it’s the first time this winter that we haven’t at least had some clear spells between the snow fall. All in all it was an unpleasant day and we didn’t want to venture outside so we stayed cosy and lazy in the van, preparing ourselves for the following day. 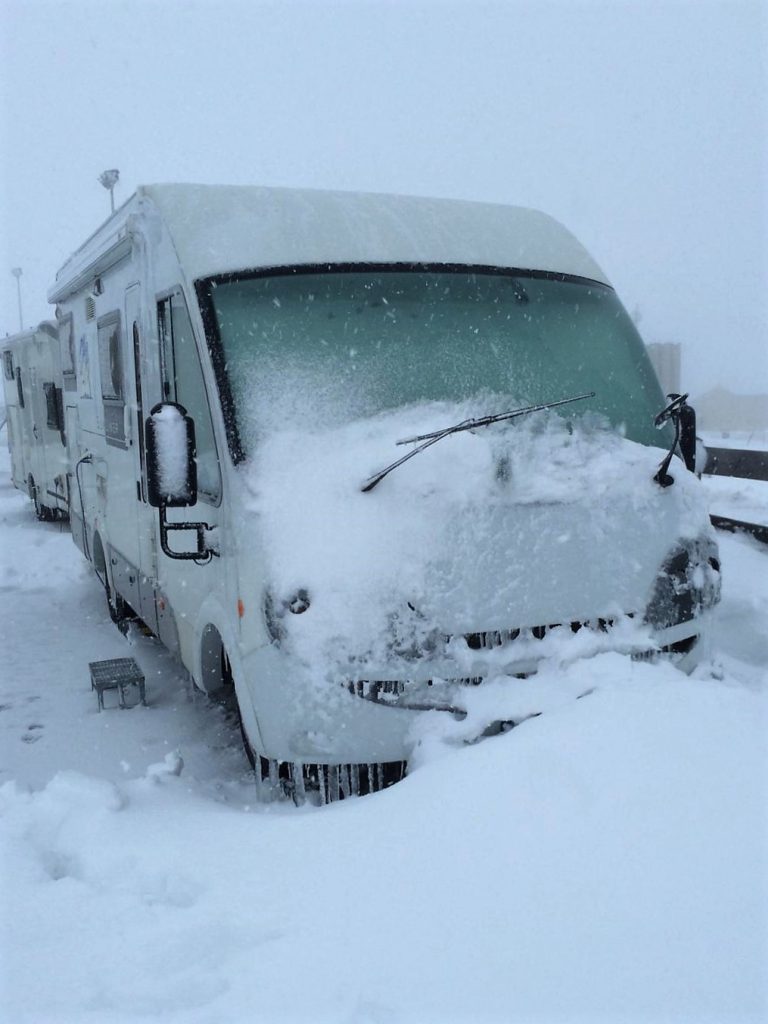 An early dash to the slopes saw us swishing down silky soft pistes. Slightly over confident about the conditions we decided to ski all the way down to Ponte di Legno at lunch time, but it really wasn’t worth it (too slushy or icy depending on the orientation of the slopes) and by the time we had ascended the incredibly long bubble back up to Passo Tonale everything was turning to slush again. We decided to stop while the memories of the morning were still fresh in our minds. 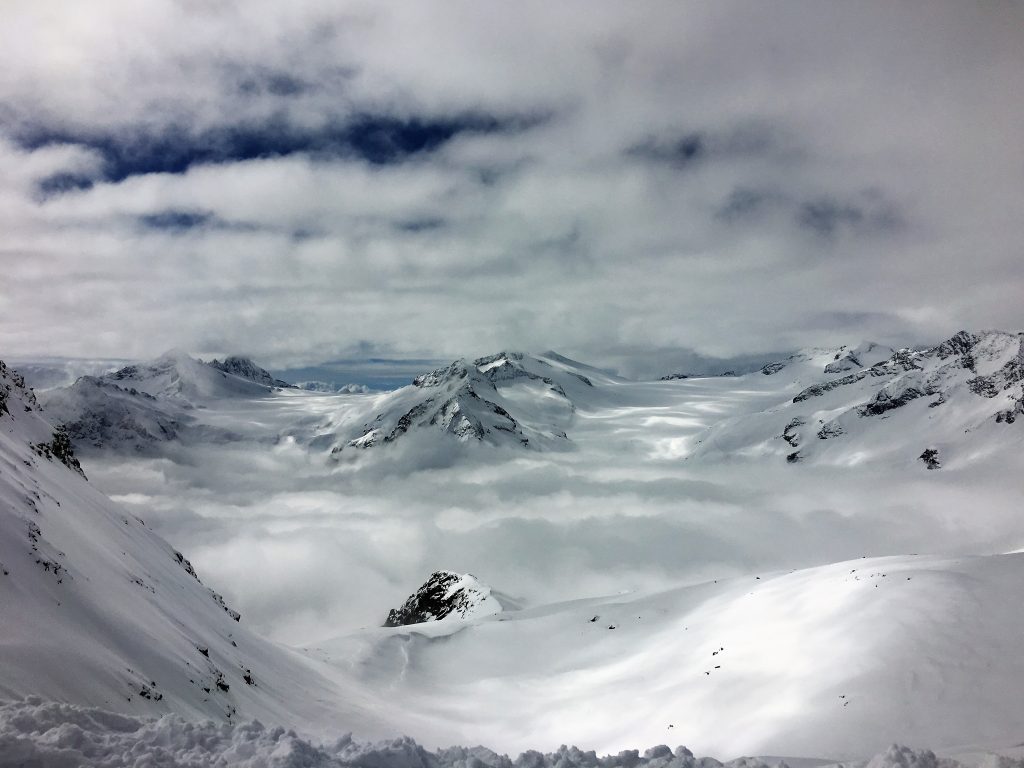 Moody views from the Presena glacier

The sosta in Passo Tonale is very well constructed, if a little complex in the way that everything is charged.

You can either park Internally to the sosta (ie drive through the barrier), and have access to electricity, services and toilets included in the price (showers are extra), or you can park Externally (ie outside the barrier)  for a lower price but all other facilities are charged extra. See photo for the prices. 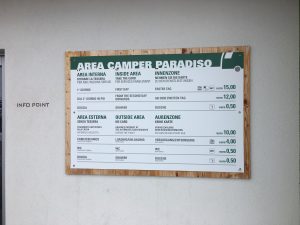 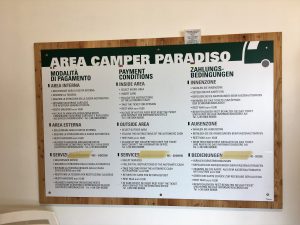 Once we got our heads around the Internal pricing system it was very easy. the card that is issued at the barrier is your access to everything. Hold it on the sensors for about 5 seconds to either open the shutters on the services block (an amazing drive in services area with two bays), open the bathroom doors, or activate the showers. 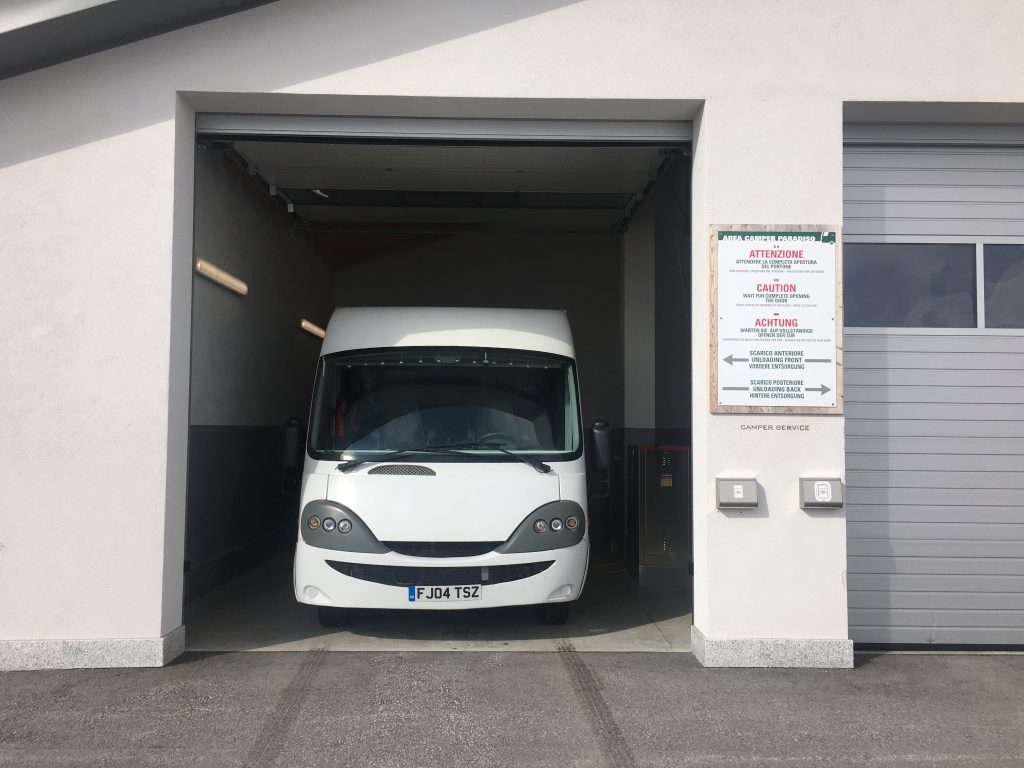 Bertie in the services hangar

If you are staying Externally then you need to get a card from the machine in the services building. A deposit has to be paid. As we didn’t use this I cant explain how it works, take google translate along to help as there are a few helpful additional notices that are just in Italian.

There are also sostas in Ponte di Legno and Temu, they may be worth investigating earlier in the season when you can ski down to these areas.

The only option is to walk. Its about 200m level walk to the slopes.

Passo Tonale is pretty much a purpose built resort village/town. There are a couple of supermarkets opposite each other down the main street, plus plenty of the usual ski rental places, restaurants and cafes.

Lift passes are credit card style contactless passes and you have to pay €5 per person for the card. You get this deposit refunded if you return the card to the ticket offices.
You can pay an additional €3/person per day for insurance to cover you for rescue from the slopes in case of an accident (not any other medical costs though so you still need proper insurance).

The main area of Passo Tonale is a line of lifts servicing a set of slopes that all sort of merge into one. However if you look at either end of this area there are a lifts that take you into side valleys that offer a little more interest and are a bit more sheltered from the sun. Opposite this area is the Paradiso series of cable cars that take you up to the highest point (the Presena glacier). Skiing here is mostly aimed at off piste freeride and the pisted runs are a little less interesting although the black run down to the bottom is fun. The highest point is around 3000m so the snow quality remains good but that does mean it gets crowded on spring days. 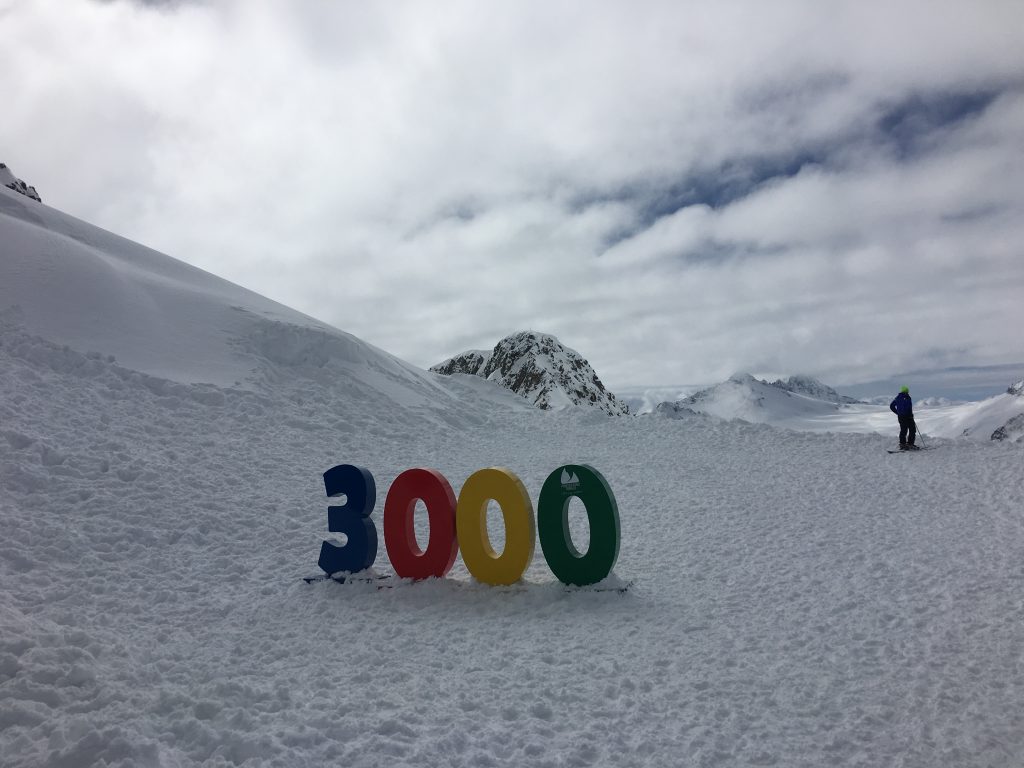 If the conditions allow you can ski down to Ponte di Legno and Temu where the runs are between trees for a bit of variety. This is probably nice if it’s not either sheet ice or slush. There is a boarder cross run and some jumps.

The slopes offer a good variety of blues and reds and it seems like a nice resort for a mixed group including beginners.

There are a number of ski touring/snowshoe trails and more information can be obtained from the tourist office. We didn’t get out for a proper walk while we were there.