After a decent fall of snow in Passo Tonale we were torn about our next steps. Should we plough on into the Dolomites? The ski season was over in most of the Dolomite resorts with just a few high lifts remaining in operation until Easter, but skiing in the Dolomites was one of our aims for this year. Alternatively we could backtrack a little and head to Livigno where we know that the lifts are staying open until May, the snow is pretty good and the lift prices are cheap.

In the end it was Livigno that won, despite it meaning a drive back across the Aprica pass which was not Paul’s favourite road – it’s one of those roads that is used by lorries and logging trucks but is just slightly too narrow for two large vehicles to pass without at least one of them (it’s usually us losing that game of chicken) slowing to a crawl.

Our plan was to head for Livigno and peruse the campsites, picking the one that seemed best for us. Last year we were here in the most frigid temperatures we have ever experienced (apparently -25 degrees, but the LCD in our thermometer froze so we were never sure), this year it looked like it would be much more clement so we didn’t need much in the way of the creature comforts offered by a campsite, just somewhere cheap.

In the end we didn’t make it to the town of Livigno, as we were driving along I spotted a sosta on Google maps, high up above Livigno just outside the village of Trepalle. We drove in to check it out and didn’t drive out again until four days later. It didn’t have anything particularly exciting, just water and waste disposal and a good position directly over the road from one of the chairlifts. 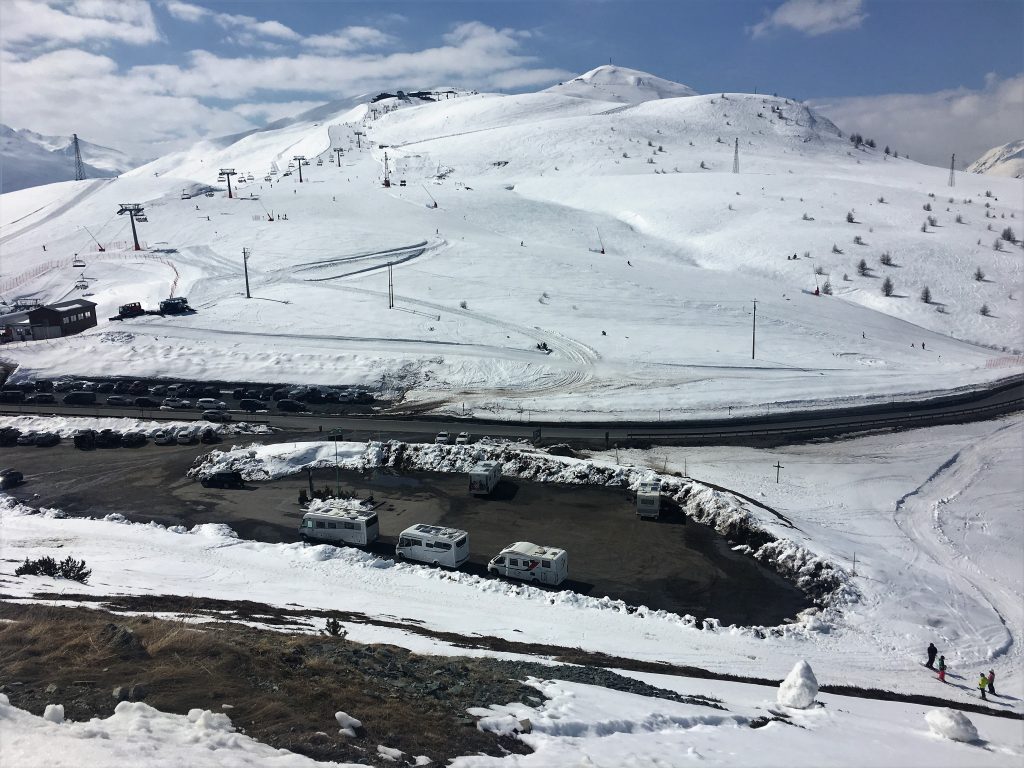 The sosta at Trepalle, you can see the ski lift opposite and also the track behind the sosta that links to the blue run.

Livigno offers dirt cheap lift tickets from early April until the end of their season, so we indulged ourselves with a couple of days skiing, like Cervinia it was yet another opportunity to compare our confidence and skills with previous years and yet again we were pleased with ourselves as we zoomed down black runs with enthusiasm if not with grace.

We treated ourselves to a late lunch in a local restaurant to celebrate what we expected to be our last day of skiing this season. A major carb fest of local grub with Bresaola, Pizzoccheri (buckwheat pasta with a cheese, greens and diced potato sauce), plus Sciatt – tiny deep fried cheese fritters in a buckwheat flour batter. It’s difficult to imagine a better way of replenishing calories unless it’s followed with Tiramasu or Strudel (which it was).

While on the lifts we saw something we haven’t spotted before, a Ptarmigan in it’s winter plumage. In fact I almost didn’t see it, I’m not the most observant of people and my eyesight isn’t the best (even corrected, as I currently have a contact lens prescription that tries to compromise between my short sightedness and the long sightedness of incipient old age). Eventually it moved and I caught a glimpse of it before the chair lift took us out of view. It was accompanied by a dark feathered ptarmigan and it was only when reading up a bit later that we found out the male of the species takes on its summer plumage earlier than the female, allowing it to act as a decoy for predators while the female is safely camouflaged on the nest.

We also had an encounter of the feathered kind when we were on a snowshoe walk the following day. We had enjoyed a couple of days skiing in Livigno, but it was very busy with German, Czech and Polish (I think) visitors who were on their Easter vacations, so we decided to take a Good Friday snowshoe walk up to the viewpoint behind the sosta for a bit of solitude. As we walked back from the viewpoint along the ridge a large shadow crossed our paths and looking up we saw what we thought was a Lammergeier (Bearded Vulture); with a distinctive russet chest and wedge shaped tail it was unlikely to be anything else but our birding book told us there were no Lammergeier in the Italian Alps. Google came to our rescue though and we found out that there are somewhere between 12 and 15 breeding pairs in the Stelvio national park after a recent reintroduction programme. 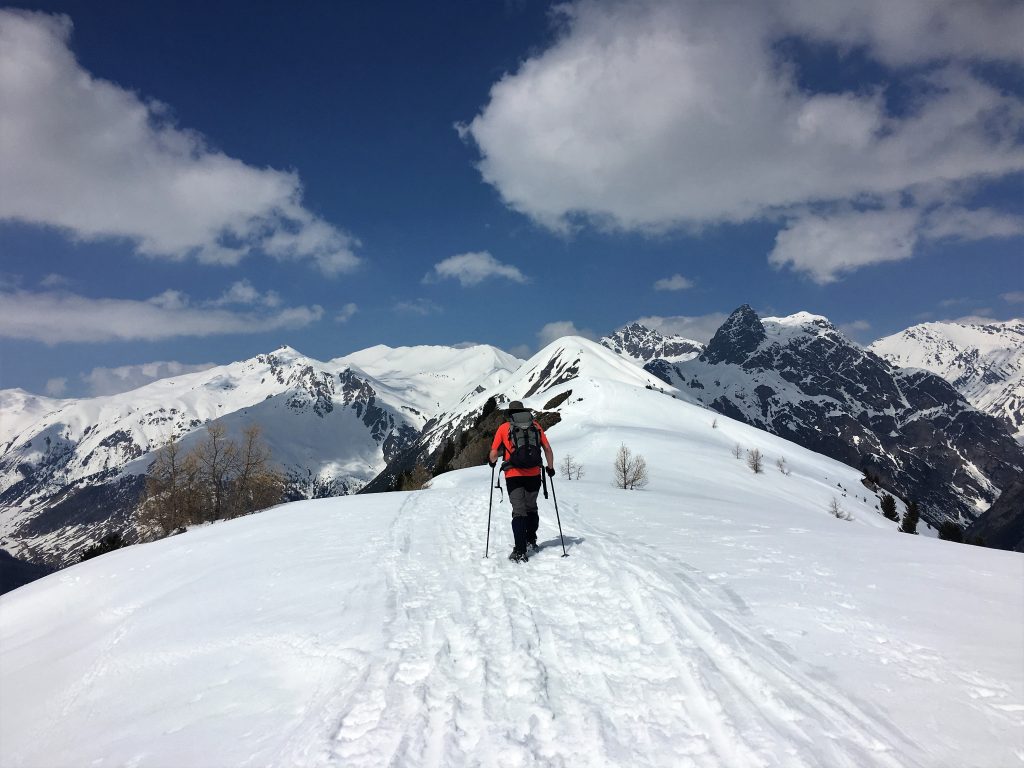 Snowshoe walking for a bit of peace and quiet

The Sosta at Trepalle is close to the road, at the back of a parking area used for the nearby Yepi lift and associated restaurants. There are a few shops and restaurants in the vicinity and it is within the duty free area.
If coming from the direction of Bormio you cross the highest point of the Foscagno pass and only just start the descent to Livigno when you get to Trepalle (the road is kept open all year and is a decent road, as with most mountain roads you just need to be aware of the weather conditions), the Sosta is on the Livigno side of the village in the hamlet of Eira.

At 2200m the sosta is pretty high and has the potential to be very cold. It has no electricity, just water and waste services, so you need to be self sufficient for power. Something that’s much easier on a sunny April day than in the depths of mid winter.

A payment of 12 euros is made for parking overnight (daytime parking is free). The machine takes card or cash (coins only) and has an English translation button. We didn’t see anyone checking tickets while we were there, but as we’re good citizens and don’t want these facilities taken away we paid up.

To get onto the blue run just go to the end of the sosta and climb up the snowy bank, ski along a level track and after about 30m this joins the blue run.

Going to the bottom of the Mottolino bubble will enable you to catch the new cross resort bus that goes to the Tagliede bubble (see below). One of the free bus services stops up by the sosta and will take you down into the centre of Livigno, great for a few hours in town, but if skiing it’s much easier to ski down and get the cross resort bus.

Livigno is split into two ski areas on either side of the valley. There is no lift or ski link between the two sides so you will need to use a bus. There are numerous free bus services that call in at the slopes, hotels and campsites in town, be careful to get the right bus in the right direction to avoid a long round trip. While you are skiing the best services are the new cross resort bus services; North (Carosello to Teola Pianoni Bassi) or South (Mottoline to Tagliede) don’t stop at any hotels so get you to the other side of the valley with no interruptions.

Livigno is mostly red runs and has invested a lot in ski/boarder cross and snowparks to make it’s slopes more diverting. There are also freeride areas on both sides of the valley. In good conditions there is plenty to keep you occupied.

The lift ticket prices in April are very good – 26 euros for a day is a bargain especially in such a snow-sure area.

Livigno is very popular due to it’s duty free status, arrive with an empty tank of fuel and fill up for less than a euro a litre – all the pump attendants will brim the tank to squeeze the last drop of fuel in. As you can imagine lots of people turn up with fuel containers too. LPG is available at Trepalle but is not as huge a discount as Petrol and Diesel. If you are staying in the sosta you don’t need to drive down into town for cheap fuel – there is an AGIP fuel station on the other side of Trepalle village (towards Bormio).
Down in the town there are plenty of shops selling the usual duty free stuff, perfumes, alcohol, cigarettes. Just don’t go over the allowances – you may get checked on the way out (we did, the customs officer seemed very surprised that we hadn’t bought anything while in Livigno). There are also lots of designer and brand named goods being sold at reasonable prices in town but don’t expect an absolute bargain, do your research in advance and know what you want, a bit like Andorra.

The Livigno valley has a lot of walking/cross country trails. Depending on snow and avalanche conditions there are plenty of walking trails that were being used for snowshoing and ski touring.

Above the valley we found the walk to the Crap de la Pare (I assume that Crap means viewpoint in Italian rather than the English meaning). This route ascends the track that heads north west above the sosta (used by skidoo tours so keep an ear listening for the roar of their engines). After a while you come to a red and white sign that indicates the Crap de la Pare. The path follows a series of crosses, so it is easy to find even if no one else has been there before you. At the viewpoint is a final large cross and amazing views into the Livigno valley. 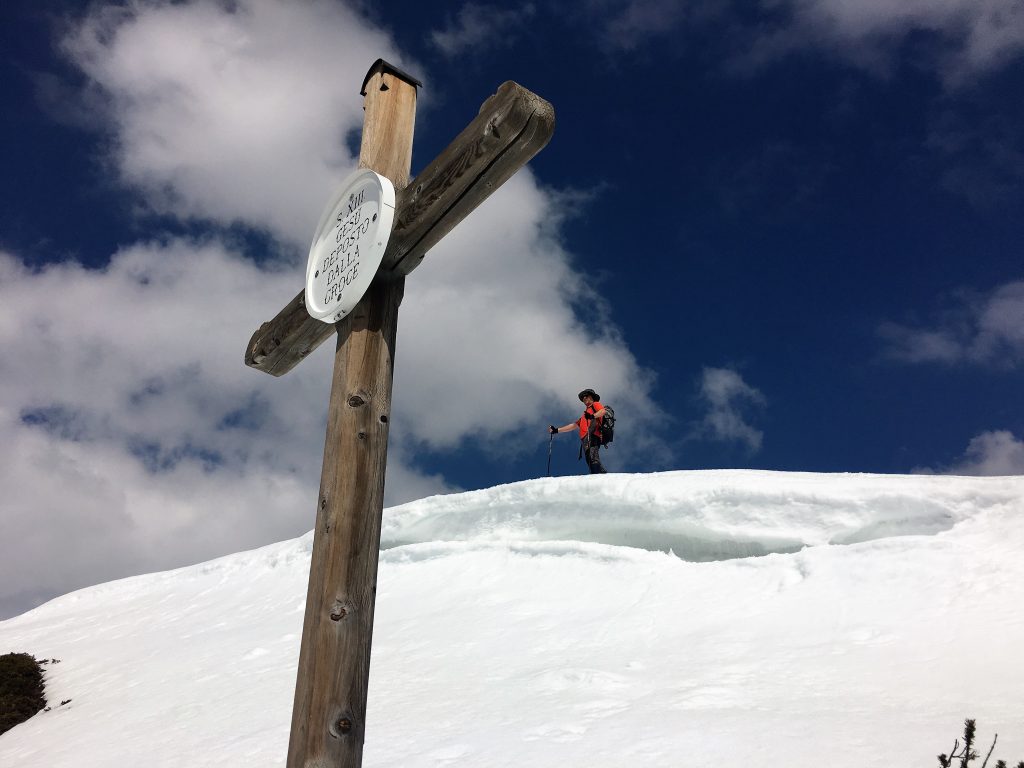 Following the crosses to the viewpoint 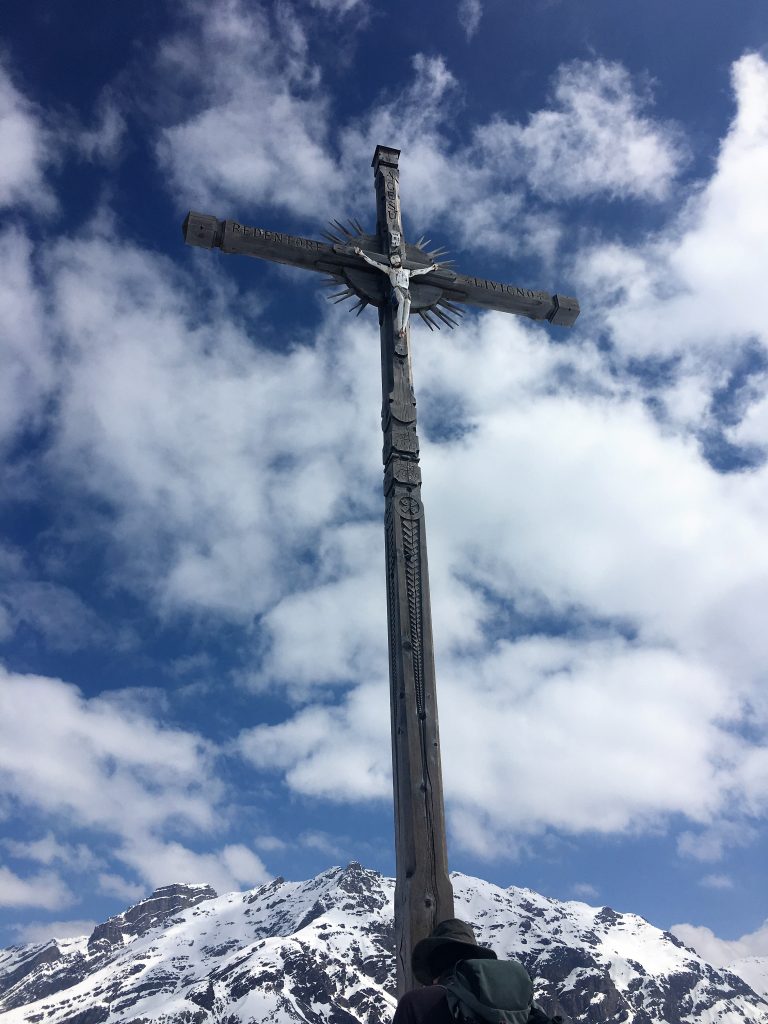 To mix things up a bit we followed the ridgeline back to Monte Crapone before dropping down and regaining the skidoo track back to the parking area. 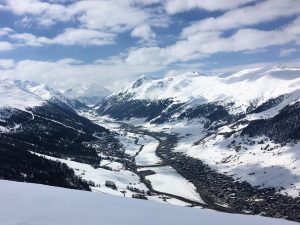 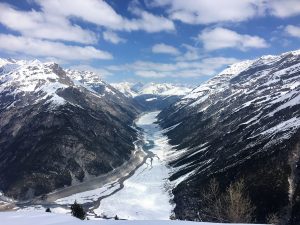