From Livigno we drove back down to Bormio, looking for somewhere that might have some Easter activity that wasn’t centred around skiing and late night loud and throbbing dance music. However the first thing we noticed as we drove into the parking area in Bormio was skiing. Having resigned ourselves to no more skiing we were childishly excited to see that the cable car from the village was running and people were wandering around in the warm spring sunshine in their ski gear. Maybe, just maybe, we might sneak in one final day of skiing.

Having settled into the motorhome parking area – a large space in which four motorhomes were widely spaced apart – we set off to investigate the gondola station and the tourist office. Skiing was on until Easter Monday (a last minute decision to extend the skiing because of the snow fall we had experienced while in Passo Tonale), and there was an Easter procession on Sunday. Not only that but the lovely lady in the tourist office had weighed us down with maps and guides for walks and bike rides, plus information about the valleys that had high avalanche risk. We were well prepared for a couple of weeks holiday in the area, let alone a long weekend.

So we did squeeze in our day of skiing; our really, truly, final day on the slopes. It was a fun day on steep slopes that stayed in pretty good condition due to their orientation. The area goes up to 3000m, far higher than I had expected. And ok, the lower slopes were closed and more green than white, but it was enough to keep us skiing for a few hours. As it was a Saturday and a holiday weekend there were loads of other people out, some skiing, some parapenting and most soaking up the sun outside the bars and restaurants. We were back down at Bertie by mid-afternoon and shocked by the number of motorhomes that had now turned up in the parking area. It was going to be a busy weekend. 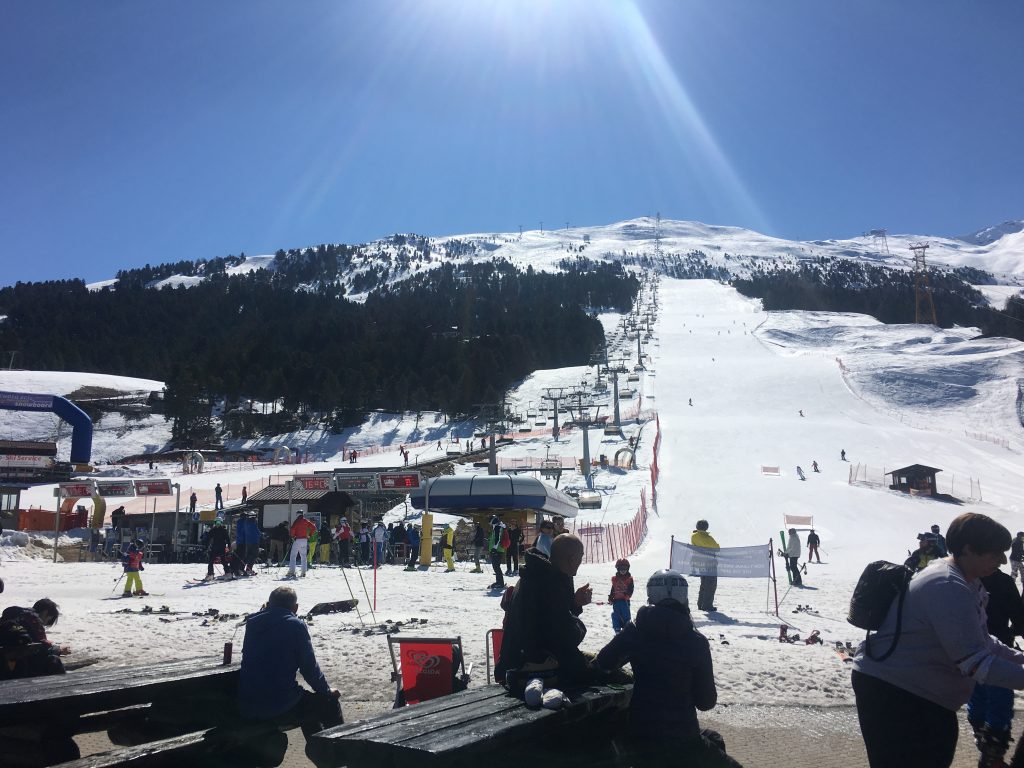 Sun on the slopes at Bormio

Later that afternoon I took our laundry to the ‘Corti’ centre, a small supermarket and shopping complex that had a launderette and welcome fast free wifi (plenty of downloading was achieved). It was a symbolic end to the skiing as we threw all of our sweaty old ski clothes into the laundry bag. When I returned with the clean and dry washing we packed all of the ski specific stuff into the storage boxes that live in our under floor space. It’s a strange feeling to have competed this stage of our travels and has left us feeling a little aimless; as though we should be returning home rather than continuing on our journey.

On the Sunday our attention was taken up with the Easter parade so we had little time to think about what next. The Easter parade in Bormio is a traditional affair with each province of Bormio fielding one or more groups. Each group follows a pattern as it parades the medieval town centre, first the babies and toddlers are wheeled through the streets on carts padded with sheepskin or in antique prams. 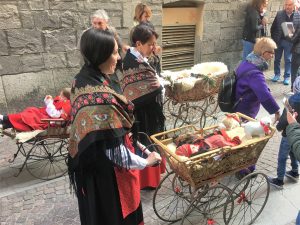 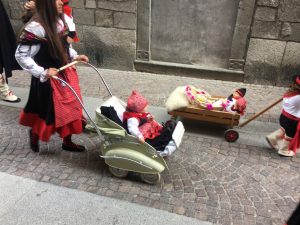 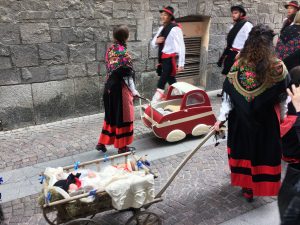 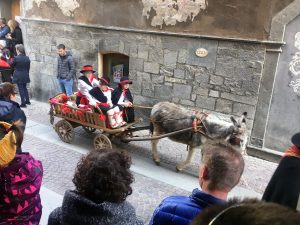 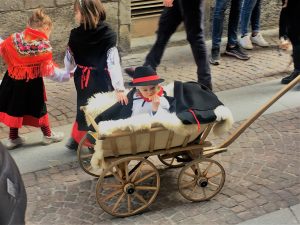 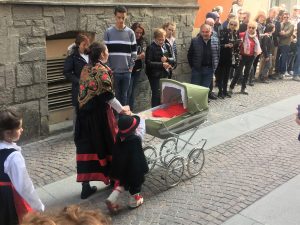 Then the women and girls carry baskets full of Easter favours, these might be sweets or biscuits, handcrafted flowers or other tokens. 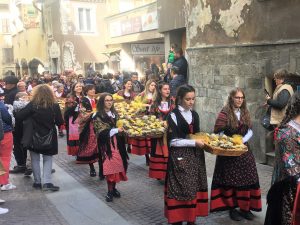 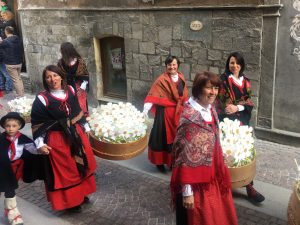 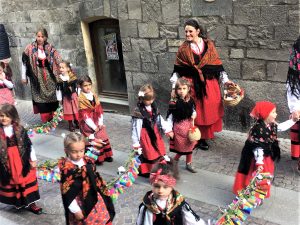 Then the float – the Pasquale – arrives, borne up by the men and boys of the group who carry the handcrafted wooden structures through the narrow streets on a litter made of tree trunks with the narrowest of margins to allow them to manoeuvre past the buildings, street signs and balconies. 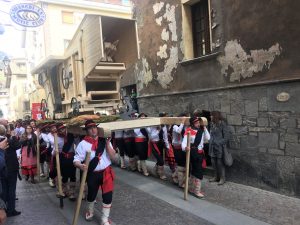 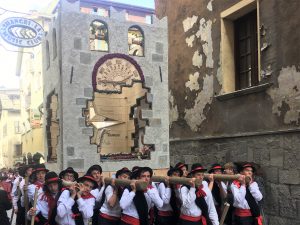 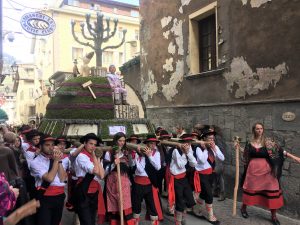 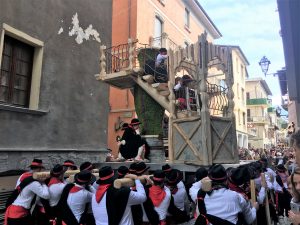 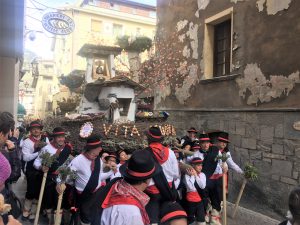 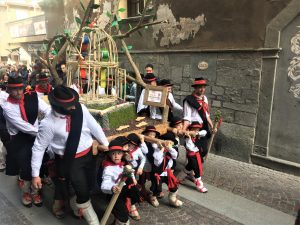 There were, I think, 13 pasquali in total, with an immense amount of time and craftsmanship involved in fashioning them. Some had a religious theme, but there were also those with agricultural (an enormous wooden replica of a threshing machine) or cultural themes, and some that were just beautiful. One of our favourites was a fully functional wooden play park carrying six children using a merry go round, swing, climbing frame and slide.

The theory is that the litters once were used to carry sacrificial lambs to welcome the arrival of spring. These days live lambs are blessed by the priest, although I imagine quite a few are also consumed in the restaurants of the town.

The procession ended in the town square where crowds gathered to hear the priest give his blessing and to then dash around to each float and collect as many of the Easter favours as they could. There was a strange moment when the priest concluded his blessing and the crowd crossed themselves in synchrony, apart from us of course. The strangers had been identified and it felt like all eyes were on us, although I’m sure that was just our paranoia, certainly we are still here to tell the tale. 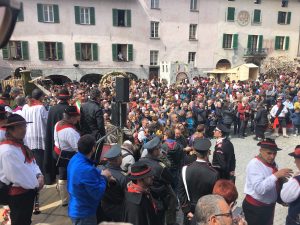 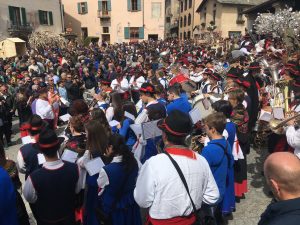 Later that day was prize giving, but it was difficult to work out what was happening, various prizes were being given but we didn’t work out who had won the first prize. It didn’t really matter, by this time plenty of wine, beer and Aperol based orange drinks had been consumed by the crowds and everyone was full of festive cheer. It had been a great day.

Monday was spent aimlessly wandering the town and the local foot and cycle paths. There is something very welcoming and attractive about Bormio. It’s a lively town that is obviously dependent in part on a tourist economy, but people live here – it’s not just a ski resort. Obviously there is money here and very little of the ‘rough around the edges’ feeling you get in a lot of Italian villages and towns. All the development is low rise; chalet style apartment blocks surround the attractive and well kept medieval centre. Building work is ongoing but discreet. House prices are substantial as you can imagine. We liked it enough to add it to our list of places we could live (but probably not afford). 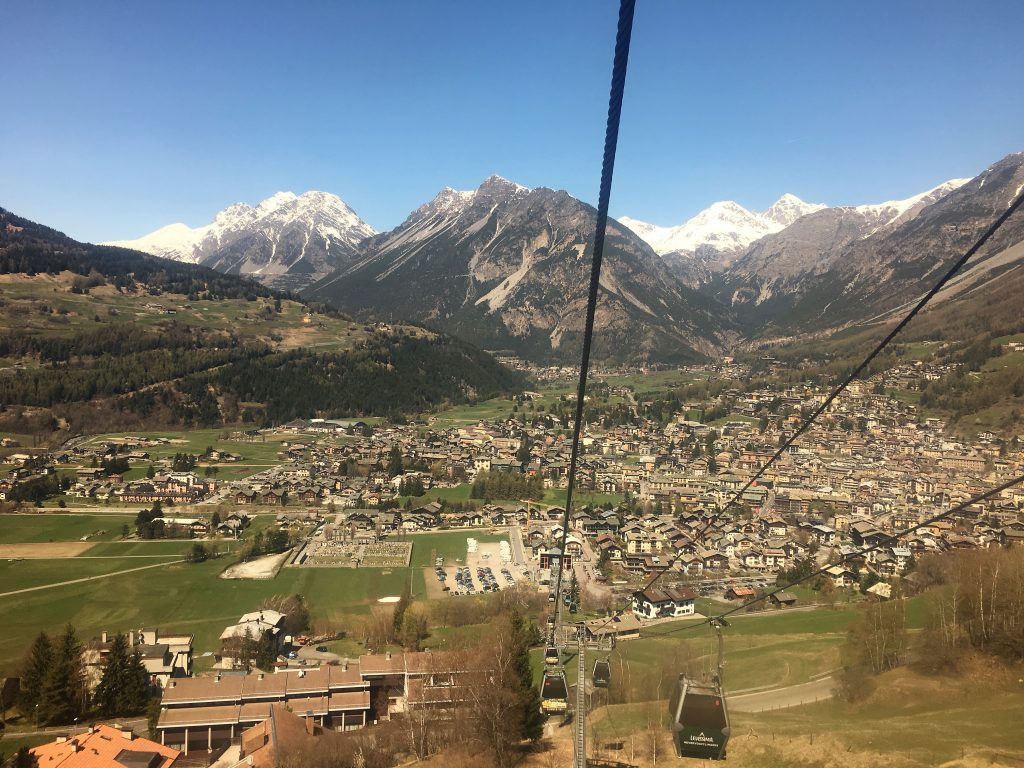 View over Bormio from the cable car, you might be able to make out the sosta above the car park.

The sosta in Bormio has about 40 spaces on a dusty (in hot weather) packed earth/gravel surface. It has services but no electricity. Toilets are available in the nearby cable car building while it is open.

The cost is €8 per night and is collected either in the evening or first thing in the morning.

The sosta is right next to the gondola station where you can get to Bormio 2000, and then a further gondola to the very top. In theory you could ski all the way back down, but it was difficult to tell with the lower slopes so bare.

Ski buses run around town and also to the other ski areas covered by the Alta Valtellina lift pass; Santa Caterina, Cima Piazzi-San Colombano and Livigno.

Bormio slopes are mostly reds and reasonably steep, covering a substantial vertical descent in a small area. The area is not large, with 15 lifts and about 50km of slopes, and it’s difficult to judge when skiing in spring conditions, but we enjoyed the slopes and were grateful that the majority were north facing and/or shaded by the trees, keeping them from getting too slushy. I wouldn’t recommend it for beginners or early intermediates.

Bormio has pretty much everything you need, a couple of reasonable supermarkets, laundrette, sports centre, lots of bars, cafes and restaurants and a thermal spa. The historic centre is interesting for a good old mooch around on a day off.

Despite being weighed down with maps when we left the tourist office we didn’t really explore more than the town. There is a cycle path along the river and some (snow free) cross country trails marked out in the valley.