Our journey to Passo Tonale started with the sort of afternoon I’d rather forget. Thinking to save ourselves a bit of driving we decided to leave Gressoney-Saint-Jean and drive down the valley to somewhere closer to the main route. I found a spot in Ivrea that looked convenient, easy to access and cheap, but I had forgotten to warn Paul that it was in a large town.

On the way the sat nav kept playing up because of an impending ‘environmental zone’. We never did find out where it thought this environmental zone was, but we only went past one sign that limited traffic of class 3 or below to certain times of day. Luckily we’re class 4 – so it wasn’t an issue for us. As we found in Bergamo last year (another stressful day) the signs are so detailed that it’s almost impossible to work out what the restrictions are while you’re driving.

So we were flustered, I was trying to navigate, the sat nav kept changing it’s mind and then the streets became cobbled just to add to the discomfort. We found the parking spot, at the end of a rammed car park with a barrier in front of the motorhome area. Paul flatly refused to drive into the car park and check out the barrier in case he didn’t make it back out again. I suggested parking up so I could walk back and look but Paul wanted out of the town and back into the countryside. With Paul pestering for directions and the sat nav asking us to make U turns we finally found a layby on the outskirts of town where I had a moment of peace to tear my hair out and then find a new parking spot. Then we realised that the drive would mean going back through the town we had just left, so I had to find us an alternative route.

When we finally arrived at the Viverone lakeside sosta we were both frazzled and hardly talking to each other. It took a massive and spectacular thunderstorm to break us out of our sulks and friendly again. This motorhome life is not always fun, but it’s difficult to stay grumpy when you have to live in a 14m² tin can.

We investigated a bike route around the lake for the following morning, but overnight the forecast changed from sun to drizzle and so we moved on. One day we’ll get to enjoy the Italian lakes rather than driving through them, but not today.

We decided to drive all the way to Passo Tonale. This was a long old route via Strada Statale (SS) roads and a welcome bit of free motorway around Milan. We stopped for supermarket essentials and some fuel; Italy is no more expensive than France these days and we found a nice cheap supermarket fuel station at Trecate to top Bertie up. 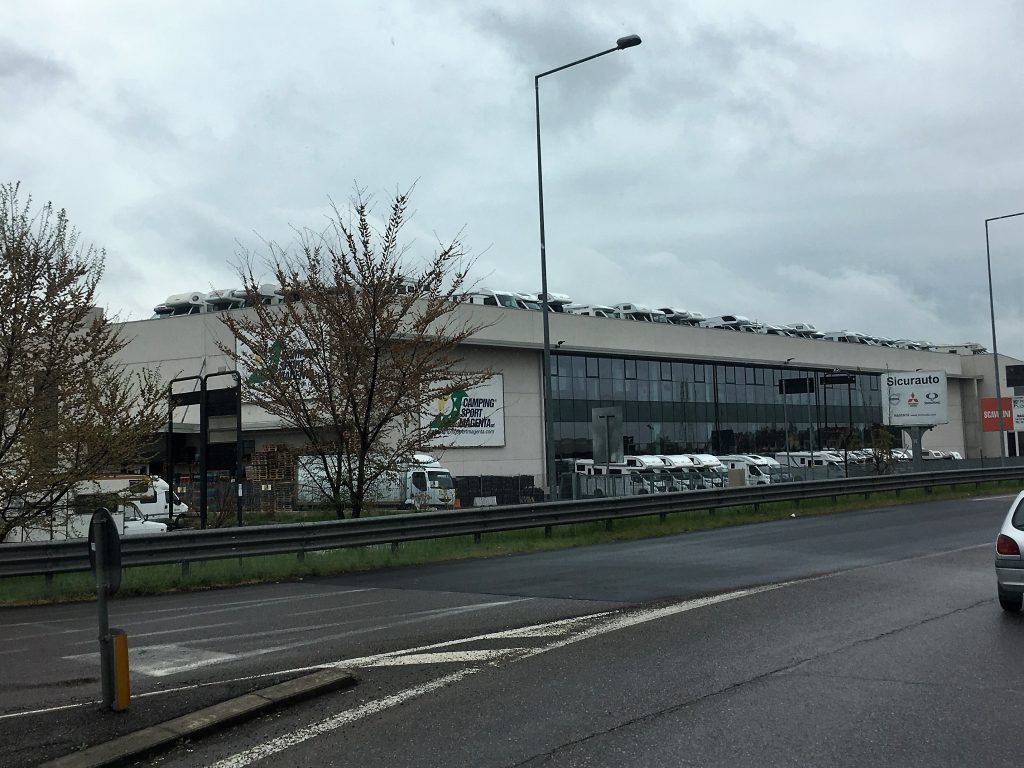 This huge motorhome showroom and accessories store was very tempting, but we managed to drive past (you can stay here overnight too).

Because we were avoiding toll roads we drove to Passo Tonale via Lake Como, Sondrio and the closed ski resort of Aprica with it’s bare ski slopes and forlornly stationary ski lifts. It was a sad sight and a reminder that we are approaching the end of the season. The roads weren’t great once we got past Sondrio, but the tantrums of the previous day had been forgiven and we were in good spirits, enjoying the scenery.

We ended up in the ski resort of Passo Tonale in late afternoon. It’s not a complicated place, mostly hotels strung out along the main road, so it wasn’t difficult to find our parking spot at Area Camper Paradiso. We drove into the paid area, collected our card from the entry barrier and then tried to access the services and bathrooms for a look around. No joy. With no one around to ask, and confusing (well not really, but my brain wasn’t playing ball) instructions we wondered what to do. Thinking that maybe we had to somehow activate the card I played with the payment terminal in the services area which was NOT a good idea. The card was swallowed up by the machine which spat out a barcoded receipt to let us out of the area. 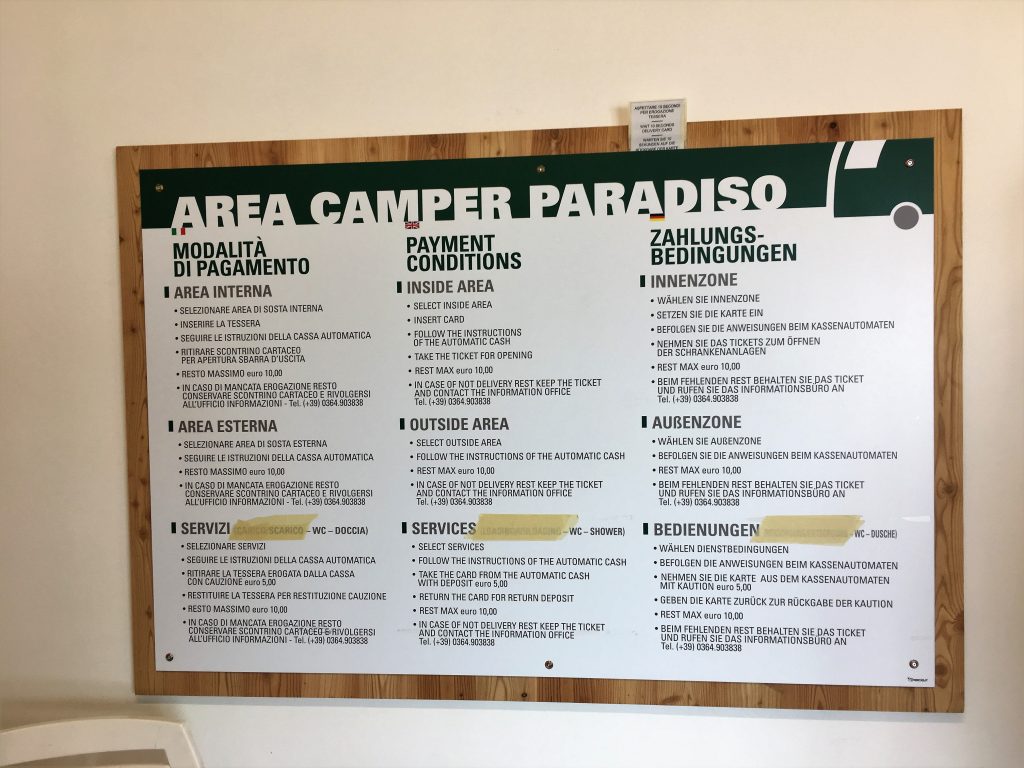 Probably not as complicated as I thought

Paul had levelled us up on the chocks and connected to the electricity by this point and was not at all amenable to driving out and back in again, so I had to phone the caretaker. He arrived within a few minutes, all smiles (probably laughing at our ineptitude – I would be) and English about as good as my Italian. He proceeded to show us how everything worked. It turned out that I had been too impatient with the card sensors – you needed to hold the card against them for about 5 seconds for anything to open up. Honestly it’s an easy mistake to make. 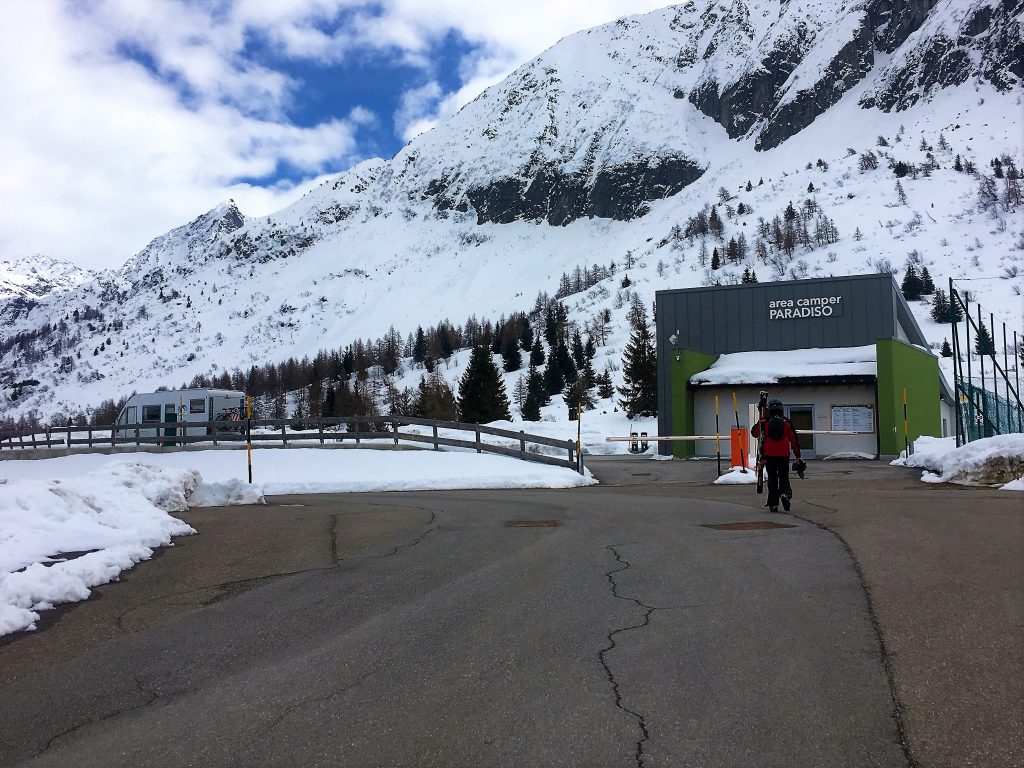 Then, to top things off, we found out that we had received not one, but two, speeding fines from our Autumn travels. It’s been a subject of much discussion recently on various forums – the systems of the French and Spanish traffic authorities must have been updated to take in the DVLA data that is now being shared with EU countries. Lots of people have been receiving fines in the post. Luckily it was an easy enough job to check them online (yes it was definitely us) and pay them. Only the Spanish payment system gave us a bit of bother; in the end the only card that worked was our Santander card (which makes sense). I will be keeping a closer eye on Paul’s speed from now on – he’ll really enjoy that!

A couple of days best put behind us I think.