Montchavin and Les Coches are two villages sitting almost on top of each other at the eastern extremities of La Plagne resort and very close to the Vanoise Express that connects you to Les Arcs. Although we’d ended up here as second choice we soon felt happy that we’d ended up here with it’s amazing views and friendly compact villages.

We initially thought we’d just spend a couple of days here, but after looking at the weather forecast we decided to stay for the whole week. The weather was going to be alternately wet (hopefully snowy at higher altitudes) and sunny (the campsite notice board had a very poetic English translation of the forecast with bored skies and fugitive clearings). We wanted to get at least a couple of days skiing in between the wet weather and in the end we only managed two days in the whole week, we could have skied more, but we only really like to spend our money on good skiing days. 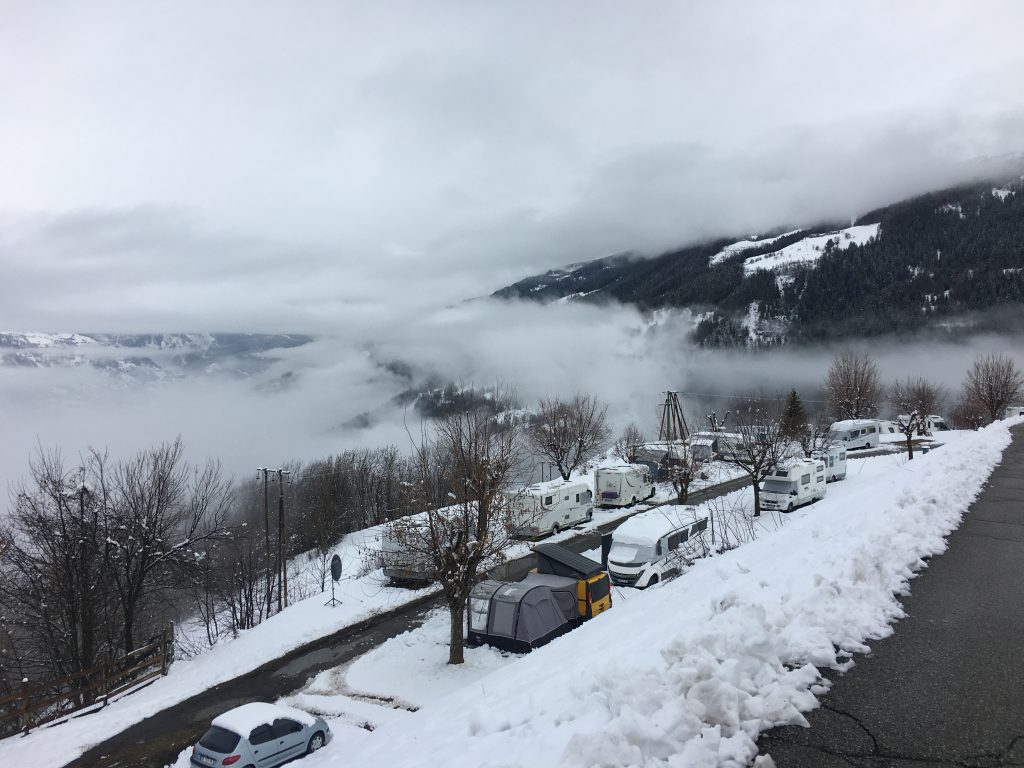 We watched clouds gather and disperse all week, with the valley changing from white to green on an almost daily basis.

One such good day was the day after we arrived; with fresh snow on the slopes we ventured out for a long day’s skiing. After paying the ridiculously expensive lift ticket price we wanted to eek as much out of the day as possible and managed to venture all the way across the resort and back again. We didn’t ski again until the Saturday when we had another great day’s skiing in fresh powder. The good skiing lasted until we descended towards the village and we decided to ski all the way down. The warm sugary slush (mostly brown with churned up dirt) on the Montchavin runs was quite depressing, almost as depressing as England’s performance in the Six Nations later that afternoon. Luckily we had company to watch the match, a small group of Brits from the campsite descended on the common room (including one very brave/mad chap who was staying in a tent – yes a tent!), and conversation increased as England’s performance declined. Well done to Wales though, it was a well deserved Grand Slam (said through gritted teeth).

In between skiing days we ventured out onto the local footpaths, snow shoes were not necessary although poles were useful for venturing over the infrequent patches of ice. While it rained I baked biscuits and quiches for our lunches and we fixed several bits and pieces; Paul’s belt that had come unglued, our shower screen retainer which had snapped, my boot bag strap which had frayed to within a few millimeters of breaking. Paul sorted out some new hooks for our towels – the current hooks sit above the toilet and it’s a bit impractical especially when we forget to put the seat down and they end up in the toilet bowl. We enjoyed the sense of achievement as we managed to tick jobs off our to-do list. 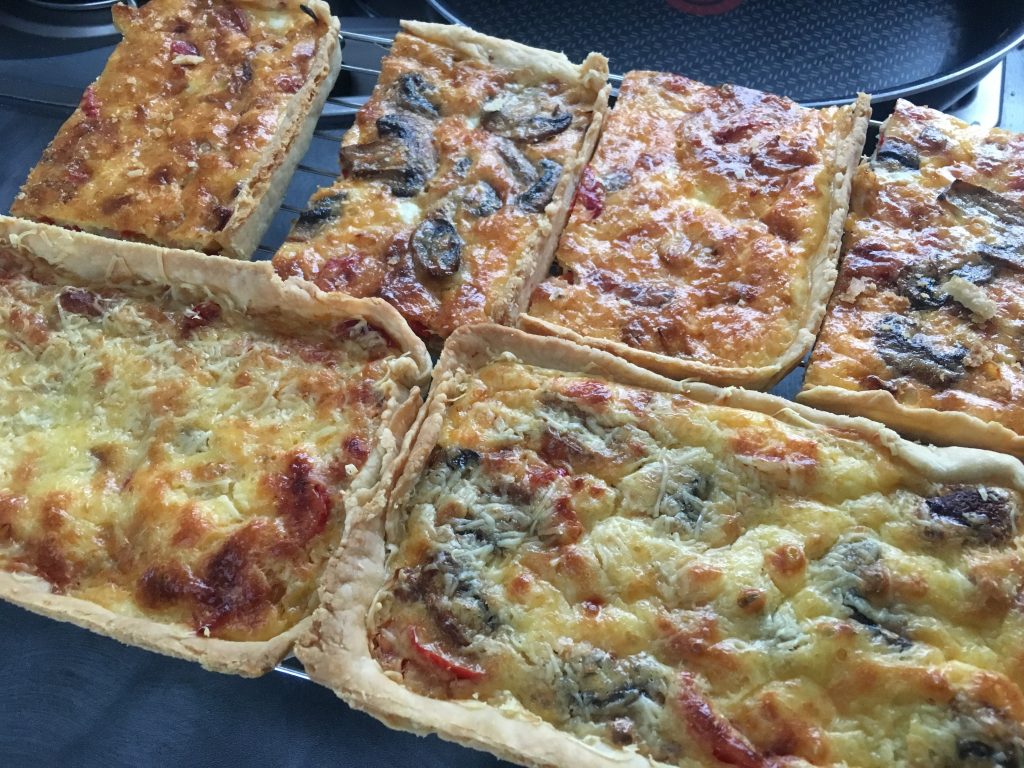 This campsite has grass pitches in a couple of terraces, all giving views up the valley towards Bourg Saint Maurice with Mont Blanc in the distance. The grass pitches were a little soggy in places, but a little investigation revealed the firmer areas which seemed to have slate chippings under the grass.

The reception is above the amenities block and is only open in the morning and late afternoon. Between 10:30 and 4 it is shut, however if you look on the reception door it has a list of pitches available. If you have booked it will tell you which pitch you are on. So you can get comfortable even while the reception is closed.

Electricity is supplied in 4,6 or 10 Amp form, but this isn’t clear on the hook-ups as they are mostly labelled with people’s names where they have booked in advance. Once reception is open you can get sorted out though. The lady who runs the site is very friendly and has excellent English.

The facilities are pretty good – toilets, showers (no temperature control and always a degree or two cooler than we would have liked), hairdryers and an indoor washing up area. Coin perated laundry facilities are available as well as sinks for handwashing.

There is a common room area with a TV, books and games next to reception. There is also a microwave, freezer (for cool blocks) and sink in here. Wifi was pricey so we didn’t use it. Bread and croissants can be ordered for the next day and on a Tuesday evening the local pizza place will deliver to the campsite.

Campsite prices can be found online, we felt they were very reasonable especially as you can choose how much you want to spend on electricity. Pitches can be booked online.

There is a Sherpa supermarket in Montchavin, with the usual inflated prices but decent range of goods. The village is pretty compact and has a couple of nice cafes (we had a few baked treats), a few restaurants, a ski school, tourist information and lift pass office.

There is a spa complex which was too expensive for us at €20 per person. It does a special price on Saturday and Sunday mornings if you want to save a couple of euros. The pool area is not really for swimming which put us off.

Les Coches has a very similar set of facilities. You can get a free bus to/from Les Coches, there is a stop right outside the campsite and timetables are available from campsite reception.

We didn’t use the facilities (apart from public toilets) in any of the La Plagne villages.

It’s a short but uphill walk to the Montchavin chairlift (this is by the really cute beginners/infants slope in the centre of the village). If you don’t want to do this with boots on and carrying skis (the uphill path was clear while we were there but I imagine it could be unpleasant if it was icy) then we were told that the Evolution 2 shop will hold your equipment for you.

You can ski all the way down to the bottom of this lift, but in the warm conditions we were experiencing it would be easier to get the cable car down from Les Coches.

You could also use the free bus to get to and from the slopes at Les Coches, however there is still a short uphill walk from the last stop to the slopes so you’re probably not saving much.

Bus service timetables, piste maps and other useful stuff can be found on the Yuge app.

We called it La Queue – even though the school holidays were over there were significant queues, particularly in the Plagne Bellecote area which acts as a funnel for traffic going from one side of the resort to the other. You have to get the Arpette lift to get back to Montchavin and so it can be really busy towards the end of the day and just before lunch.

Montchavin Les Coches has it’s own local area pass which would be reasonable value if the snow conditions were good (the runs are longer than they look on the piste map). Otherwise you can get a La Plagne lift pass or a whole Paradiski pass if you want to go to Les Arcs.

Most of the runs are long easy blues and are suited to beginners and early intermediates and people who like to put lots of kilometres in. There are a number of reds and blacks but a lot of them were closed while we were there, so we found it a little dull for skiing, although very attractive. La Plagne, as the name suggests, is pretty flat; a wide flat bowl with steep sides. As a result it gets pretty windswept which can cause lifts to be shut and runs to be swept clean of snow as quickly as it falls. The glacier area was never open for the whole week we were there and the lower runs were shut because of the warm weather. It is definitely worth getting the lifts to the ridge and going over the top into Champagny, but again there were lots of closures while we were there – just bad luck. 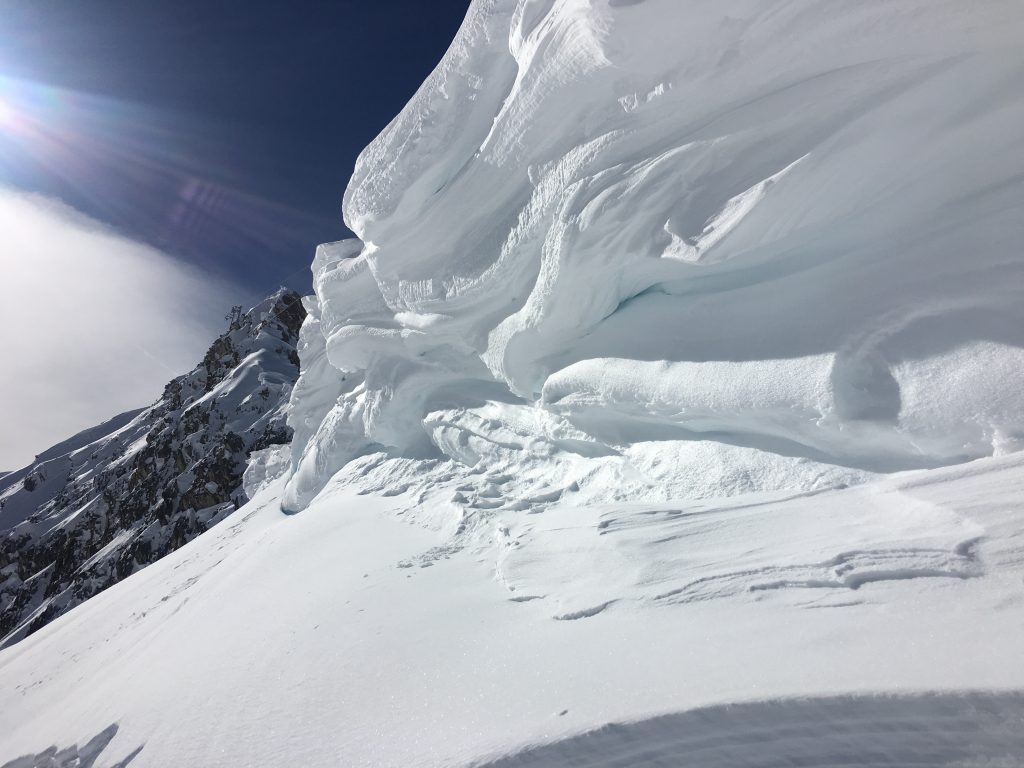 Wind sculpted cornice at the top of Dos Rond

There is a fun slope (from the top of Arpette), a snow park, halfpipe and border cross if you want to do something a bit different, which you probably will.

You can get credit card style contactless passes (we just re-used the ones that we had from Les Arcs) and pay an additional €2.80/person per day for insurance to cover you for rescue from the slopes in case of an accident (not any other medical costs though so you still need proper insurance). A day pass for La Plagne is a whopping €52. Passes can be topped up online.

There are lots of walking trails in the area and as the snow line was pretty high they were very accessible. We took snowshoes with us but didn’t need them. Information is available from the tourist office.

This route took us up through the eastern side of the village before we dropped down switchbacks through the forest and between mossy rocks to the river valley. On the way we passed old mine buildings and a few information boards about the mining of Anthracite (hard coal) in the area. Squirrels were very active in the trees above us, flashing their white bibs as they leapt from branch to branch. 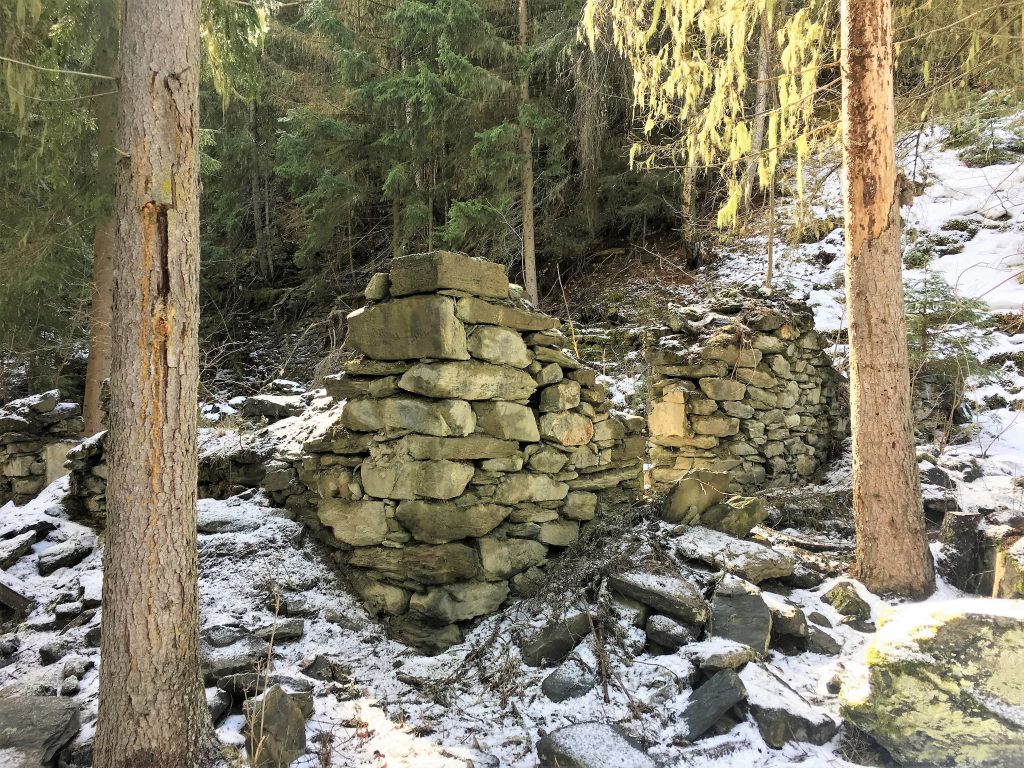 Mine buildings in the forest

As you reach the river you can see through the trees to the Vanoise express which takes skiers across this valley as is known as the ‘flying handbag’ for pretty obvious reasons once you’ve seen it.

From the river you retrace your steps uphill for a few meters and turn right on the track that slowly ascends towards Montorlin village. The local geese were out in force as we walked through – gabbling noisily as we invaded their territory. From Montorlin a path climbs up to Montchavin and deposits you just down the road from the campsite.

We had originally intended to do the full version of this route, but left it a bit late so decided to take a short cut.

From Montchavin centre you follow the footpath to ‘La Pierra’, an abandoned and ruined house and barn. If you’re following the full route you go on from here, but we saw the sign saying it would be another three hours to Les Coches so we turned back and a few hundred meters later we headed right (uphill) on an alternative route to Les Coches. This short cut through the trees took us to a track which we followed to Les Coches. There was a lot more snow on this route and snowshoes would have been possible, but not necessary. 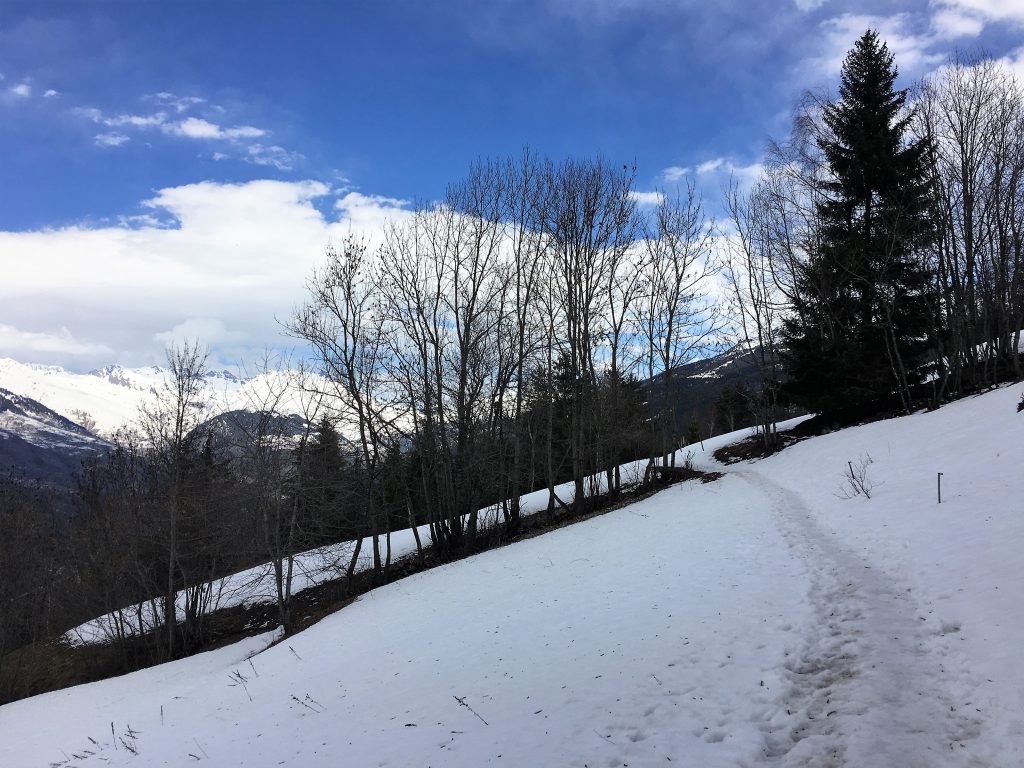 Snowy footpath, but hard packed and no snowshoes necessary

On reaching Les Coches we walked through the village to the cable car back down to Montchavin (we could have put our snowshoes on and just walked across the slopes, but it didn’t seem worth it by that point). You could do this walk either way round, but the cable car is free in this direction(it’s €3 per person to go up) and actually I prefer to walk uphill, especially when it’s snowy underfoot. 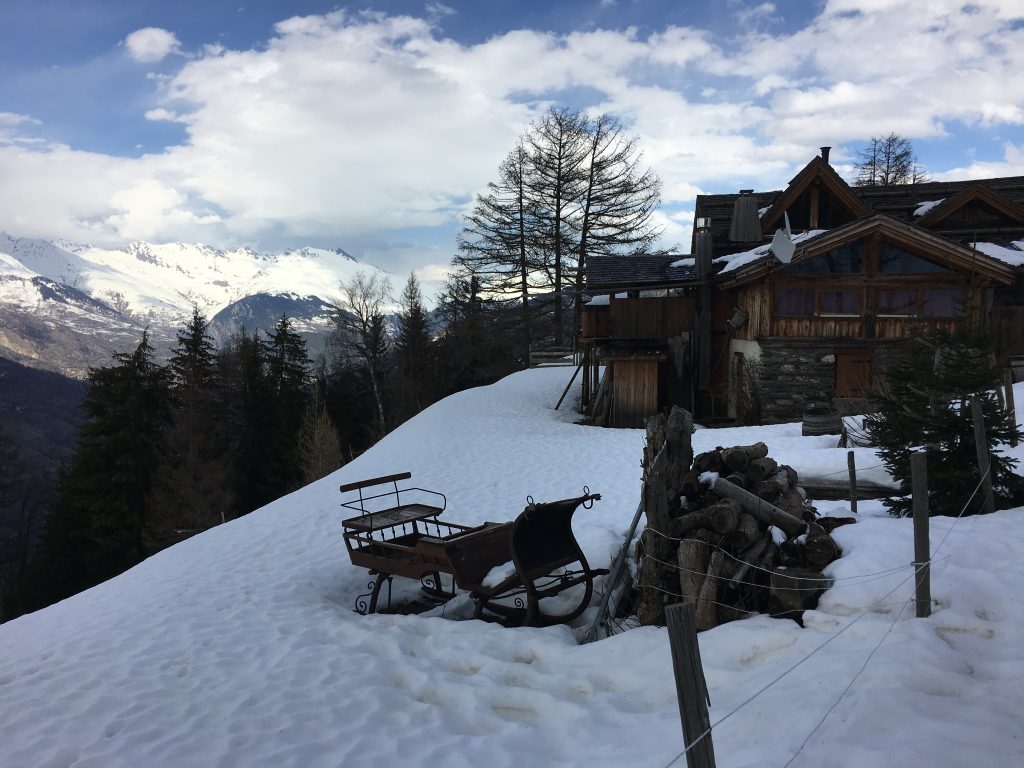