We were more than ready to move on from Camping Huttopia; not that we hadn’t enjoyed our stay, but 11 nights in one place is rather a long time for us and we had an urge to see somewhere else.

We weren’t planning to go far though. Les Arcs ski area is part of the wider Paradiski domain, and we hadn’t yet ventured over the dividing line to La Plagne a) because it involved going through the bottleneck of the Vanoise Express cable car, b) because it was a more expensive ski pass and c) because it is notoriously busy and even busier due to French school holidays.

Now that school holidays were over we thought we would move on to a parking spot in La Plagne and ski that side of the domain. It should be quieter now and it would be cheaper to buy passes just for the La Plagne area.

First a trip to the supermarket to stock up where we got a bit carried away over it’s large selection of international products. I stocked up on tea bags, nearly making the expensive mistake of buying Tetley tea bags before realising that actually Super U do their own brand of English Breakfast Tea for a quarter of the price. We bought bottles of Robinson’s squash for the vastly inflated price of €4.65 each – something that seems so expensive compared to the UK but is far cheaper than buying soft drinks and we like to have some flavour in our Camelbak drinking reservoirs to take away the plasticky taint. And we stocked up on various Indian and Chinese ingredients, knowing from experience that they can be difficult to find in Italy (where we should be by the end of the month). In all we spent double our usual weekly amount but hopefully it will be worth it. With fridges, cupboards and other bits of random storage full to bursting we moved on the short distance, but considerable height, to La Plagne.

High up at Plagne Villages is a motorhome aire that can hold about 40 vans. It’s at 2200m above sea level, significantly higher than our campsite in Bourg Saint Maurice, and some of the spaces can be pre-booked. We had tried to get a booked space but the website said there were none available, however I wasn’t too worried as there are also spaces available for people who just turn up. We hauled Bertie up the switchbacks in increasingly snowy weather, getting to a point about 200m from the aire and realising that snow chains were going to have to go on.

We pulled over to put the chains on, giving the beeping and impatient local ski bus just enough room to get past us. This is only the third time we’ve had to use them and the first time we have been ‘in public’ while getting them sorted. Paul insisted on helping even though he had no idea how to put them on and refused to read the instructions. It frayed our nerves as people wandered past offering helpful hints, one French couple even offering to push us the last few meters rather than have to worry about chains. At that point I took over the process and sent Paul inside the van. To Paul’s amusement and my frustration I hit my head on Bertie’s wing mirrors each time I stood up, but at least the snow chains were finally on. A British motorhome drove downhill past us and the occupants helpfully told us there were no spaces left in the aire. Arrgh! We still needed the chains though in order to go up to the aire and turn around so my sore head and wet knees were not in vain.

Sure enough we got to the entrance to the aire to find the sign saying ‘Complet’. We think this is the first time we’ve ever turned up to a parking spot and found it full. Outside the aire is a holding area where several vans were parked up, waiting for a space to be vacated. From the occupant of one van we found they had been there for a few days. We considered staying here, after all we are self sufficient (if the solar panels are clear), but the snow was falling faster and our panels were already covered. In better weather this would be a definite possibility, we could sneak in and use the services (apart from the electricity) and avoid paying the €22 a night charge, but it was cold and we were both pretty miffed (and I had a headache). Even though we’d known this was a possibility the snow had made the morning a distinct pain in the rear end.

We did have a back-up plan, so we were off to a campsite, still with access to La Plagne, but further down the mountain at Montchavin. Off we trundled, the snow chains being useful for the first couple of hundred meters and then being a rumbling distraction until we found another spot to take them off, this time not blocking any traffic or being quite so conspicuous. Then it was back down some switchbacks and up some others, to the campsite.

It was now lunchtime, so reception was not open, but luckily there was a map pinned on the door explaining the pitches that were free for people who hadn’t booked. A small thing but so useful to be able to get comfortable on a pitch as soon as we arrived. The campsite has a base price of €17 for two people for one night, but then an additional charge depending on the electrical supply you want to use (4,6 or 10 amps). So actually you can camp here for the same price as the aire, plus you get access to showers and other campsite services (but you don’t get the aire’s generous 16amp electricity supply). The best part of being in the campsite didn’t become clear until the following day when the sun came out and revealed the fantastic views. 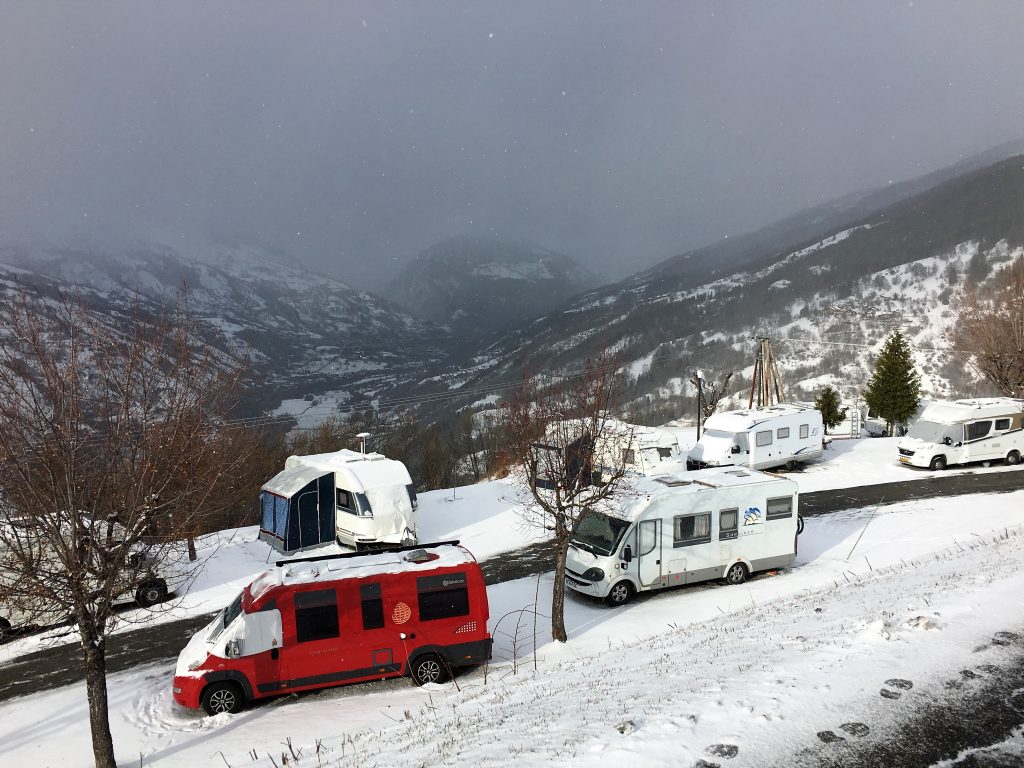 Not much to see here?

The day may not have gone to plan but we were happy we’d ended up here. 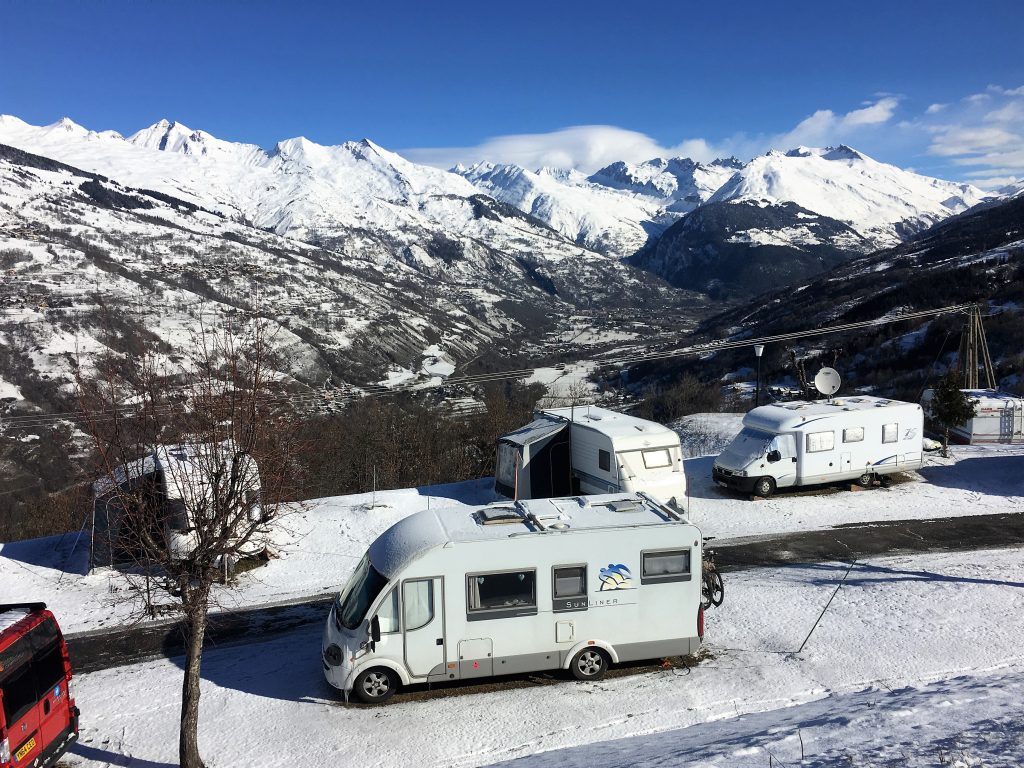