We were in St-Gervais-les-Bains, not because we had any particular plans, but because I was feeling under the weather and we wanted somewhere free and warm (ie not too high).

We spent a couple of days chilling in the van with occasional forays into town when the Bertie’s interior seemed to be closing in on us. The boulangerie at the entrance of the car park made a few euros from us. We enjoyed their pain au raisin (with icing, yum) and their St Genix pastry with it’s fuschia pink caramelised nut topping, but even more we enjoyed playing with their self service cash register. I presume it’s set up so the staff don’t have to touch dirty old money but it’s quite a gimmick and enabled us to use notes and make a bit of change without getting rolled eyes from a cashier. 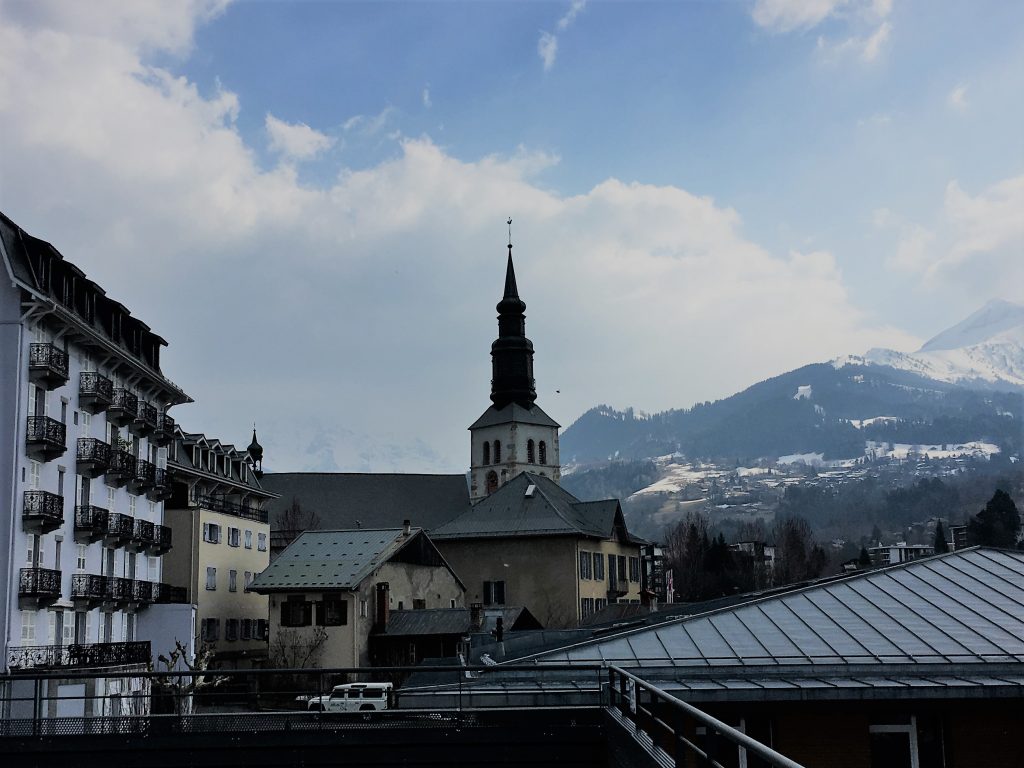 Once I was feeling healthy again we went for a walk up the Val Montjoie and the next day we debated whether we should ski. The ski area here isn’t particularly high and we could see that the lower slopes were bare. The weather was still very spring like with warm days and nights that were only just dropping below zero. There were plenty of reasons not to bother, but still – against our better judgement – we felt the pull of the mountains and decided we might as well.

We donned our skiing gear feeling rather ridiculously overdressed. There was no way we could manage to put our helmets on for the walk to the bus, so we had the faff of having to carry them along with our skis (we’re firm believers in wearing helmets at all times while skiing). It was so warm we half expected the gondola station to be closed, but a trickle of skiers were making their way up to the top of the slopes.

The day was spent hunting down decent snow, following the points of the compass by trial and error (piste maps are really bad at indicating the orientation of the slopes). When we found a decent slope we skied it several times rather than moving on too quickly. We looked on in disbelief at the people who were skiing as far down the slopes as they could and we looked on in awe at the people who made it look easy. We haven’t mastered the technique of skiing in spring snow and still find ourselves instinctively trying to turn with our skis wider apart as if we’re on powder, rather than closer together as they should be in the slush.

To add to my frustration we had to have an emergency toilet stop at a bar where we paid the extortionate French prices for a couple of drinks and then found I needed to pay an extra 50 cents to use the toilet. Of course Paul didn’t have to pay anything because the urinals were free. I’m thinking of reporting them to the equal rights commission.

It was one of those days where we only just enjoyed the skiing. Hopefully there will be more snow before the end of the season because I don’t think we’ll be doing any more skiing In those conditions. 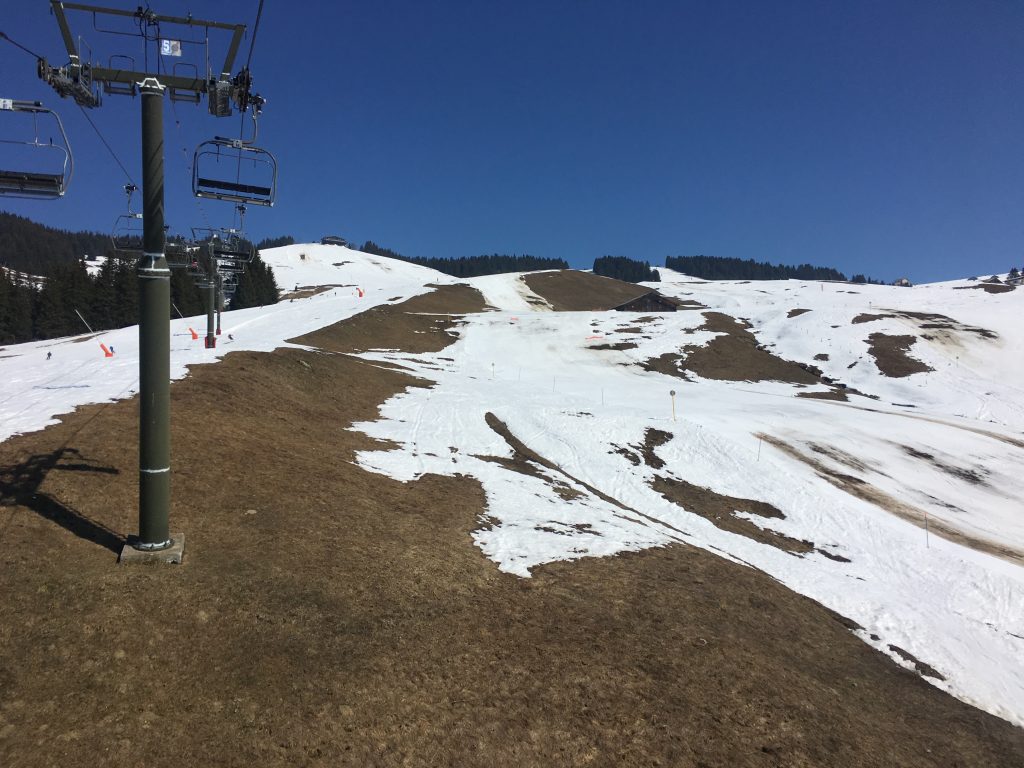 Bare slopes under the ski lift

There is a municipal aire in St Gervais, it’s spaces are narrow and short, marked out for cars rather than motorhomes, so we had to straddle a space – something that makes me feel a little uncomfortable. There is enough grass behind the parking spots to overhang at the back so even the bigger motorhomes don’t intrude too far into the thoroughfare. In winter snow is dumped at the back of the car park, the small pile of rapidly melting snow didn’t really have any impact on us, but in colder winters it might restrict access to some of the spaces.

The aire is free, the only cost is for fresh water at the Euro Relais service point, a jeton is needed from the tourist office which is just a short walk away. There is a second tier of parking above the main area where a couple of vans took themselves. It was a little quieter up there away from the constant sound of the river, but I’m a fan of white noise so we stayed down on the lower level.

The parking is below the Patinoire – the ice rink where ice hockey matches are held. The parking gets busy on training nights (and I assume even more busy on match nights) when cars squeeze into the available spaces between vans. The local market on a Thursday morning also increases the number of cars looking for a parking space. 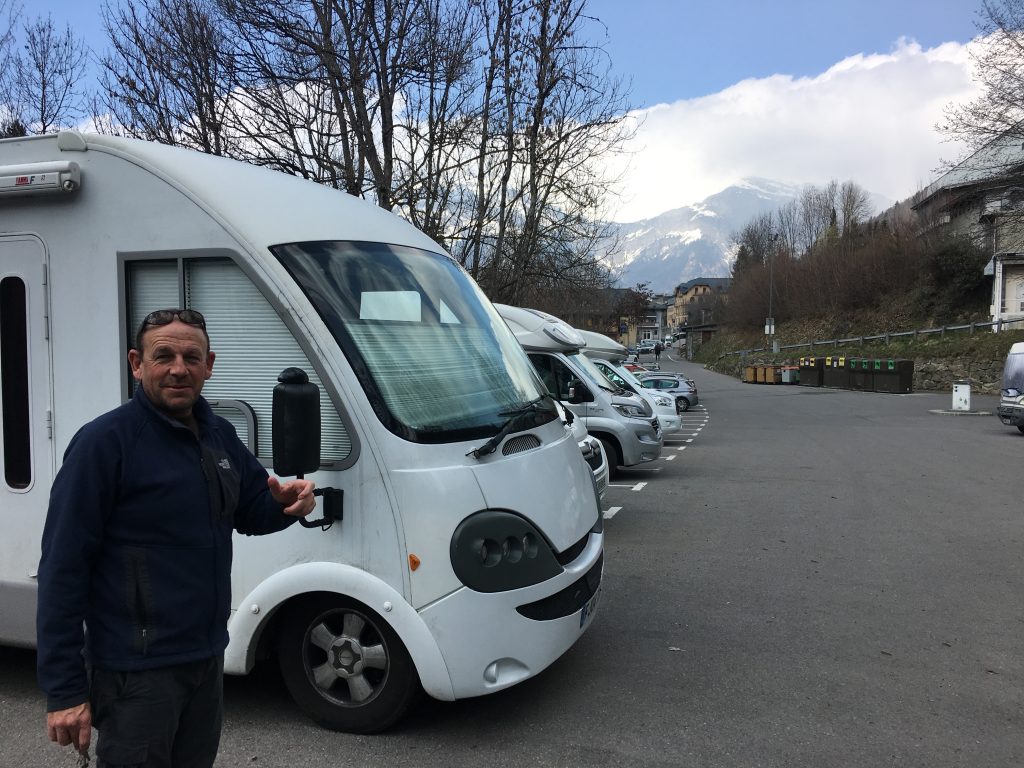 Resting up in the motorhome aire at St Gervais les Bains

There are a couple of small supermarkets in town as well as numerous other retail outles. It’s a proper town rather than just a resort so it feels lively with ‘normal’ day to day living.

There is a swimming pool on the way out of town, the quickest way to get to it is to follow the footpath that leaves the top level car park and goes up to the road above the Patinoire. It’s about a 5-10 minute walk. Swimming costs a very reasonable €5.

We didn’t use any laundry services (we stopped in Passey on the way and used the self-service laundry at the Super U).

One of the main tourist attractions here is the Mont Blanc Tramway, a cog railway up the flank of Mont Blanc to the Bionnassay glacier. Or you can go to the thermal spa that gives the town it’s ‘les-bains’ appendage. A combined lift ticket and spa entry package is available.

There is a free bus (line A) that goes around town on a 15 minute loop, the nearest stop is outside the Bibliotheque. it’s about 250m to walk to the bus stop and it drops you right outside the lift pass office at the gondola station. Line B also goes past this stop. The full timetable and route plan can be found here.

There is a two gondola ride up to the slopes, in theory you can ski all the way back down, but by all accounts it’s not a run that’s open very often and isn’t very pleasant anyway.

The ski area is linked to Megeve, and you can get another long gondola ride up to the top of the Megeve slopes. I’m sure when the snow is better it’s not too tiresome, but in poor conditions it was a bit of a slow process. It’s very easy to get from gondola to gondola though, so no nasty trekking through the town.

The day pass for the Evasion Ski area is €47.50, the four hour pass is a few euros cheaper but you do need it to still be valid when you descend the gondola, so in poor snow conditions it would really limit your skiing time. We just missed the spring skiing discount which starts officially this weekend and reduces the prices by 20%.

In hindsight we should have driven up to the Les Contamines ski area which is part of Evasion Ski but is not linked by any lifts. There is more terrain above 2000m here and it was probably in better condition.

It would be unfair to comment on the quality of skiing given the snow conditions, there were some runs we enjoyed around the Mont Joly and Epaule lifts, plus some other spots on the Megeve side that hadn’t deteriorated too badly. The area is predominantly made up of red runs which would normally suit us, and there was a lot of tracked off piste which I imagine would be fun in the right conditions. There are amazing views of the Mont Blanc peaks from the ski area.

There are plenty of walking trails from St Gervais although a few of them were still closed waiting for their post winter maintenance. Higher up on the pistes are some snowshoe trails.

We had a pleasant walk up the Montjoie valley to Les Contamines, it wasn’t too strenuous as it followed the river valley gently uphill pretty much all of the way. The top section of this walk was signposted as a snowshoe trail, but there was only an occasional splodge of snow in the shady corners. 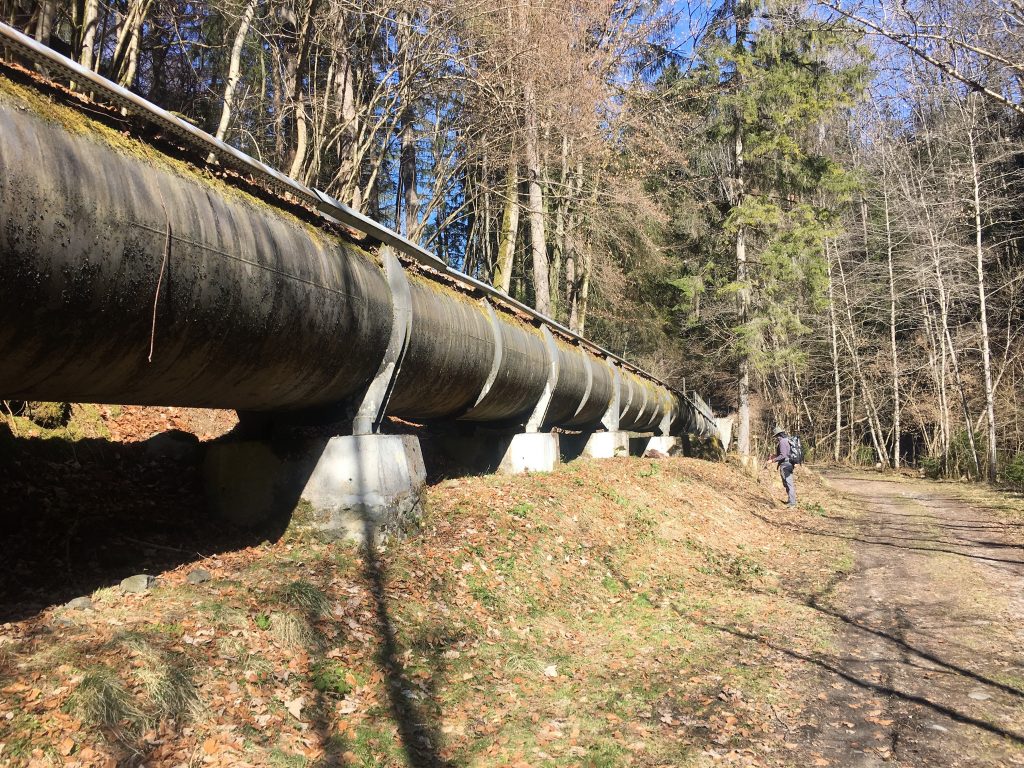 Huge hydro electric pipelines in the river valley, they ran next to older stonework that we presume was the original pipelines.

Spring flowers were in evidence everywhere, snowdrops and crocus, primroses and daffodils and even a few violets. Catkins dangled from the trees and a few leaves were starting to unfurl. The flanks of Mont Blanc were a constant accompaniment on the other side of the valley. Paul pointed out that the sound of traffic was also constant from the road that runs up the valley. I think I must have tuned it out. 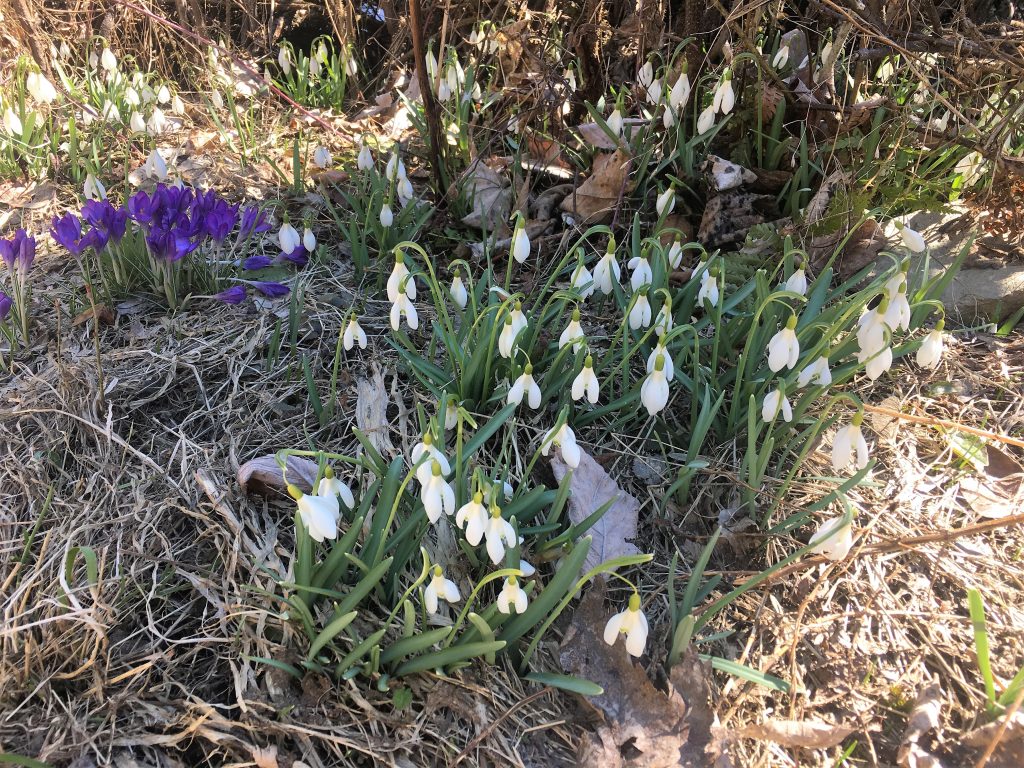 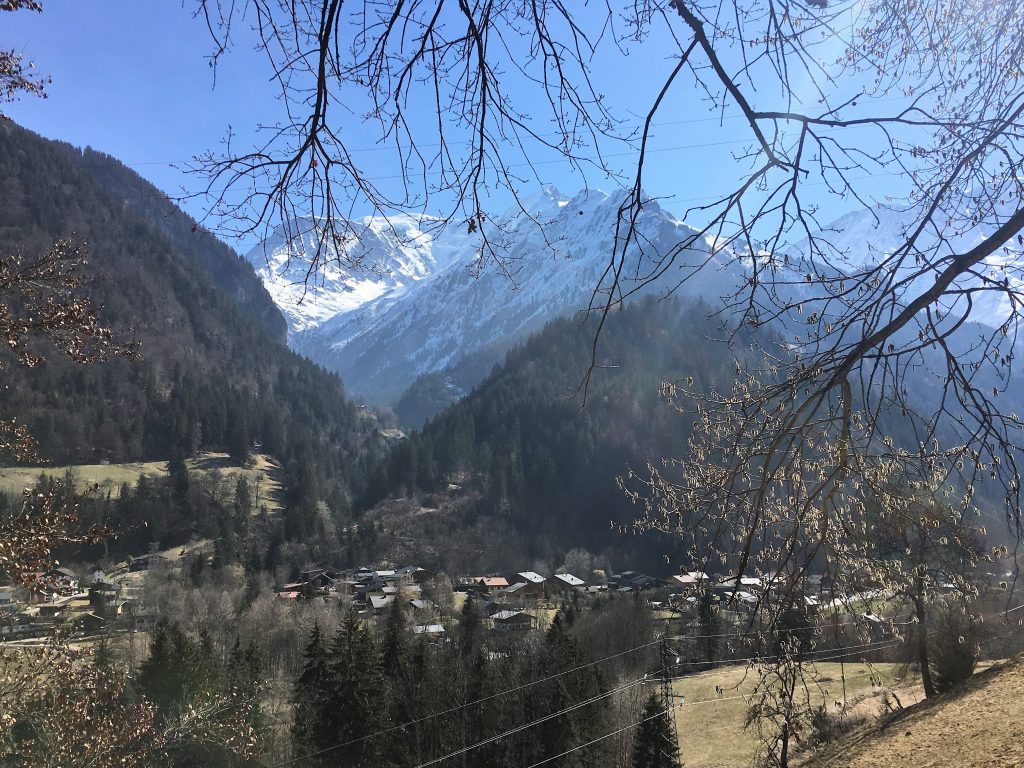 Looking at Mont Blanc between the catkins

The walk leaves from the aire, signposts can be seen near the bins and the path leaves the back of the higher tier of the car park. Sign posting is pretty consistently good all the way up the path, the only point where it fails is when it crosses the road just before Bionnay, here the signpost seems to indicate that you should follow the road uphill, but actually you need to cross the road and ascend the path up the steep bank on the other side. 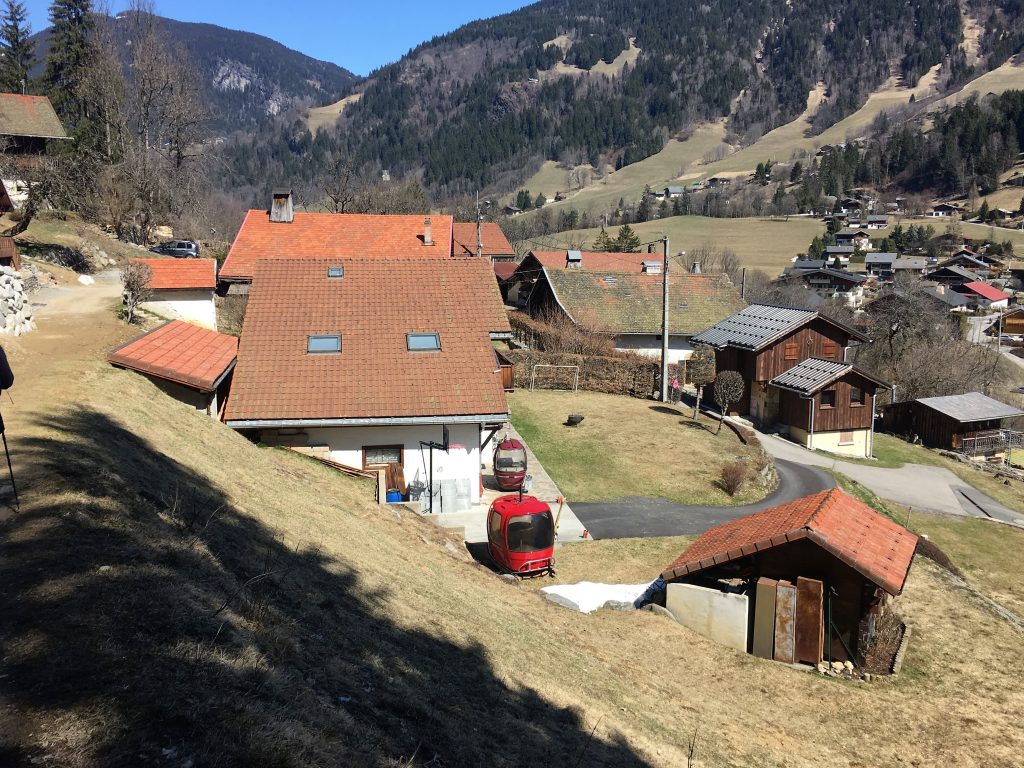 I’d like a lift or two in my back garden – a nice little summer house where I could relax and read a book or two.

We were a little disappointed when we found the path was also a VTT (mountain bike) route. It would have been a good cycle, whereas it was rather a tame walk. 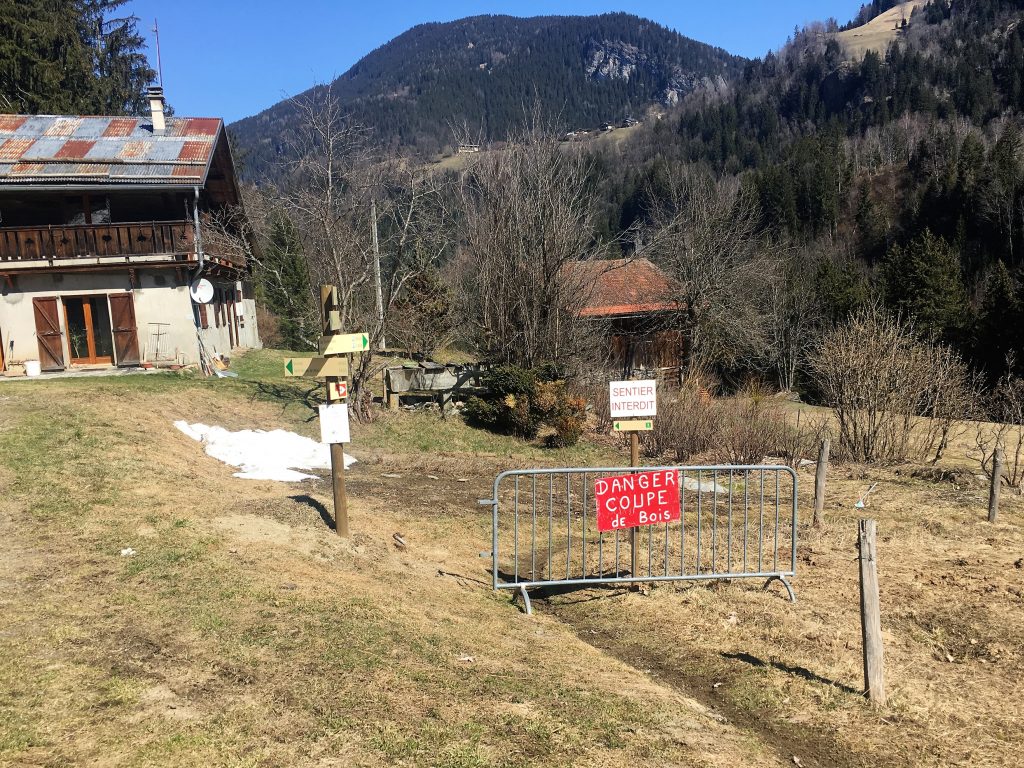