We have spent a lot of holidays in Scotland. We particularly love the west coast ‘where the mountains meet the sea’ and have spent many pre-motorhome holidays enjoying the mountains and the ocean. Plus, of course some of our early motorhome adventures were in Arran, Mull and Dumfries and Galloway

But there are places we tend to drive past rather than stop in, and this year it was time to give those places a chance.

Our first destination was Loch Lomond. We have frequently driven the road that runs along the western edge of the loch, but rarely stop for more than a few minutes to stretch the legs on our way to places further north and west. Its a busy, noisy road and it hadn’t given us an incentive to linger despite the beauty of the views.

Cashel Camping in the Forest

So I found myself investigating ways we could enjoy Loch Lomond away from the zooming bikes and lumbering trucks. Our key requirement was to be on the loch, able to get the kayak out and onto the water without having to leave the campsite. There are quite a few campsites on the edge of the loch and we determined on Cashel Camping in the Forest.

The campsite is on the east side of the loch, so away from the busy main road, but that brings its own small challenges with a moderately narrow road on the final approach which starts with a particularly sharp uphill bend as you exit Balmaha.

When we arrived we were both smitten with the location; on the loch, with islands in view and a beautiful mountain backdrop. We hadn’t been able to book a lochside pitch (they cost a premium, but none were available to give us that dilemma), but that didn’t matter, we still have a great view and the two caravans in front of us were unoccupied meaning we could wander down to the shore without going the longer way around. 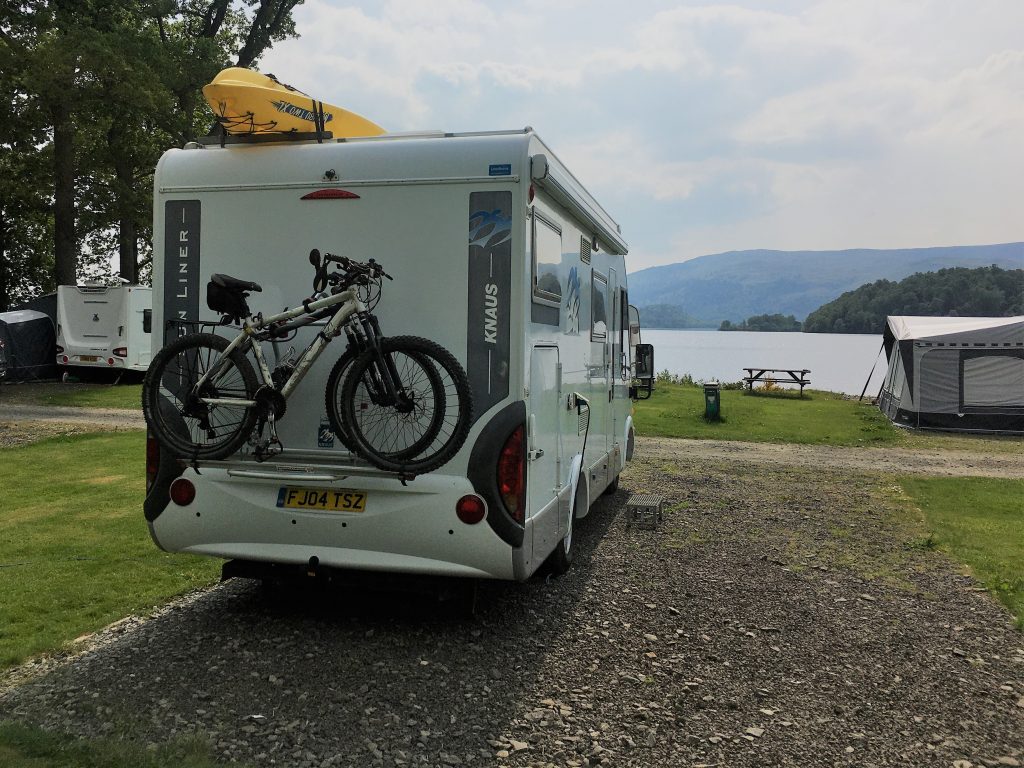 Parked Up at Cashel Camping in the Forest

As campsites go it’s fairly standard with regimented hard standings and a slightly more relaxed camping area for walkers. Showers supply piping hot water, with the ability to adjust the temperature, and a small shop provides the basic necessities.

The campsite can be prone to high winds, while we were there we had one evening where easterly winds plunged down from the ridge behind us and whipped through the campsite. We had an interesting half hour trying to save an awning on an unoccupied seasonal caravan. The awning didn’t look very well pitched and once we saw the bottom corner come loose we knew it didn’t have much of a chance. Nor did I have much chance of holding it down as it started to flap around. But with half a dozen of us clinging on we managed to subdue it and rescue the awning and the huge amounts of stuff that had been stored inside.

Kayaking and Swimming in Loch Lomond

Our delight with the campsite was aided by the beautiful weather we were experiencing. Day one was as warm and sunny a day as you could hope for. In fact it was so warm that even Paul, normally shy of potentially cold water, thought it was a perfect time for a swim. So our first experience of the loch was a dip in the refreshing water. Dip is probably the right word, as I’m not the most proficient open water swimmer and just enjoy bobbing around in the water with a casual breast-stroke. We also don’t have a tow float to make us visible to other water users so didn’t want to stray too far from shore. This is a busy loch and I wouldn’t feel safe (let alone capable) doing a serious swim without one. 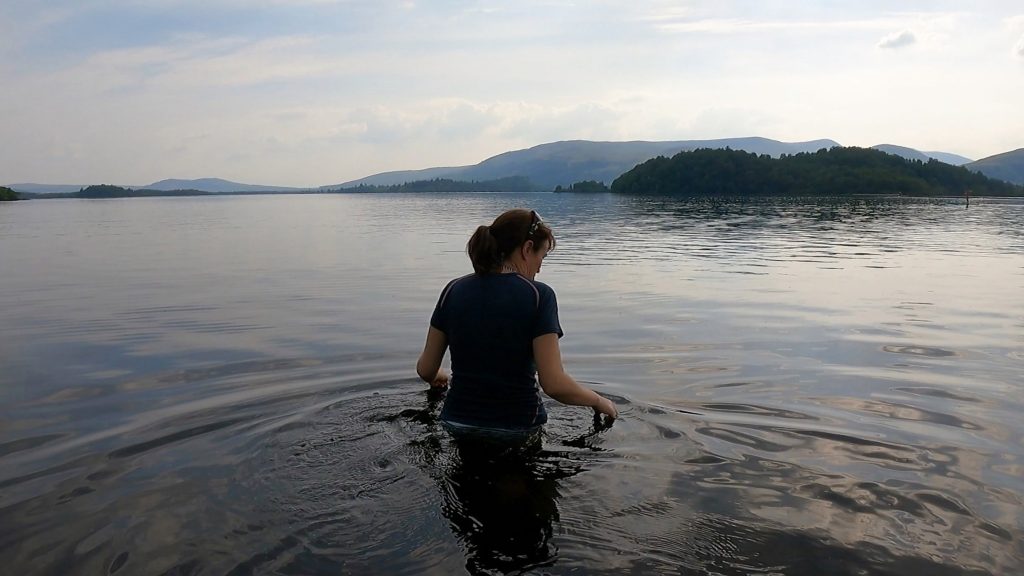 Heading into the beautiful calm water of the Loch

A note to dog owners and swimmers – the loch (as with a lot of lakes) can suffer from blue green algae. This can be toxic for swimmers and the local authority will post signs if there is believed to be any present.

The few days we spent here continued to be warm although they got progressively cooler and breezier. Our kayaking expectations were exceeded with such lovely weather and we were out most days. Kayaking around the loch and it’s islands was easier than being on the ocean, but when the wind picked up there was plenty of splashing for the poor schmuck in the front seat. 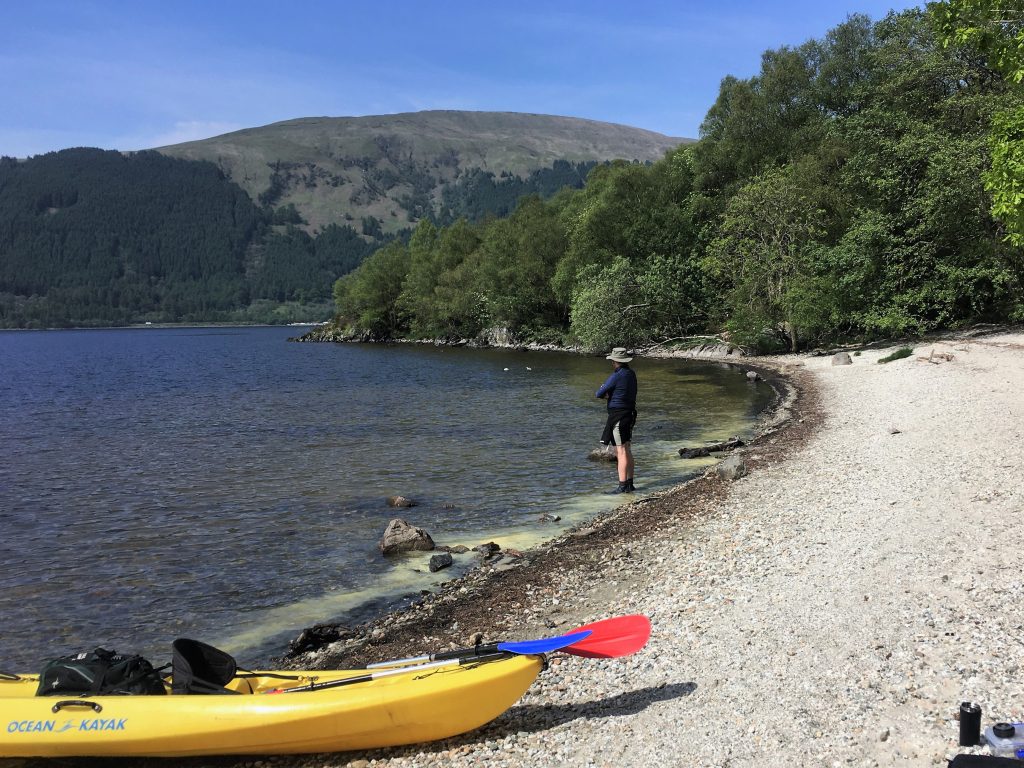 One of many idyllic beaches on Loch Lomond

We should have paid more attention to the buoys and signage when we pulled up on a beach on Inchcruin (or was it Inchmoan? there are a lot of Inches in the Loch) for a snack and cuppa. Carefully we stayed close to the shore as a sign on the beach told us that the island was a breeding area for Capercaillie. It was only when we left the island and investigated the line of yellow buoys that we realised the pair of birds of prey that had soared out from the trees on the edge of the bay were osprey. We had crossed a no go area, protection for the nesting osprey, and just assumed the line of buoys was prohibiting motorised vessels. Later we saw one of the osprey catching a fish from the loch, making an impressive splash as it hit the water and then laboured to take off again with it’s catch. No matter how much we waited we never managed to catch it on camera.

The West Highland Way (WHW) runs along this side of Loch Lomond, with many hikers using the campsite as a stop off point. This also means you have a lovely path running both north and south from the campsite. This gave us a way of stretching our legs after a kayaking session. There is also a forestry area opposite the campsite which provided a good post-dinner leg stretch. One afternoon we followed the WHW south to Balmaha for a drink at the bustling Oak Tree Inn, passing the very popular Milarrochy Bay which seemed more like a Cornish resort than a Scottish loch side. Another afternoon we went north to Rowardennan to the Clansman. If you had a whole day you could take the ferry across the water to the other side of the loch from either of these locations, perhaps join it up as a circular walk or cycle trip.

Despite the summer weather, coming north took us back in time to give us a second chance of spring with bluebells in the forests, the lime green of new leaf growth and the sound of cuckoos as we wandered through the trees. 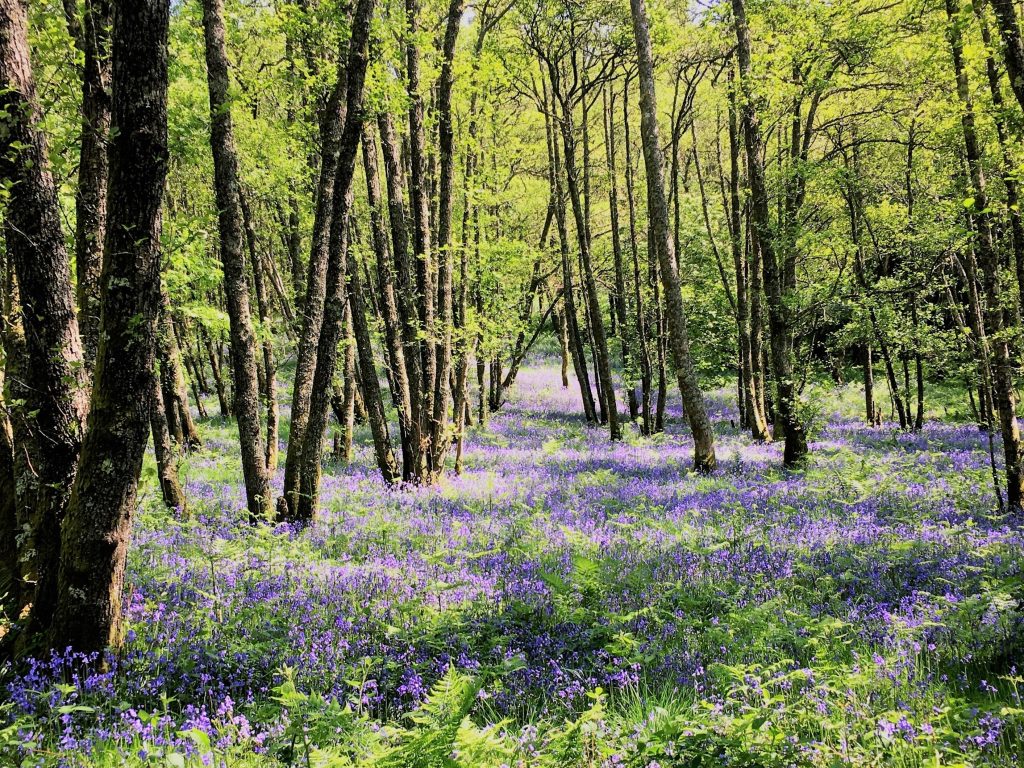 Bluebells along the West Highland Way

While we were here we also wanted to tick Ben Lomond off our list of Munros. Somehow we chose the only day when it rained to take on the mountain. The forecast had been for early morning rain so we waited for it to dry up before we left the campsite. We were cycling to the carpark at the start of the walk to avoid the risk of finding a car park too full for Bertie. So we set off along damp roads the 9km to our start point.

From the car park we could see the cloud lingering on the summit but we were hopeful that it would clear as we ascended. The climb up the tourist path started as a warm and muggy affair through pretty woodland, but as we climbed onto the open hillside and ascended the shoulder of the mountain the cloud descended and from about 600m we were enveloped in it’s misty claggy dullness. It’s a busy mountain and so we ascended past family groups (including a delightful child who lay in wait to throw stones at us), and were ourselves overtaken by groups of fit young things. Then we started to meet many descending parties in the mist. It was only on stopping for a cuppa that I checked the map and realised we were nearly at the top. 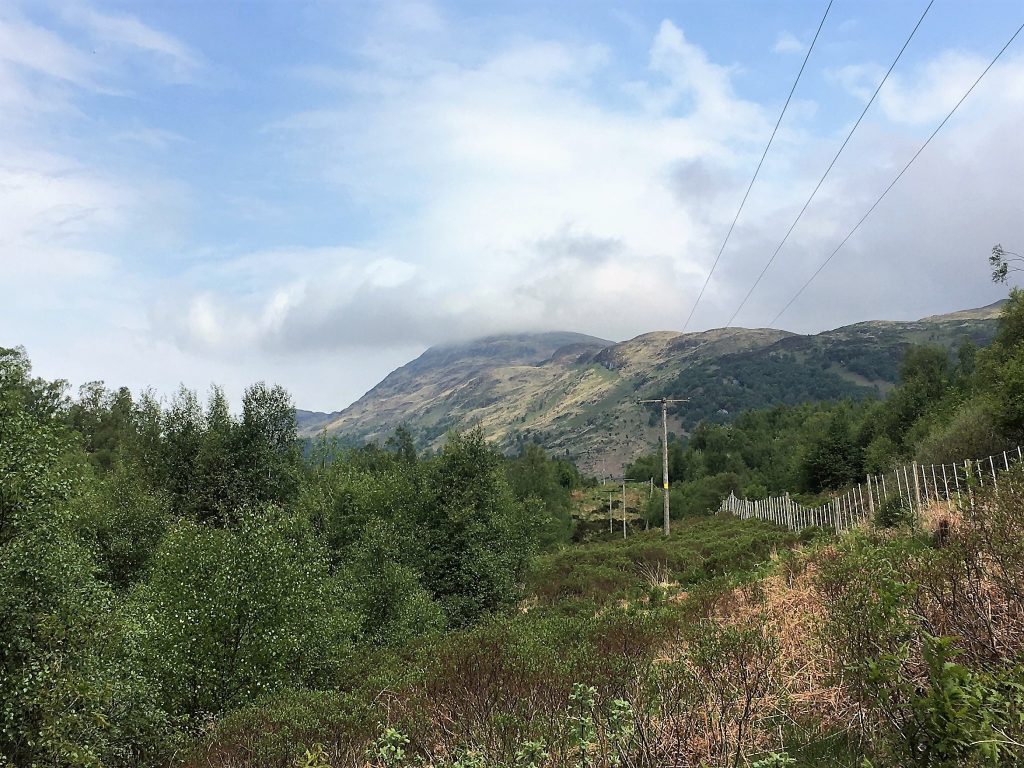 At this point we though the cloud might lift 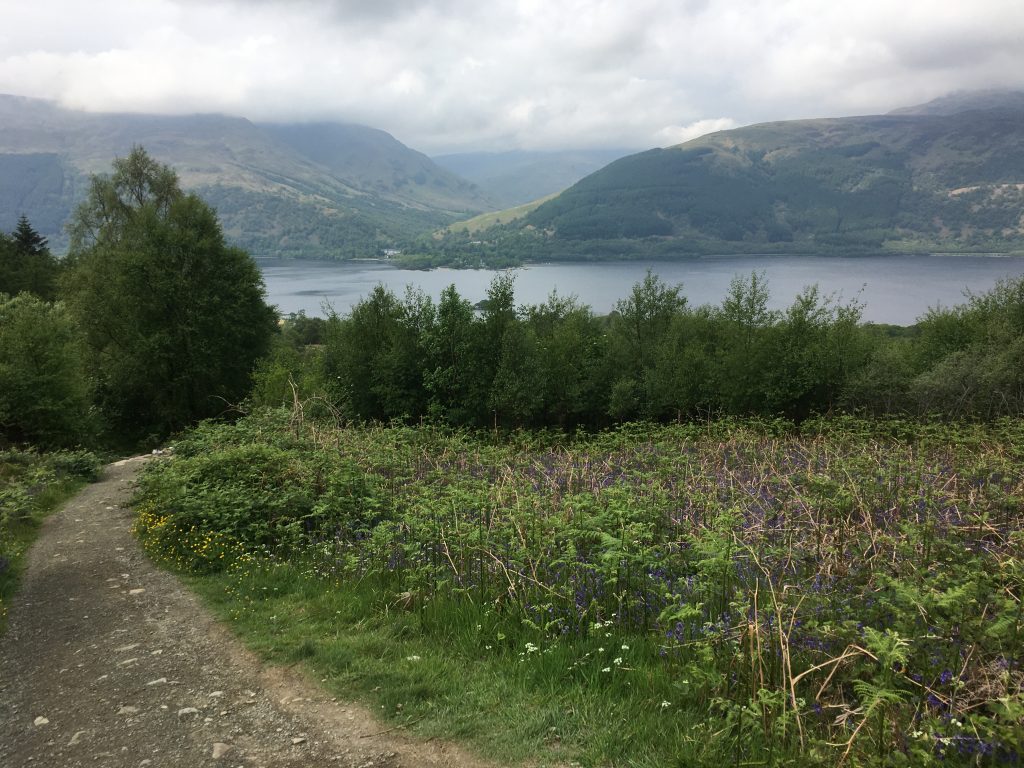 The well made ‘Tourist Route’ up Ben Lomond

When we reached the trig point we were resigned to a cloudy descent, we made our way to the past the summit onto a path far less trodden that would take us down a short section of very easy rocky scrambling onto the Ptarmigan ridge. Paul called out to me as he spotted what might have been a view in the swirling mist. A surprise view of the steel grey loch, studded with darker grey islands, opened up briefly below us, It wasn’t much of a view but it was more than we’d seen for a while, and as we descended we saw more breaks in the cloud, giving us spoiler glimpses of the path ahead and the view below. 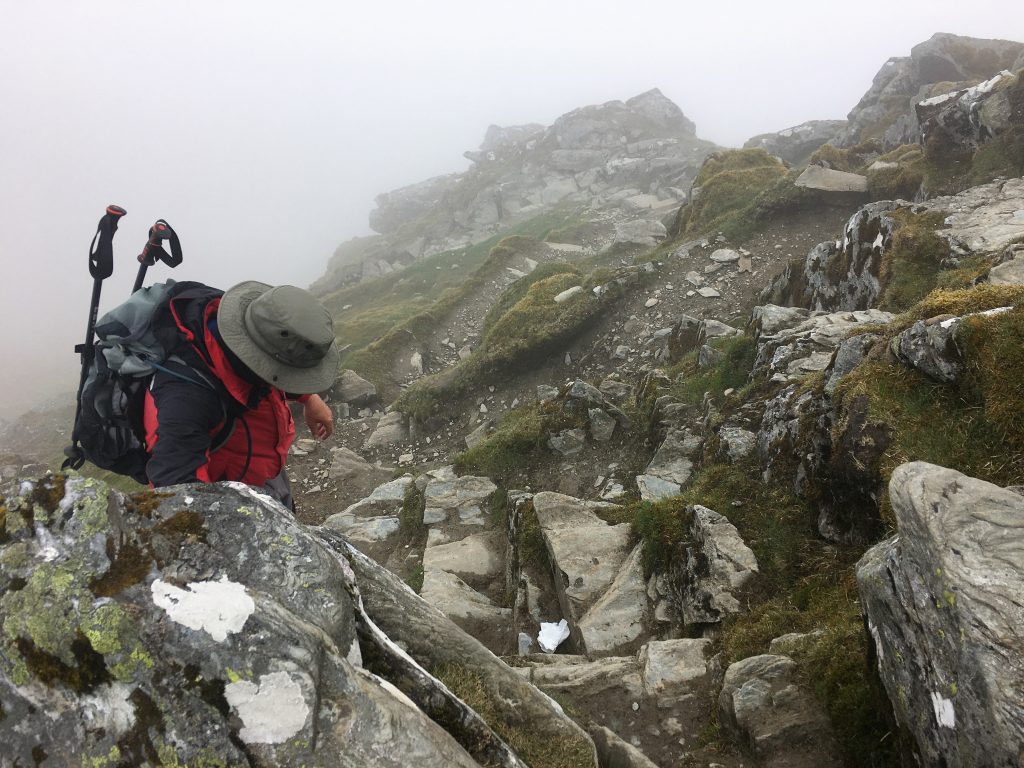 Descending the initial rocky steps from the summit 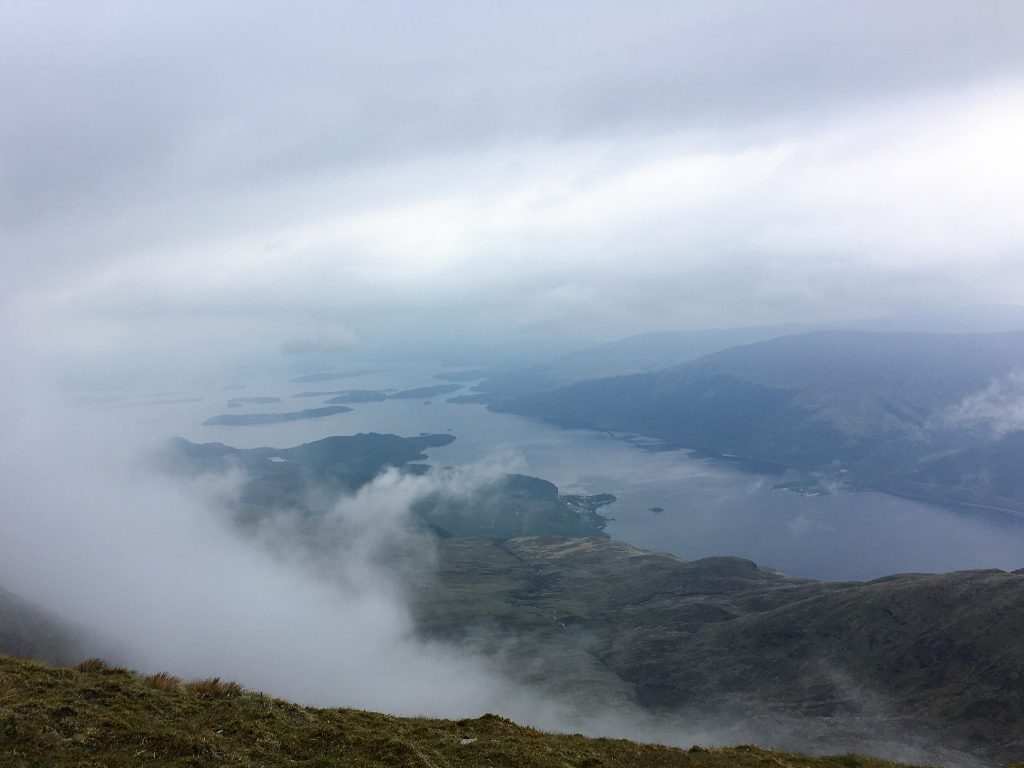 Views appearing in the mist 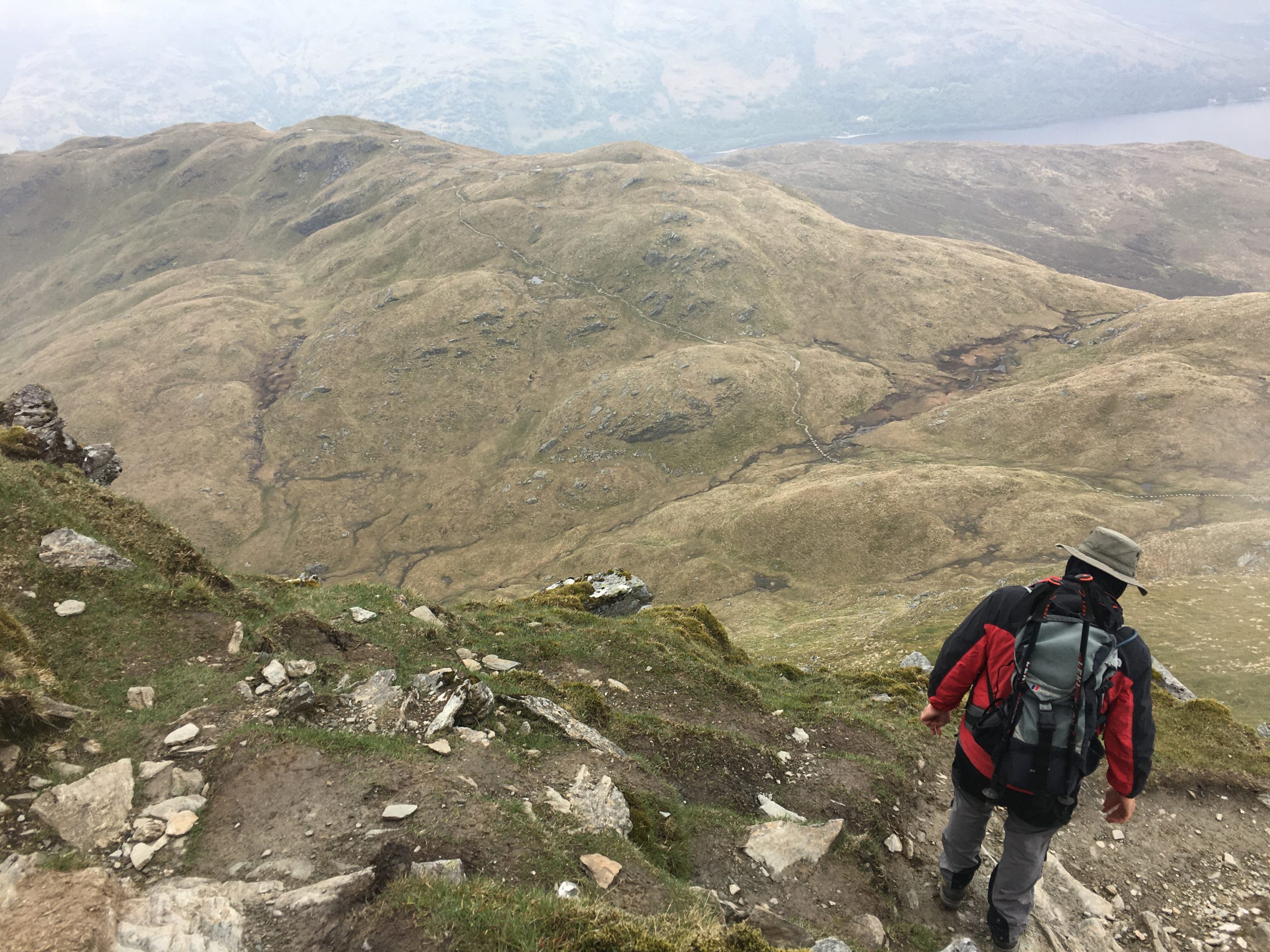 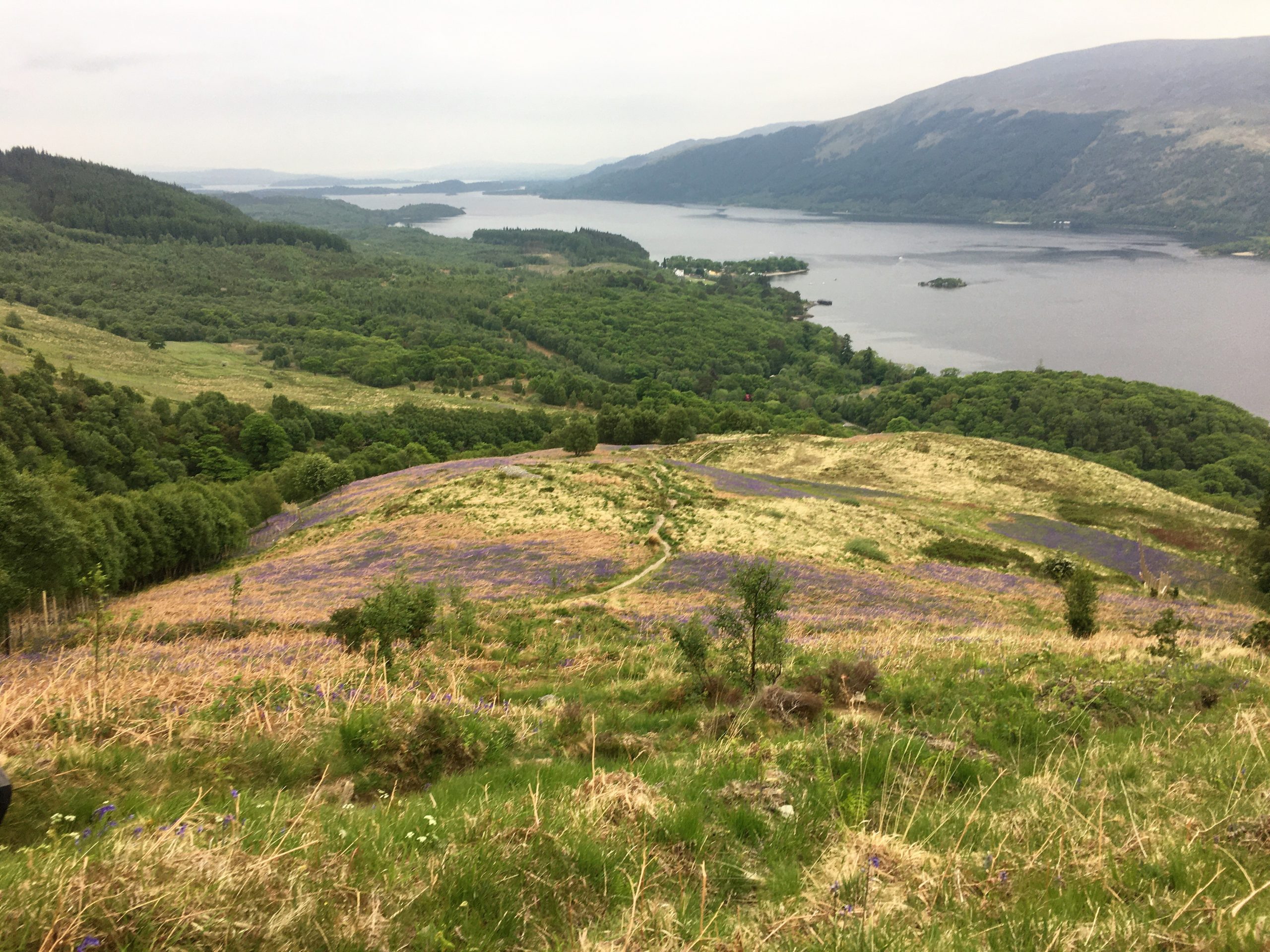 More bluebells on the descent to Rowardennan

The Ptarmigan ridge is a bumpy rocky ridge on the west side of Ben Lomond that turned what might have been a fairly dull up and down of the mountain into a more interesting circular route. Apart from the very top it’s an easy enough walk with a well made path across boggy and rocky sections. We even saw it’s namesake bird, carefully camouflaged against the rock and holding still in the hope that we couldn’t see it. 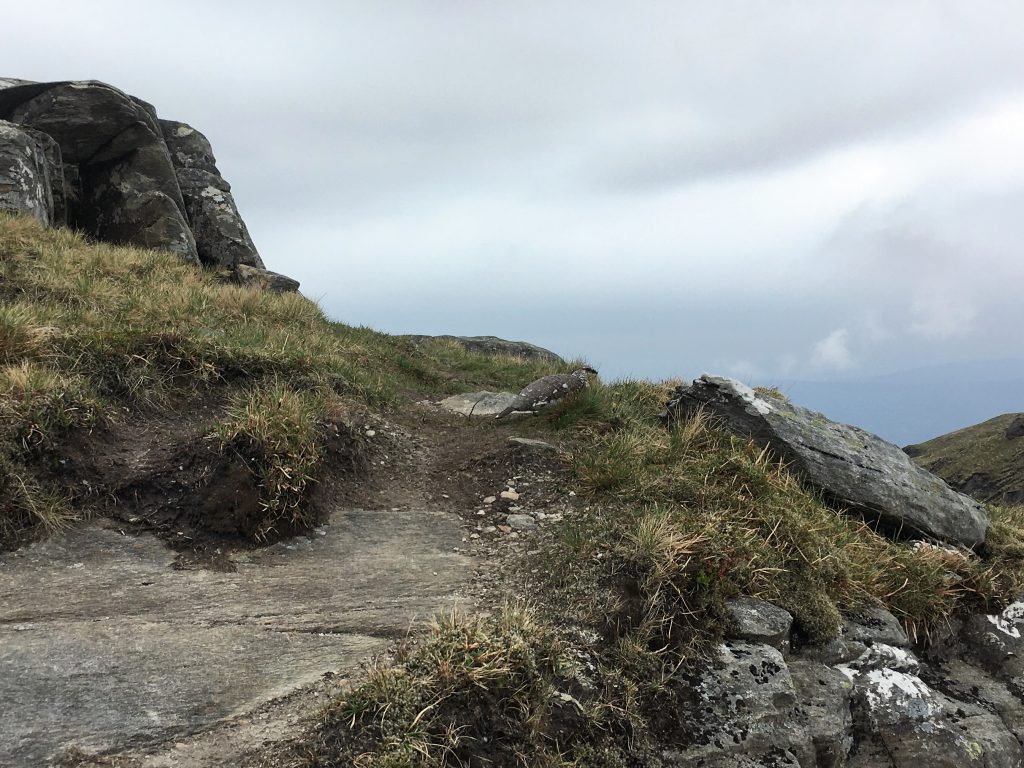 As we descended the last section to the car park the rain started again. It didnt stop until after we’d got back to the campsite and we were a pair of very bedraggled cyclists that returned to Bertie. Glad of the warm campsite showers and some shelter. 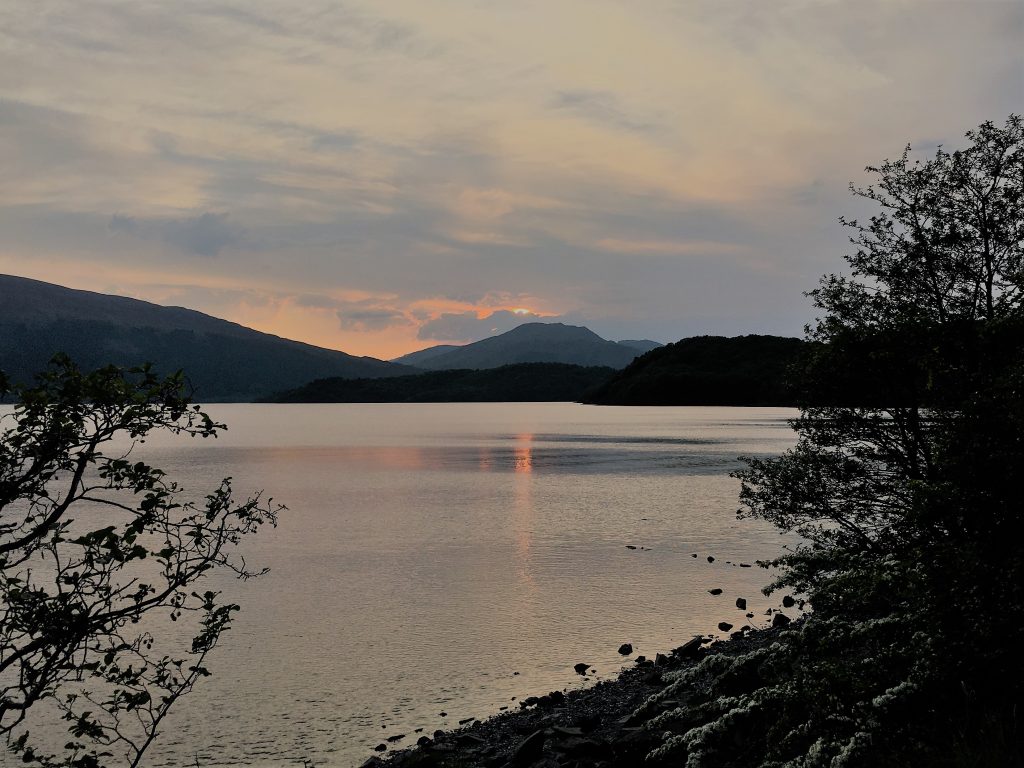 One of many beautiful sunsets over Loch Lomond