Lochranza is a village on the northern coast of Arran, set alongside a small sea loch. I don’t know when a bay or inlet becomes a loch, but the name makes it quite clear, this is definitely a loch. 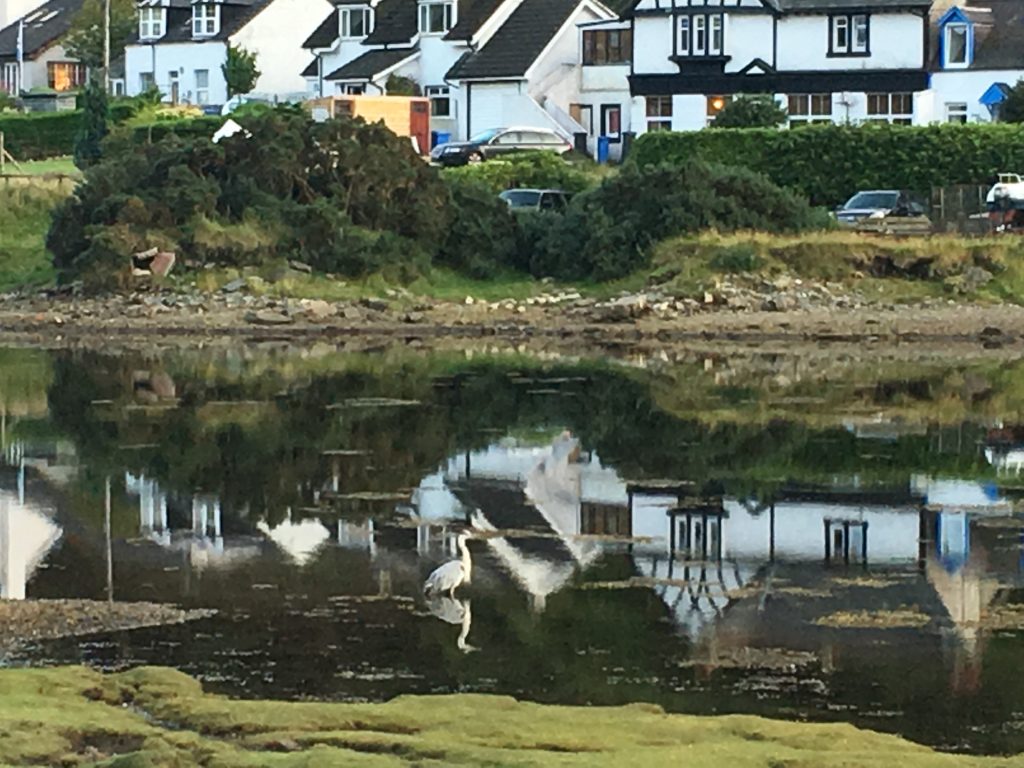 We had parked on the near end of a spit of land which juts out into the loch, not quite cutting off the inland end of the loch from the sea. On this spit of land stands Lochranza castle. It was closed when we arrived but we looked forward to having a look around the following day. 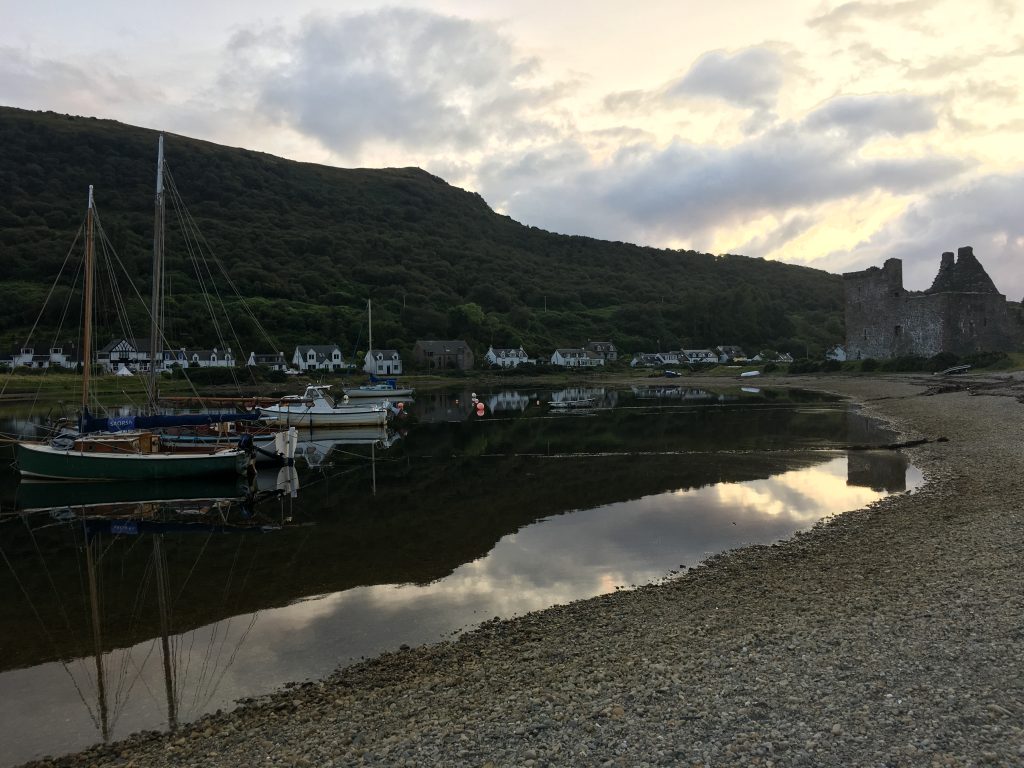 We would be coming back to Lochranza later in this trip to get the ferry that runs between Lochranza and Claonaig on the Kintyre peninsular, but for the time being we were using it as a base for another coastpath walk which would take in Hutton’s Unconformity (a geological feature) and the Cock of Arran (titter yet not) as we walked to Laggan cottage and back again.

We set off initially through Lochranza and past the golf course, Scotland wouldn’t be Scotland without a golf course or two, and Arran lives up to it’s reputation as ‘Scotland in Miniature’ not just because of it’s geographic diversity but also because it has golf courses everywhere you look. Here we saw a group of stags nonchalantly lazing on the fairway which gave us a reason to pause and take a quick photo. 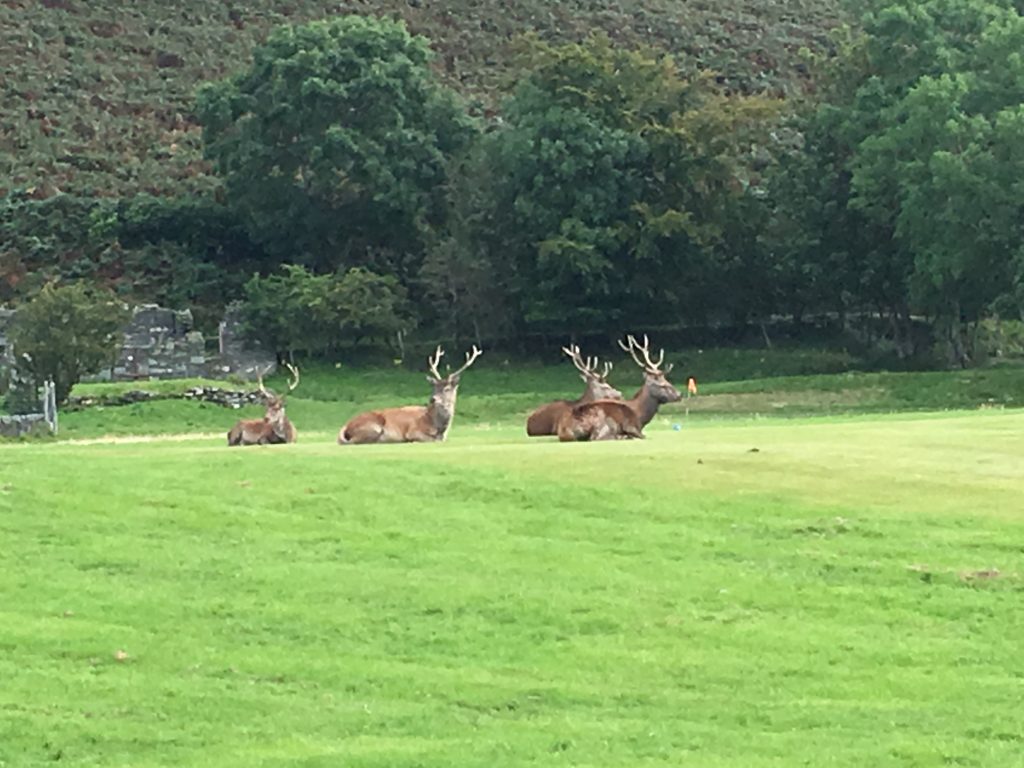 A new hazard on the fairway

The path continued around the northern side of the loch, past a string of rather nice houses with their gardens protected by deer proof fences before heading onto the coast proper. It was easy going underfoot for much of the first couple of miles. We passed by the old croft style buildings at the ‘Fairy Dell’ and then reached the main obstacle of the walk – the An Scriodan boulders – a tumble of large boulders left by a cliff fall that used to pose a problem for walkers who had to navigate around and over them to continue the walk. Perhaps it was slightly masochistic of me, but the work that has been done to create a clear pathway through the boulders has taken some of the fun out of the walk, and although the pathway involves some steps up rocks and there were one or two occasions when hand touched rock it didn’t seem all that exciting. 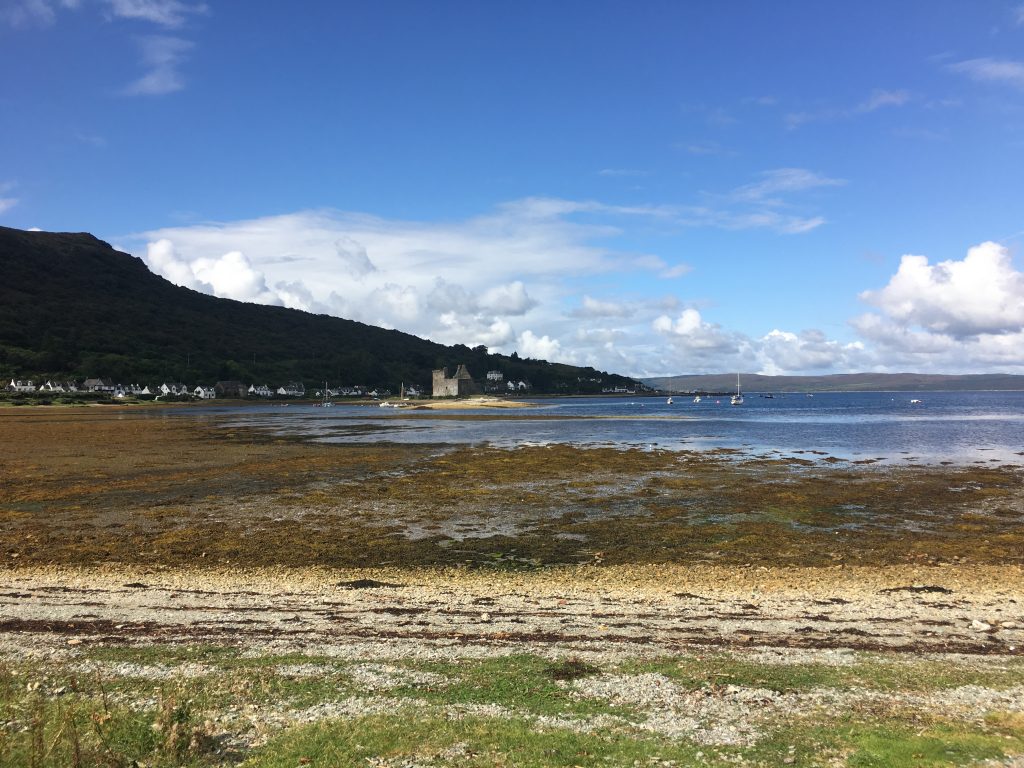 View to Lochranza from the early stages of the walk

Once we were past here we were approaching the Cock of Arran, I am a bit confused as to the actual identity of this feature; some guide books say that it is a large boulder that apparently once resembled a cockerel and was used as a navigational aid, some say that it is the most northerly point of the island. We chose to believe that it was the boulder, but who knows. This boulder is red sandstone, and the beach has large eroded slabs of the same red sandstone that are quite striking and bear a strong resemblance to the sandstone features of Orcombe point at home in Exmouth. We sat here for a while looking for wildlife, no sea mammals today but we did see plenty of gannets diving for fish out to sea. 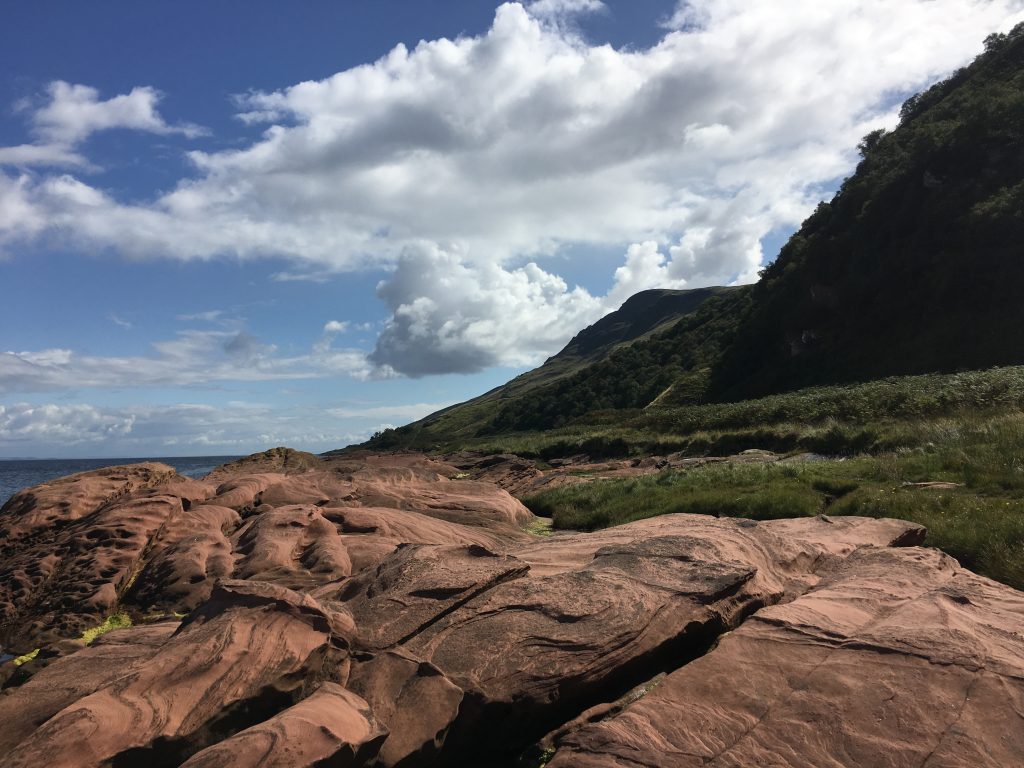 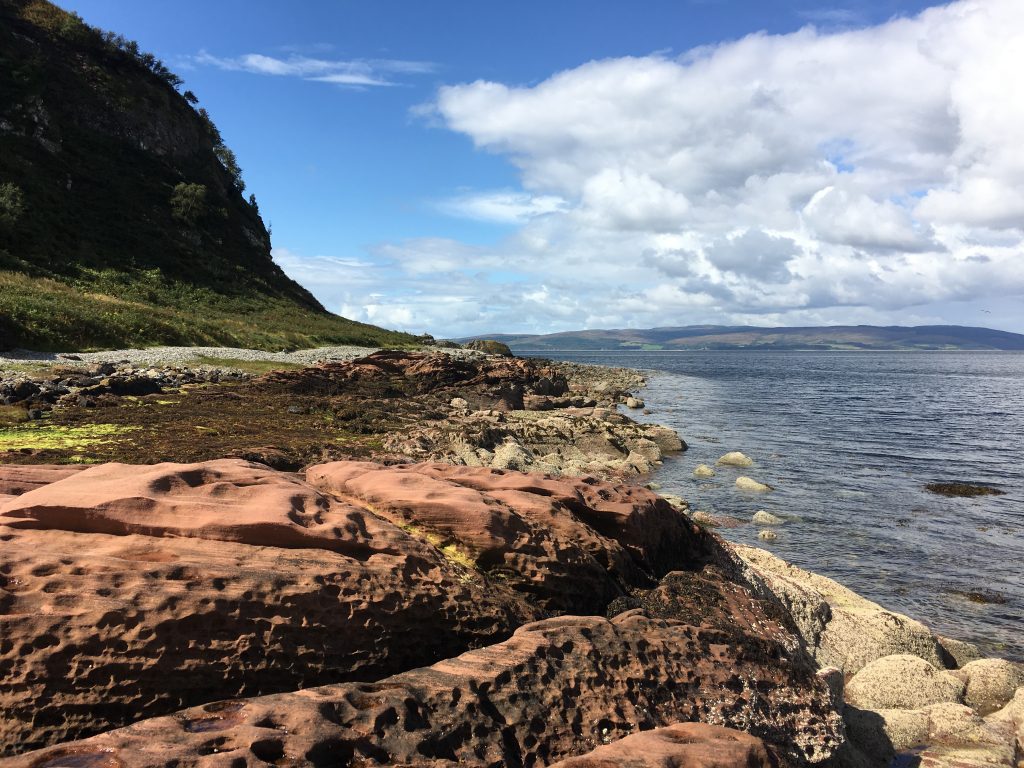 We continued on past the unimpressive Ossian’s cave – which we later found out was wrongly identified on the OS map and some old buildings which used to be associated with salt panning that took place here, using locally sourced coal to heat the sea water. We could see Laggan cottage but decided to turn around before we reached it and retrace our steps.

We never did identify the exact position of Hutton’s unconformity, but this feature is apparently not very exciting to look at. It is more exciting for it’s place in the history of science and geology in particular. The presence of successive layers of different types of rocks, at different angles were part of the evidence that Hutton – the ‘Father of Modern Geology’ – used to support his theory of geological processes, which included a proposal that the Earth was far older than the accepted age. The Lochranza unconformity was the first such example that he found but not the best and he went on to find various unconformities around the country.

When we finally returned to Lochranza the castle was open and we were able to take a look around this 13th century building. It is one of many castles that are maintained by Historic Scotland and is free to visit. There were some interesting snippets of information around the building explaining the way in which the building had originally been set up (as a ‘hall house’ with storage on the ground floor, a large public hall on the first floor and other more private rooms on the upper floor) and then modified through successive generations. 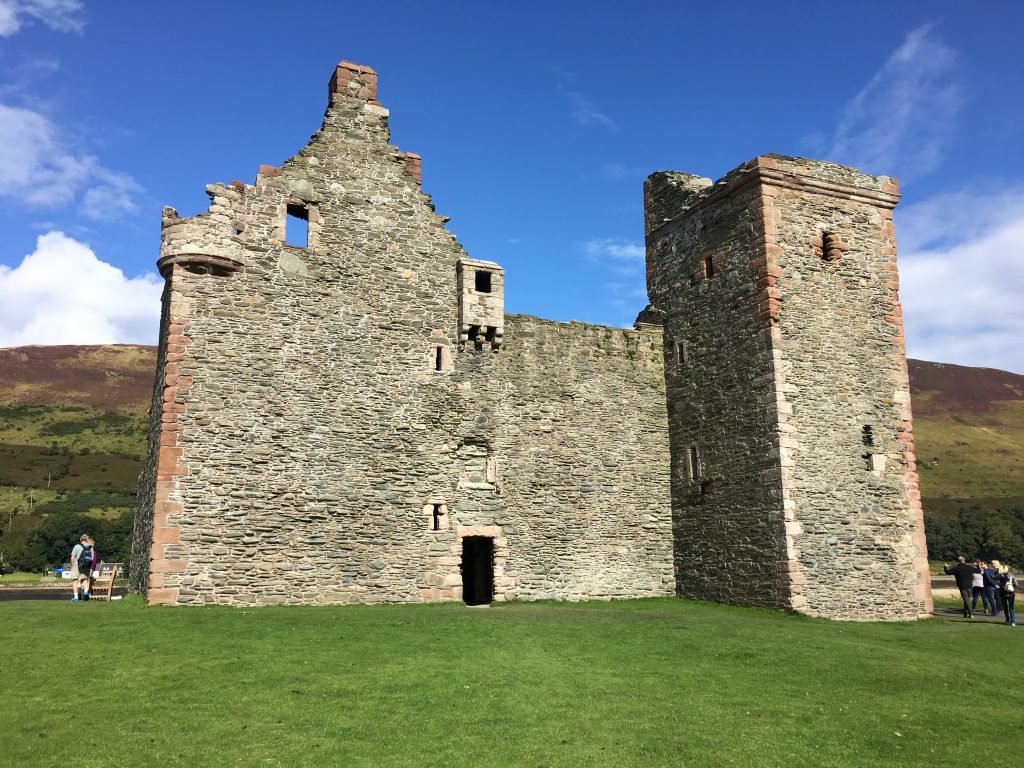 It had been a good day, although we felt that the walk had been much touted as ‘the best coast walk’ on Arran and we hadn’t enjoyed it as much as the one from Kildonan.

The day wasn’t over as we had some jobs to do, we were planning to climb Goatfell the following day, but also needed to empty our toilet and refill our water. We drove through the scenic mountain road back to Whiting Bay, and as we drove past. Rodrick realised we had managed to complete a full circuit of the island. With Bertie refreshed we then retraced our steps back up to Corrie where we parked in a picnic spot south of the village not far from the start of the following morning’s walk.

1 thought on “The Cock of Arran”