Goatfell is the highest mountain on Arran and we had been looking for a suitable day to climb it before we left. Although we had had plenty of decent weather at sea level, the tops of the mountains had mostly been obscured by cloud. This Friday was our best opportunity.

Arran’s range of mountains offers plenty of walking and ideally we would have been able to do two or three mountain walks, but this looked like our only reasonable chance of seeing views from the summits, and we’re not that interested in climbing mountains without a view. Never mind – it gives us a reason to come back.

None of Arran’s mountains are the Munros (mountains that are over 3000 feet) that most people get excited about, instead they are mostly Corbetts (between 2500 and 3000 feet), which always makes me think of the Two Ronnies ‘and it’s goodnight from him’. Other classifications of mountains are Grahams (between 2000 and 2500 feet high) and Marilyns (mountains which have a ‘prominence’ of 150 meters above the surrounding land). There are many more classifications of mountains depending on what you think constitutes a ‘top’. Who would have thought it would get so complicated? It reminds me of conversations we used to have at work when someone wanted to implement a business solution for something ‘really simple’.

Despite Goatfell only being a Corbett, it doesn’t lack for interest; the peak can clearly be seen above Brodick, seeming to stand alone although it is part of a more complex ridge, the tops offer some scrambling over granite tors (similar to Dartmoor’s tors but at a higher altitude) and the views across the other mountains are incredible. 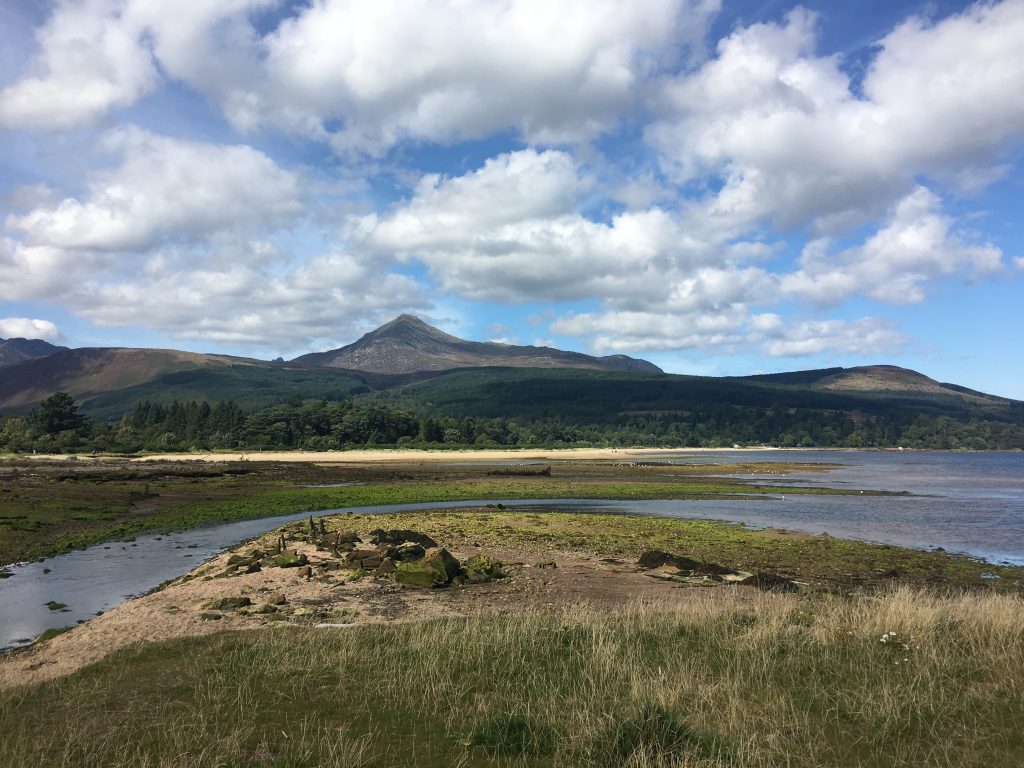 It’s also pretty easy to walk up using the long but gentle ‘tourist’ ascent that starts in Brodick. We chose to avoid this route up, instead taking a slightly steeper and shorter route up from Corrie via the top of North Goatfell. This gave us a greater chance of some peace and quite on the walk and also some scrambling along the short ridge between North Goatfell and Goatfell itself.

We started as early as we could rouse ourselves from our bed (not that early as our mornings have become quite lazy) and walked along the coast road from our parking spot to the point where the path headed inland. From there the path climbed up through woodland onto the open moor, we were following Corrie Burn and could hear it’s waterfalls but not see it until we were out of the trees; it had the look of a waterslide, with gentle smoothly eroded drops that you could imagine riding down on an inflatable ring.

When we got to the point that the path split we took the right hand fork up through the coire to the saddle between North Goatfell and Mullach Buidhe. This was when the views started to kick in as we were able to see the crenellated top of Caisteal Abhail, the deep valley of Glen Sannox and the steep drop and ascent back up to Cir Mhor from here. We had a short rest for photos and to eye up the ridge we would walk along to North Goatfell and eventually Goatfell itself. 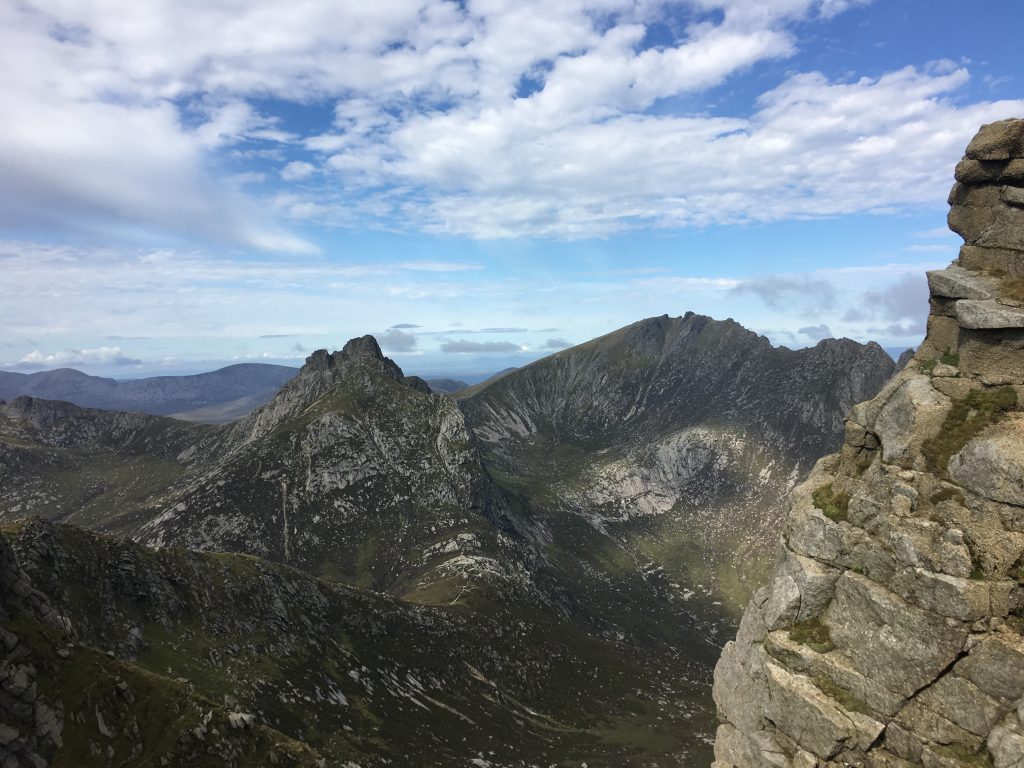 View of the mountain range from the saddle

The ridge was fun with lots of scrambling opportunities, although you could bypass them all via a path lower down. We stuck to the ridge line following the scratches of crampons across the rocks, and handily placed rocks (cairns of one) that marked the route. There were some interesting descents where these marks were key to ensuring that we knew the right way down and didn’t get stranded on a ledge on the side of the mountain. The only thorn in my side (almost literally) was that I had my walking poles on my rucksack. This was a bit of an experiment as I like to use poles on downhill slopes, but don’t tend to take them on scrambling walks because they can be awkward, true to expectations they kept getting caught on rocks and although they forced me to spend more time facing the rock (the better way to climb down) and less time sliding down rocks on my bottom they were a pain.

Approaching the summit we could hear voices and as expected there were many people (at least twenty) sharing the summit with us and we could see more making their way up the path from Brodick. We quickly found ourselves a sheltered scoop in the rock where we could sit and eat our lunch out of the wind; picnic spots were getting scarce.

The way down followed the east ridge of Goatfell until we descended back down to Corrie Burn again and re-joined the path at the point it had divided earlier. I did use one of my walking poles on the way down, after all I had suffered to get them up there, and it was a great help to me picking my way down hill, but I’m not sure they were worth the hassle. I many have to look into buying some more modern poles that fold up a lot smaller and can fit inside a rucksack. 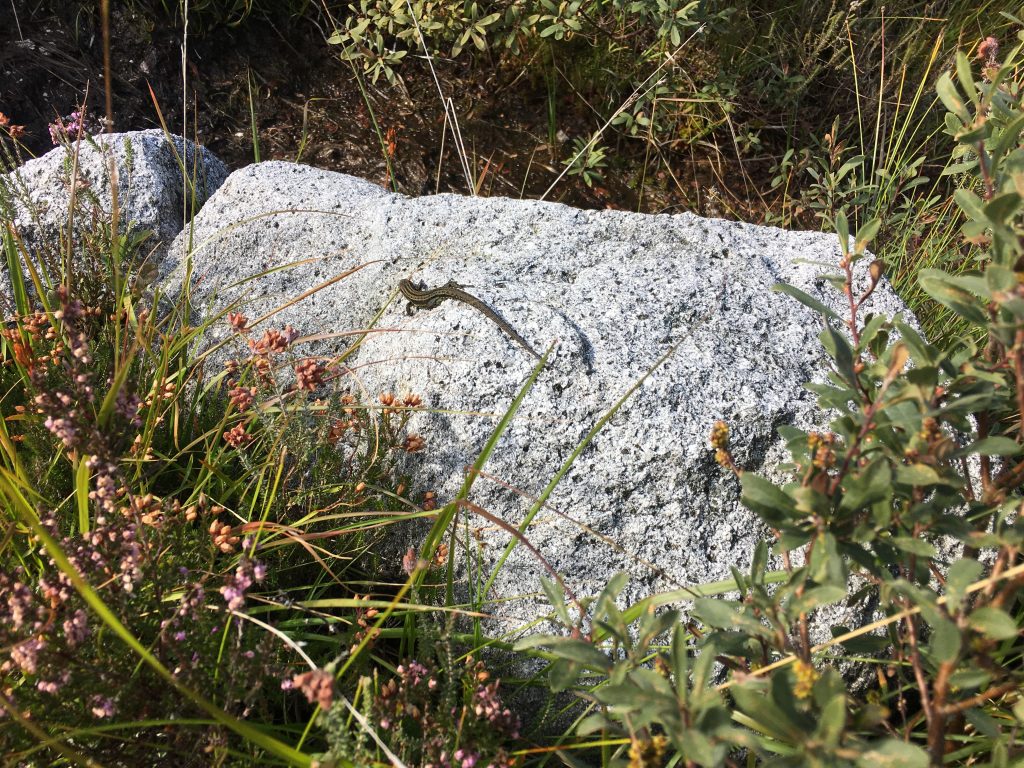 Common lizard basking in the sunshine

We were down from Goatfell pretty early after our early start and had the whole afternoon to chill out and watch the view from our parking spot. Lazily we decided not to move on!