We had parked at King’s Cave deliberately … to visit King’s Cave of course. So the next morning we took a stroll down to the coast to see one of Arran’s famous tourist attractions.

There is a circular route from the car park which goes through forest and picks a path down the cliff with views of the fort at Blackwaterfoot. The forest floor was heavily carpeted with moss and there were plenty of mushrooms glowing with a gentle luminescence against the dark backdrop of the forest floor. Mostly they were the rather prosaically named ‘Sickener’. 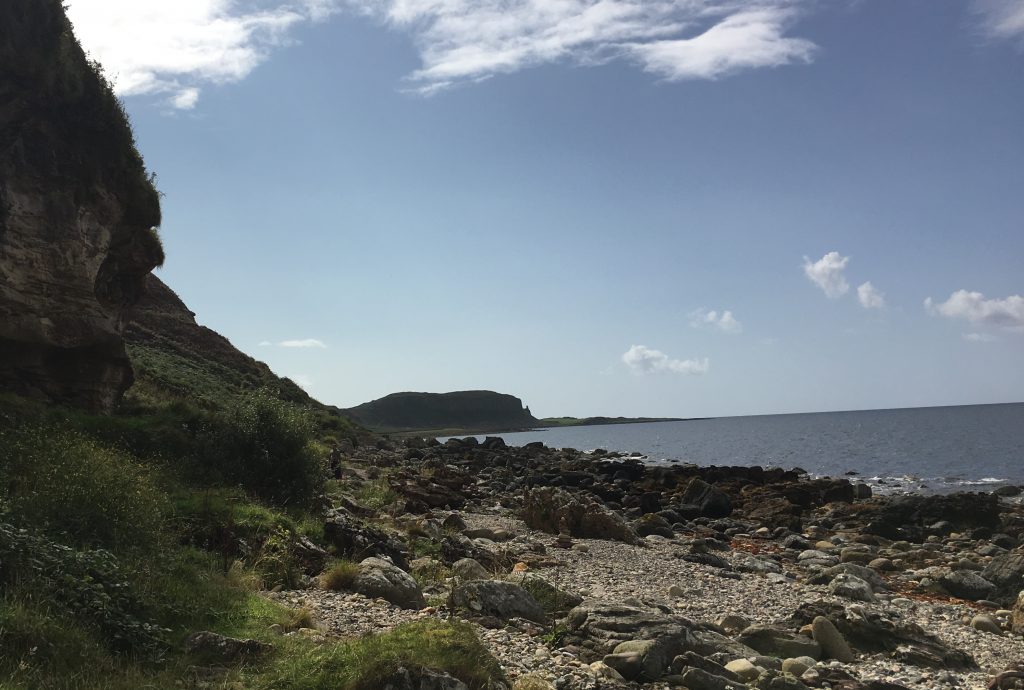 The King’s Cave is one of a number of caves cut into the sandstone cliffs along this stretch of coast. The caves were originally caused by sea erosion until the events that caused the raised beach around Arran. The series of arches was far more impressive than the previous day’s Black Cave. The King’s Cave itself is said to be the cave in which Robert the Bruce watched the spider ‘try try again’ to build it’s web. Although that is highly unlikely, the real draw here is the graffiti on the walls, some ancient and some relatively modern. Instead of graffiti, the modern way of making a mark here is to balance stones into towers, covering the beach and cave floors like lumpy stalagmites. 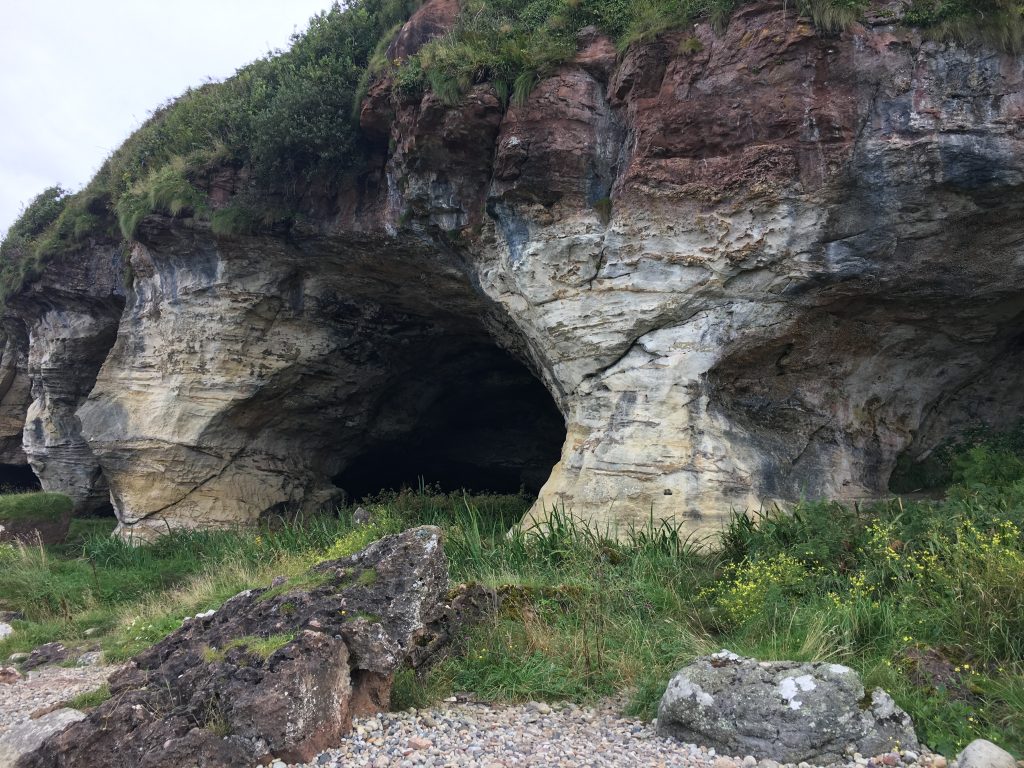 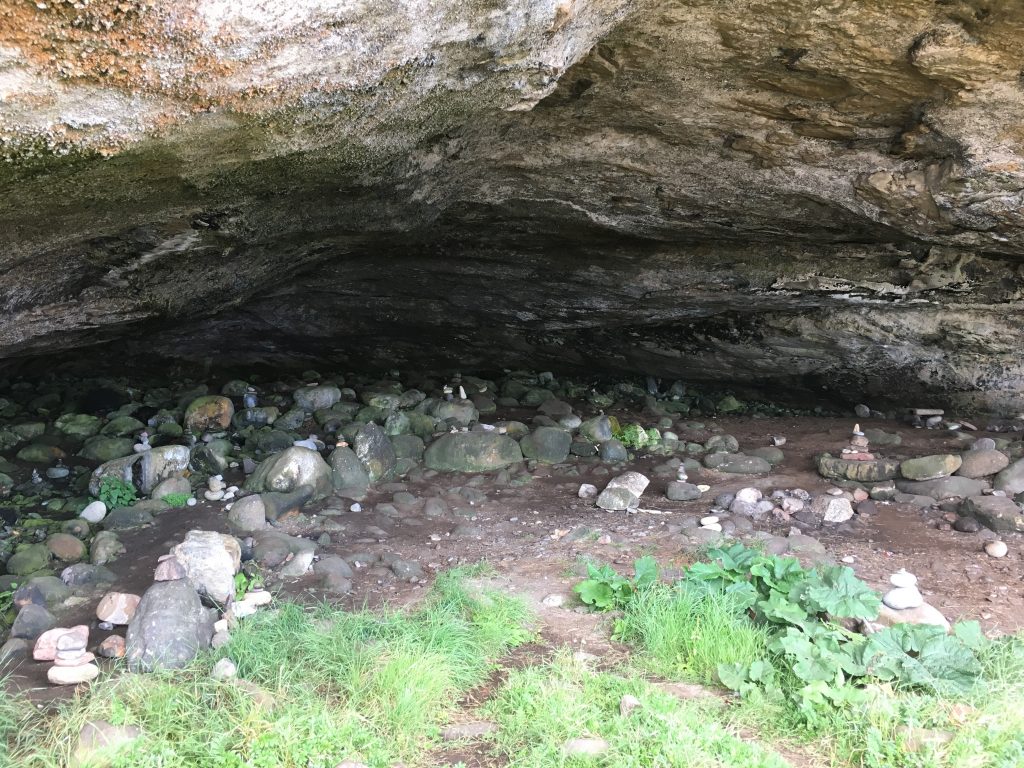 The small stone cairns that have been left by recent visitors 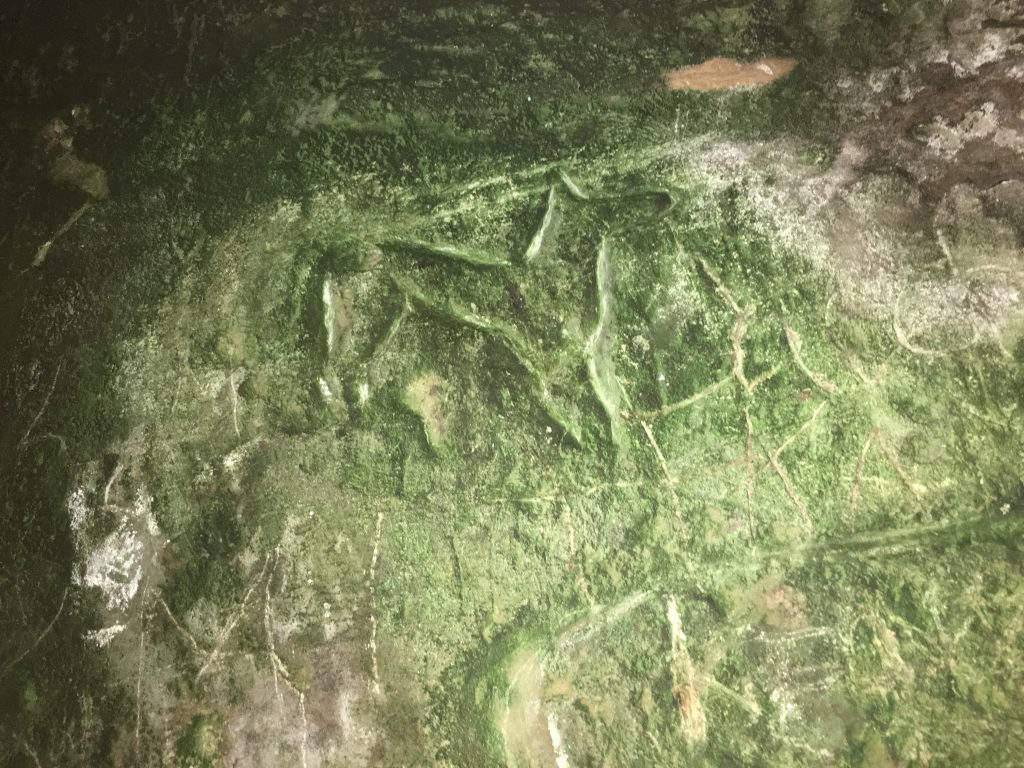 Some of the older graffiti in the cave 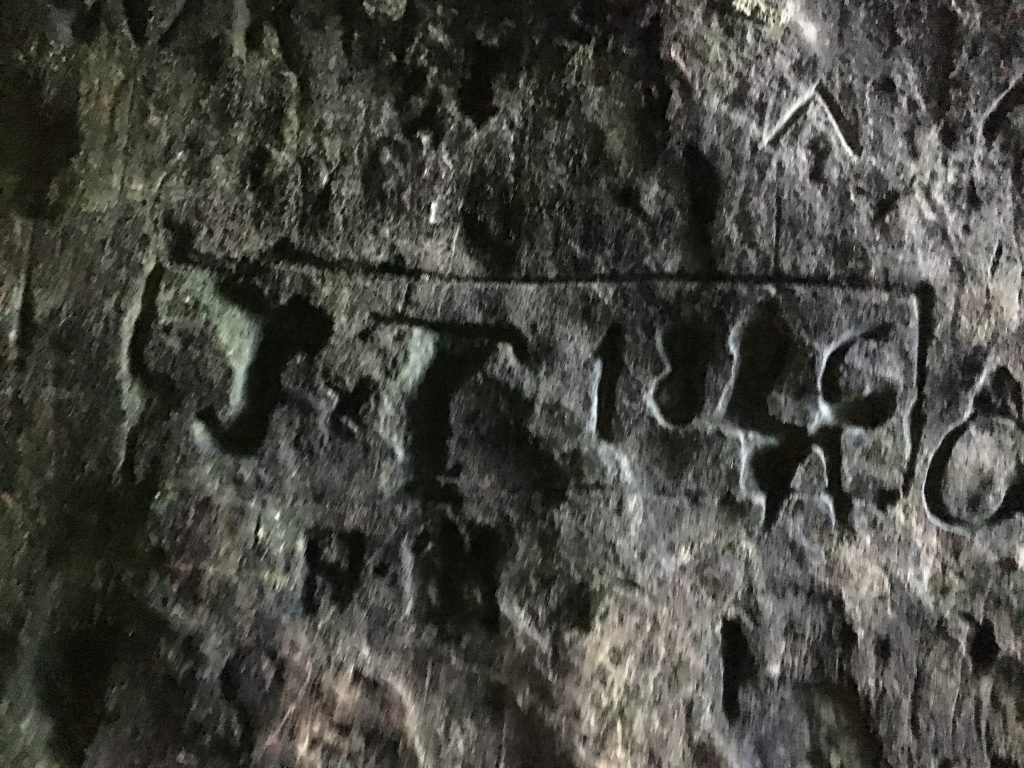 After spending a little time at the caves it was starting to get busy and we wandered back up  to the car park which we found to be full. Our plan had been to drive on down the road to the next tourist spot, but given how busy it was here we thought we might have difficulty getting parked, so we got the bikes off the back of Bertie and cycled to the Machrie stone circles.

Machrie Moor sits south of the mountainous area of Arran and is the site of many Neolithic antiquities. Hut circles, cists, cairns and burial mounds as well as the stone circles. There is a farm track that takes you out to the main grouping of stones but many more on the moor if you want to explore. All this with the dramatic backdrop of the mountains. Even Paul was impressed, although he was heard to say ‘not another one’. 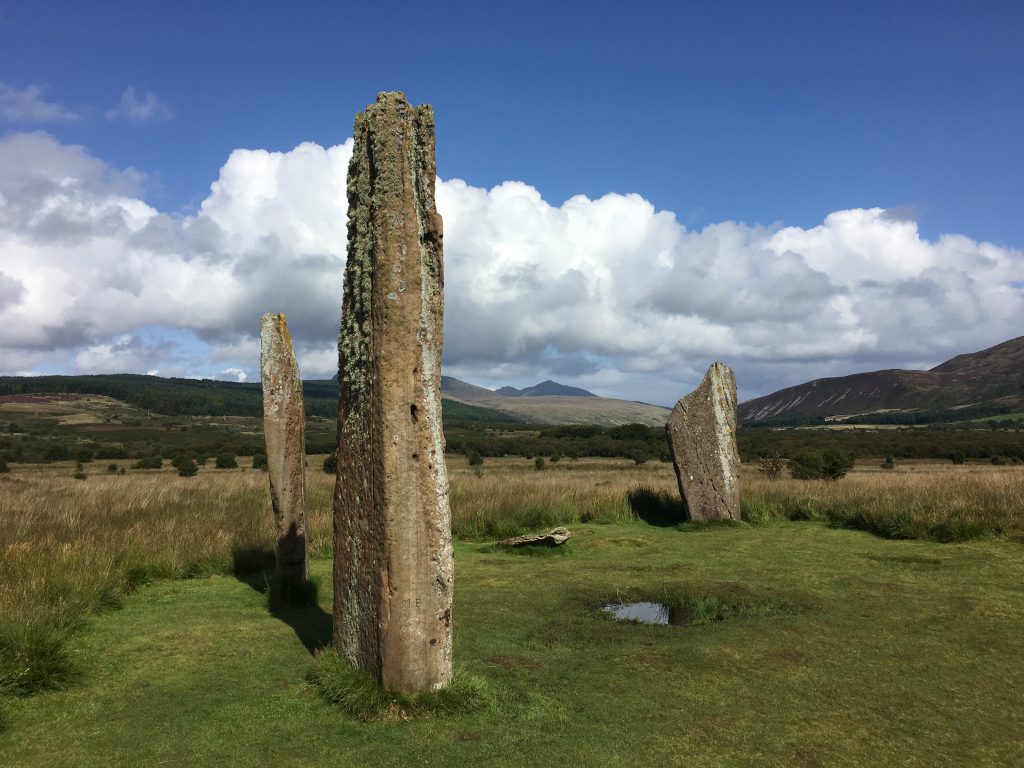 Sandstone circle, the grass covers the remains of other stones 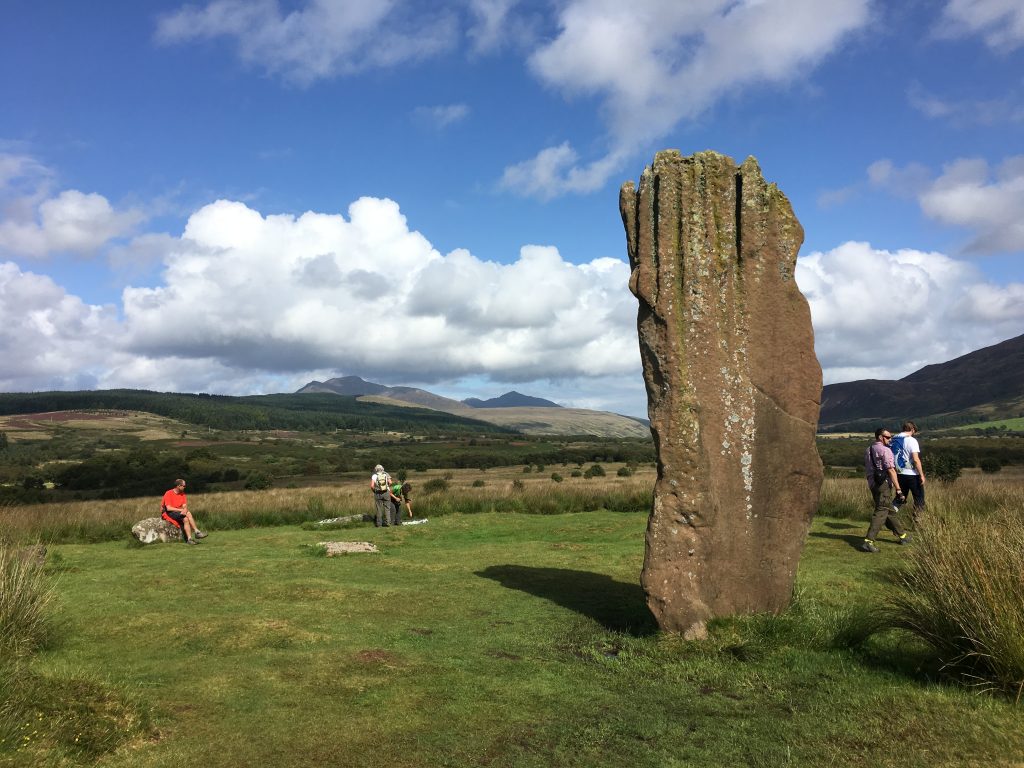 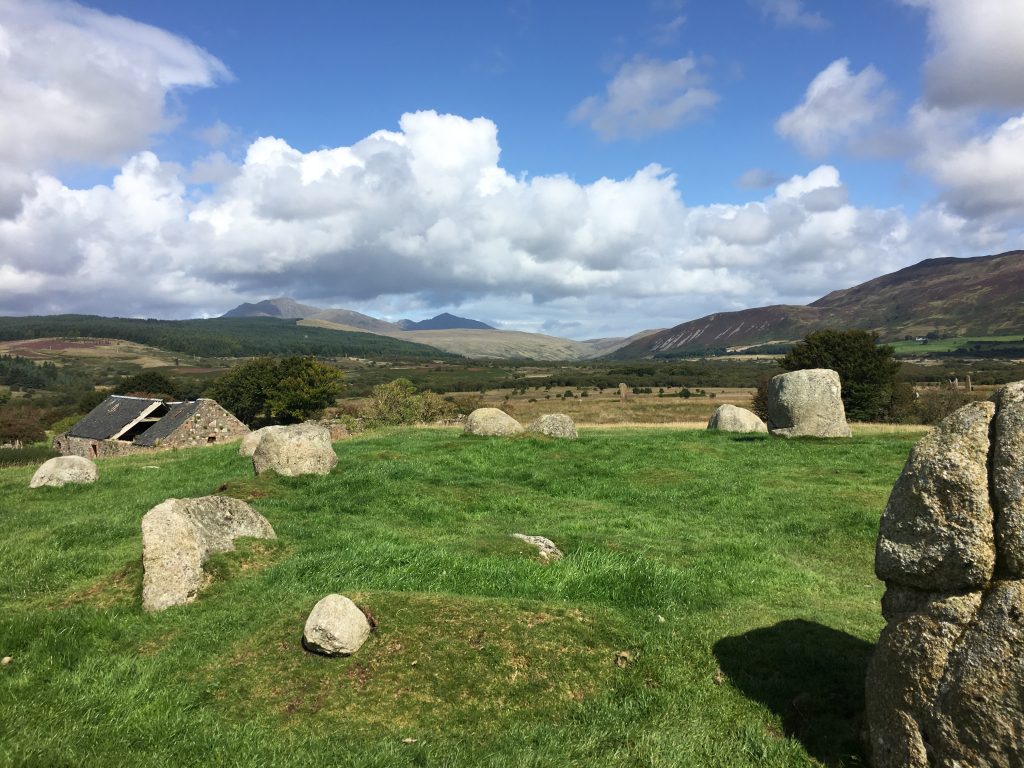 One of the granite stone circles

It had been the right decision to cycle to Machrie moor as the car park there was full and people were turning up only to have to drive away. We cycled back to Bertie and made our way further up the west coast enjoying the sea views on the way to Lochranza where we parked up by the castle for the night.