Two weeks off! The thought of an extended break has been buoying us up through lockdown and it finally felt as though it was going to happen. Vaccine roll out is going well, alternative variants don’t yet seem to be resulting in any form of panic.

Our plans are always a rough guide. Even if we’ve booked places I still like to have a Plan B. Maybe it’s the pessimist in me, but I know the way my heart sinks when things don’t go to plan and time is wasted trying to think of an alternative. Someone somewhere said that the path to true happiness is having low expectations and a backup plan is my way of managing my own expectations.

Our plans were roughly this; visit Aaron who has recently moved to the East Midlands, travel to the North York Moors to meet up with friends from Sheffield as organised by our caravanning friends. Then on to Scotland (if the weather holds) for some walking, kayaking and mountain biking.

We started off by meeting up with Aaron and girfriend at a pub stopover in Coddington. The pub itself was nothing to write home about, but it was lovely to catch up. We’d got used to seeing a lot of Aaron while he’s been back in Exeter so we’d missed his company after he moved.

The Black Bull Campsite in Pickering

Then onwards and northwards to Pickering. We’ve briefly visited the North York Moors before but hadn’t spent any extended time there. This time our friends had arranged a campsite location just south of Pickering at the Black Bull, a neatly maintained campsite with nicely hedged pitches and the eponymous pub at the entrance.

After expecting (and arranging) to be early we ended up arriving after the normal check in time. We’d had a couple of long hold ups on the way up and sat sweltering in the greenhouse that is Bertie’s cab under increasingly hot sun. Our friends were all waiting for us so that we could all wander into Pickering and explore the town.

I had heard of Pickering because of the 1940s Wartime Weekend that is held there annually, just a random bit of information I must have picked up from TV at some point, the town is a quaint, well preserved Yorkshire market town, the stone buildings, homes and shopfronts being remarkably untouched by their modern inhabitants. You can see why it makes such a good location for a 1940s re-enactment.

Getting into PIckering involved an unpleasant walk along the busy main road – we resorted to the bus for future journeys, despite being told by one of the bar staff that it was really expensive, at £3.20 return seemed more than worth it. Once in town we mooched around the shops for a while before trying to find somewhere we could sit outside and have a drink in the sunshine, everywhere was pretty busy.

During the weekend we had a carvery in the Black Bull – not my favoured meal and stupidly I hadnt checked whether the normal menu would be available alongside the carvery. We also ate at Spencers Bar and Grill across the road which had a lovely outdoor area and  large play area for our friend’s son to use.

We also had a wander around Pickering Castle. This ruined Norman castle provided a pleasant way of whiling away a couple of hours on a sunny morning. The motte and bailey structures are still very much in evidence and you can climb up onto some of the walls for good views across the vale of Piclering as well as exploring the interior of a couple of the towers. 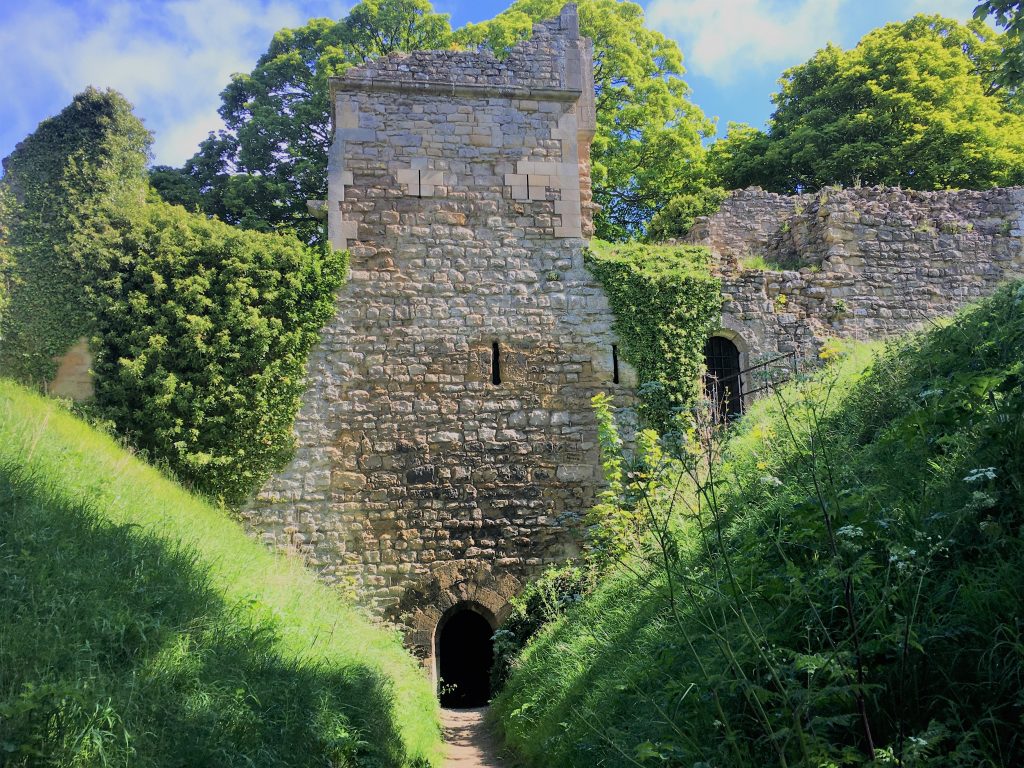 The main reason for choosing this particular location to meet up was so that we could take a trip on the North York Moors Steam Railway. This scenic railway journey crosses the North York Moors from Pickering to Whitby. We had booked up the early train from Pickering on the Saturday morning and due to Covid restrictions we were restricted to the early afternoon return service. 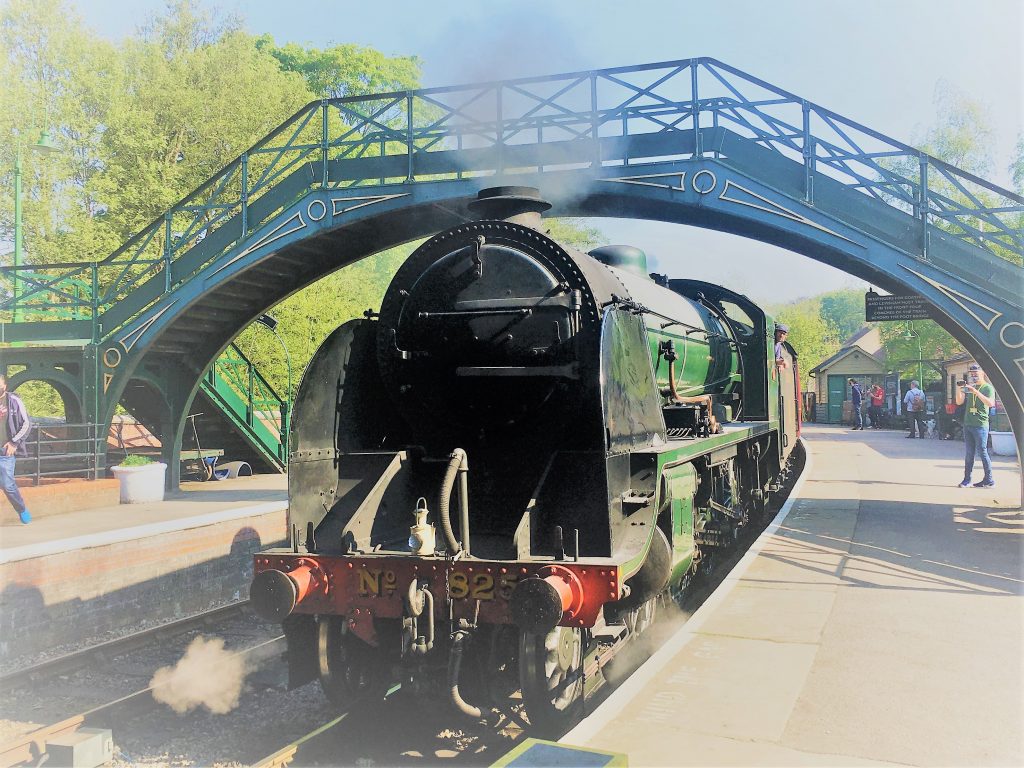 The line between Pickering and Whitby was started in 1832 as a horse drawn rail service to try to improve land based connections to the difficult-to-reach port of Whitby. Steam soon replaced horse, and Whitby started to morph into a resort town with improved access for passengers as well as freight. As with many branch lines, the Beeching report put an end to the service after WWII, but in the 60s a group of enthusiasts obtained use of the line for occasional steam galas and eventually this grew into the significant charity enterprise that keeps the tourist service running today.

The quick turn around left us with limited time in Whitby, in some ways I was glad. The bank holiday Saturday was warm and sunny and Whitby was very crowded. We got ourselves a take away fish and chip lunch from Trenchers, one of the better known fish and chip providers of the town and ate it on the harbour wall, shielding ourselves from the predation of the local herring gulls. 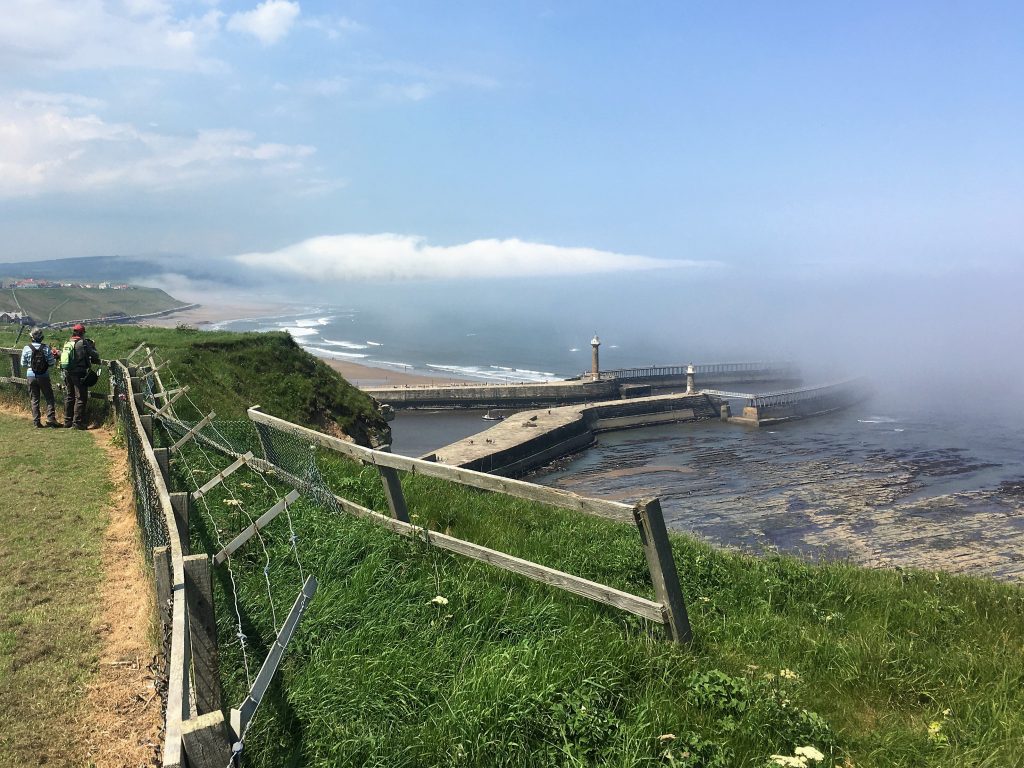 The Plier shaped harbour at Whitby with encroaching Sea Mist

After lunch we had time to quickly climb the 199 steps to Whitby Abbey and have a short walk along the clifftop, watching the famous North Sea mist lapping at the beach trying, but unable, to spoil the fun of the beach goers. I really liked the feel of Whitby, but the crowds, combined with the limited time available before our return journey, meant we couldn’t make the most of it. One day we will return. 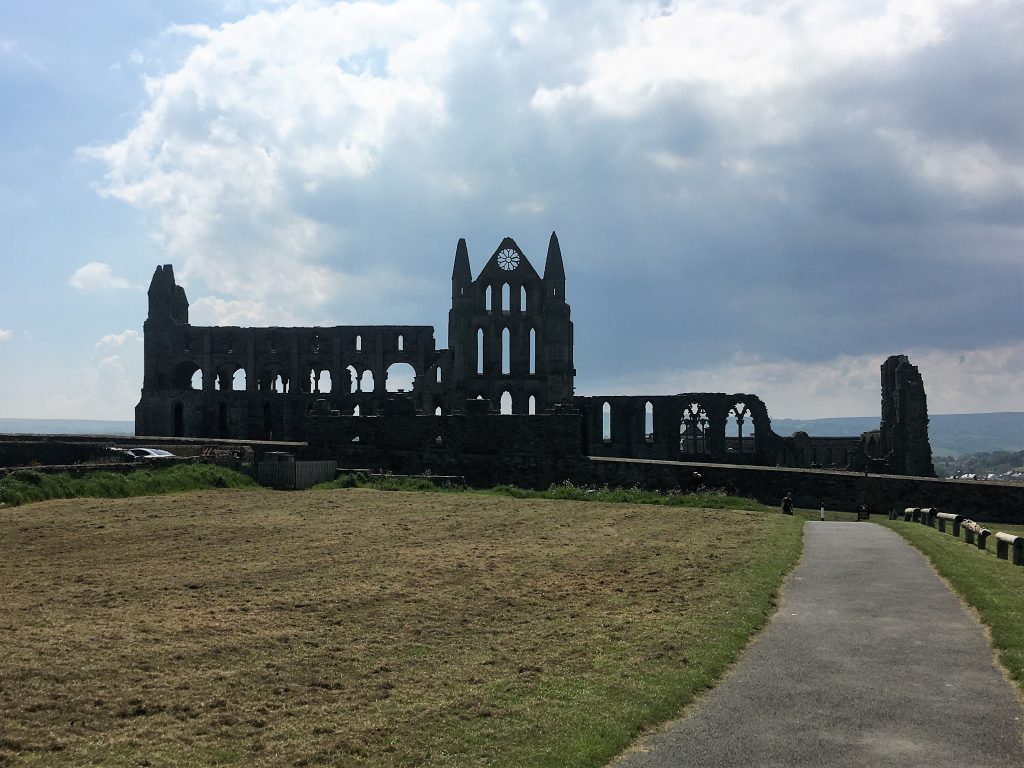 The silhouette of Whitby Abbey

Our return train was slightly late, so we were on the platform to see the hordes of people disembarking, quite a difference to the almost empty carriages of the early service. There had been some issues and a diesel engine was pulling this service. Luckily for us it was swapped for the Steam engine before the climb to the highest point at Goathland. So we got the full effect of the train chuff-chuffing it’s way up the incline and the accompanying flecks of soot that made their way into the compartment. 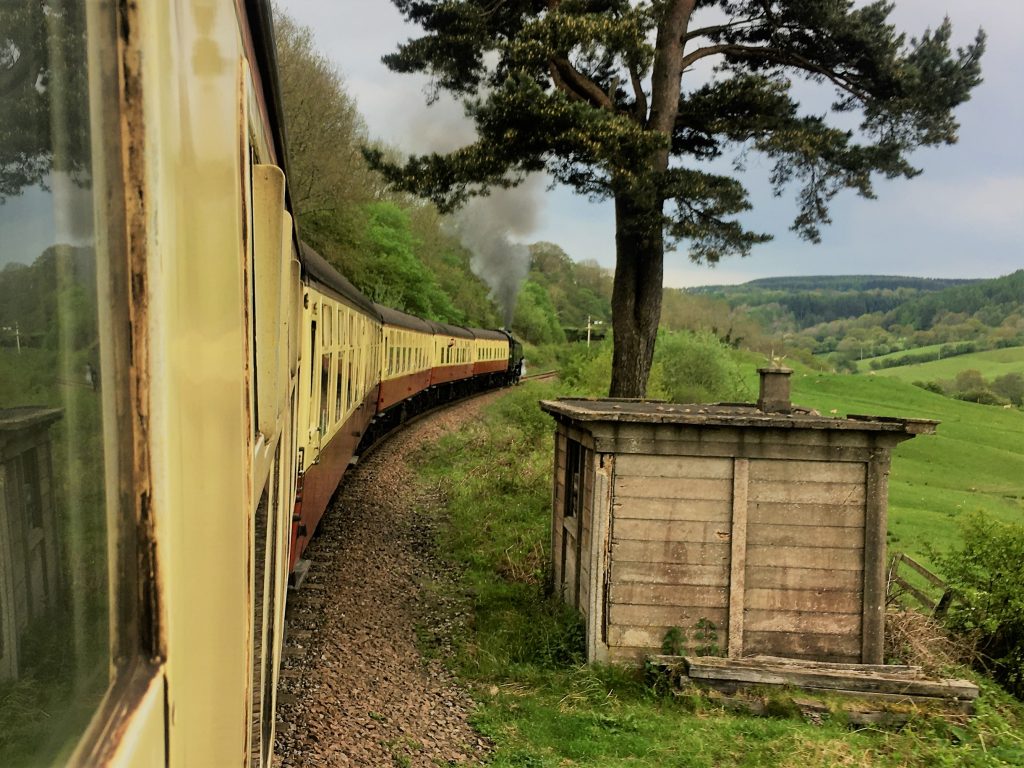 The curve of the Train through the North York Moors

Along the way we saw deer and rabbits on the moors, long horn cattle and sheep grazing and beautiful vistas. At Grosmont filming was taking place. We tried to find out which film it was – Mission Impossible and Game of Thrones seemed like unlikely options to have a a steam train scene, and we have since found out that it was the new Indiana Jones film, so we’ll be looking out for that.

We hadn’t intended to go Mountain Biking, our plans had been to get the bus onto the North York Moors and then walk back to Pickering, hopefully seeing the Steam Railway in the process, but we waited for over an hour for the bus. The online app showed only microscopic movement and we decided that we should cut our losses and try a plan B.

We’d had plenty of time to work out what Plan B might be and we’d spotted an opportunity for some mountain biking. So we walked back to the campsite and changed into our cycling togs.

Dalby Forest is to the east of Pickering and is a Forestry England location with miles of walking, cycling and mountain biking trails as well as a scenic toll road, multiple car parks and picnic spots.

There was an easy route from the campsite, across the road to Upper Carr Lane (crossing the busy road was the hardest part of the enterprise) and following the road as it became a track until it turned left onto Westends Lane. This was flat but bumpy farm track that led all the way to Thornton-Le-Dale which is another incredibly picturesque Yorkshire village and was gridlocked with cars. As the bus service goes through here we were glad we hadn’t waited for it. We wove in and out of the traffic on our bikes and continued uphill to the road and then track through the pretty Ellerburn valley (there was a beautifully situated campsite here which we have earmarked for a future visit). 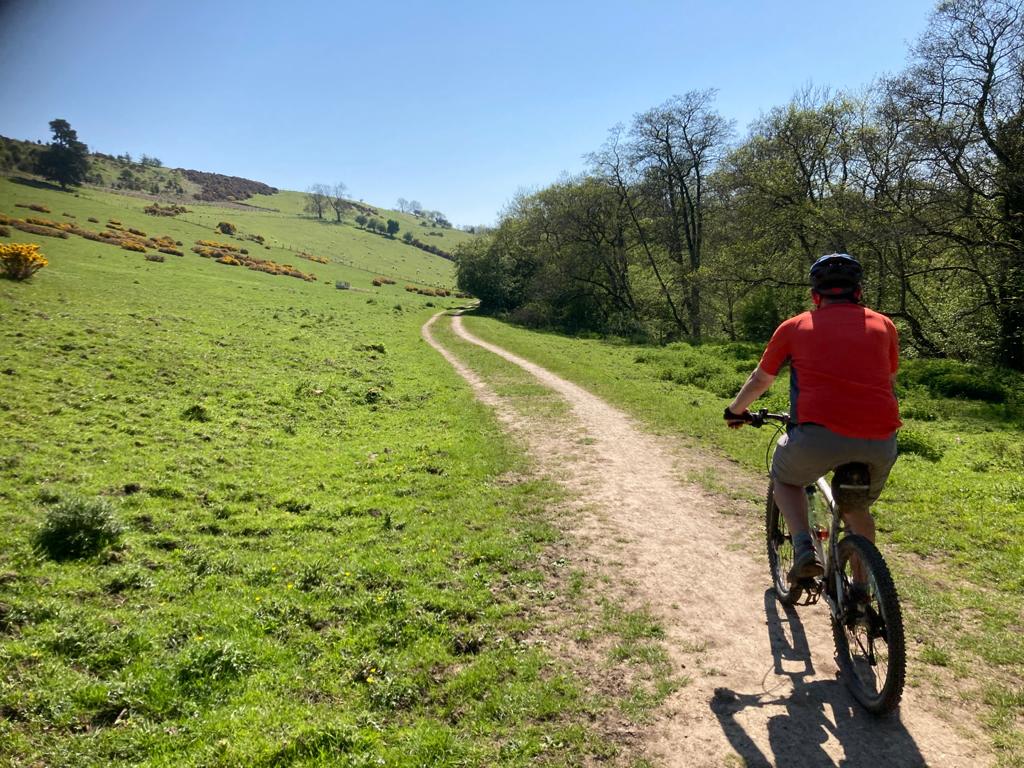 THe easy part of the Trail – A meander through Ellerburn valley

Here we were able to enter the forest area and make our way to the visitor centre where we could see the trail map. We followed the red Newclose Rigg trail from here and then a combination of red and green routes around the outside of the forest to take us back to the point where we had originally entered. The red trails were fun single track and there was a lot of up and down along the way. The Green trails and family cycling was mostly on forestry tracks which gave us a bit of respite when we needed it.

This had been one Plan B that had left both of us satisfied.