When we went into lockdown in January we immediately started thinking about what we would do when lockdown lifted. Some people may take the opposite approach and decide that there is no point planning until more is known, but for us planning and preparation is part of the pleasure and so plans were made.

With some optimism we booked up the Easter weekend at Watergate Bay Campsite, near to Newquay, with our caravanning friends. Newquay wasn’t a draw for us but the beautiful coast path was. As Easter approached and it became evident that we weren’t going to be released from lockdown we contacted the campsite and moved our booking to the first May bank holiday.

Because Paul has the option of taking unpaid leave at work we have started to make the most of our breaks by Paul driving while I sit in the back at the table and work. So we pick a time to leave when I have minimal meetings and head off. This means that Paul is at the mercy of the sat nav which took him the scenic route; to the coast road in Newquay before going north along the coast to Watergate Bay. It was not a dreadful route but had a few more pinch points than the route we took home past the Airport.

We arrived at the campsite in time for me to be able to dial into some meetings and finish off my working day while Paul set up (not a big job) and then lounged around until Jen and Mark returned. They had arrived the day before and their caravan set up was to provide the social hub for the weekend with it’s large awning. Paul and Mark constructed a windbreak enclosure that gave their pup Tilly a clear boundary and helped to shield us from the rather persistent cold wind. 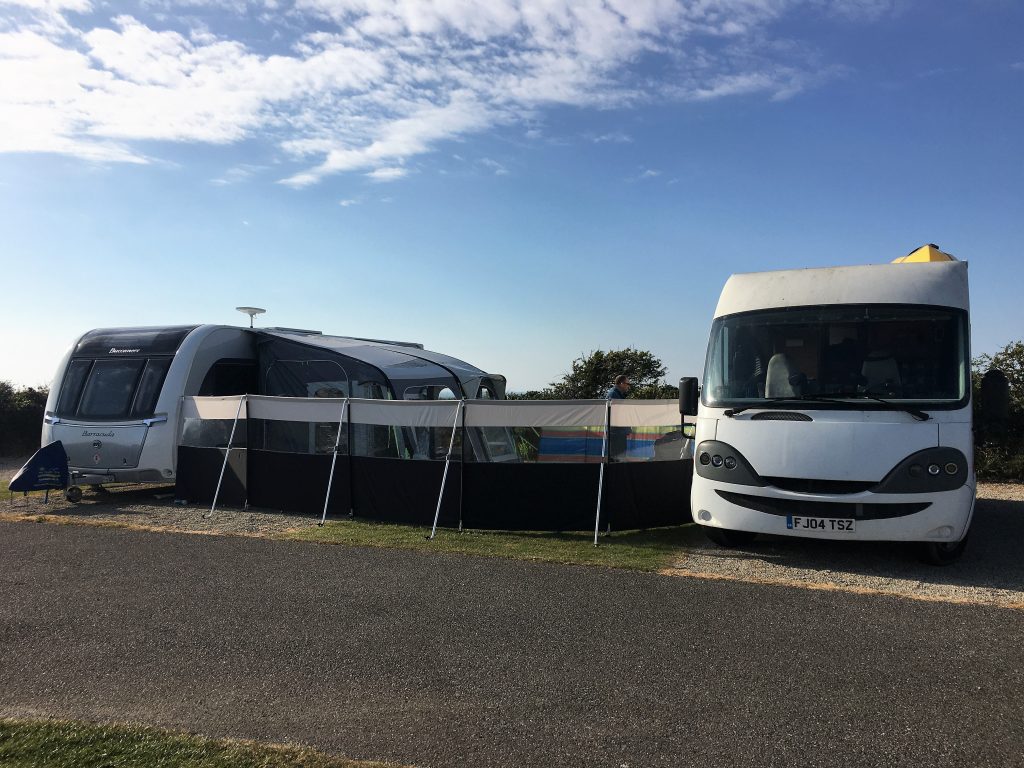 We’d booked a hard standing pitch on the basis that we’d be taking a bit of a chance with a grass pitch at this time of year, but the dry cold weather had left the ground as hard as bone. The campsite was very quiet. Mostly people with seasonal pitches and just a handful of tourers. It didn’t really get any more busy despite it being the bank holiday. Maybe the weather had put people off.

A walk into Newquay

Newquay is a reasonable leg stretch from the campsite. On the way there we decided to walk in the wrong way (deliberately) across fields to the village of Trevarrian before joining the coast path and  heading to Newquay. We stopped at Watermouth Cove for a quick drink before continuing into Newquay to have lunch and a quick mooch around the shops. Everything felt very quiet and only just starting to gear up for tourism with many shops still closed. The town still leaves me a bit cold but it was a shame to see it so quiet. 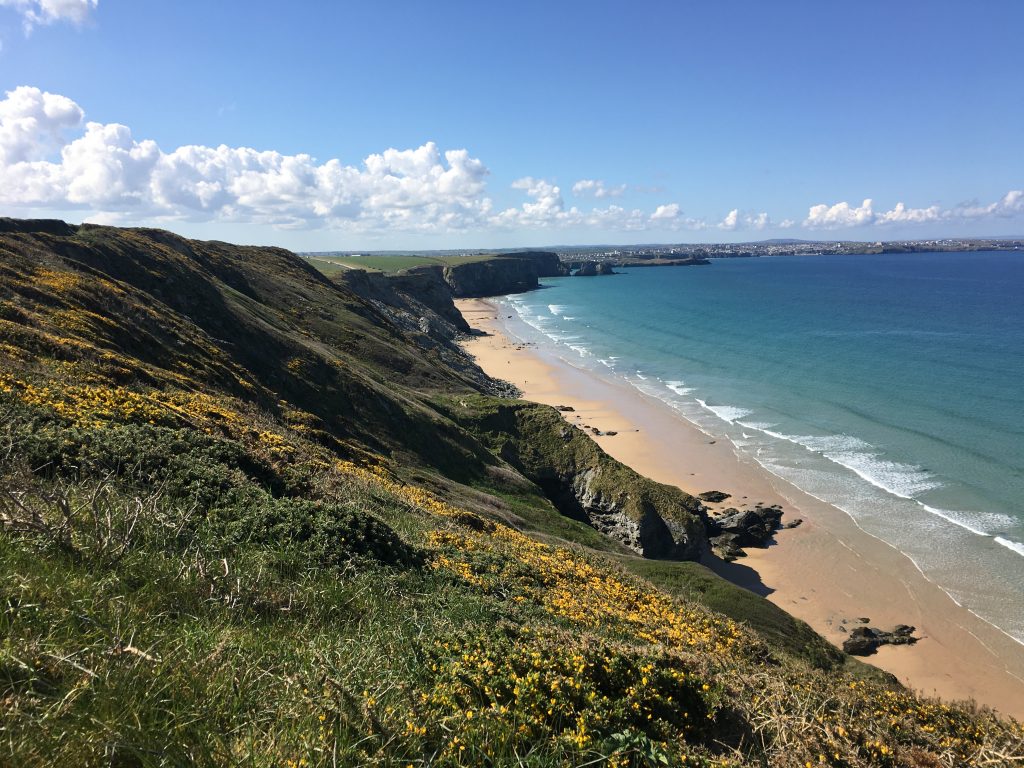 The Sands of Watergate Bay

On the way back we stopped at Porth Beach for another drink before making our way back to the campsite – a more direct route this time through ‘The View’ campsite which kindly allows people to walk through. It had been a leisurely walk with a lot of stops but it was still a good 20k.

The following day we decided to walk a stretch of the coastline to the north of the campsite. The Number 56 bus from Newquay to Padstow passes by the campsite entrance and visits many of the coastal resorts, villages and beaches along the route. It was the perfect opportunity to do a linear walk so we hopped on the bus and took it as far as the beautiful sandy Harlyn Bay.

The bus driver earned his wages and possibly danger money as well, the route is not an easy one with a lot of traditional Cornish narrow lanes on the route. We had to reverse a couple of times to let other large vehicles through and the bus at one point drives into Constantine Bay before doing a three point turn back out again. I had wondered why it wasn’t a very frequent service but could understand why after spending an hour marvelling at the skill of the driver. It puts driving a motorhome into perspective.

Harlyn Bay is a wide stretch of Cornish surf beach and the coast path south traverses the beach to avoid a private property before making it’s way up onto the coast path. Note to self – dont attempt this on a particularly high tide.

The stretch of coast south of here is sublime The mounds of pink thrift and yellow/orange kidney vetch patchwork the green of the grass. The blue sky reflected off the water and contrasted with the reflective white sands and grey rock. It wasn’t a warm day and the wind was chill, but it was perfect walking weather. 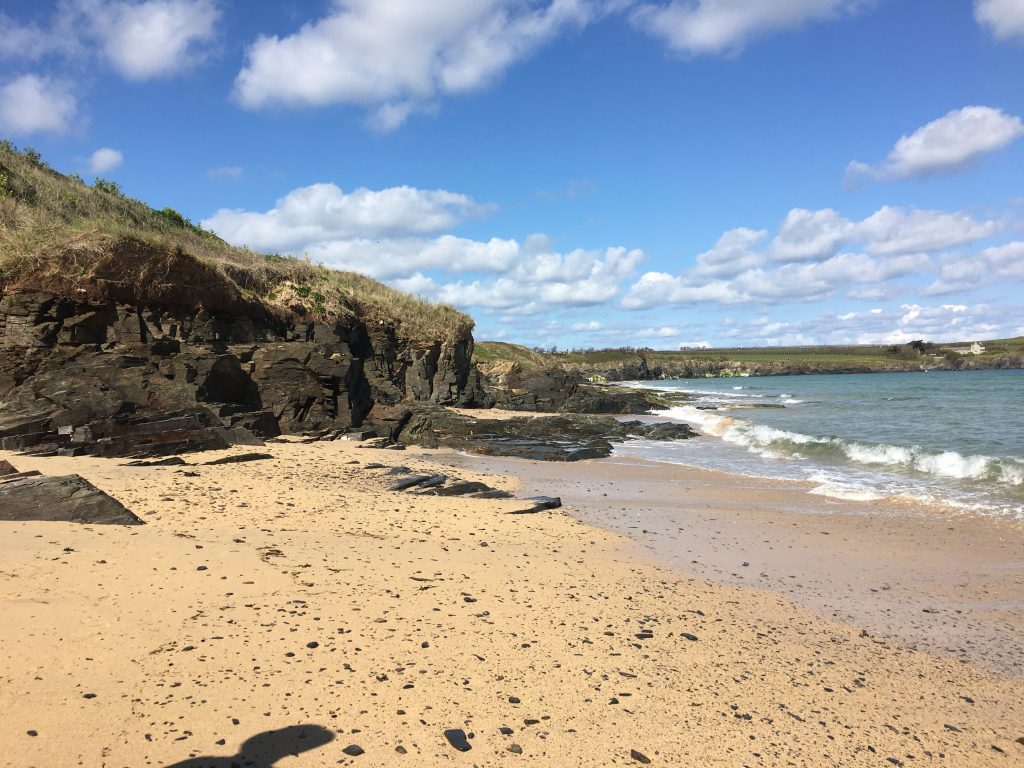 Starting Our Walk at Harlyn Bay

We wandered past Mother Ivey’s bay, supposedly named for a local white witch, and past Rick Stein’s childhood holiday home (you might have seen it on his Cornwall TV series, one of our favourite lockdown programmes). As we walked the bay towards Trevose Head we had constant views of the spectacularly located Padstow lifeboat station with it’s long ramp down to the sea. 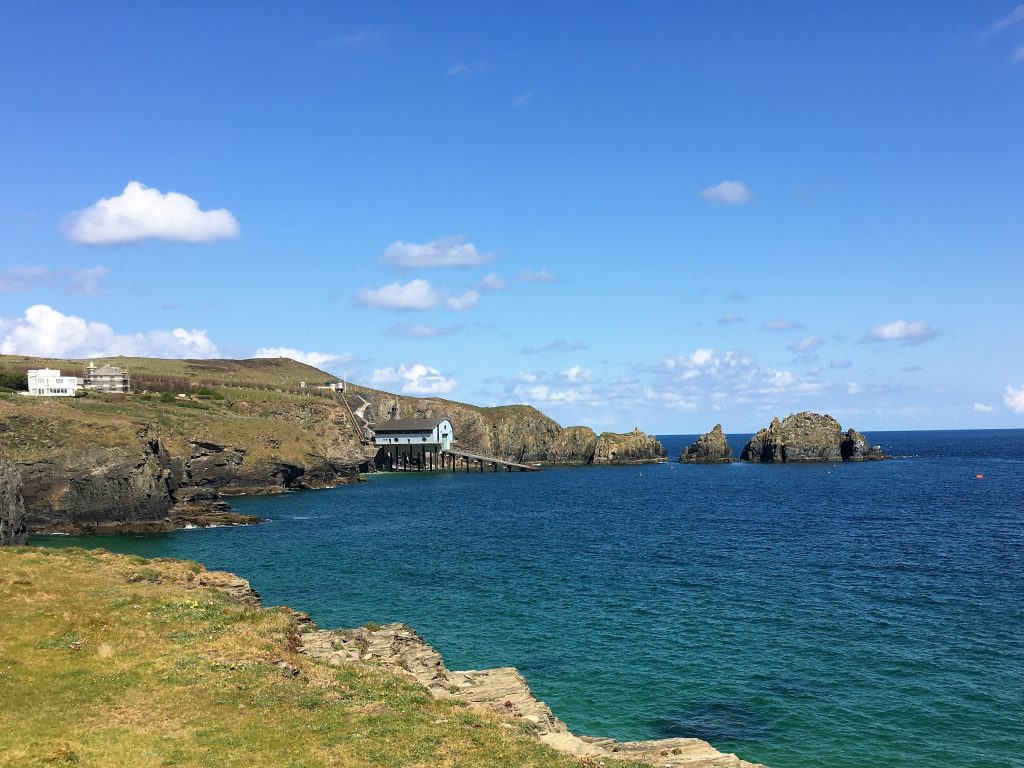 On the north west corner of Trevose Head is the lighthouse, followed by the mandelbrot-like smaller headland of Dinas Head – presumably named for the small Tumulus on it’s summit and hearkening back to the Celtic heritage of Cornwall. The headland is peppered with sea caves, the most spectacular being ‘Big Hole’ a fascinating 80ft deep collapsed sea cave where you can hear the sea washing in and out. 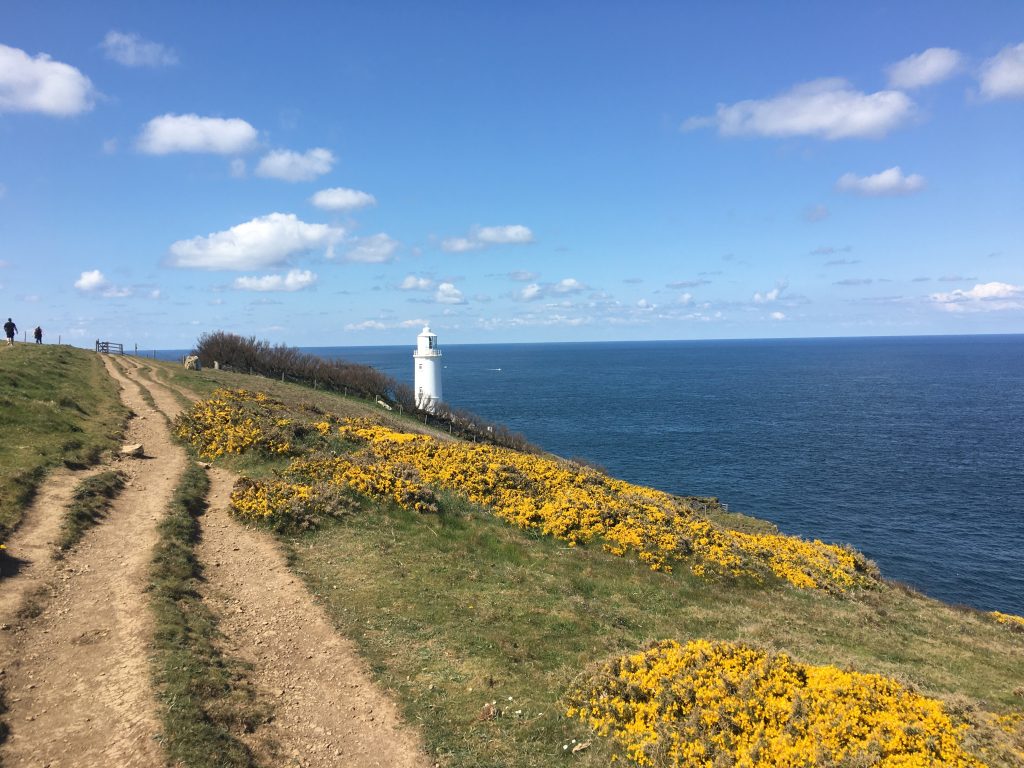 The Lighthouse at Trevose Head

Further south Booby’s Bay and Constantine Bay are contrasting stretches of coast, the rockpools of Booby’s Bay followed by the soft sand of Constantine. We stopped here for an ice cream and watched the beach fill up with tourists enjoying the sun from behind their windbreaks. 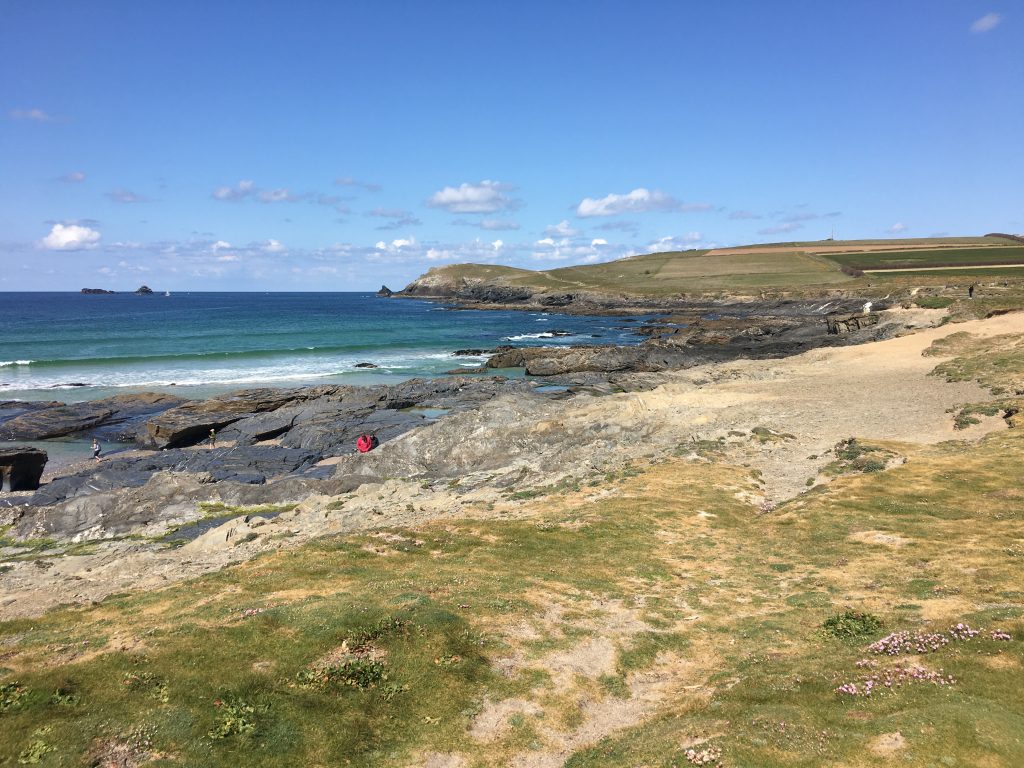 The coast then became higher and more rugged with deep coves and the occasional fishing village, the cliffs getting higher as we approached first Pentire Steps and then Bedruthan Steps. At Pentire Steps we stopped to watch the few beach goers scrambling down the steep slope , tentatively finding a way to descend the last few meters to the beach. At Bedruthan Steps the route to the beach is currently closed but there were plenty of people following the well made path around the top of the cliffs from the nearby carpark, its easy to see why as the views of the sea stacks are spectacular. 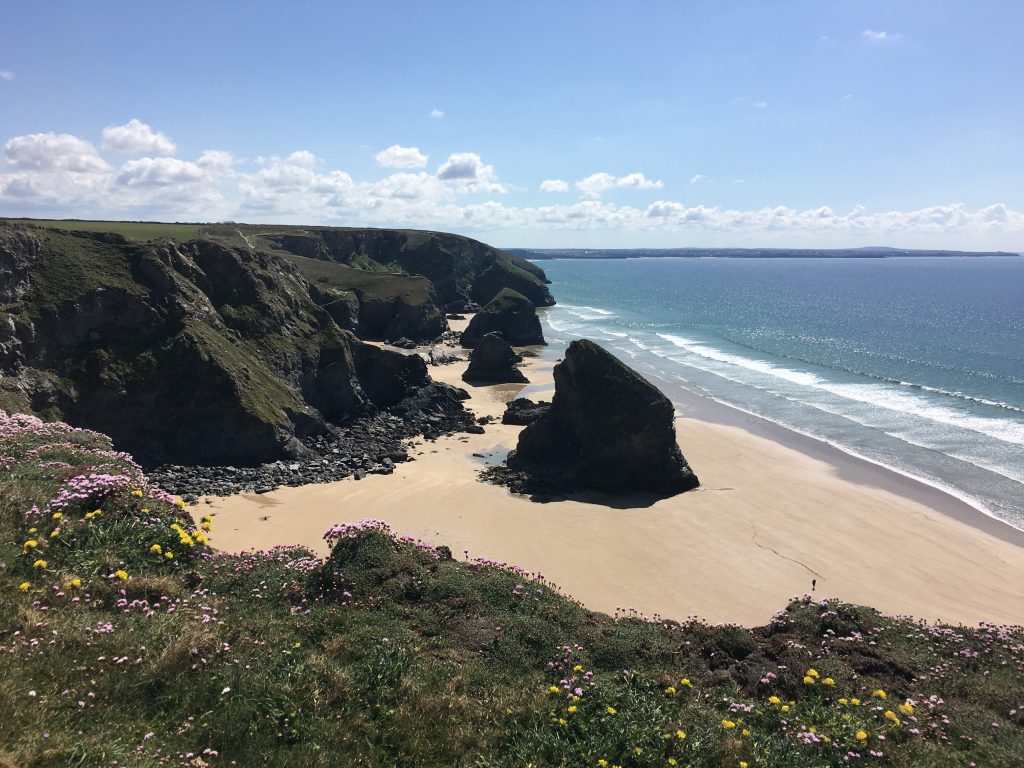 The final stretch of coast was equally beautiful. We dropped into the bay of Mawgan Porth hoping to find a pub to enjoy a drink before the final couple of km back to the campsite, but there was a long queue outside and we decided just to head on home to our own stash of cider and wine.

A Stroll to St Mawgan

St Mawgan is a pretty little village inland from Mawgan Porth, we took ourselves along the main road outside the campsite for a few hundred meters before following a footpath north and then east across fields. The path got more pleasant as we dropped into a small wooded valley and followed a track up to St Mawgan.

We had a little meander around the village to look at the outside of Lanherne House – now a Carmelite Convent – the church and the pretty houses. There is a Japanese garden here but was only allowing people in with prior bookings, so we took the riverside path down to the coast before heading back up to the campsite. 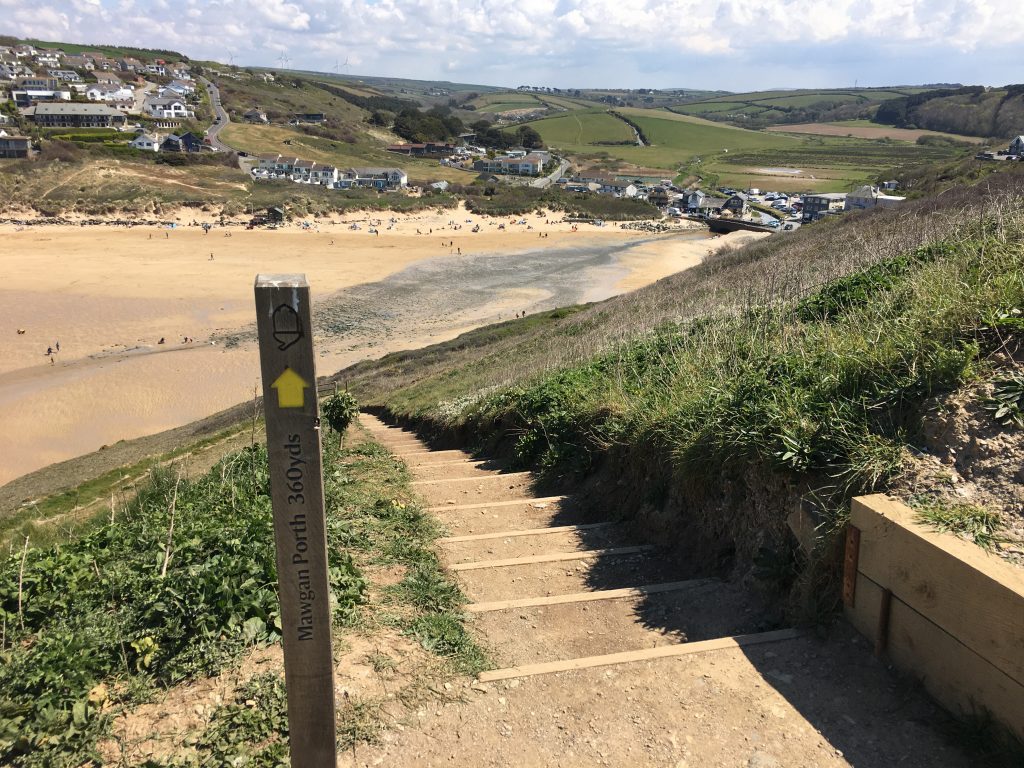 On the Sunday evening we could see the sky changing. The winds, always quite brisk, had started to pick up and the clouds were building, By Monday morning the winds were howling and we decided we’d just have a short stroll to the cliff top to watch the waves whip up into a foamy mess. We spent most of the afternoon lazing inside Bertie although at one point we had to dive outside to rescue our neighbour’s toilet tent which had slowly started to dismantle itself.