A family catch up

Our first trip away in Bertie this year was a scant 15 miles from home. Oakdown Holiday Park is a campsite where Mum and Dad keep their  caravan. It’s just off the A3052 that takes you from Devon to Dorset through some beautiful countryside and puts it within easy reach of some beautiful Jurassic Coast locations. It’s a pleasant and flat campsite with a couple of good play parks for the kids and lovely little cafe that is well used by locals as well as campers. There’s a pitch and put golf course as well and it’s right next door to the Donkey Sanctuary. 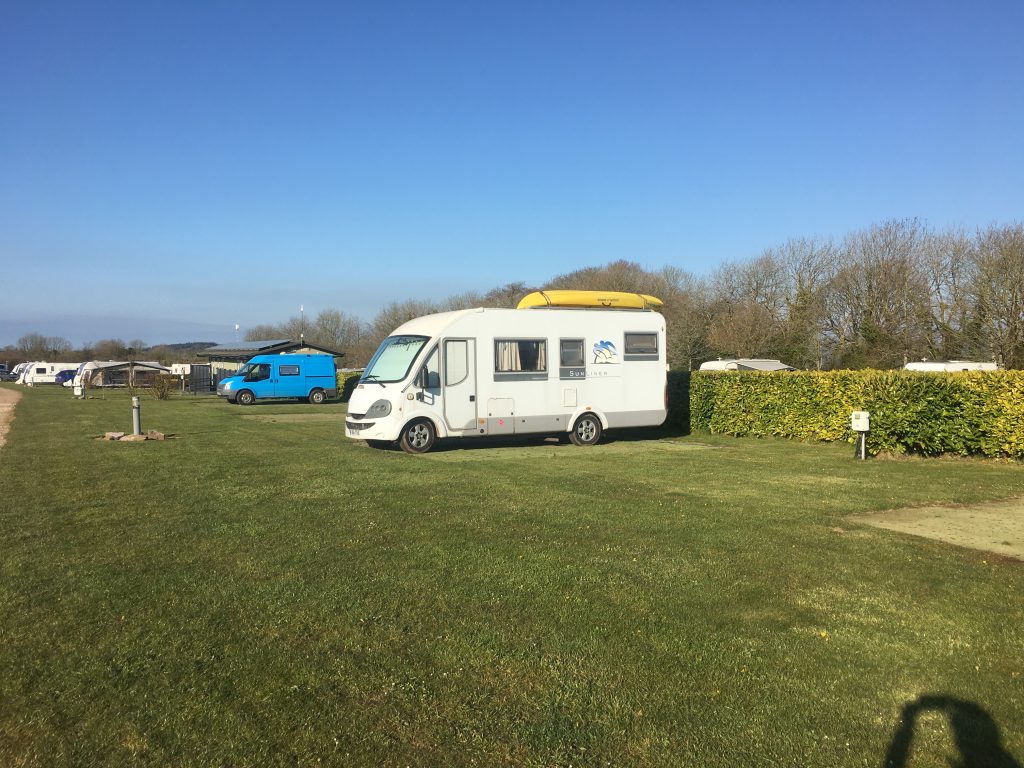 My sister was borrowing the caravan for an Easter holiday break with my niece and nephew, and as we hadn’t seen each other through the winter lockdown it was an opportune moment to get some time together and give Bertie a shake down. 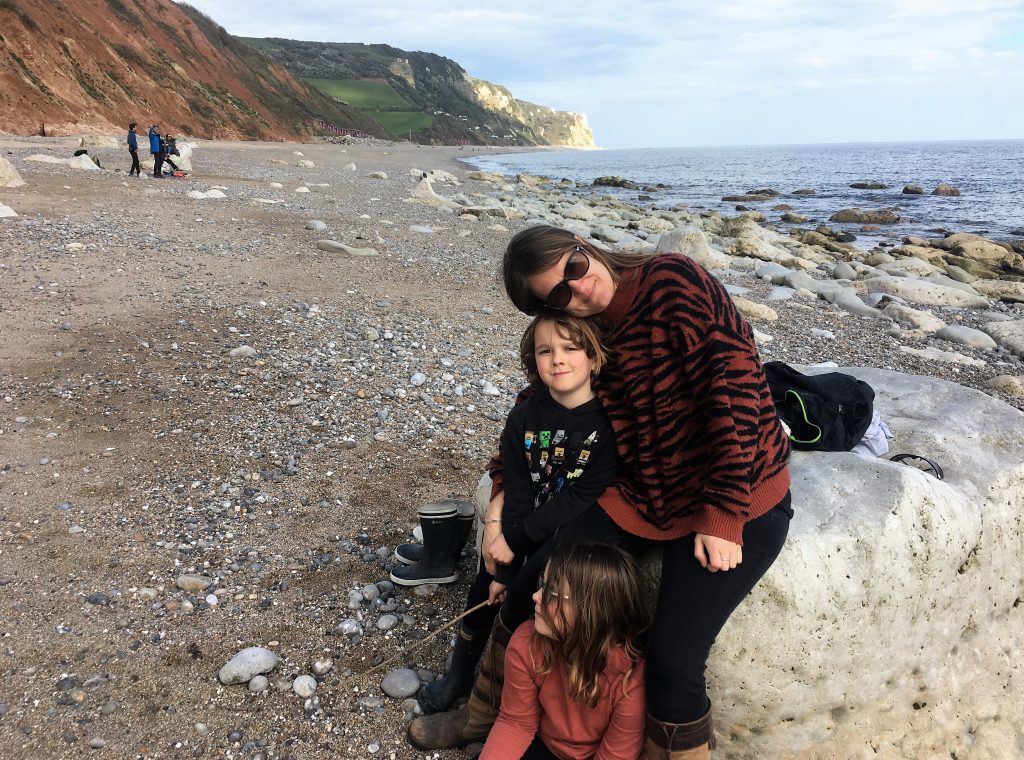 Enjoying the beach at Branscombe after an afternoon rockpooling

Practically it was a bit of an odd one. Paul was working in a local school and had to get the work done before the school holidays finished, so he dropped me and Bertie to the campsite on the Thursday afternoon and then was off trying to complete all of his work on a long Friday. As a result I spent the first two nights in Bertie on my own. A very strange experience!

I spent a wonderful couple of days with the family, enjoying a visit from my other sister and her family and then from Mum and Dad when they came down to supervise the tidy up of the caravan. The local beaches with their steep pebbly shores backed by red mudstone and chalk cliffs may not be everyone’s idea of a perfect beach holiday but they have been our family go-to destination for years.

Getting to the campsite was really easy, but I wouldn’t want to drive too far into Branscombe with a motorhome. Branscombe is a long village spread along the ‘Street’ of the combe and culminating in a knot of buildings around the Mason’s Arms. There is a local bus that runs along Street and then turns off towards Beer, so it would be possible, but the roads are narrow and the stone walls unforgiving. We spied two motorhomes heading along the road to the beach, but there is a height barrier and I’m not sure whether the landowner will raise it for high vehicles.

A Historic walk around Branscombe

When the family had departed we enjoyed a long walk around Branscombe, starting with the walk from the campsite down Weston Combe to the coast path. We always walk the coast path here so the idea was to enjoy a mile or two on the coast but then to head inland to try a few inland paths and tracks we haven’t tried before.  The weather was bright and sunny and plenty of other people were out enjoying a perfect Sunday. The coastpath along here is occasionally exposed but also runs through woods where the trees were starting to come into leaf. Bright yellow stars of celandines, the pungent aroma of wild garlic and an occasional bluebell gave the whole walk a decidedly springtime feel. If you look down from the top of the cliff you can see the slumping undercliff dotted with occasional homes and holiday chalets. 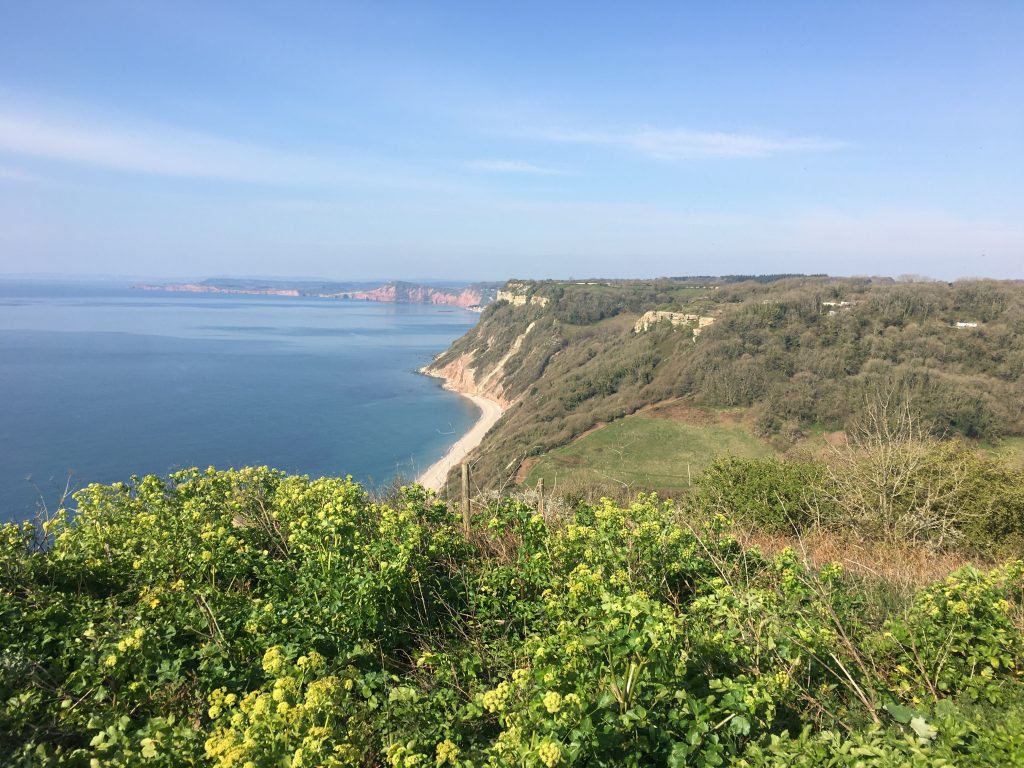 Looking back along the cast path towards Ladram Bay

This stretch of coast path goes past  Berry Camp hill fort, the remains of which are fairly indistinct but give a flavour of the history of the area. Three walls are visible, mostly under hedging, but the fourth wall has been lost to the sea. 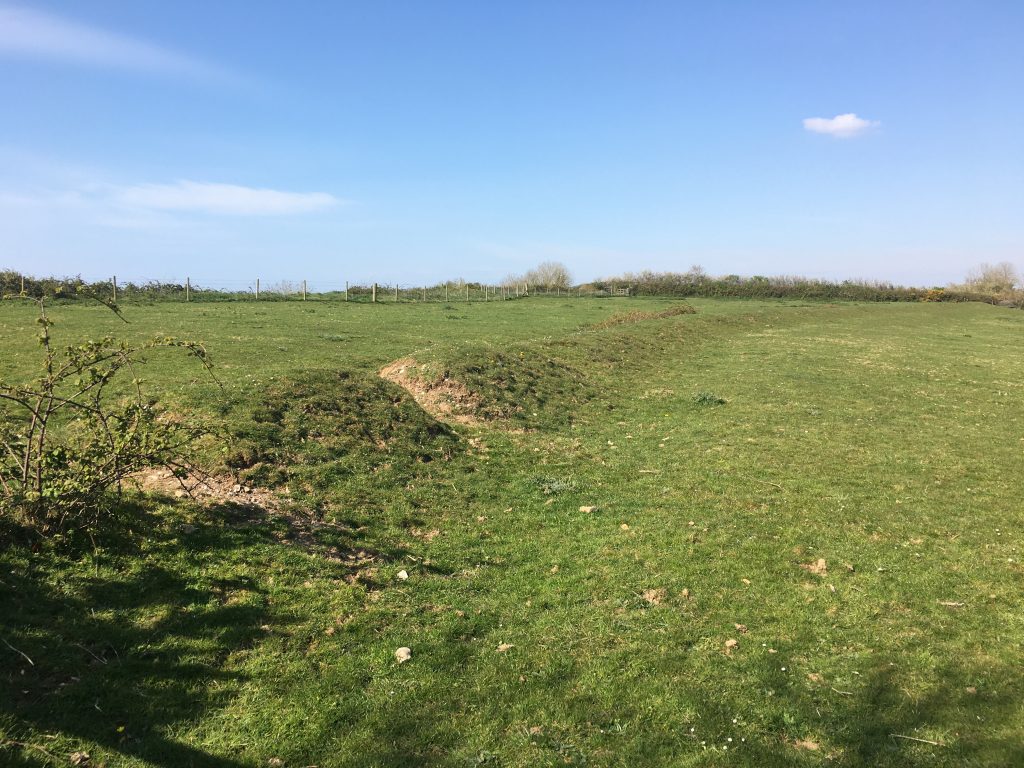 The only clear remaining wall of Berry Camp fort

We reached Branscombe beach where we stopped for a quick breakfast break before heading inland, cutting uphill to cross the beach road and walk along an old road that is now being reclaimed by vegetation. We were circling Branscombe, walking past the lumpy grassed over remains of old quarries; maybe used to dig out the sandstone that has been used to build the local farmhouses, or chalk for lime kilns, or possibly even prehistoric quarries used to find the abundant flint in the area. 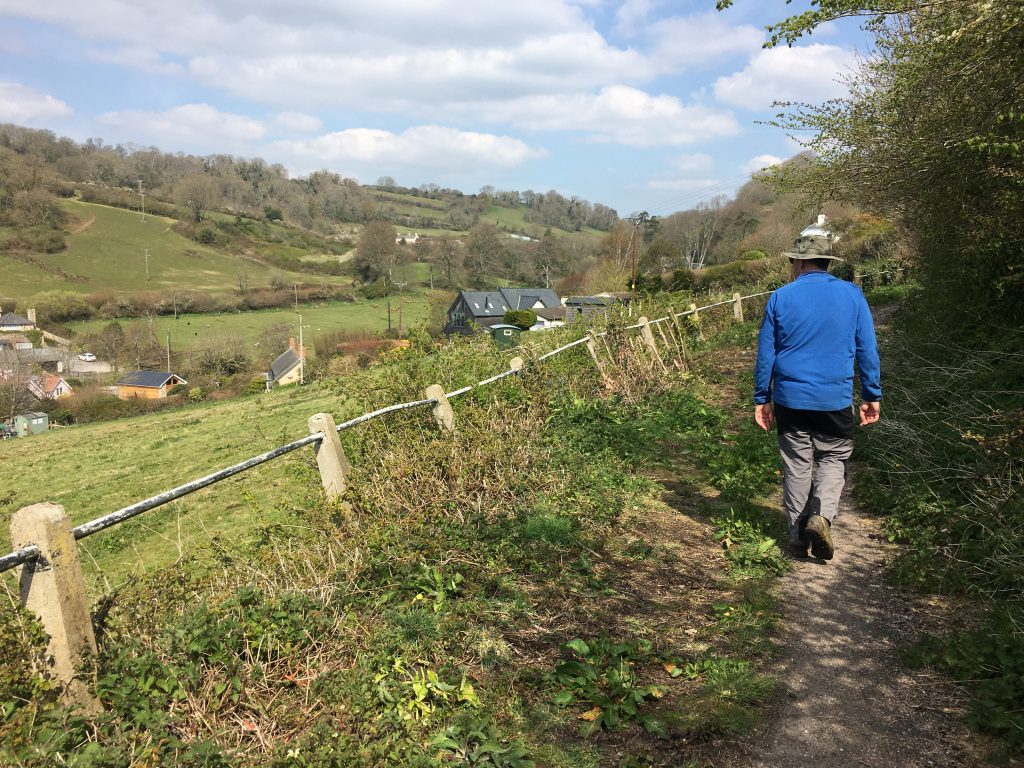 This road is now closed to traffic

The route took us through Gay’s Farm where Devon Red cattle were grazing and an anxious farmer was looking for a missing cow who was about to calf. From here we then dropped down into the next valley and then up to gain a glimpse of Hole House and then up past Edge Barton Manor House, both of which have a long  history. The area feels barely changed by the passing of time; farm land, cottages and manor houses are only occasionally interspersed with more modern development.