It has been seven months since we last saw our son Aaron, when he came out to visit us in Spain just before Christmas. Since then he has got engaged to his girlfriend Katie and they have both been living at RAF Boulmer in Northumberland. Paul and I are both rather excited to be going up for a visit, it’s a stunning part of the country, but one that we only skirted while we were on the UK part of our travels last year.

It’s a long old drive from Devon to the North East, especially in a machine as sedate as Bertie, so we gave ourselves permission to stop en-route. We ended up stopping on the edge of the North York Moors in the town of Helmsley, it’s one of those rare examples of a town that has designated motorhome parking, albeit with no facilities. We divert off of the A1 and follow the A170 eastwards, wondering if we should follow the diversion for caravans and HGVs. By the time we made a decision we were already climbing the steep switchback of Sutton Bank, at one point a 25% climb. Bertie made it, but was close to pushing the car in front up the hill as we tried to maintain momentum. Paul was not happy with the car in front who decided to take the hill in 1st gear at about 5mph, there was a lot of muttering coming from the driver’s seat. If we had stopped there is little chance we would have managed to start again, except by rolling backwards down the hill. We made a note to take the diversion if we came this way in future.

Helmsley in an attractive Yorkshire market town with a ruined castle and market square and many stone buildings glowing a warm gold in the glorious sunshine. We stretch our legs with a walk around the town and surrounding footpaths. It has the sort of shopping that is great for passing the time, more tourist oriented than practical, but we do manage to pick up some bits for our tea in the local co-op. Our night passed incredibly peacefully in the car park and we wake feeling more refreshed than we have for some time. 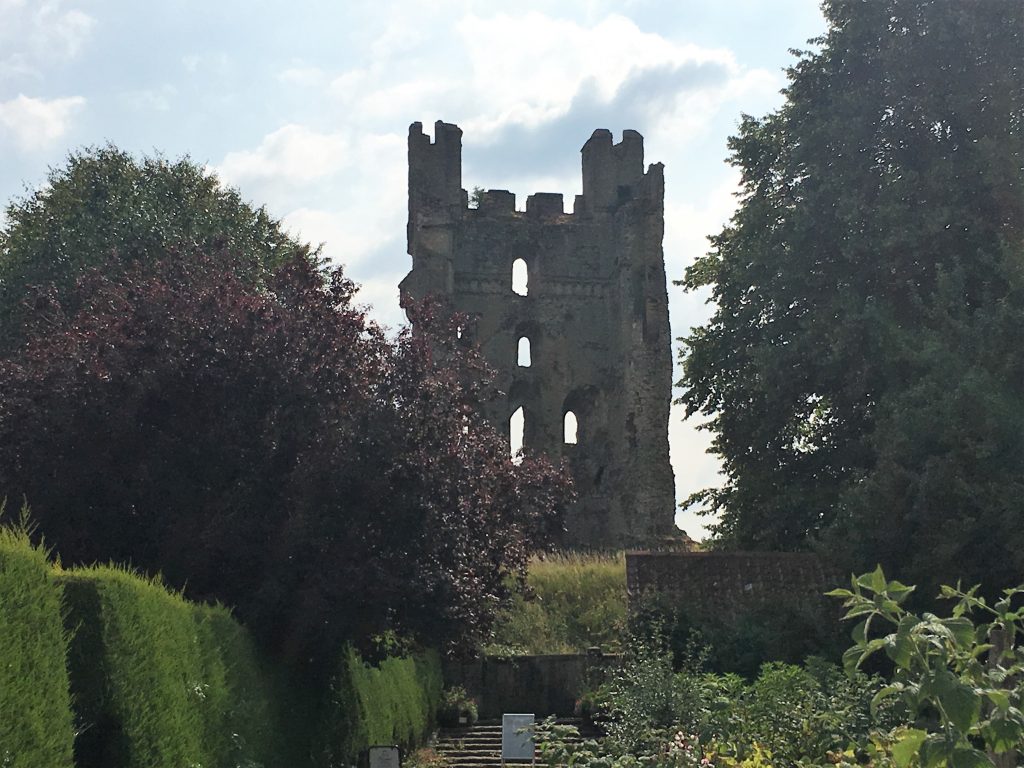 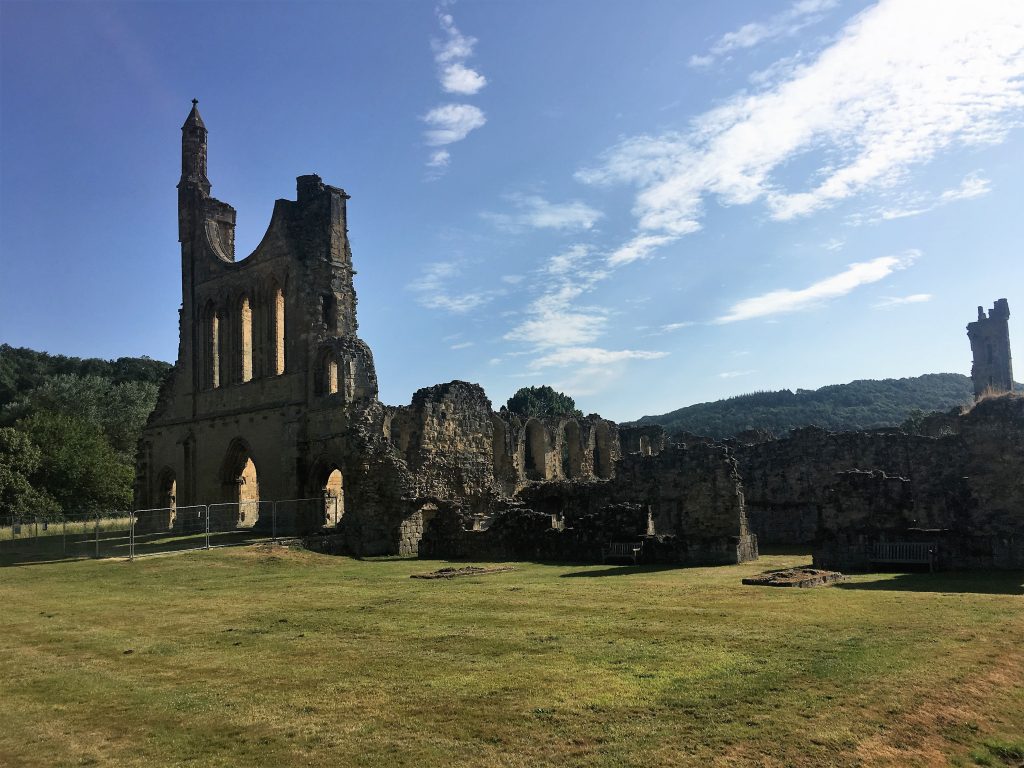 We pass by Byland Abbey on the way north from Helmsley

The following morning we stopped for fuel and shopping before moving onto Beadnell Bay where we had our initial three nights booked in at the Caravan and Camping Club site. It’s a busy site with a long queue of caravans and motorhomes waiting for the 1pm opening time. We booked our first few nights here because of a slight, and unfounded, nervousness about getting a space on the nearby Temporary Holiday Site (THS). It is a pretty bog standard campsite which has the benefit of a good position just across the road from a long dune-backed beach and a short distance away from Beadnell to the south and Seahouses to the north. There is also a food stand which does reasonably priced breakfasts and fish and chip suppers, we didn’t manage to sample any ourselves but looked with yearning at the huge and crispy portions of battered fish.

However we don’t go hungry as Aaron and Katie both love to eat. Being young and fit they can afford to and we spend the next few days feeling permanently stuffed as we tried to keep up with them. We wore off some of the calories with walks to see the countryside and coast that Northumberland have to offer. We visit Beadnell and Seahouses, where the number of fish and chip restaurants beggars belief and where we see dolphins frolicking just outside the harbour. We walk around the island of Lindesfarne with the eerie keening of the seal colony a constant background noise, and we venture into Alnwick (which I have to constantly remind myself is pronounced Annick) to see a small parade, part of the RAF 100 celebrations. After our trip to Alnwick, Aaron and Katie give us a lesson in Sushi making and we get carried away making maki rolls of various flavours. 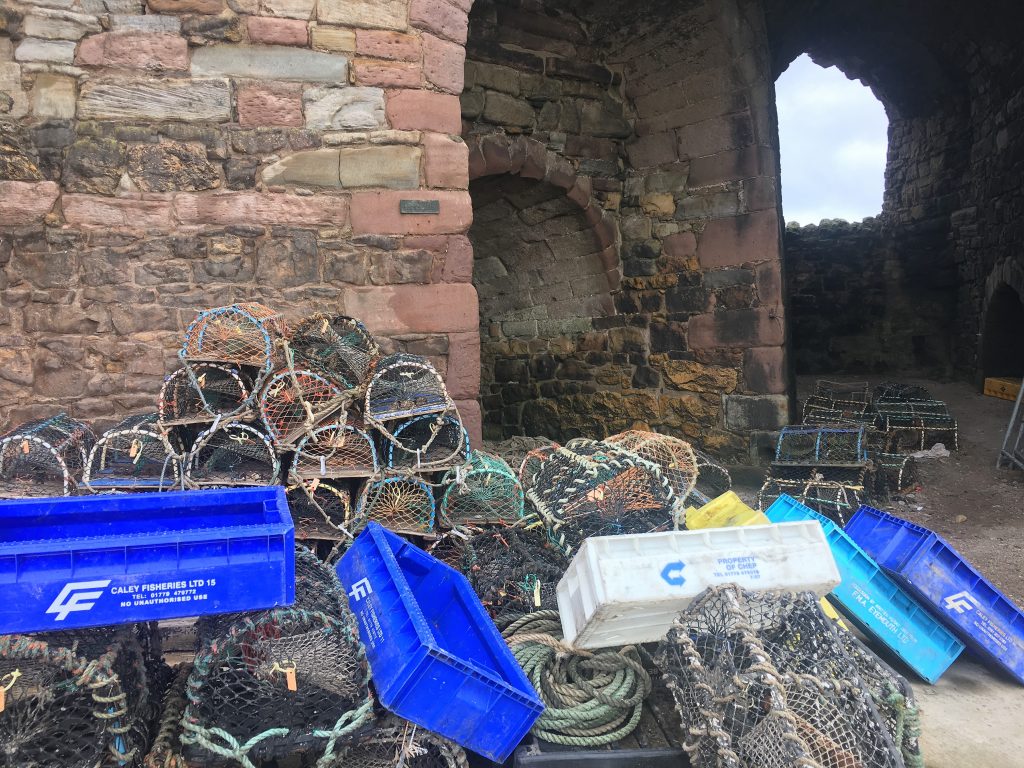 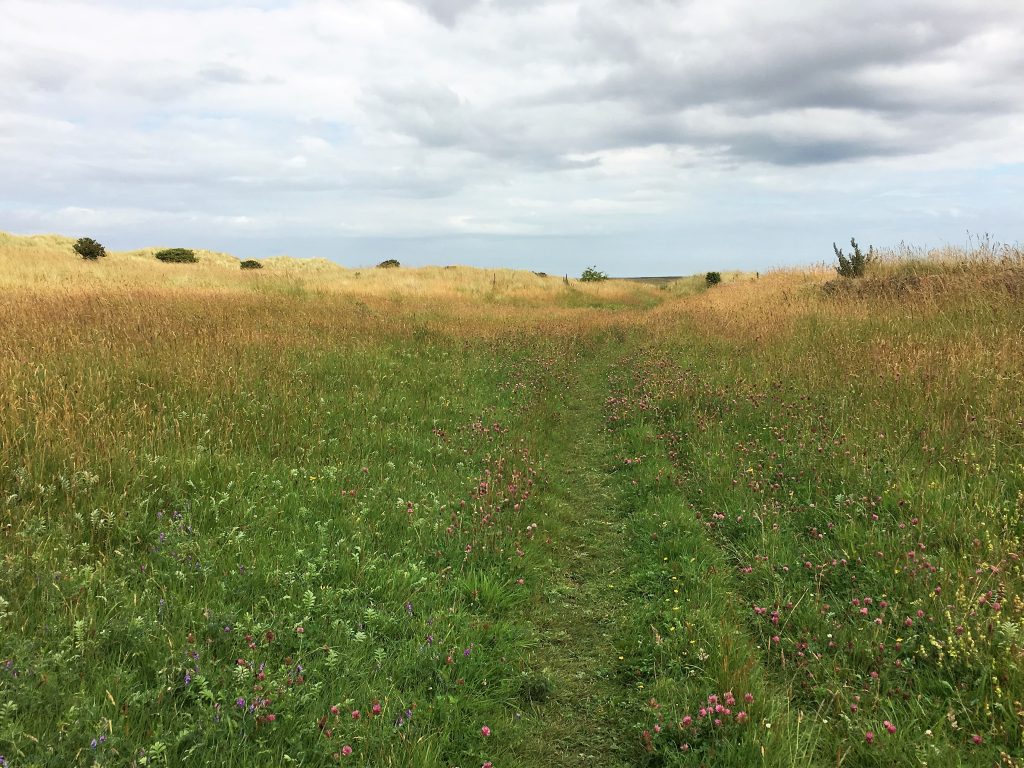 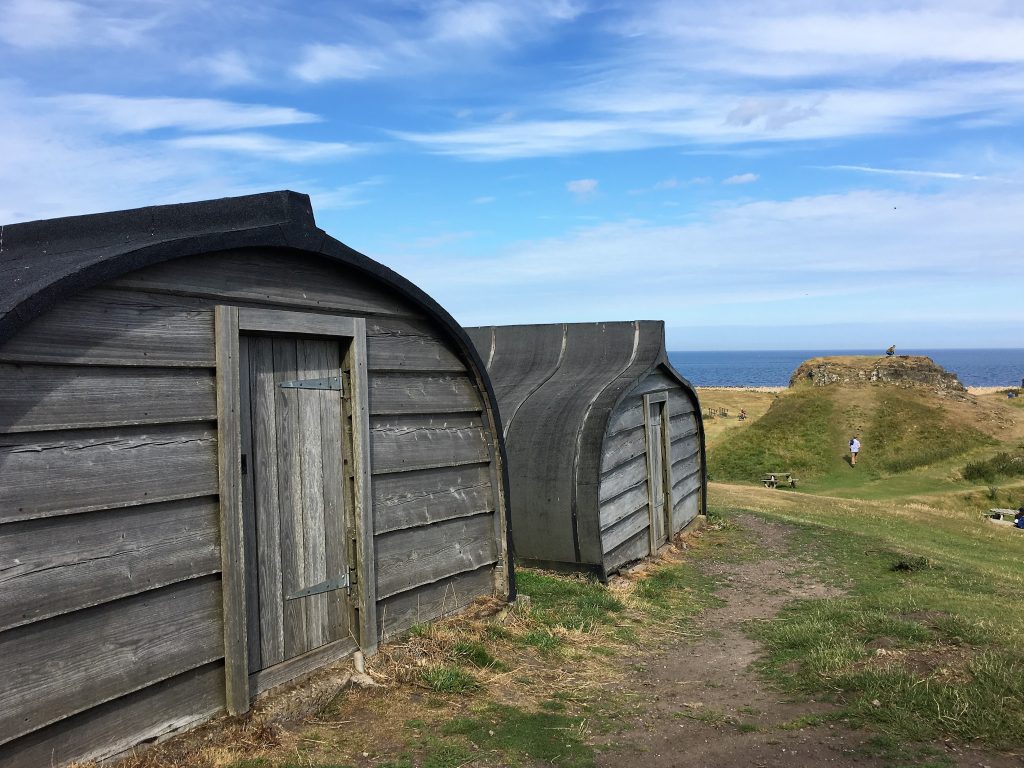 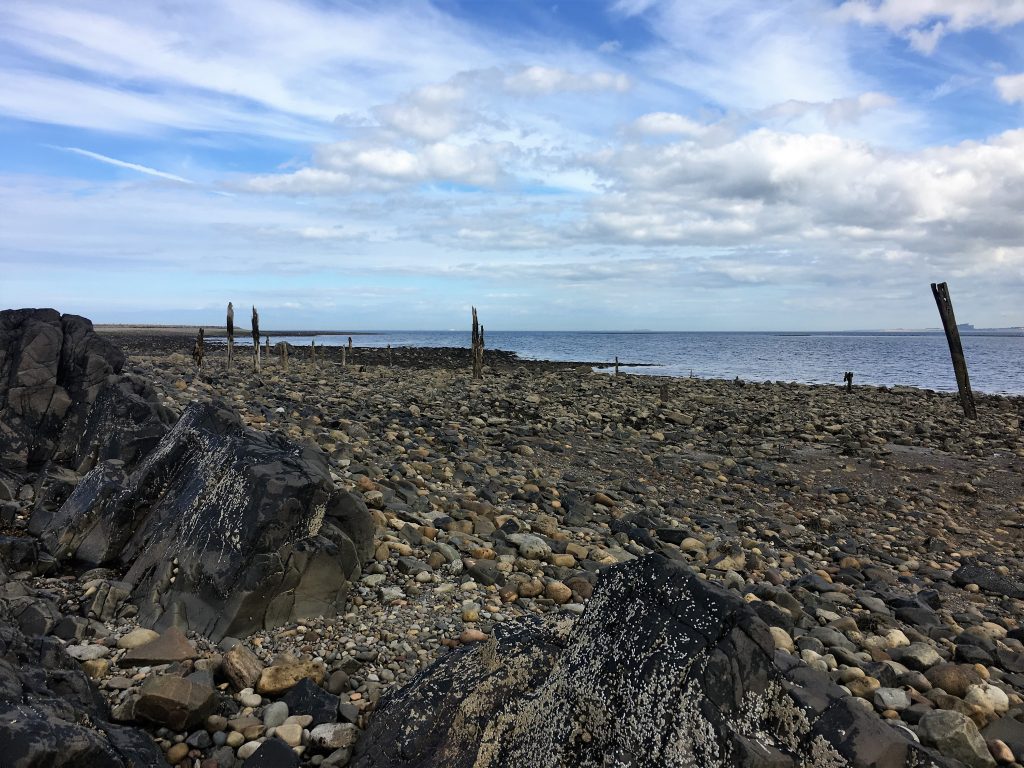 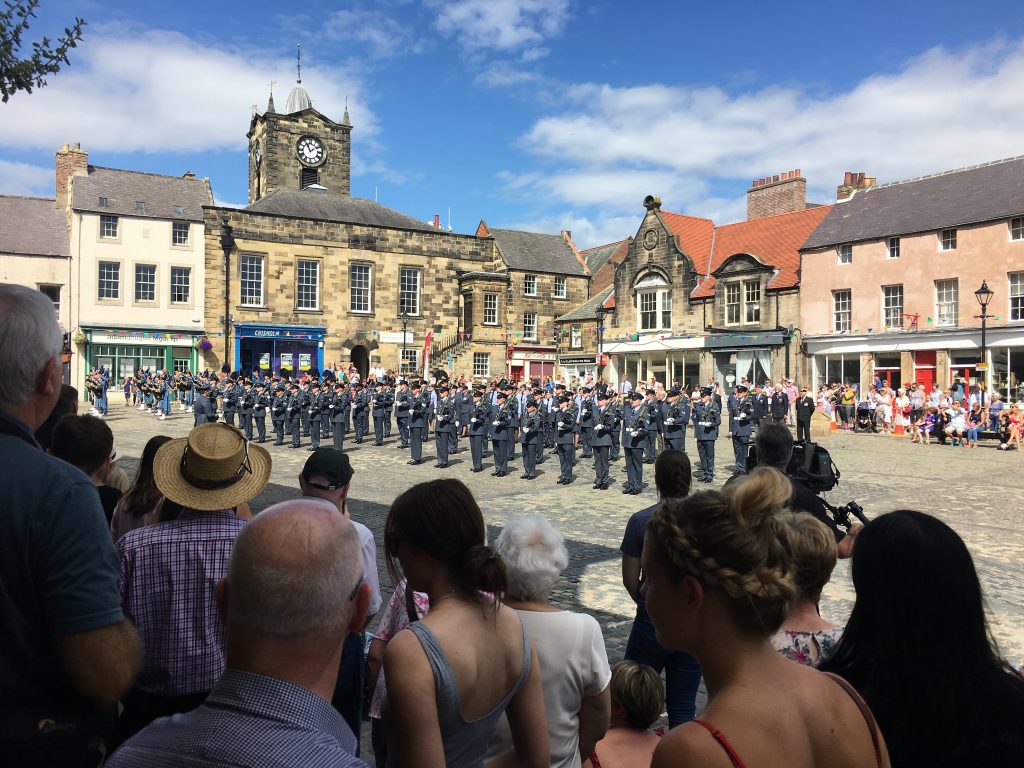 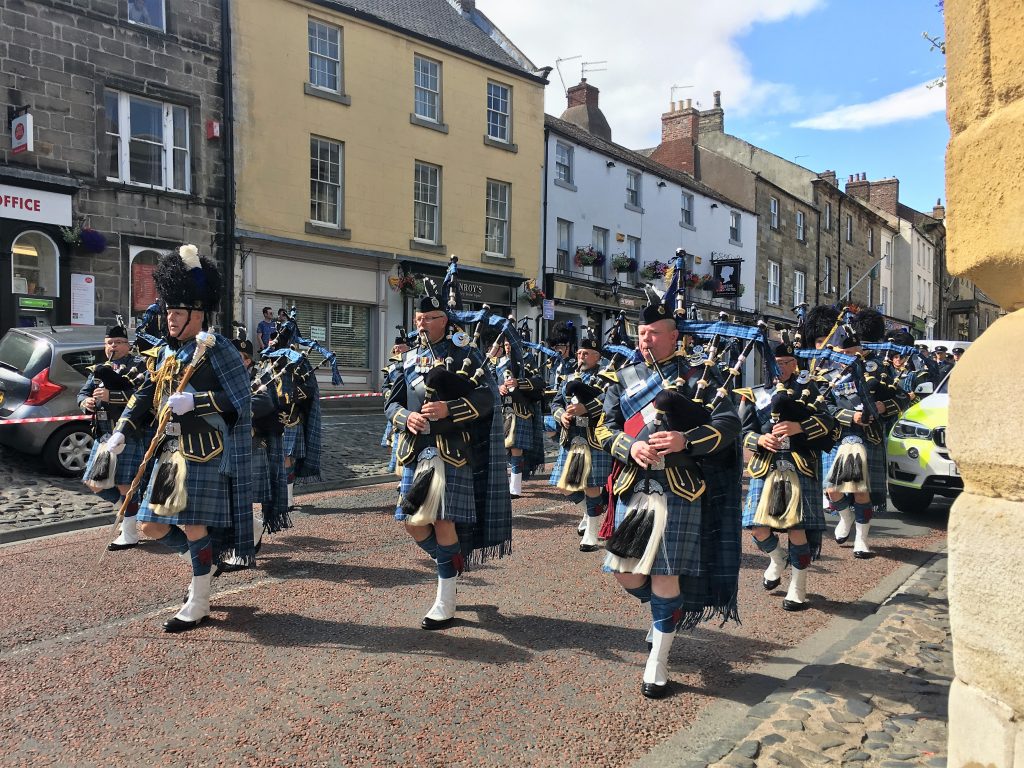 The Pipes and Drums – I imagine they were feeling rather warn 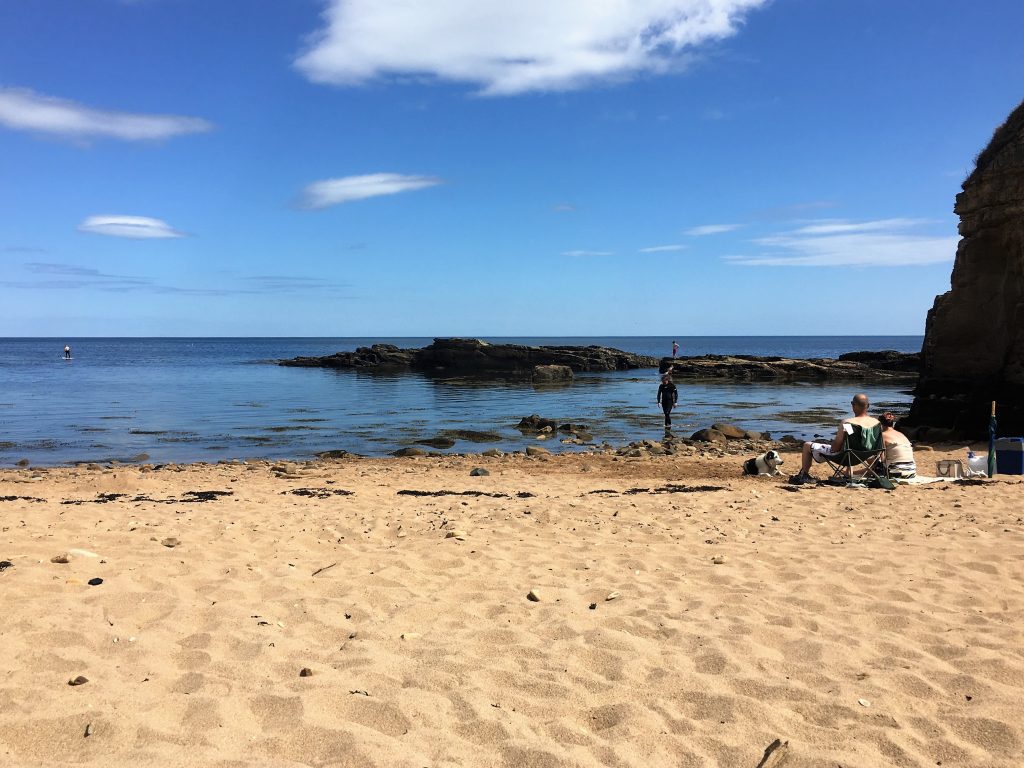 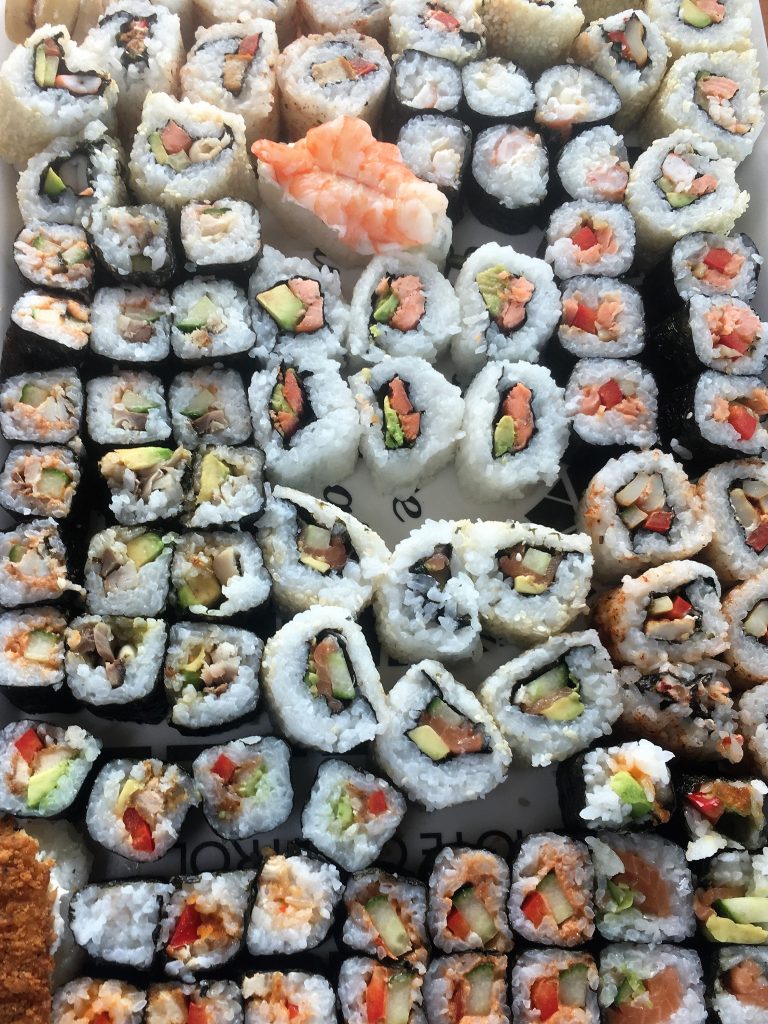 1 thought on “Sushi lessons in Northumberland”