After Ronda we made our way down to the coast to meet up with Aaron and his fiancée Katie who were joining us for a few pre-Christmas days in the sun. They had booked an apartment near Fuengirola in one of the sprawling white developments that characterise much of the Costa del Sol.

We spent the night before they arrived parked down at the Playa del Castillo, taking a quick walk into Fuengirola to depress ourselves in the shadows cast by the seafront tower blocks. The parking was definitely more pleasant than the town.

It was very odd moving ourselves into the spacious apartment, we’ve become so used to our little space and the way in which have organised it to work for us. The apartment felt very poorly designed and the space unproductive. We did enjoy the sofa though and a chance to sprawl.

We spent a lot of the time with Katie and Aaron doing holiday things, going out for meals, sitting in bars and cafes by the beach and generally catching up. However we did venture further afield on one of the days to visit the Caminito del Rey, the trail that runs the length of the El Chorro gorge, with it’s two sections of aerial walkways hanging halfway up the wall of the gorge.

We cant provide any insights into getting to the walk by Motorhome as Aaron drove us in his hire car, and so much has been written about this walk that I don’t intend to describe it again except to say that it is spectacular and well worth doing.

So any pointers from us? Remember to ask if any of the party have a fear of heights (Katie hadn’t realised what she was letting herself in for), read this page when planning your visit so that you get to the arrival point at the time you have booked, don’t take walking poles or anything else that you cant fit into a rucksack (we saw one gentleman having his poles taken from him as they don’t allow them on the walk – they did offer to take them to the end point though) and leave your vanity at home – hairnets and hardhats are compulsory. 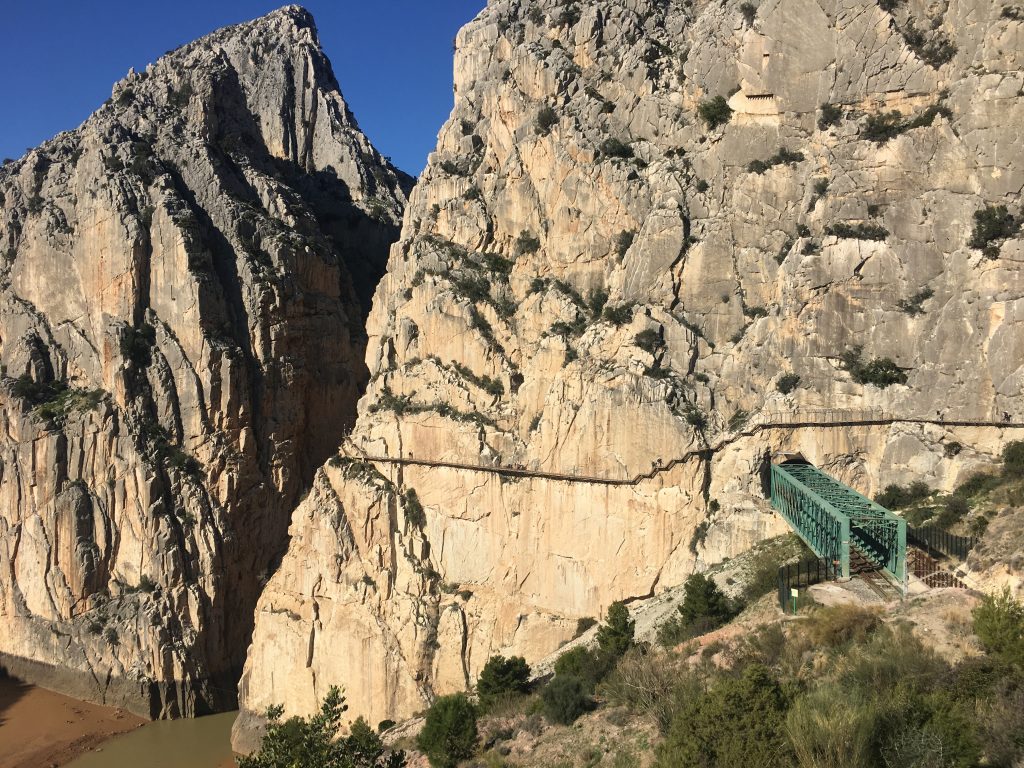 The final stretch of the Caminito as it leaves the gorge, seen from the El Chorro end 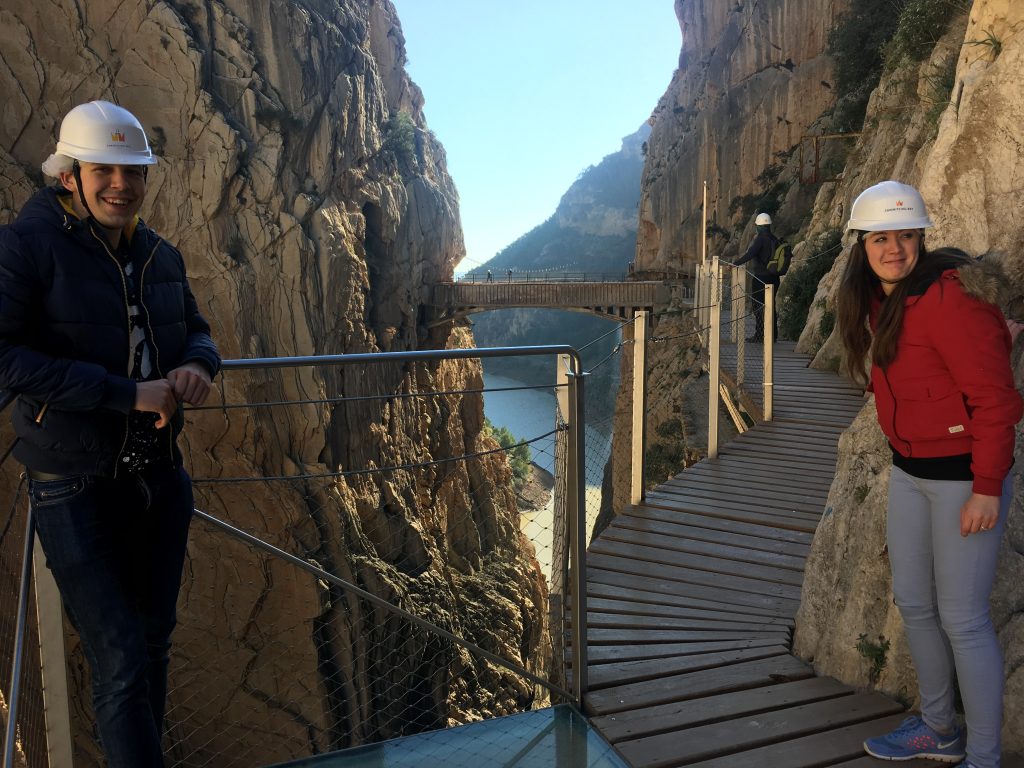 Slight trepidation about stepping onto the glass platform. The bridge in the background looks solid, but it’s deceptive – the actual crossing is a suspension bridge just behind the remains of the aqueduct you can see. 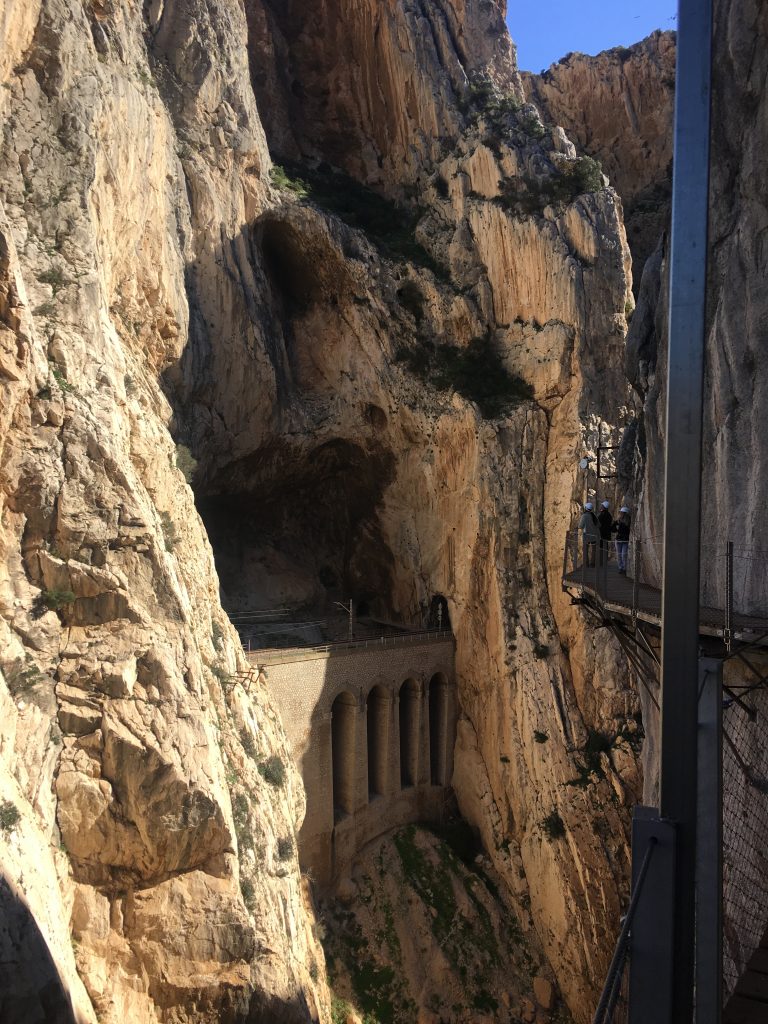 The train line runs on the opposite side of the gorge, mostly in tunnels but every now and again it pops into the open. It would be a good way to get to El Chorro to do the walk. 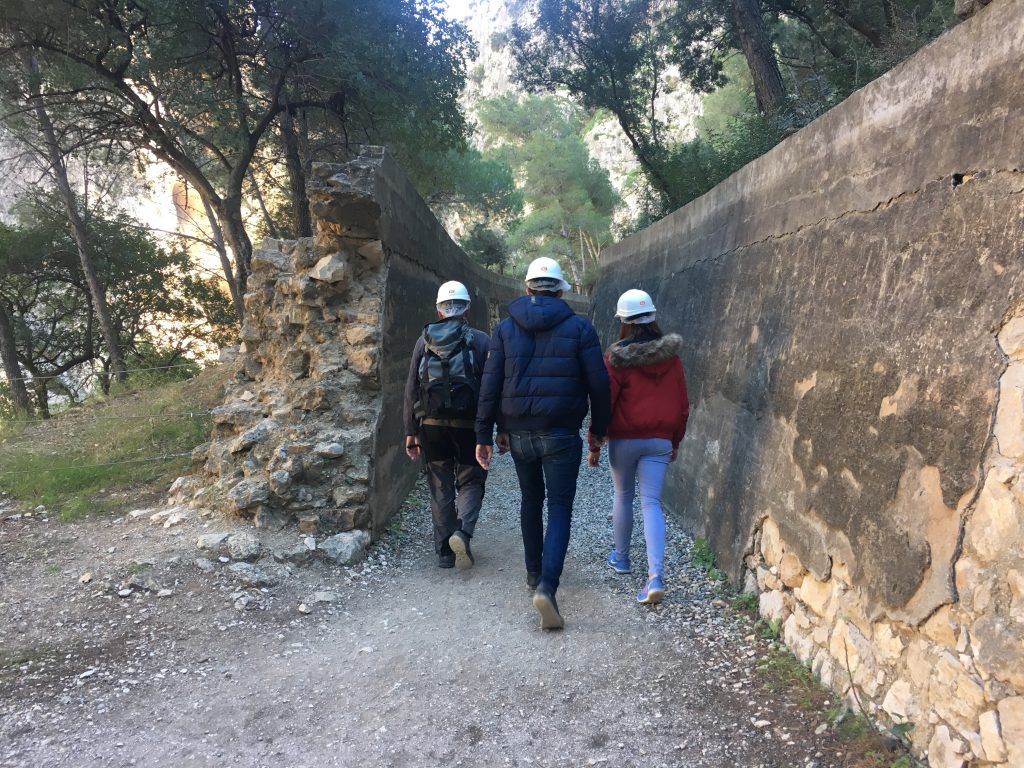 The original caminito was built to service the workings of the hydraulic power stations in the gorge – every now and again you can see the aqueduct, and at one point  (between the two sections of aerial walkways) you walk along it. 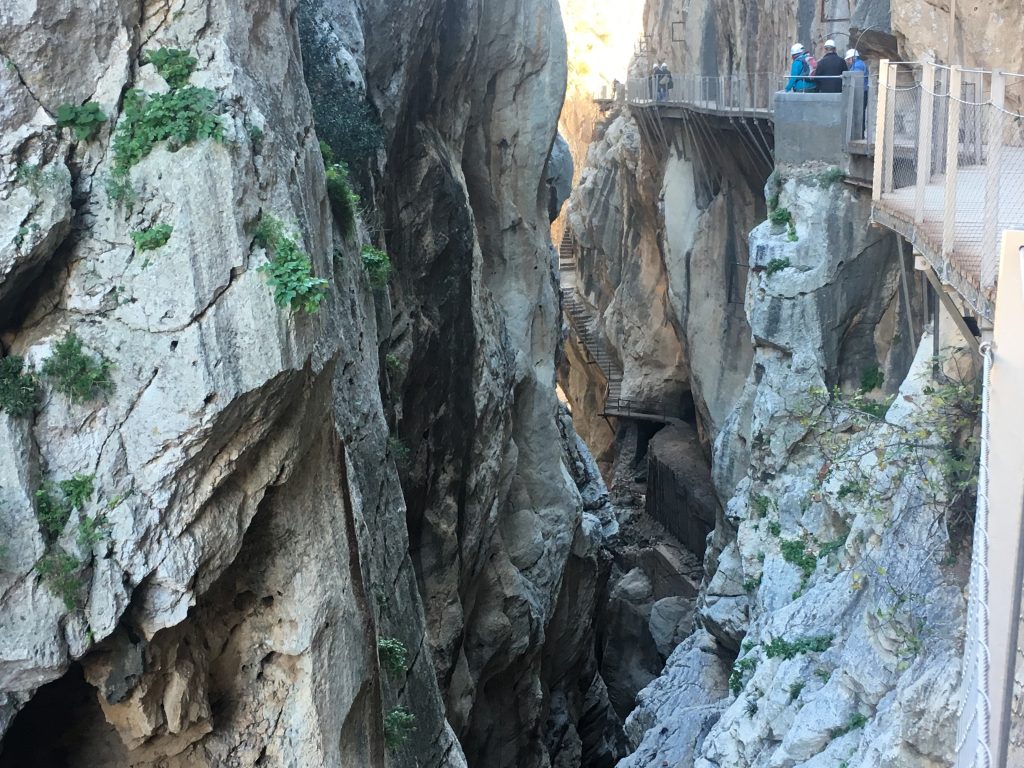 You can see sections of the original caminito from the new path. Much of it is still in place, although the concrete is rotten and the steel girders rusted. 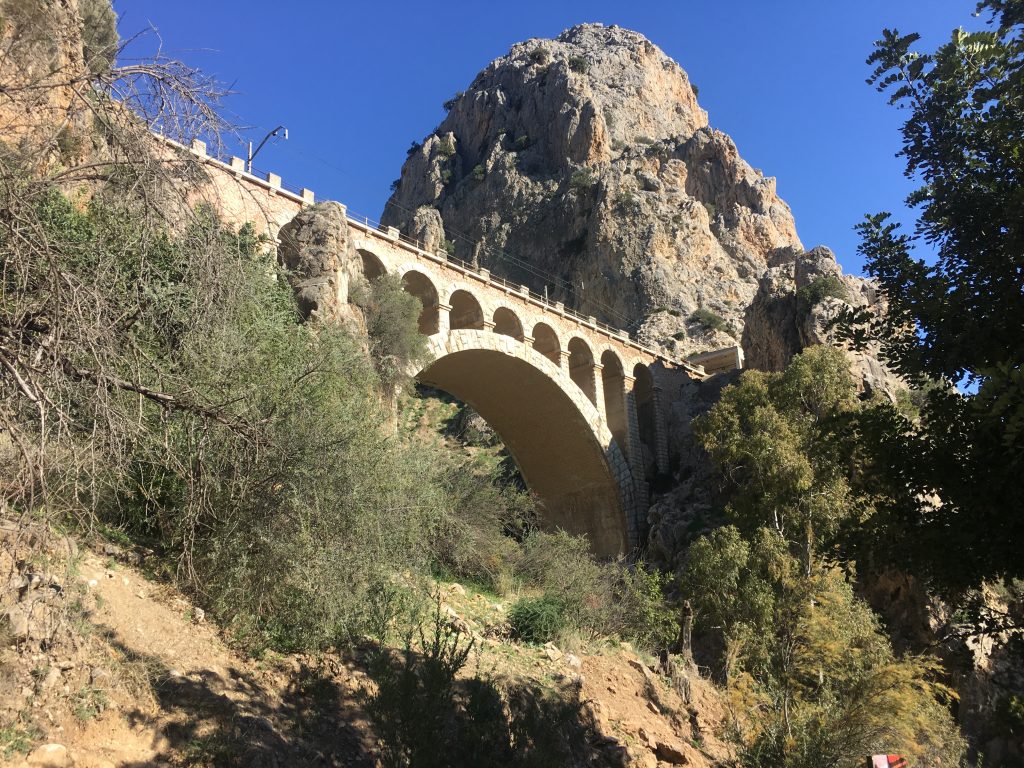 Railway bridge at El Chorro end of the walkways 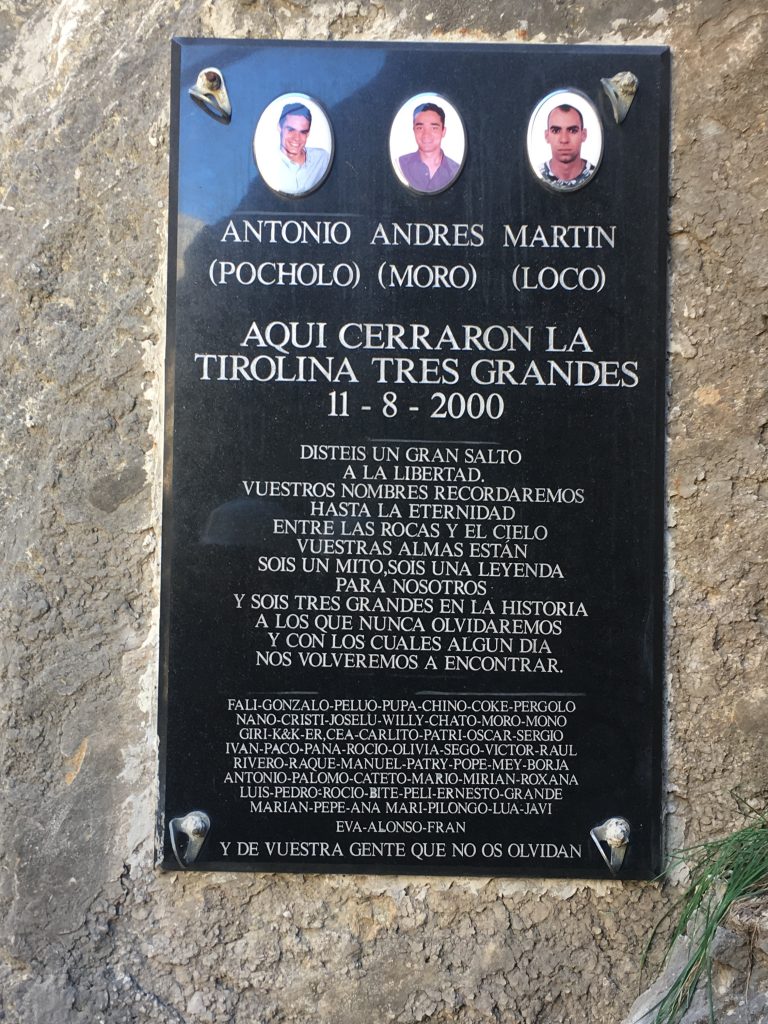 Memorial to three of the climbers who died on the original walkway. Although it was closed, climbers and adrenaline seekers still accessed the dangerous walkways. Plenty of climbers still use the gorge for rock climbing and we saw a couple on our visit clinging to the cliffs far above the railway line. 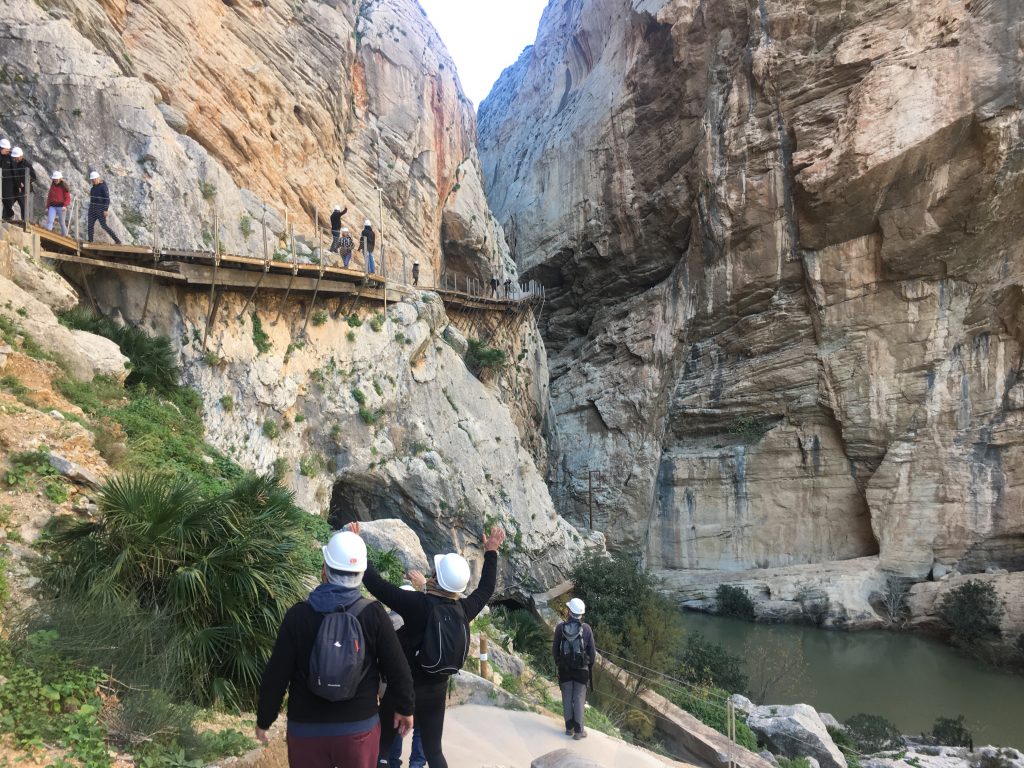 Near the end of the first section of the walkways. From here you could see plenty of griffon vultures wheeling above. 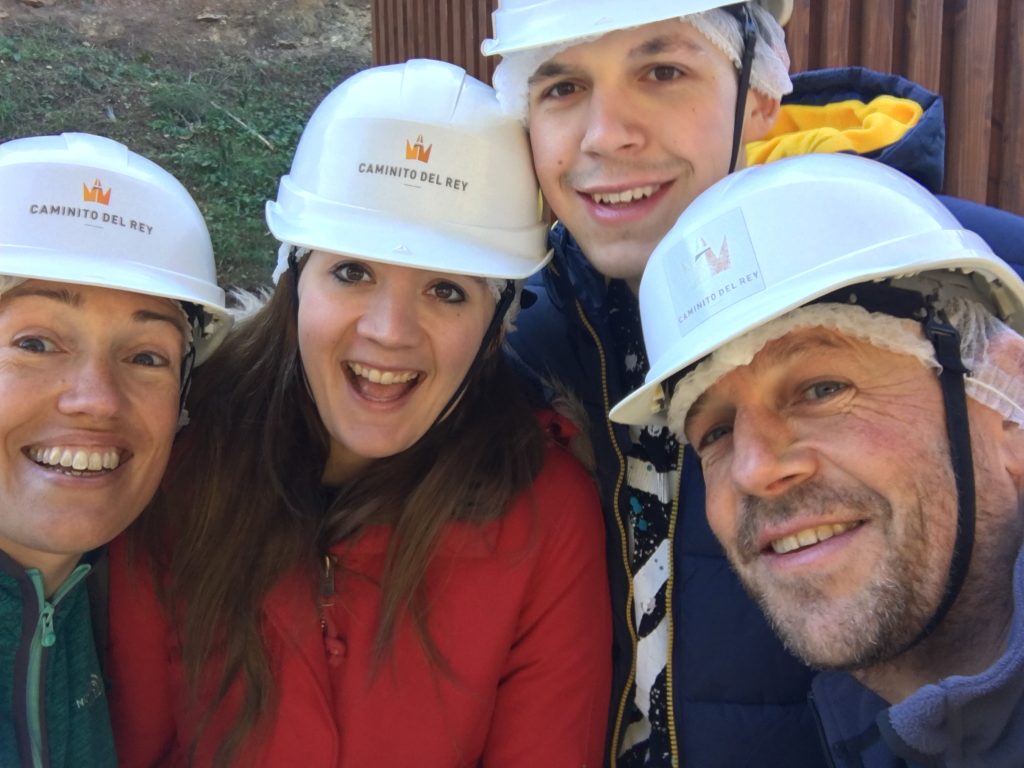 Hairnets and hardhats are compulsory and are handed out at the start of the walk.

On the way back from the Caminito we stopped at the Castillo del la Mota because we were intrigued by it. We’re still not sure what it is; a folly, a water tower or a house? Whatever it was intended to be, it doesn’t look like it was ever finished and the construction quality was poor. We climbed to the top to see the views. 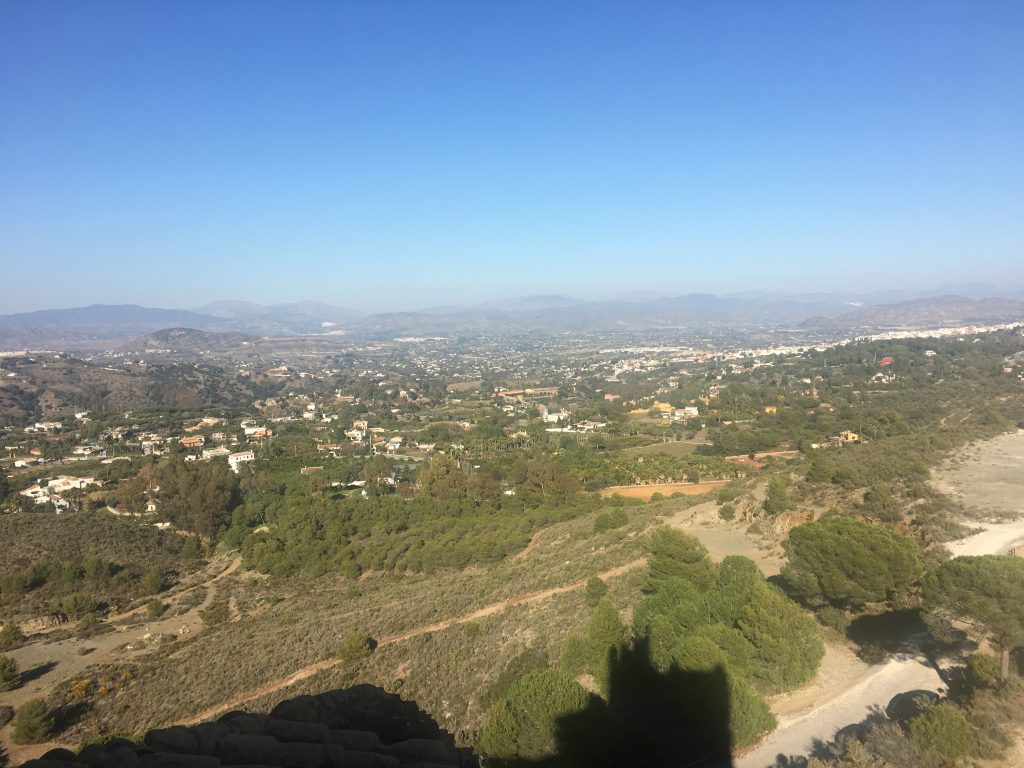