Our trip to Ronda took us by surprise. When we headed out of the Grazalema mountains we thought we would go further south into Cadiz and have a day or two in Gibralter before hot-footing it to Malaga to meet up with Aaron. But as we drove south, across fairly flat farmland, Paul suddenly exclaimed  ‘what is that?’. And we could see the impressive escarpment that supports Ronda coming into view. 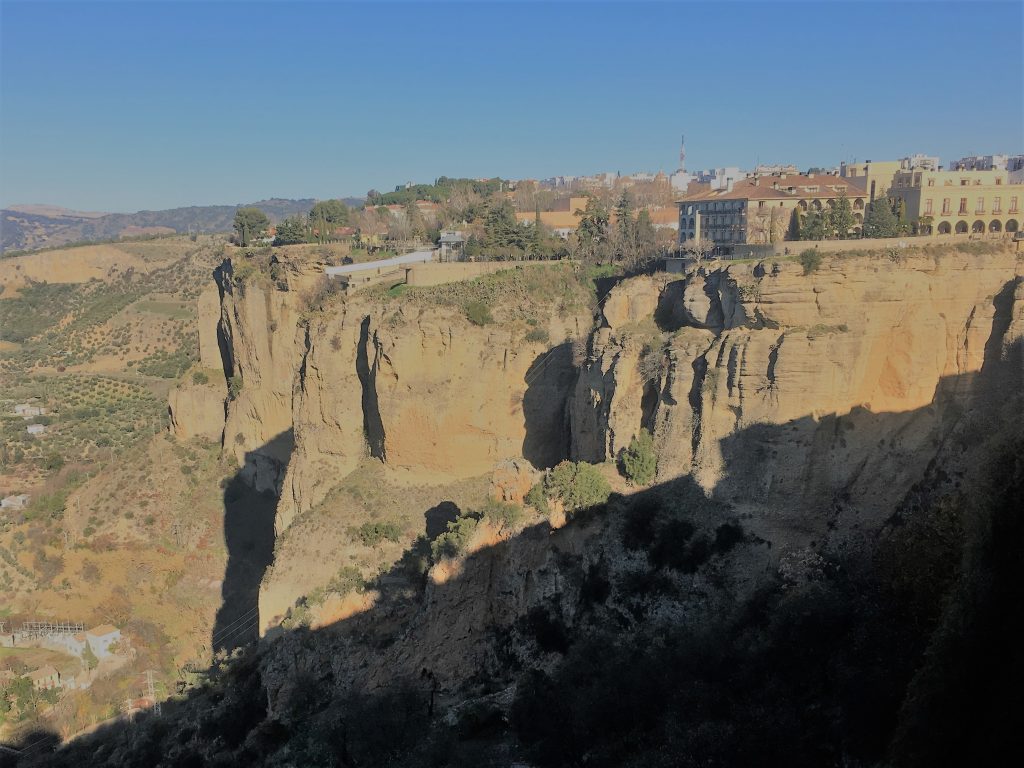 As I described Ronda to him, using phrases from guidebooks as I’d never been there myself, we came to the conclusion that actually we would like to see this town that sits precariously over the El Tajo gorge of the Rio Guadalevin. It was a bit of a frantic investigation then, to see where we could park and stay for the night. It’s not the most motorhome friendly of towns but on park4night we found a possible spot on the side of a road near the old town but still accessible to motorhomes. Quickly the sat nav was updated and we followed it off the main road, down a rural lane to suddenly arrive on the outskirts of Ronda, making it just before twilight turned to full dark.

Despite the youngsters walking by and the waste-ground to our right we agreed that it seemed ok for a night, it’s odd how a place that can seem unprepossessing in print can actually ‘feel’ fine. It ended up being a quiet spot where the most frequent passers-by were joggers who I always feel are too knackered to think of doing anything untoward – at least that’s always how I felt when jogging.

Waking up in the morning we were greeted by cold air but blue skies, ideal for a day of sight-seeing. We had done some research in the evening and flagged a few places we wanted to see, but it’s such a compact town it felt really easy to just wander. We headed first of all for the Puente Viejo, the closest bridge over the gorge. We had fancied taking the steps down from near here to the bottom of the gorge but with the frosty morning they were closed. From here we wandered under the walls of the old town and then up through the Arco de Felipe V – at one point the main entrance to the town. 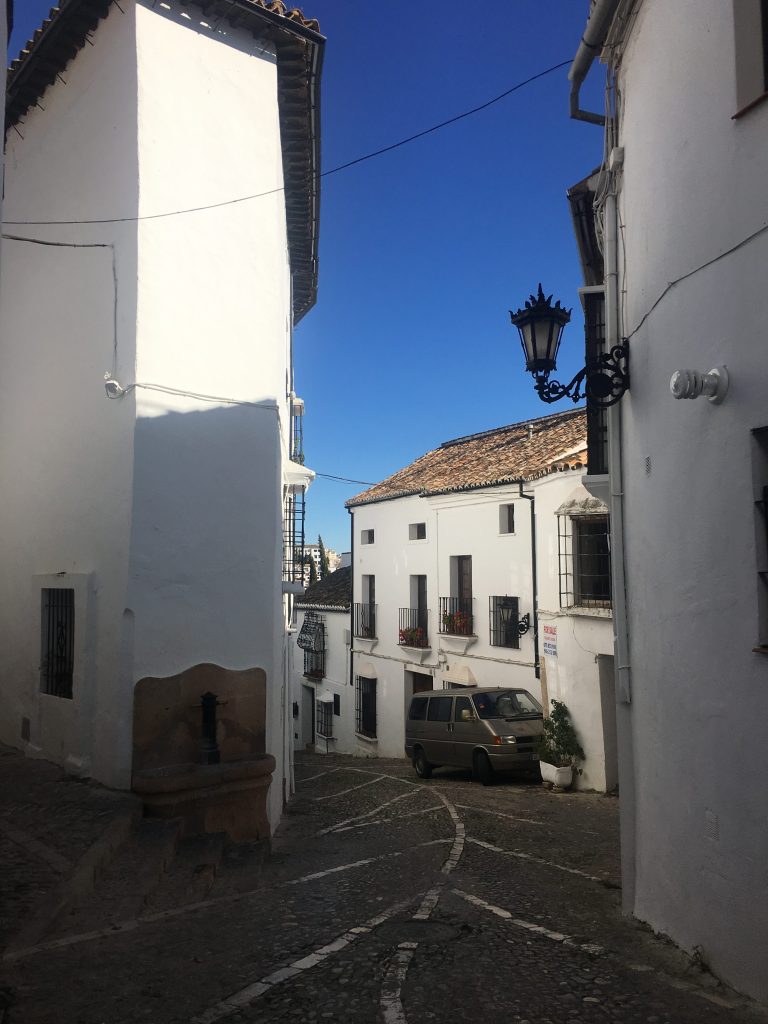 The narrow cobbled streets of Ronda old town, but still navigated by cars and bikes 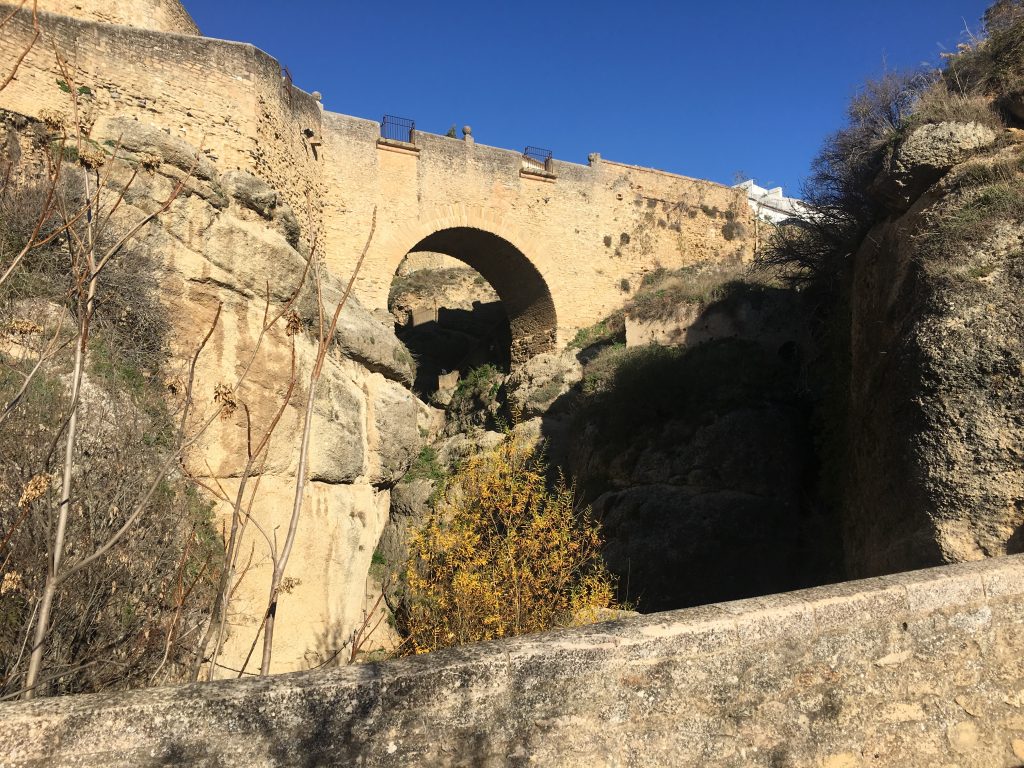 The Puente Viejo or the Old Bridge, but not as old as the Arab Bridge, which isn’t Arabic. I suppose it’s too late to change the names? 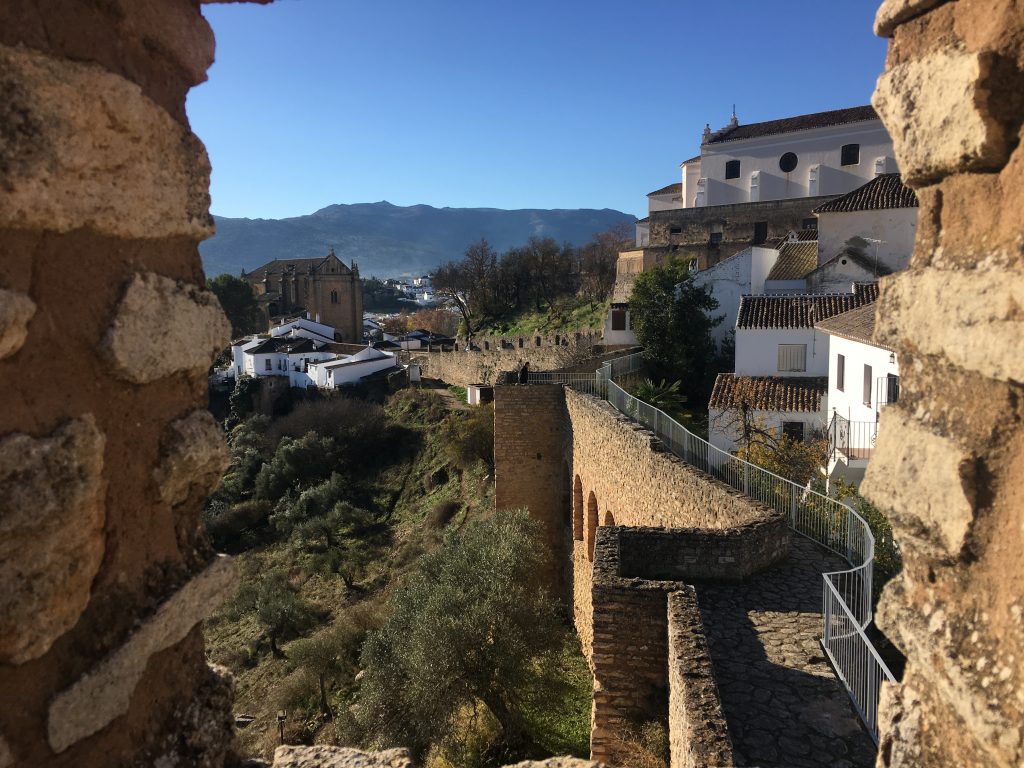 Looking across the city walls of Ronda

Here we were able to climb up steps to the top of the wall where, at a certain height that someone must have calculated to be the ‘certain death if you fall’ height, there were barriers in place.

We wandered up through narrow streets which were open to cars and bikes although I’m not sure I would have driven through them. The next major sight was the Puente Nuevo, the most distinctive bridge over the gorge, where it is said that dissenters met their deaths during the Spanish Civil War. We wandered around this area looking for the best vantage point to see the bridge and the gorge, we particularly liked the terrace around the side of the Parador hotel where you could look back to the bridge and also out to the mountains. From here we could see that there was another point where we could descend further into the canyon, from the Plaza de Maria Auxlliadora so, after a bit more wandering through the streets and tourist shops of the new town, we ended up descending down to bring us closer to the foundations of the bridge. 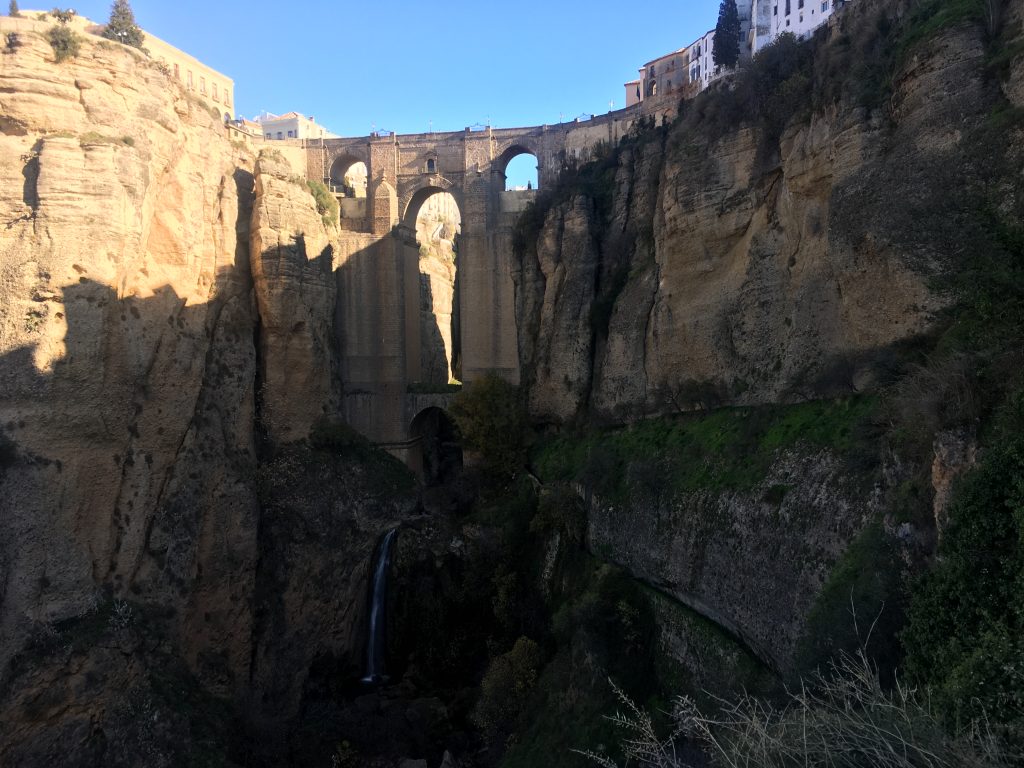 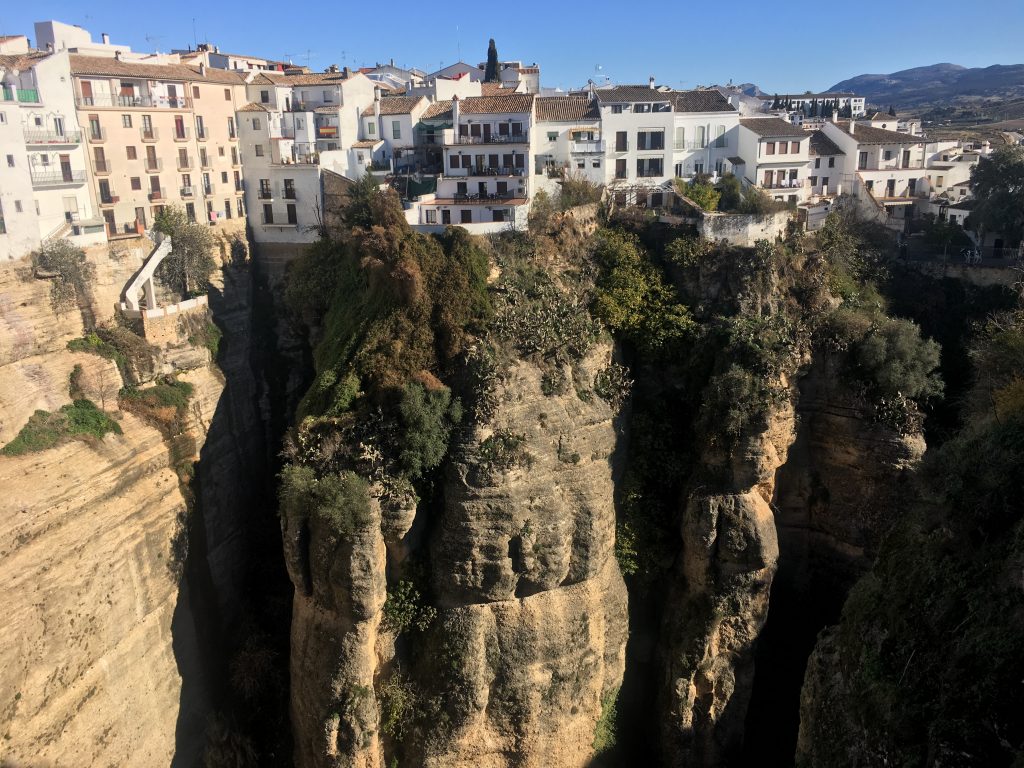 We looked over the El Tajo gorge and wondered at the process of building so close to it’s edge. We particularly liked some of the balconies that had been built into the canyon walls.

We tried to remember that every step down would be a step back up, but it was tempting to continue to descend into the chasm. Finally our stomachs told us that we had to turn back to get some lunch, and we made our way back up and through the old town to find somewhere we could pick up a bocadillo taking in a few more sights as we went. 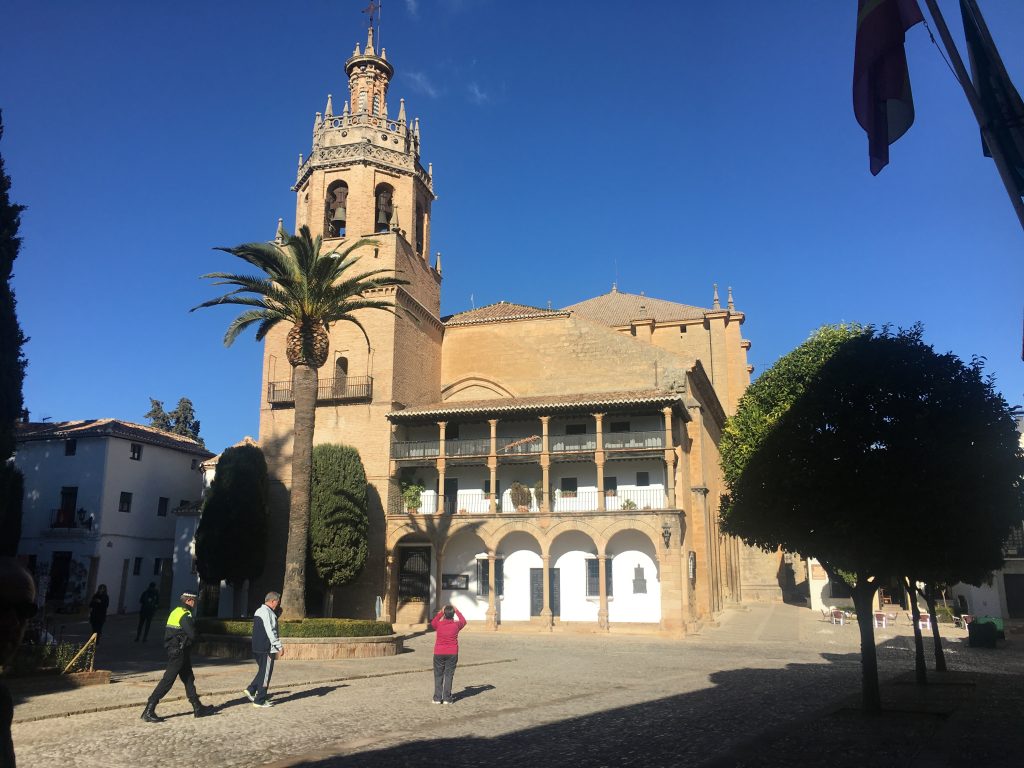 Iglesia Santa Maria la Mayor, built on the ruins of the mosque it’s a beautiful combination of architectural styles 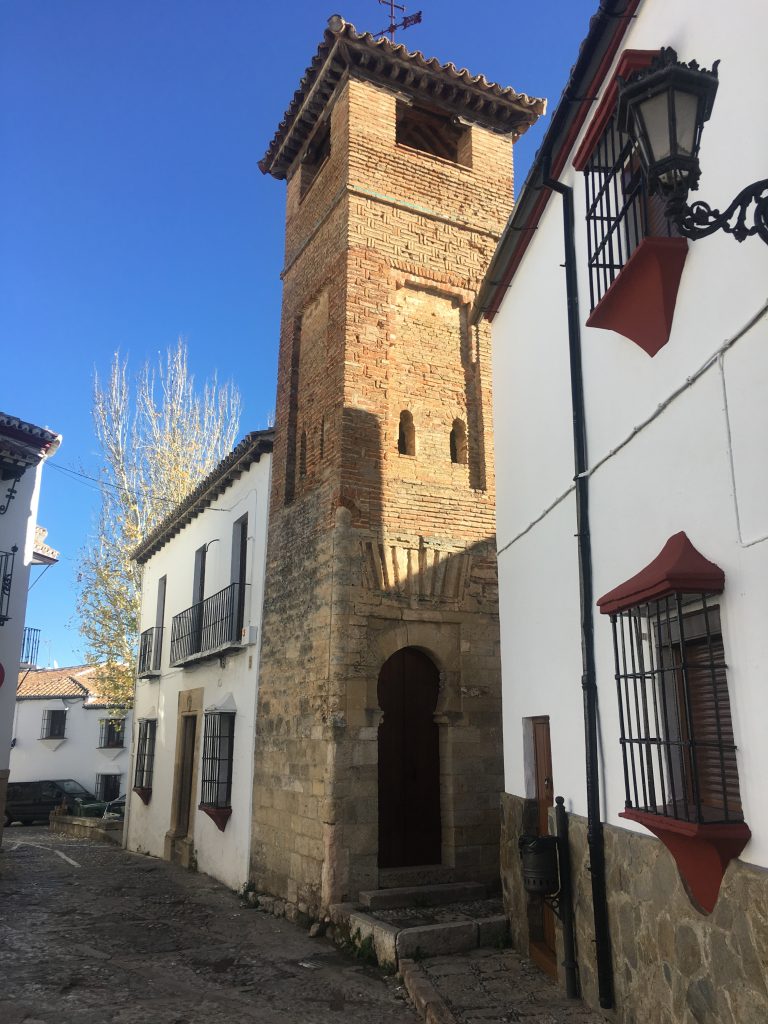 We were really glad we had stopped off at such a spectacular place, touristy but justifiably so. We could have stayed for a couple of days just meandering through the streets and wondering at the way the town is made of  so many layers, but we had a rendezvous to make so unfortunately had to move on.

As we walked back through the town to Bertie we saw lots of houses for sale with notices extolling their tourism potential, I wonder what it’s like living somewhere like this, very similar I imagine to living in some of the picturesque Cornish villages. Looks lovely, but full of second homes and difficult for the local population to afford.