Our lovely sunny weather in Molveno was just a momentary blip. The weather forecast was showing temperatures dipping again, with snow in the mountains. We thought we had better top up with GPL so that we weren’t at risk of running out in the middle of a cold night.

As mentioned before, getting GPL in Italy can be a bit nail biting because it is not strictly permitted to sell GPL at fuel stations for any reason other than propulsion. Plus you cannot fill your own GPL in Italy, a fuel attendant has to do it for you, so no chance of sneakily filling up before they notice. We have purchased GPL multiple times in Italy before without any issues but after six months of Italian travel (in two trips) our luck had finally run out. The pump attendant in the Q8 in Trento came out pointed at our diesel filler cap (which actually says water, but he wasn’t fooled) and in no uncertain terms told us he wouldn’t provide us with any GPL. Luckily I always have an option in reserve and so we left swiftly and travelled a couple of kilometres down the road to the AGIP fuel station who filled us up without any problems.

We popped into the Lidl in Trento on the way through, but we decided we weren’t in the mood for city streets so set our sat nav for Castel Pergine which sits on a small hill outside the city. We had been considering staying here overnight as it had good reviews on Park4Night, but on arrival we found the car park a bit too sloping for our tastes, with half of it barriered off while they cleared yet more fallen trees. Instead we parked up for lunch and wandered up for a look at the castle which houses a hotel and restaurant but also open to the public for sightseeing.

The 13th century castle was interesting to walk around, although we felt like trespassers as we tiptoed around in the monastic silence of the halls and stairwells where only faint echoes of clinking cutlery hinted of any life. It was never entirely clear where we were allowed to go, at one point finding ourselves in the unattended and tempting wine cellar and at another point opening a door to find an office. We listened at doorways to ensure that we were not going to inadvertently wander into a guest room or the restaurant. Every now and again we spotted a member of staff from a distance, but no one spoke to us. 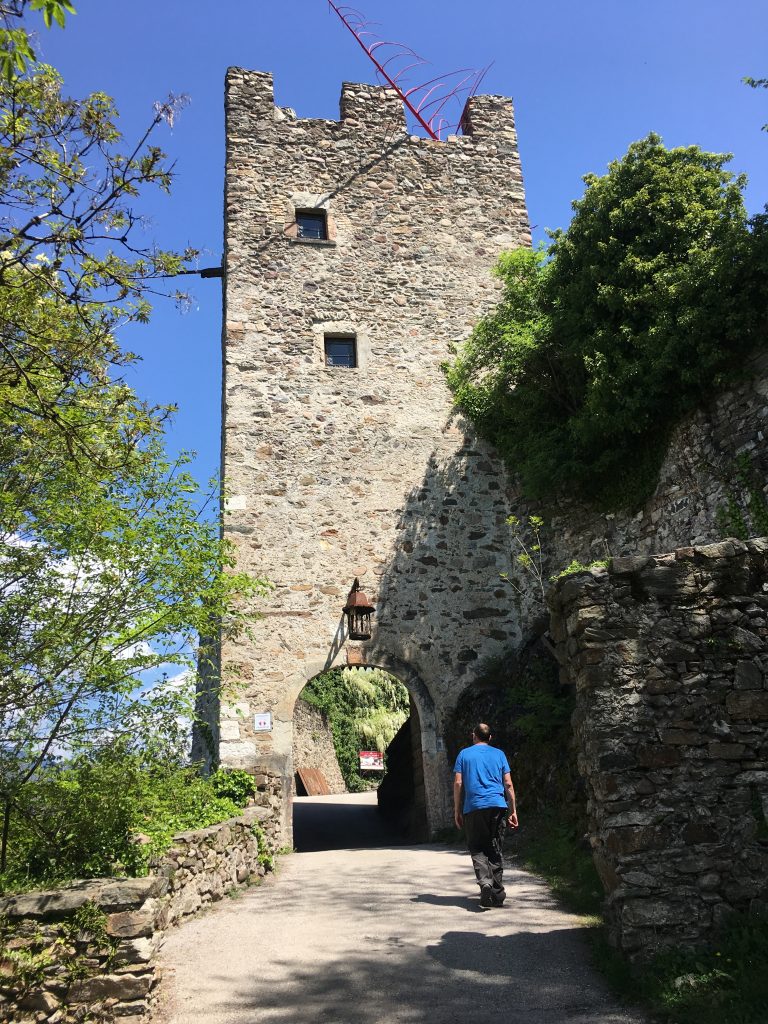 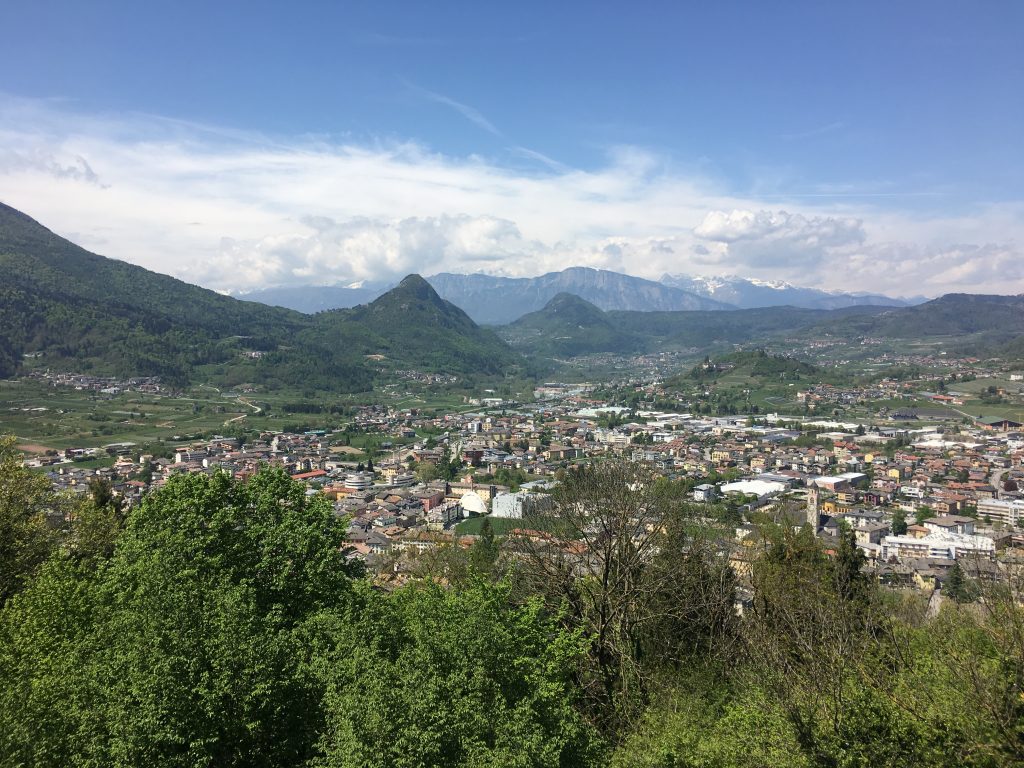 When we found the restaurant menu we were disappointed that we hadn’t thought of staying for lunch, it looked interesting and good value. The outside bar and café area also looked inviting with signs welcoming cyclists (there is a nearby cycle path and mountain biking tracks through the forest).

The castle also hosts art exhibitions and there was a selection of wooden sculptures around the grounds and within the castle building to add a bit of interest, although Paul was slightly disparaging about art made from wooden pallets. 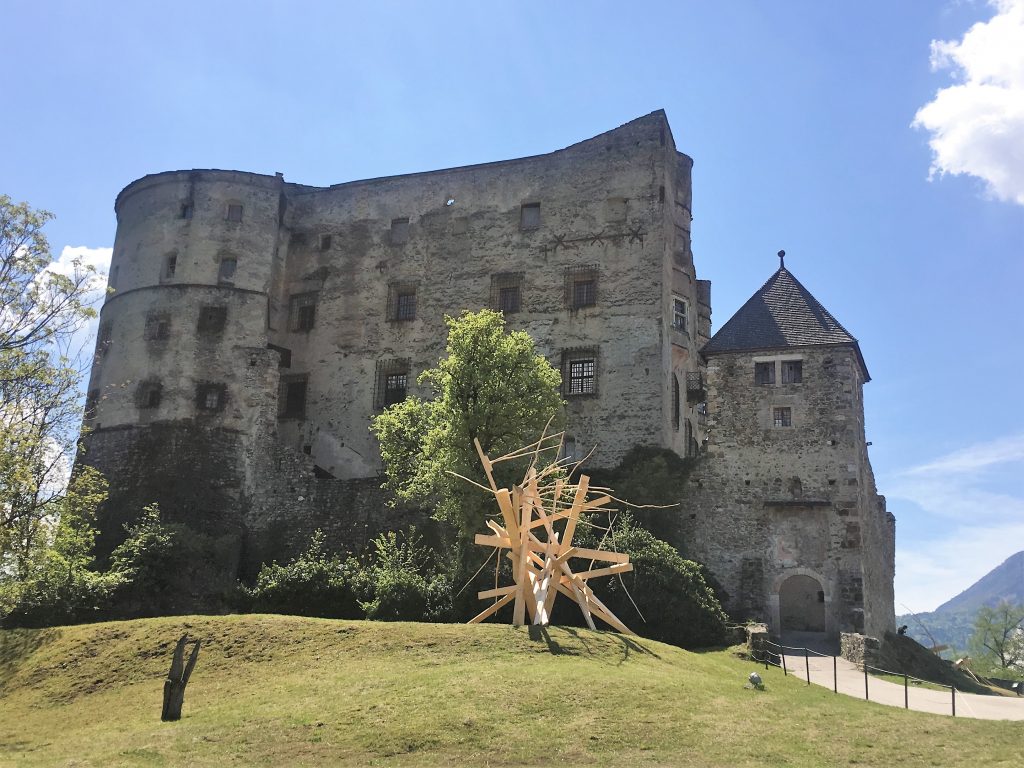 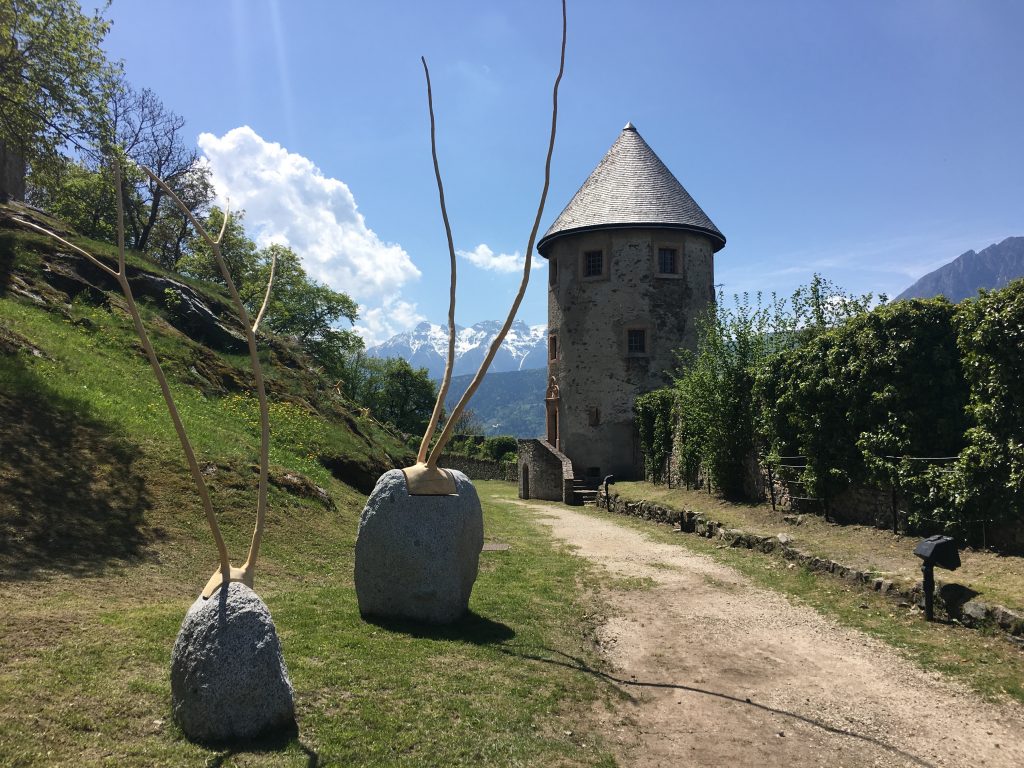 Some of the art in the castle courtyard

Having spent a couple of hours wandering around we decided to drive on to another parking spot, so we set ourselves in a slightly north easterly direction and Paul drove while I searched for somewhere to overnight. In the end we decided on San Martino di Castrozza, a ski resort (closed for the season) with a paid sosta. We paid to use the services in the sosta but decided that we would park for free in the large ski lift car park as the height barriers had been opened up.

The views here were spectacular, we sat in the van that afternoon watching the spires and cliffs of the dolomites as they were covered and revealed by thick cloud. On the adjacent cliffs the work of the lumberjacks was equally mesmerising as they removed fallen trees from seemingly impossible locations. The signals of the winch operators (loud beeping of their horns) a constant soundtrack during daylight hours. 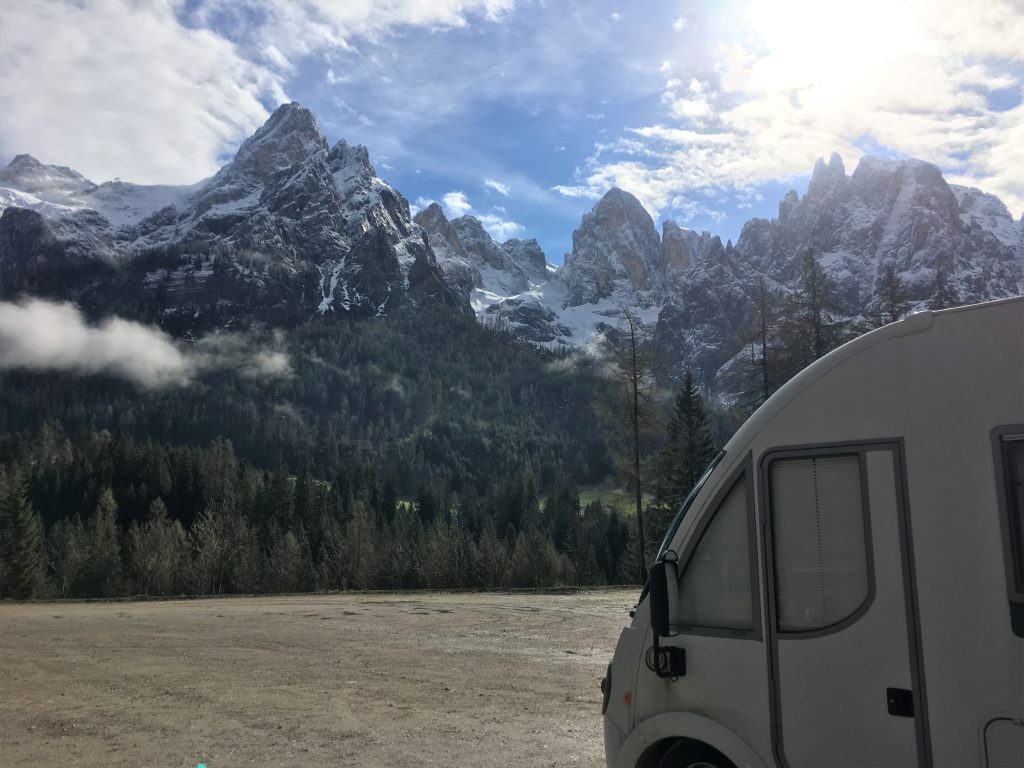 The following morning started bright and so we took a walk along tracks that took us up the ski slopes. We ended up having to change our plans due to the depth of the snow on the paths. We hadn’t thought about taking our snowshoes with us. I suppose we’d been fooled into thinking the snow had all melted by the recent warm weather, but where the ski resort had been making artificial snow it was still over knee deep. Instead of heading uphill we followed the lower paths through the forests and adventure parks that were waiting for summer visitors. 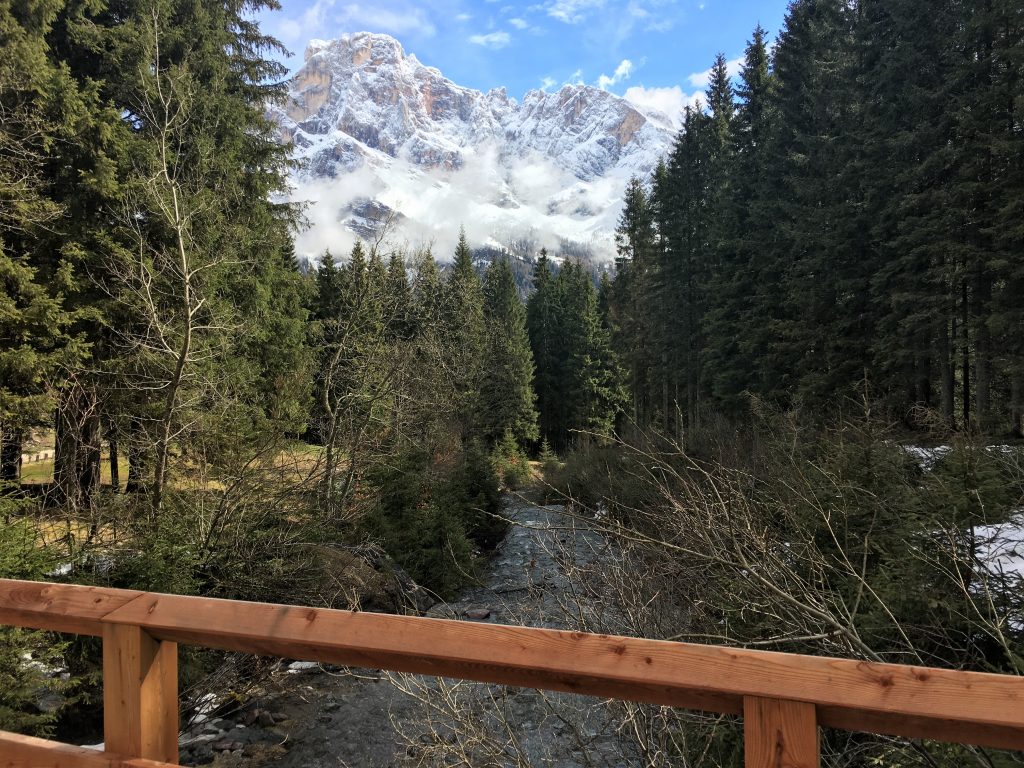 That afternoon we debated whether to stay for longer, but were concerned about the cold temperatures and snow forecast for the next few days so thought we should head down into a valley. We set our sights for the Val Gardena but it proved to be a longer and more difficult drive than we imagined. At first it was enjoyable, zig-zagging up and over mountain passes while we still had stupendous views, but we couldn’t find anywhere to stay in the Val Gardena, campsites were closed and car parks chained or barriered. The only available parking was still up in high and potentially cold locations. Finally we knew we couldn’t keep on driving and stopped at one of the higher car parks. Santa Maddelena is a pretty village with some tiered parking above. We were obviously too big for the parking and had to park across several spaces, fine at this time of year because no one else was going to join us, but very anti social in a small car park. 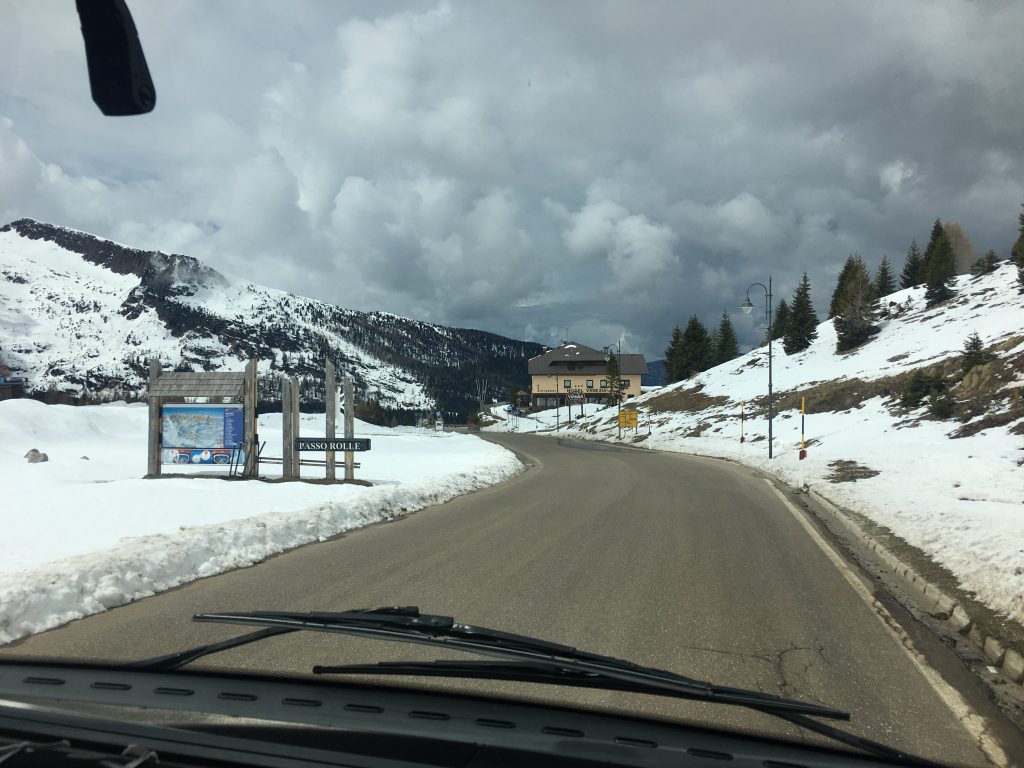 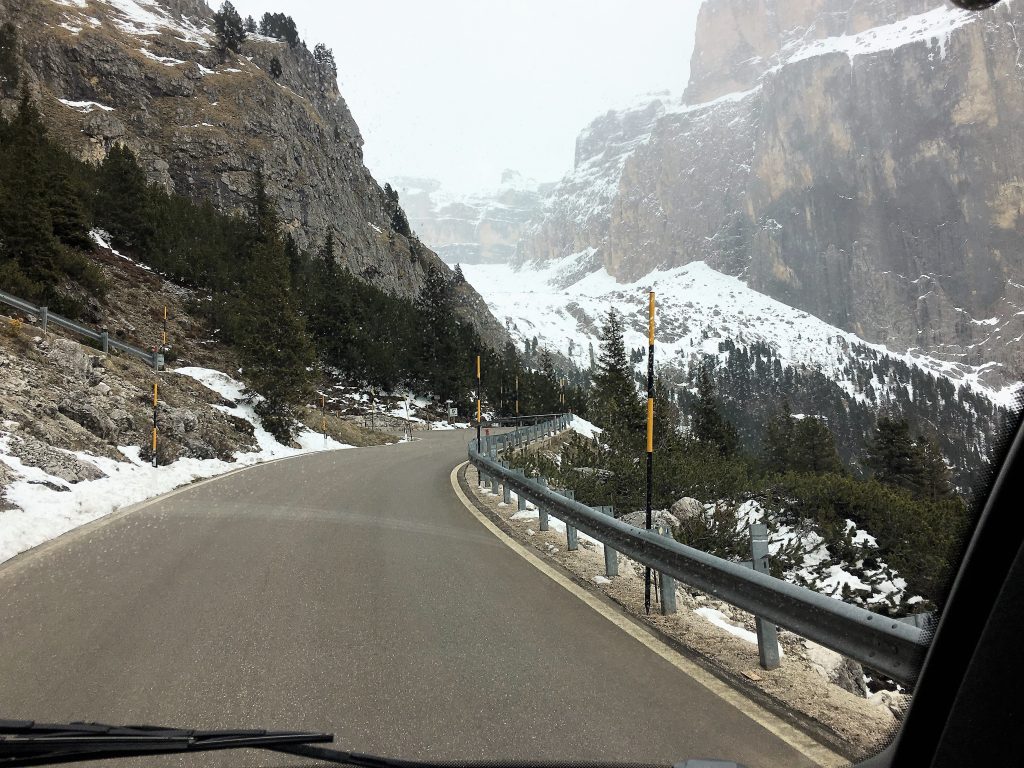 We had a short walk up the valley to the small chapel that is one of the main tourist attractions here but the weather was deteriorating and the mountains had been swamped with cloud so we couldn’t see the views that make it a particular instagramm favourite. 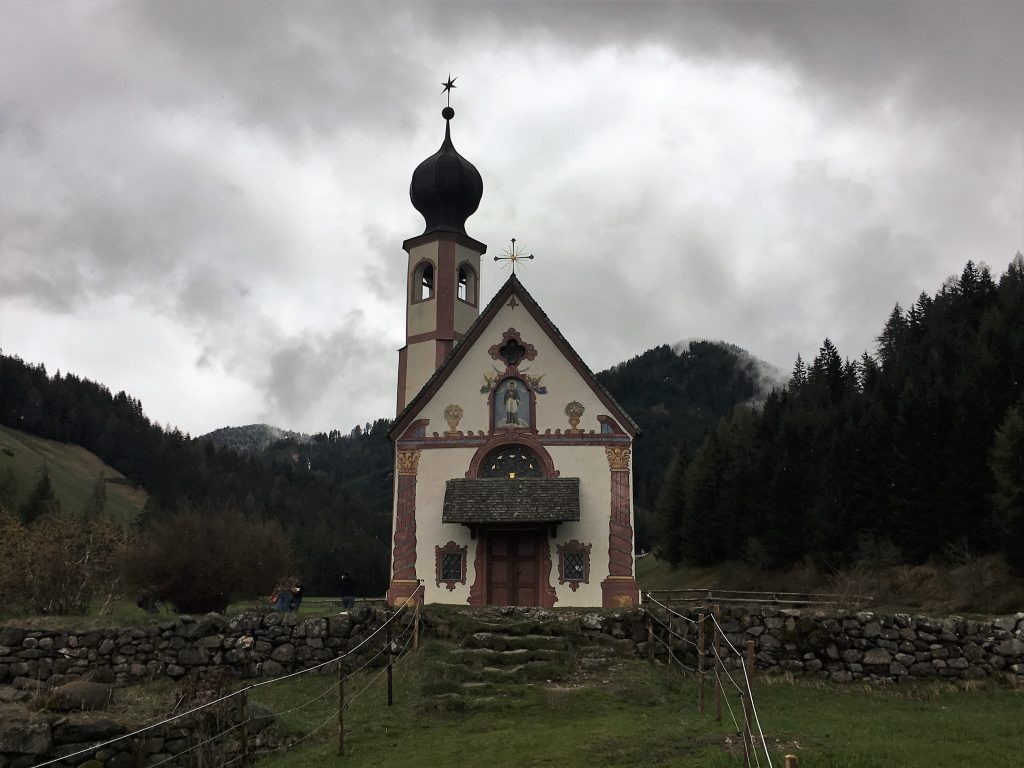 Santa Maddelena chapel – the Odle mountains are behind that cloud somewhere

As the rain started falling we decided that we would stump up the money to stay in a paid sosta. At €18 a night the sosta at Camping Gamp in Chiusa was more pricey than a lot of campsites and is in what feels like an old train station yard. Here in the Val Isarco the main language is German and it was a shock to have to shift from a romance language to a Germanic language. Luckily I did German at school (a long time ago) and was able to communicate as the campsite warden explained how to find the spot to empty our toilet (not in the campsite OR in the sosta – that should probably be stellplatz) and then how to find the sosta. It wasn’t the most exciting of parking spots but we had electricity for heating and were at a low enough altitude to (hopefully) avoid any snow. We sat in the van for the rest of the day sheltering from the rain, planning our slow journey home through Austria and Germany and watching our German neighbours attempt to out for a cycle ride several times before giving up and packing their bikes away.

We had seen so many fallen trees recently that we wanted to find out why, so we used this afternoon to do some research. The swathes of fallen trees across the hillsides are far in excess of anything we’ve seen before. Storms, snowfall and avalanches will always cause some trees to fall, but in October 2018 there was a particularly violent storm. It’s the sort of news that gets a single mention in the UK but then is overshadowed by Brexit. The storms hit northern Italy and caused significant damage on the coast with harbours destroyed and Venice flooded to it’s second highest ever level. In the Dolomites the winds caused massive damage to trees with one newspaper article estimating that 14 million trees were felled. It must be a good time to be a lumberjack and a bad time to be a timber merchant. Obviously the priority was to ensure that people were safe, services were restored and transport routes were open. Clearing the walking and biking trails for summer tourists must have come a long way down the list, but now that the spring is here there is a lot of activity trying to prepare this tourism dependent area for summer. 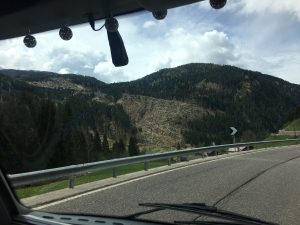 A massive area of fallen trees 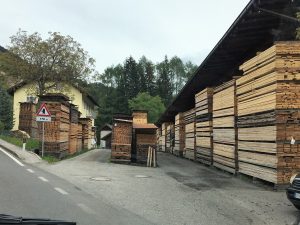 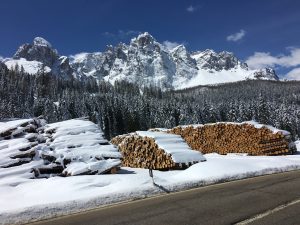 Piles of logs in a potential parking area