We had reached the conclusion that the Dolomites were rather expensive for motorhome travel. Often we hear people complaining about the cost of travelling in Italy and we figured they must have been in this north eastern corner of the country because the rest of the country had been relatively easy on the wallet. It wasn’t helping that we were travelling at an awkward time of year. A little later and the weather would probably be more conducive to parking at the free spots high in the mountain passes, but it had been cold, snow was still on the ground and the free car parks were full of timber.

We were planning to be back in the UK for the end of May, so we figured we might as well start making our slow journey back through Austria and Germany. Before we left Italy and the Dolomites we had one last destination, the Tre Cime nature park. We had two possible parking spots in mind, a high altitude parking spot at Misurina or a slightly lower parking spot with electricity at Camping Sexten (Sexten and Sesto are the name for the same village, it is quite normal to have an Italian and Germanic name for places in these parts). Misurina was our preference because we should get views of the Tre Cime di Lavaredo, the iconic mountains of the Sesto dolomites, but Camping Sexten won after we saw the snow forecast for the next couple of days.

When we woke up at the sosta in Chiusa we knew that snow had fallen higher up the mountain, a light dusting covered the trees on the tops of the nearby hills. We set our sat nav to take us to Brunico to do some shopping and after topping up our cupboards in the biggest Spar I have seen we proceeded to Camping Sexten. As we got closer and higher we could see more snow on the hills, on the trees and eventually on the ground around us. On top of this the snow started to fall gently but persistently. We reached the campsite but managed to overshoot the entrance. Trying to find a spot to turn around we drove onwards with the width of the cleared road narrowing and slowly being covered with a slippery layer of snow. If we didn’t turn around soon we would be beyond the point of no return. We finally found a point where the snow ploughs must have turned and used the minimal extra space to turn around and return to the campsite. 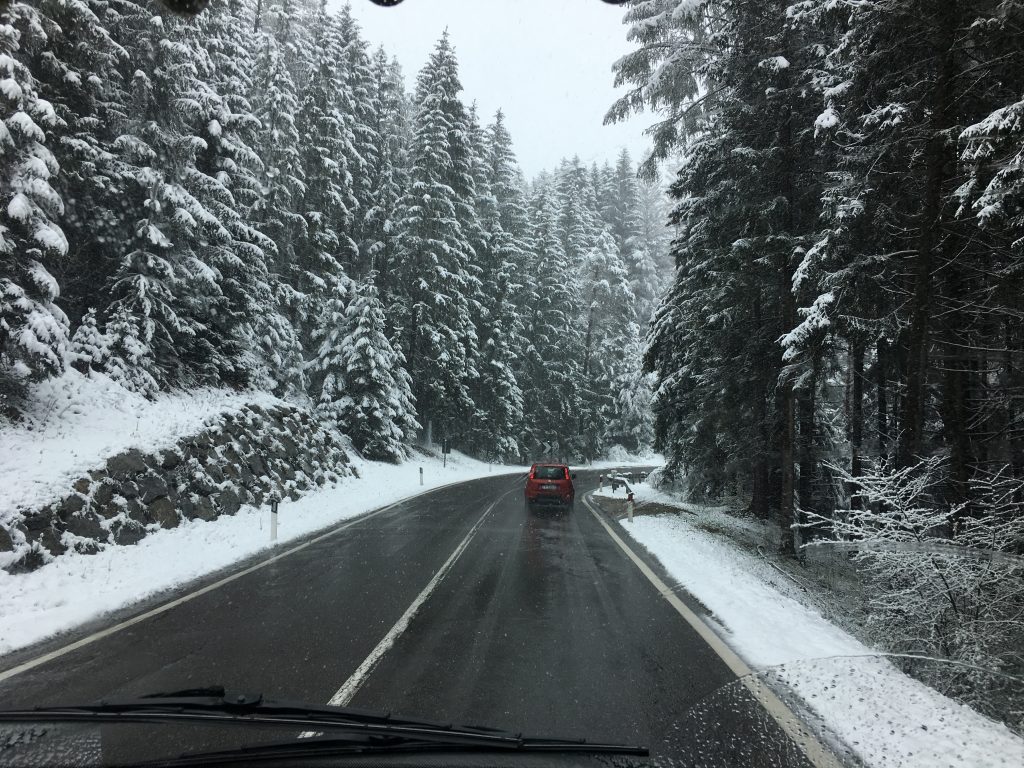 On the way to Camping Sexten, feeling like we were back in a winter wonderland

When I walked into the reception area for the campsite it was more like walking into a five star hotel. Sleek desks with uniformed staff, gentle background music, the scents of the spa and mood lighting all conspired to make me feel rather grubby and scruffy. The staff were as polite as you would expect in a five star hotel, informing me that yes, there was plenty of room for us in their motorhome parking area but they would have to get the maintenance staff to clear a space first as they’d had about 60cm of snow fall overnight.

Camping Sexten has a wide selection of camping pitches, from their standard (comfort) pitch, to pitches with private bathrooms, to one pitch in it’s own compound with garden, deck, sauna and whirlpool and a fence to keep out the prying eyes of the riff raff. We were going for the cheapest option, a spot in the motorhome parking for the eye watering price of €25/night in low season. Unlike many other campsites we were allowed to use the bathroom facilities, even though we were only using their sosta, and what fabulous bathrooms they were. It was a struggle to find them, hidden behind an artfully distressed green wooden door, with no signs to indicate their location. Once found, however, we found it difficult to leave the hot hot water and relaxing ambience. We do love a bargain, but we also loved this campsite. In our previous lives as working, money earning, people this would have been an ideal location for a holiday and I think we would go back again despite the price. Just for a treat you understand, we wouldn’t want to get used to this type of luxury. 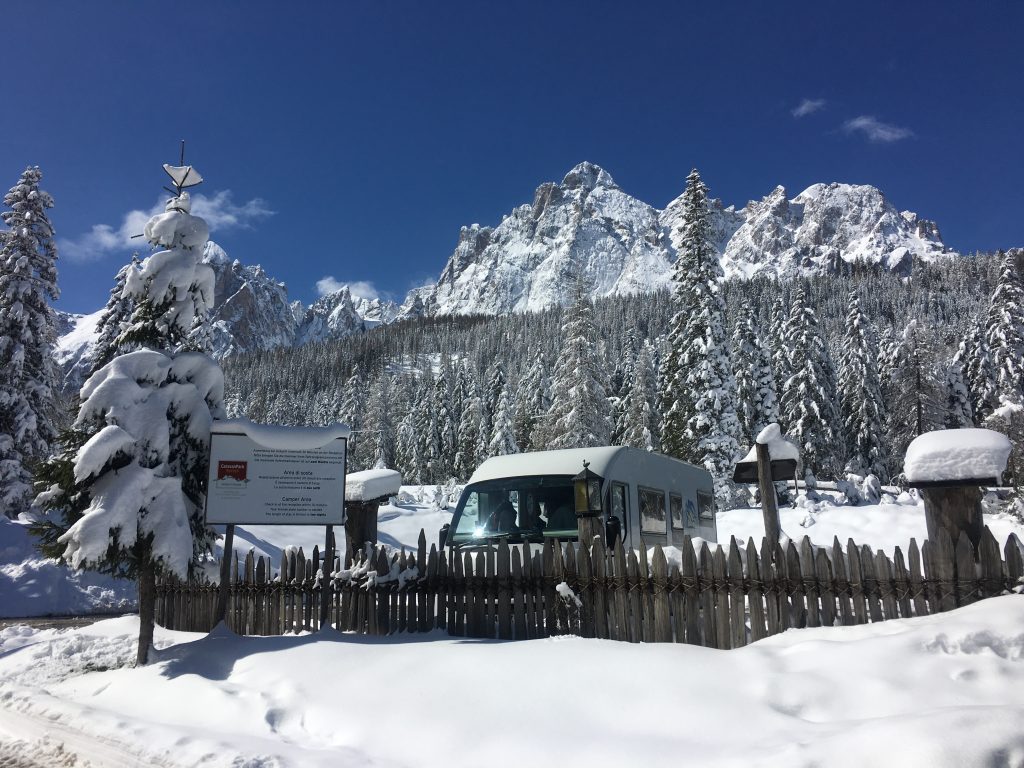 The following morning the sky was a brilliant blue and the views were awesome. There was no way we were wasting such a lovely day so we got our snowshoes out and did a short circuit up the hills behind the campsite. The snow was deep and soft, hard work to walk through even with snowshoes. Sadly snowshoes don’t allow you to float effortlessly on the top of the snow, they still sink and you still have to lift your feet up to clear the snow for your next step. It’s a different style of walking and hard on the hips, so we walked in single file taking it in turns to do the hard work breaking the trail. We followed the path (13A) south east, walking next to the river until we reached the road. A little way along the road we could head up a track (path 131) that had been cleared. It was a relief to take the snowshoes off as we followed the tracks of logging vehicles up through the forest. Snowshoes went back on again as we followed path 130 off the track and downhill, at one point having to take a detour while trees were being felled across the path. That certainly got us moving as we raced to get as far away as possible! It wasn’t a long walk, but it had spectacular views of the mountains. We returned to the campsite with tired muscles ready for another long hot shower. Any excuse. 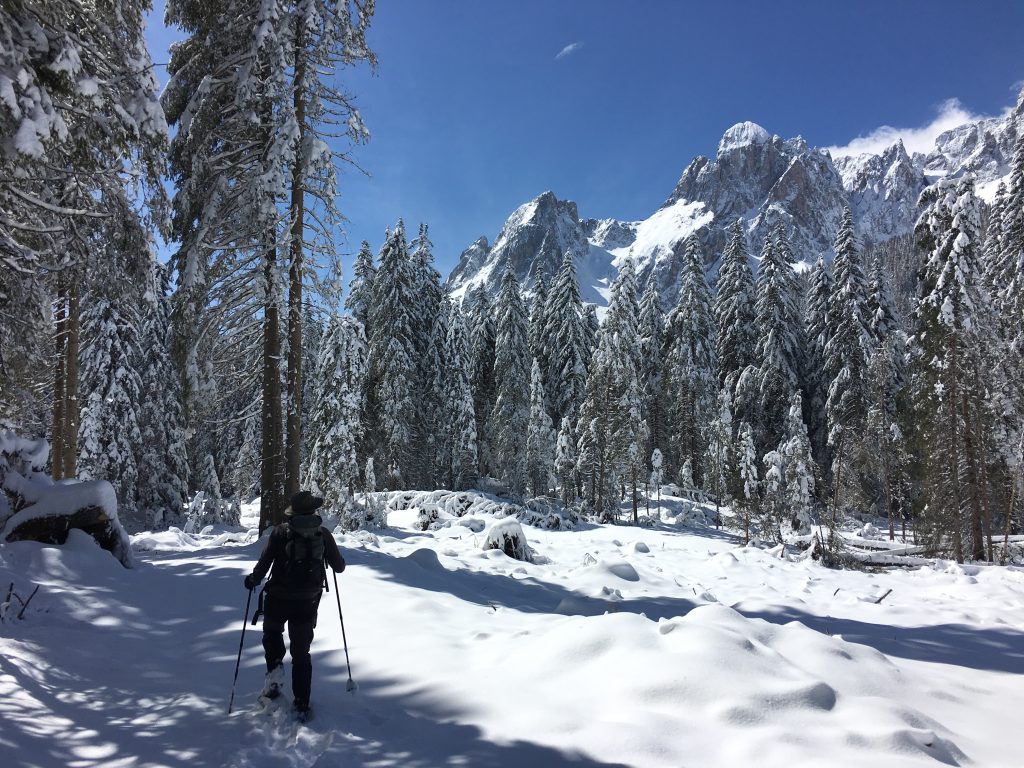 Breaking trail through the forest 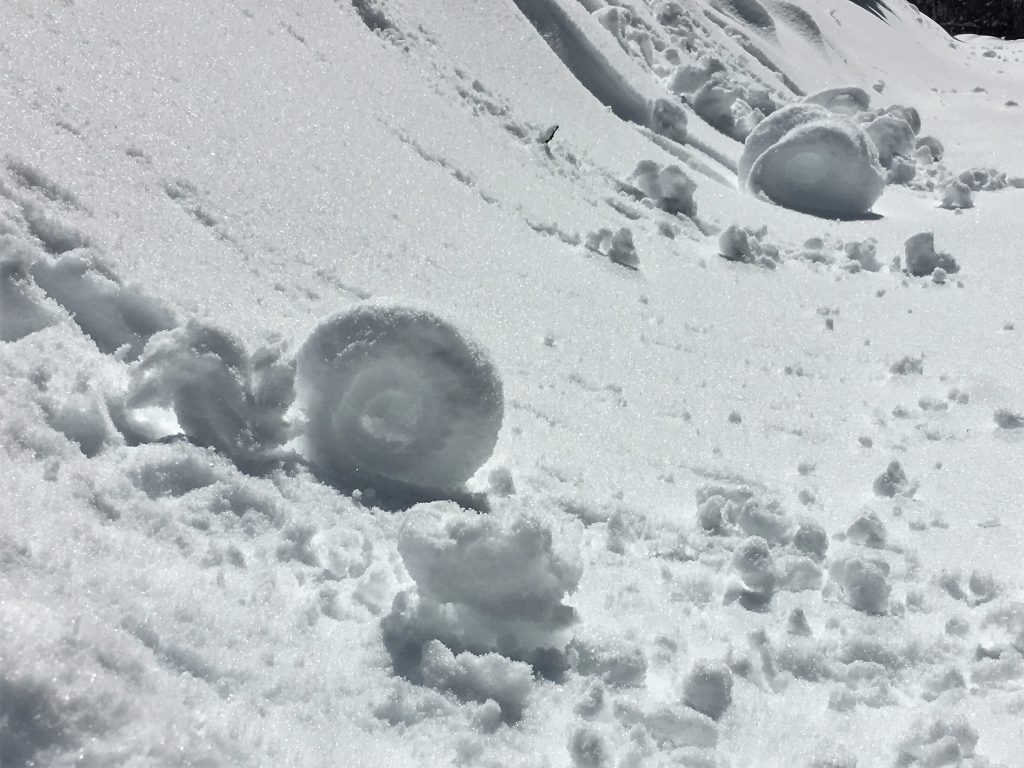 Swirls of snow created when there is a tiny avalanche 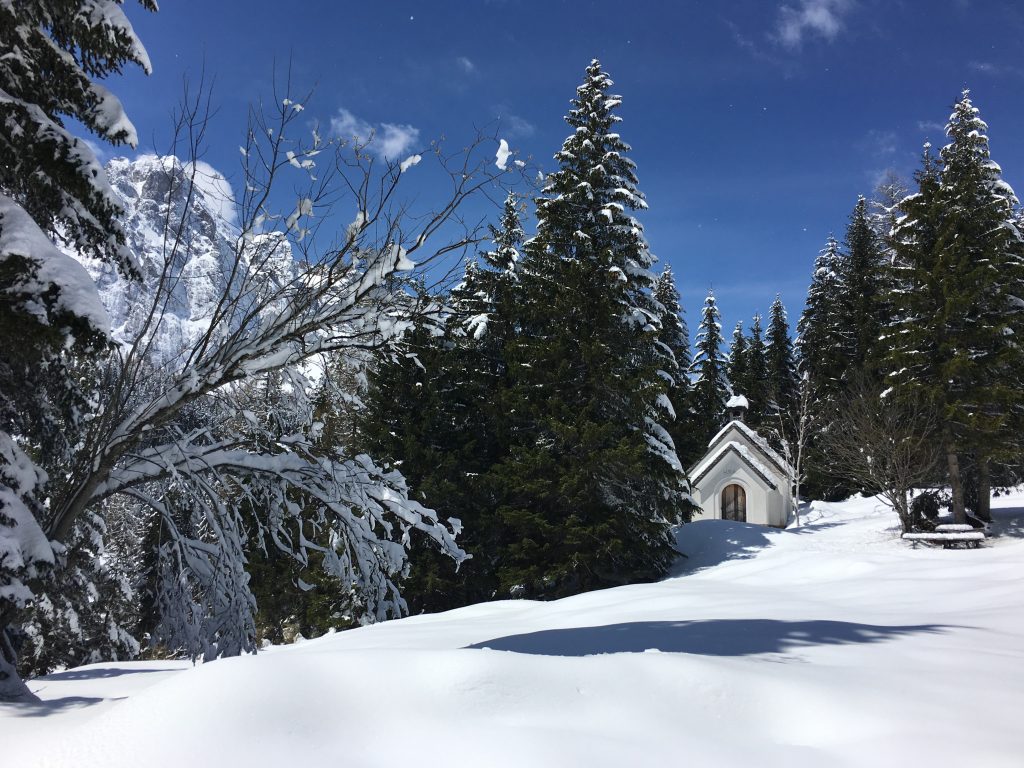 The Chapel of San Michele

The following morning we reluctantly checked out of the campsite and moved back up the valley, we parked up in the large parking area at the bottom of the Val Campo di Dentro (Innerfeldtal). This might have made a nice free parking area but it was full of logs and heavy equipment was being driven in and out, so we decided that we wouldn’t stay overnight. What we would do, though, was a walk up to the Dreischusterhutte mountain hut. It’s both a walk and an easy mountain biking route, so we knew that it would be on tracks rather than narrow paths. We took the snowshoes with us but the start of the path was clear of snow, so for the first 4 kilometres we were able to hike. We did eventually have to put the snowshoes on, and as we ascended the second half of the path we had a couple of sections where the path had been washed away and we had to skirt around the collapsed gravel banks of the river. Luckily someone had followed the route before us to show us the way and break the trail a little. They didn’t have snowshoes though and we felt rather sorry for them as we saw the deep holes they had made in the snow. It must have been hard work. 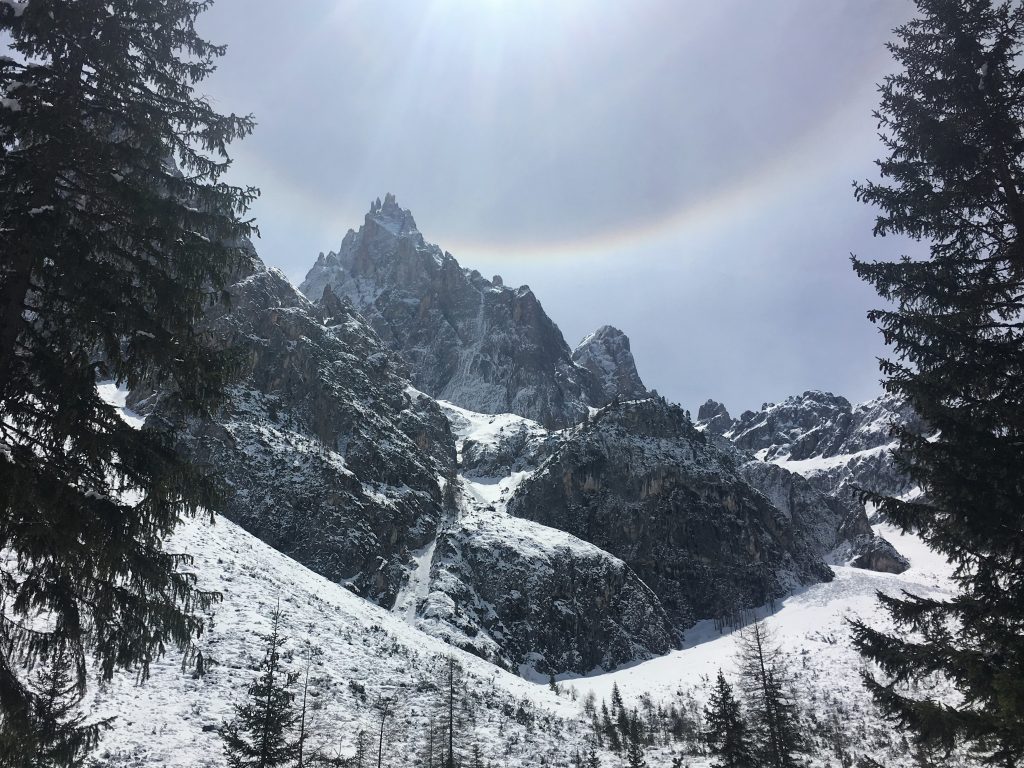 Halo around the sun 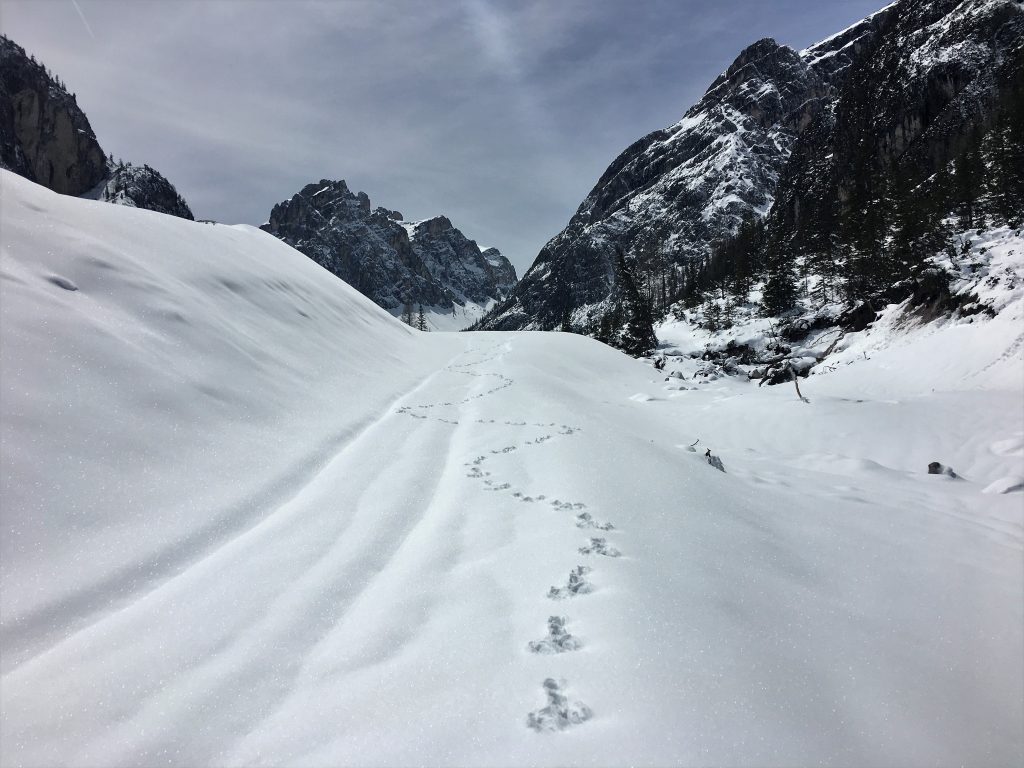 Hare or rabbit prints in the snow 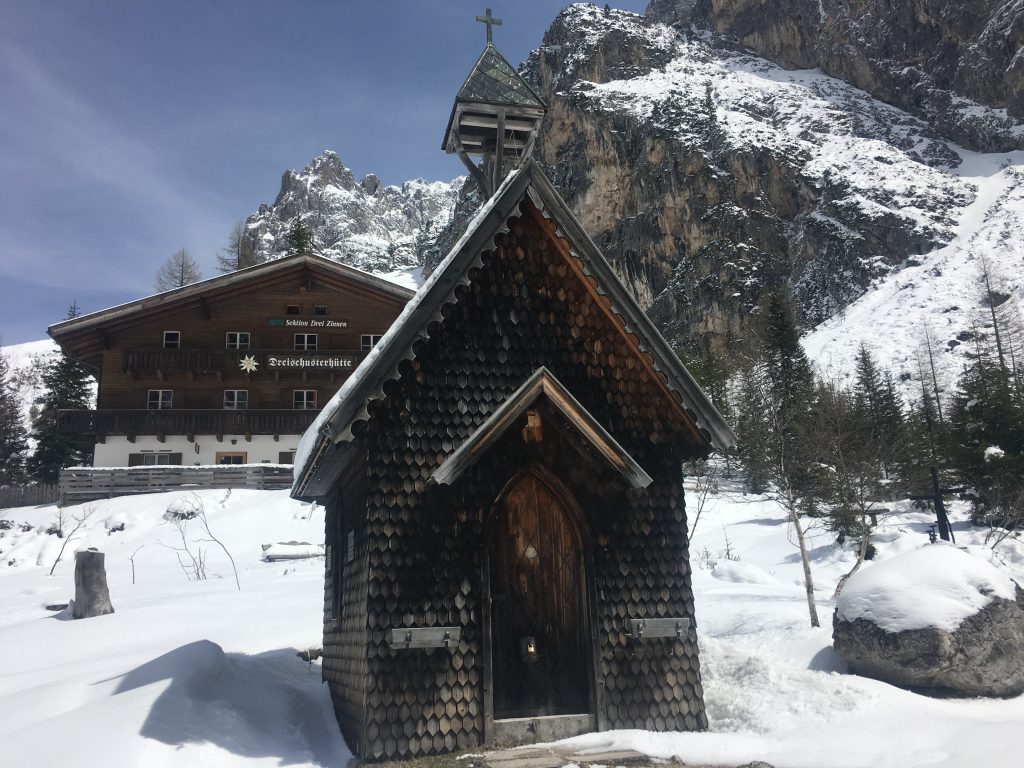 The chapel at the mountain hut

The route was a fairly straight forward up and back again, although we decided to vary it a little by following the asphalt road back down to give our weary legs respite from snowshoeing. In fact if we had known there was an asphalt road almost all the way to the hut (a bus runs in summer leaving people with just an easy couple of kilometres to the hut, or alternatively giving people and option to get deeper into the mountains) we might have chosen to cycle up instead of walking.