After our walk to the Drei Zinnen mountain hut we decided to cross the border into Austria. A brand new country for us, one that neither of us have visited either in our motorhome or at any other time. We were looking forward to it.

Before we ventured onto the roads of Austria we had to do a bit of research. Austrian motorways are toll roads, but not in the way we have been used to. Instead of entering a toll gate, collecting a ticket and paying at the end, you have to register your vehicle. A vehicle less than 3.5 tonnes can buy a vignette that allows the use of the motorways for a given amount of time (10 days, 2 months or a year). Bertie is over 3.5 tonnes though and so the cost and hassle of using the motorways rises considerably. To use the motorways we needed to purchase a Go Box at a cost of five euros. The Go Box sits on your dashboard and counts the miles you have done, it is pre-loaded with money to pay the tolls and woe betide you if you run out of credit (unused credit can be claimed back). To get the Go Box you need to know your emissions class, as the toll is higher for vehicles that produce more emissions. We know Bertie is class IV, but it doesn’t say so on our V5 and so we might be stung for a higher emissions category.

Once we had looked into this we were absolutely convinced we didn’t want to go anywhere near the motorways. The question was whether to buy a Go-Box anyway just in case we ended up on a toll road by mistake (there are hefty fines if you get caught without one). Cue a detailed perusal of the maps of Austria to try and work out whether there were any possible problem areas. There are always options to avoid tolls but sometimes it can involve painful detours. It was then that we also found out Austria has very limited coverage on google street view. Owing to some concerns about privacy Austria banned google from sharing streetview images for a few years, and although it has now relaxed it’s stance google haven’t sent their cars around to many locations yet. We are far from being adventurous travellers, instead we rely on technology to reduce the risks associated with going somewhere new and feel a deep sense of unease when it is taken away.

After realising how dependent we are on technology we felt that we should prove that we can be risk takers (within reason) and as we crossed the border we drove past the building where the Go Box could be purchased without stopping. How very daring! We crossed our fingers and hoped we had made the right decision. 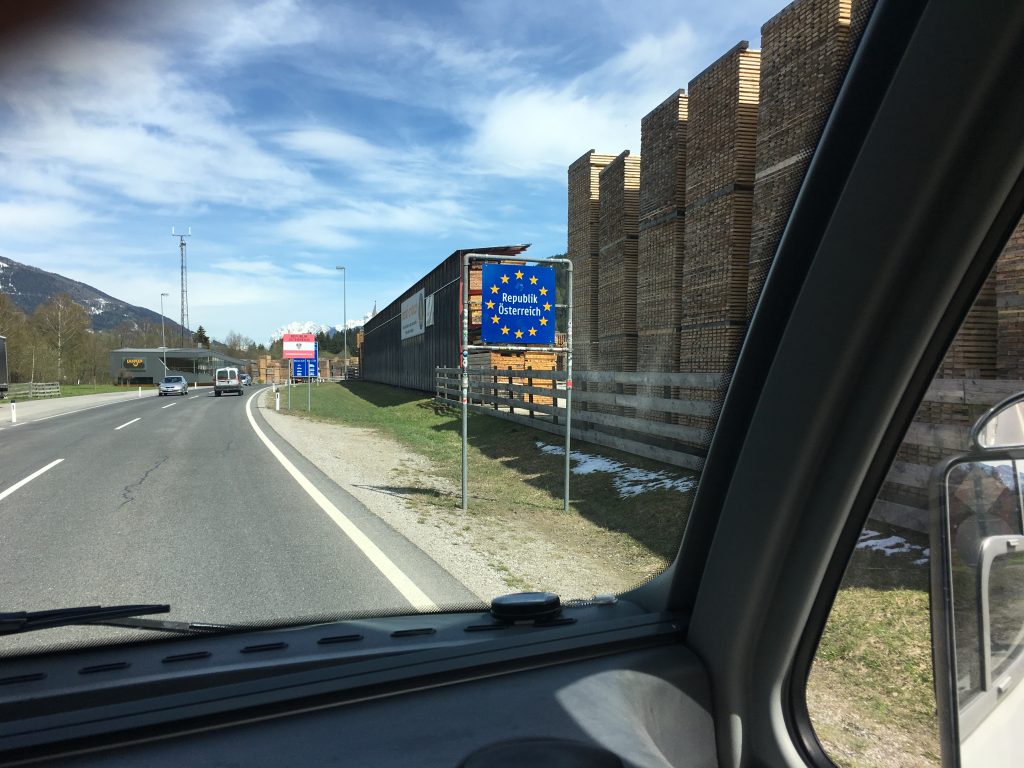 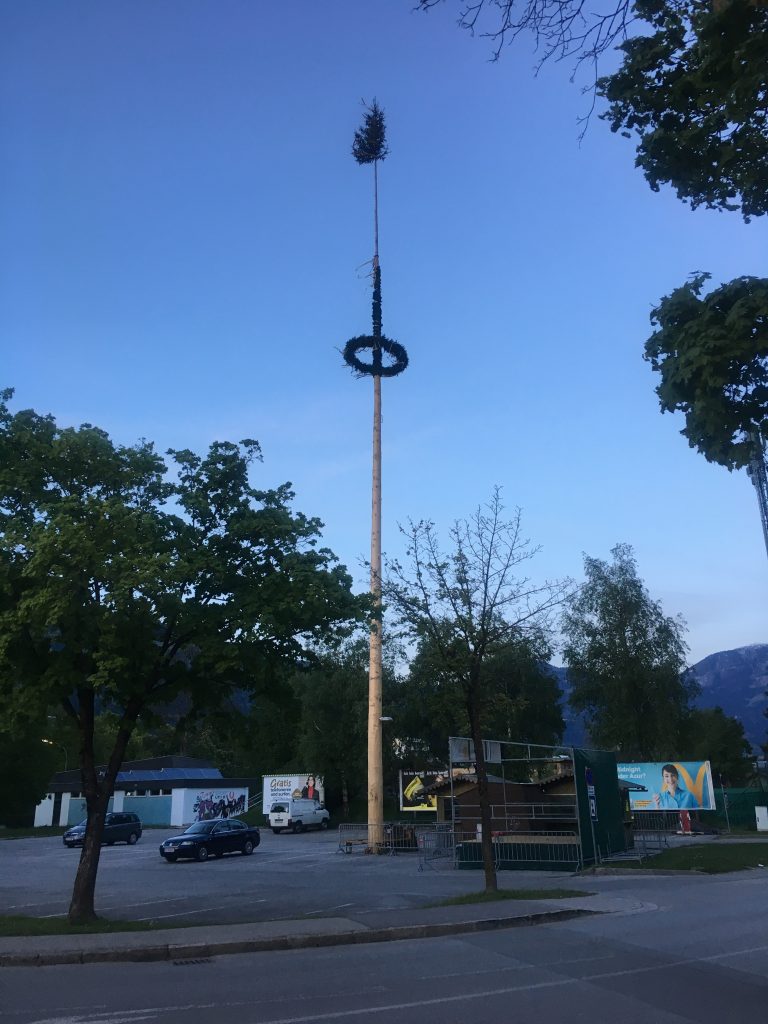 A tall Austrian Maypole – we saw a few of these as we drove to Lienz, I’m not sure if it’s because it was recently May Day or if they stay up all year anyway

Our destination was the city of Lienz. We stopped at a Hofer supermarket (Aldi’s name in Austria) on the way to pick up some bits and pieces before trying out a couple of free parking spots. Neither of them were really big enough for us to feel comfortable and the cheaper ACSI campsite was closed so instead we checked into Camping Falken, another ACSI site but on the highest rate plus tourist tax of 2 euros per person per night. 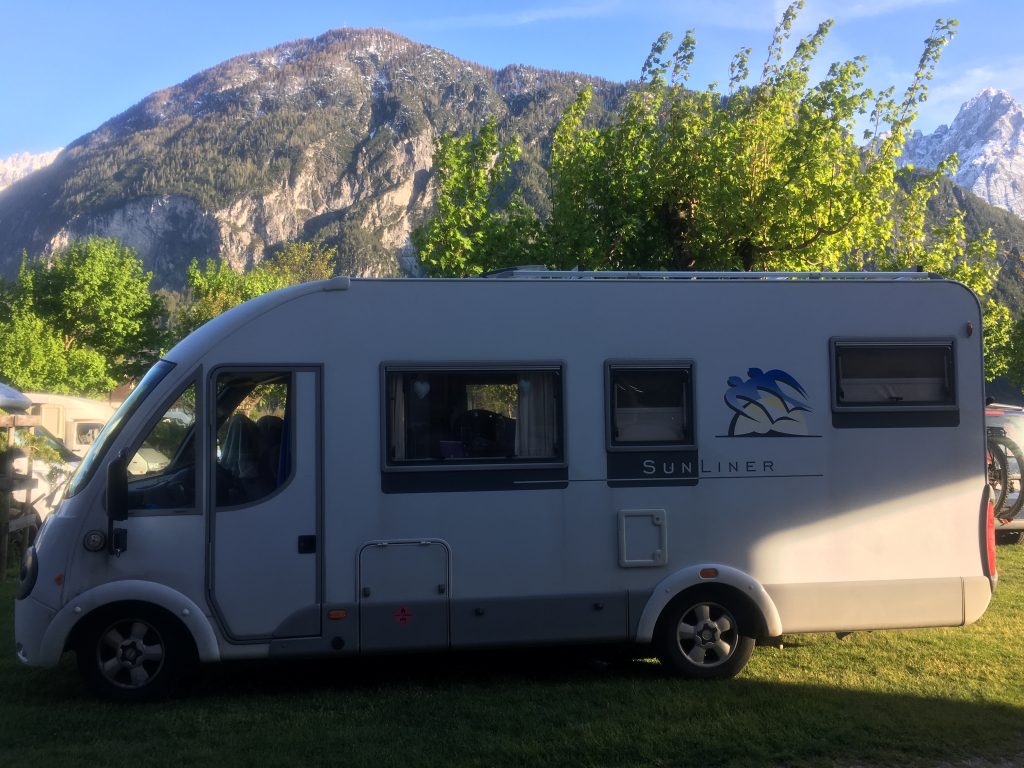 Parked up at Camping Falken

The following day we went mountain biking. This was Paul’s revenge for the two days of snowshoeing which had left him with aching muscles. He knows that I find cycling much harder work and wanted me to suffer too. The riverside cycle route is lovely, connecting Austrian cycle routes with the cycle routes in the Italian Tyrol it offers opportunities for relaxing cycle touring. 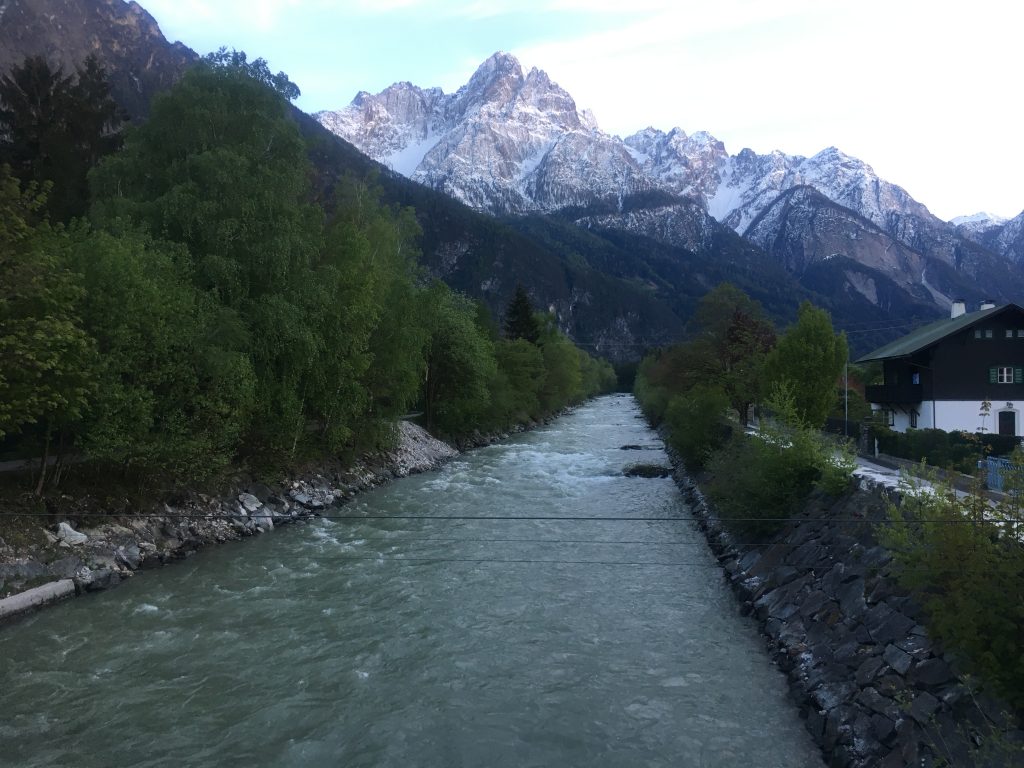 Cycling alongside the river

After 5km of gentle flat riding the uphill was a bit of a shock. We couldn’t go uphill on the intended route next to the Galitzenklamm gorge because there was a lot of maintenance work going on, but we could take the next turn up a narrow forest road towards the Klammbrückl parking space. 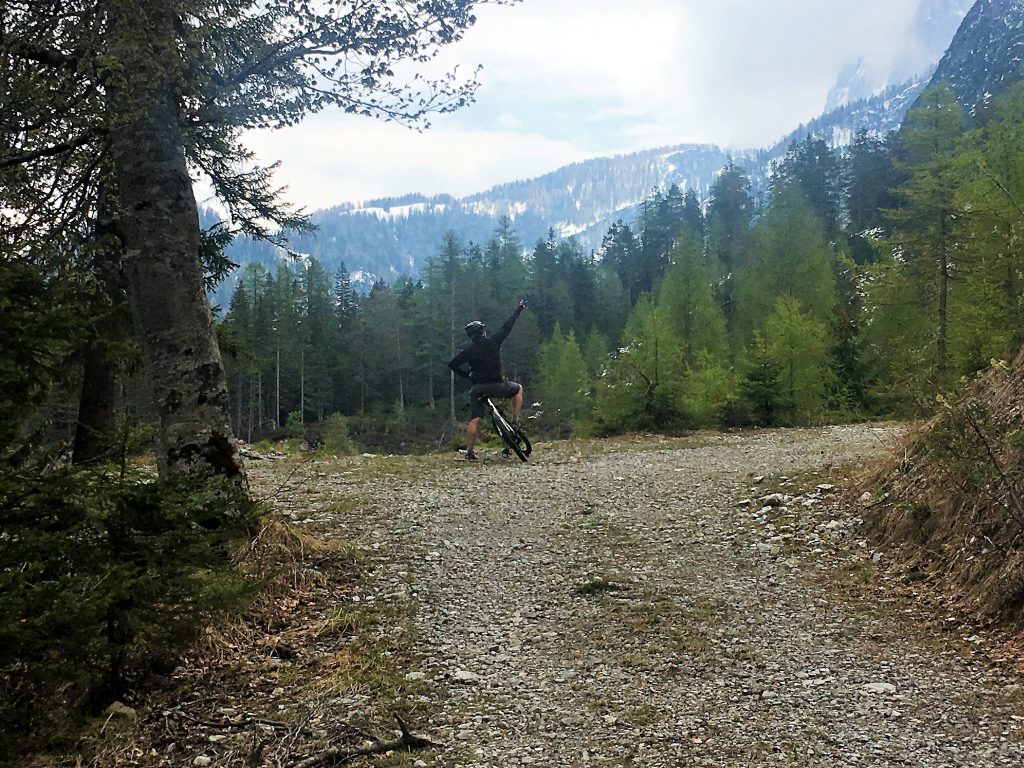 I caught Paul doing disco moves on the mountain

This allowed us to follow what looked like a loop on the map. We followed the south side of the loop first of all, painfully (for me anyway) gaining height on a road that was obviously not much frequented and had broken up in places. We discovered why it was in such poor repair as we turned a corner and came to a huge landslide. We had two choices, continue the loop by crossing the snow covered landslip, or turn back and go the way we had come. Paul checked out the way across, reporting that it would be ok and he carried his bike across while I slowly pushed mine over the snow. It was tricky getting over the shrubby vegetation and back down to the road and we needed a rest afterwards to allow the hammering of our hearts to calm down. 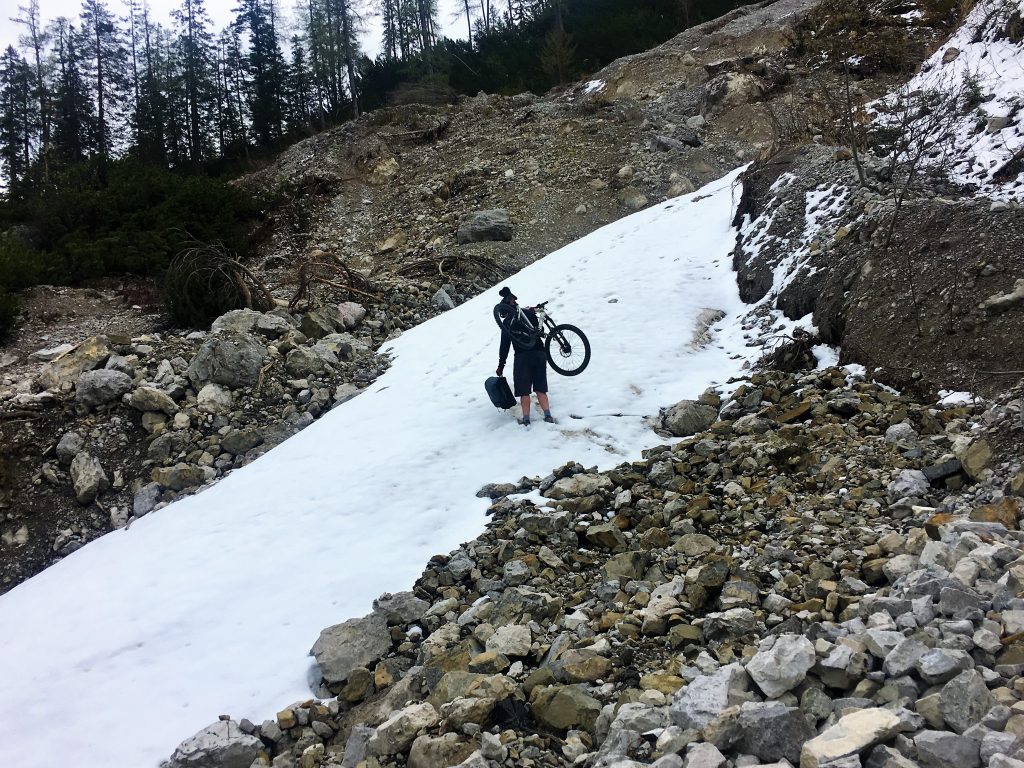 Once over the landslip we were going mostly downhill on the other side of the loop with just a short uphill spur off to the car park that we decided was our furthest point. From there we could allow ourselves the luxury of  a swift and fun downhill ride. What had taken us two and a half hours to ascent took only 45 minutes on the descent. 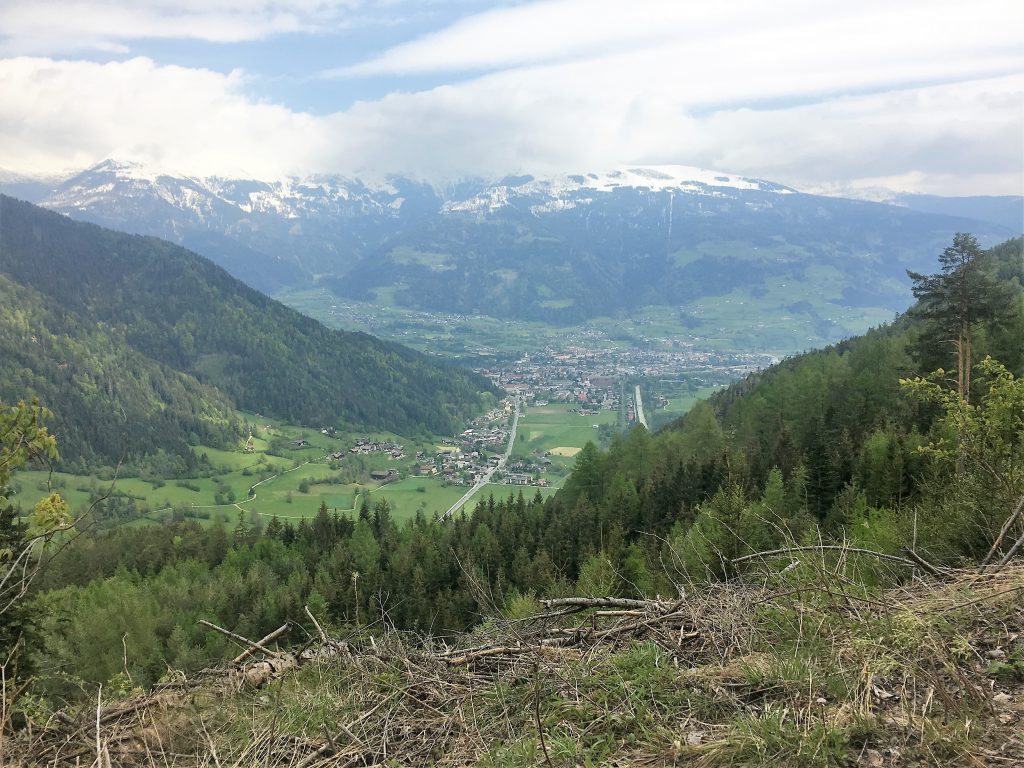 Views down towards Lienz

Cycling to the Klammbrükl Carpark