We were packing up and making ready to leave the campsite in Lienz. We had a route planned through Austria, taking maybe a week to take in the Krimml waterfalls, Mayrhofen, Hall in Tirol and Innsbruck. It looked like a nice route without an risk of accidentally slipping onto a toll road. But it was not to be.

As Paul was putting the bikes back on Bertie he thought he would do a quick check. We do this every so often, checking that the tyres are ok and all the lights are working. A while ago he had noticed that we had some abnormal wear on one of the rear tyres, so had done a swap. We had kept an eye on both tyres and the wear had been minimal, making us confident that we would manage to make us last the remainder of our planned time before returning to the UK. But this time when he checked the tyres (needing a torch and a lie down under the van, as it was on the inside edge) the wear was far more significant. Something had happened in the last couple of weeks to exacerbate the problem and we were presented with a more significant issue.

A phone call to our garage at home  gave us the bad news we expected. Obviously they couldn’t diagnose the issue there and then, but the worst case scenario was a problem with our ALKO chassis rear axle. Worst case because it’s expensive to fix and can take a long time to get replacement parts.

We had a long chat about the possibilities, we could get a local garage to look at it, but if it was the rear axle then it could take 4-6 weeks to get a replacement and we would be stuck in one place for that amount of time. Not that we didn’t like Austria, but given we were going to be returning to the UK in a month anyway we decided the best course of action was just to get back to our usual garage and have them do the work. With any luck the it wouldn’t impact our plans for the summer, and if it did impact our plans we would be somewhere where we could spend time with family and friends.

So our plans suddenly changed and we were on the shortest and fastest route home.

This is how we came to travel through 6 countries in 48 hours.

We struck north through Austria, avoiding the toll roads but having to use the Felbertauern tunnel (unavoidable, we think, on this road) which has a charge of €11, completely separate to the toll system. As we drove we talked about how nice the country looked even under cloudy skies. The green valleys, ornate Austrian buildings and glorious mountains were made even more beautiful by the denied pleasure of visiting them. Before we left Austria we filled up at one of their good value fuel stations as we weren’t sure whether Germany would be any cheaper.

We left Austria and immediately joined the motorway in Germany.  Germany’s motorways are free, giving us an opportunity to move swiftly through the country. It’s not our favourite mode of travel as the surroundings are usually pretty dull and monotonous, but it doesn’t half eat up the miles. We stopped for our overnight break at the free stellplatz in Ettlingen. This busy and popular parking spot has services, including water for a fee, but there was no need for us to top up. We squeezed into one of the remaining spaces and had a wander; a pleasant stroll through the compact eighteenth century old town which runs alongside the river. We were relieved to stretch our legs after being stuck in our seats for most of the day. 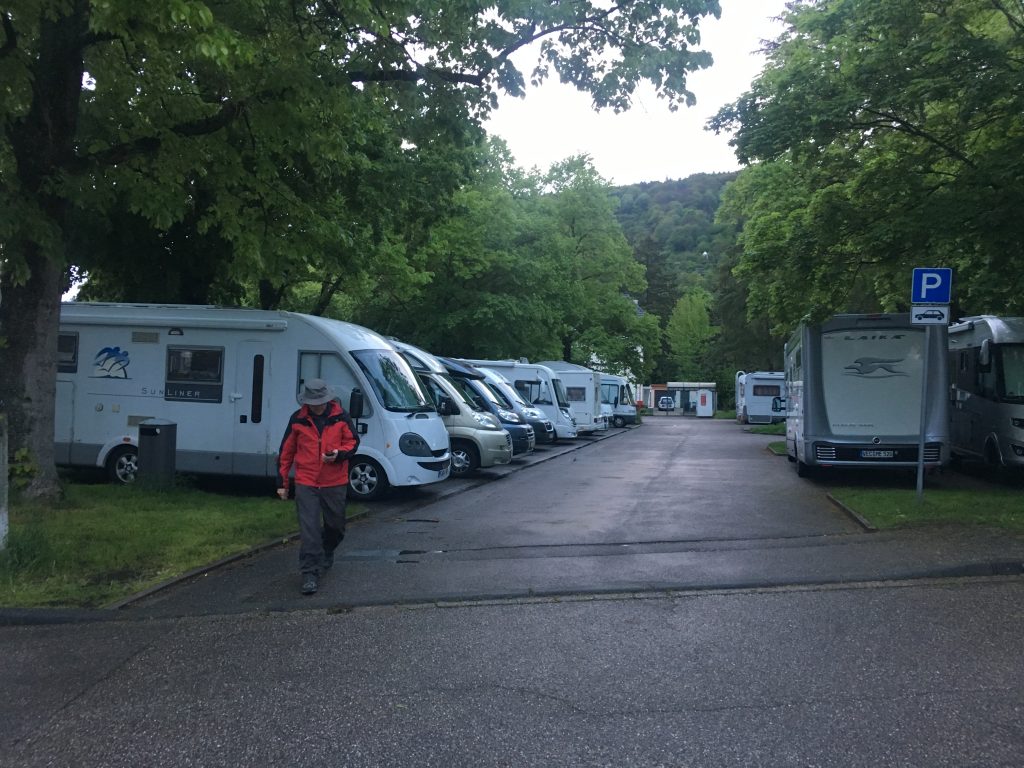 The busy stellplatz in Ettlingen 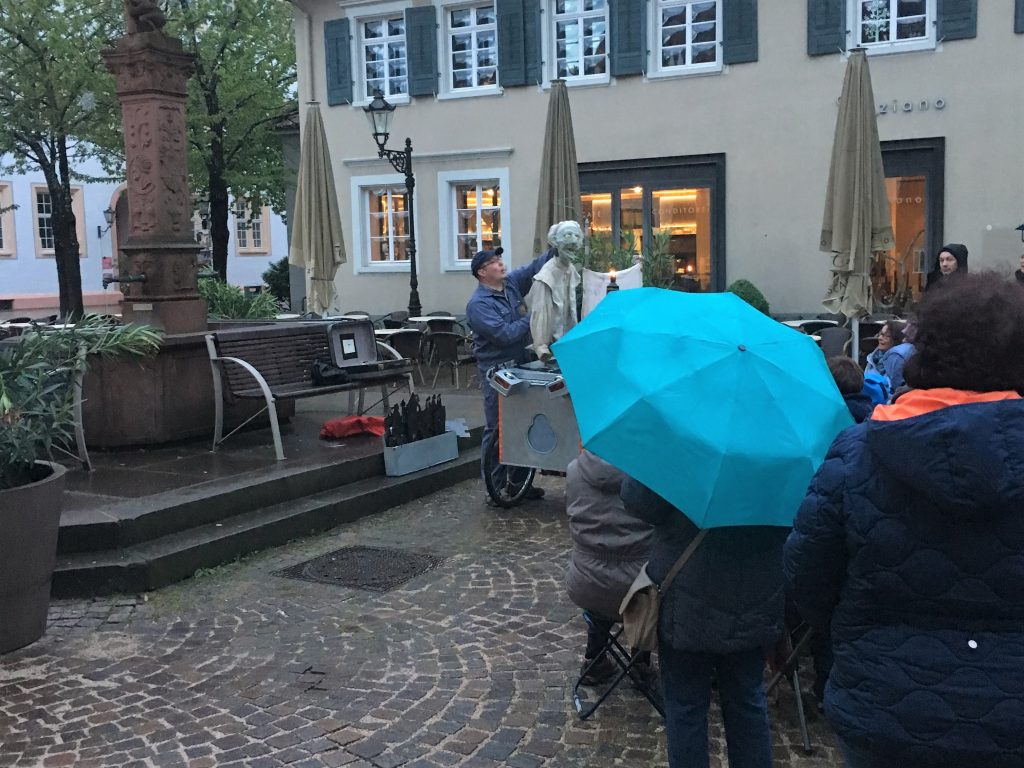 This puppeteer was obviously very funny, but my rudimentary German wasn’t good enough to translate the humour 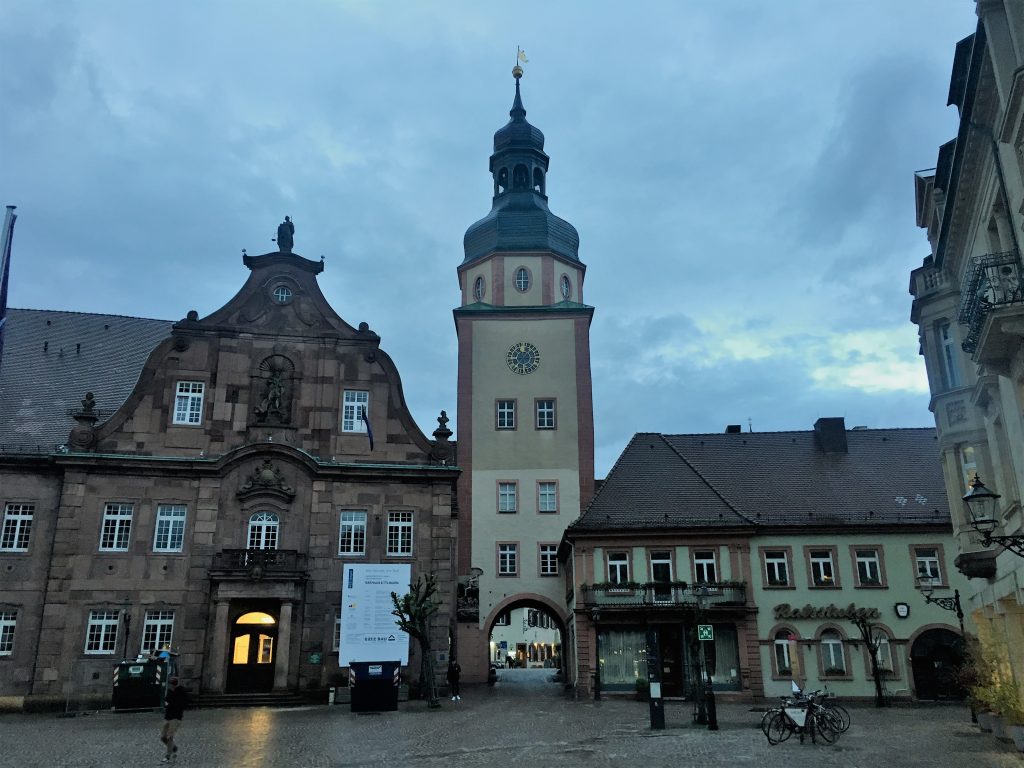 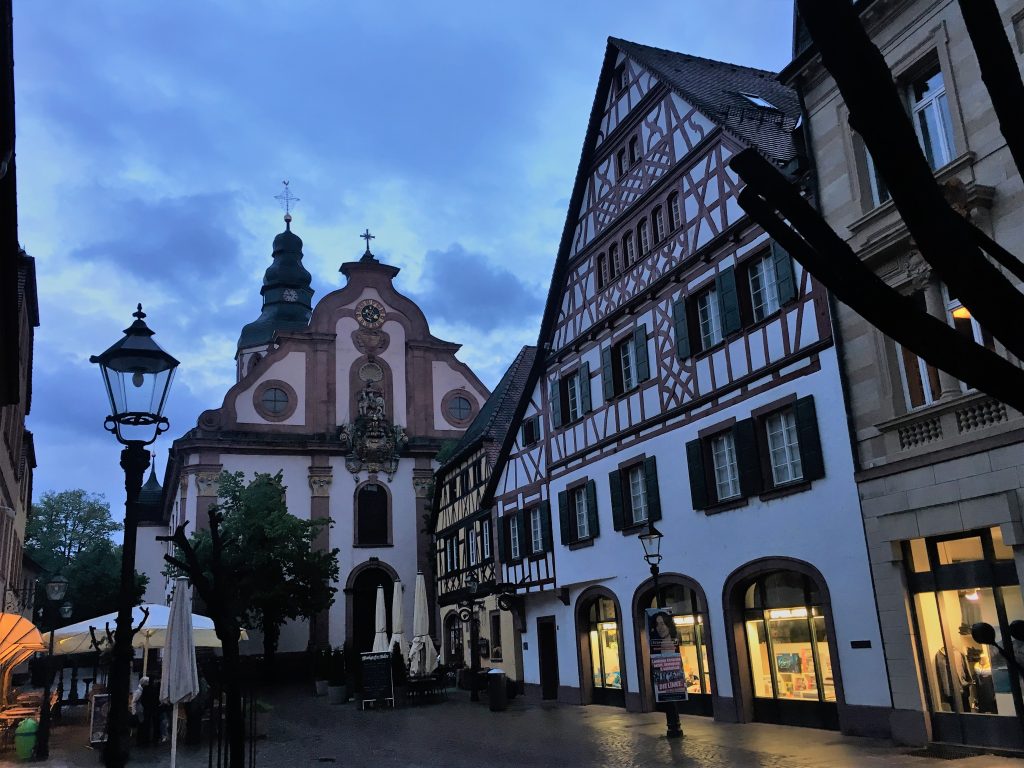 The following morning we continued through Germany and into Luxembourg, making our nearly empty tank of fuel work hard enough to get us over the border to the extremely cheap fuel stations of the ‘Grand Duchy’. We stayed on motorways all the way, There is no advantage to leaving the motorway for fuel as it is the same price everywhere. Luxembourg remains one of those places we have only used for transit and cheap fuel, we must stop and check it out one day.

From Luxembourg we had a brief foray through Belgium before we dropped into France. We stopped in Bergues for the night, a parking spot we’ve used before, and I booked us onto the ferry for the following morning.

A bright and early start got us on an earlier ferry that I’d booked and we were off, back to the UK and our sixth country. It wasn’t long before we were back in Somerset. I don’t think we’ve ever covered so much distance in such a short space of time and in such an effortless way. It’s not how we would normally choose to travel, but at the same time we’ve shown we can do it (at the expense of numb bums), so for more distant trips in the future we can make a speedy start.