With a couple of unsuccessful mountain excursions under our belts we thought it was time to take a new approach and visit somewhere a little busier and more popular in the hopes that roads and routes would be open. Our target this time was Molveno, a popular village at the head of Lake Molveno. A quick email to the tourist office confirmed that the motorhome parking, the lower altitude footpaths and some MTB routes were open. Even the gondola was running on a spring schedule.

The motorhome parking was expensive, with a €9 cost for the first 12 hours and then an hourly rate of €0.8 per hour (with prices rising on the first of May). So our strategy was to park down at the bottom of the valley the night before and then head up to Molveno in the morning. Ponte Arche was where we chose to park, a nice grassy space on a former football pitch with spacious marked out pitches and services for €5 per night. Finding out how to pay was slightly more tricky. The police no longer collect payment and the preferred approach is for people to make an online payment through their bank. Payment can be made at a local office, but in the mornings only. In the end I’m sorry to say that we didn’t pay.

The following morning we were up bright and early to make our way along the roads to Molveno, occasionally needing to squeeze in to let other vehicles through. We continued to debate whether the cost of the parking would be worth it and as we approached the lake we could see occasional possibilities for free parking along the lakeside. However this would limit our leisure options so we decided to continue on towards the paid motorhome parking area that nestles in the valley below the spectacular Brenta dolomites and just on the outskirts of the village. 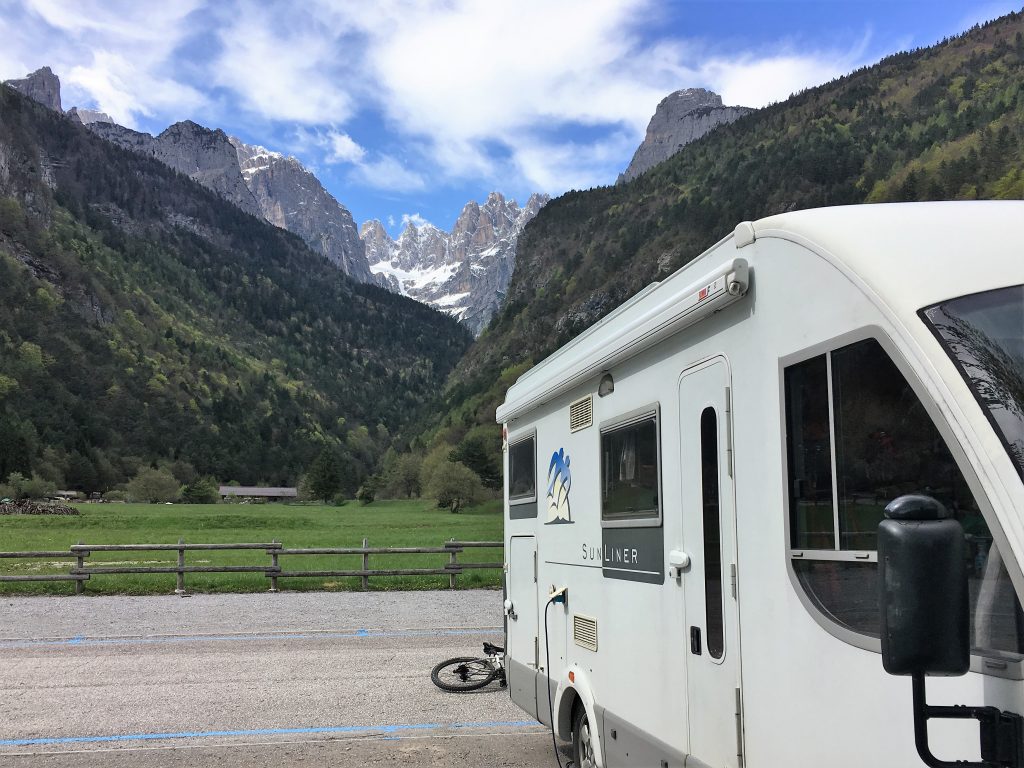 Our parking in Molveno, pricey but beautiful views

After getting parked up we wandered into the cobbled streets of the village to the tourist office, picking up some route maps and getting some updates on the open paths. We were tempted to get the cable car, but the lady in the tourist office warned us that most of the higher walking and biking routes would be closed, so we decided against it and instead opted for a mountain biking figure of eight loop from the ebike pamphlet (we don’t have ebikes) up to the nearby village and ski resort of Andalo and then back down and around the lake.

The route started in the village and was poorly signposted at first until we got to the cable car. Then we found the signs pointing along Via Belvedere that soon took us off the road and onto a track through the forest next to the river. Our hearts sank as we encountered a sign saying the track was closed – we’d been assured that the route was open – but we carried on regardless and can only imagine someone had forgotten to remove it. The track took us quickly to the outskirts of Andalo where we were back on the road again as we made our way through the village. It was the first proper mountain biking I had done for quite a while and as we slogged our way up from Andalo to the ski area I was contemplating the option of an electric bike. I added another reason to the list as we went past the sign warning of bears. I was so out of puff that any bear would find me an easy meal. If I had an electric bike surely I would be better able to make my escape. 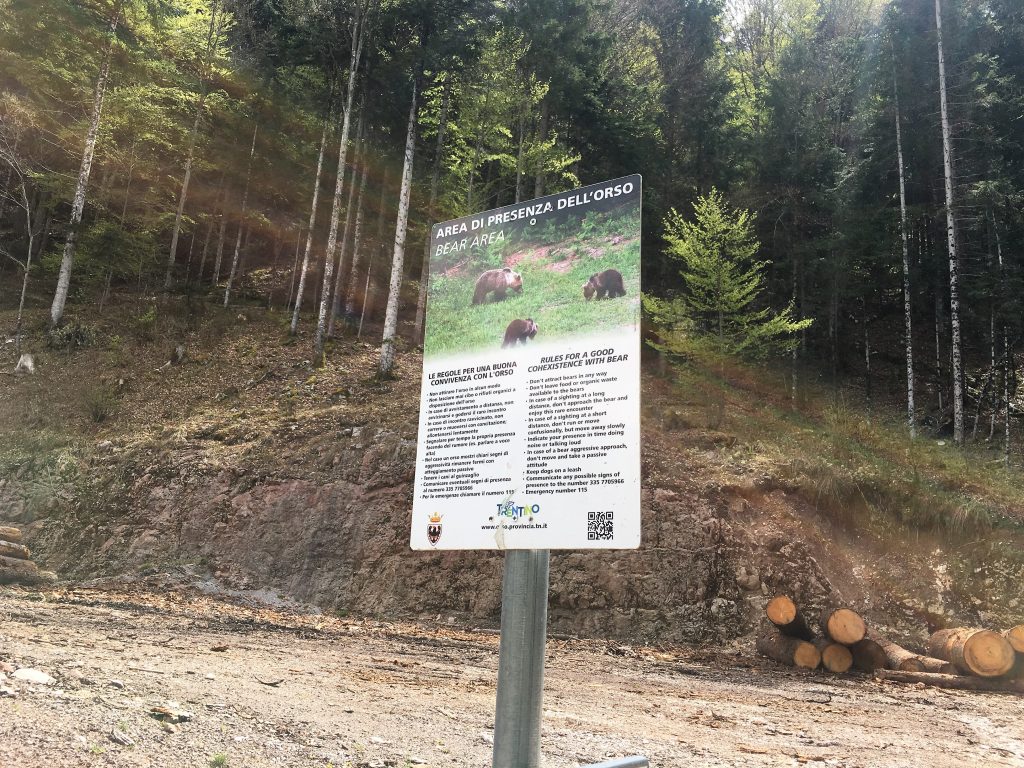 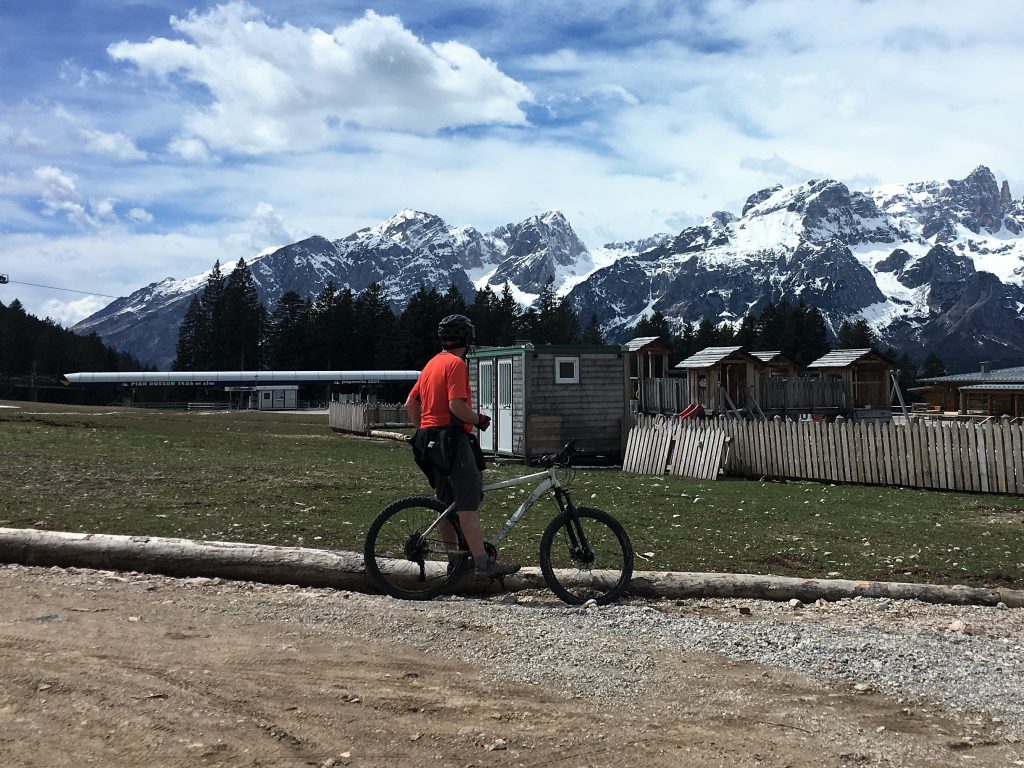 At our highest point on Andalo’s ski area

As always with a cycle trip the uphill was soon forgotten with the exhilaration of bouncy undulations and easy downhill through the forest. So much so that although we gave ourselves permission to finish the bike ride on the return to Molveno we opted to do the lakeside loop anyway. This was much easier, a pleasant path with minor undulations around the beautiful blue lake. 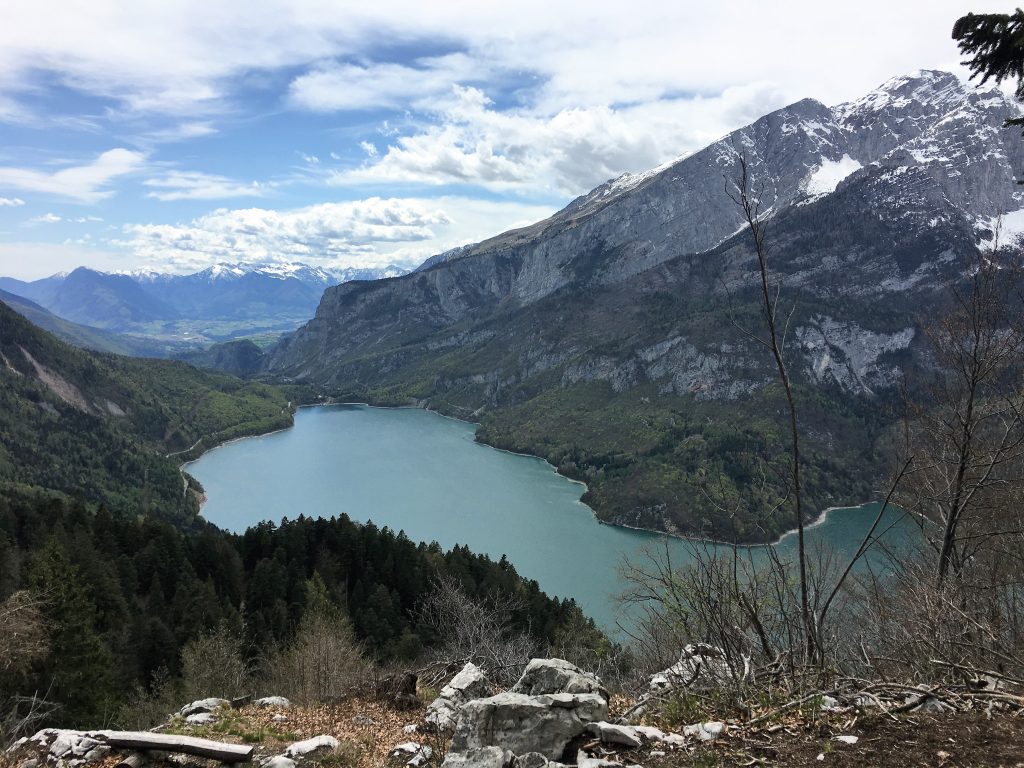 View of Molveno lake from our cycle route 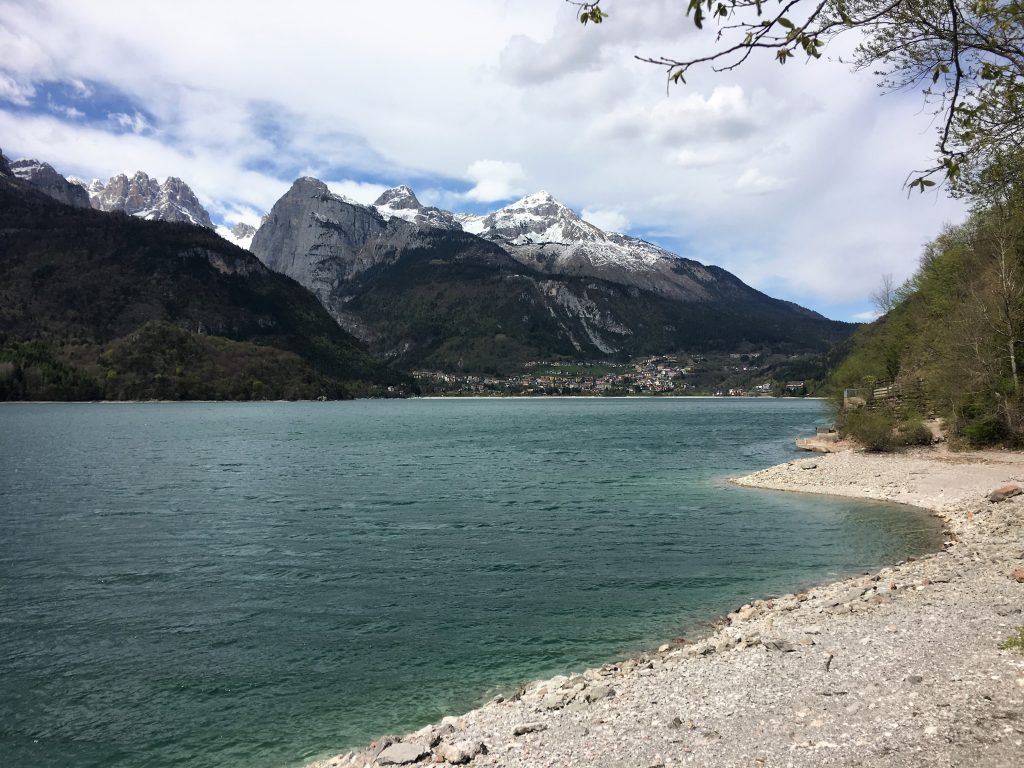 We got back to Molveno tired, but happy we had managed a decent bike ride. The hot sun made ice cream a necessity and luckily the village was busy enough that cafes were open for business.

The day had been a success and the forecast was for sun and warmth so we decided to stay overnight in Molveno regardless of the cost. Despite having heavy legs we planned a walk the following day, if we woke up with too many aches and pains we could always have a tourist trip on the gondola instead. There was no need for the contingency plans as we were reasonably fit and enthusiastic the following day. We took a steep path that rose through the forested hills to the pastures and refuge of Malga Andalo. 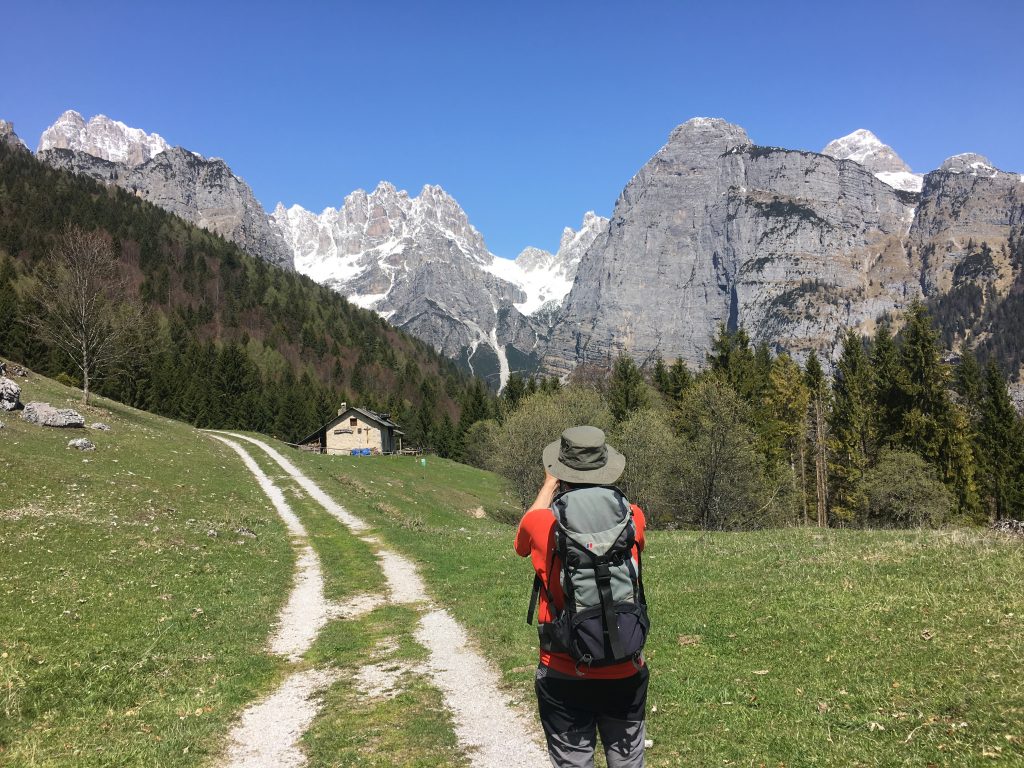 Malga Andalo with the magnificent Brenta Dolomites in the background

We encountered our first fallen trees across the path just below the refuge and had to take a detour through the woods, this set the tone for much of the rest of the walk, once we had strolled south and west through the pasture we were back in the forest again, and back amongst the collapsed trees. As often in these situations we chose different routes, each suited to our personal preferences for getting past obstacles. Paul chose to tight rope walk the trunks, whereas I preferred to climb up the banks and above the upturned roots. We met one other couple walking in the opposite direction through this obstacle course who warned us that there were more problems to come. So instead of following the path we decided to strike a path through the forest, using the compass and map to try and meet one of the downhill paths. This proved to be a good decision, once we’d found the path (involving a lot of stopping and checking of our bearing) we managed to proceed downhill without having to vault over any more trees. 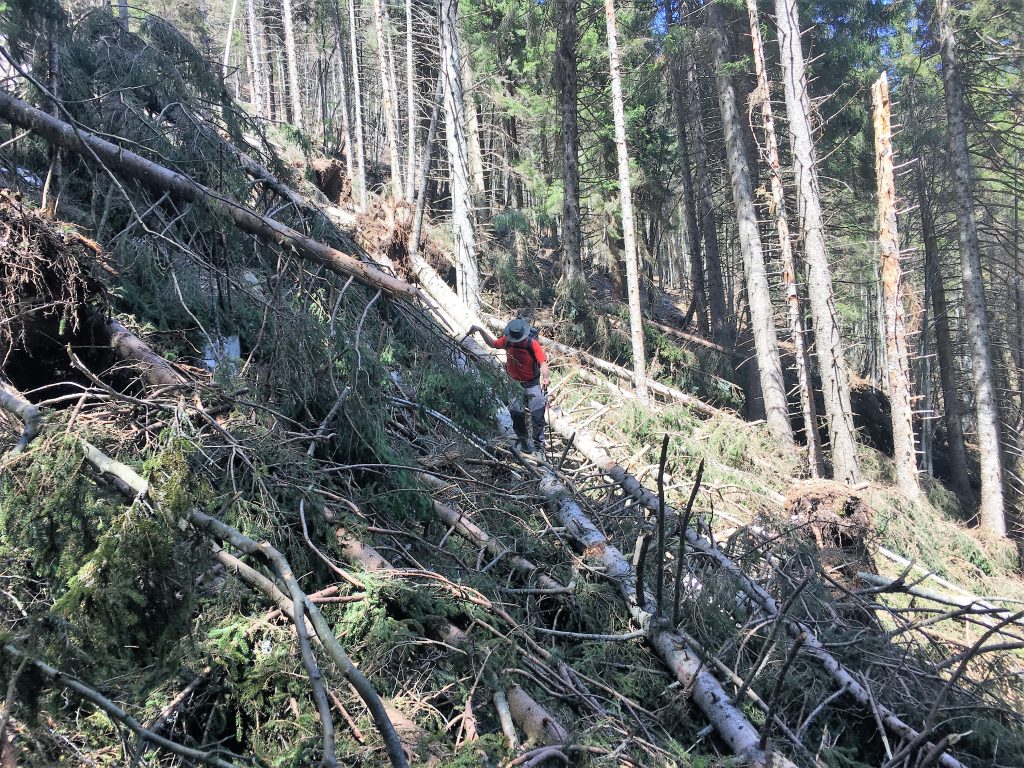 Paul balancing on the tree trunks

With a couple of successful days under our belt we moved back down to the parking at Ponte Arche. The warm sunshine was even more glorious down at this lower altitude and we were able to get our chairs out and do a bit of sunbathing under the rays of the afternoon sun.