The Verdon Gorge is, of course, the main event in this area. We had walked at one end of the gorge, where the river debouches into the Lac du Sainte Croix, and we had cycled round the other end where the river spills out of the dam across the Lac de Chaudanne. We have driven along it’s northern edge on the D952 (it is possible to drive along the other edge too to do a full circuit) and last year we had even cycled above the centre of the gorge on the Route des Cretes, a fantastically scenic narrow road. But we hadn’t yet been down in the gorge itself.

This was to change with a walk along the Sentier Blanc-Martel, a famous footpath in the gorge established by the Touring Club of France and named in honour of two people; Alfred Martel, a keen and well-known speleologist (caver) who explored the gorge in the early 20th century and Isidore Blanc, a local school teacher and Martel’s guide. 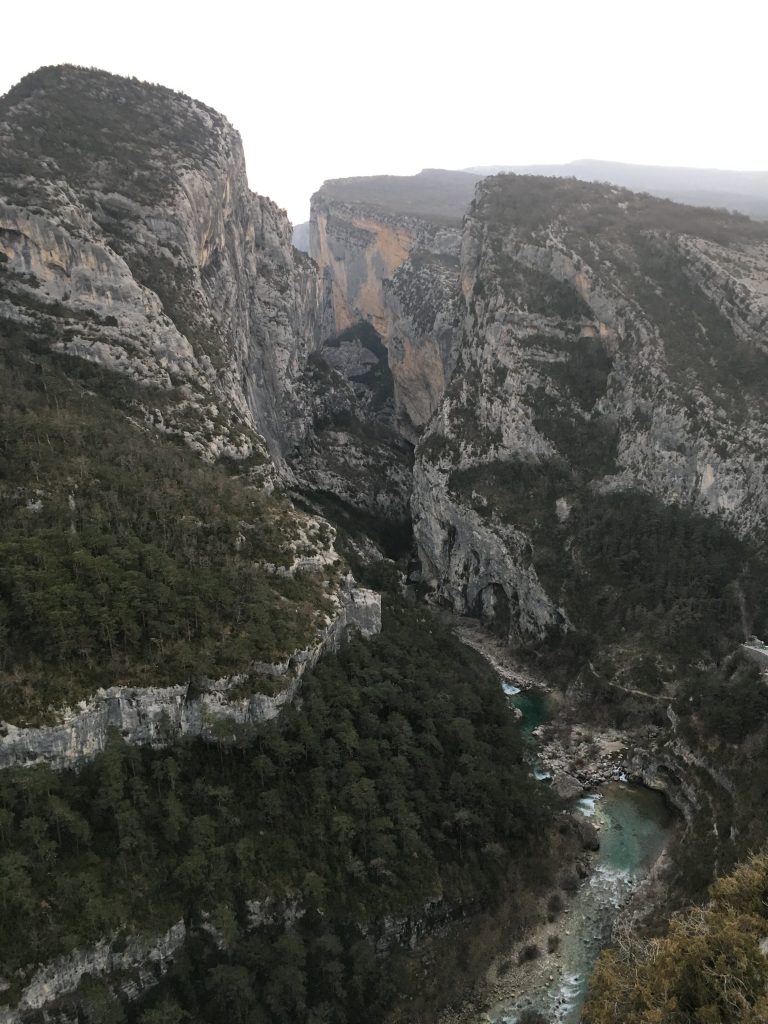 View from the Point Sublime platform

If you are in the area in high season it is usual to walk the trail from the Chalet de la Maline to the Point Sublime. Buses (timetables can be found here) run to take you to the Chalet de la Maline from your campsite or parking spot, and walking in the recommended direction eases the flow of traffic along the sometimes narrow trail, especially at the long stairs (252 of them). At this time of year the buses were not running, and strictly speaking the Route des Cretes (the road to the Chalet de la Maline) is closed due to risk of snow and ice.

Because we were walking out of season we decided to start at the Point Sublime, where we knew we could get parked easily, and walk as far as we could along the route, and then turn back and retrace our steps. We were too tight to shell out for a taxi. Having done this I can certainly recommend the usual direction, the views are much better and the sun is not directly in your eyes. 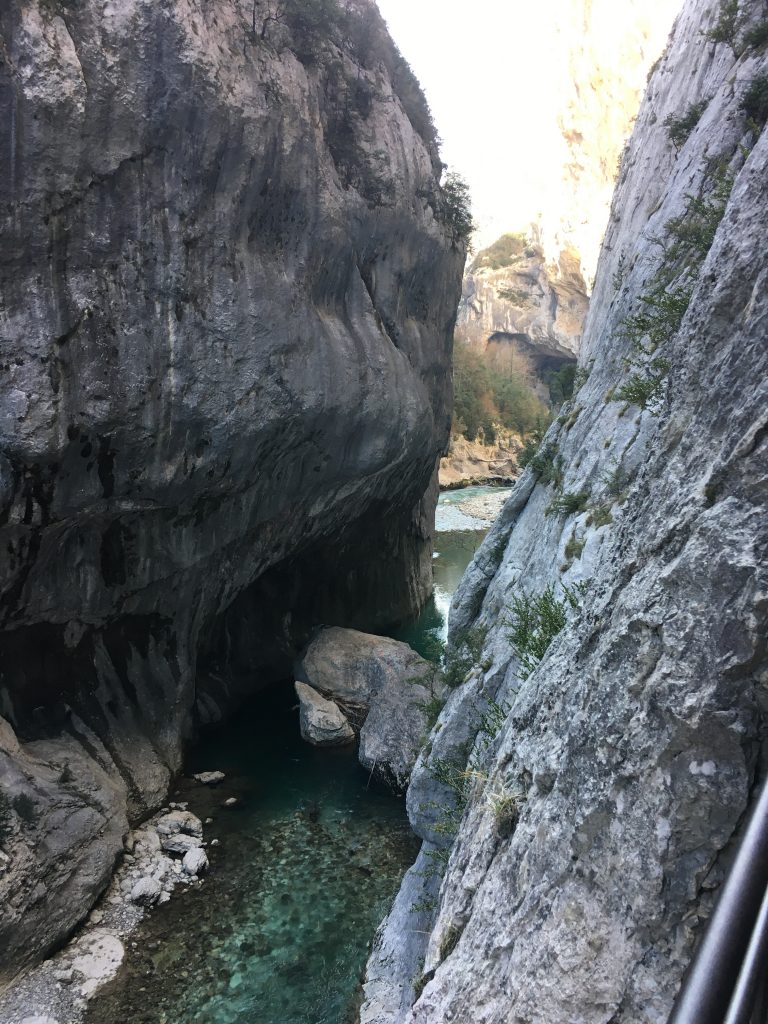 Narrow section of the gorge

The route from Point Sublime takes you back on the road in the direction of Castellane for a short while before heading off, following the yellow signpost to the Sentier Blanc-Martel. Note that this is also the GR4 path, as the signposting is not consistent.

The path then heads downhill and under the cliffs to the Saut de Baou, where you can go under a rock arch to see the small gorge and tributary to the Verdon. However the onward route turns left just before the rock arch, maybe it’s because it’s not the usual direction of travel, or maybe it was just us being stupid, but this turning was not very obvious.

The path then crosses the end of a small road that has a bit of parking (but I wouldn’t recommend it for motorhomes) and descends further down to the river. There are lots of warning signs here about the water levels which are controlled by dams upstream and so may change unexpectedly and have nothing to do with recent rainfall. I can see that bathing here would be very tempting at the end of a long hike. 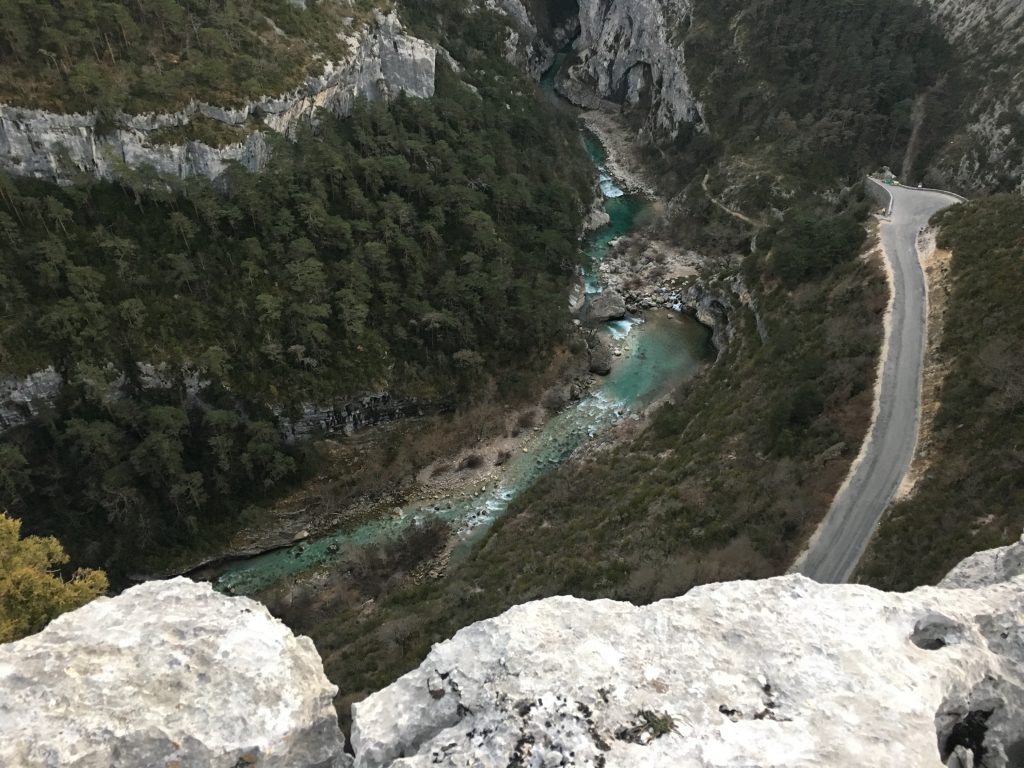 Looking down onto the first section of the walk, from the viewpoint at Point Sublime

From here you are on the route proper, and it’s a well made path without any major issues unless you suffer from a fear of heights or enclosed spaces. All the way along here the views are amazing. Sometimes you are below the towering cliffs, sometimes you are close to the rushing river that has been pinched between the walls of the gorge, sometimes you have views across or down the gorge. There are so many photo opportunities it’s amazing that anyone makes it to the end of the walk. 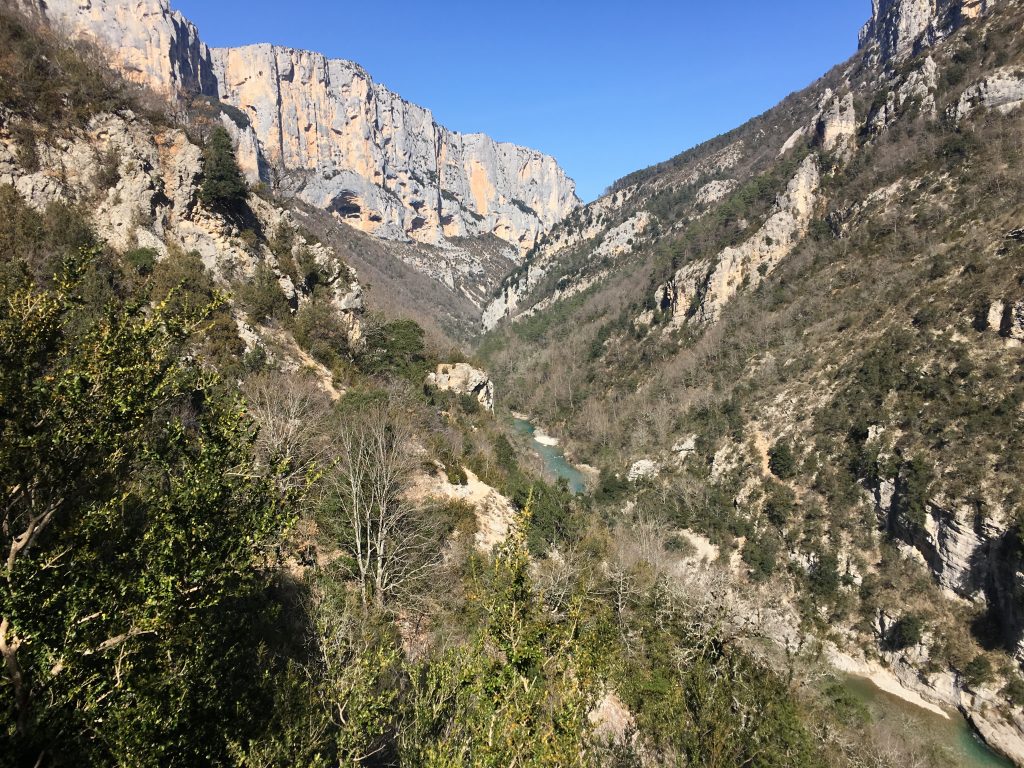 Our only slight disappointment was that the walk itself was not very challenging. Despite warnings of difficulties you really only have lots of steps and a couple of tunnels to navigate. In a few sections there are handrails to give you confidence over particularly polished sections of rock, but there is no significant exposure. I’m not trying to play it down, you need to have an average level of fitness, wear decent hiking shoes or boots, carry food and water AND A TORCH, but it’s really not a difficult hike. Probably the biggest risk, and something you cant do much about, is rocks (or ice in the winter) falling from above. 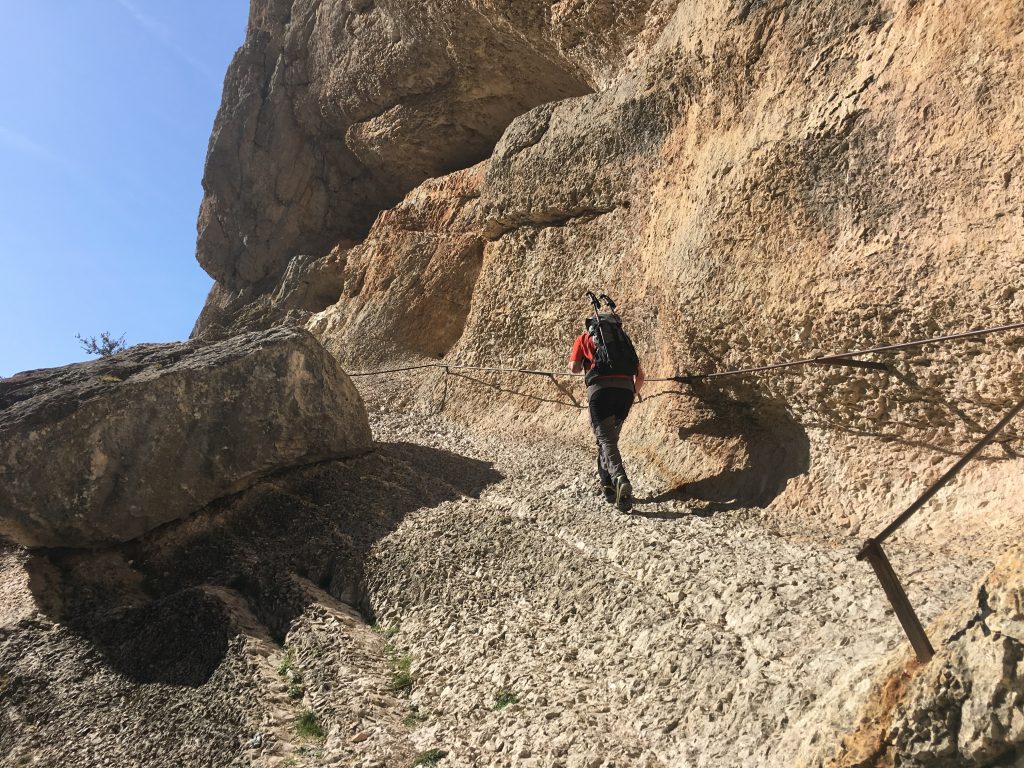 One of the helping handrails

There are two tunnels you have to walk through, the first (closest to Point Sublime) was 650m long with some viewpoints along the way, the second was a lot shorter. The windows and openings offer fantastic views of the gorge and were adorned with ropes and fixed anchor points for climbers. There are further tunnels but the have suffered from collapses and are deemed unsafe – the path goes around them. All of these manmade tunnels are the result of an abandoned hydroelectric scheme from the early 20th century when they ambitiously planned to channel the water from the river through the tunnels. Sections of them are very dark and a torch is definitely required, there were also a lot of puddles when we walked through. Emerging from the tunnels into the warmth of the gorge was like entering the lost world and we wondered if we would see dinosaurs rounding the corner, but all we saw were a few walkers and climbers. 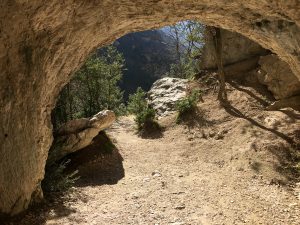 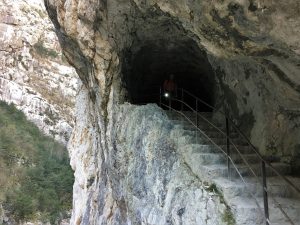 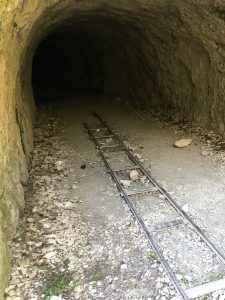 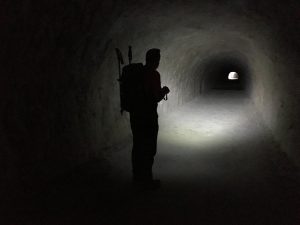 We managed to get as far as the many stairs up to the Breche Embert viewpoint, but decided not to climb them as Paul’s knee was giving him some issues after his icy mishap when cycling a couple of days previously. We think that made it about 22km in total there and back, although our GPS was not very happy about being down in the gorge and in the tunnels, so it recorded a bit of an odd route. Most of the walk was on the sunny side of the gorge, and combined with the shelter offered by the rock walls it made it a very warm walk, I cant imagine how hot it must get in the height of summer. There are a few cool spots though, for example at the eastern end of the first tunnel the path and steps were covered with a thick sheet of ice. 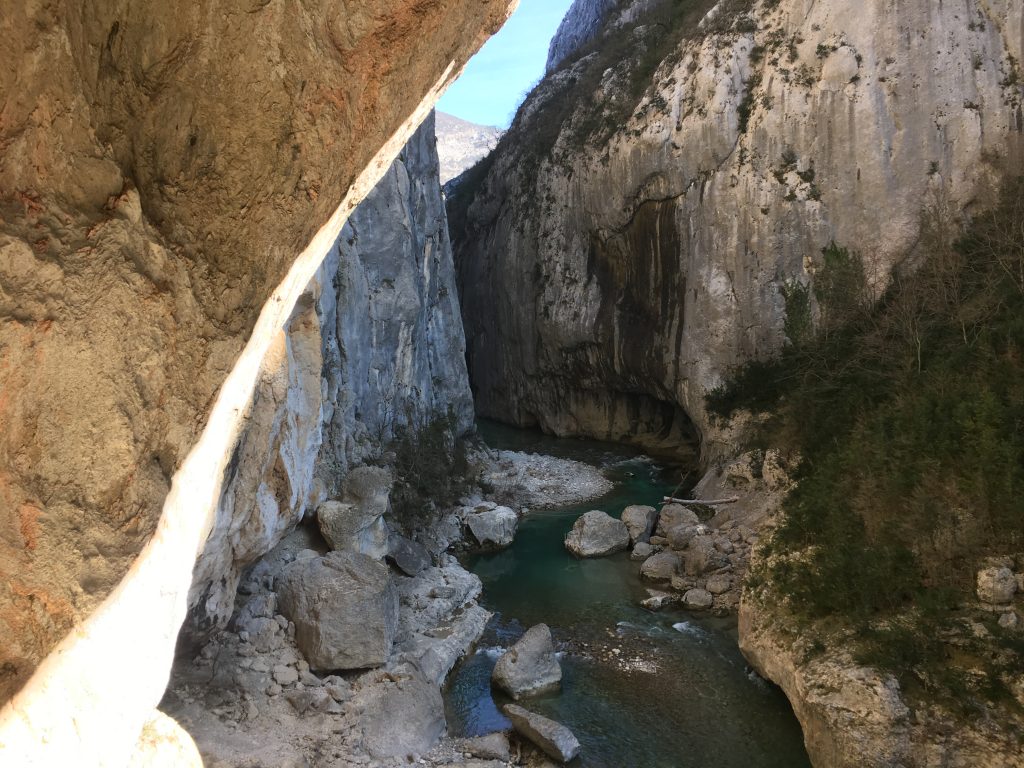 The Baume aux Pigeons viewpoint from one of the tunnels

I would certainly recommend this hike, in high season I would try to start as early as possible to avoid the crowds, and book your taxi or shuttle bus in advance. If you like walking then the Verdon area has many more hikes that are just as rewarding and probably a lot less crowded. 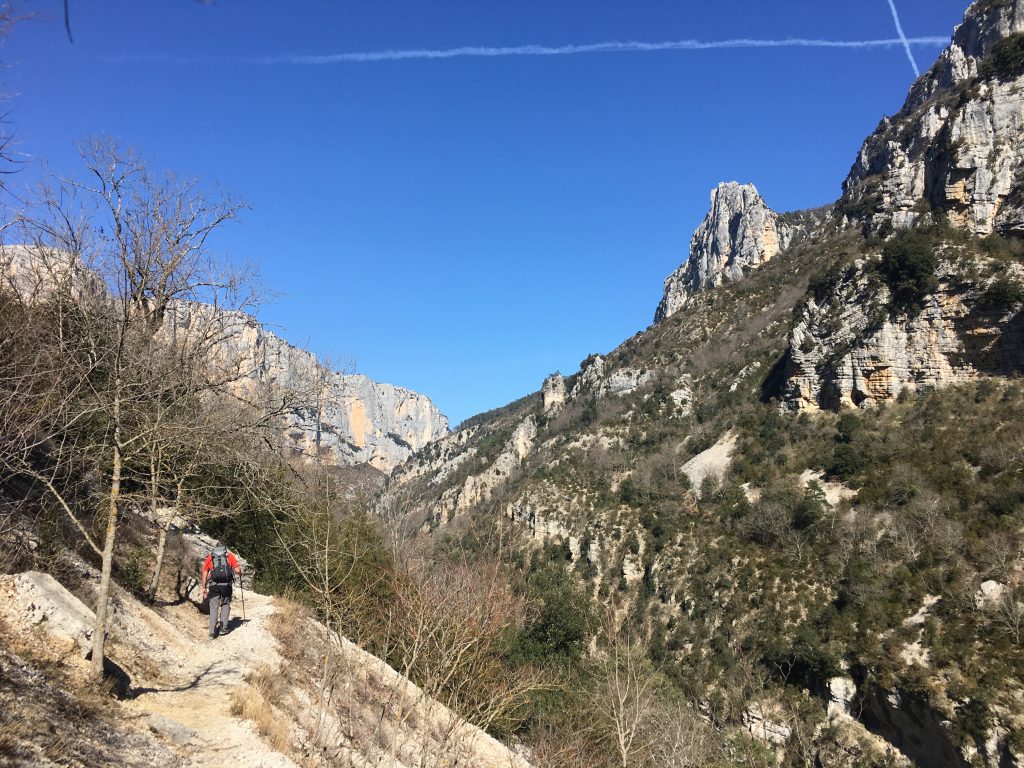 That night we stayed at Point Sublime again, making the most of the pitch black surroundings to gaze up at the stars. The next day we were going to be leaving the area so we wanted to make the most of this fabulous location. 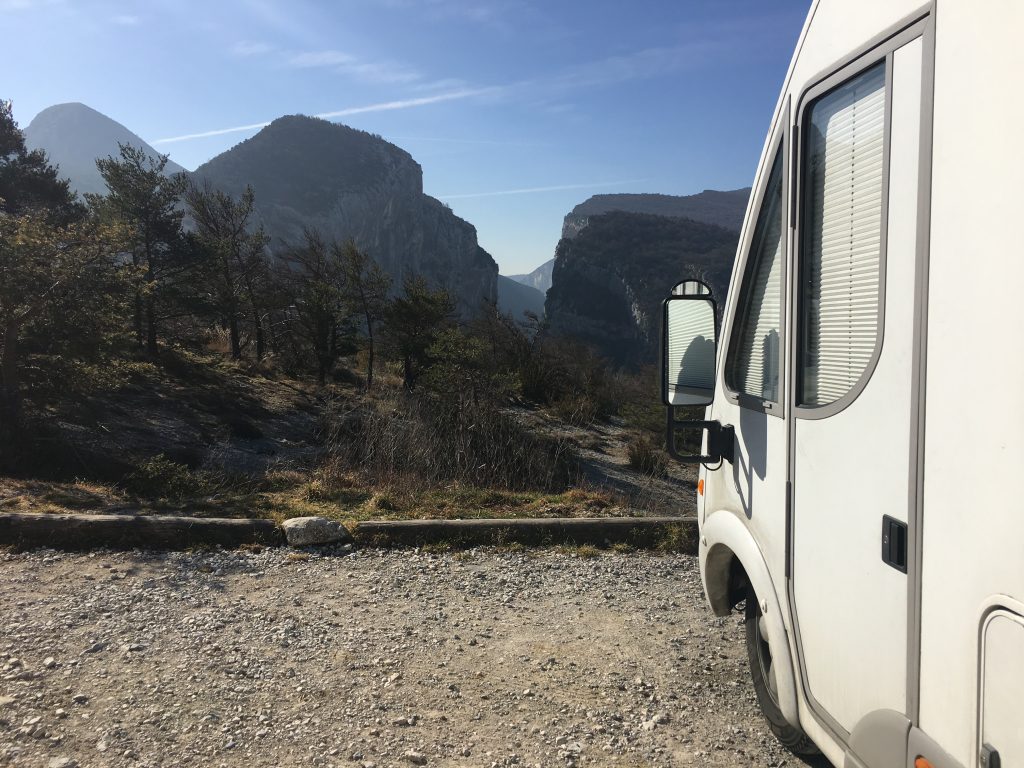 Bertie woke up to this view