We had spent a few days discussing a possible visit to the Verdon Gorge. Would we go? It was ‘sort of’ en-route, but ideally we would want to spend a week in the area, not just a day. Would it spoil it for us if we went for such a short time? Sometimes I think we just drag these decisions out in order to have something to talk about, after all it was never really in doubt. Unless the weather was atrocious we were going.

And the weather was going to be perfect. The forecast was for sun and very little wind. We had a slight hiccough when we arrived at our overnight parking in Trigance. The forecast of light winds seemed like a mickey take as strong gusts rocked Bertie and trees bowed down to scrape the roof with their branches. We checked the forecast, it was still saying light winds, but now there was a warning of strong gusts until 11pm. We crossed our fingers and fortunately the gusts really did stop as forecast leaving us in an eerie but welcome silence.

So with good conditions we had to decide how to make the most of the day. I really fancied the Sentier Martel, but it’s a walk that takes 7 hours one way and the buses that run in the summer to shuttle people back to their cars were not in service on a mid week day in January. Having looked at various options, and agreeing that we had to do something energetic that included views of the gorge, we eventually decided that we would cycle the Route des Crêtes. This is a 23km round trip on the D23 road, offering good views of the gorge and a nice climb and descent all on tarmac. It’s a popular route with drivers, bikers and cyclists, so we weren’t breaking new ground, but we hoped it would be quiet on this winter midweek day.

We tackled the route in the conventional way, clockwise, from La Palud-sur-Verdon. From our overnight parking spot at Trigance we drove to Palud, where we easily found parking in the small car park at the eastern end of the village. Not something that would happen in high season, but there are various parking spots along the road and a big campsite by the start of the D23.

Setting off we had a nice stretch of downhill as we cruised down the D952 towards the junction with the D23. We turned off here and before the climb started we came to a big red sign saying FERME. We chose to believe that this only applied to cars, and as there was no chance of snow or ice on the route we felt confident about our safety. The ascent started, it was energetic but not too much so. As we pushed uphill we met another cyclist who was coming downhill on his road bike, apart from that cyclist and one car we had no other human company, what a joy.

The route has the advantage of many belvederes (view points), but our solitude meant we could stop at any opportunity for views of the gorge in front of us or the valley behind, taking all the sting out of the uphill. The viewpoints give opportunities to get a bit closer to the edge on foot, and we peered over the railings with awe to see the sheer sided cliffs and the thread of green river below. Griffon Vultures, re-introduced in the 90’s, flew so close we could hear their wings beat. Attempts to capture this on camera were thwarted by our desire to watch them. 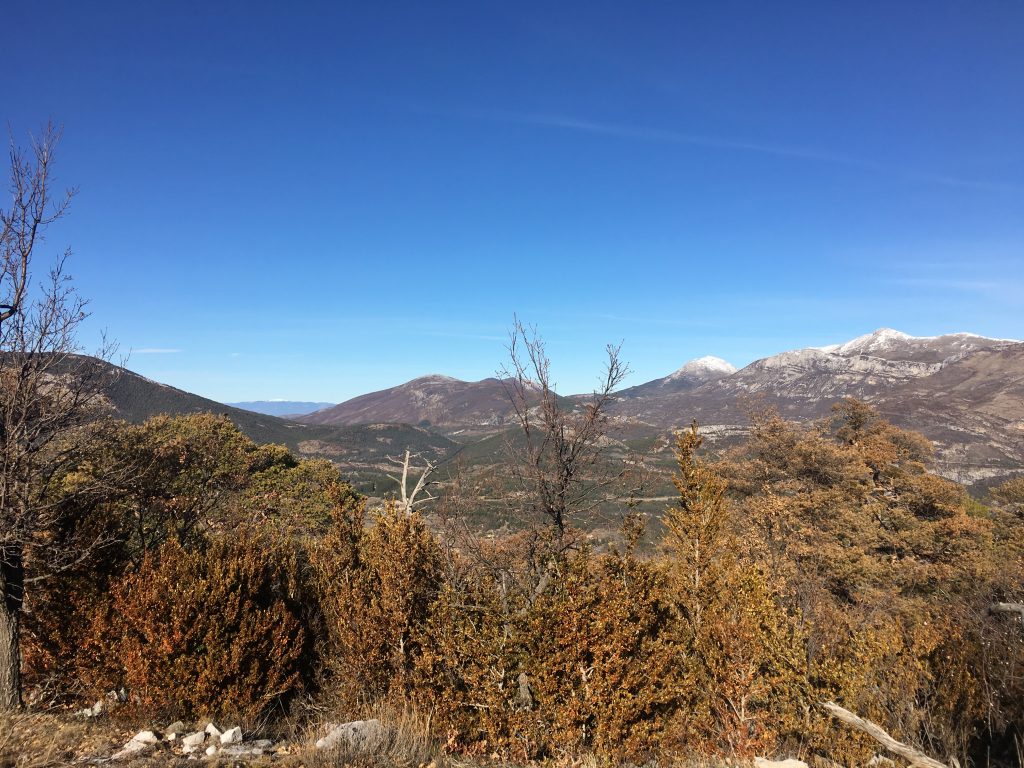 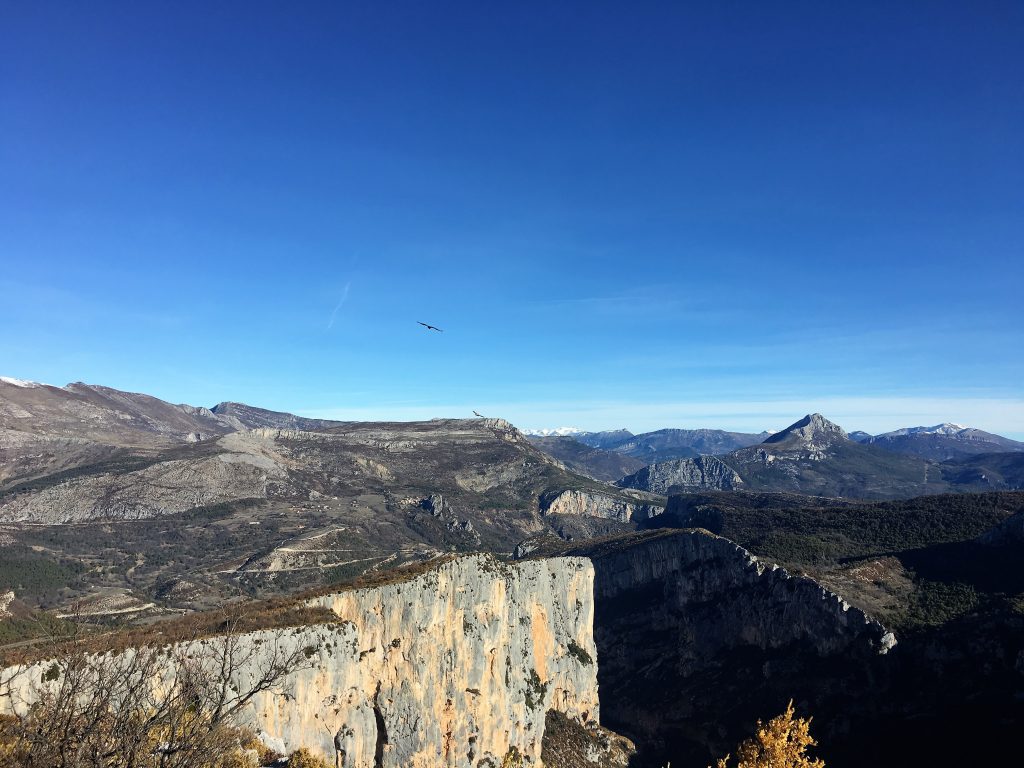 To the east we can see the steep sides of the gorge and the distant mountains. Griffon Vultures fly overhead. 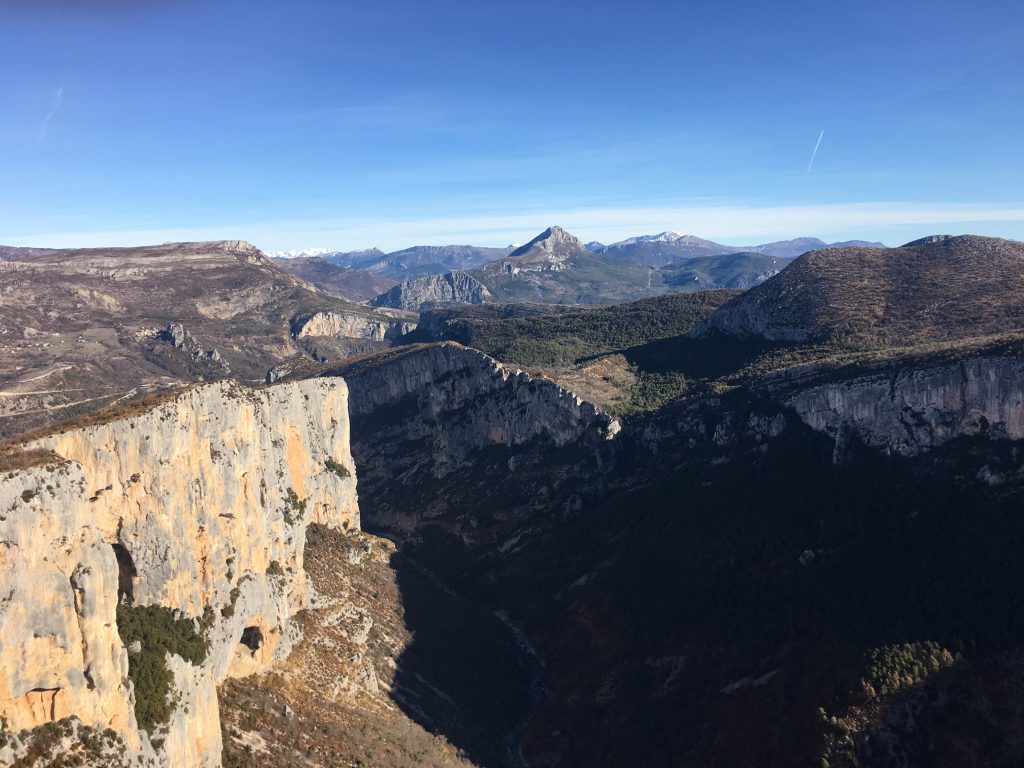 Down below is the narrow river that carved this fantastic feature 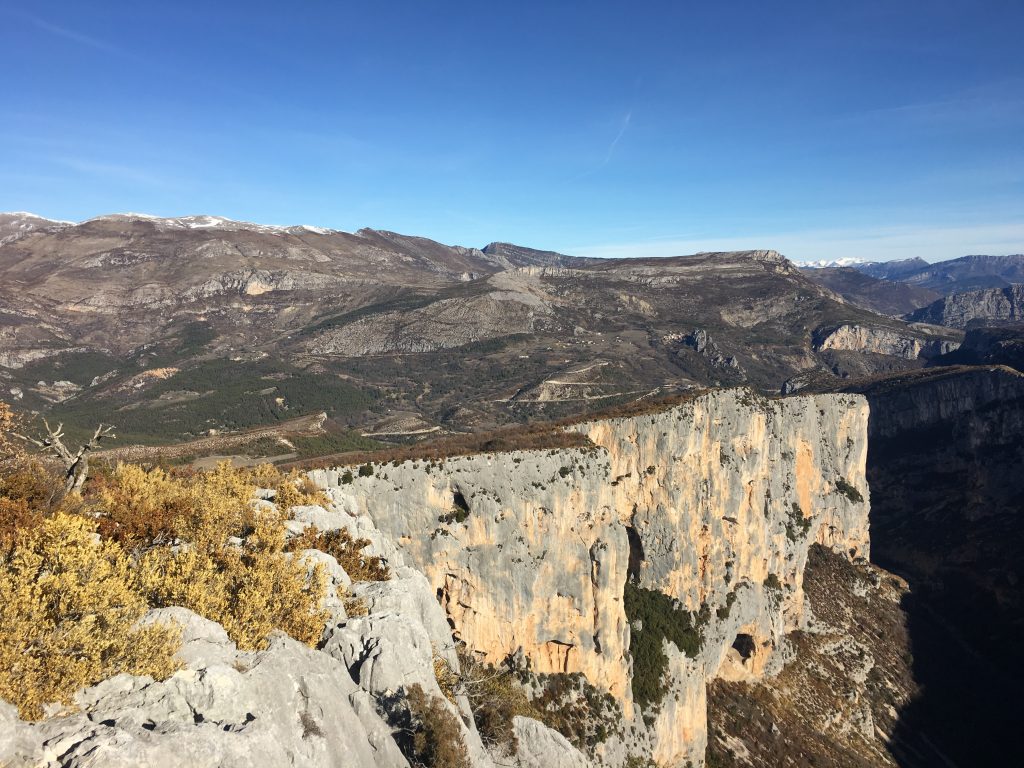 Another view of the sides of the gorge

As we approached the highest point we watched a car drive past us and around the ‘road closed’ barrier. We stopped just after the highest point for our lunch and to watch the vultures again. The car was parked just ahead of us, the driver standing and staring at the sight above him. The reintroduction program must have been a great success as there are at least 20 birds wheeling overhead and more gliding through the gorge.

After lunch we let ourselves freewheel downhill, around the hairpin bends and through the short tunnels. It almost seemed a waste to take it so fast but at the same time it was exhilarating. Our only caution was for the fist sized rocks that had fallen from the cliffs, otherwise we had plenty of room to swing around the turns. At the bottom we were full of high spirits. The adrenaline powered us up the slight incline of the next section as we turned right and entered a lesser gorge, wooded and attractive but without the spectacle of the main gorge. It felt too soon to be getting back to the beginning, but as we rounded a bend we could see the village in front of us.

A brief visit to the gorge, but one well spent. We look forward to returning, we want to kayak on the lakes, hike the Sentier Martel and take other walks around the mountains. That’s at least a couple of weeks enjoying all the area has to offer. But right now we’re on a deadline and cant hang around.

Out thoughts on driving the route in a motorhome.

Firstly, yes we would do it, once you have driven to La Palud you have driven along mountain roads anyway. There is nothing worse ahead. Having said that, Bertie is over 3.5 tonnes (see below) and actually we think this is much more enjoyable under pedal power.

We have no idea what this is like in summer, visions of conveyer belts and nose to tail vehicles come to mind. I think I would avoid July and August if possible.

Take the opportunity to stop wherever possible, the belvederes just before and after the top were our favourite spots. You are here for the spectacle and, if possible, that means getting out of the van and wandering off the road and down the steps to see the gorge at it’s finest.

The route is one-way for the downhill section and so should be tackled in a clockwise direction.

There are two short tunnels on the downhill section. The lowest of these is over 4m in the centre and 3.6 meters at the sides. They are wide enough for large vehicles with room to spare (no width is given but I would estimate just over 3.5m).

The road width is generous for single track, there are no points where you would need to be really close to the edge even in a motorhome. We’ve been on similar sized mountain roads where traffic has flowed in both directions. If you’re comfortable with mountain roads and hairpin bends then this will be a straight forward drive.

The road is closed each year between Nov and April, exact dates vary but can be found on the tourist office website here. The closed section is along the downhill stretch from the highest point, down to the Chalet de la Maline. You can still access the uphill section of the route in motorised vehicles which gives access to good viewpoints over the gorge, and there is a reasonable sized turning spot at the top. The barrier is pretty half hearted (just a low barrier across one side of the road) and while we were cycling the route one car drove past us.

There are signs limiting the route to vehicles 3.5 tonnes or under. I know people have done it in heavier vehicles. It feels as though this limitation is very cautious rather than being driven by the structural capacity of the road. But I don’t know that, and, well…insurance companies and breakdown recovery…I wouldn’t risk it.

And the Routes des Cretes is not the only road that gives great views of the gorge, you can do a circuit around the north and south side of the gorge, these roads have traffic in both directions but are a bit wider. The D71 gives good views, as does the D952 where it runs along the edge of the gorge with fantastic overhanging rocks providing a bit of atmosphere. The Point Sublime is a good spot to stop and take pictures. It is also at one end of the Sentier Martel if you fancy a walk. 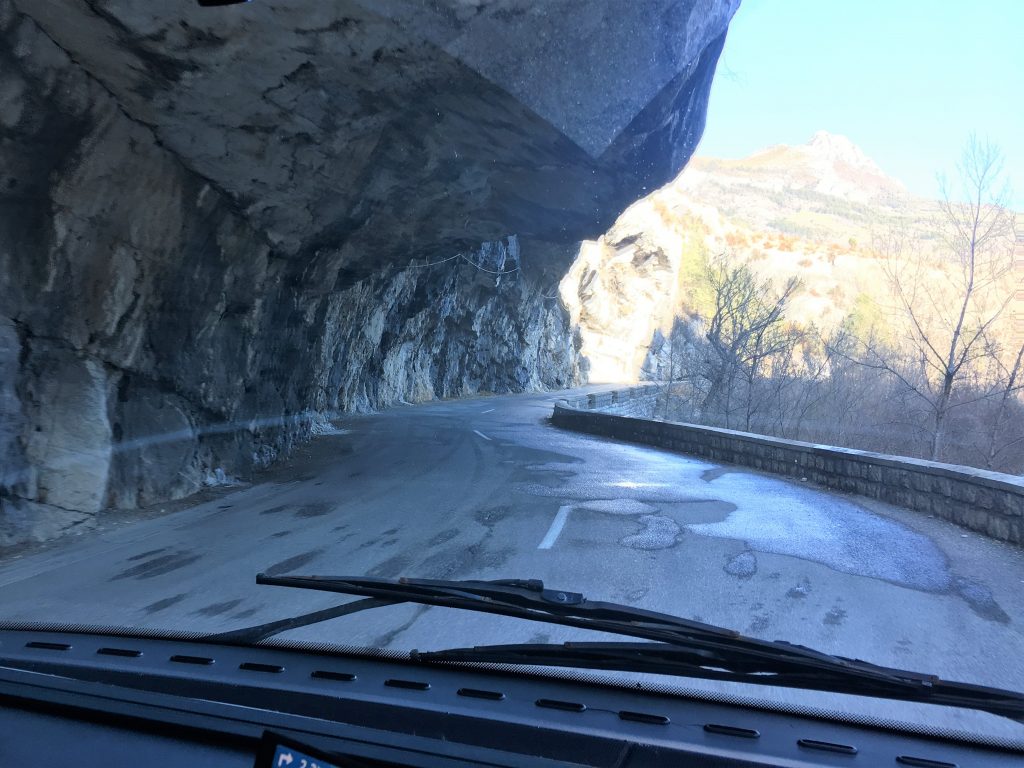 The overhangs look perilously low, but as you get closer you realise there is plenty of room