Normally our travel schedule is built around things that we want to see or do, but after Chateau Peyrepertuse we didn’t really know what to do next. Our alternative strategy is to look parking locations and see if any reviews spark our interest.

In this way we had found Sommières, which was in the right direction of travel. We had spent the Saturday night here and our sleep had been rather fitful, the Saturday evening revelry had woken us up every now and again and the morning was noisy with the sound of fit people doing energetic Sunday morning things.

One reason for deciding on this parking spot was a review comment about a cycle track down the river towards Nimes, but in our bleary eyed state it wasn’t going to be particularly pleasant. Instead we wandered the streets of Sommières, finding a charming town of medieval cobbled alleys, arcades and archways. We wandered up to the castle, which was shut but offered good views, and down to the bridge, famous for having buildings built on it’s outermost arches; now it’s impossible to tell where the bridge ends and the streets begin. There were shuttered windows and stone tenement buildings. Cafes were open and bakeries and patisseries offered artful displays of pastry and bread. Joggers and lycra clad cyclists were doing a much better job than us of being energetic, but most people were just wandering like us. As we wandered around we found a memorial to Lawrence Durrell who had owned a villa and died here, a claim to fame we had been unaware of. 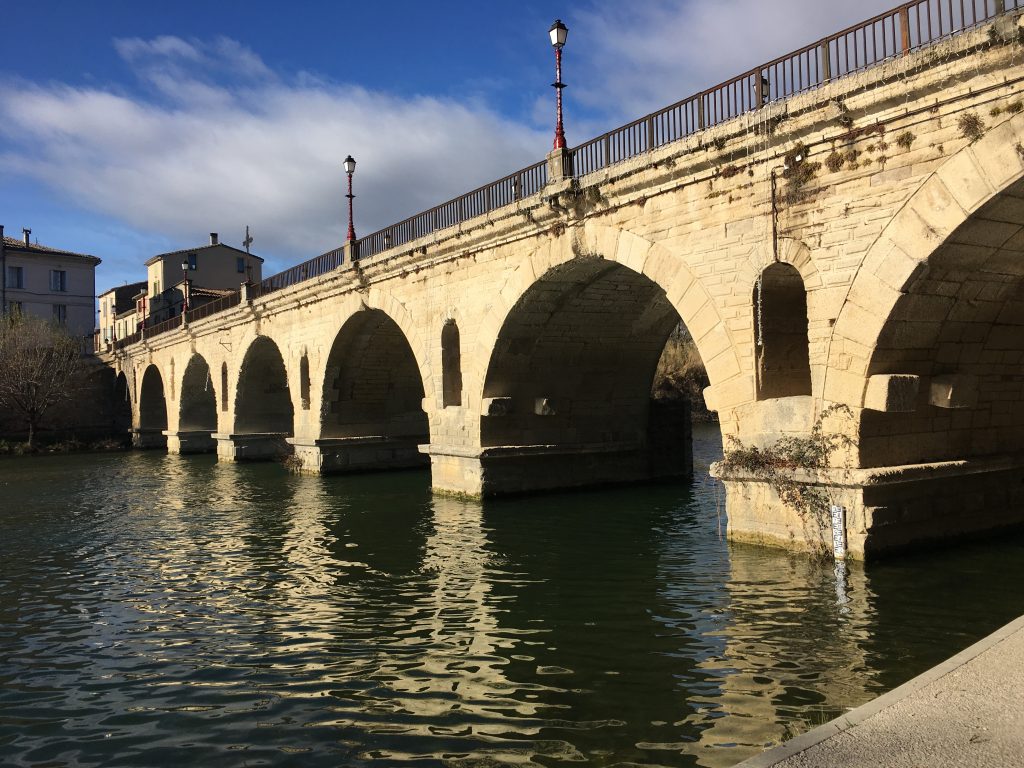 The arched bridge, originally Roman, but extended and built on from Medieval times onwards 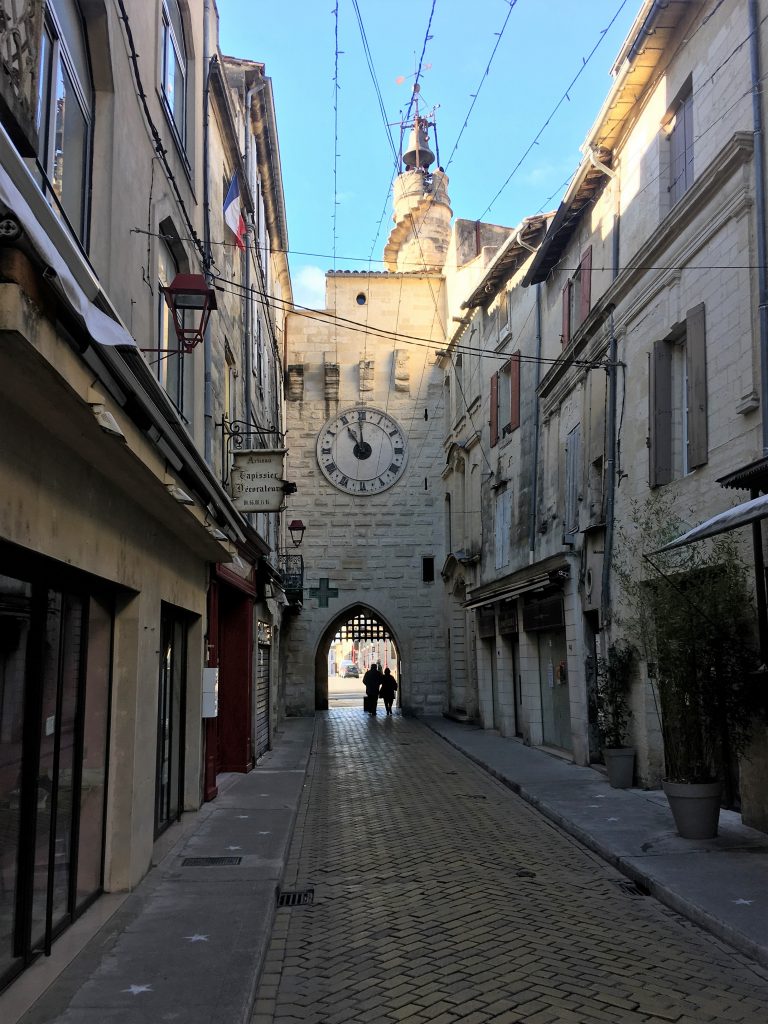 One of the town gates 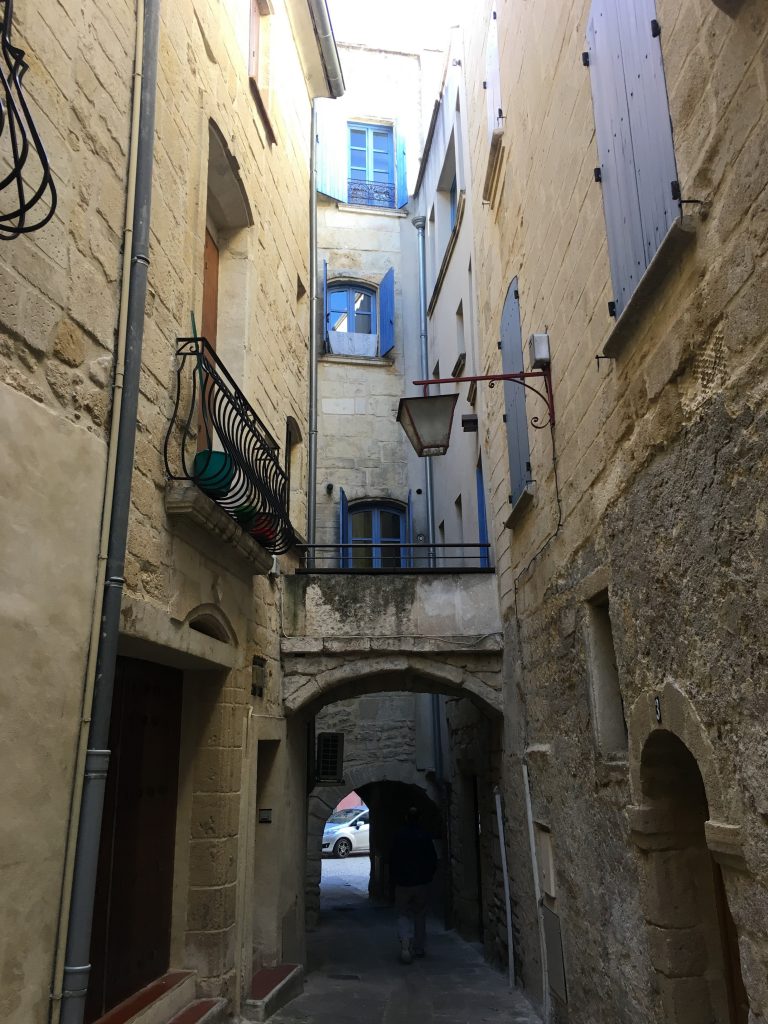 In the early afternoon we moved on to another parking spot chosen in the same way. It was only mid afternoon and we weren’t going far. This time we ended up in Saint-Chamas, another pleasant small town where shuttered houses with pastel shutters are set out in a neat grid formation. Here we parked on the shores of the Étang de Berre where the wind was whipping up white horses. We walked a short distance along the lakeside but found our way blocked so headed towards town instead. The town is divided by a long cliff, and we could see caves carved out of the cliff looking out towards the lagoon. At one point a gap in the cliff is spanned by an aqueduct so we just had to climb to the top to see the view. 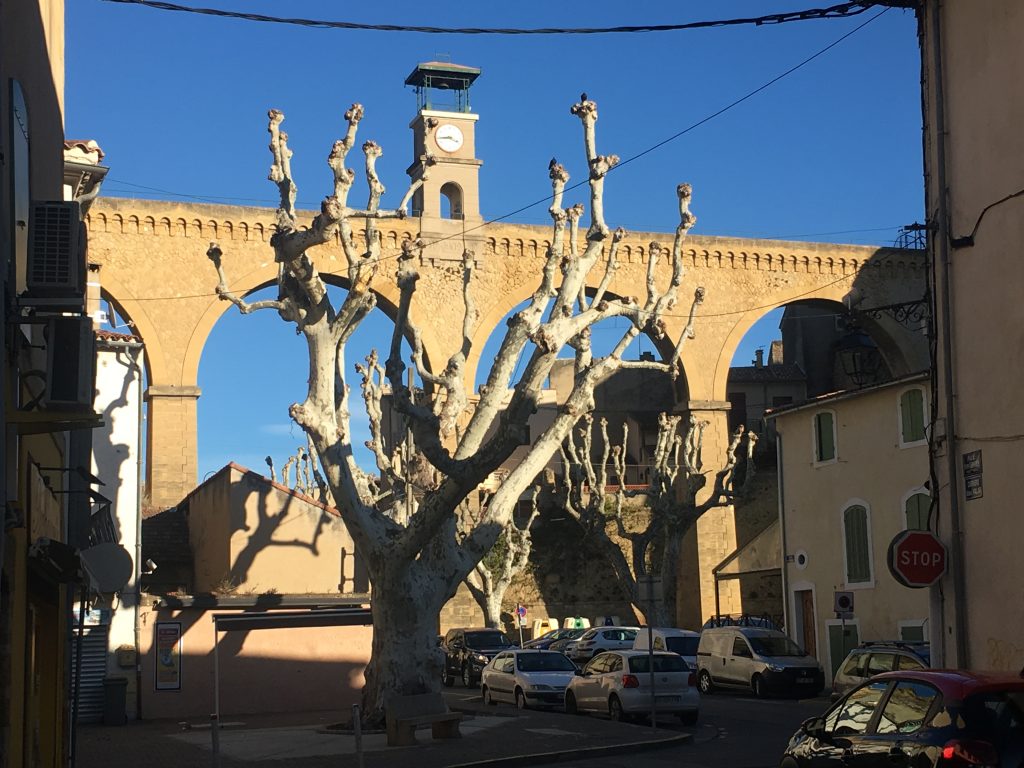 The aqueduct cuts across the centre of Saint-Chamas 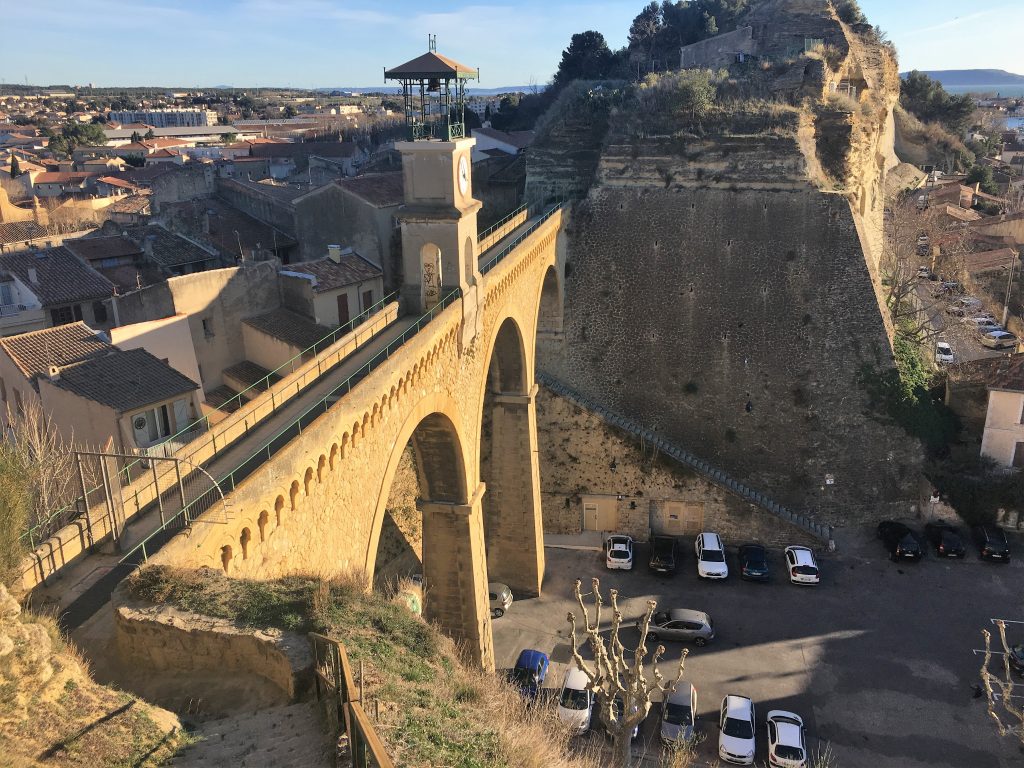 From the tope of the aqueduct you can see both sides of the town. 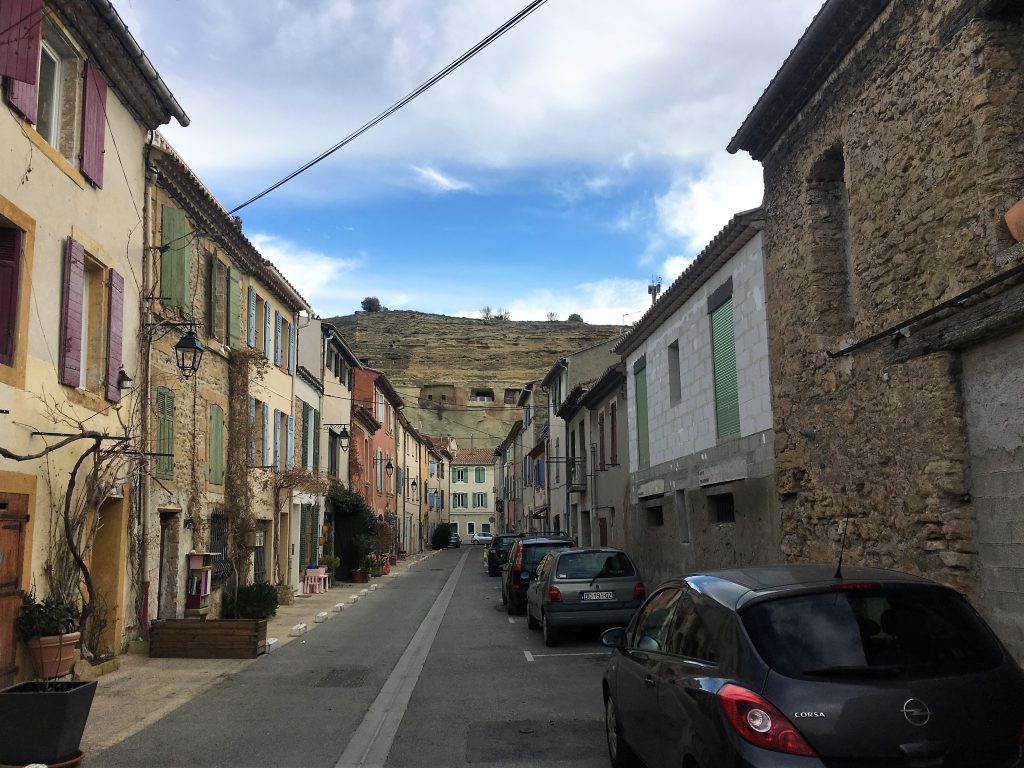 Saint-Chamas street with caves cut into the cliff behind

The parking at Saint-Chamas is supposedly charged, and we were expecting the police to drop by at some point and collect some money, but they drove past and neglected to charge us. We weren’t complaining and felt quite smug compared to the French van that had arrived late and set off early. The following morning I popped into the tourist office to pick up a jeton so we could fill up with water and we had a leisurely start to our day. 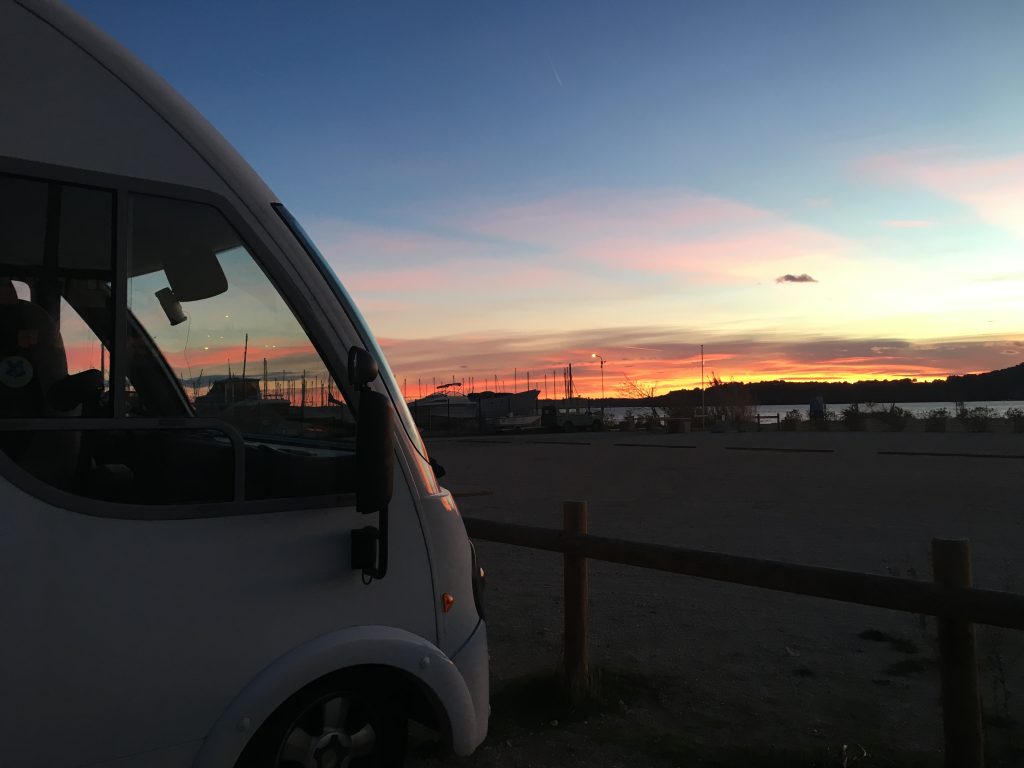 Bertie enjoys the sunset at the Saint-Chamas aire

We set off, choosing to follow the shore of the Étang for a while before breaking off east past Marseille. Just outside town we spotted another Saint-Chamas landmark, the roman bridge ‘Pont Flavien’ standing in a field and looking rather out of place now that it is no longer the main crossing point of the Touloubre river. Bertie had difficulty sticking to his lane due to Paul’s fixation with the sea planes that were taking off and landing near Marseilles, flying low over the road (which was quiet, fortunately). We drove through limestone hills, past vineyards and Provencal country houses enjoying the landscape on our way to our next destination. It was going to be a long drive, so we stopped at an Intermarche to get some groceries and have our lunch. The self service laundry facilities were too good an opportunity to miss so we laundered our clothes as we ate lunch. Exciting times! 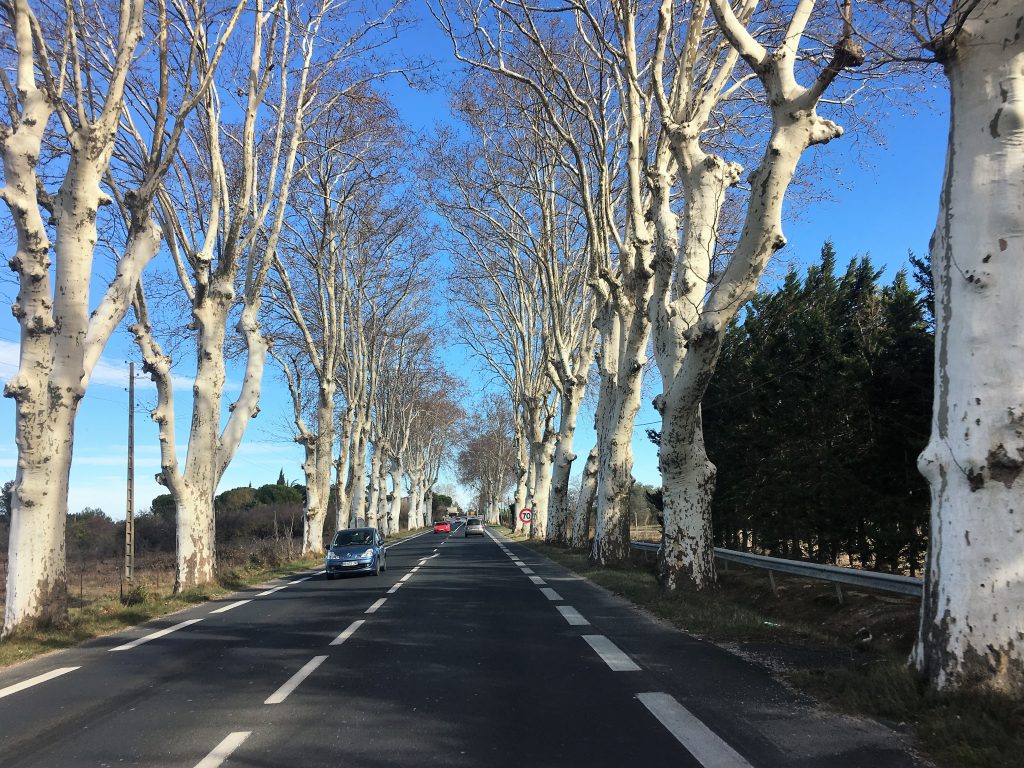