Our trip through France was just going to be a fleeting one, a few days to see us from Spain to Italy. Still, we wanted to make the most of it by seeing some sights rather than just driving.

We had spent a quiet night in the village of Duilhac on a free aire which had the usual facilities, even the tap was on which is unusual for a French aire in winter. The following morning we decided to walk up to Peyrepertuse Castle. We could have driven up to the car park, but we fancied stretching our legs with a walk up to the top of the limestone ridge where the caste perched.

We followed the road and then the footpath up and up, it was a strenuous and steep ascent, but only took us just over half an hour to get to the ticket office, by which time we were down to t-shirts and sweating profusely. The castle was built into the pale grey limestone of the ridge with local stone, at a distance it was difficult to tell what was castle and what was wall, but the size of the fortification was slowly revealed as we got closer. 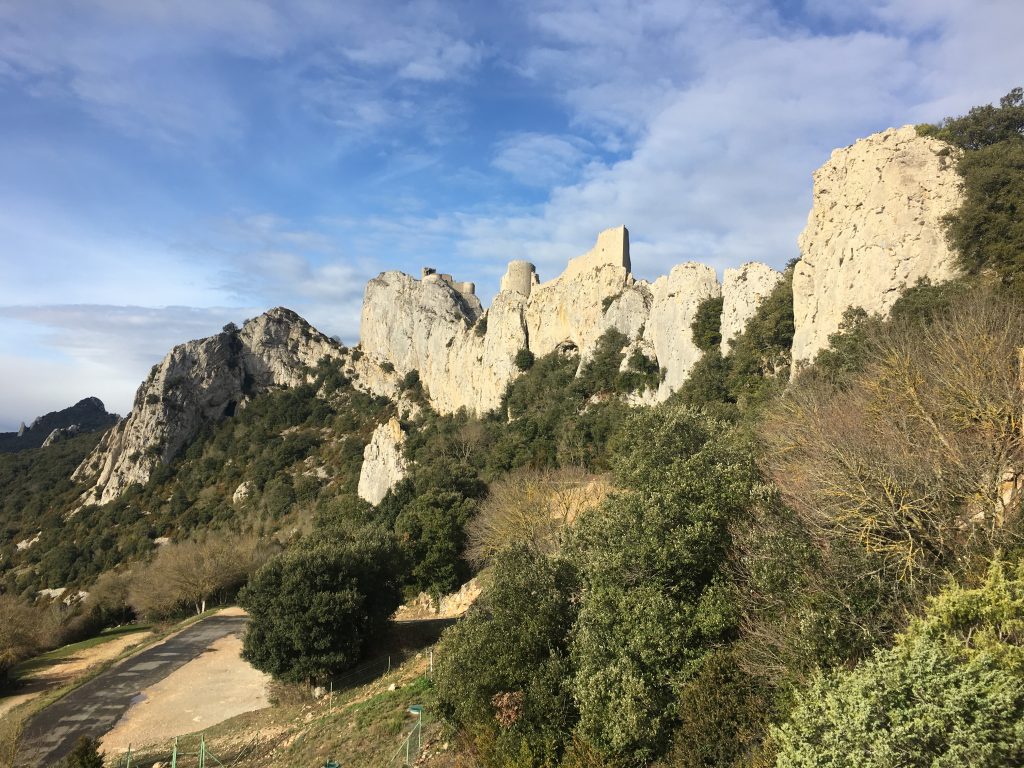 At the ticket office I used my awful French (interspersed with some Spanish words because my brain couldn’t cope with changing languages) to ask for two tickets. The woman who was on duty responded in perfect English and congratulated us for being the first visitors of the day, in fact we only saw two other visitors as we were leaving. We picked up the audio guide to help us find our way around the site and made our way even further up to the gates of the castle.

The route to the entrance took us further uphill and round to the other side of the ridge where we finally found the castle gates for the lower keep. On the way we were accompanied by the deep voice of Le Capitaine Alban, complete with very French guttural ‘thinking noises’. This was a great audio guide, the Capitane is taking an inventory of the castles defences and so it is acted rather than being a dry commentary. In addition it has a glossary of terms which Paul found fascinating. Here we learned that the square holes for holding beams are Putlock Holes, and that the man powered ‘hamster wheel’ mechanism for raising and lowering building materials is actually called a Squirrel Cage. 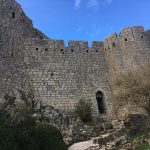 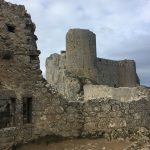 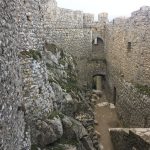 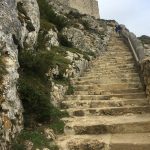 The castle is often called one of the Cathar Castles, although very little of the Cathar era structure remains, most of it being the lower walls and foundations. The majority of the building, especially the higher keep and dungeon, was built at the order of Saint Louis shortly after the crusade against the Cathar ‘heresy’ was called to a halt in the 13th century. At this point the border between Spain and France was still being disputed and the castle formed part of a network of border defences. By 1659 and the Treaty of the Pyrenees the castle was no longer on the border with Spain and so was decommissioned. 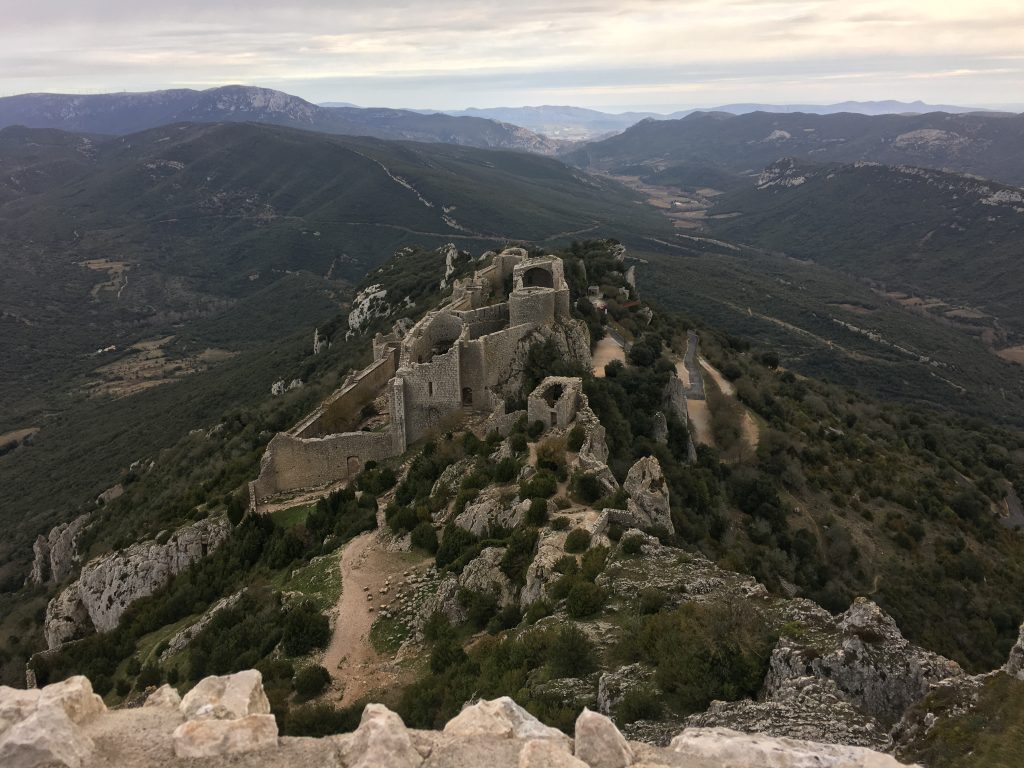 The view from the upper keep

We spent a couple of hours wandering around the castle taking in the views, marvelling at it’s defensive position high above the valley and wondering at the efforts of construction in such a difficult location. Eventually the wind started to swirl around us and raindrops started to fall from the lowering clouds. It was time to leave and head back to Bertie, this time wearing a couple more layers. 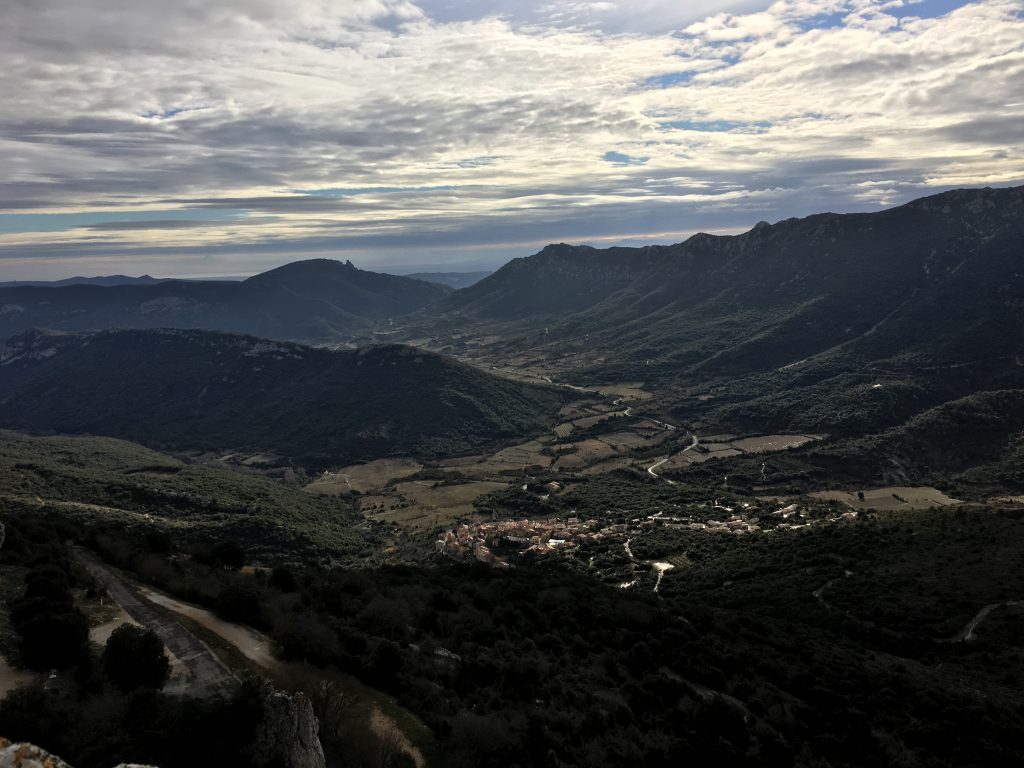 Looking down towards Duilhac, on the distant ridge is another Cathar Castle – Chateau de Queribus

In the village we searched for the local shop, but they couldn’t sell us any bread – have you ever heard of such a thing happening in France? So for our late lunch we fell back on our emergency cream cracker supply.

We moved on that afternoon, taking a long drive through the hills to Montpellier, where our avoidance of tolls took us through the city outskirts. It was dark by the time we arrived in Sommieres and the town was bustling with pedestrians enjoying their Saturday evening. The approach to our parking spot was through some of the narrow medieval streets of the town. We held our breath hoping that the sat nav was taking us in the right way. Luckily we found the signs for the municipal camping (our parking would be just outside the closed campsite) and we followed them through right angle turns and narrow streets to join a few other motorhomes in the large car park.