We stayed at Portbou harbour for our last night in Spain. We hadn’t intended to stay there but had been frightened off our intended parking spot – Platja de Garbet – by signs indicating that motorhomes weren’t welcome and threatening tow trucks. We would have happily stayed the night, but we wanted somewhere we could leave Bertie while we went for a bike ride and Garbet wasn’t going to be it. A shame as the beach was lovely and empty apart from a few walkers who were taking the coast path at the bottom of the cliffs. We had a quick nosey at the path which looked interestingly rocky and close to the sea, but only wandered as far as the Port de Joan before turning back. 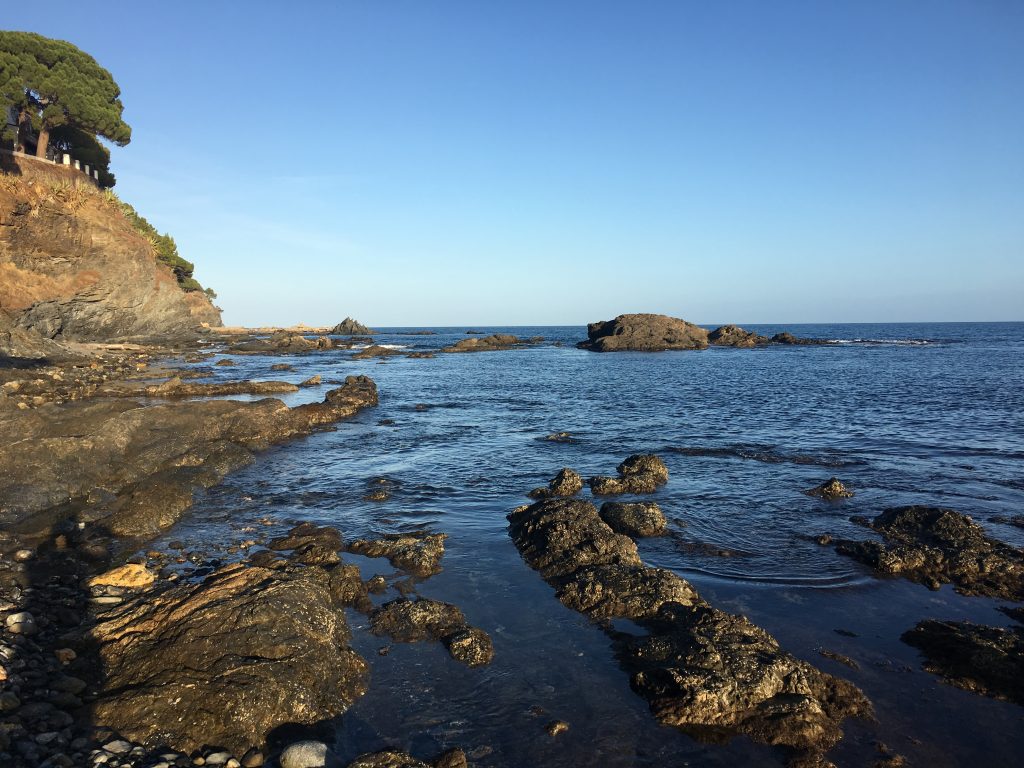 The coastline at the Platja de Garbet

Portbou harbour had it’s attractions, yes it was €10 so more than we had hoped to pay, but it had facilities, was close to town and we knew that we could head up into the hills on our bikes from here. We wondered if we were going the right way, the route to the harbour goes into the town, through a small parking spot and then around a concrete road that skirts the bottom of the cliffs. You cant see the harbour till the last minute.

We arrived to find another British van parked up, but (in typical British style) as it was dark we kept ourselves to ourselves until the following morning. When we had a chat the following morning they informed us that the parking had only been opened up when they arrived, the approach road to the harbour is prone to flooding when it’s windy. With high winds forecast for the following few days it looked like we had arrived at a sweet spot. It was no surprise that by the time we had got back from our bike ride the sign was back up saying that the motorhome parking was closed.

One of Portbou’s features is the huge railway station. This border station is where French trains have to change gauge to proceed into Spain, there is an equivalent border station in France which does the same job for Spanish trains going on into France. As we cycled into the hills we could see the buildings and tracks crammed into a rare section of flat land before disappearing into tunnels. 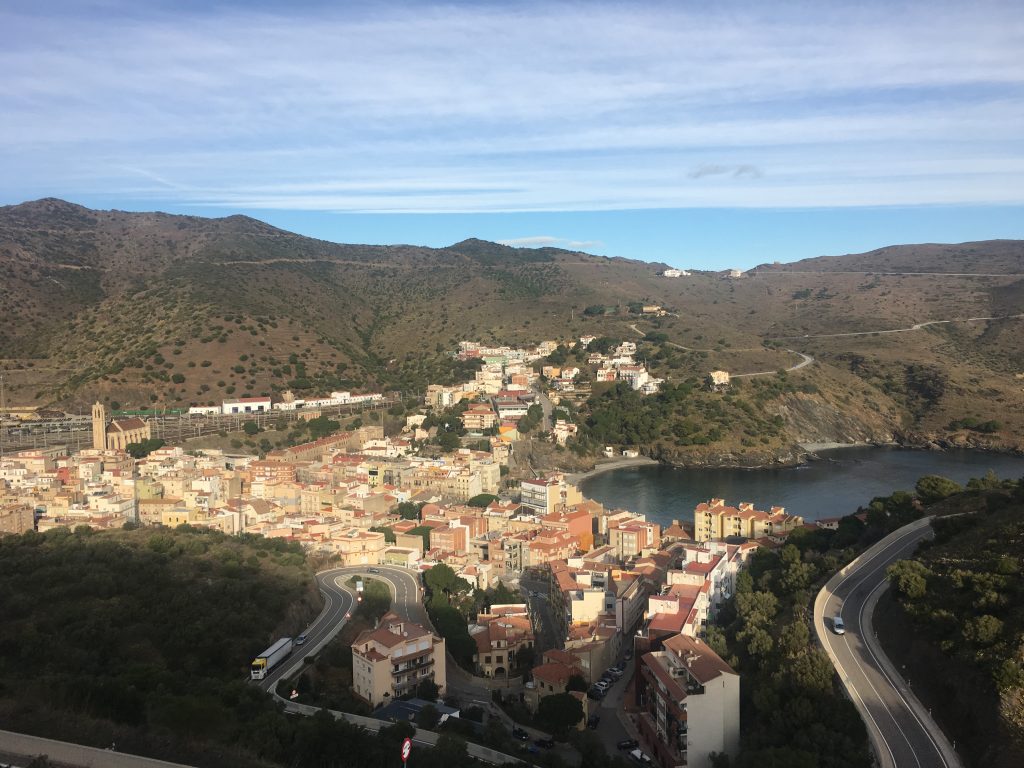 Our bike ride took us up the switchbacks of the N260a above the harbour until we left the asphalt to follow a track inland from the Coll de Frare. This track continued upwards inland, just below the ridgeline, and eventually led to the border with France. There was nothing here save for a water tank and we poked a toe over the border before continuing up to the end of the track at the Font de Tarabaus (I assume this feeds the water tank below). From here we could see spectacular views of the Pyrenees with their snowy tops as well as the equally beautiful coast of the Costa Brava. I think this is another place we will be coming back to explore in more detail. 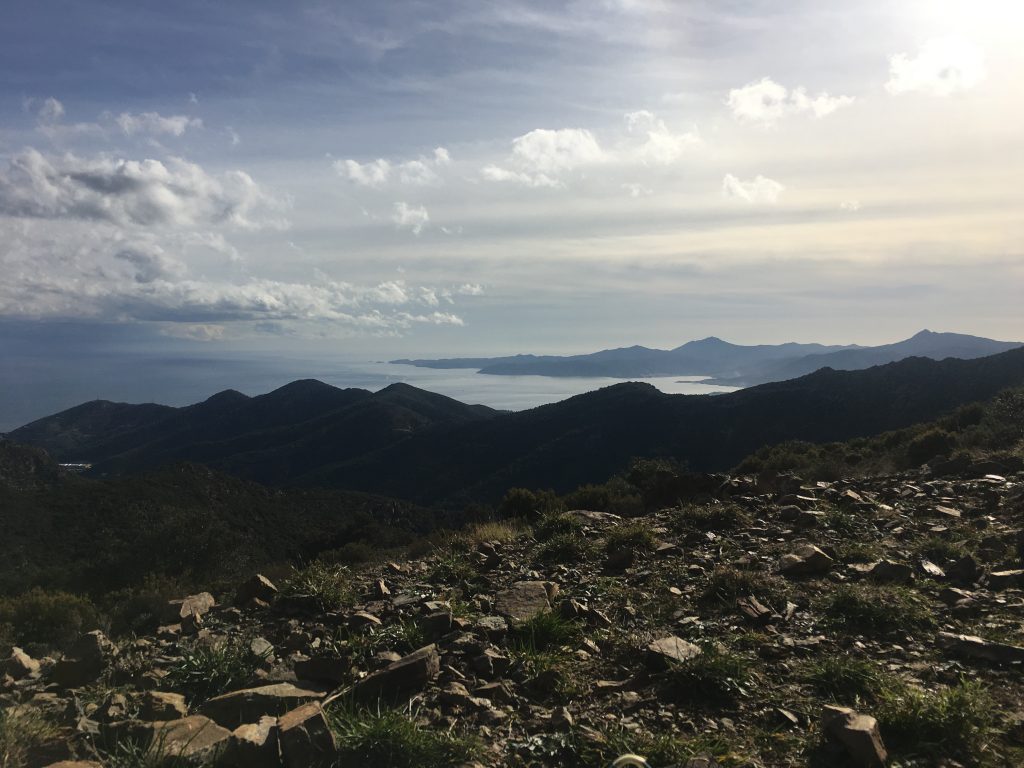 We started back down the way we had come, turning left onto a reasonable looking track (there had been some quite steep paths we briefly considered descending before deciding that it would be foolish) which took us down into the valley where we made a speedy return to Portbou, past farms and small holdings that nestled into the steep valley. This took us into Portbou via a tunnel under the railway before we got back to the harbour.

Once back it was time to get Bertie sorted and cross the border to France ‘properly’. We had to ask in the harbour office to get the facilities unlocked so we could empty our waste and fill up with water. I feel a bit shy emptying our toilet in front of strangers, but the chap who had unlocked everything for us politely wandered off so he didn’t have to look at the gunk that is ejected from our toilet cassette. I don’t blame him, it’s not pretty, we don’t use the blue stuff that turns effluent into something a smurf would produce so instead it’s a sludgy green/brown colour. Anyway, that’s enough – I hope no one’s eating while they read this.

The roads from here to the border were incredibly wriggly and hilly so Bertie was put through his paces, even when we left the coast there was no respite as we were heading inland to the hills of the Corbiéres region.