We took another long drive north, heading past Barcelona towards the town on Figueres. Along the way we passed fabulous scenery, including Montserrat – the serrated mountain – which hid the city of Barcelona from view behind it’s fantastic silhouette.

We were now firmly in Catalan Spain, on the route we saw yellow ribbons everywhere, tied to bridges, stencilled on rocks, hanging from windows. We later found out that the yellow ribbons are a symbol of solidarity with the politicians who were arrested without bail in the furore that surrounded the recent vote for independence.

The draw of Figueres was the Dali museum. Like many students of my era the walls of my room were decorated with posters, not the revolutionary images of Che Guevara that were popular in the 70’s, but the surrealist images of Salvadore Dalí  and the geometrical paradoxes of Escher. Much as I hate to admit it, this was probably driven by the posters available from Athena rather than any conscious choice. Nevertheless I’ve had an interest in both artists since and was very keen to visit Dali’s museum.

Before we got to Figueres though we needed to get Bertie’s tracking seen to. With the long drives Paul had noticed a slight pull to the right, and inspection of the tyres indicated the tracking might be out. We stopped at an industrial estate tyre centre where they sorted our tracking, but also managed to snap the adjustment arm. After some interesting attempts to communicate (google doesn’t translate technical terms very well) a bit of pointing at the broken part and then at tools we fathomed that the mechanic was proposing to weld the adjustment arm in place and we would need to go to a proper workshop to get Bertie sorted out. It’s not urgently though so we decided to leave that for another day.

Bertie’s wheels were now pointing in the same direction and we made it to Figueres where’s we drove round a few times looking for a parking spot that suited us. The town didn’t fill us with great joy, it looked quite run down and depressed. The couple of wild spots we found didn’t feel safe, too many young men hanging around. So we ended up in the supermarket car park with a number of other vans.

The Dali museum was fantastic, set in an old theatre that was burned and ruined during the Spanish Civil War. Dali moved back to Figueres when his wife died and restored the building, creating a museum of his art. It is crammed full of pictures, sculptures and installations, to the extent that you just don’t know where to look. I dragged Paul round a second time and could easily have gone round again and seen something new. As well as Dali’s own work there were items by other artists and I particularly liked the series of photos of Dali’s moustache. The ticket also gets you into an exhibition of the ‘jewels’ – Dali’s creations from gold and precious gems. Some of these were very beautiful and some just excessive and gaudy, but all worth seeing.

In the theatre courtyard a multitude of sculptures vie for attention 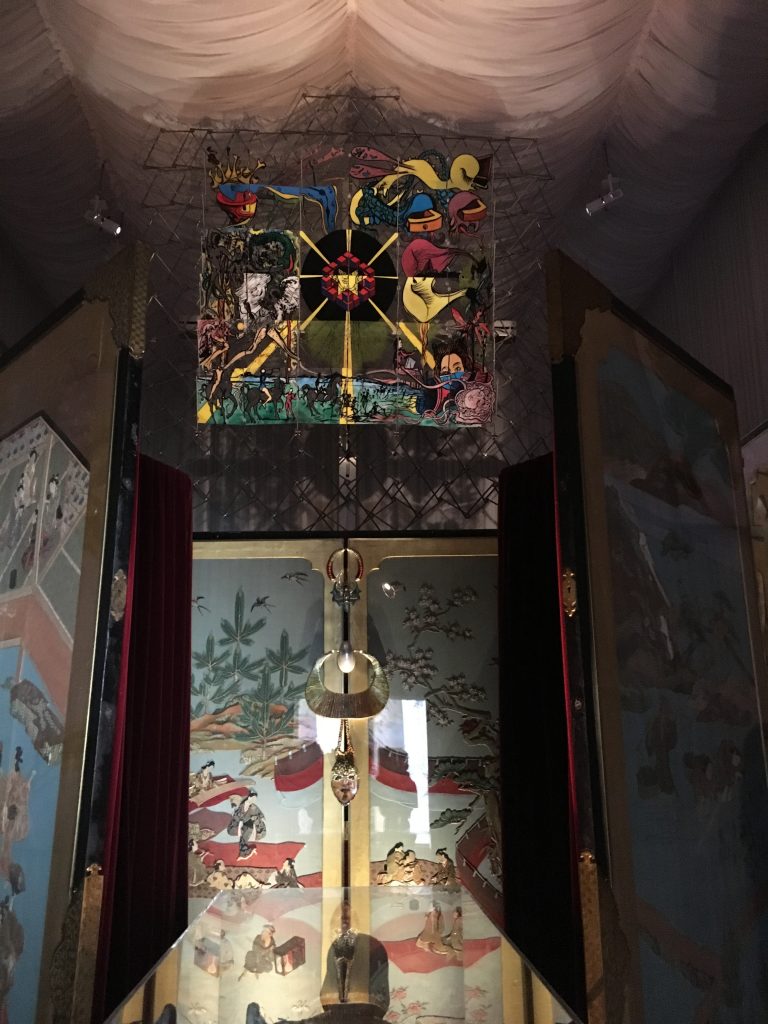 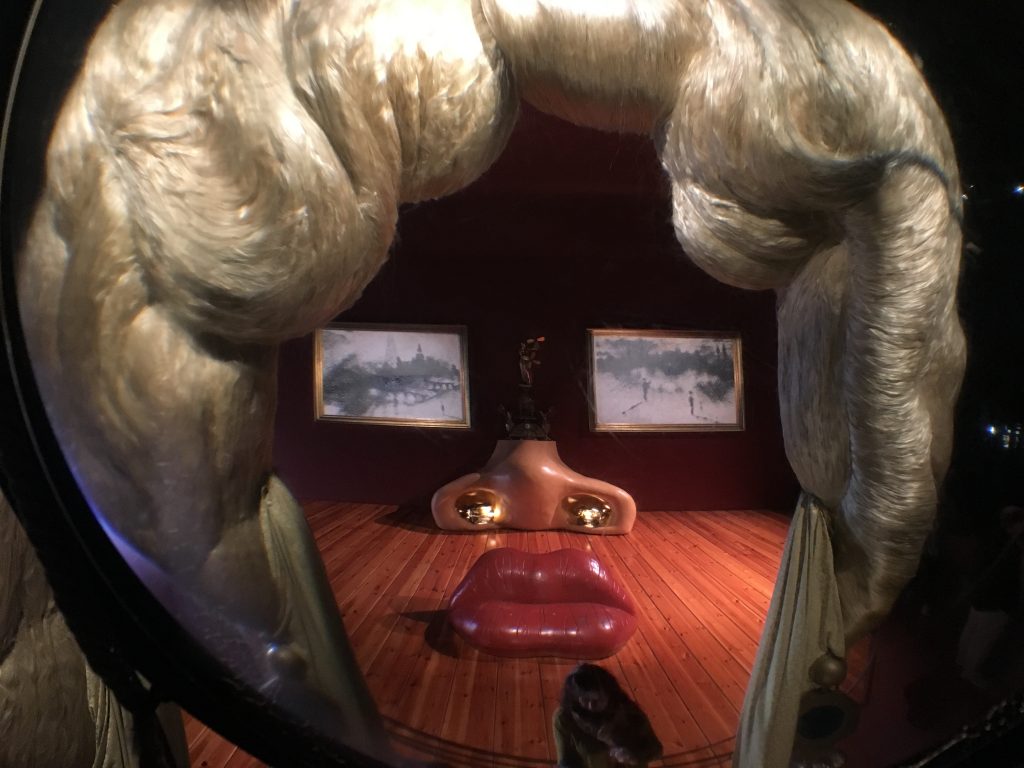 Dalí created this installation for his museum based on his painting of Mae West – the painting depicts Mae West’s features as furniture in an apartment – here’s they are furniture and you can view them through a lens to recreate the 2D painting. 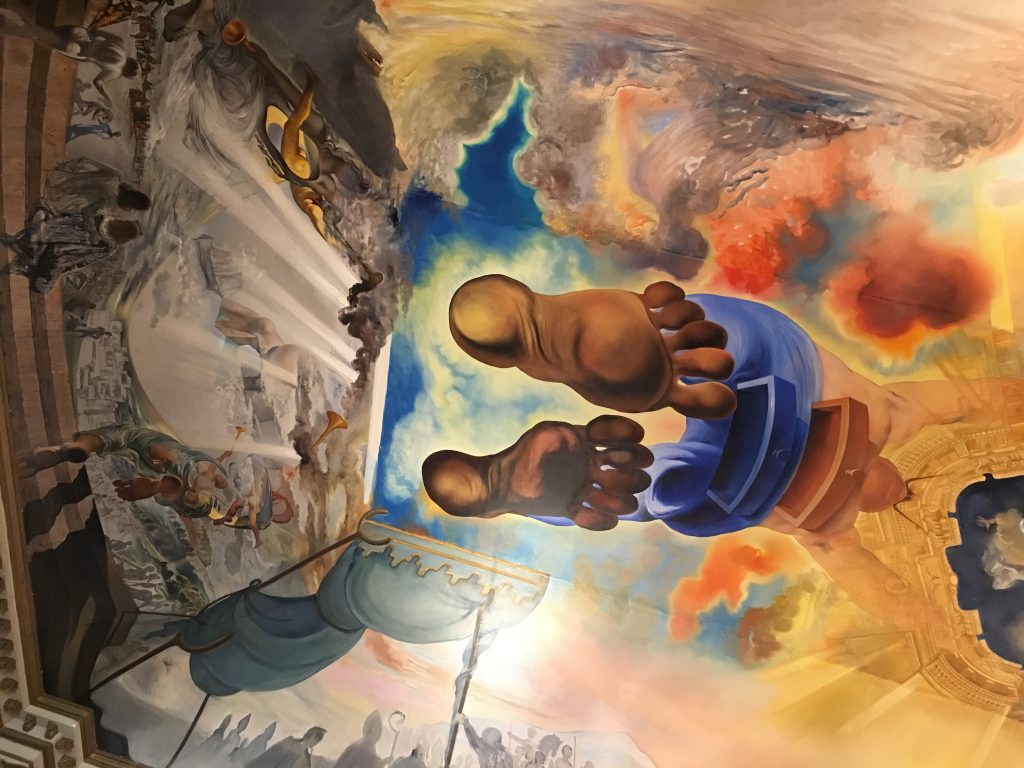 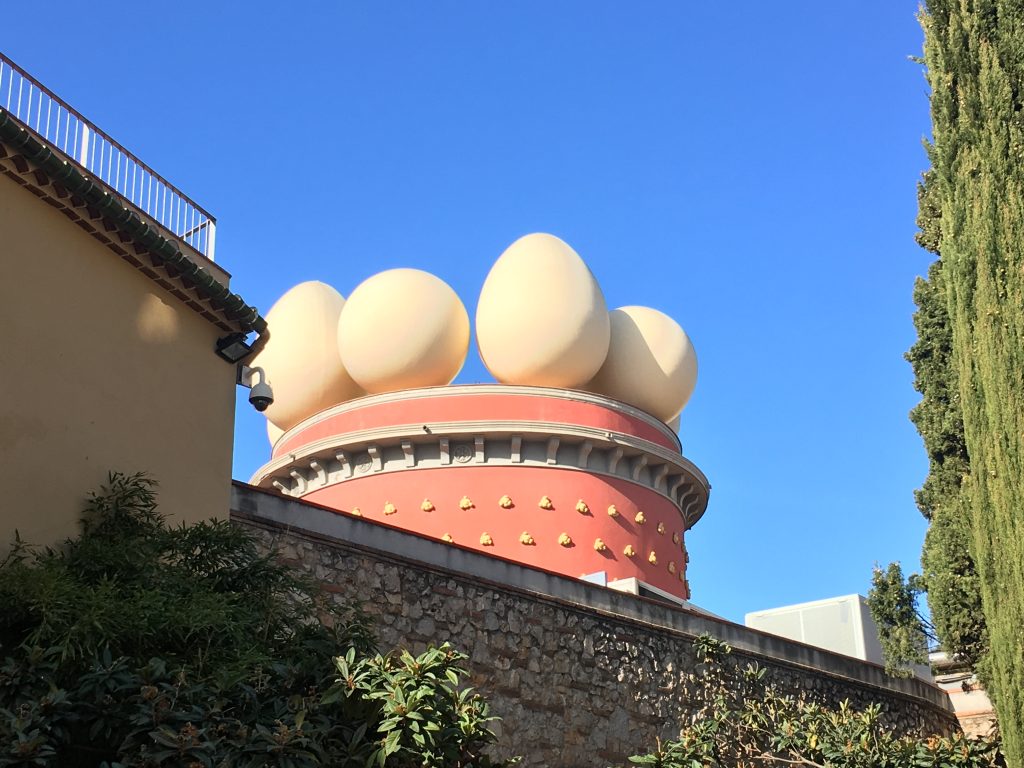 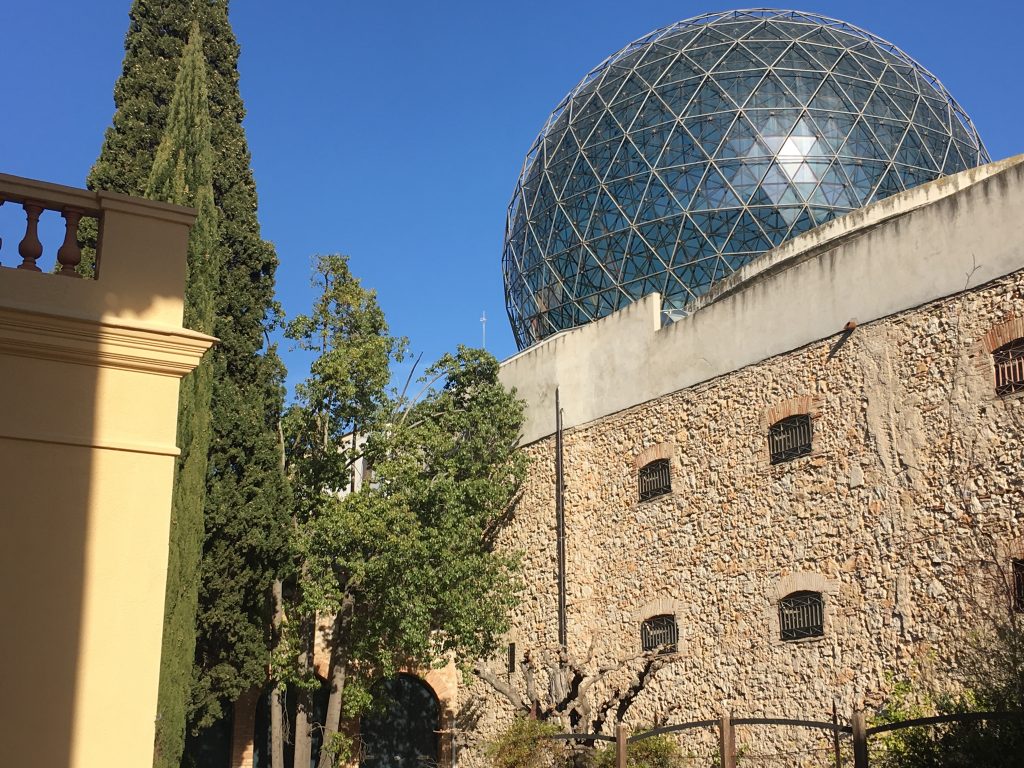 After overdosing on Dali’s works we went up the hill to the fort – the Castell San Ferran. This is the largest bastion fort in Eurpoe and really is enormous. You can walk the path around the outside of the walls for free, but we decided to go inside and we’re pleased that we did. However we had a bit of a disagreement with the woman in the ticket office who wouldn’t let us have an audio guide because it was 1 hour long and she was leaving in 50 minutes. We couldn’t persuade her that we would get back in time and so we ended up wandering around wishing we knew what we were looking at. 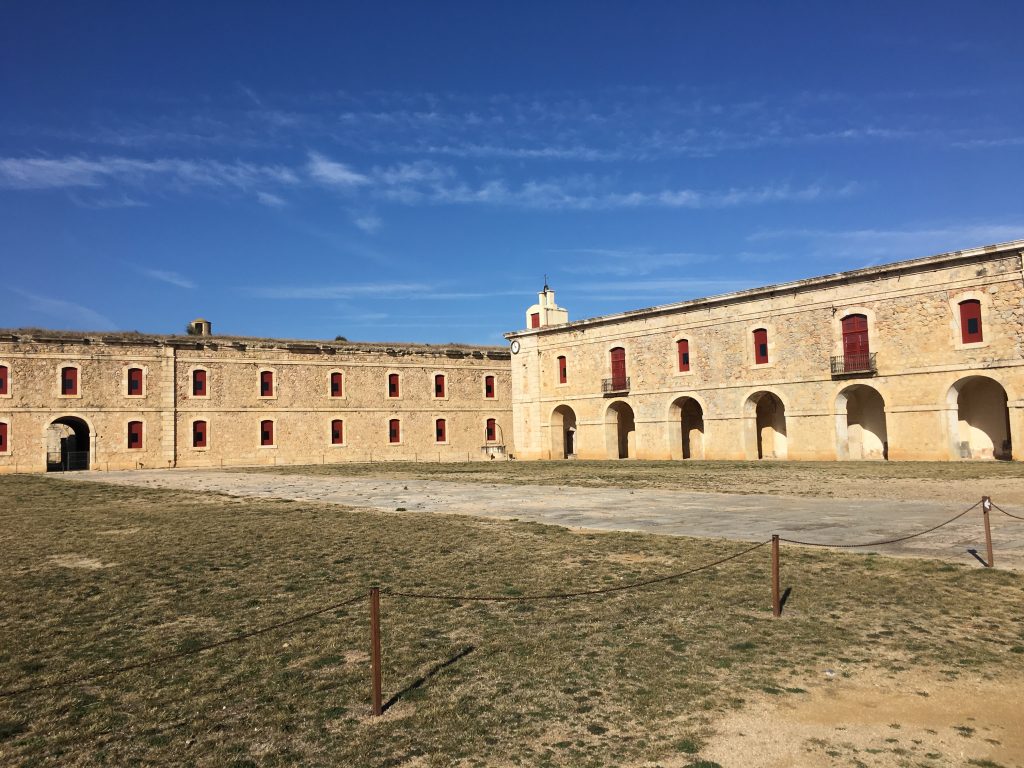 The huge courtyard of the fort 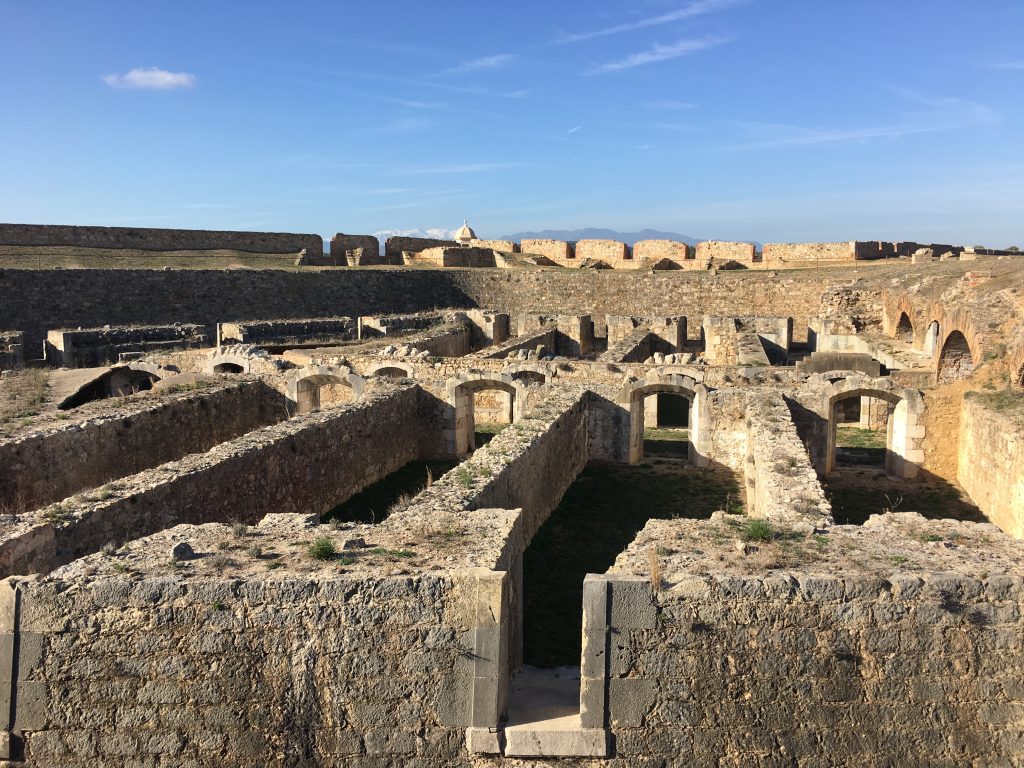 Looking down into the warren of barracks 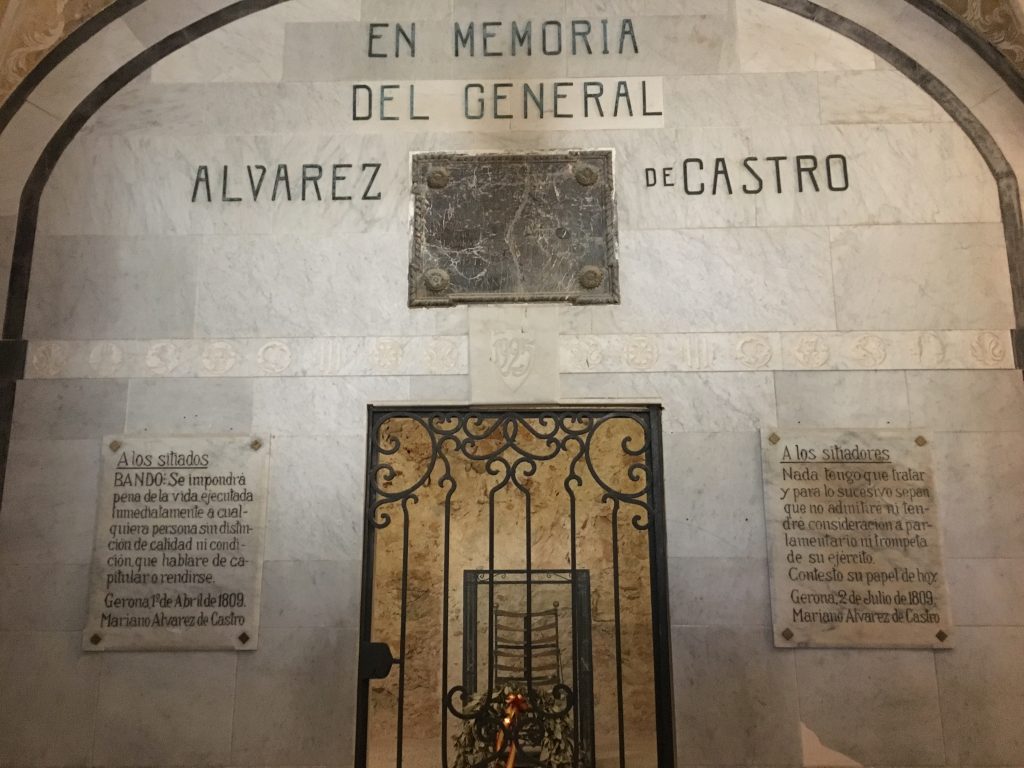 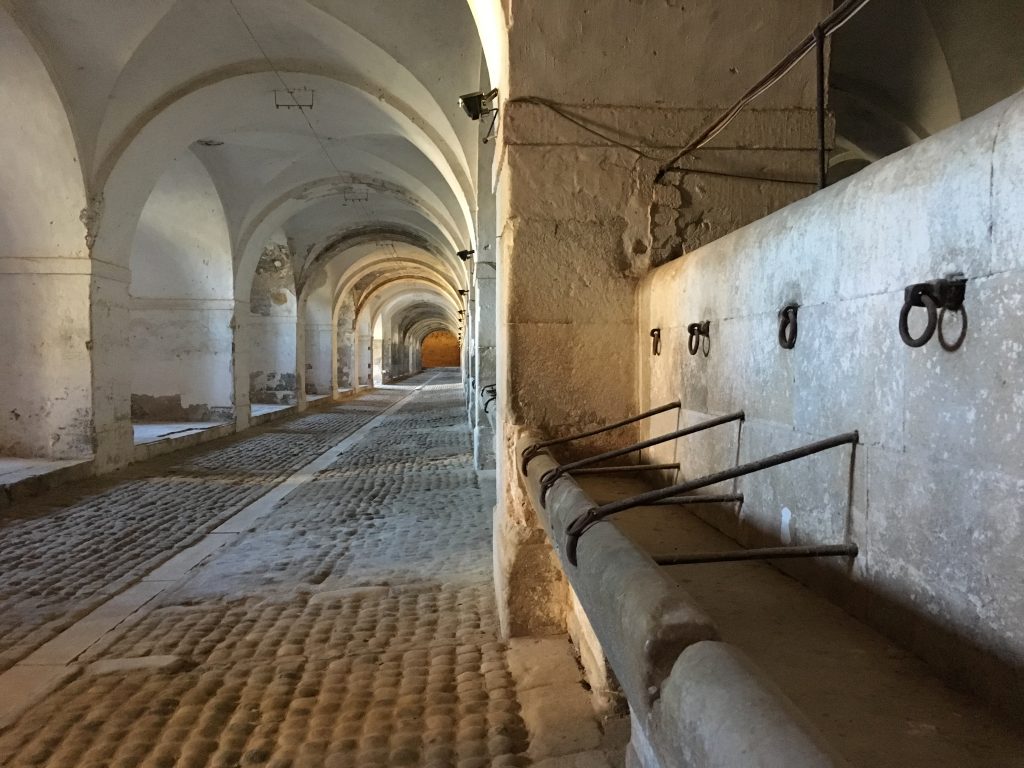 The stables went on forever