From the Verdon Gorge we had decided that our route to Italy would be along the coast rather than through the mountains. This might have been the wrong decision. As we dropped down towards the French Riviera we came across traffic, other vehicles in abundance. We haven’t encountered much heavy traffic in any of the non UK countries we have visited and we don’t like it.

The traffic was orderly and polite. In the filter lanes each vehicle was being scrupulous about making a gap to let one, and only one, car in. In the UK there would have been passive aggressive avoidance of eye contact as people either didn’t let any cars in or tried to sneak into a gap that had been created for the person in front. It didn’t matter how orderly it was though, if we had to do this all the way to Italy it was going to drive us bonkers. By avoiding toll roads we would end up driving through multiple busy built up areas, so would we be happy to spend the money on toll routes? The clincher was when the sat nav told us that a three hour journey by toll road would be 7 hours by alternative routes. That was it, we were paying the money and getting out of here.

So we made our decision. We had overnighted in Carros, a fortunate find inland from Nice where there was a large carpark for the rather smart village where everyone dressed impeccably. From here we drove via the Norauto store (similar to Halfords) where we picked up snow chains and a spare bulb for our headlights, to the autoroute. And then we drove. 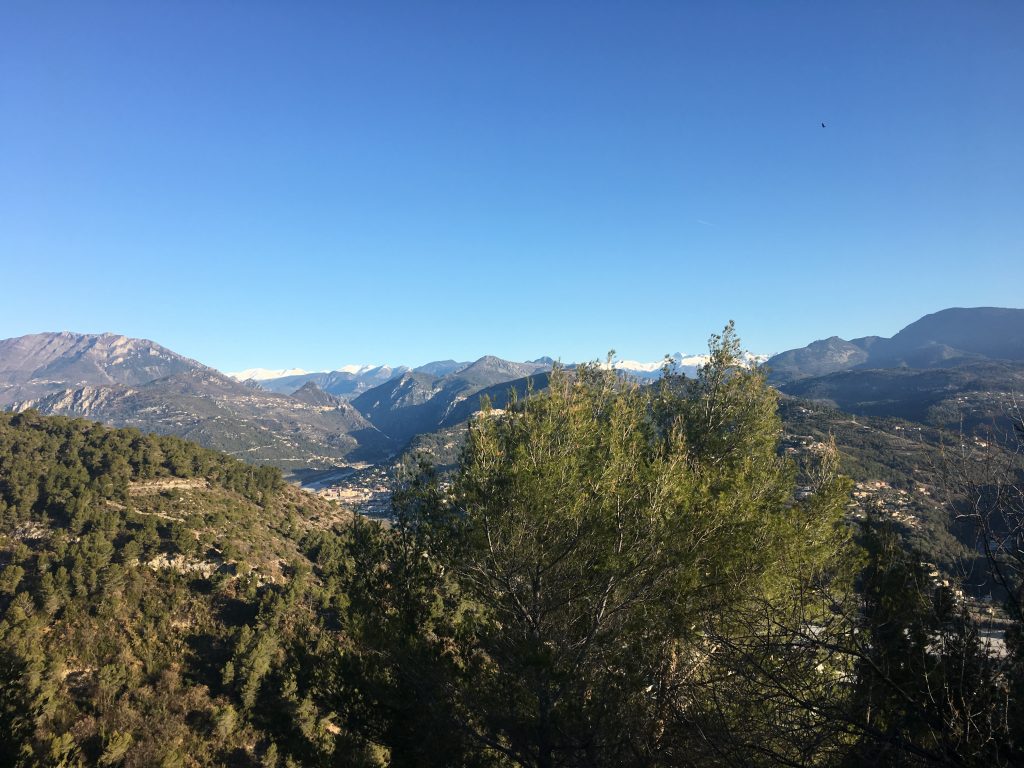 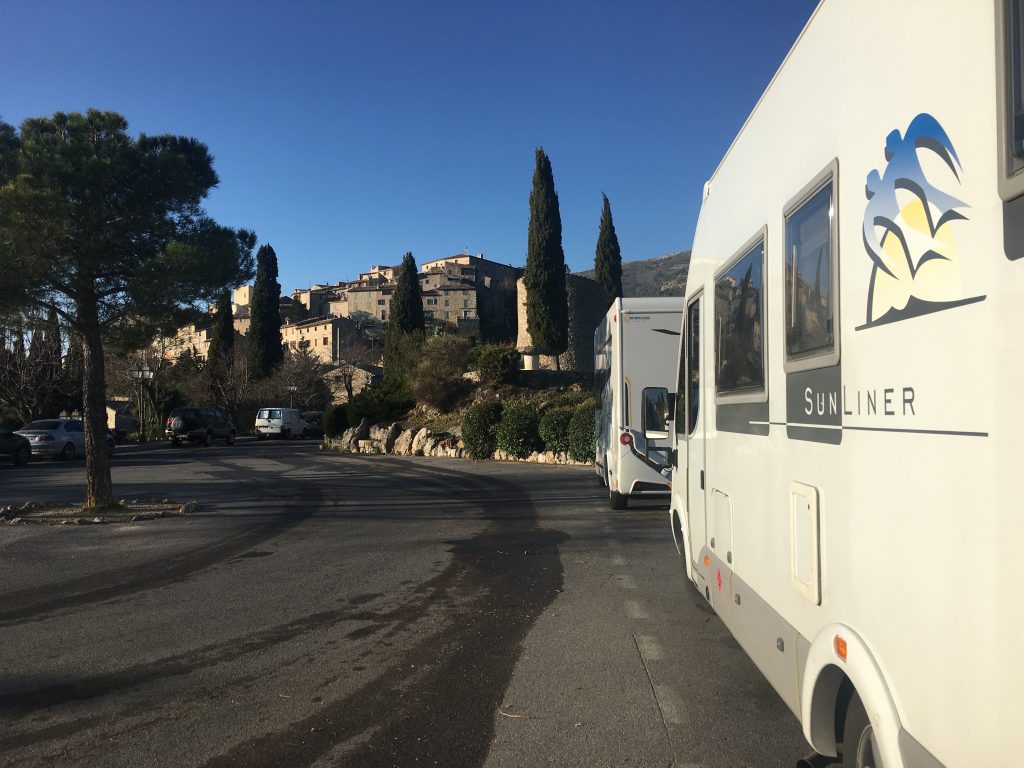 The hill-top village of Carros

At one point Paul claimed it was boring. I paid little attention as for once I didn’t need to be studying the sat nav to ensure that we took the right exit off a roundabout or kept right at exactly the correct junction. Boring was good. We passed Monaco, and through the border to Italy. The autostrada took us above the small towns with houses painted in sunset colours of gold, ochre and dark pink that occupied the steep sided valleys of the Italian Riviera. When we had to leave the toll road we had relaxed enough to be ready for supposed mad Italian driving. We didn’t see any extraordinary driving antics or even hear the toot of a horn, but the parking habits were interesting as cars fitted themselves into any possible space in any possible orientation. 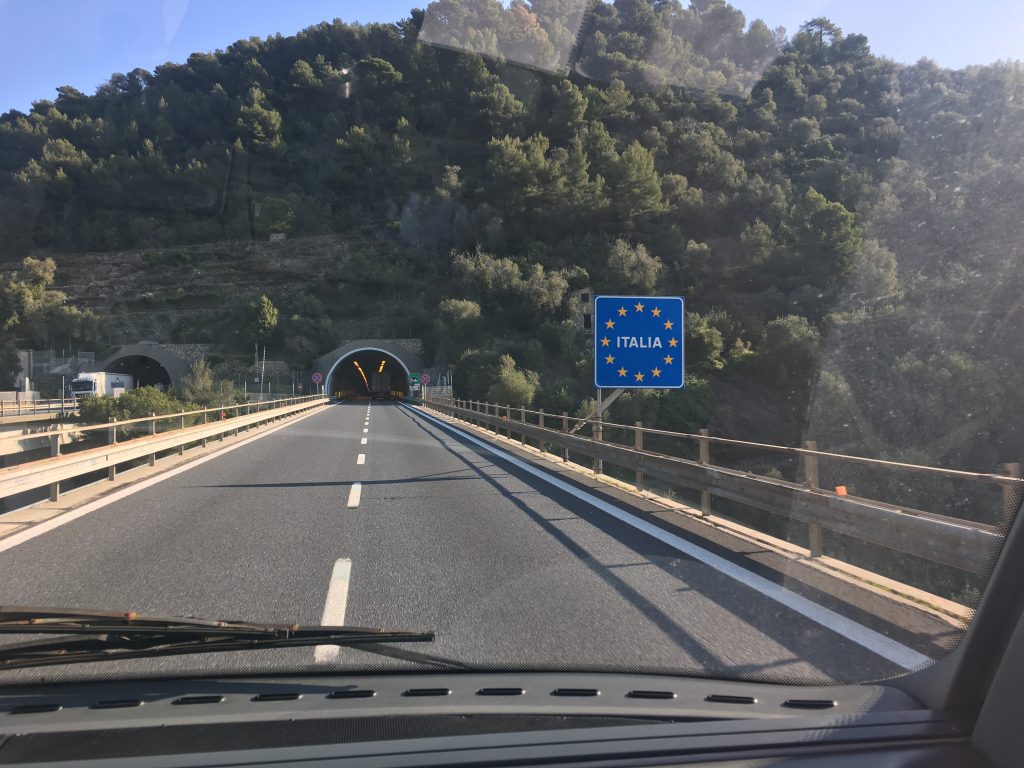 Here we go, another country

The smaller roads took us up through towns and villages towards our parking spot. The roads were being resurfaced and their glistening smooth blackness was very welcome. Unfortunately the carpark was also being resurfaced which meant no parking! What a shame, we had really wanted to spend the rest of the afternoon walking down to the coast from here.

A bit of a rethink and search on various apps led us a few km away to an alternative parking spot. This wasn’t so well placed, and walking from here wouldn’t have taken us anywhere particularly scenic. We searched for other spots but couldn’t find anything close enough and suitable so we ended up sticking where we were. A bit of a disappointment. To add to our misery the carpark, which had no prices displayed, charged us € 16 for the privilege of staying overnight with no services. And then the weather took a turn for the worse.

In a bit of a gloomy mood we decided that we would head a bit further south to escape the rain. Portofino, the Cinque Terre and other delights of this area would have to wait. We were setting our sights for Tuscany.