With the sun still shining brightly we moved on from our spot near the lake. We wanted to walk in the area at the mouth of the Verdon Gorge and only had to move a few kilometres to park on a layby just north of the Pont du Galetas. It’s a popular spot with people stopping to photograph the Verdon Gorge. The turquoise waters were so beautiful that we wished we had our kayak so that we could paddle up the gorge, but of course it’s back at home. We didn’t need it on a ski trip! 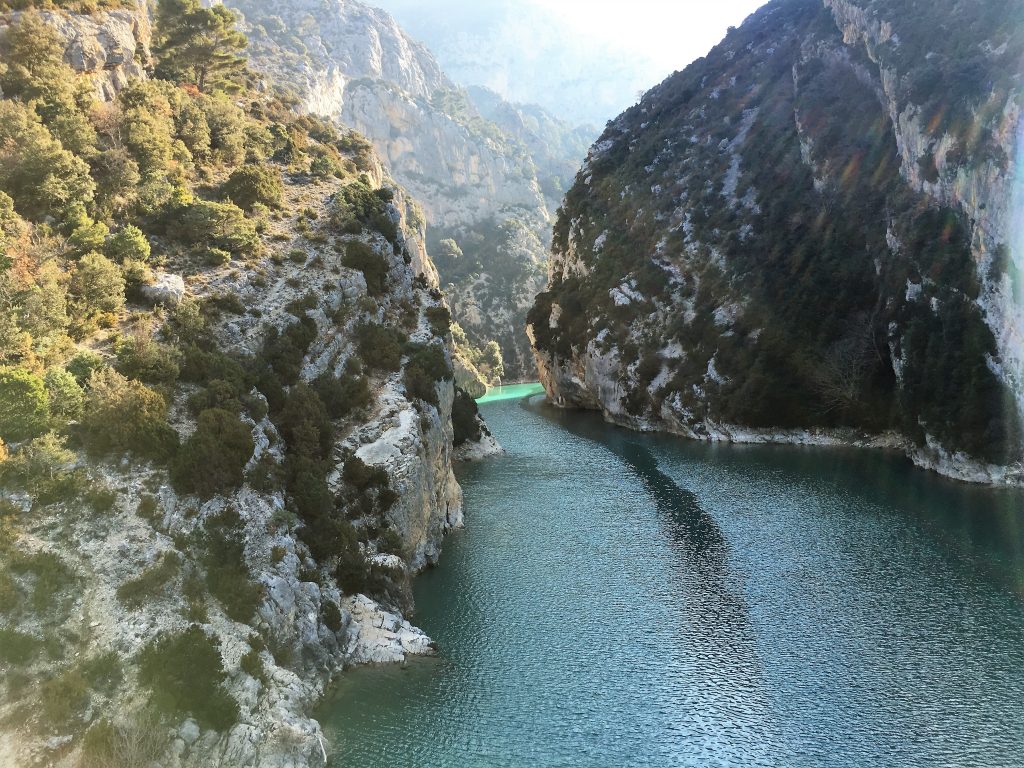 The entrance (or exit maybe) of the Verdon Gorge

So instead we made our way up a path to wander around the cliffs of Verdon. The path starts almost opposite the parking, past a white painted barrier into a dry and eroded gulch that slowly ascended up to the D952 road. Crossing this road took us onto the circular part of the walk where we took the right hand fork to start with, climbing up to a path that traversed above one cliff and below another. We had spectacular views of the lake to once side of us and were treated to the sound and sight of several sea planes landing and taking off. At first it was easy to forget that we were above a cliff, the path was set back amongst pine trees and scrub, but as we rounded the corner and got our first glimpse of the blue thread of the river far below us it was difficult to forget. We could hear the sound of excited children on a boat trip, and the occasional car or motorbike travelling along the road. In the background was the low thunder of blasting at a nearby quarry. Every now and again the drop off to our right was revealed to us in all it’s vertigo inducing glory. 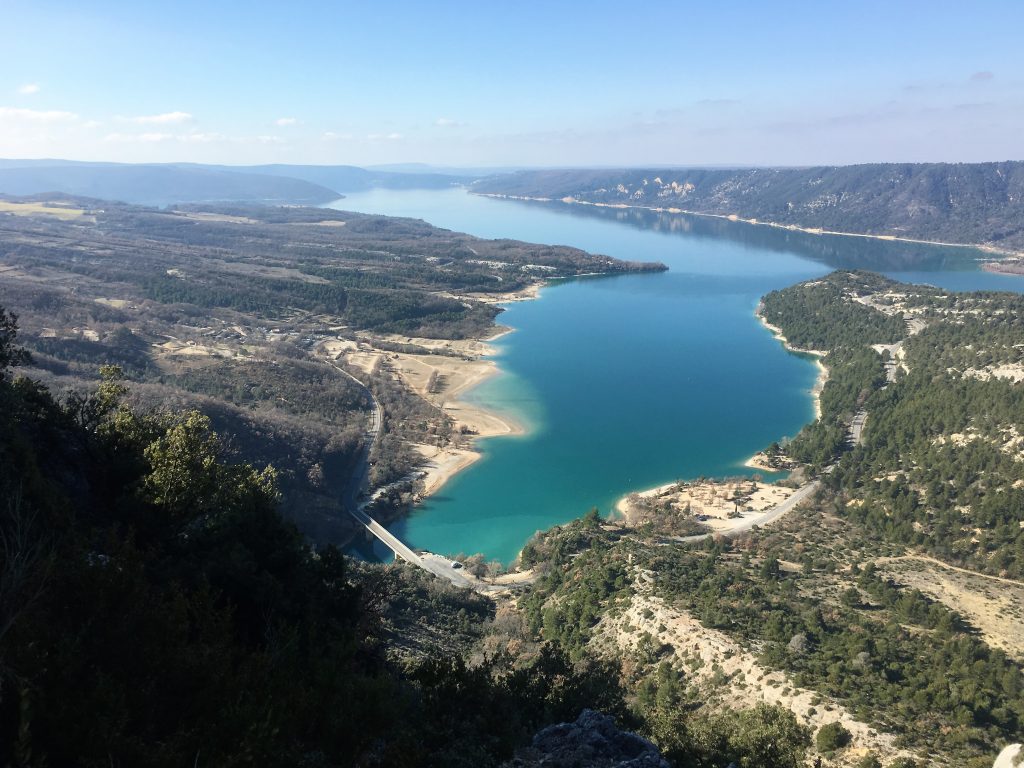 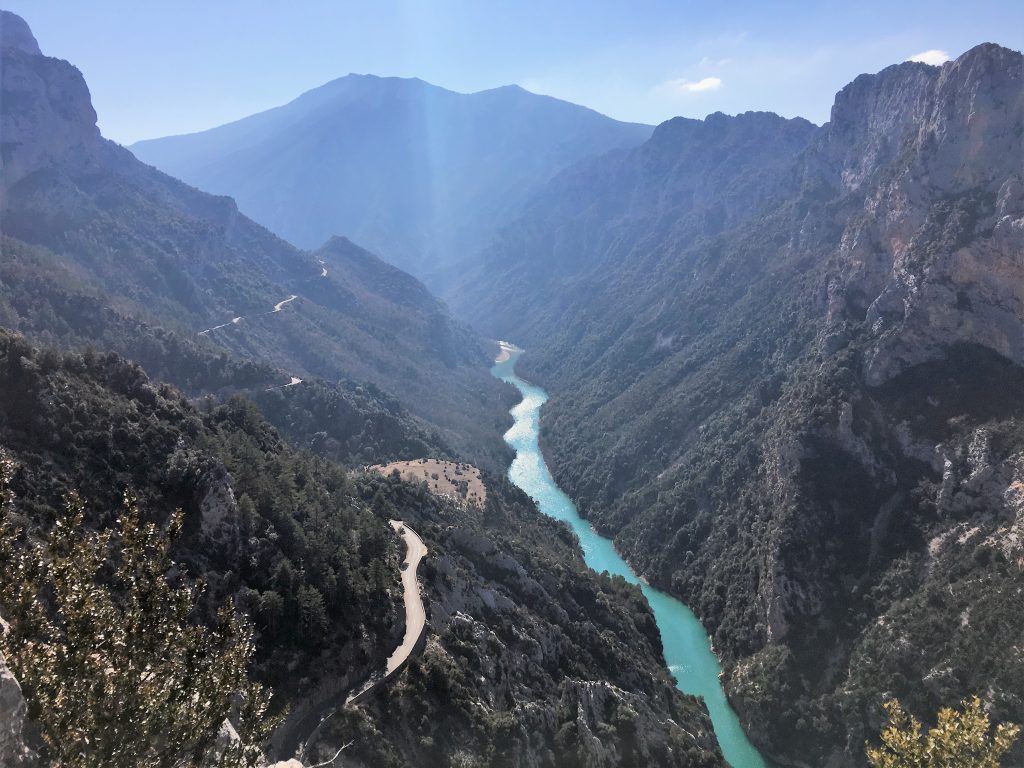 Looking down into the gorge

After a little while the path turned away from the gorge and climbed up through the pine forest taking us to the Col de Plein Voir at the top of the cliffs where the pine forest gave way to scrubland and the views to the north and west stretched on for miles. We were tempted to walk further along the top of the gorge, but this would take us out of our way, so we contented ourselves with a short climb up to the edge of the cliff to watch the vultures circling below before we turned back and walked under pylons along the GR4 to the Col de l’Ane where we descended back towards our starting point. 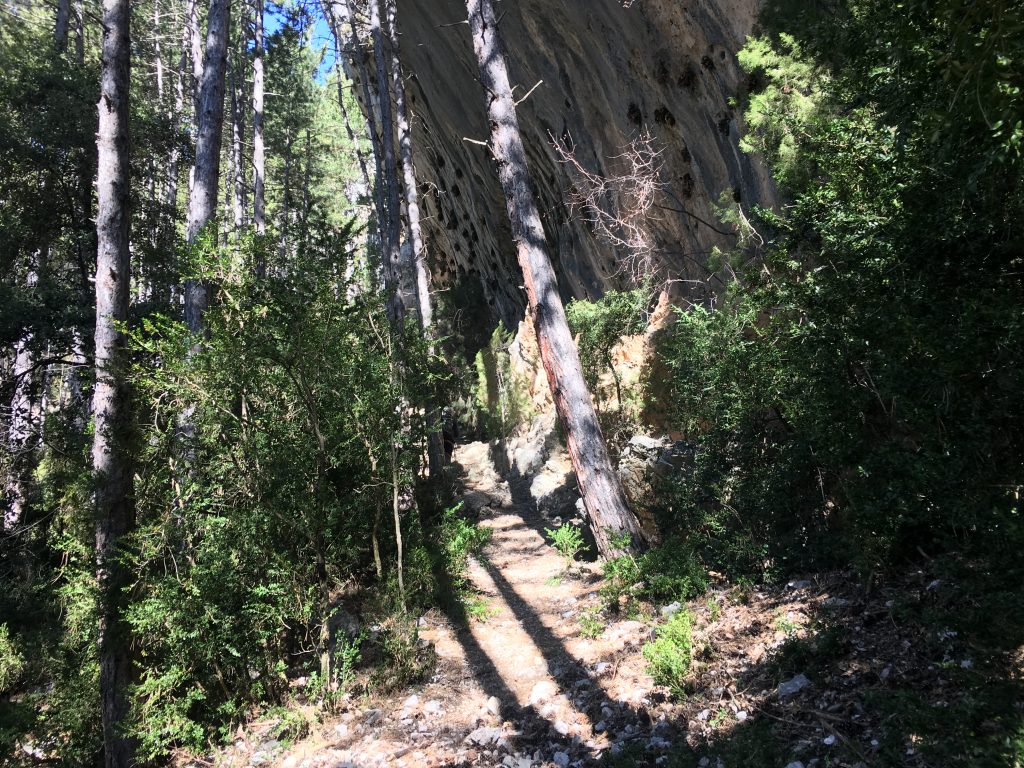 Ascending through the pine forest under more cliffs 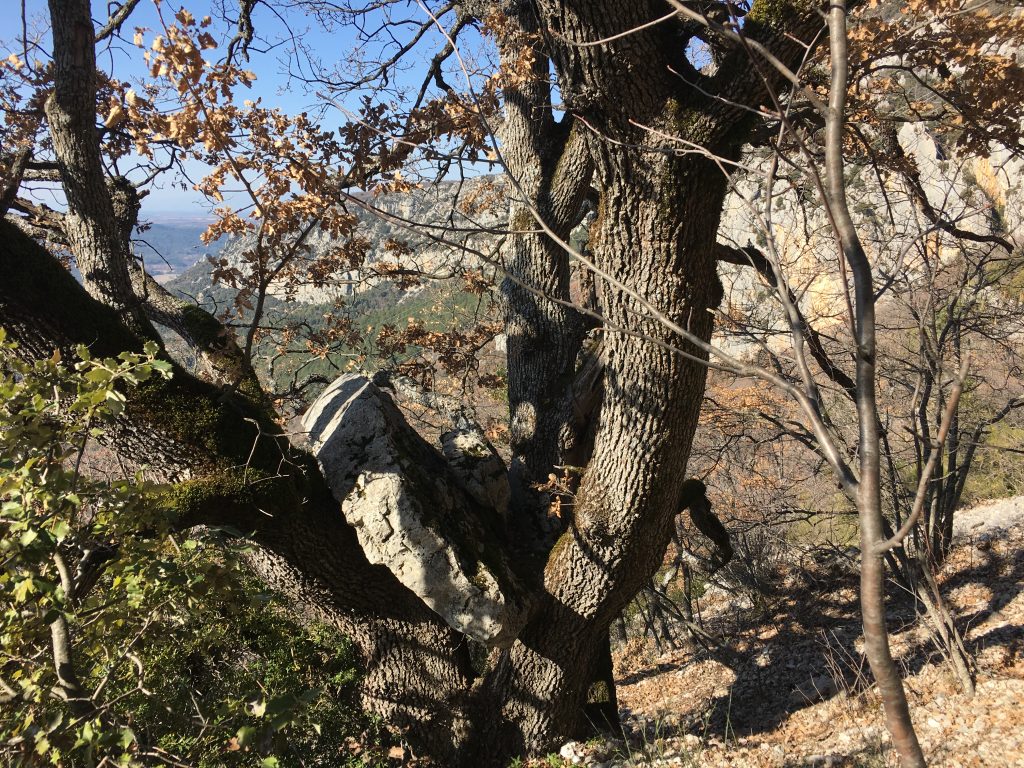 Rock caught in a tree.

Having climbed about 700 meters in warm spring sunshine we were hot and sticky by the time we reached Bertie. It was tempting to stay where we were for the night and drink in the views of the lake, but our water tanks were getting low and we really fancied a shower, so we moved on to the paid aire at Moustiers-Sainte-Marie.

Much to our disappointment the machine at the aire wasn’t working. This was fortunate in one respect – our parking was free – but sadly it meant that we couldn’t get a jeton (token) to get water. A slog of a walk uphill to the tourist office (not that bad, but our legs were tired) revealed that they couldn’t help us. They didn’t have a supply of jetons and nor did the Mairie; they were waiting for someone to come and fix the machine. We weren’t desperate enough to take the water from the cassette rinsing tap so had to content ourselves with a stand up wash in what remained of Bertie’s tank water. Our standby 20 litres of water came out of the garage for drinking and washing up.

The parking at Moustiers was really pleasant, in direct sunshine (it might be too much in summer) we could chill out until sunset. Above us we could see the town in it’s spectacular setting below the limestone cliffs, with the church high above the town perched on a rock outcrop and a bright star suspended between the cliffs. Parascenders were gently wafting around the cliffs and coming to land on the field just below us.

Supposedly the star was placed between the cliffs in the 10th century by a crusader who was giving thanks for his safe return. How he got it there I don’t know, but this star is a replacement, put into position by helicopter in the 1950s. 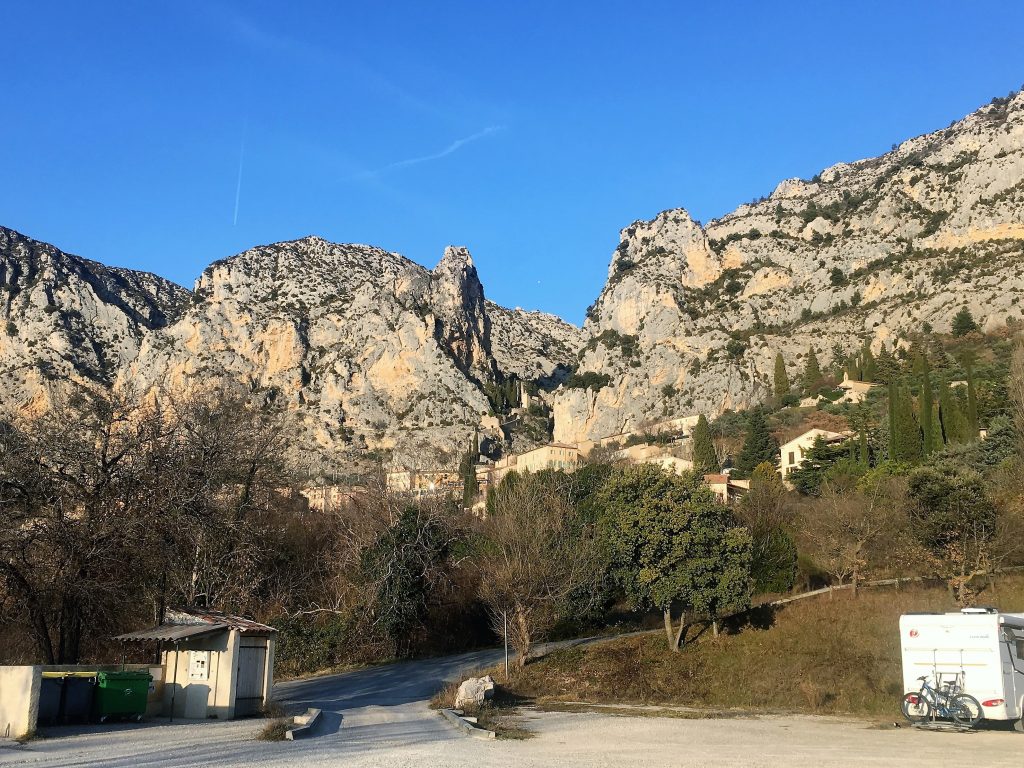 The following morning we popped up to the town to take a closer look. We explored the streets of cafes and artisan potteries that were open despite it being low season. Crossing the river we made our way up out of the streets and onto the rough stone steps of the path to the Grotte Sainte Madeleine and then further around the cliffs to the church we had been able to see from our parking spot. Here a fragrant whiff gave away the presence of a small herd of Ibex wandering the cliffs above the church. They were pretty tame, happy to pose for the cameras of tourists. The views down over the roof tops of Moustiers made the town seem more Italian than French, with the Romanesque tower of the central church, tall cypress trees, stone buildings and clay tiled roofs. We took a better made path back down to the town, stepping on limestone cobbles worn slick by the feet of many passing tourists and, I imagine, a few pilgrims. It’s such a nice little tourist town, definitely worth a visit. 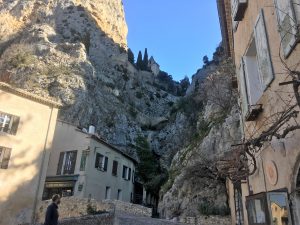 Lookin up the ravine from town 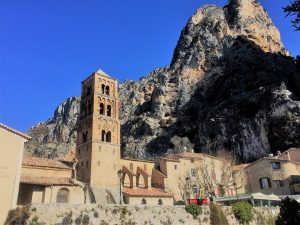 The church in town 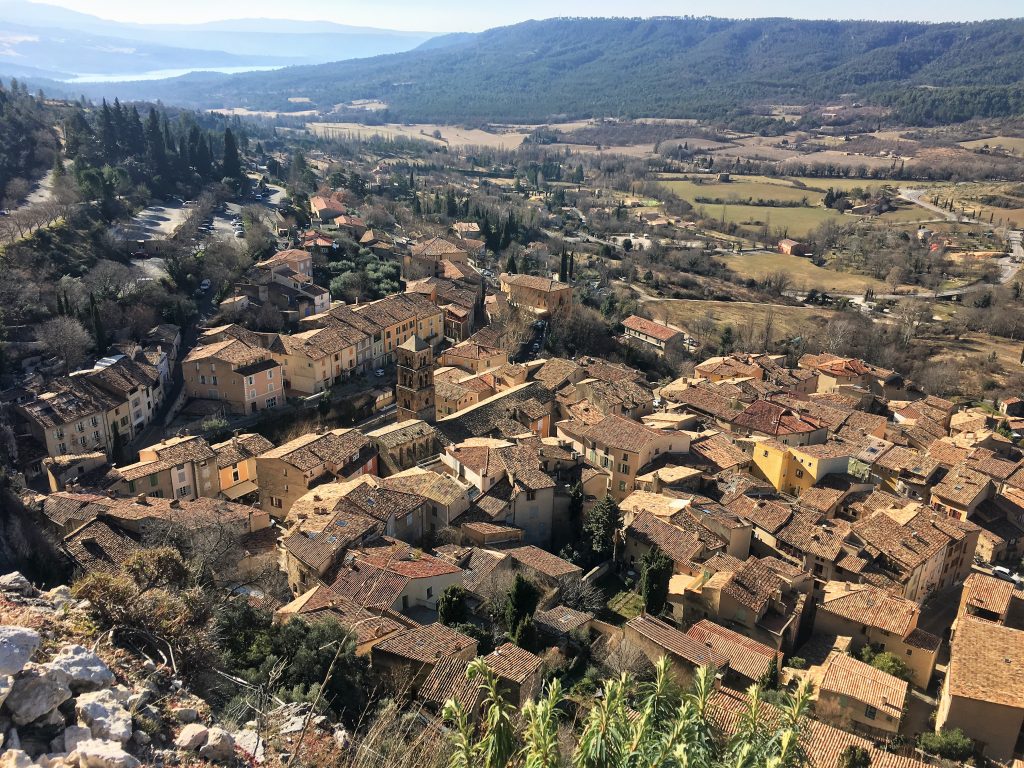 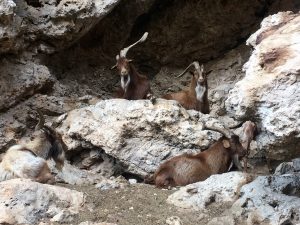 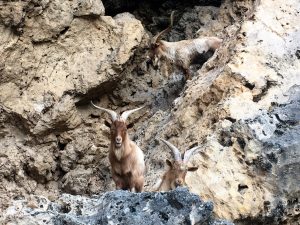