We were still in need of water and the situation was getting desperate as we opened our emergency stash. No one had been to fix the machine at Moustiers so we’d have to move. Our original plan had been to stop at Point Sublime for a couple of nights and then head on to Castellane, but we resigned ourselves to a bit of doubling back as we followed the D952 along and above the Verdon river. It’s a road that never gets boring so driving it a few times was not going to be a chore.

So we woke up on the morning of the 22th at the Halte Napoleon, a privately owned motorhome stop just outside the town of Castellane and associated with the Museum of the Resistance. It’s pitches are good sized and separated by low shrubs and rough fencing but the ground was very rutted – you wouldn’t want to be parked here if it rained as I could imagine it turning into a quagmire. The deciding factor was price; it’s cheaper than the €9 aire in town at €6.50 plus another €3 for electricity if you want it.

We were clean, our water was refreshed and we had made use of the electricity by finally getting rid of Paul’s beard. The clippers had a strenuous workout cutting through his tough chin hairs, having to do a grade one cut first before clipping as close as possible and then a final shave. It’s never getting to that stage again!

After a fruitless search at the tourist office, who had maps but not very detailed, we finally found an online map of the mountain biking routes around Castellane and plumped for route number 4. Something longish and of medium difficulty, with an ascent all on tarmac and an off road descent. This was our first testing mountain bike outing since Paul trashed his bike in the Pyrenees so we didn’t want anything too difficult. We left the Halte Napoleon to go and park down by the river, only to realise that motorhomes were forbidden, we tried the parking opposite the tourist office (motorhomes allowed but not overnight) but couldn’t fit our bulk neatly into the spaces, in the end we decided to stay another night in Castellane and this time parked in the more expensive municipal aire.

Parking sorted, we were off on our bikes. The route took us along the side of the Chaudanne reservoir before climbing the side of the valley, through the village of Demandelx and up to the Col de Sainte Barnabe. The road was narrow in places but well surfaced and quiet, in the shaded spots frost still rimed the road but in the sun it was glorious, butterflies fluttered and lizards rustled the leaves. 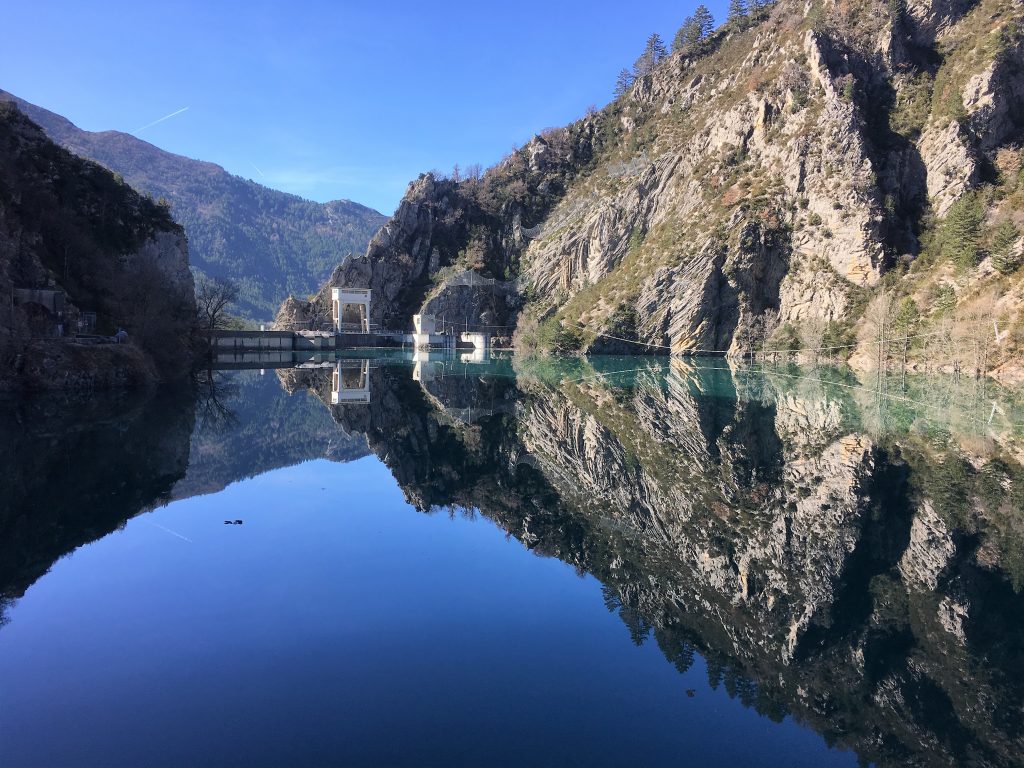 Amazing reflections in the calm water of the Chaudanne reservoir 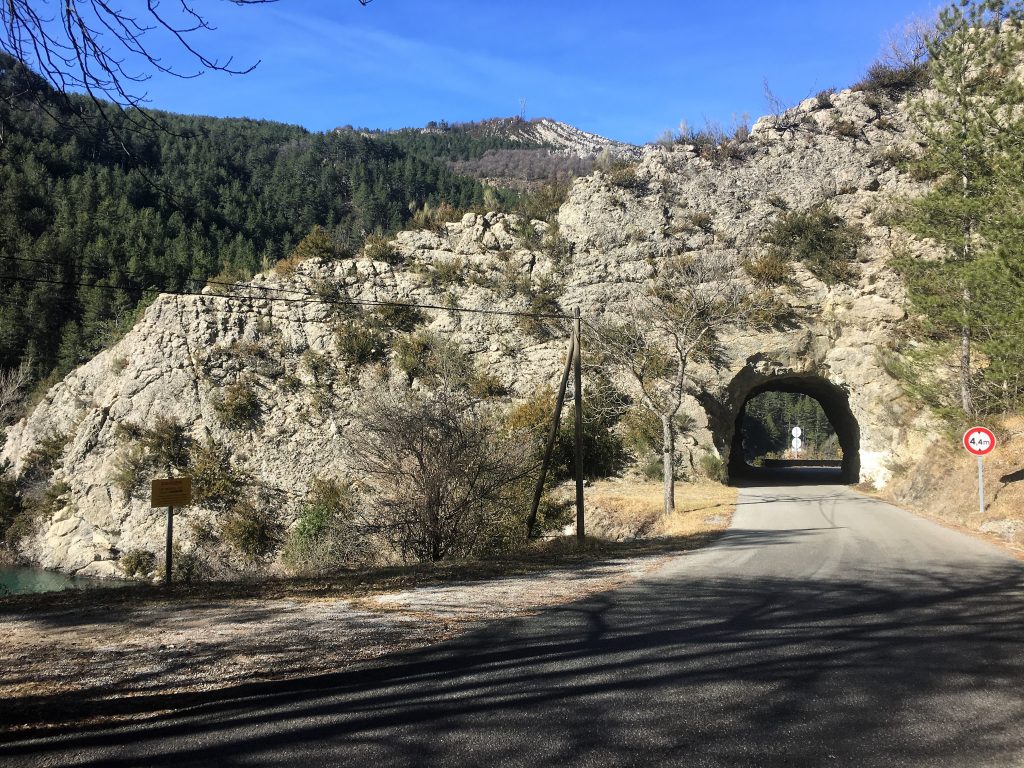 Short tunnels around the reservoir 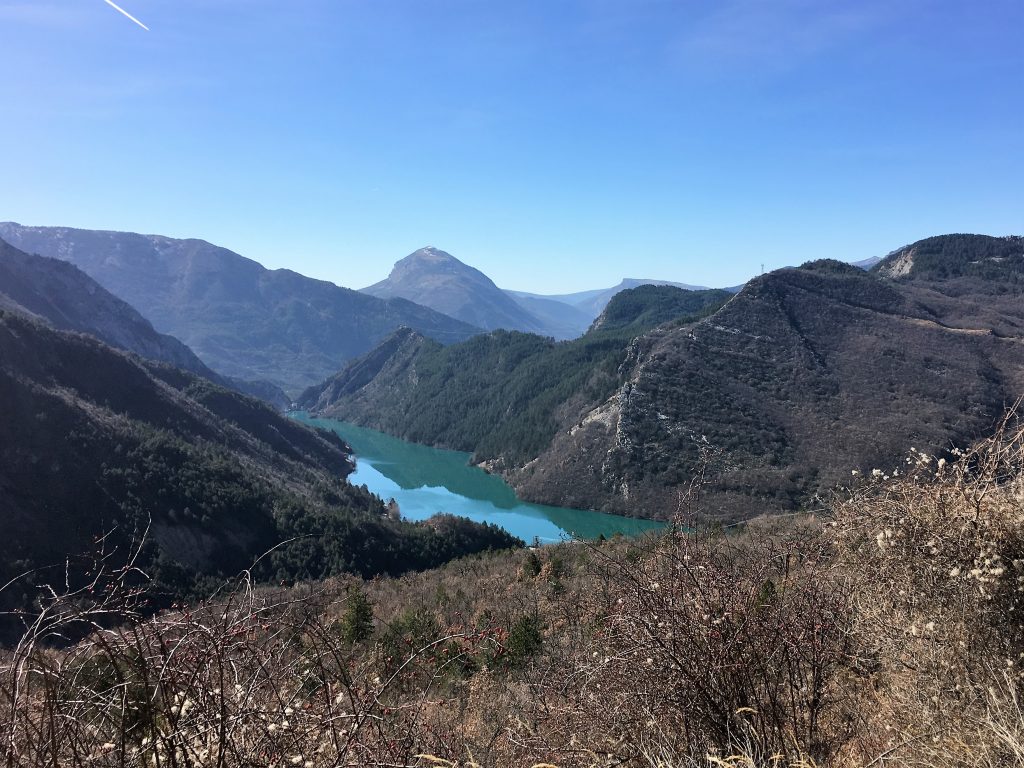 Looking down to the reservoir

I have to admit I found it rather hard going, I’ve never been the strongest at pedalling uphill and Paul had to wait for me several times as I crawled up the hill puffing and panting and occasionally wondering why I was bothering. The last kilometre was the worst as we went past the turn off for our downhill ride in order to get to the Col, my legs saw the promise of a rest and tried to give up. Sadly there wasn’t much of a view from the Col, and there was even a road that continued to ascend to the Vauplane ski area, but I felt enough of a sense of achievement and didn’t need to go any further. 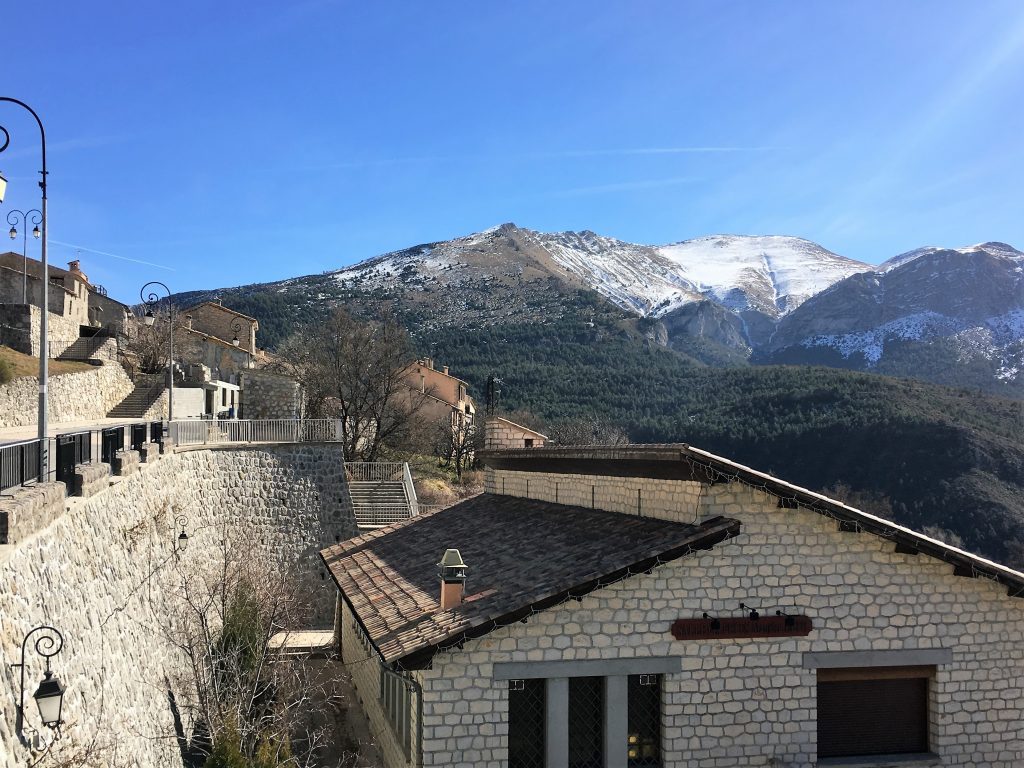 There had been more snow and ice as we got to the final stretches of the uphill, and we’d been able to see some of our downhill path as we rode, it was white and completely shaded by the mountain. We hoped that it was slushy under wheel rather than frozen, but sadly it was like an ice rink. We only managed a few yards before Paul came a cropper as he tried to take a bend and his bike slid out from underneath him. With demonstrable injuries (well a grazed knee) he decided that we shouldn’t continue on this path, so we made our way back to the road and retraced our steps downhill. It was a bit of a disappointment that we hadn’t managed to do the off road section but it was fun speeding down the hairpins. 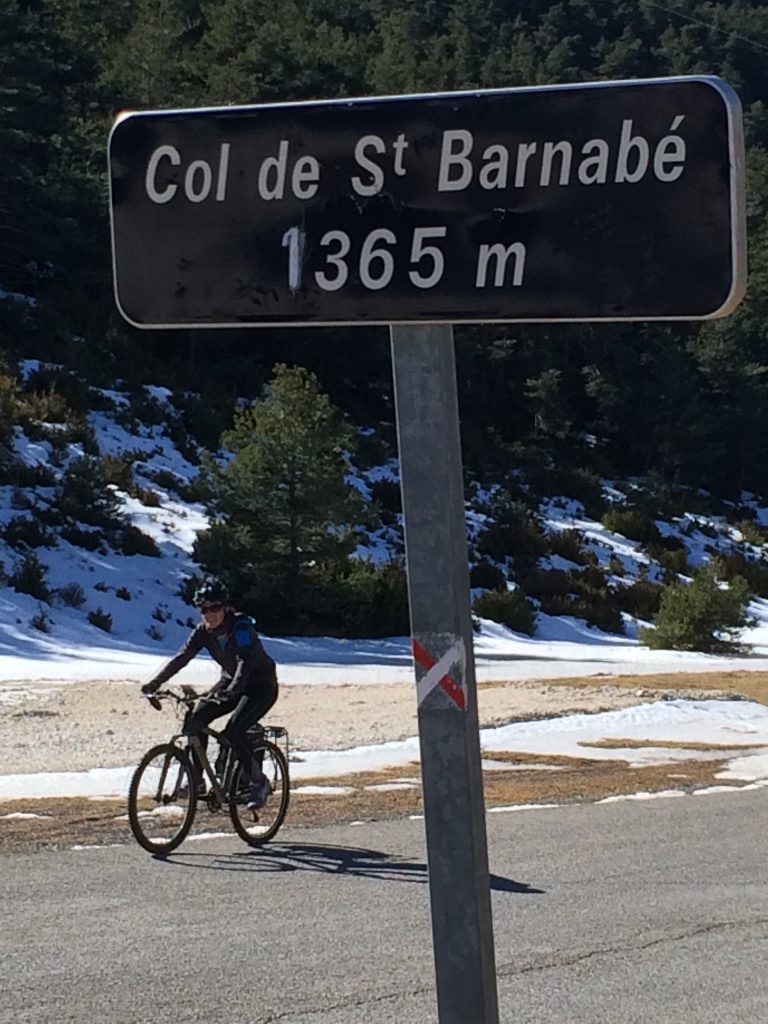 Finally making it to the Col 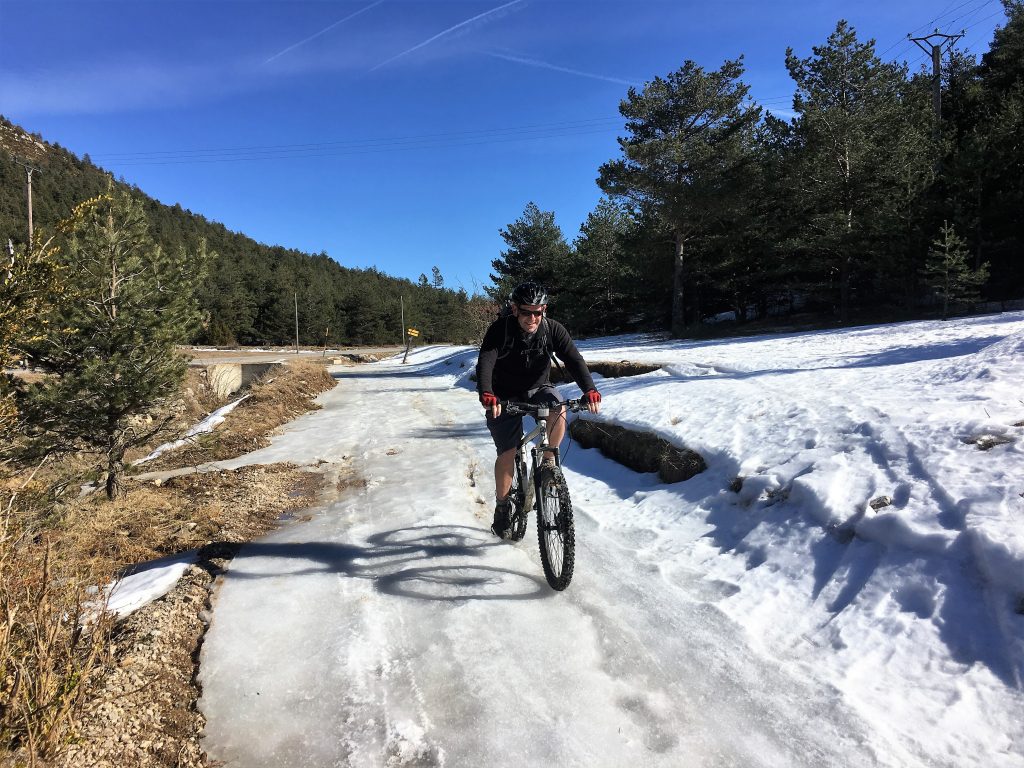 The following day was a Six Nations day, so we had a bit of a wander round town in the morning. I suggested a walk up to the top of ‘The Roc’ which looms above the town, but Paul’s cycling injury needed to be rested, so I left him in Bertie while I did a short loop up to the Chapel and round the remains of the fortified walls before getting back in time for the first match. 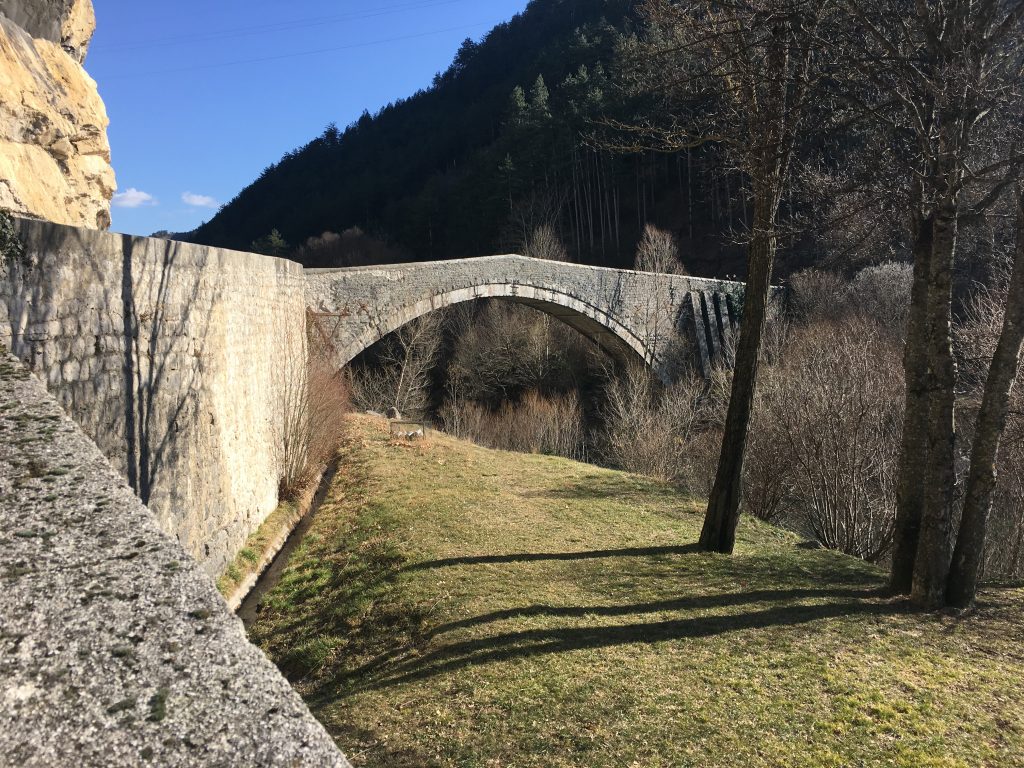 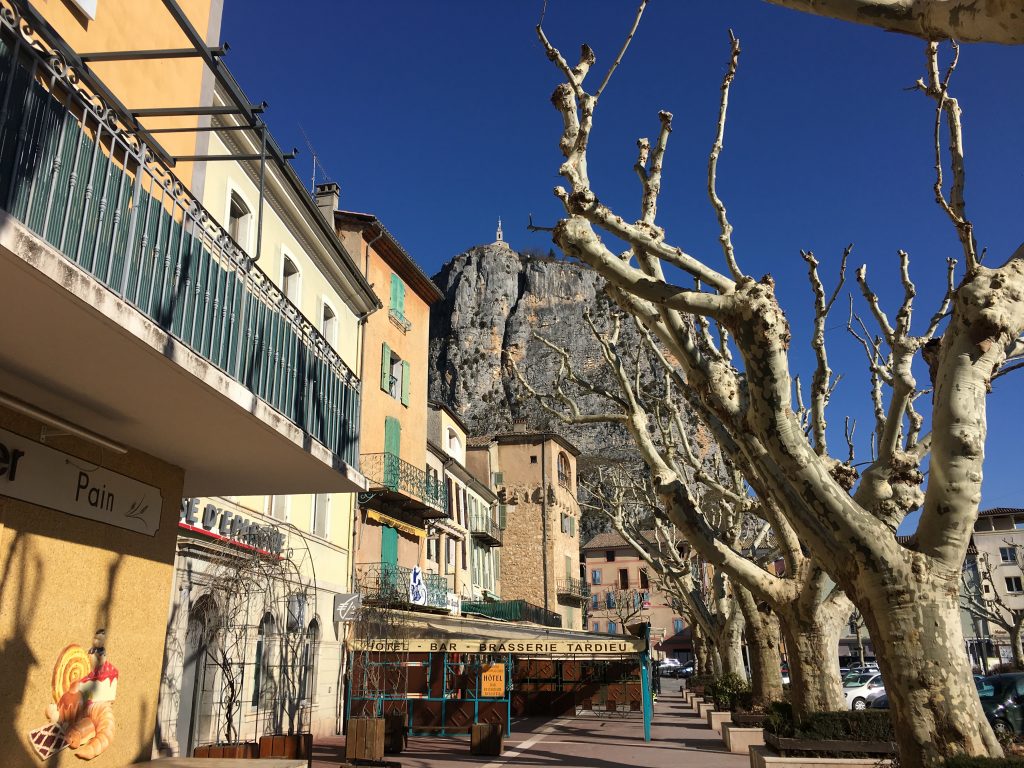 The Roc looms over the town 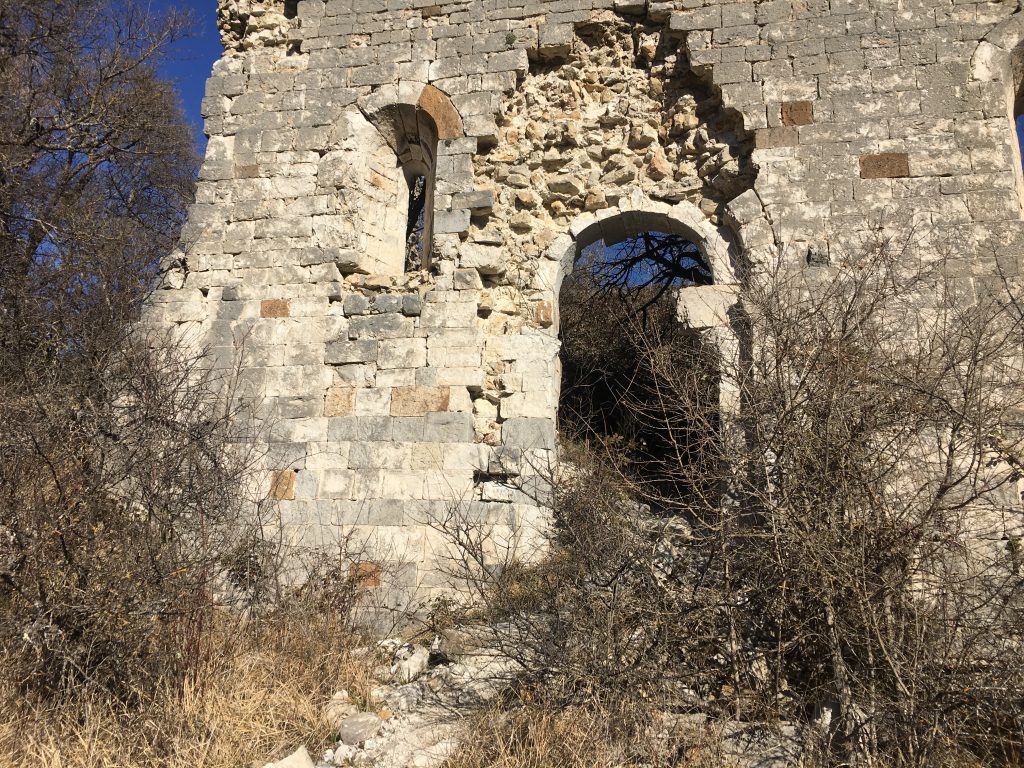 Ruins on the Roc 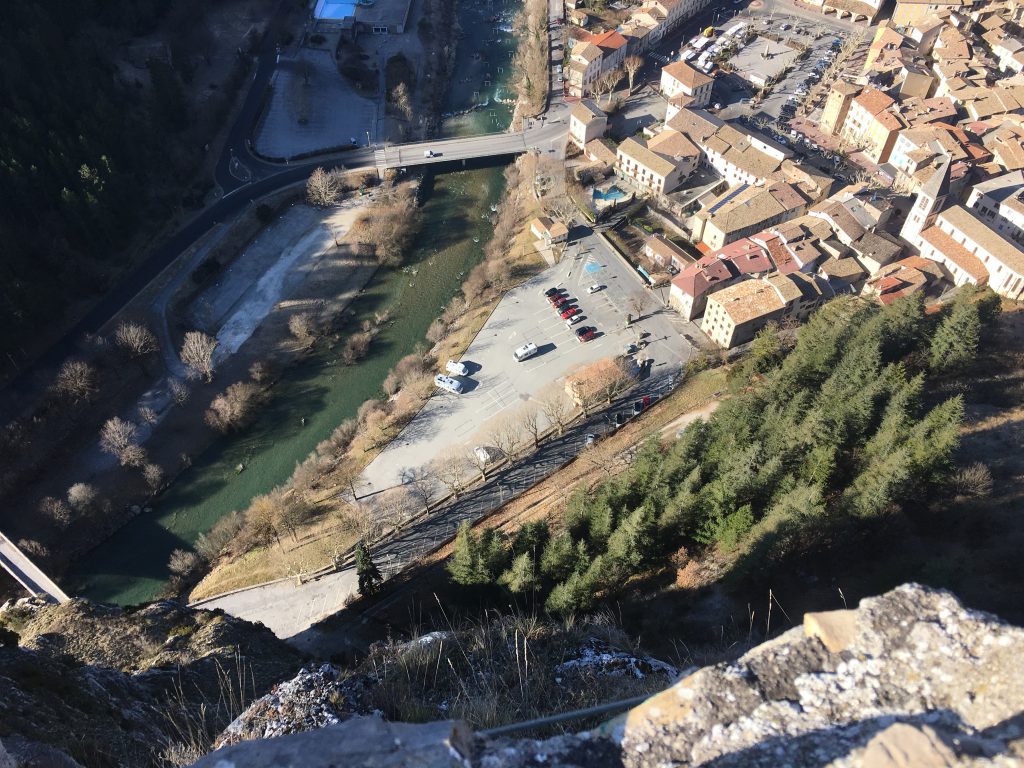 Looking down on the motorhome parking 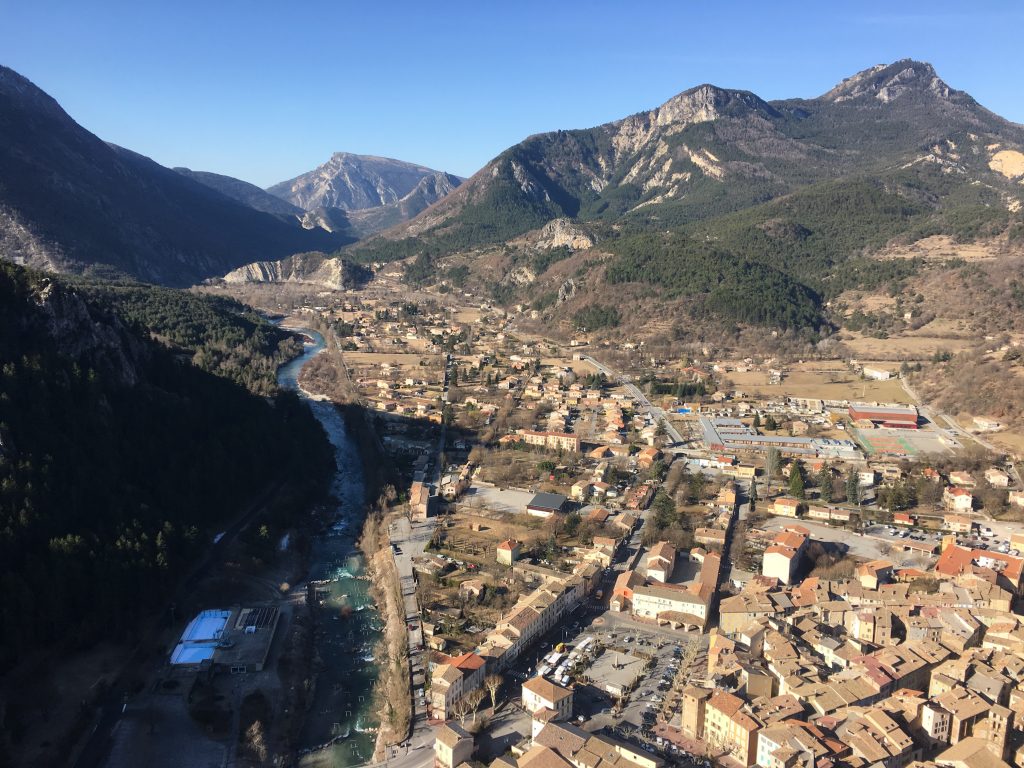 Views of Castellane from the Roc

We toyed with staying another night in the Castellane aire but couldn’t bear to part with another nine euros, so we filled up with water again and moved on to find a free spot with good reception so that we could watch the rugby and stay the night. We parked up in a layby by the Castillon lake with nice views but in the end we decided that our spot was too noisy and close to the road to spend the night. We drove back along the D952 as far as the parking at Point Sublime where we had a perfect spot under brilliantly starry skies.