While we’d been in the Verdon area we had been making plans. Paul’s son (Aaron) had a window of opportunity to take some leave and was keen to come out for some skiing. The recent unseasonably hot weather meant that the French Alps were not in great condition, but the long range forecast had looked a little better in early March so we were heading back north to meet up for some skiing.

We said a sad farewell to the beautiful limestone of Verdon, offering a final toot of the horn as we ventured for the third time through the single track tunnel on the corner of the D952 from Point Sublime to Castellane. We were heading towards Grenoble, using the Route Napoleon to start with – a route taken by Napoleon (no really!) on his return from Elba to regain power in 1815. To make a change from our route south via Gap we were going to turn off at Sisteron and take the D1075 north.

The first night was spent at Laragne-Monteglin, a free aire that was also a truck stop and quite noisy in the morning. It was a last resort as we needed to empty the toilet cassette and the couple of stops we’d tried before had their services completely padlocked closed. This stop at least allowed us to empty our black and grey waste, though the water was shut off. Finding water is a bit of an issue in winter, many motorhome stops in cold countries shut off the water to stop the pipes from freezing.

We had a wander around the town, taking in the wide river Buech but not venturing far down the footpaths. 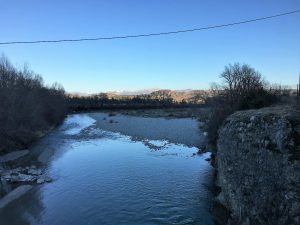 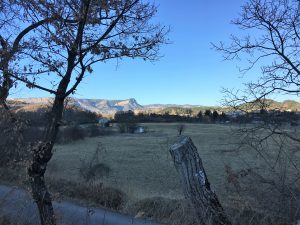 Views to the mountains

The following day we followed the road north, initially alongside the same river. This was a beautiful drive through the Delphine Alps with views of limestone cliffs reminiscent of the Verdon area we had so recently left. The road ascended easily up to the Col de Croix Haute. At 1179m it still only had distant views of snow – showing how warm the weather has been recently. From it’s highest point it then descended down into the valley where we were going to make our second stop at a large motorhome aire near the Lac de Monteynard-Avignonyet. Much of the time the road ran alongside a railway line that would make a scenic journey in it’s own right.

This stop is free out of season, but as expected the services were all turned off. That didn’t bother us though as we soaked up the sunshine in weather that felt more like late spring than a winter’s day. During a mooch around the area we found a map of a walk/mountain bike route around the southern end of the lake. During summer this can be made a circular route with a boat trip back to the start, but this time of year it would be there-and-back. We weren’t too worried though as it was only about 11km each way and on the way it took in two ‘Himalayan’ suspension foot-bridges for a bit of variety. 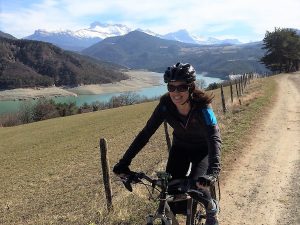 Returning on the easy part of the track 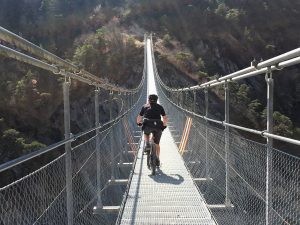 Cycling the suspension bridge. According to the signs it was capable of taking 800 people, but I don’t think they would all fit.

To be honest it was more difficult than it looked by bike, with nasty stretches beyond the first bridge where we had to push the bikes up switchbacks of loose stone and mud. I think I would do it on foot if I was to go back, in my opinion the path was occasionally too narrow to be a shared foot and cycle route, even on this winter’s day we had to dismount to let family groups walk past. It was a nice route though with the blue of the reservoir, the beaches, cliffs and forest and the distant snowy peaks of the Haute Alps. 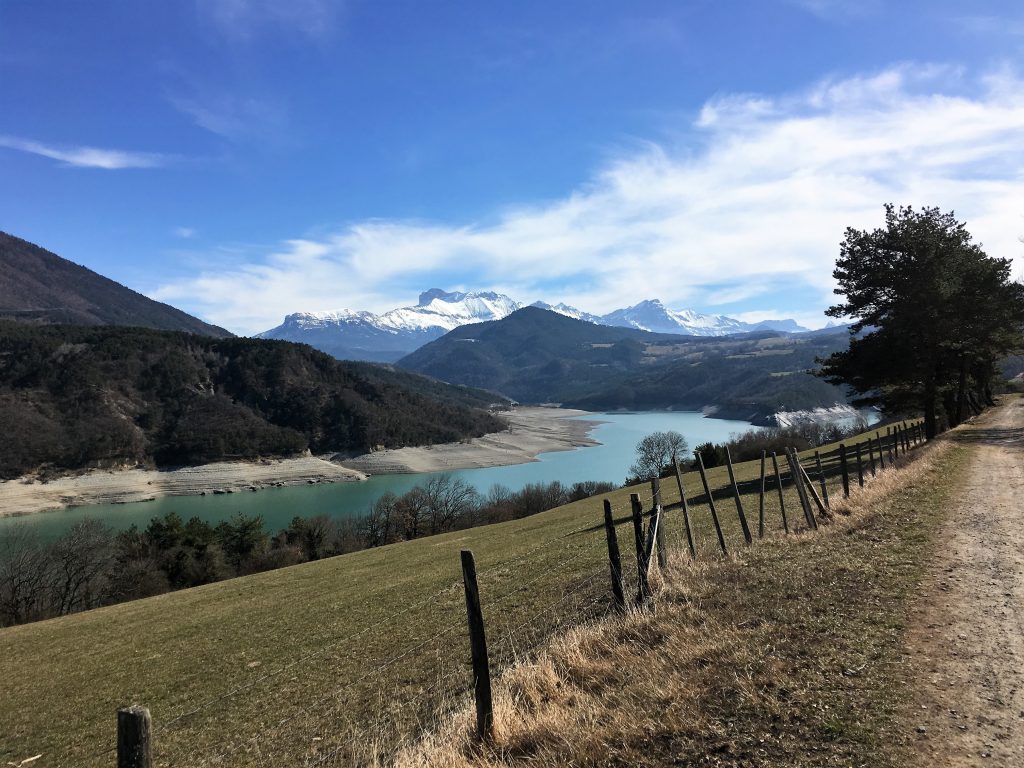 Views across the lake

For the final day we pushed on past Grenoble (which makes it sound like a strenuous affair, whereas it was really an easy drive) and stopped by Lac de Saint-Claire. This little mixed parking area had motorhome services and public toilets and was next to a nice recreational area, but it was also right next to the road. We took advantage of the services (including water that was working) but moved on to find somewhere quieter. A few kilometres down an abnormally straight road was the village of Bourgneuf with motorhome parking tucked in behind a restaurant and church. We settled in with spectacular views across the flat valley to the mountains. 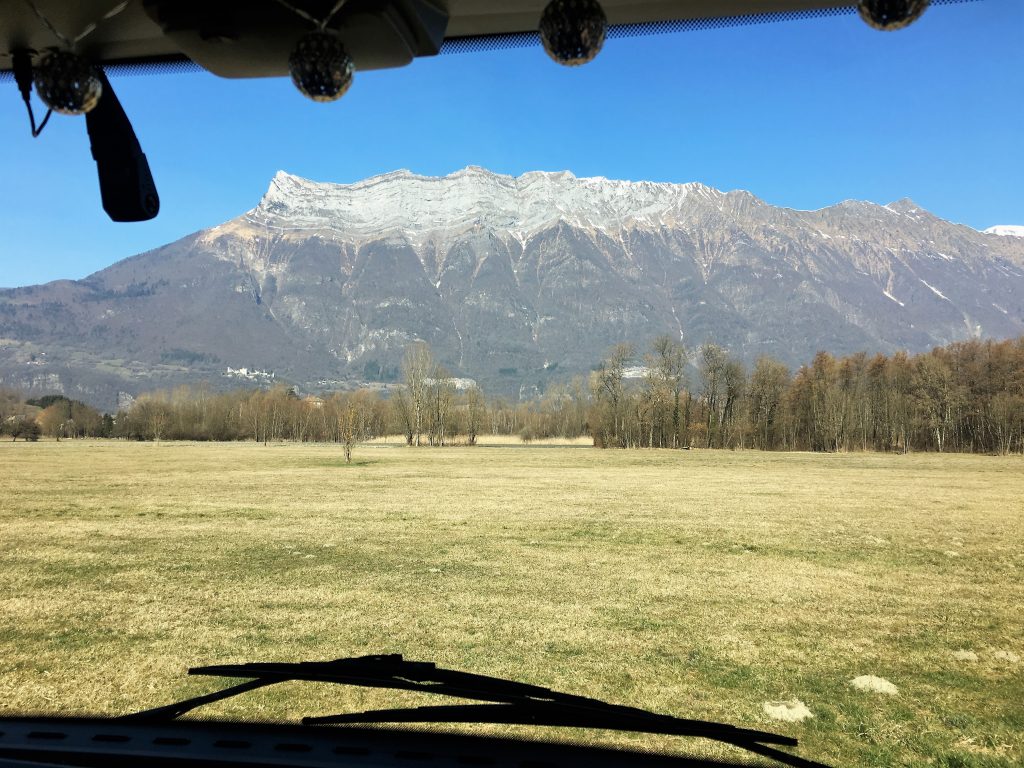 View from our window

The valley was incredibly flat, ironed out by centuries of farming creating systems of fields, orchards and water courses. It was justifiably popular with cyclist who zoomed by on their road bikes clocking up the miles. We had a pootle around on our bikes, with our eyes always drawn to the steep slopes but our legs unwilling to make the switchbacks. Parts of the valley are slowly being turned to housing, with new builds popping up the fields between the old farms and barns. With such amazing views I can see the attraction. 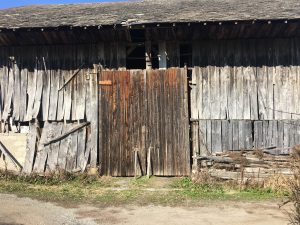 I love a French barn 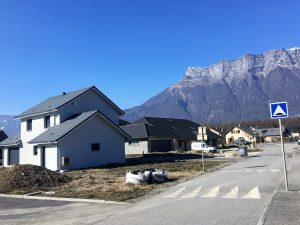 2 thoughts on “A Slow Journey Back to the Slopes”