We spent some time in Camping Torre Sabea thinking about our plans for the next few weeks. We need to be back in the UK for the end of June and have a wish list of things to do between then and now. We mulled over our options – do we continue tootling around and taking things as they come, or do we start to make more firm plans to visit the areas we know we want to see. We decided on the latter…for now.

So first on our list was a visit to the Gargano peninsula. We had seen mixed reviews of the area, but most of the negative reviews were about the busy summer period when it gets incredibly busy. The positive reviews extolled the beauty of the coastline and the forested interior. It’s a popular destination for Italian holiday makers and campsites can get full. We felt we were safe enough in the low season, although we did wonder what the May public holiday might bring.

The Gargano Peninsula is still in Puglia, but when you look on the map Puglia is a very long region and by the time you reach this ‘spur’ that sits above the heel of Italy you are actually further north than Naples. It was a pretty long Sunday drive and for the first time in ages we had to pay a toll for the main roads (the motorways in the south are free).

We drove to a couple of spots in busy Manfredonia, but didn’t really enjoy the vibe of the place, it was just too busy for us and the parking was all in quite noisy locations. So we trundled around the coast to Porto di Mattinata where we parked in a large parking area right by the harbour. Our drive was a little more exciting than we expected as the tunnel was shut and so we had to climb switchbacks over the ridge before taking further hairpin turns back down to the coast. The road was fine though and the views were amazing.

We had expected to pay for the parking by the harbour, but no one was manning the entry so we were lucky. Although the little seaside resort was very busy the car park was almost empty, everyone seemed to be parking along the side of the roads. That evening the couple of restaurants and bars were busy and the atmosphere was cheerful, we wandered down for a late evening drink to get a taste of the atmosphere. 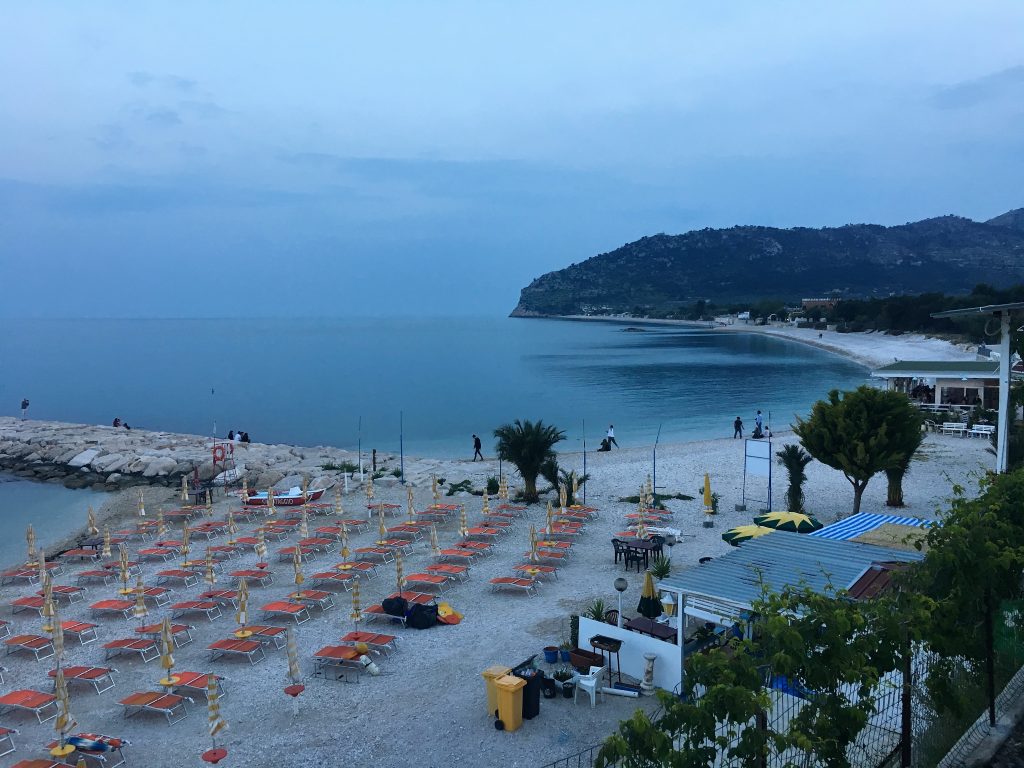 The following day we walked south along the bay and up the marked path to the headland of Monte Saraceno. From this vantage point we could see the orderly ranks of olive trees on the flat land behind the bay. Mattinata town itself sits as a shining white highlight in a sea of green on the steeper land a couple of kilometres back from the bay. The olive trees may have been an important part of the economy once, but many of them now have dual purpose, doubling up as campsites, private parking areas or providing access to the beach lidos. Who can blame the local population for making the most of this beautiful location. 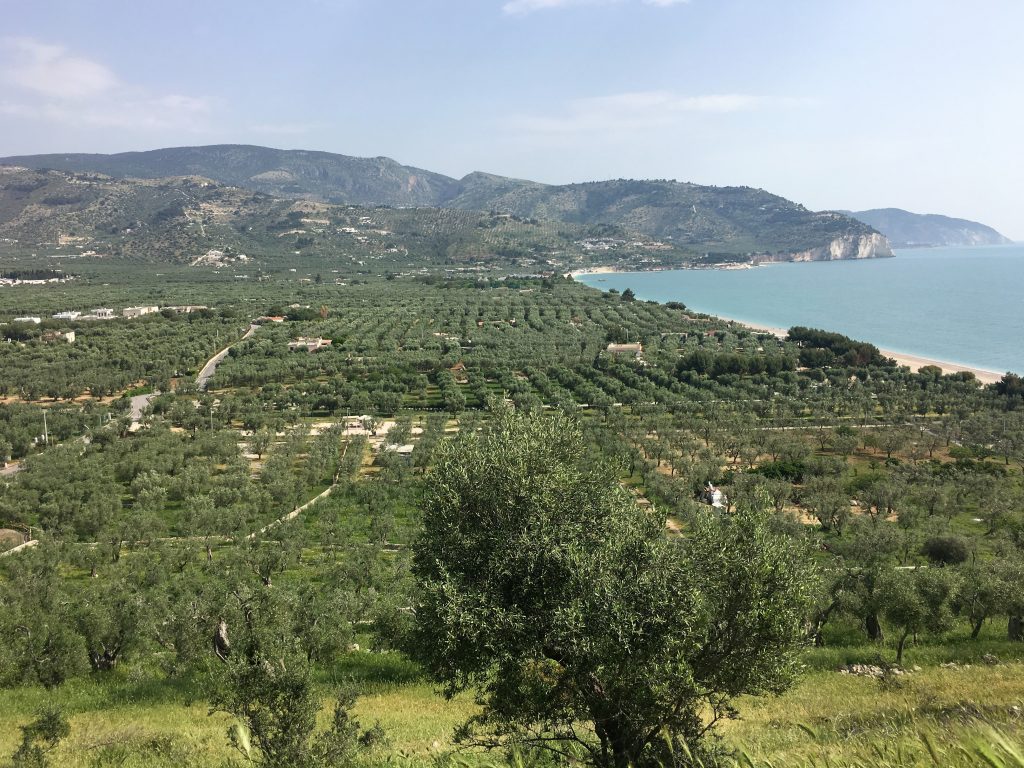 Olive trees taking up all the available flat land

Our walk followed one of the ‘running trails’ that are marked up for the Gargano running week. In the temperatures we were experiencing I wouldn’t want to be running, it was sweltering enough to be walking in the heat of the sun on this exposed bit of coast. The path took us around the north side of the headland and then up onto the ridge heading from east to west. The limestone rocks of the ridge were carved into strange shapes and overhangs and the mostly good path was eroded in one section – a rope had been provided to help people up or down. 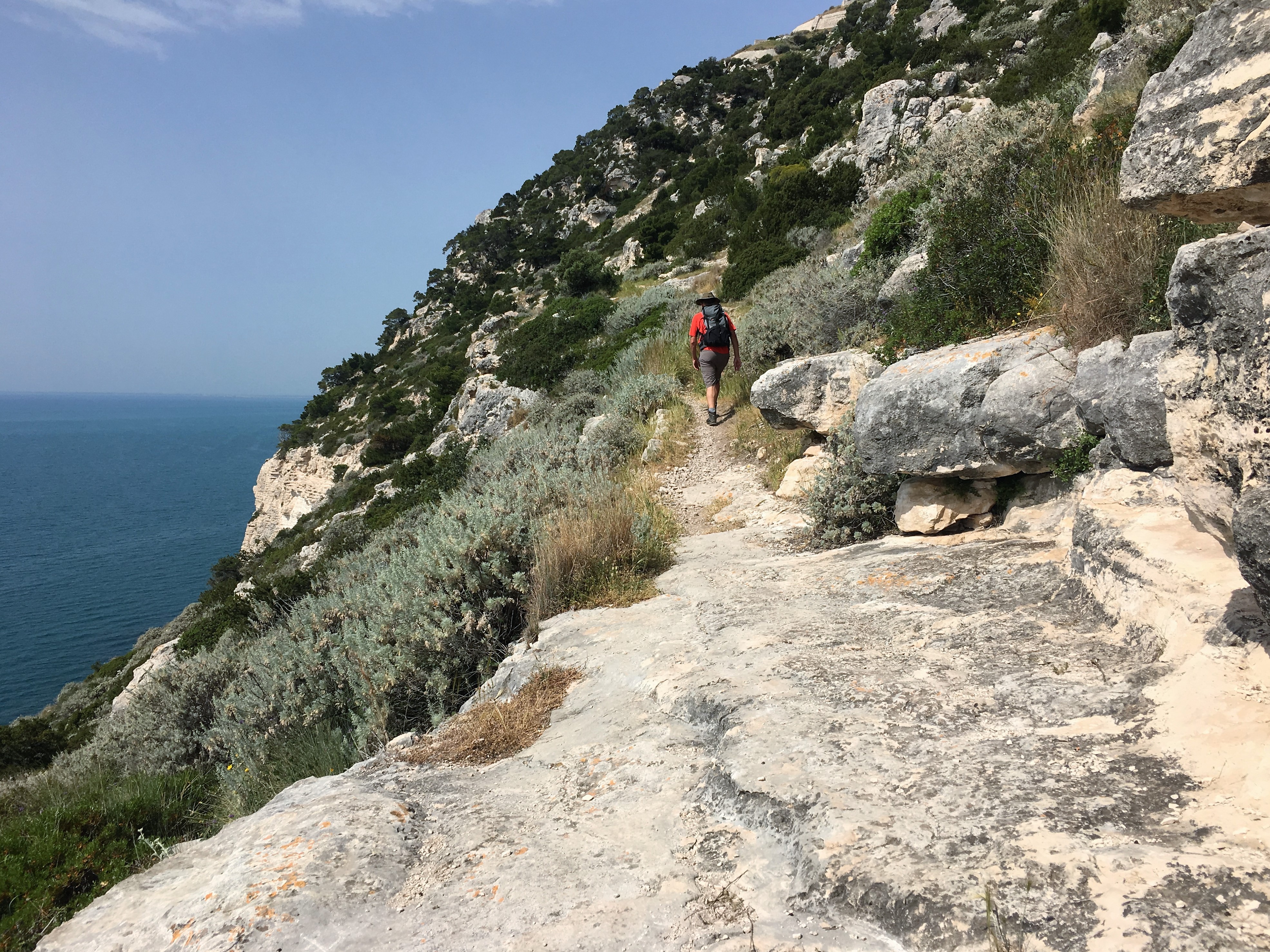 Walking the coast path around the peninsula

On the top of the ridge we startled a couple of groups of pigs who were keeping cool under the scrubby trees. Did you ever sing the song ‘Whose pigs are these?’ ? I remember school coach trips and family drives where we had fun trying to think of rhyming solutions to the pig conundrum. ‘They are John Potts’ and I know them by the spots’ is the usual first verse but of course you can make up any version, as rude as you like (if the teachers aren’t paying attention). 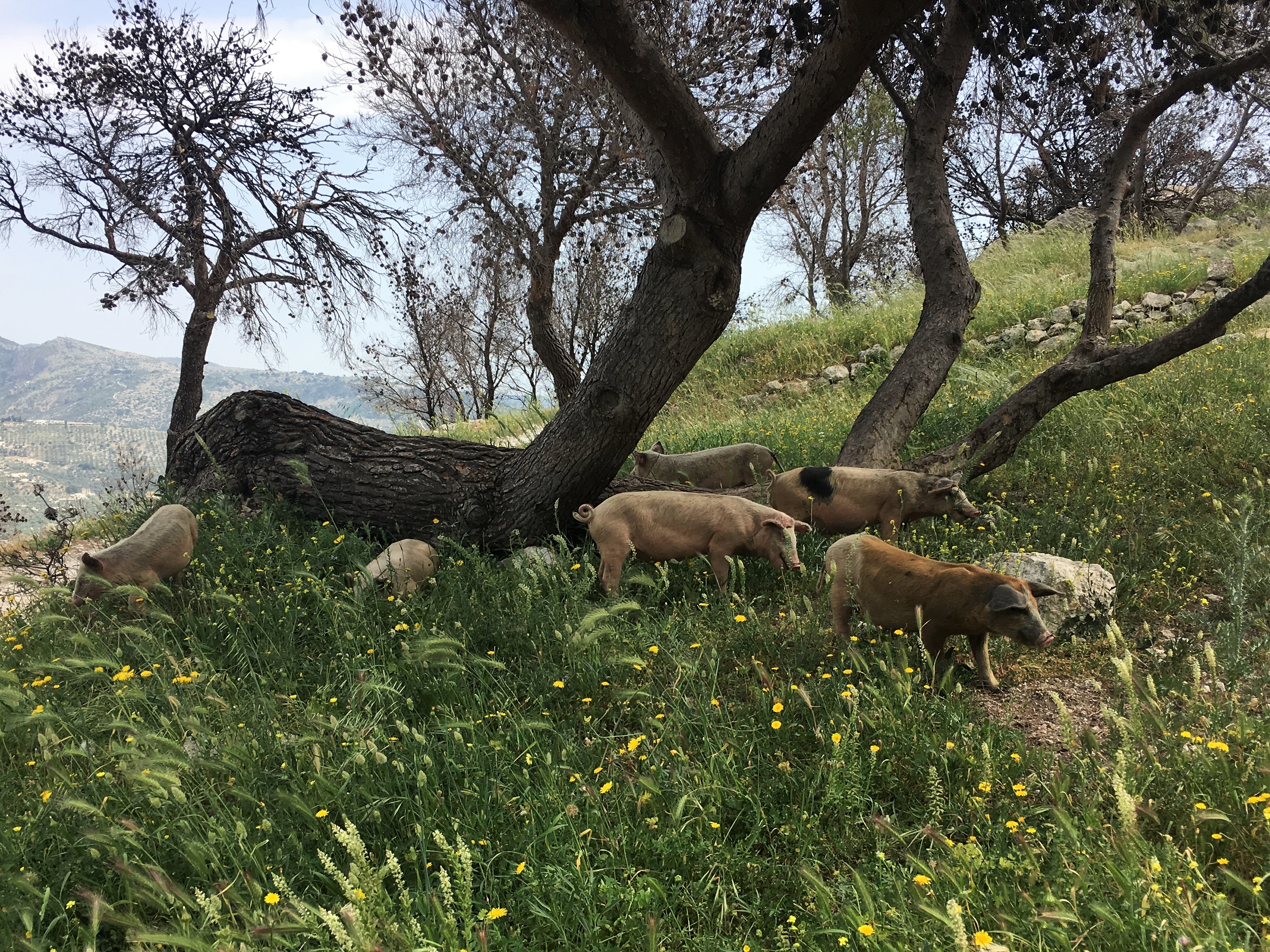 Whose pigs are these?

As well as being home to a herd of pigs the ridge is the location of the necropolis of the Dauni tribe who lived here over 2500 years ago. Grassy paths wind in and out of the tombs carved into the rock, some obviously man made, some that might be natural. It’s a mysterious place to wander around and try to identify the graves, it’s a shame there isn’t much information  locally about their discovery or their contents. 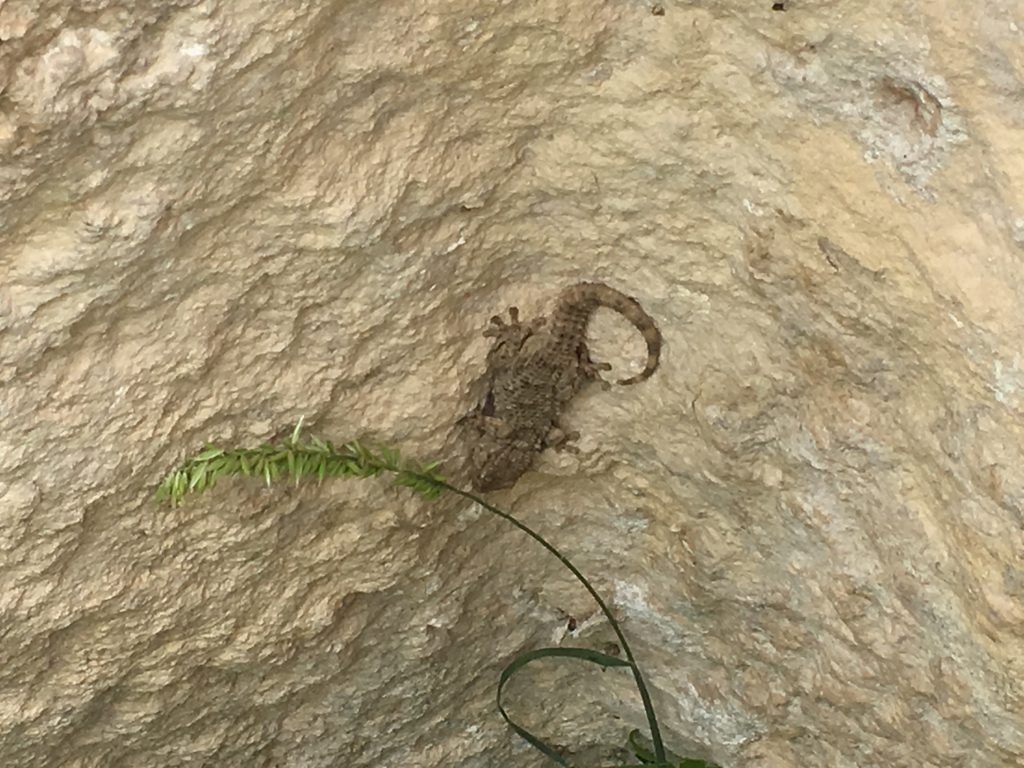 Our first sighting of a gecko in Italy, hiding in the corner of a rocky grave 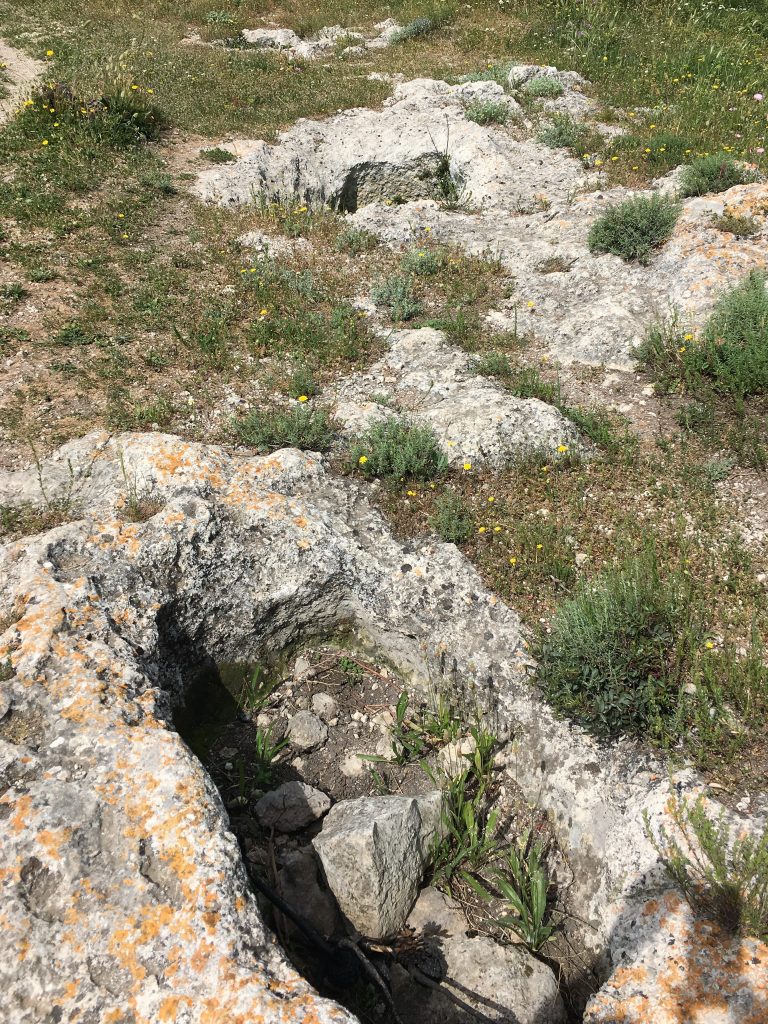 Tombs cut into the limestone at the necropolis on Monte Saraceno

After wandering along the ridge we found a footpath downhill that crossed the switchbacks of the road we had driven down the day before. We were too hot to venture into Mattinata itself so we headed back through the olive groves to the beach where we could cool off in the sea.