We chose Camping Torre Sabea as our campsite to give us time and space to solve our mosquito problem. We ended up staying for three nights at this pleasant ACSI site, the weather was still warm and once we had settled in – set out the chairs and table, rolled out the awning and sorted out the bloodsuckers – it seemed too much of an upheaval to put it all back again. The site got steadily busier while we were there because it soon to be the next public holiday. While we were paying at the end of our visit the campsite owner described the procession of horses and other festivities happening in the nearby town of Galatone. We always seem to miss events and festivals, and were sorely tempted to go back to our pitch, but our minds were already on our next destination.

The campsite was near the tourist town of Gallipoli, not the location of the famous WW1 campaign, but a historic town that has made it as a tourist hotspot. We decided to walk into Gallipoli, mistakenly thinking that we could walk along the coast. Sadly we were forced back onto the main road when we got to a boatyard, with no pavement we walked along the hard shoulder, both feeling a bit exposed. We would recommend using the campsite’s navette (minibus) service instead. Gallipoli is a good town for wandering around; the medieval castle and walls surround a centro storico that sits on a promontory, separated from the modern town by a causeway. Within the walls you can wander around narrow streets where tourism sits cheek by jowl with more traditional pursuits – particularly fishing. We saw groups of fishermen mending nets, or sorting their long lines and one man weaving traps as well as more decorative items for the tourist market. The streets around the walls have views over the sea and so this is where you find plenty of restaurants, bars and cafes. In the warm weather they were doing well and we heard many northern European accents amongst the Italians, including a few British voices. 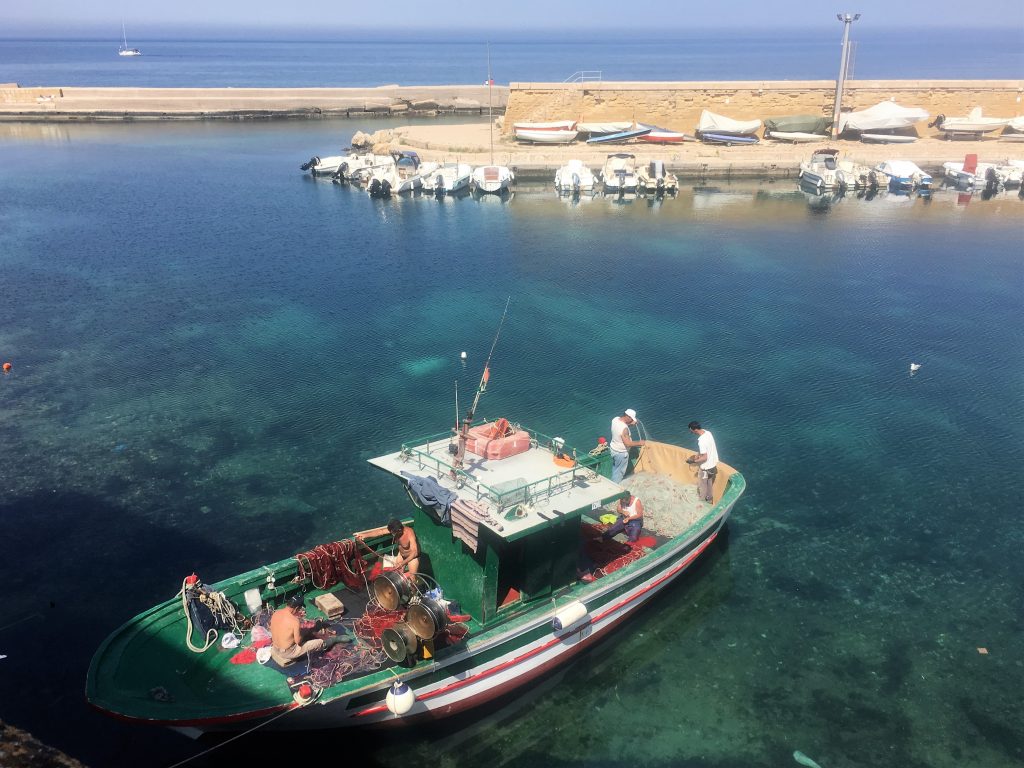 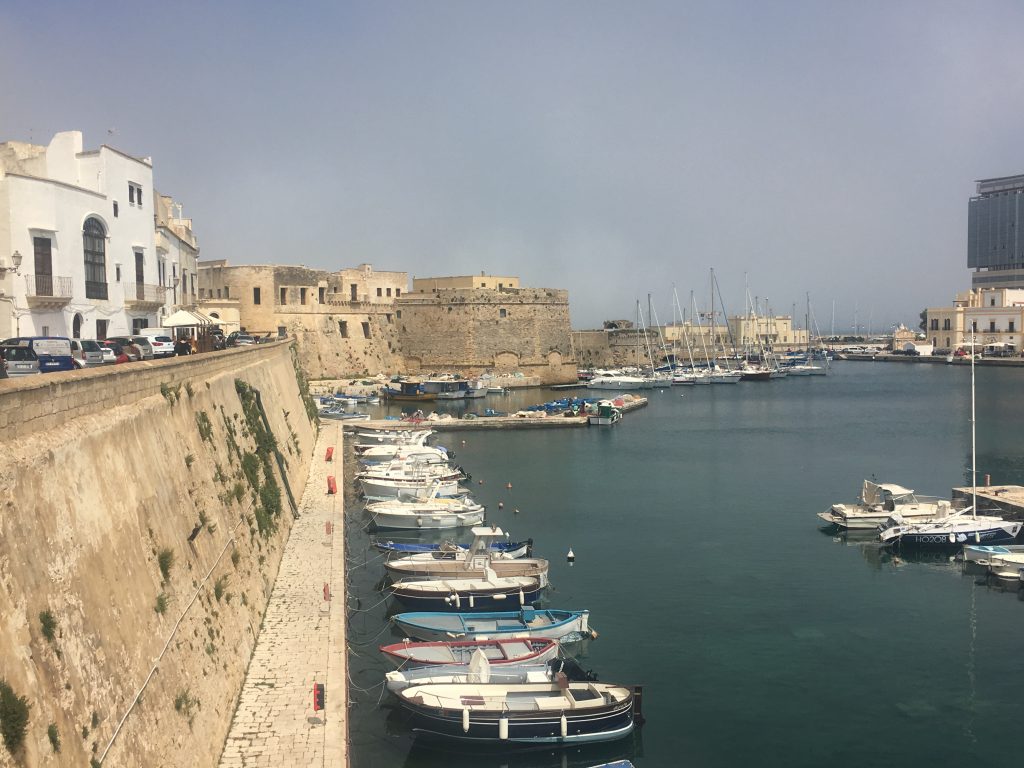 Under the walls are a number of harbours and one sandy beach where we took a swim to refresh ourselves from our dry and dusty roadside walk. After wandering around we stopped for a couple of panini for our lunch before heading back to the campsite. On the way back we stopped in the nearby supermarket (almost next door to the campsite) where they had lamb on offer. We hadn’t had any lamb for ages so we bought some to barbeque that evening, marinated in mint and balsamic vinegar and served with charred sweet potato, onions and courgette. Yum. The cadac was doing it’s job. 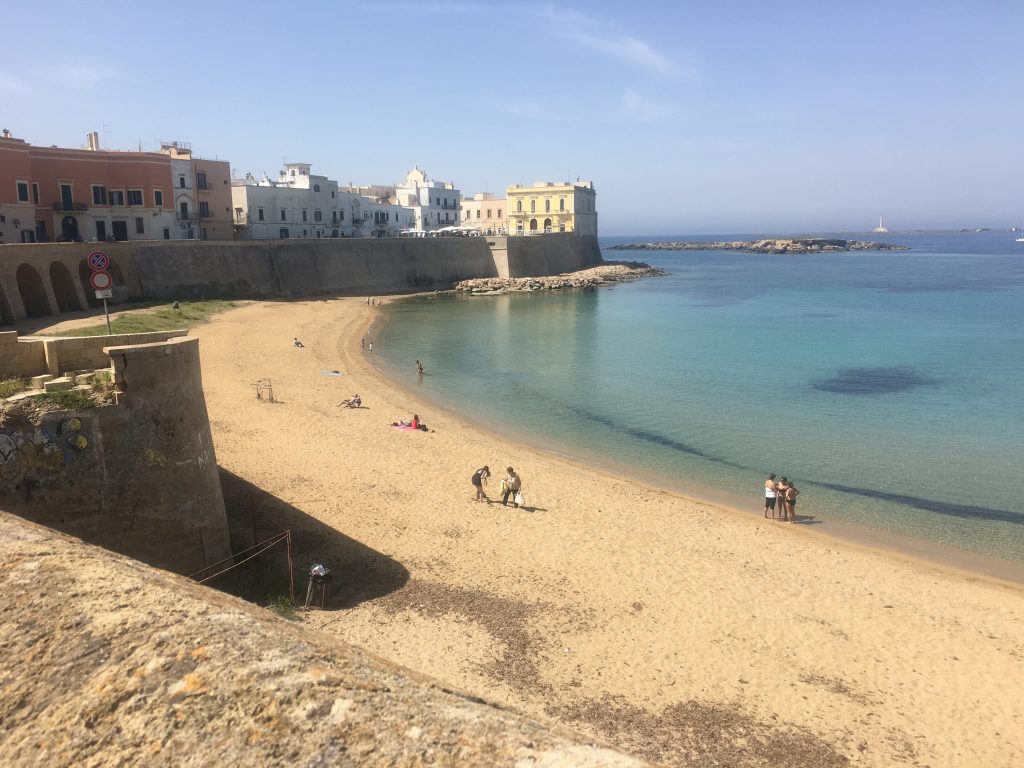 The beach under Gallipoli’s walls 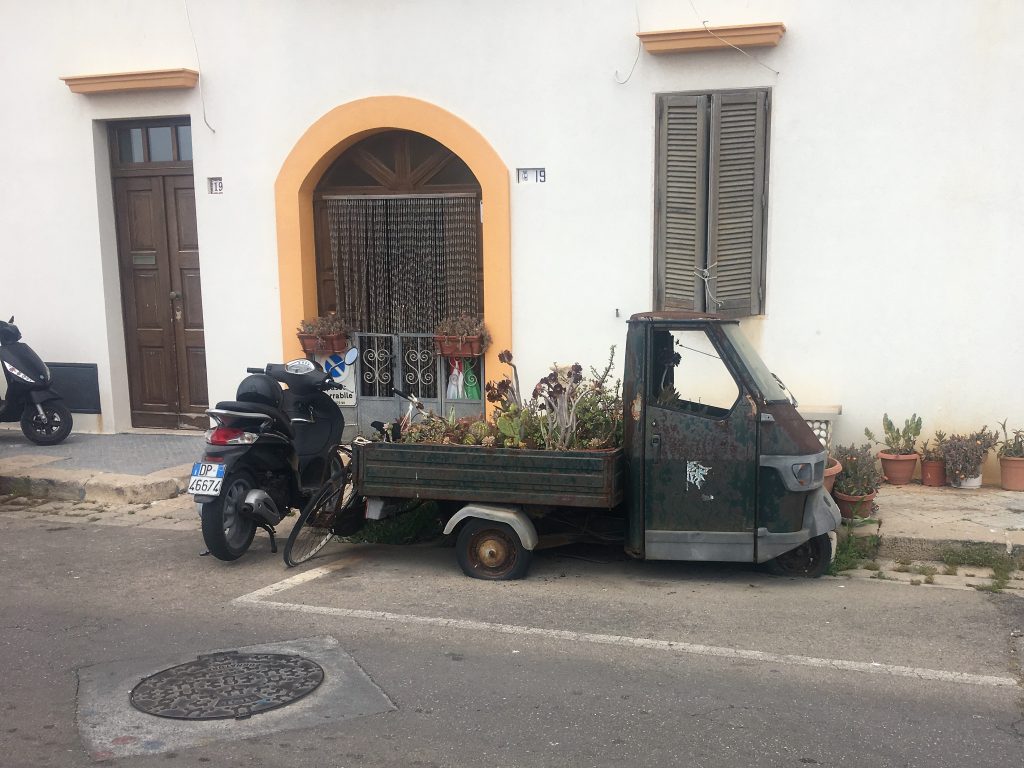 Decrepit APE being used as a front garden

The following day we decided to cycle north along the coast and to the Natural Park of Porto Selvaggio. This was a lovely cycle, initially along the coast road through villages and past rocky shores with occasional small sandy beaches. As the road headed inland we found a track to take us through the pine forest to the beautiful inlet of Porto Selvaggio. It was a Saturday and all of the beaches we had passed were busy with families enjoying themselves, people looking for a little more solitude had set up camp on the rocks rather than fighting for a sandy spot. 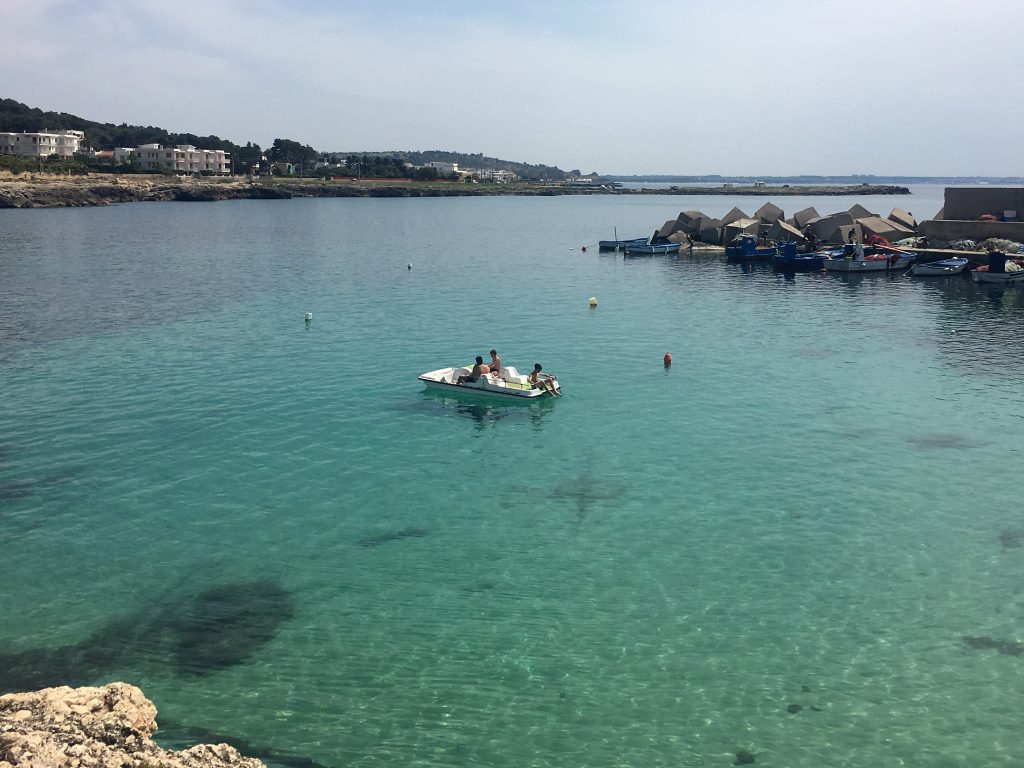 The pedalo was out! 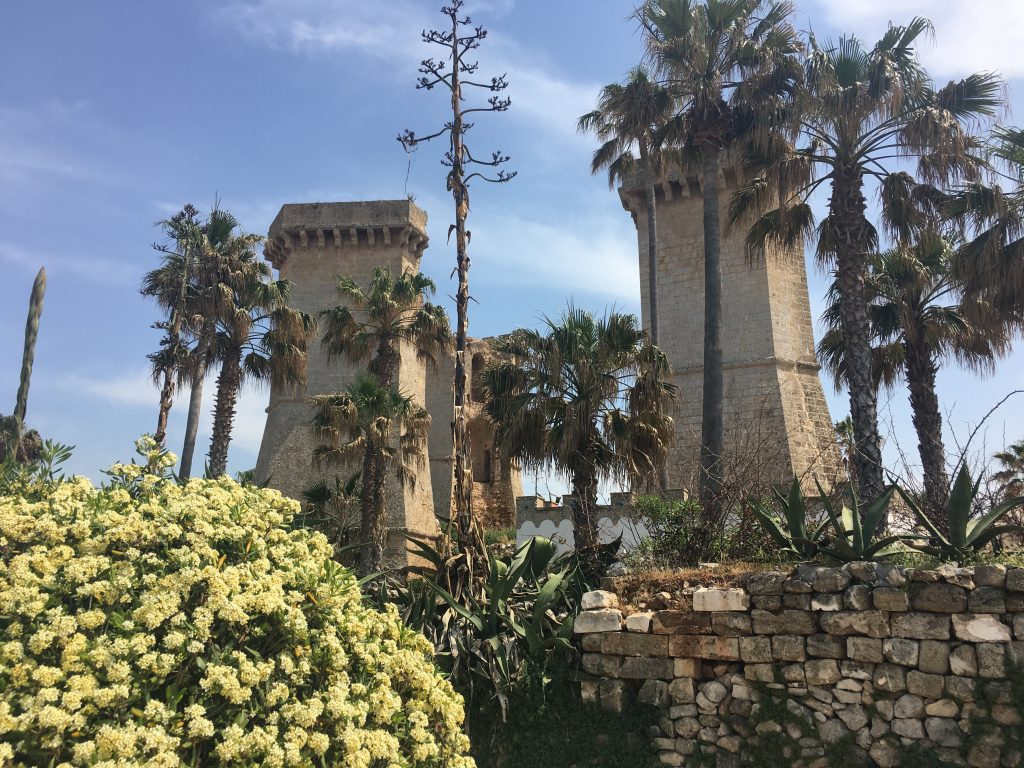 Porto Selvaggio cannot be reached by car, but even so there were a good number of people there who had hiked down from the parking areas. We found ourselves a spot on the rocks to one side of the inlet and settled down for a little bit of sunbathing followed by another swim. The water here was deep and cool, a few people were daring each other to jump straight in, but I was happy to make my way in by degrees and then float on the top of the water where it was warmer. When we were dried back out we cycled back the way we had come. 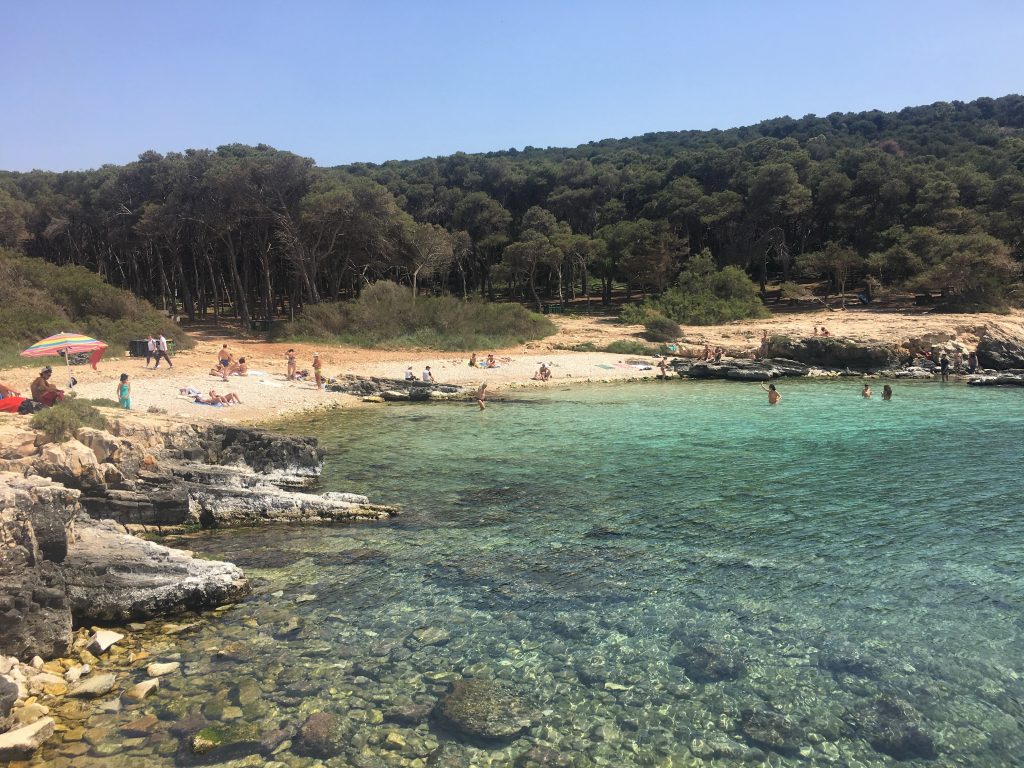