I’m not sure why I haven’t mentioned the blood sucking monsters yet, but that’s all going to change in this blog post. With rising heat and falling wind speeds it was only a matter of time before they reared their ugly heads. We’re talking mosquitos of course and they had begun appear a few days ago, just one or two to start with, and then suddenly there were hundreds of them.

On the night of Liberation Day the evil little blighters had been having a party of their own, using my body as their restaurant. All through the night I could hear the whining as they flew around and I took refuge by hiding completely under the cover (which by this time was a duvet cover with any duvet). The following morning it was evident that I hadn’t managed to escape, there were browny red splodges on the bed sheets where I had rolled and crushed them in my sleep….but only after they had feasted. 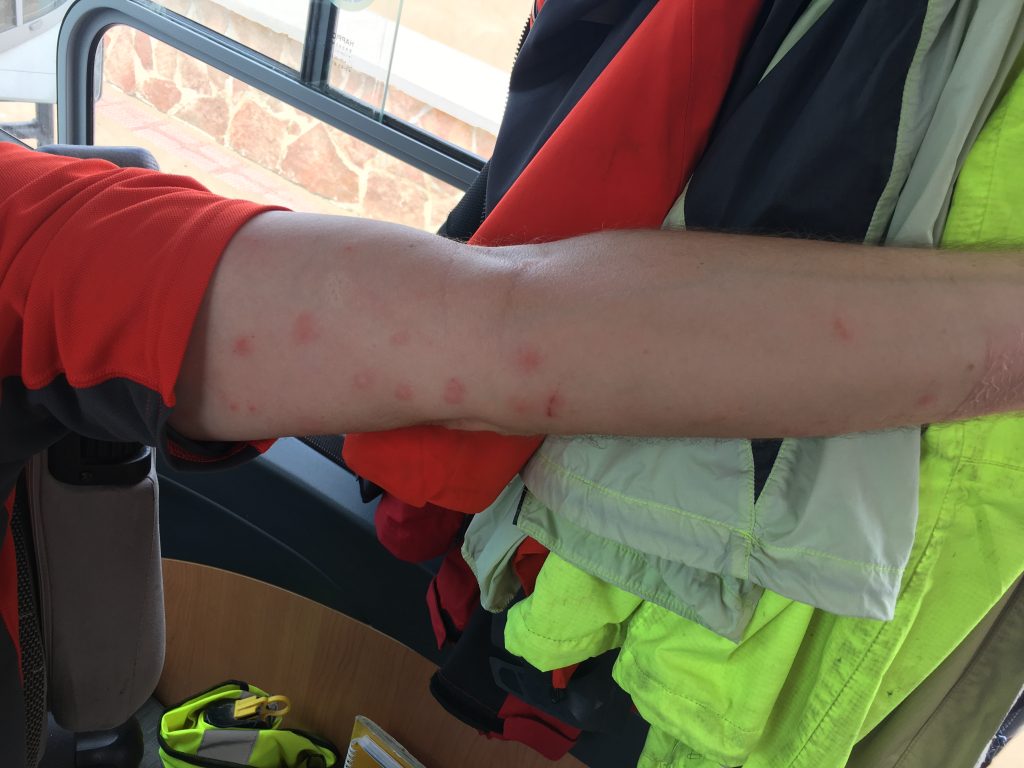 Our problem was a lack of preparation, we had been taken by surprise and foolishly had all the windows open without any fly screens up. It was time to take action.

Step one was to find a campsite so that we could give the bedding a wash and air. Then we made a concerted effort to hunt down every mossie that was hiding in the nooks and crannies of the van, waiting to come out at night. This involved a lot of opening of cupboards and shaking stuff out, followed by an after dark torch-lit hunt. The fly screens were put into operation (including clearing all the sand and crud from the channel of the door flyscreen so that it would actually close). It made a huge difference. But sadly the fly screens stop a lot of the cooling breezes that make us comfortable at night. The solution? We remembered that in the ceiling of our bedroom we have a 12v fan that will either suck or blow. Running this while the sun was shining kept the internal temperature of the van down and any electricity used was replaced by our solar panels. This was the first time we have used the fan since checking that it worked when we bought Bertie. Finally we see why it might be useful.

In the end we managed to get the number of the blood sucking creatures down to nearly zero – small enough numbers that we could swat them before going to sleep. Gradually our blotches and bumps subsided, we stopped scratching (and then telling each other off for scratching) and managed to get a decent night’s sleep. Garlic may have been used, but the holy water and wooden stakes stayed in the kit bag for next time.