The 25th April is Liberation Day in Italy. A day to remember the end of the fascist dictatorship and the end of Nazi occupation. It’s also very close to the national spring holiday on May 1st, so lots of Italians take time off work during this week. Put that together with some unseasonably warm weather and you have the recipe for some serious Italian socialising.

We moved to a carpark by the ‘Maldives of Puglia’, a long stretch of white sand beach with beautifully clear water – although it didn’t deliver the tropical fish and turtles I would have expected of the Maldives – we got there at about 10am and it was half full, including a handful of motorhomes. About an hour later it was the typical chaos of a busy Italian carpark. Every available space taken, small cars squeezed into unfeasibly small spaces (we did witness one driver climb out of his boot), cars parked on the end of rows, cars double parked (I assume they knew each other), newcomers driving round several times looking for a space. It was entertainment in itself.

The lidos had not yet opened for the season – and I bet they were kicking themselves – so there were no regimented ranks of umbrellas and sunloungers, and no payment to get onto the beach or to park. Behind the beach a fair had set up, with fairground rides, food stalls, bars, live music and some incongruous bric-a-brac sellers. It wasn’t really our thing, but sometimes it’s good to just go with the flow. We alternated lying on the beach with wandering around the fair, soaking up the atmosphere and enjoying watching so many people having a good time. On the beach we witnessed people standing knee deep in the sea having vivacious conversations either with other people or on their phones. We decided that knee deep was the optimum depth, you would be cooled by the sea, no one would accuse you of sneaking in for a quick wee and you wouldn’t get your swimming costume wet, avoiding having to do the towel dance to change out of clammy swimwear and into dry undies. A group of a dozen or more teenage boys set up camp behind us, attracting the attention of passing teenage girls, who then walked past again, and again. We groaned inwardly but the lads were more interested in looking good than creating any sort of disturbance. When they played football they always had a couple of them fielding any stray balls that might hit other families – how very civil. But then, when you see how packed Italian beaches get, there is probably a strict etiquette for beach behaviour.

The partying went on until about 10pm, so not particularly late, the car park was left with just a few motorhomes parked up and we had a quiet night. Watching so many families and friends having a good time reminded us of home and how nice it is to celebrate together. 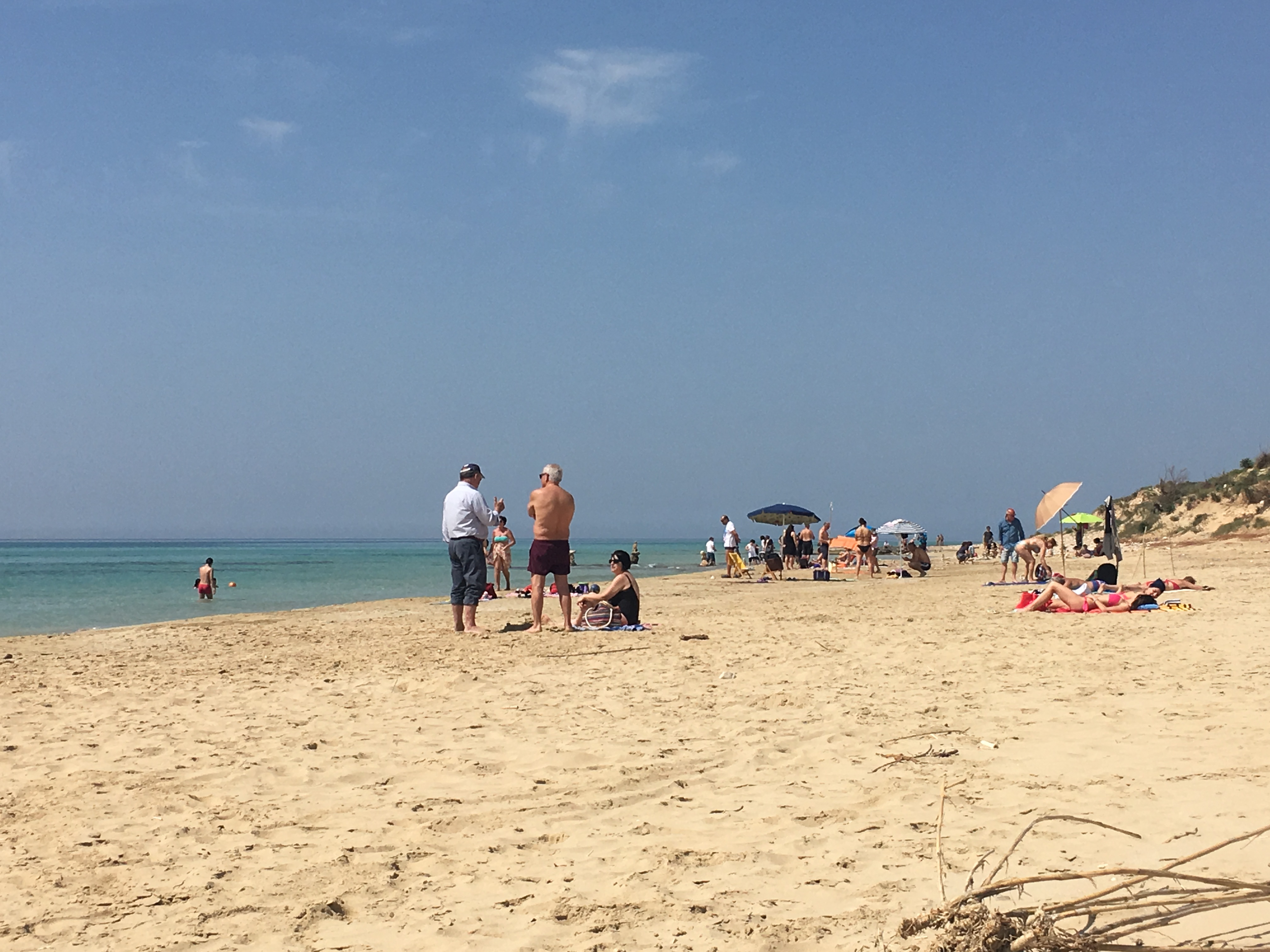 Early morning at the beach on Liberation Day