It took a bit of google action to discover that the song ‘Nel blu dipinto di blu’  was that song. We had been prompted into a google search after seeing a statue of Domenico Modugno, Polignano a Mare’s most famous son, standing with arms outstretched on the promenade. After hearing it once it became a bit of an ear worm and we caught ourselves singing ‘Volare ooh oh, Cantare oh-oh-oh-oh’ while wandering round town. We weren’t the only ones. 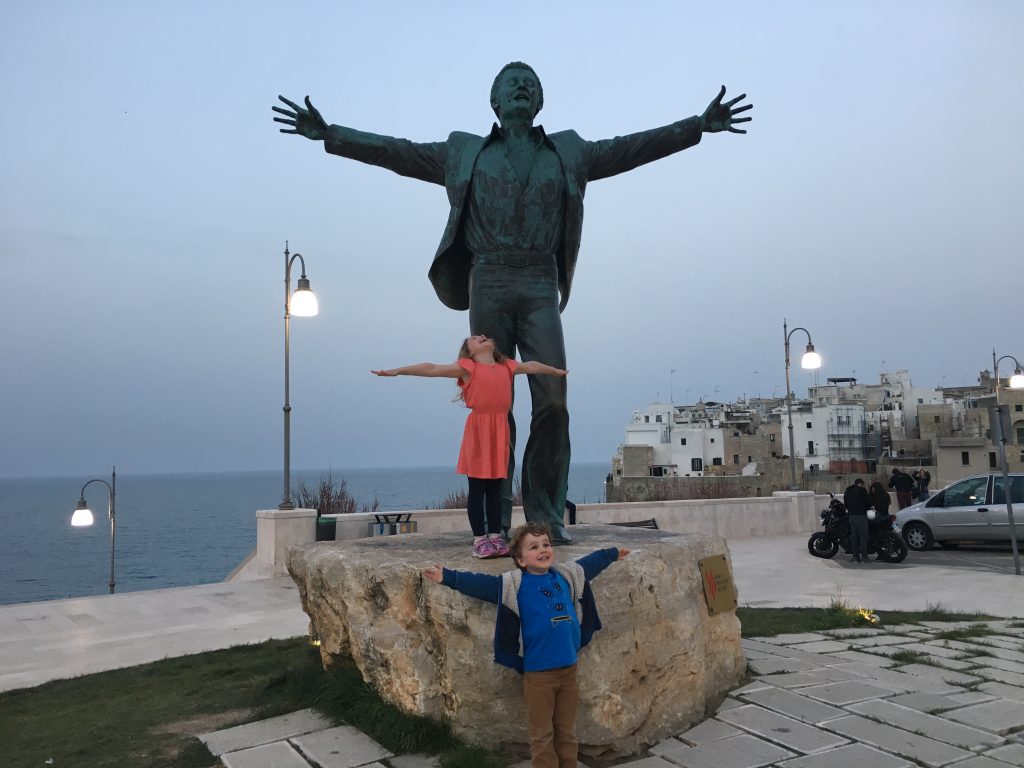 Polignano had been a good choice of venue for a short break, we had a lovely little apartment just outside the old town, with a sunny and safe terrace and bedrooms with vaulted stone ceilings like little caves. The town doesn’t have any distinctive tourist attractions, but it does have a pretty little old town that is almost entirely given over to tourism and a very attractive cove of a beach that must be hell in high season. The majority of the seafront is a low cliff ten or so meters above sea level where they hold Red Bull cliff diving competitions. We only saw a couple of lads taking the plunge while we were there, the water was cold and deep and the air temperature not yet warm enough to entice sane people in for more than a paddle.

It’s the type of place that is busy throughout the year, so restaurants and gelataria were open for business. There were people of all nationalities, including quite a few British families, enjoying their Easter holidays here. We spent time on the beach, paddling in the cool sea, climbing onto the cliffs to get sight of the fish swimming below us and clambering over the clifftop limestone spotting lizards. We ate pizza and pasta, creamy soft burrata and lots of ice cream (Bella Blu was our favourite place for gelato). We drank the non-regional but very easy drinking Lambrusco. We wandered out in the early evening to spot bats flitting around the lampposts and fisherman setting out with bright lights for catching squid. Between times we relaxed in the apartment, talking, reading, and listening to the kids playing ‘the shopping game’. 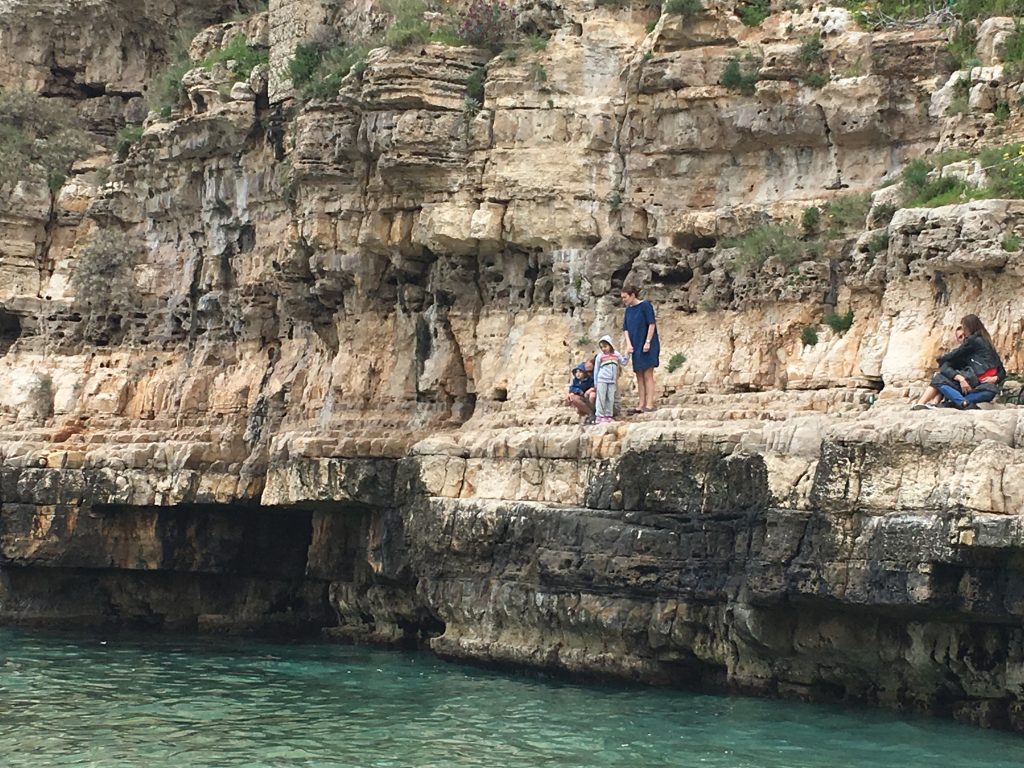 Watching the fishes from the cliff ledge

Not far from Polignano we found a great beach near the Abbazio di San Vito where there were shallow rockpools hewn from the rocks just right for little ones to explore, turning over every available rock to look for fish, crabs and shrimp. Locals were buying plates of freshly opened sea urchins from a table set up outside the abbey but we didn’t find any underfoot. 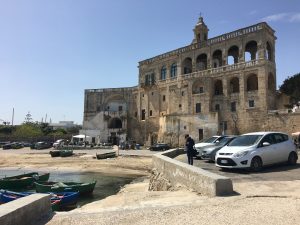 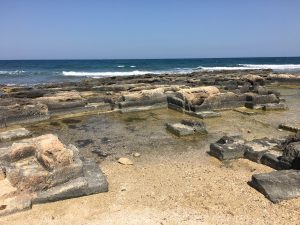 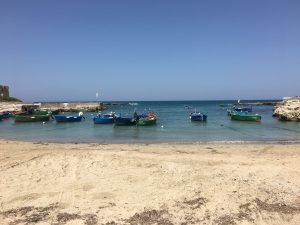 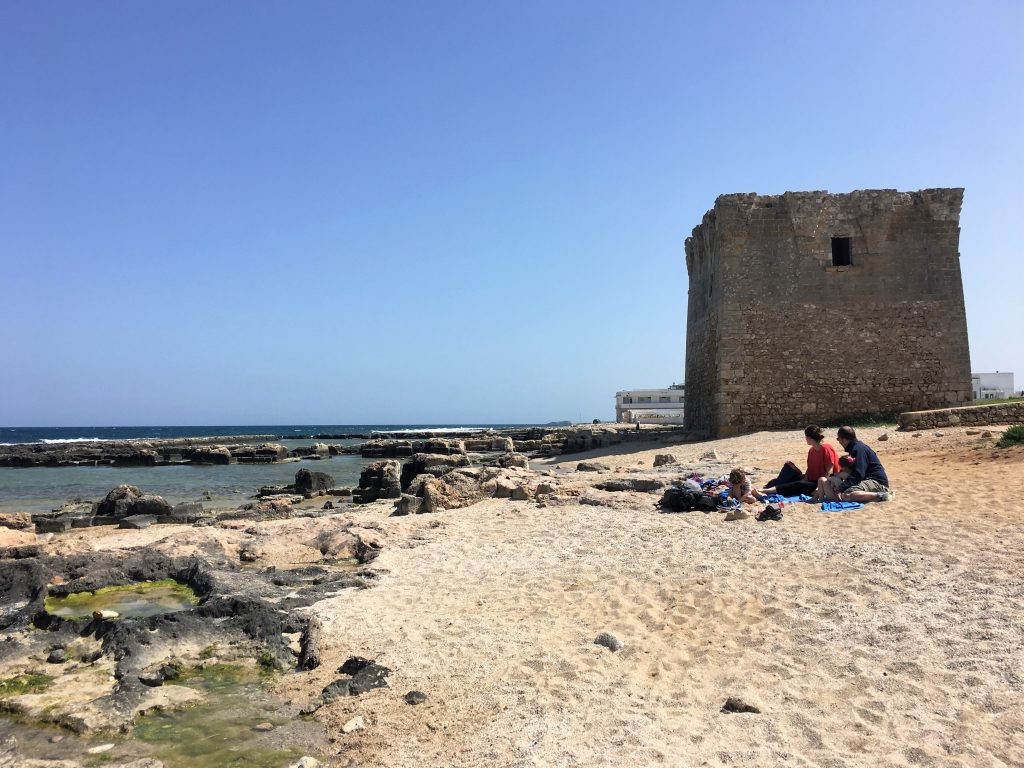 On the beach at San Vito

A bit further away we visited Alberobello to see the Trulli houses; constructed from limestone these dry stone walled, single roomed and conical roofed buildings looked like something from a fairytale. We ran the gauntlet of cheap tat and slightly more upmarket ‘gourmet’ gifts for sale along the streets of this intensely tourist town, but with children in tow we couldn’t avoid it completely and two not-irritating-at-all whistles were purchased. Uncle Paul used his grumpy face to successfully forbid any playing of whistles in the car. 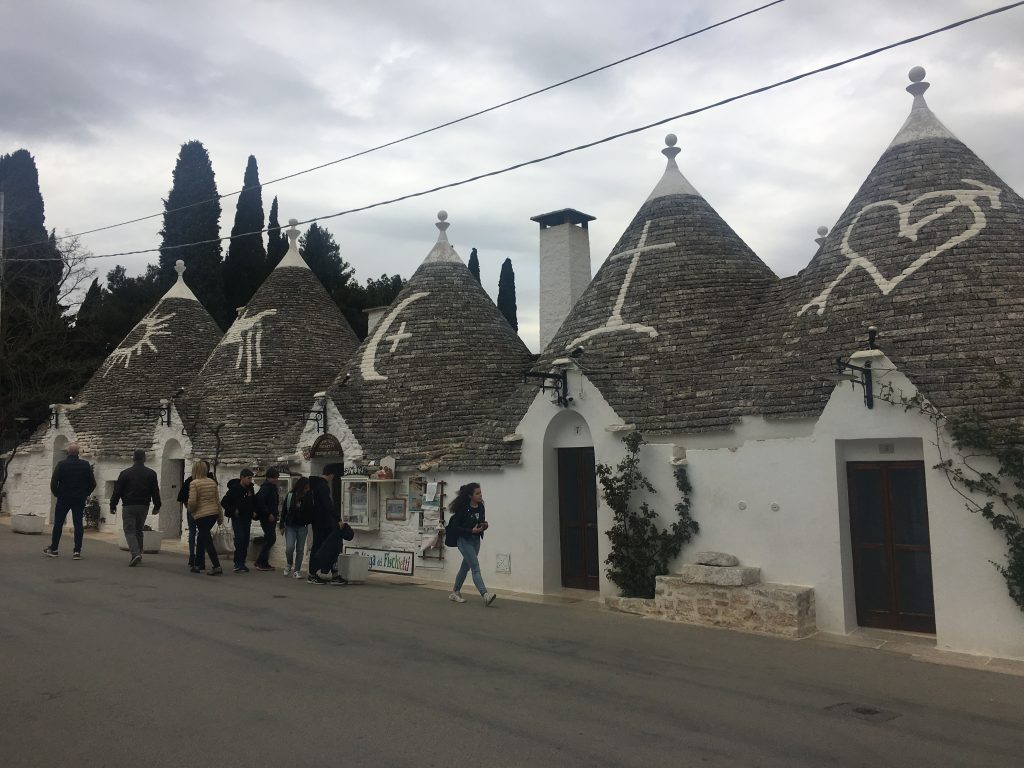 All too soon we had to take everyone back to the airport. The car was dropped off and help was obtained from tourist information to phone Parcheggio Il Pinguino and get picked up and returned to Bertie. 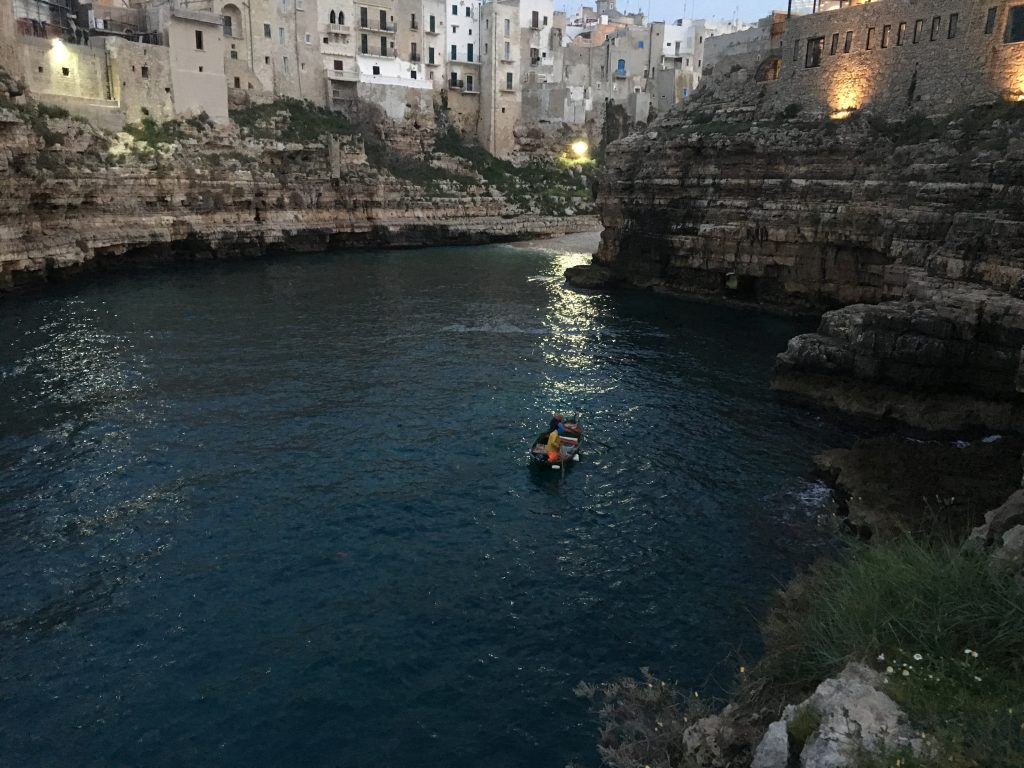 That night we were back in Bertie again and normal service resumed. You might have heard us humming ‘Volare ooh oh, Cantare oh-oh-oh-oh’ one more time.