The Valle d’Itria is a wide shallow depression that runs from north-west to south-east through the limestone heart of Puglia, roughly between the latitudes of Bari and Brindisi. Alberobello is the most well known town in this area, and after visiting it’s quirky but slightly contrived trulli area we were keen to explore a bit more and maybe find somewhere that felt a little less gimmicky.

The area is welcoming to Motorhomes, the towns we visited all had motorhome parking signposted on entry to the town. We started in Locorotondo, a small town with a compact circular Centro Storico. Here we turned up after following signs to a parking area only to find newly painted blue lines (meaning that the parking space not always free) with signs and ticket machines being installed as we watched. We didn’t think that anyone would be checking tickets on the first day of installation, but just to be sure we checked with the people who were setting everything up – ‘domani’ (tomorrow) was their guidance as we mimed putting money in the machine. Locorotondo was pretty, especially from a distance with it’s distinctive tower, it was also very white, unlike northern and central Italy where there seems to be an agreement that buildings should be painted earth sunset tones. Here painted white walls were interspersed with limestone grey and the occasional soft golden stone. 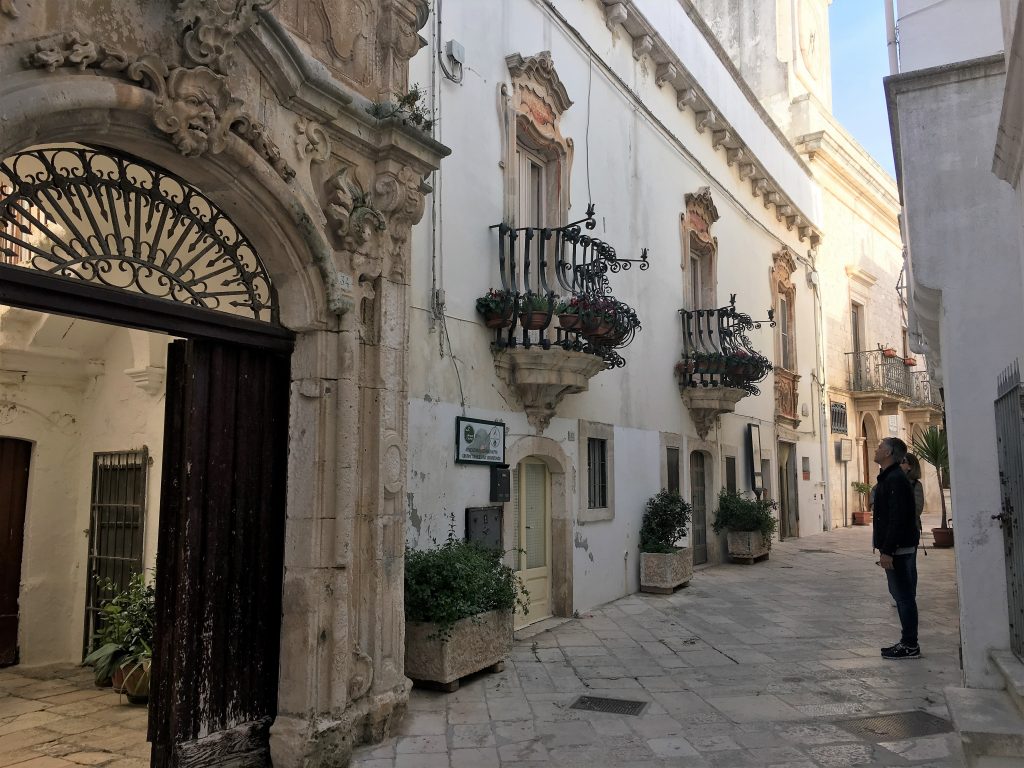 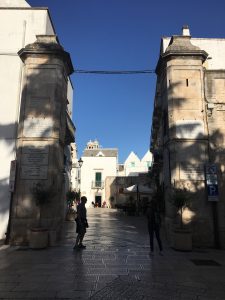 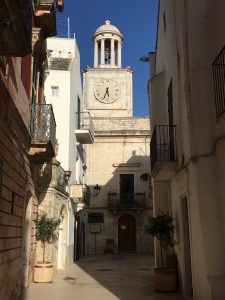 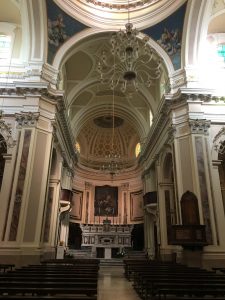 We popped into the town to track down the tourist office and find out what walking or cycling trails existed. We were pointed in the direction of a set of cycle trails centred around the Acquedotto Pugliese (AQP).  Much of Puglia is limestone and so fresh water is scarce, mostly running underground. The acquedotto was an early 20th century engineering project to bring water from the mountains of central southern Italy all the way down through the Puglia peninsular. 500km of aqueduct was created, much of it underground, and the cycle path runs along the service road. In the Valle d’Itria they have created a network of cycle routes that join up with the AQP from the major towns. Well mapped and signposted cycle paths have been rare in Italy so far so we were chuffed to have found this little treasure.

From Locorotondo we followed one route out almost directly from our car park. On road at first until it hit the AQP. We cycled happily through karstic scenery, past villas, farmhouses and many trulli; freed from the captivity of Alberobello these ‘wild’ trullis had a greater visual impact. Some were titivated to the extreme, with extensions, terraces and swimming pools, some were animal shelters or sheds and some were just piles of limestone. Swallows swooped around us, lizards scattered in front of us as we disturbed their basking, flowers bloomed, olive groves were being cultivated and rich red earth had been turned over between trees. The AQP section we included between the SP134 and SP14 was really well maintained and obviously popular; there were more cyclists, runners and walkers than we’ve ever seen on one path before. 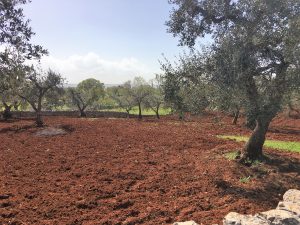 Turned earth in the olive groves 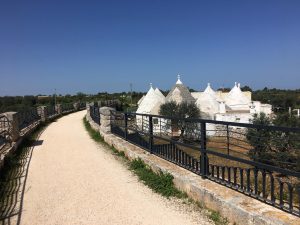 The next day we drove to Martina Franca, bigger than Locorotondo we didn’t venture into the centre of the town but set out immediately on another bike ride, making a circuit taking in a more southerly section of the AQP and heading south to north this time. This ride took in a lot more off road action on rough tracks and the AQP was rougher too with some gates that needed to be navigated around. Still it was a great day out, there aren’t too many big hills here but enough ups and downs to make it feel like you’re getting some exercise. 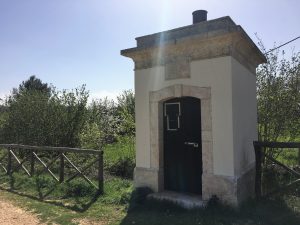 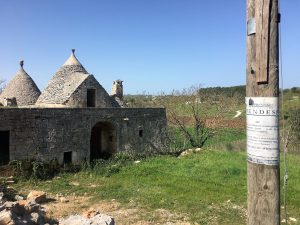 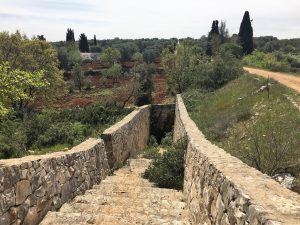 Inspection steps for the Acquedotto

That afternoon we decided our parking spot in Martina Franca was too noisy for overnight and so we moved on to Cisternino where the motorhome parking was down a steep entry ramp that caused us to scrape  the bottom of our chassis on the ground. There was a service point here but the water was turned off so we decided not to use it.

The following morning we had a wander around Cisternino old town. It was Sunday and everyone was dressed in their finest. Old men gathered spectators as they played a game that involved tossing coins onto the ground, similar to pitch and toss but without the wall as the target. Cisternino is known for it’s butcher restaurants where you can choose your cut of meat and get it cooked for you. We were tempted but it was too early in the day. 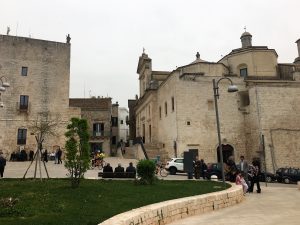 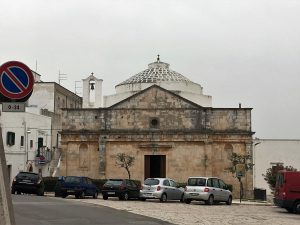 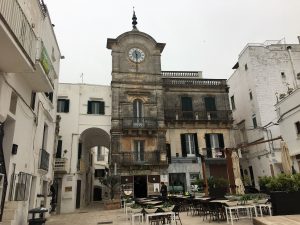 From Cisternino we moved onto Ostuni where we found a carpark with services, again there was no water but in the opposite corner of the carpark was a water fountain with a threaded faucet that allowed us to easily connect our hose. We wandered around Ostuni listening to many British voices, and trying not to feel frustrated with the slow moving crowds. It is known for having one of the highest densities of British expats living in Italy, we wondered if the British had influenced the large number of hanging baskets and window boxes in the town. After a quick trip to a bakery we escaped the turmoil in the narrow cobbled streets and walked around the outside of the city walls. 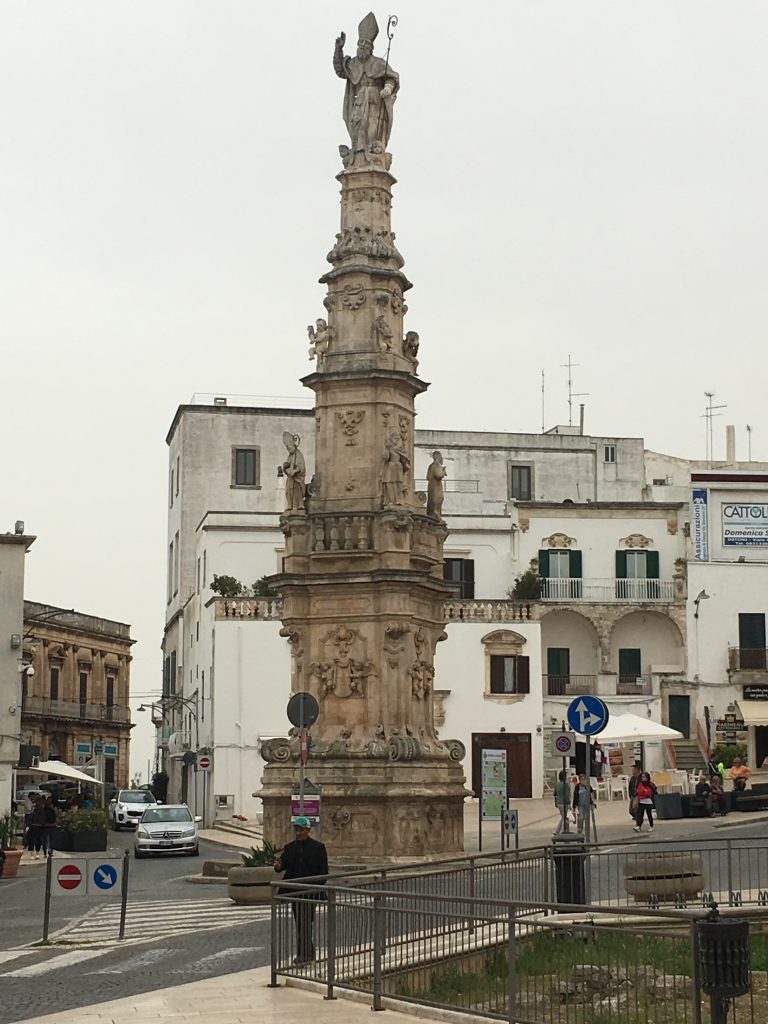 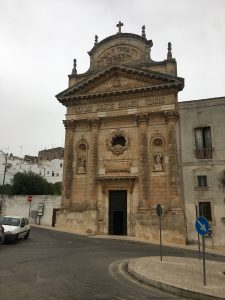 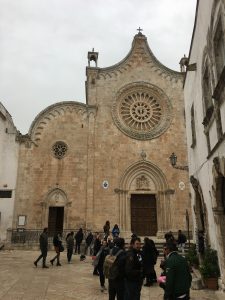 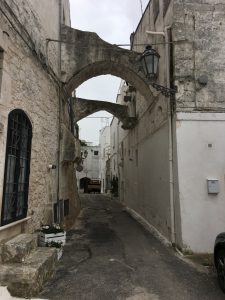 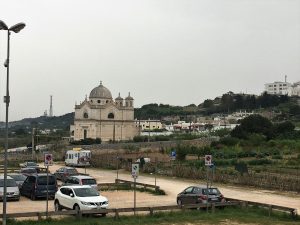 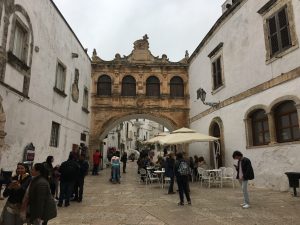 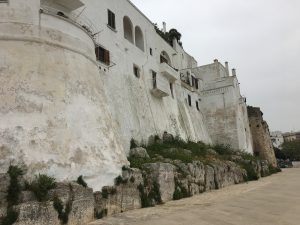 We loved this area, the beautiful historic town centres, the countryside dotted with trullis, the welcoming tourist infrastructure. It’s easy to see why so many people chose to buy property or settle here.