We were very, very excited because today was the day my sister and her two bambini were due to arrive to join us for a short break.

But we were also a little apprehensive because we had a few things to sort out before picking them up from the airport at 9pm that evening. Would all the logistics fall into place?

The plan was that we would stay over in Polignano a Mare the night before arrival. Then we could pick up the keys for the apartment we would be sharing in the morning.

Parking proved a little tricky. The car park we had identified as being suitable for an overnight stop was indeed large and empty and still free. However there were signs everywhere saying that parking was forbidden from 7am – 2pm on the 8th. We didn’t want to get up that early! We learnt later that the local driving school was holding some sort of scooter lessons/tests in the car park. Another Italian motorhome had parked up anyway and the scooters worked around it. Oh to feel confident enough to ignore the signs.

So, after visiting two other unsuitable carparks in Polignano a Mare (one too expensive and the other with signs forbidding motorhomes), we spent the night of the 7th inland in a free sosta in Castellana Grotte instead. We parked with four shiny brand new lorries on the edge of an industrial area. It was one of those utilitarian sostas, nothing pretty (in fact the facilities were less than pretty), but useful for visiting the caves that make the town famous – not that we were going there.

We didn’t have to pick the keys up until 11am so we easily made it back to Polignano a Mare, parked as close as we could get to the apartment and popped to pick up the keys. It was Sunday and the town was busy with people enjoying the beautiful spring weather that had arrived.

From this point onwards the plan went pretty smoothly. We managed to do a couple of loads of washing, taking advantage of the washing machine in the apartment and the sunny terrace for drying. We did a supermarket shop to stock up with the basics and packed a couple of rucksacks and a holdall of clothes and things to leave in the apartment. Two rucksacks and a hold all may seem overkill for a four night break away from Bertie, but Paul does like to be prepared for every eventuality! Compare it to my sister who arrived with one carry-on case and one rucksack for the three of them.

It was the sort of day you spend on tenterhooks waiting for something to happen. We couldn’t settle or relax and kept running over our plans for the rest of the day, which just gave me more things to worry about. It was a relief when the time came to head off to the outskirts of Bari where we would be leaving Bertie in secure parking. Parking Il Pinguino was the only secure airport parking we had found that specifically mentioned motorhomes, so we were parking Bertie here and hiring a car for my sister’s visit. The staff at Parcheggio Il Pinguino didn’t speak much English, we only speak a few words of Italian (we had booked up via email using google translate to aid us), but we managed to get Bertie parked and the shuttle to the airport without too much difficulty, after all – why else would we be there? At the airport we picked up the keys for our hire car for the next few days (yes, a compact car was big enough, no need to have worried) and finally settled in to wait for their arrival.

It had been a long day of waiting, but everything had worked out and finally we saw them coming through the arrivals door. We were all set for a few days of family fun. 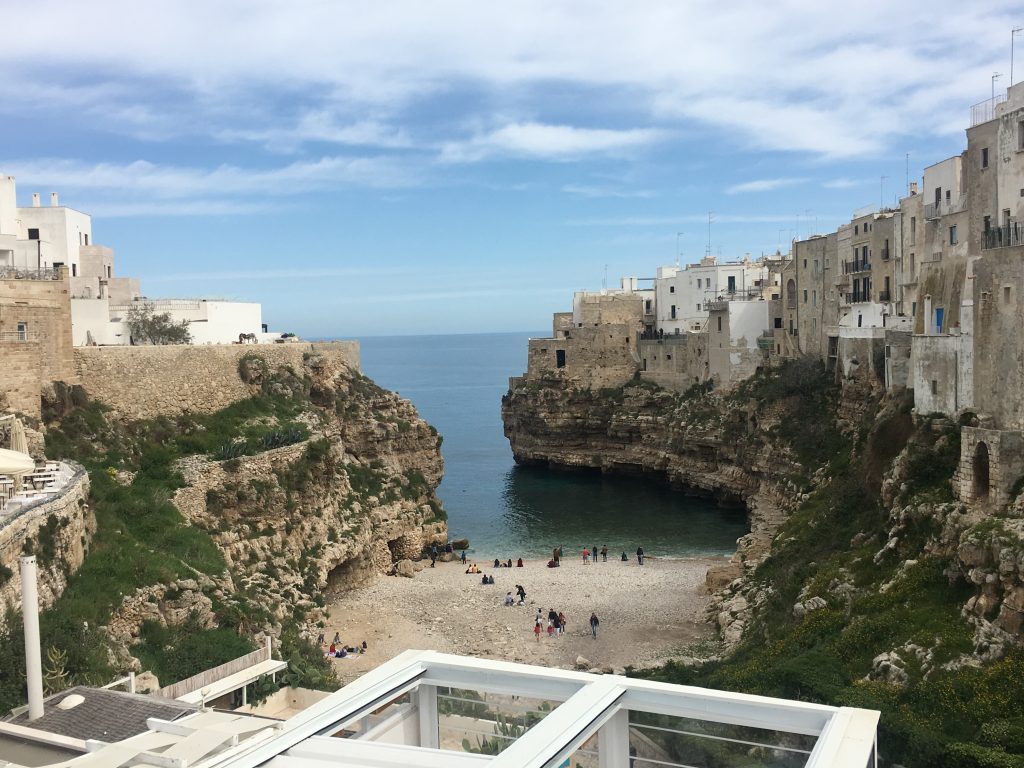 The beautiful cove at Polignano a Mare, our location for the next few days