Matera; a city soon to be European Capital of Culture (poor Plovdiv is sharing the accolade in 2019 but seems likely to be overshadowed), famed for it’s cave like Sassi dwellings, setting for many a biblical movie and one of the oldest continually inhabited cities in the world. It has been on our must see list for some time and we were finally on the way.

The Sassi dwellings of Matera are the key reason for it’s status as a world heritage site. They are cave dwellings excavated into the side of a limestone gorge, in two districts that fan outwards and upwards. Matera was built to be hidden, but the modern city now inhabits the flat lands atop the gorge. This is where most people live, having been moved out of their Sassi homes in the 50’s due to their lack of basic amenities and the ensuing disease and poverty. It sounds as though most people are happy to be living in their modern apartments, many of the Sassi are rented out as holiday apartments, restaurants and artisan’s shops. They form a solid backbone of tourist income for what was an incredibly deprived area.

Across the gorge from the city the land is less touched by human development, here there are occasional rock cut buildings, including many Rupestrian Churches which are the other reason that the area is a UNESCO world heritage site. It was here we decided to stay, in a camper stop associated with the visitor centre. This was the perfect compromise for us, a spot in barren limestone heathland that feels in the middle of nowhere but is in walking distance of the city – or so we thought.

The morning after our arrival we took a look at the map of the official paths in the area and made our plans to walk to Matera, the path should take us down one side of the gorge, across a bridge and up the other side straight into the sassi area. It was a nice day, the sun had come out after the previous day’s thunder and the brisk breeze kept the temperatures cool. We struck out along the path that took us to the gorge. The views from here across to Matera allowed us to see the full extent of the Sassi areas, and at the very least I would advise driving to the belvedere to see the views from afar to get that sense of perspective. 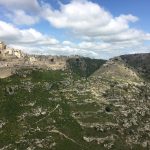 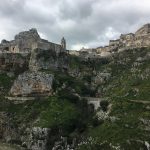 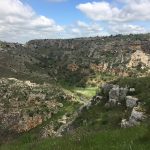 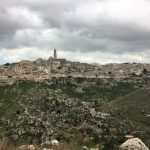 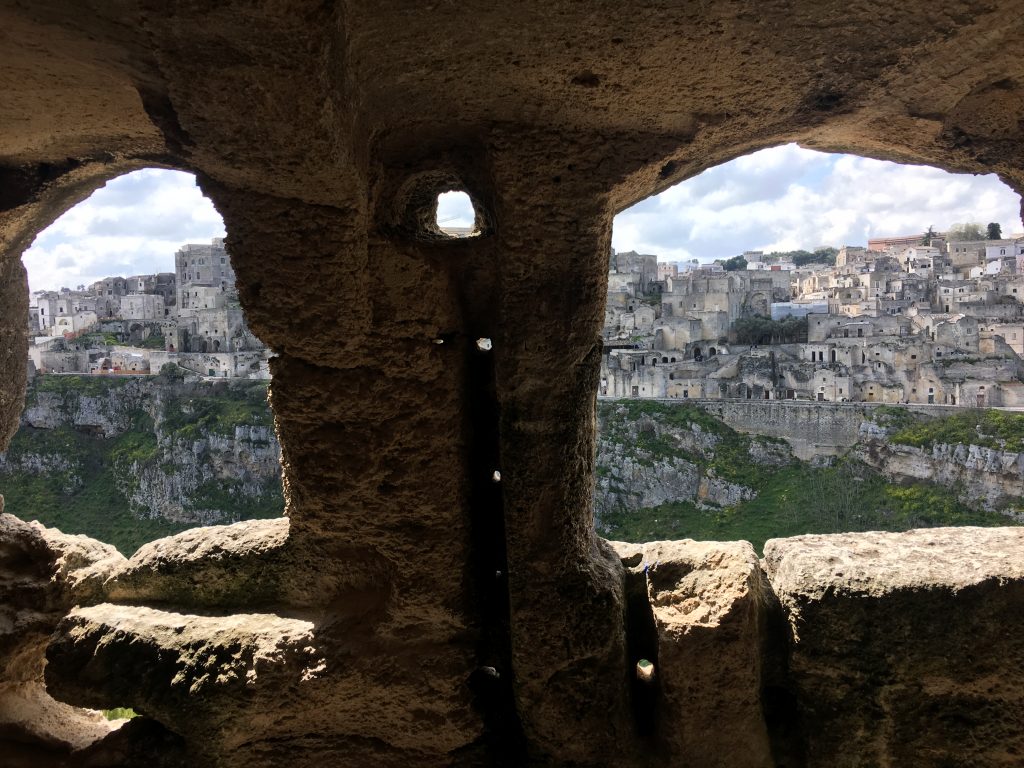 As we descended into the ravine we got our first indication that the day wasn’t going to turn out the way we expected. ‘Il ponte e chiuso’ said a couple who were climbing back out of the ravine. We decided to descend anyway, the bridge might be closed but before it had been built the route had involved fording the river, so possibly we would find some stepping stones. We walked up and down the banks but couldn’t find an easy crossing, the river was full from the previous day’s rain and the way north was eventually blocked by a rocky outcrop over the river. Our next option was to ascend the ravine and then go back down another path a bit further north where the crossing might be easier. At the bottom of the path we encountered a British couple who told us that not only was the bridge closed but the path was completely closed on the Matera side, so it wasn’t worth trying to cross the river.

At this point we changed our itinerary. Instead of visiting the city we would do a round trip walk taking in some of the lesser churches and caves. The main Rupestrian Churches are locked and you need a guide to access them, but there are plenty of smaller caves and churches still open. So we followed the gorge north and west for a while, before heading up to the top of a hill with a church ‘Madonna degli Angeli’ that still had some murals visible. When we descended this hill we found another small church in a wooded valley. Here we sat and watched the butterflies and birds, we were looking for wild boar – the British couple had seen a sow and piglets wandering through the valley earlier – we didn’t have any luck but there were loads of beautiful swallowtail butterflies and kites and kestrels danced in the wind. 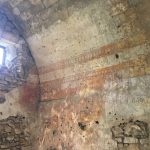 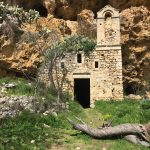 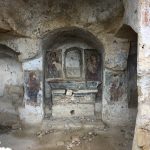 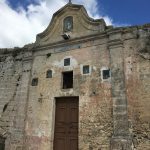 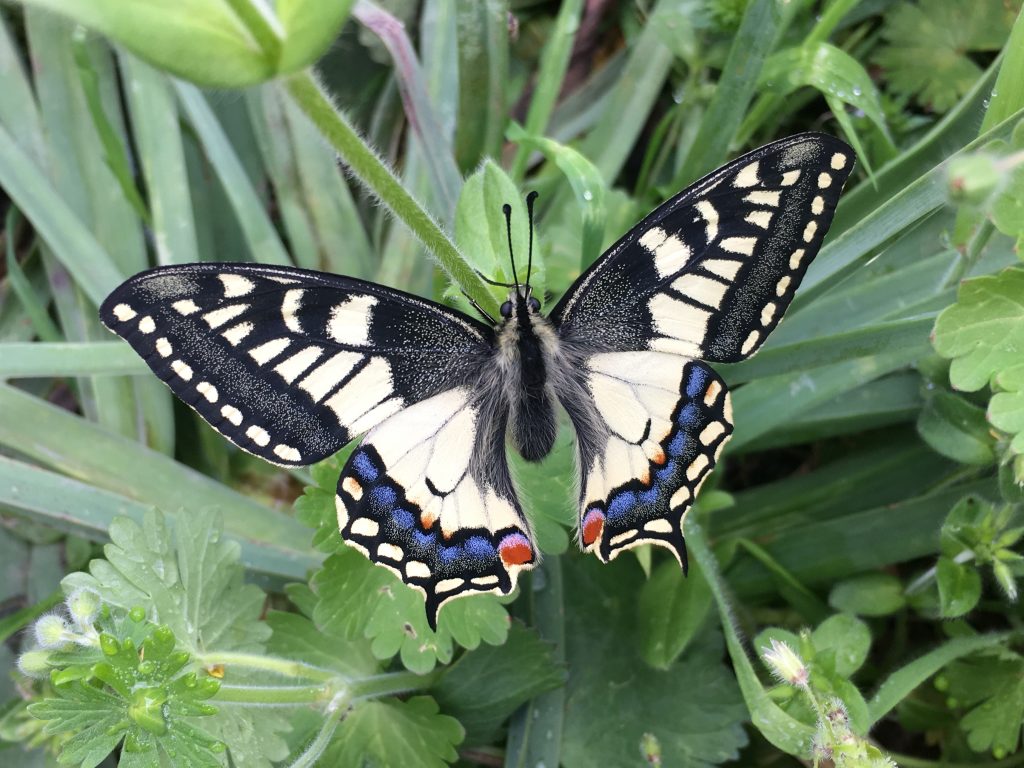 Finally we climbed out of the north side of the gorge and followed paths parallel with the main road that eventually took us back to Bertie. Our change of plan hadn’t been a massive disaster, we had always wanted to walk in the area so we had just swapped the order of events around.

That night we had a slightly odd occurrence when two Spanish women in a car turned up and knocked on our door. They were going to camp in their car and wondered if we could boil up a kettle for them to have a cup of tea before bed. They were planning to drink from a single jam jar so I loaned them the use of a couple of mugs too. They had just spent a few days in Matera and had an early flight the next day, to save some money they were sleeping in their hire car. Rather them than me! In the pre-dawn hours I heard them leave, they left the mugs under Bertie as requested.

The following morning we opted to leave the campsite and drive into Matera. On our way here we had popped to the supermarket where an elderly gentleman had accosted us to recommend parking in Viale Europa. He was quite insistent that we should park there and I didn’t have the Italian to say that we had already decided where we would stay. But his advcie came in useful when looking for parking in Matera – the parking was a small sosta on the side of a busy main road, so probably not the best for overnight, but it has facilities (closed when we were there). There is a charge for staying for the day (6 euros), but no one was manning the office or answering the phone number so we parked up, left an answerphone message and figured that the worst that would happen was that someone would be there asking for money when we returned.

We spent the day wandering around Matera. The Piazza Vittorio Veneto hides a 17th century engineering marvel – the Palombaro Lungo is a huge water cistern, built by expanding and joining several cellars and cisterns that had already been excavated in the limestone and then plastered so that water could be retained. It seems odd that this fresh water reservoir was built at the top of the town, but it’s base sits in a naturally occurring aquifer between layers of clay and so water would collect. Water was always a major issue for the Materan population in this limestone country where water percolates through the rocks deep underground and river beds are often dry. The sassi buildings collected rainwater from roofs to store in individual cisterns, but in dry summers this water became very scarce. The Palombaro Lungo made a much larger source of water available to the town. We took  a short guided tour (€3 each) into the depths of the cistern, along walkways that had been constructed to show off the scale of the caverns. 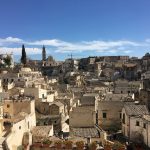 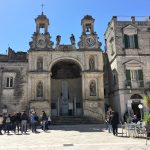 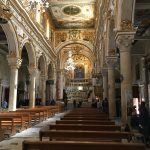 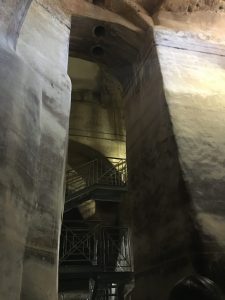 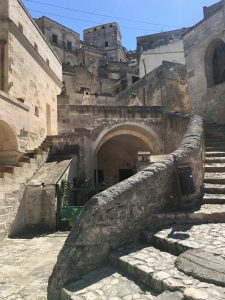 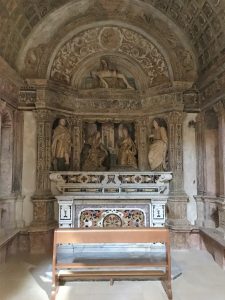 So what did we think of Matera? It is a fabulous place to visit and just wander. It is also incredibly busy, it was still low season but there were a lot of tourists, especially coach parties following their guides around. This has it’s plus points (everything is open) as well as it’s downsides, but get out of the city to the other side of the gorge and things quieten down. The rock hewn city is not unique in Italy – we have been to plenty of small towns where buildings have been carved from the rock – but it’s scale is bigger than anything we have seen before. It’s transformation from abandonment to modernity must have been an interesting one. to watch. When you visit now you see streets and buildings sand blasted into cleanliness to appeal to tourists, but that isn’t a bad thing just an evolution of the purpose of the buildings. There are museums, churches and a few empty and unrestored troglodyte dwellings remaining in the city that give an impression of the way things were and hopefully there will always be a way of remembering what it was like to live in the original sassi buildings without dehumidifiers, heating, running water, electricity and wifi.

Late that afternoon we set off to the coast to prepare for the excitement of my sister, niece and nephew visiting