We left our sosta by the sea and headed along the comfortable main road – the SS106 – on our way to Matera. Following our trip to Paestum we felt we’d seen the best of the Ancient Greek ruins that Italy had to offer, but as we were going past Metaponto we thought we might as well pop in to take a look at the archaeological sights.

We visited three main sites of historical interest here (there is a fourth, but we didn’t realise until too late), and they can be covered in a two or three hours. If you were feeling energetic you could cycle between them – the landscape is pretty flat and there are some cycle routes and plenty of bike parking. We weren’t feeling that energetic and the weather was a bit thundery and unpredictable, so we took the easy option and drove around.

We started with a trip to the archaeological park. This is an excavated and partially reconstructed site of part of the original Magna Graecia town including a theatre and temple. However, apart from the reconstructed elements, most of which are replica pieces, much of it is just foundations so lacks three dimensional impact. The information is sporadic; where signs existed some had just Italian, others also had English, German and French. We were told that we were lucky that the site was open as sometimes they don’t have enough staff to man it, but today they had a school group and a coach party visiting so we were ok. It was free to visit (I think you’re meant to get a Museum ticket and this is included in the price) and a pleasant stroll around – we also had the backing music of the frog chorus from the ditches around the site.  We couldn’t quite work out what the modern facilities were meant to be – there is a viewing area which looks like someone has mislaid a diving platform, a display area and a building for some of the finds, it all looked half completed as though someone had decided to try to make a proper go of this as a tourist attraction and then decided it just wasn’t worth the effort.  Pythagoras had a lot of followers in Magna Graecia and some say that he chose to live out his old age in Metaponto after falling out of favour in mainland Greece. 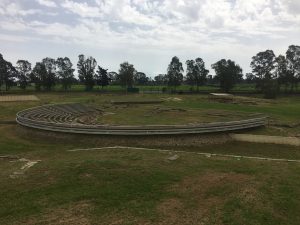 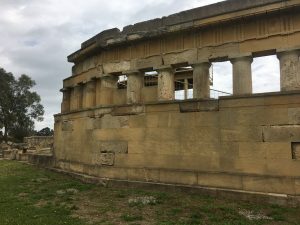 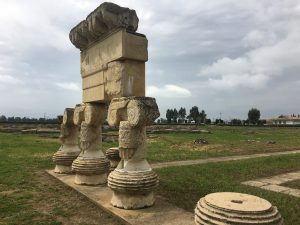 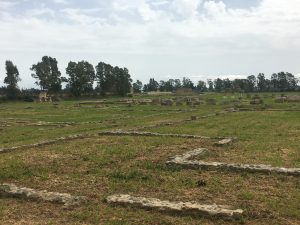 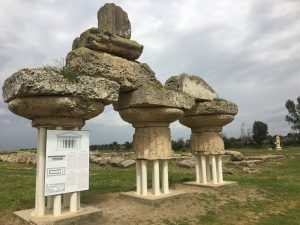 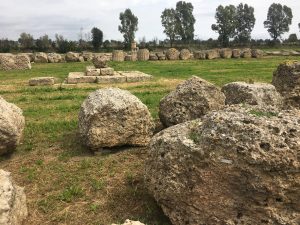 The museum was next and our favourite part of the day, we really enjoyed looking at the various artifacts on display, most of which came from tomb sites. The exhibits were interesting because they were small ‘everyday’ items. Jewellery, personal grooming effects, devotive objects, weapons, vases and decorative items. Of course because they were in tombs they probably weren’t really everyday, but people’s best things that they wanted to take to the afterlife. Small is beautiful and this was a captivating little museum that was well laid out, the objects were mostly labelled in Italian but a bit of google translate made it easy to work out what we were looking at. The staff were all very pleasant too, trying their best to educate us despite our basic Italian. The school party swarmed around us, very vocal but also very well behaved, their teachers had them herded through the museum pretty quickly. 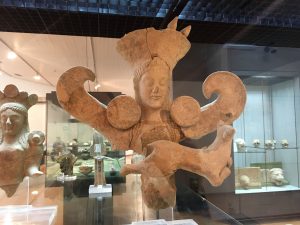 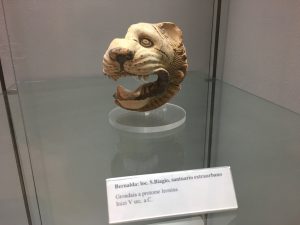 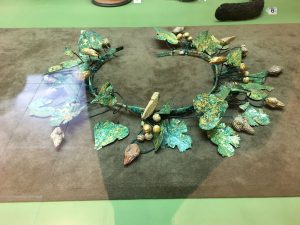 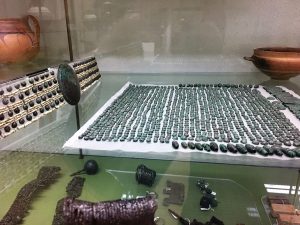 On our way out of Metaponto we stopped at the third site for our lunch. This was the Temple of Hera, also known as the Tavole Palatine, a temple with 15 Doric columns still standing, set in a small park with benches and some children’s play equipment. It’s just off the SS106, and on it’s own makes a nice rest stop for lunch if you happen to be travelling along that road. It’s another freebie and we got the place to ourselves for lunch, we had the added bonus of the smell of freshly mown grass  – who would complain? 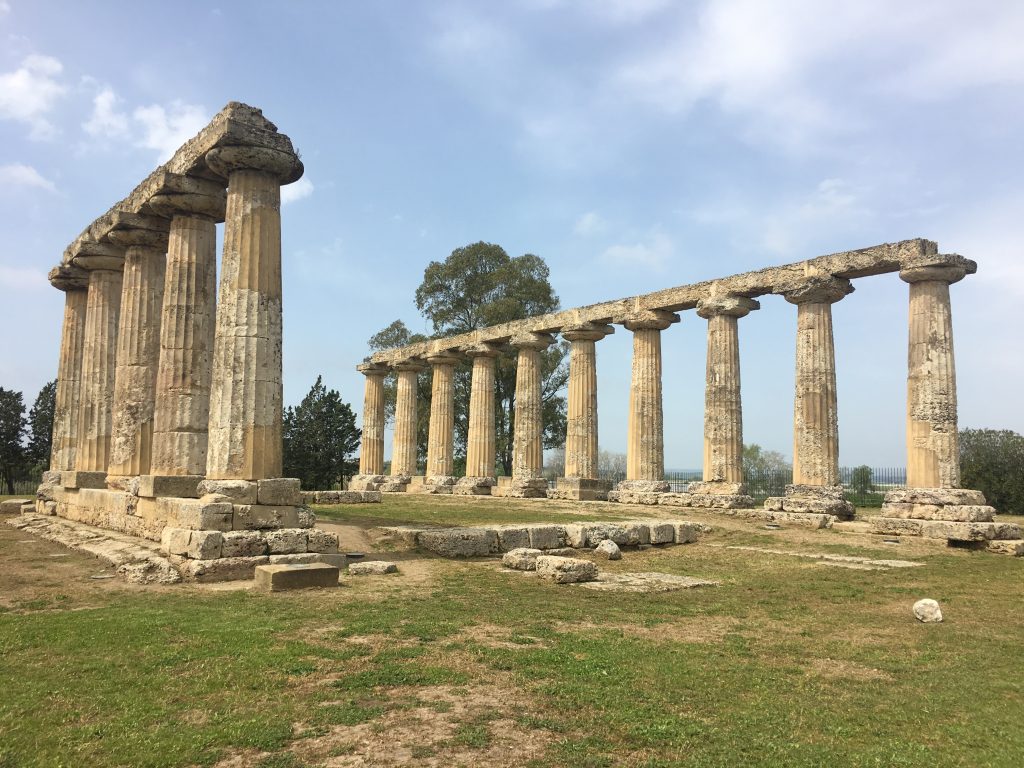 We’d managed to while away a large part of the day and were pleased to have stopped here, even though we wouldn’t make a detour for it. Now it was time to head to Matera, a place we had heard much about and were looking forward to.