From our campsite in Hayfield we needed to make our way to Hope in the Edale valley and the second leg of our Peak District adventures.

The first challenge was navigating our way out of Hayfield, being a Monday and having gained a little experience of the traffic conditions we found leaving much easier than arriving.

The second challenge was choosing a route. The most direct road to Hope was via Winnats Pass, we opted out of this as our target campsite advised against it. Now that we’ve walked in the area we would say that Winnat’s Pass is perfectly navigable in a motorhome, but probably best avoided in peak season as its narrow in places and steep, There are a few you tube videos if anyone wants to see.

Instead we thought we would be driving via Chapel-En-Le-Frith. Our Sat Nav thought otherwise, but we couldn’t see any reason why, so we ignored it in favour of Google maps. The trucks coming from the other direction gave us confidence that we were right to continue despite the constant orders to ‘take a U-turn’ and we finally found the cause of the sat-nav’s mini meltdown at New Smithy where the arched railway bridge forced us to drive in the middle of the road. The sat nav must have been watching the 2.6m height restriction at the lower point of the arch rather than 3.9m at it’s apex. It does that sometimes.

We called in at Aldi on the outskirts of Chapel-En Le Frith to pick up some supplies before moving onto Hope. The warm day and the nearly empty car park made us think of happy touring days on the continent. It’s not that we always stop at Aldi or Lidl, but they generally are in convenient locations.

Laneside is in a good location, not quite a close to Castleton as we’d hoped to be (excuse the pun), but on a bus route and a few minutes walk to Hope train station. They had an odd restriction on left hand drive units which always seems very out dated to me, possibly based on caravans rather than motorhomes with the flexibility to drive or reverse in to a pitch. Regardless we didn’t argue the point and ended up on one of their hardstanding pitches. 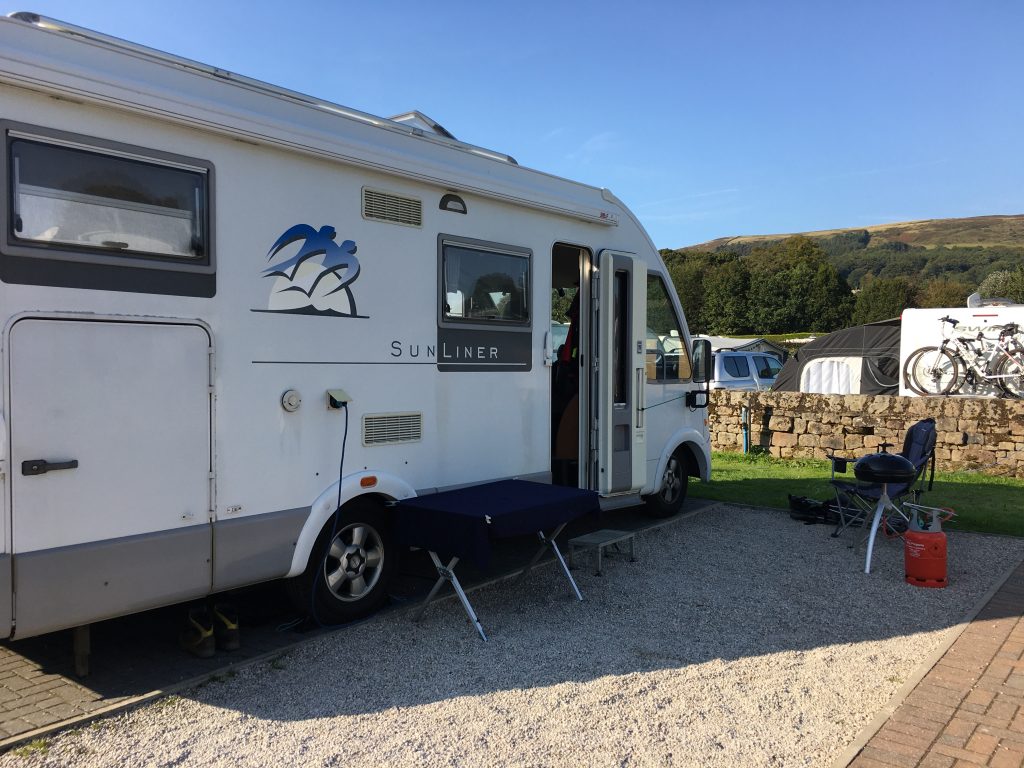 Parked up at Laneside

Unlike Hayfield, where the facilities had been closed, Laneside’s facilities were open with just a one way system to keep people from bumping into each other. We’ve seen a lot of different ways in which campsites have tried to adhere to the Covid guidelines, I dont know which I prefer. I dont feel overly paranoid about sharing facilities so long as they are cleaned regularly, which these were, and I always make sure I wash my hands thoroughly, which seems to still be the number one best way of avoiding the virus if you want to get out and about.

We could hear the odd industrial clanking while we were pitched up and finally saw the culprit on one of our strolls. The distant cement works were like a castle on the slopes above the campsite. 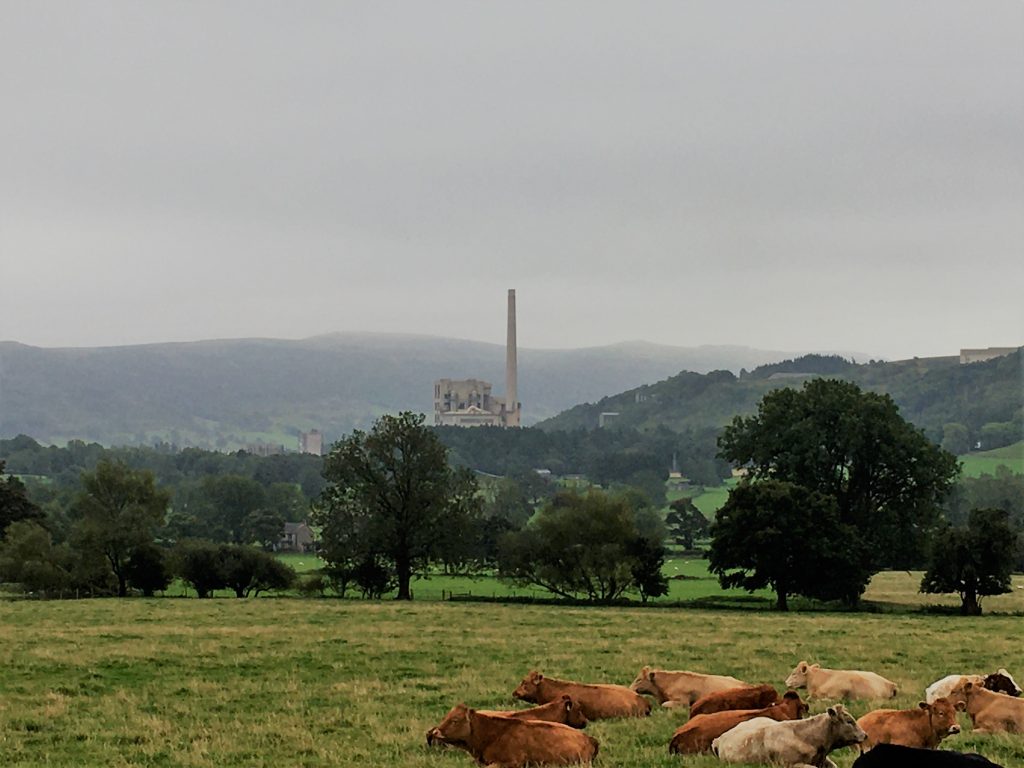 A short circular walk from Laneside Campsite to Win Hill

The weather was glorious by now, sunny skies and as warm as a mid-summer’s day. Keen not to waste any time we decided to walk from the campsite up to Win Hill, easily viewed from the campsite. As well as being a lovely short afternoon jaunt, this gave us the opportunity to suss out the early stages of a bike ride the following day. We crossed the busy road and walked along the river for a short while before heading under the railway line to the village of Aston. From the village we took a track off Edge Lane, a route we would follow on the following day, and then turned off uphill to finally reach the rocky outcrop that is Win Hill, with glorious views across the Ladybower reservoir. Large amounts of flying ants made any form of relaxing impossible so we quickly took in the views before descending the eastern end of the summit to make a loop back to Aston and then return to the campsite. Very happy to have stretched our legs and very happy indeed to enjoy a G+T in the sunshine. 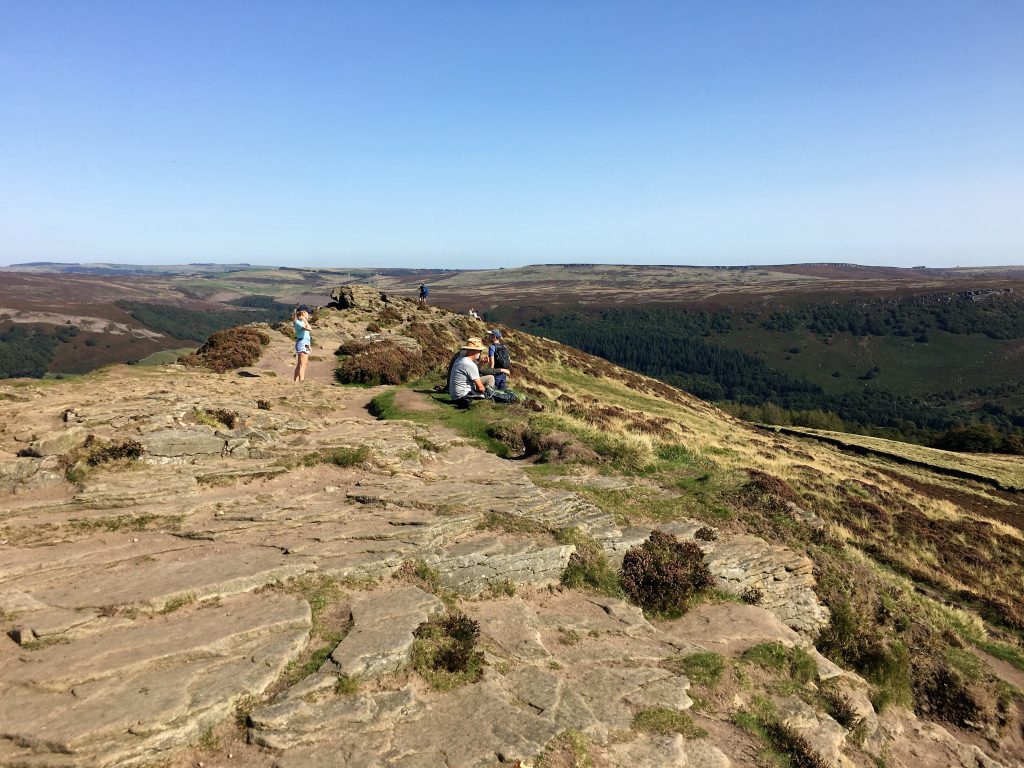 A long cycle from Laneside Campsite around the Reservoirs

The following day was the big one. A long long bike ride (or so it felt to me) from the campsite, all the way around the connected Ladybower, Derwent and Howden reservoirs, a mix of off road, cycle track and country lanes (and one section of main road). Oh, and a pub.

We set off early in the hope of avoiding the worst of the heat that was forecast. 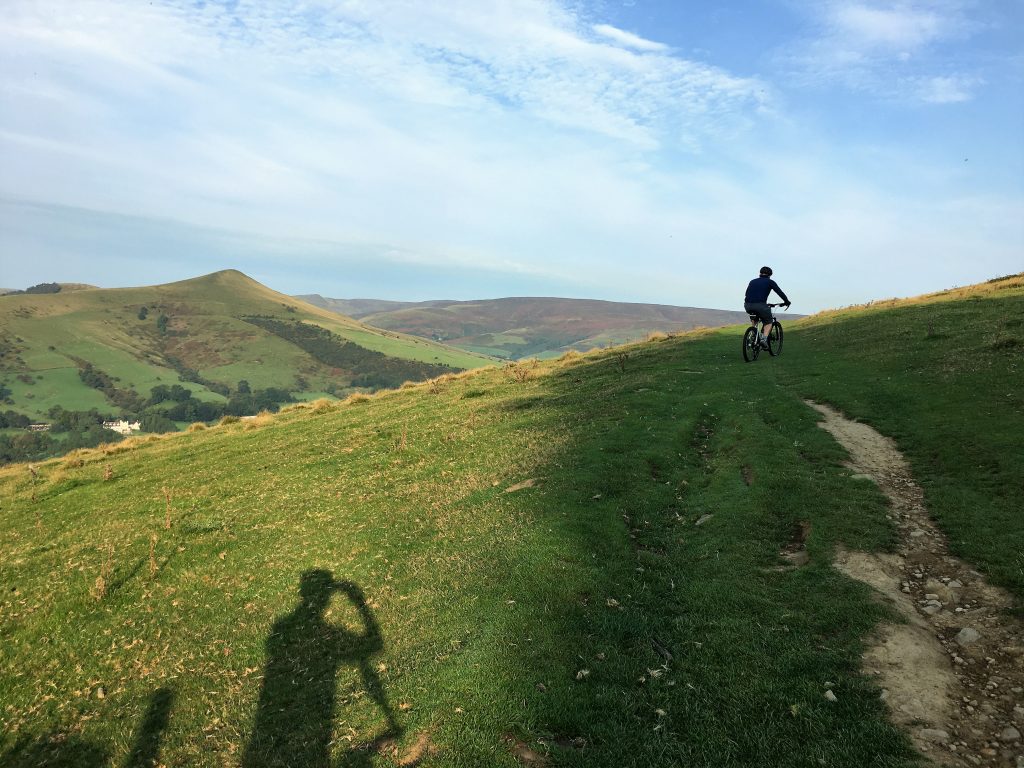 Along the Roman Road above Hope

The route started by going up through the village of Aston and taking the track off Edge Lane we had walked up the previous day. The track was stony and hard going at first until we got above the tree line where it levelled off a bit and followed, for a short while, the route of a Roman Road. After this pleasant green-ness things got rocky again as we descended to Rowley Bridge where I had to stop for a repair. My lack of focus meant I left my chain a bit slack and managed to catch it on a rock, twisting one of the links which needed to be straightened out before we could continue. I am always thankful for Paul’s resourcefulness and practicality in situations like this. 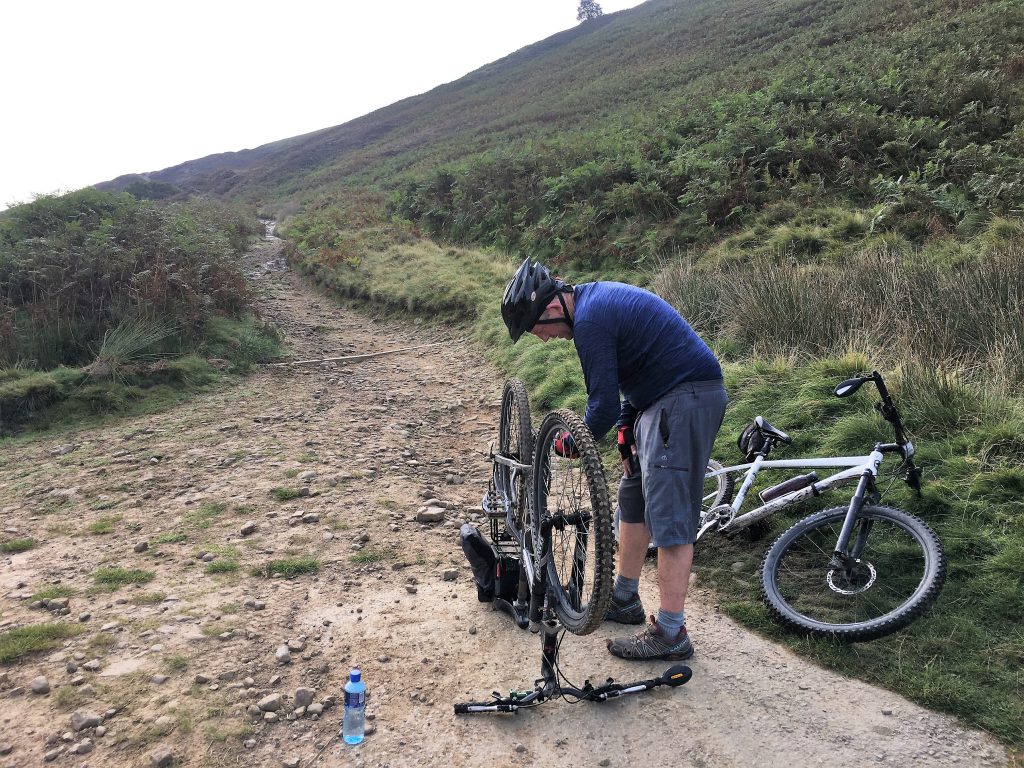 Repairing a bent link in the chain. It almost spelled the end of our ride.

Once over the river and across the A57 we were off road again, back uphill and past the outdoor centre then back downhill along some nice single track through the forest to the edge of the reservoir.

That was the end of the ‘proper’ mountain biking (apart from one stretch near the pub). We stopped by Derwent Dam for a quick sandwich and to admire the unfeasibly still water. This is one of the reservoirs used to practise deployment of Barnes-Wallace’s bouncing bomb (coincidentally the Fleet Lagoon, location of our last motorhome trip, was also used for this purpose). The museum wasn’t open but we were treated to a fly by from two noisy low flying jets. 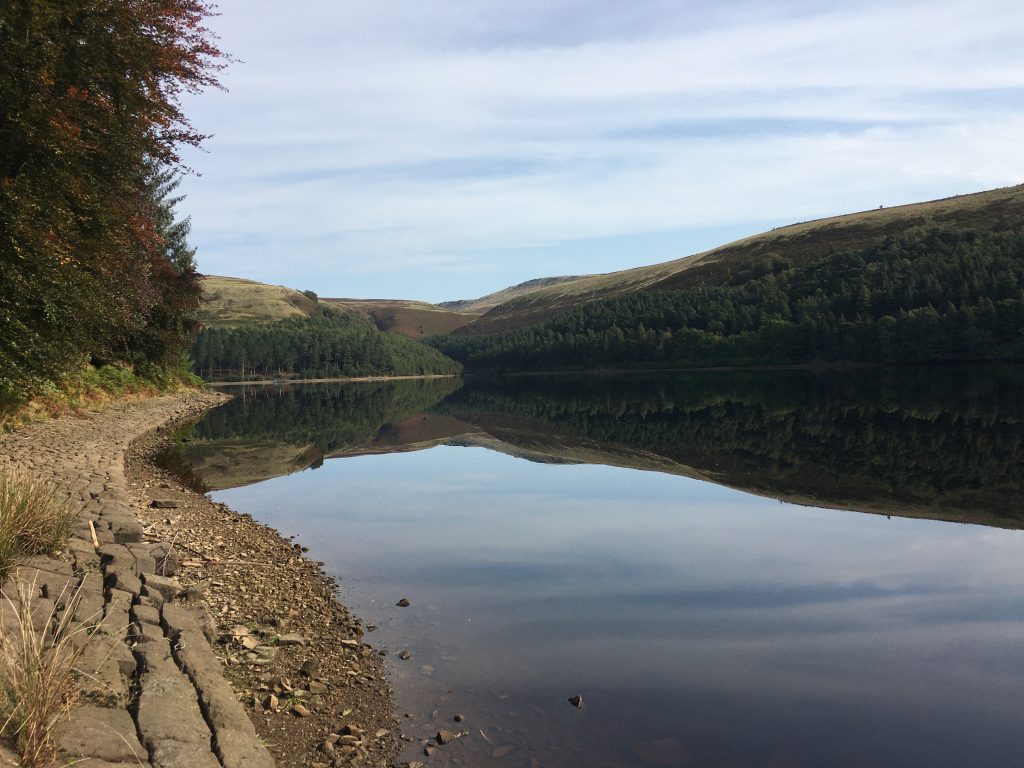 After enjoying our short break we cycled all the way up the western edge of Derwent reservoir and then onwards past Howden dam and along the edge of the Howden reservoir. Eventually the single track road came to and end and we moved onto the cycle track, taking us to the point where the reservoir came to an end and we reached the River Derwent at Slippery Stones. The old packhorse bridge here had been moved from Derwent village when the Ladybower reservoir was created in the middle of the 20th century. 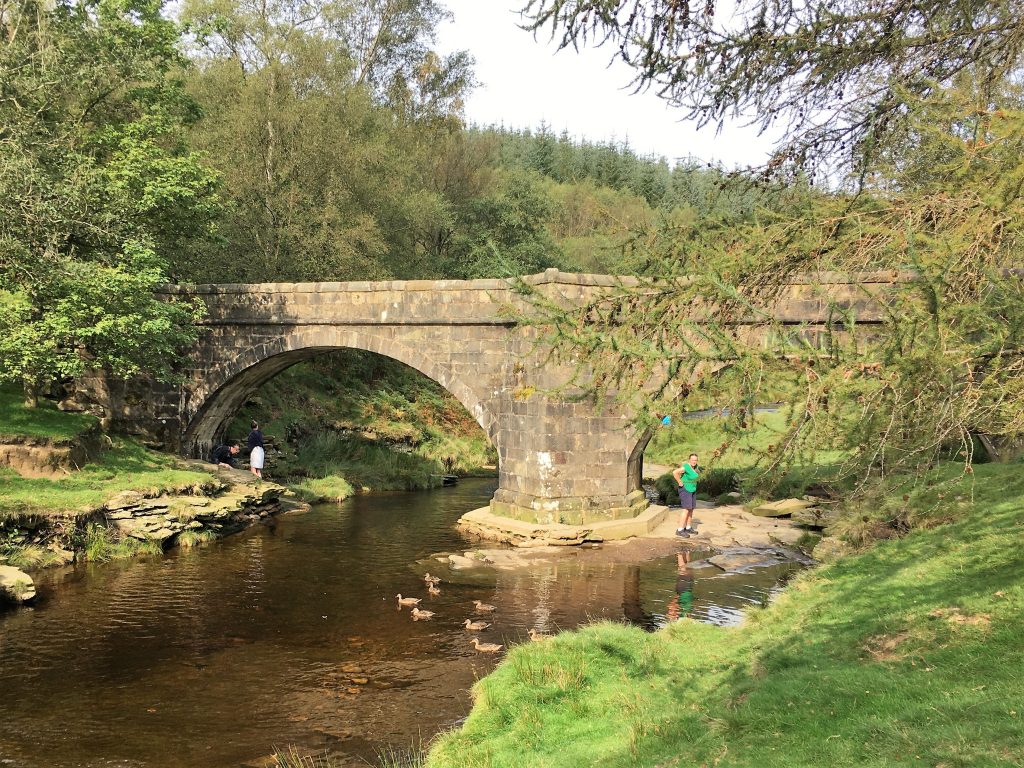 The cycle path continued down the far side of the reservoirs, a route that was busy with cyclists and pedestrians. We followed it all the way to the A57 where we took a short and painful detour off road above the busy main road which allowed us to drop down to the Ladybower Inn. This pub is well known for welcoming Motorhomes in the car park, but for today it was just a welcome stop for a couple of refreshing pints in the hot sunshine. 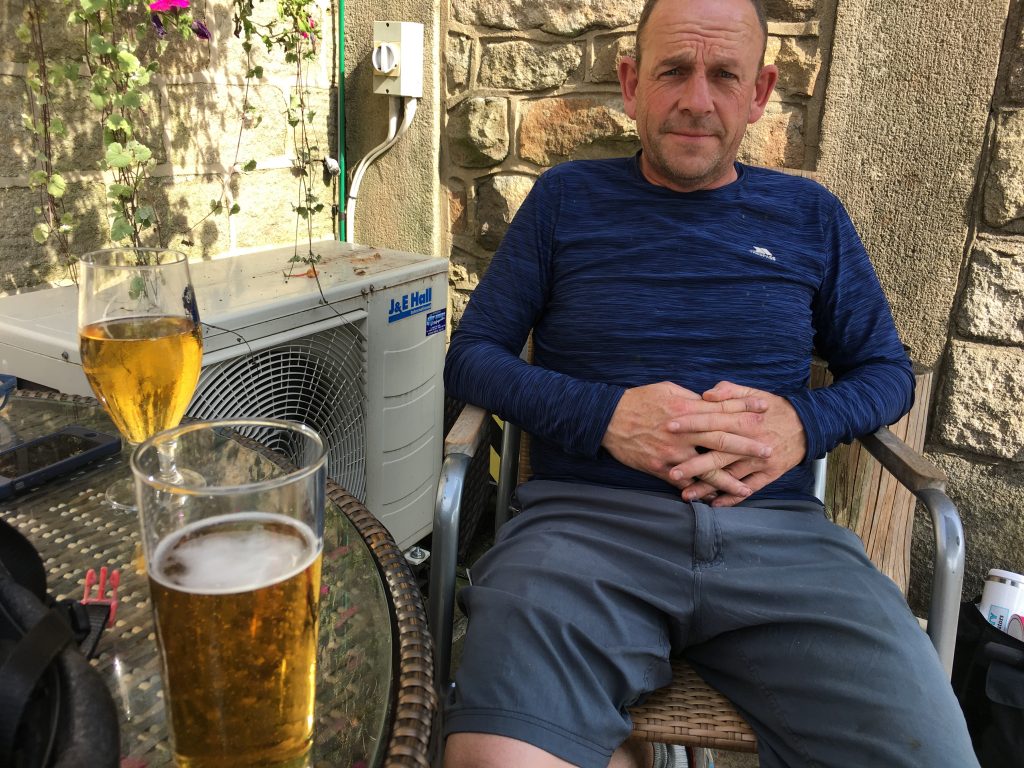 Enjoying a pint (or two)

Our final stretch, buoyed up by our alcoholic refreshment, took us down the main road to cross the dam and then follow the minor roads back to the village of Aston and finally to our campsite.

The whole ride had been 40km and taken 5 hours, not including our rest stop at the pub. We were back to the van by early afternoon for more relaxing, feeling a sense of achievement.

A bit of the Edale Skyline

We had a restful day after our bike ride, just taking a short walk across fields to Castleton where we did the tourist thing, tea and cake and window shopping for the famous Blue John stone. Then we were ready to tackle our next biggish walk.

The intention had been to tackle the Edale skyline – a 20 mile walk of the fells around Edale. There are a few variants of this but generally it includes Win Hill, Kinder, Mam Tor and Lose Hill as well as all of the tops in between.

Paul’s knee was playing up and there was no way that he wanted to do a full 20 miles, so we planned a 12 mile section that took full advantage of the local train service to get us from Hope into Edale. A six minute easy train ride.

The Vale of Edale looked idyllic in the warm and sunny weather. We followed many fleece clad and rucksack toting walkers along the neatly slabbed path along the valley and up through the rocky ravine of Grindsbrook Clough. It’s called a scramble by some but is a fun clamber with nothing exposed or difficult, we took the right hand fork as we’d been advised it was a bit more exhilerating. 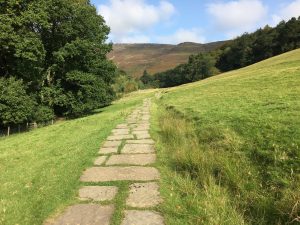 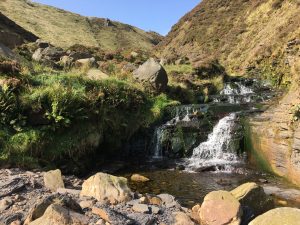 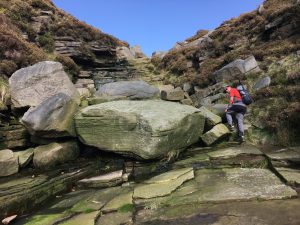 Clambering up the Clough

Once at the top of the clough we were back on the Kinder plateau and could follow it’s edge west, through deeply scribed channels in the peat and past spectacularly eroded towers of gritstone. Along the way there were many named features; Crowden Tower, Pym Chair, Noe Stool and the Woolpacks. 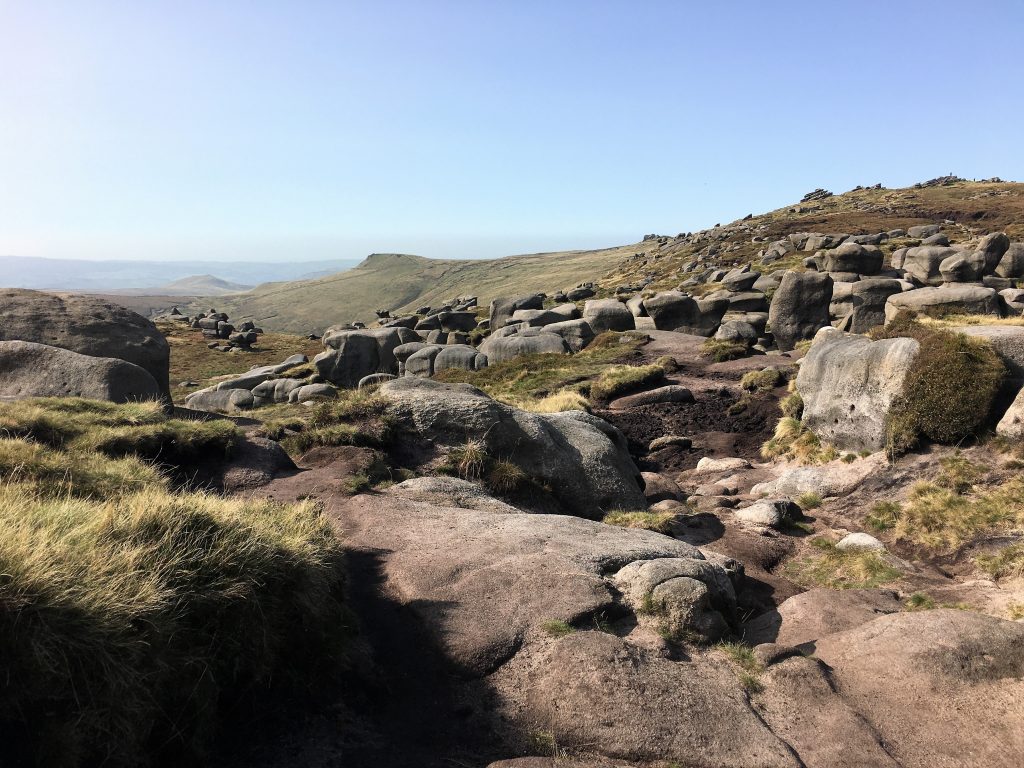 The many rocks of the Woolpacks.

As we took the southerly path across Edale Head from the edge of Kinder towards the southern side of Edale Vale, we crossed the largely featureless bog lands of Brown Knoll. Thankfully a paved pathway marks the way and there is little concern of getting stuck in the peaty bogs. You might think the main risk would be succumbing to the tedium of the landscape, but it’s more interesting than it first appears. Dotted across the landscape here are lonely chimneys for the trainline that runs under the moors from Edale through to Chapel Milton to the west, and through the landscape you can see evidence of the steps that are being taken to try to control the erosion of the peat that is carried off the moor due to loss of vegetation and too many human footsteps. 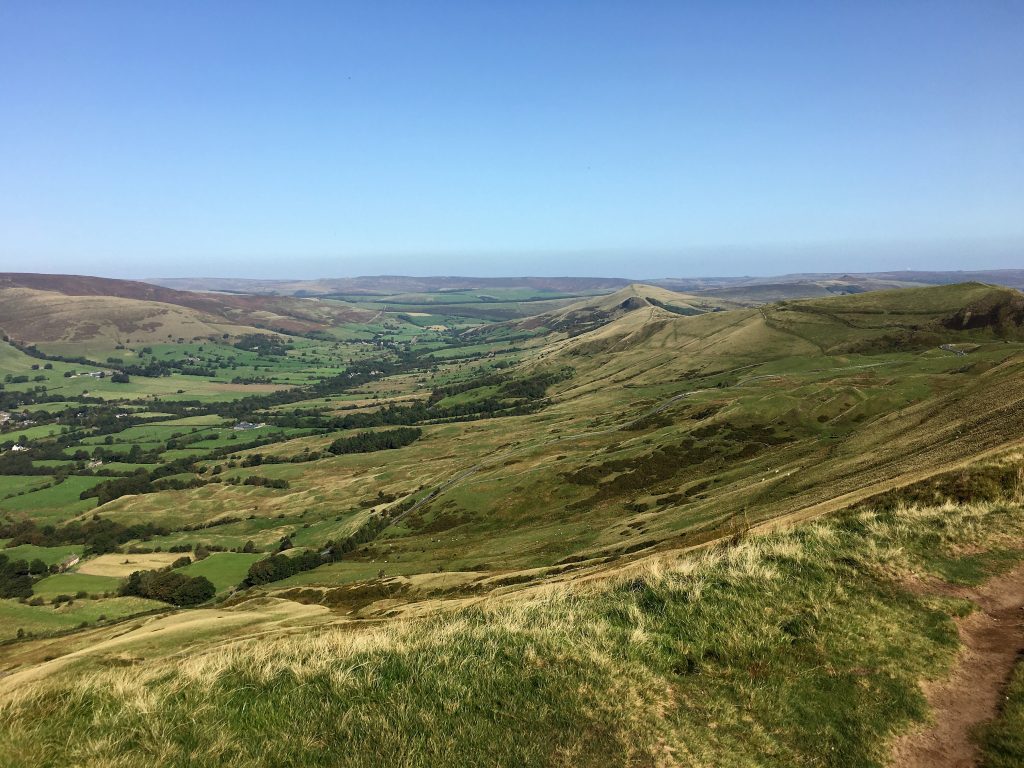 The Vale of Edale

The landscape becomes more traditionally interesting as you turn towards Lords Seat and the eastern leg of the journey, but it was here that Paul’s knee started to get more painful and he was slowing down and getting grumpy. We decided we would cut the walk short by dropping down to Castleton and getting the bus back to the campsite. We made it as far as Mam Tor before descending together down Winnat’s Pass to Castleton. We still managed about 12 miles but the last few miles were easier going than our original plans and we also passed by a bakery for sustenance. One day we’ll come back and do the whole thing.