As we head into another period of lock down it seemed like an opportunity to look back on our last full week of freedom in Bertie.

We had booked a week off work in September, hoping that we would be able to use it, Thoughts of travelling abroad were soon dashed and so the UK was going to be our destination. We had decided to just go where the whim took us, taking advantage of the best weather we could find, but the reports of fully booked campsites and bad feeling about ‘wild camping’ made me lose my nerve about two weeks before and book up some campsites in the Peak District.

It probably was the right move, there weren’t any campsites that had availability over the whole period and so we ended up booking three campsites. To our delight the weather forecast slowly improved from dreary and cool to sunny and warm and our packing list changed from thermals and waterproofs to t-shirts and shorts. Paul started to worry that the weather would be too warm and I started to dream of lazy afternoons reading and drinking G+T in the sunshine.

Our first stop was a two night stay at the Camping and Caravanning site at Hayfield. We set off early on Saturday morning, trying out our new routine of packing all of our necessities into Paul’s van and taking it to our storage unit rather than bringing Bertie back to the flat and trying to find parking. 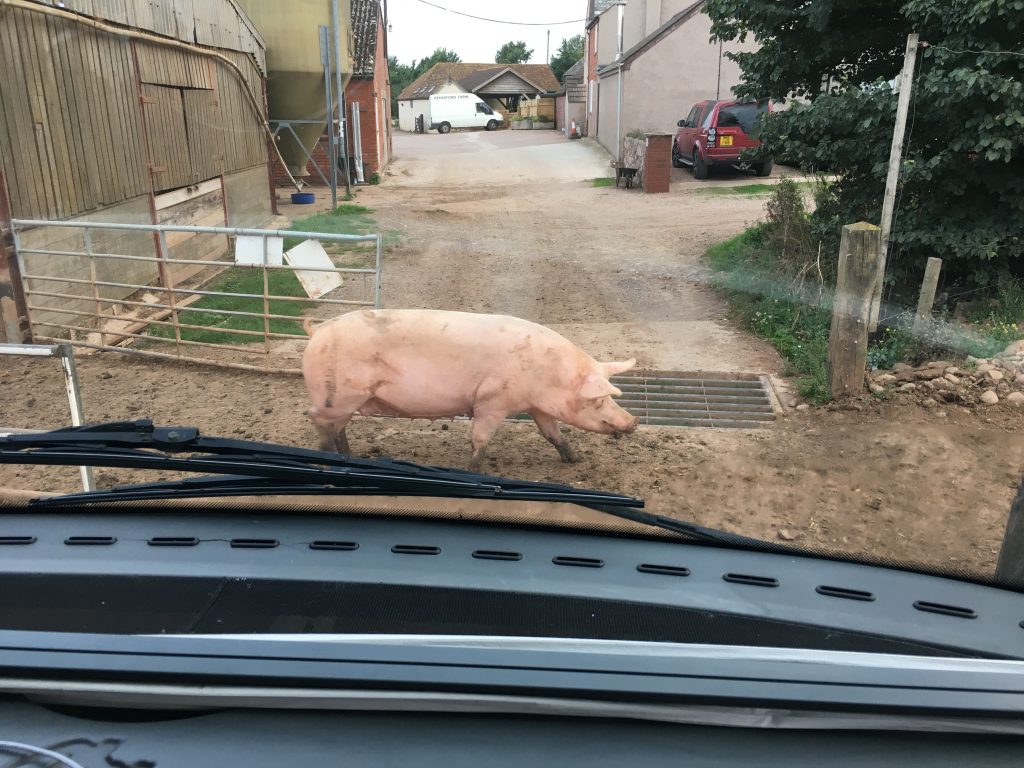 Waiting for the pig to let us out of the farm

I’d read a few reviews of the campsite and it mentioned the rather tight access to the campsite through Hayfield village. In fact the campsite doesn’t accept caravans because of the access issues. I got rather nervous about the final couple of miles, which wasn’t helped by sat nav confusion taking us the wrong way just before the village. In the end it wasn’t too bad, although I was very happy to turn up in the middle of the day when there weren’t too many people arriving or departing to walk in the hills, timing appears to be key here as we noticed when we witnessed the chaos of late afternoon departures. The issues are two fold, firstly a sharp turn up the short narrow hill of Bank Street, luckily easy to see whether there are any vehicles coming the other way. Then the long narrow stone-walled Kinder Road with cars parked along most of it and the occasional space reserved for passing. It just took a bit of patience and we finally arrived at the campsite. 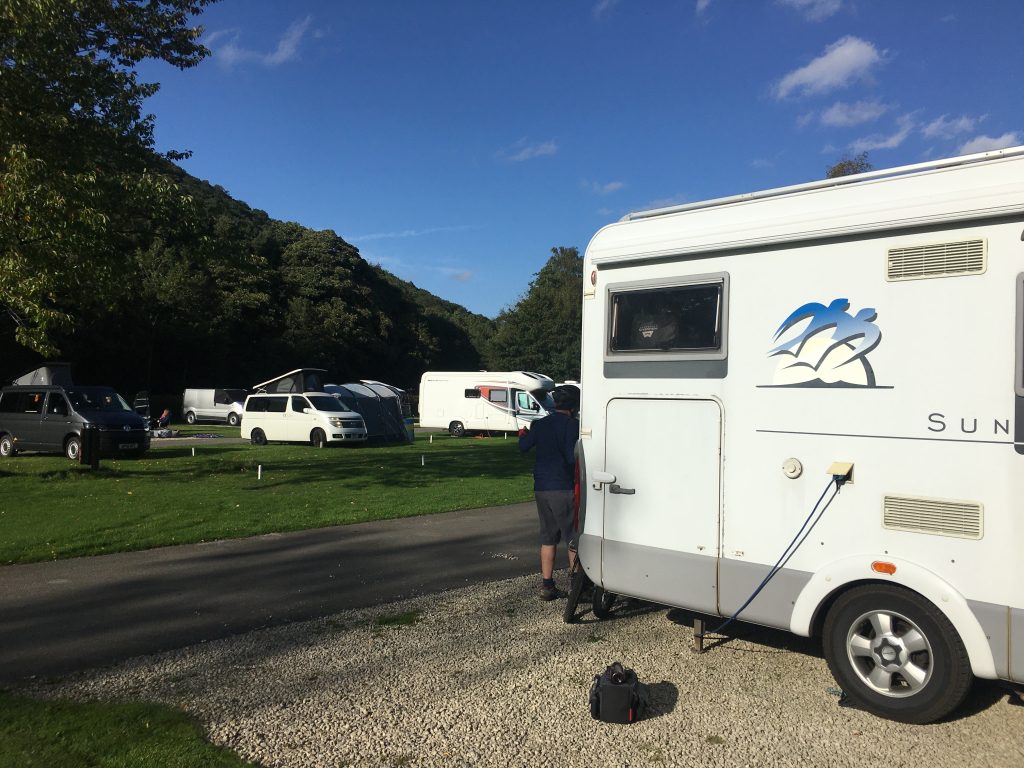 Our arrival had been early enough to get settled in and still have plenty of afternoon left to do something. We decided on a short bike ride along the Sett Valley trail to New Mills. We extended this short leg stretcher by leaving our bikes at New Mills Central Station and wandering around the Torrs gorge, taking in the Millenium Walkway that skirts the edge of the wall and provides views of the river and mills. On the way back up from Hayfield we stopped for a pint in the Sportsman pub which had plenty of outside seating. While here we managed to spot a Peregrine Falcon flying overhead which was rather exciting but sadly not much of a photo opportunity.

On the Sunday we were off up to walk Kinder Scout from Hayfield. The nearby Bowden Bridge quarry was the starting point for the Mass Trespass of 1932, an event that is firmly embedded into popular history as an act of successful peaceful rebellion (although maybe not quite the whole story) pivotal in providing people with the ‘right to roam’.

We weren’t following the route of the trespass, but instead we headed around the southern side of the reservoir and up through the lower moorland to the jumbled gritstone of Cluther Rocks, and taking in a short scrambly section at the top of  Red Brook. 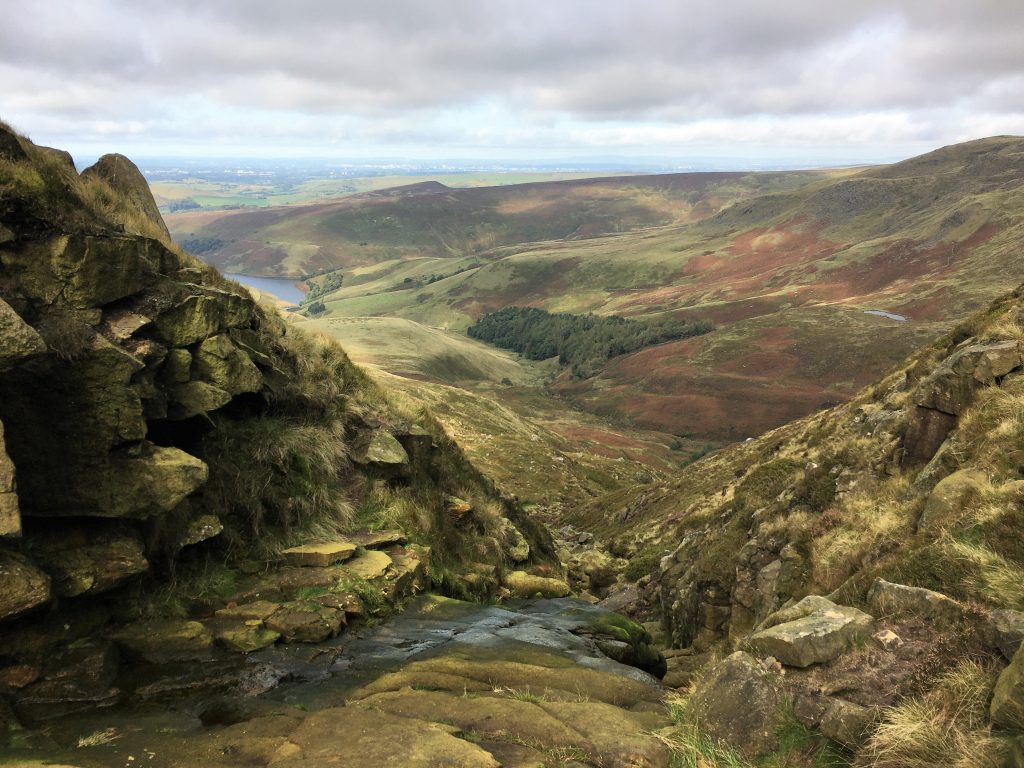 Looking back down Red Brook and across to the Kinder Reservoir

At the top of Red Brook we were on the peaty moorland plateau that is Kinder Scout. Although it has a ‘highest point’, you wouldn’t recognise it as a peak from up here and we weren’t interested in slogging across the moor to find it. We were following the more interesting edge of the plateau northwards around to Kinder Downfall and then around to the top of William Clough where we would make our descent. 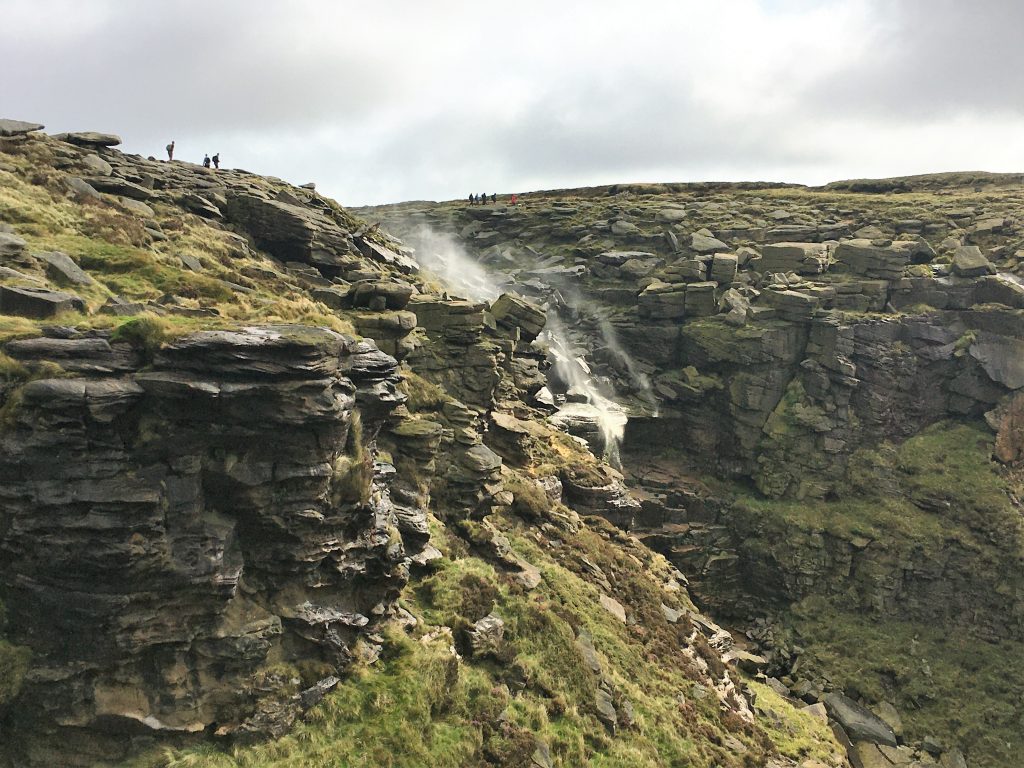 The waterfall of Kinder Downfall, being blown upwards by the westerly wind

We regretted our decision slightly to descend William Clough, it’s a nice enough path but seems to be the most popular route up from Hayfield and we found ourselves often stepping to the side to allow people to climb. We finished the walk down by taking Snake Path to reach the road halfway between the campsite and Hayfield and then crossed the river to walk the path back up to the campsite. It had been a good 9 miles and 4 and a half hours and we were happy to spend the afternoon chilling in the sunshine (or, in Paul’s case, in the shade).

On the Monday morning we had to move on, but we wanted to leave it as late as possible so that we could get onto our next campsite and not have to find somewhere to park up in the interim. We had a wander around the pretty lanes and paths between the campsite and Hayfield. 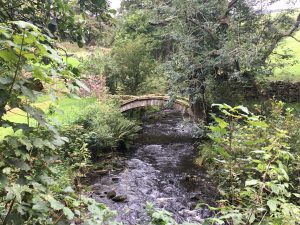 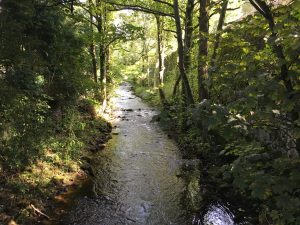 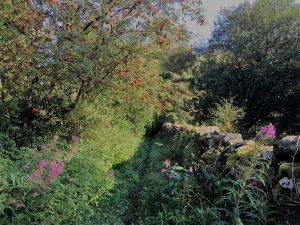