Moonfleet, by J.M. Faulkner, was a favourite book of mine when I was young. I remember the cover of the edition from my bookshelves, the Puffin Classic edition with mysteriously cloaked figures silhouetted against the moonlight. I’m pretty sure it also had the BBC logo across the top of the purple cover. I knew the contents of my bookshelves very well, each book re-read many times and re-arranged into alphabetical order (by author, of course) on the odd occasion I’d had enough of reading.

The BBC adaptation was obviously the one that spurred me to read the book, but it’s been adapted for the screen so many times that almost every generation will have seen a version of it. A story of smuggling and adventure and an eventual, belated, happy ending.

It was only when researching walks in the area of East Fleet Farm touring park that I realised the connection between the book and the location of our third long weekend motorhome trip of the summer. For some reason I had always imagined the book to be set in Cornwall, not here by the long lagoon, the ‘Fleet’, behind the enormous pebble bank of Chesil Beach. 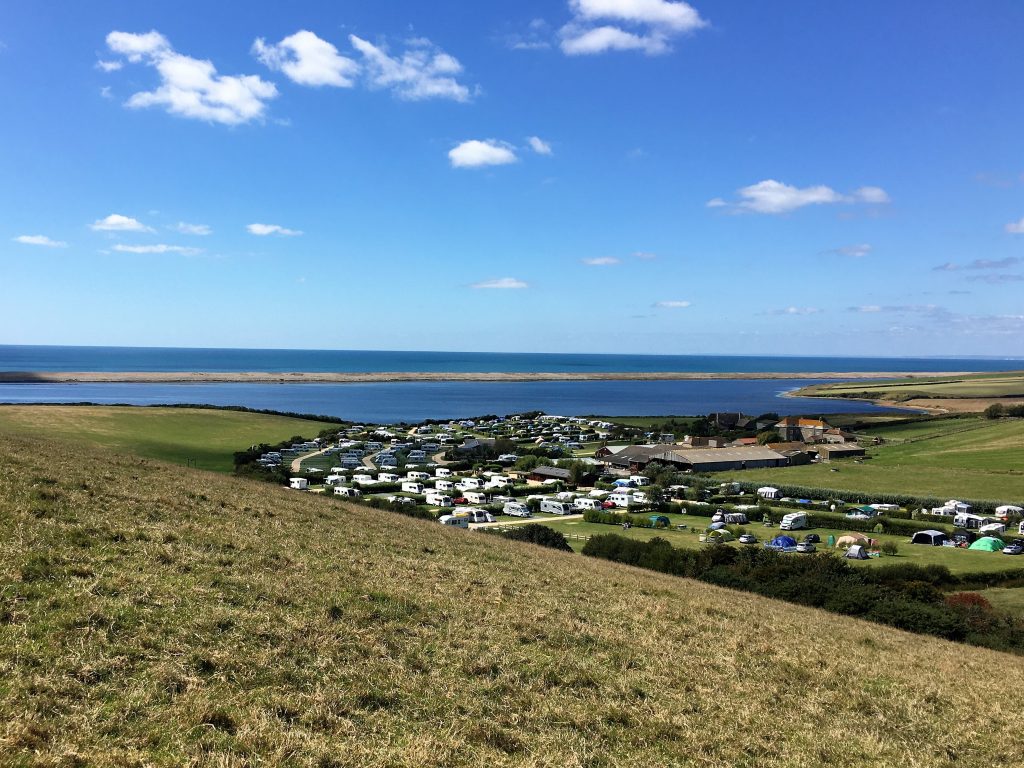 Looking over the campsite at East Fleet

Even the on site bar – the Why Not? – tipped a hat to the inn in the novel. East Fleet village was the inspiration for the more romantically named Moonfleet, and several landmarks, including the church are said to be a direct inspiration for the locations in the book.

Our last full day at the campsite also had a literary connection, or so I thought. We took the bikes for a cycle ride through lanes to Abbotsbury Swannery where we’d booked our COVID controlled appointment to wander around amongst the swans plus geese, ducks, moorhens and coots. The aroma of bird droppings reminded me, nostalgically, and not unpleasantly, of owning our own chickens back in the days before motorhome travel. 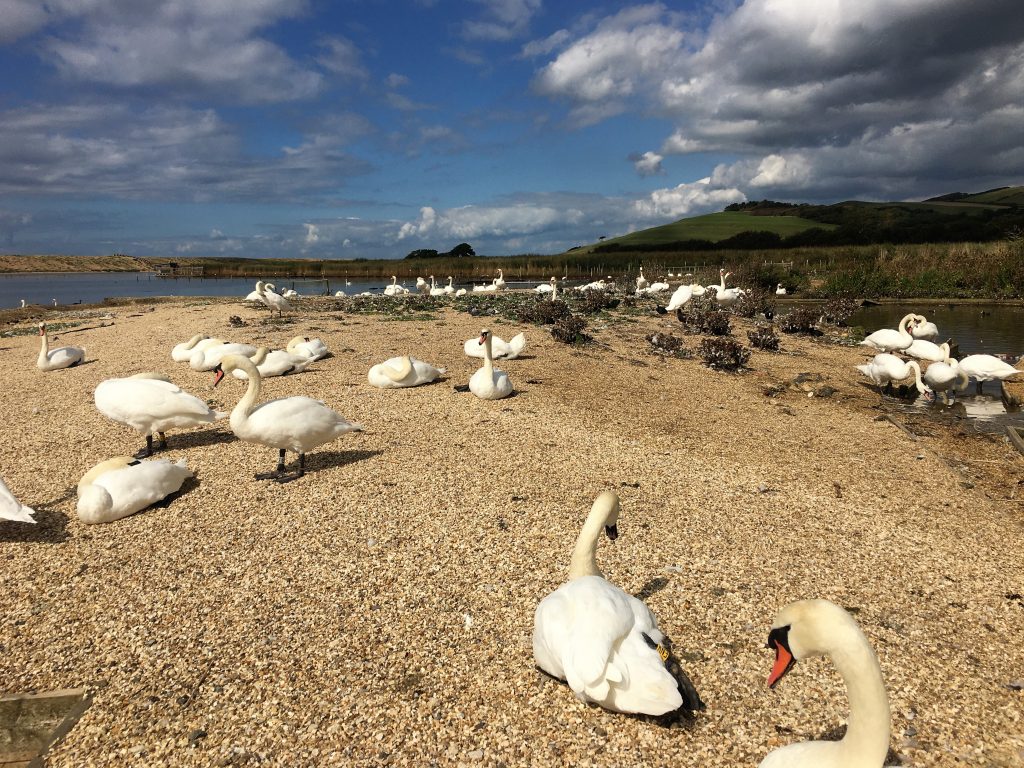 Lots of Swans at Abbotsbury

After our stop off at Abbotsbury we climbed through steep narrow roads up to the Hardy monument. For some reason I just assumed that the monument to Thomas Hardy was to ‘that’ Thomas Hardy, author of Tess of the D’Urbervilles and famous Dorset resident. How wrong I was. In fact the monument was erected when the author was only 4 years old, to the Thomas ‘kiss me’ Hardy famous for accompanying Admiral Nelson.  The fact that the tower is in the shape of a spy glass should have been a giveaway, but in all honesty it just looked like a tower to me. Thank goodness for information boards. 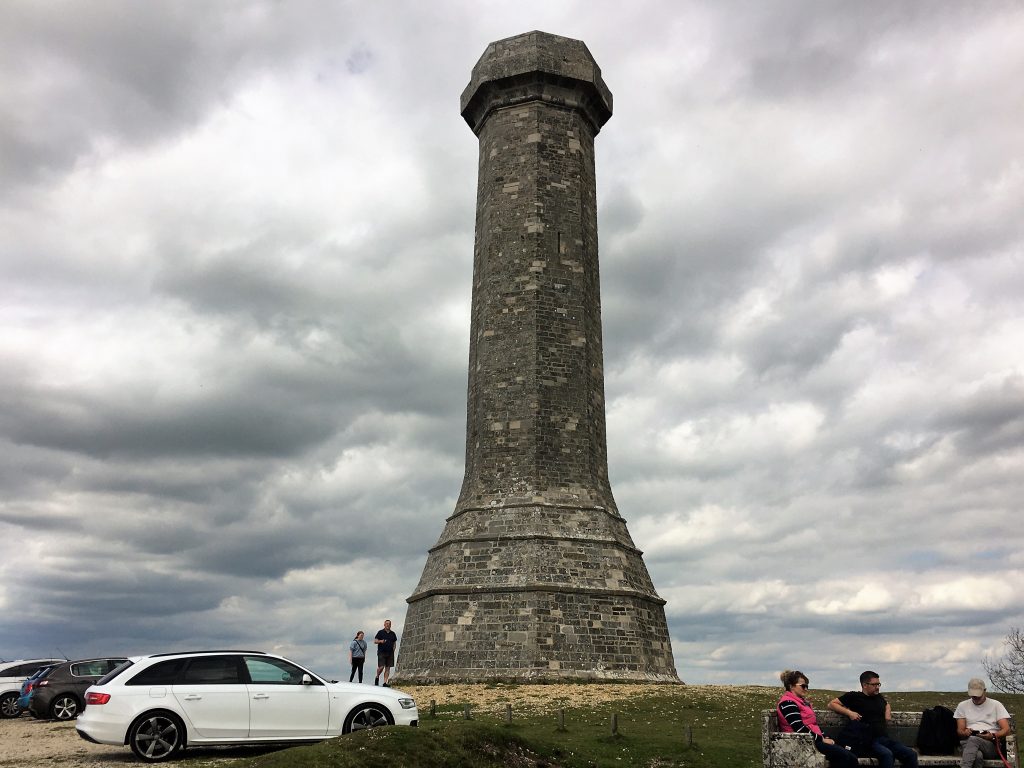 The Hardy Monument on the Dorset Ridgeway

After I had been corrected, we followed the South Dorset Ridgeway bridle path back across to Upwey and then cycled through some very attractive (and expensive I’m sure) villages back to our campsite. A very satisfying ride with enough uphill to challenge and good fun off road. 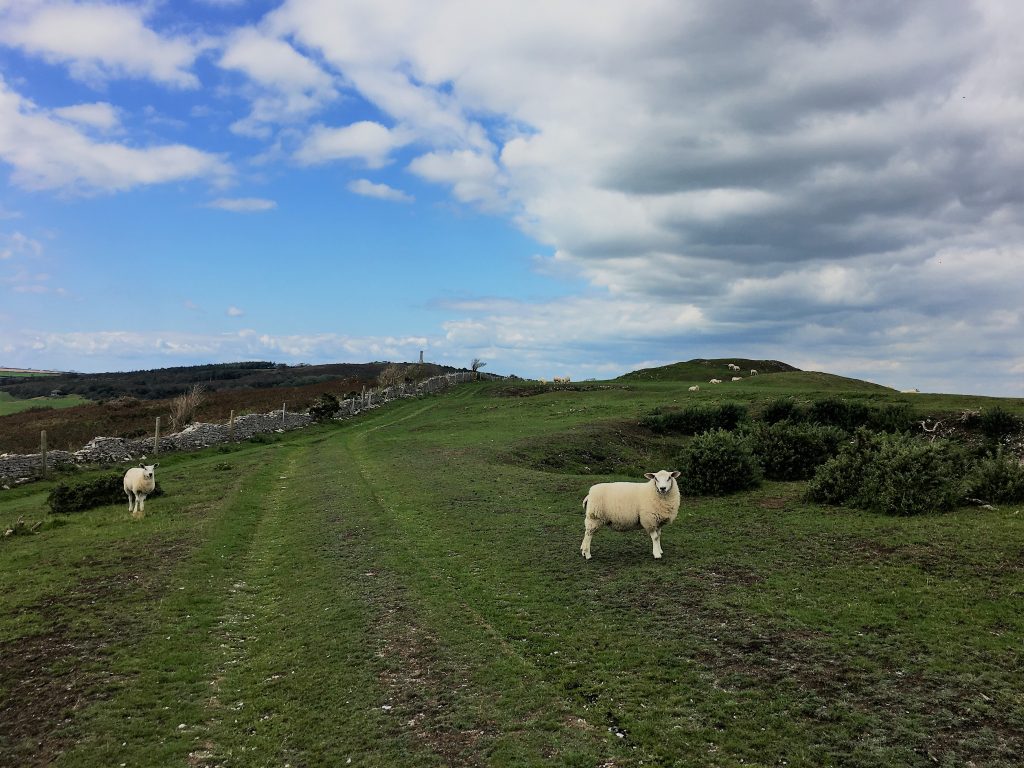 That was our second bike ride of the trip. The first had been a less pleasing cycle to the tip of Portland Bill. We followed some fairly uninspiring cycle paths around Weymouth and down across the causeway to Portland. Once there we had a difficult uphill pull to the highest point on the ‘Isle’ (where, by-the-way, there was some very nice motorhome parking) and found ourselves on roads all the way to Portland Bill. 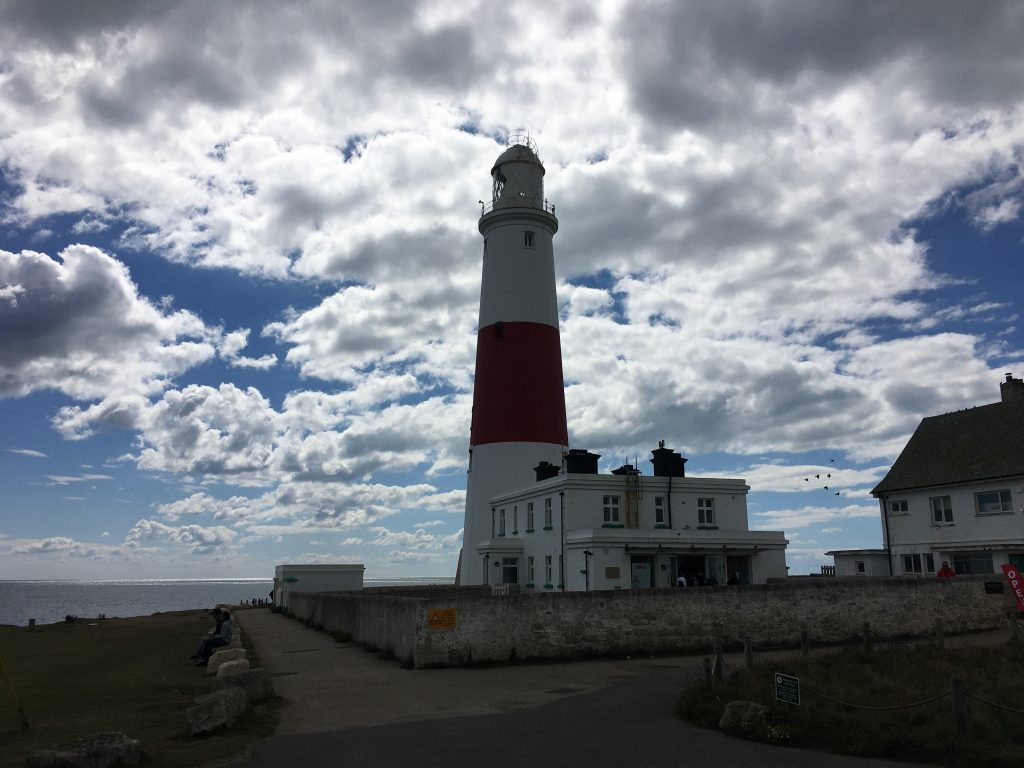 For the trip back again we tried to add a bit of variation but there was something about the cycle ride that just didn’t do it for me. 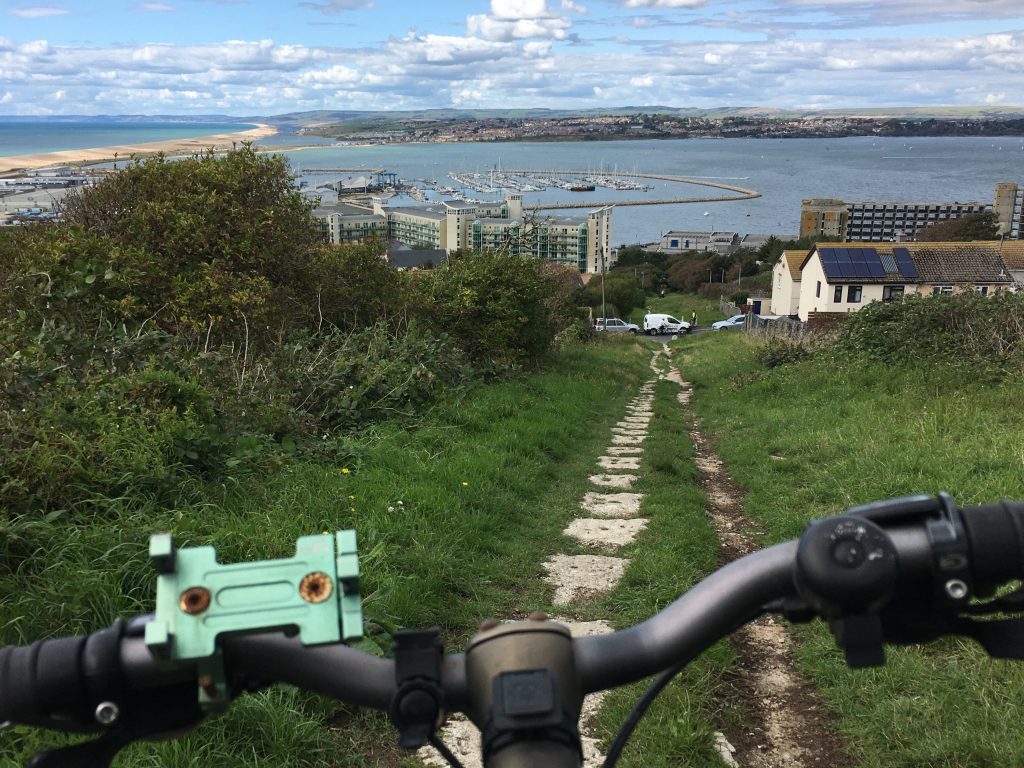 A consolation was a visit to the sculpture park at Tout quarry on the way back. The old quarry, near the highest point of the isle with stunning views across to Chesil beach, is now a maze of paths and sculptures of varying quality and a lot of interest.

As well as bike rides we enjoyed some coastal walking around the edge of the Fleet in both directions. Heading east we found multiple paths along the back of the fleet and up amongst the fields, all bounded by hedgerows of ripe purple sloes and blackberries. I love this sign of the onset of autumn, a promise of Christmas Gin to come. 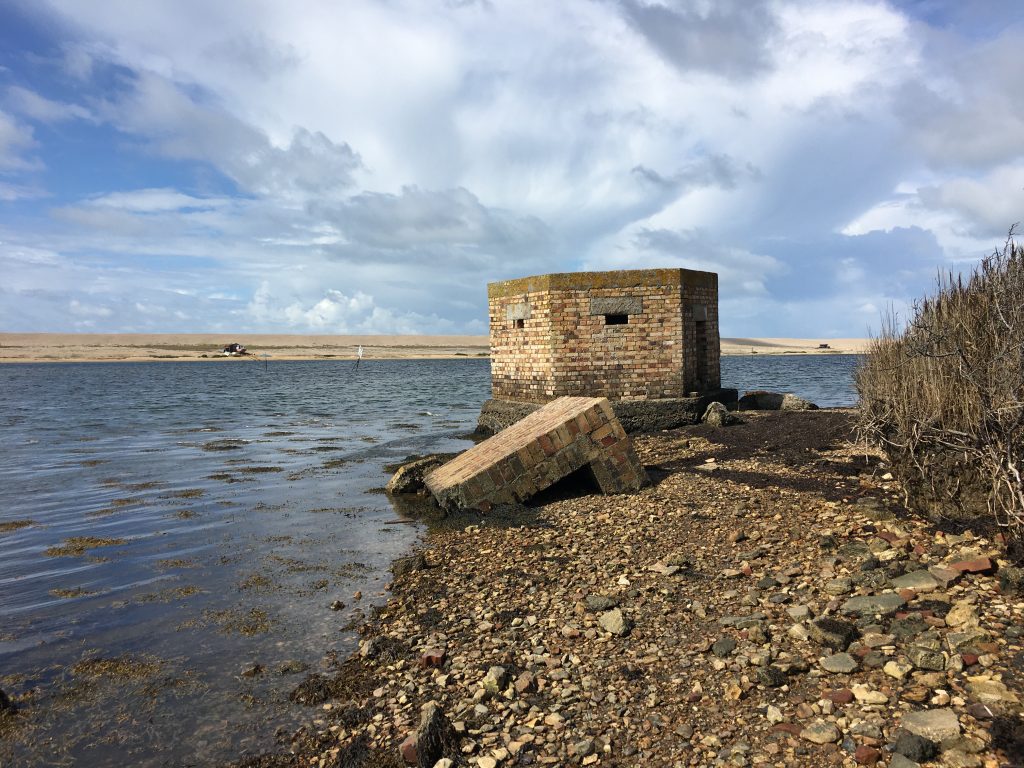 Following the edge of Chesil Beach 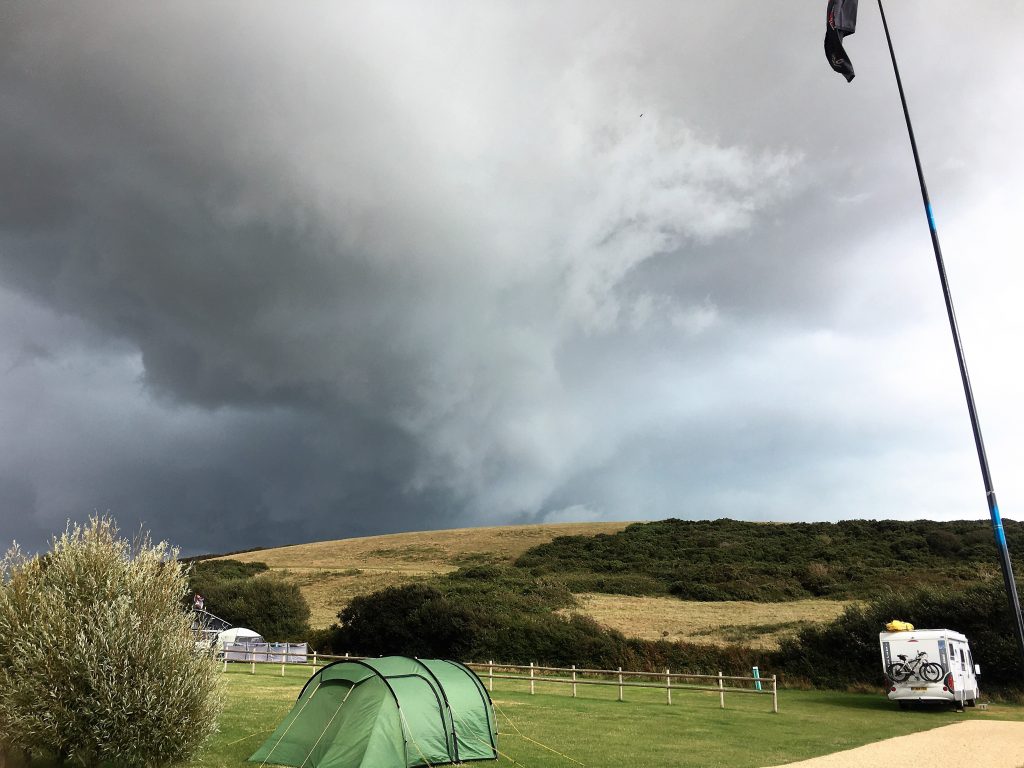 Luckily the threat of thunderstorms never materialised into more than a shower and some dark clouds.

1 thought on “Why Not? Literary connections?”