Staying in multiple locations has the advantage of making a trip seem longer. It’s also a welcome reminder of the time we spent full-time touring; moving slow short distances from place to place to make the most of the opportunity to park the motorhome as near as possible to the place we want to visit and then move on to the next place.

It’s the type of travelling we enjoy, but this year the big difference is that we have deliberately decided to stay in campsites. The concentration of British tourists in British locations and the proliferation of motorhomes and campervans, hired or owned, have proven a difficult combination. Many people have taken up wild camping in vans or under canvas without understanding the etiquette associated with staying outside a campsite. Maybe they’ve been to festivals where their mess and detritus have been tidied up after them, maybe they’ve been underprepared and panic when they find their toilet cassette full and aren’t sure what to do. Perhaps the issue has been inflated by local journalists determined to find something to talk about rather than COVID. Whatever the reason we didn’t want the stress of feeling we were being judged as ‘dirty campers’, and anyway, it felt that staying in a campsite was a way of adding something back into a starving tourist economy.

After we left Hope we had some time to kill before we could get into our next campsite near Bakewell. We took the road east to the National Trust’s Longshaw Estate where we could use our membership to park up for free and take a stroll. After flexing his knee, Paul determined he was ok to do a few kilometers and so we headed north along Burbage Rocks, an extension of Stanage Edge. ‘Edges’ are a feature of the northern ‘Dark Peak’, gritstone cliffs that form long scars across the landscape between the peat and heather of the moorland. Climbers love their grippy rock, and for many years it was quarried for millstones. 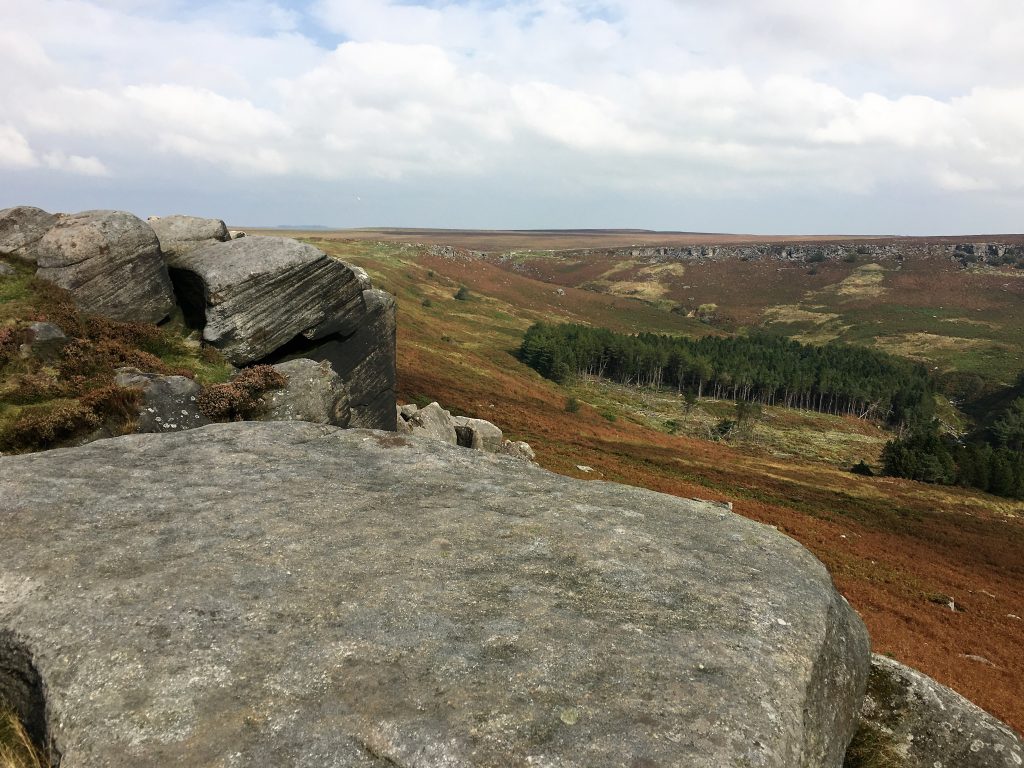 We walked along the top to Upper Burbage Bridge and back via Higger Tor before saying goodbye to the Dark Peak and heading south to Bakewell in the limestone ‘White Peak’ area of the Peak District. 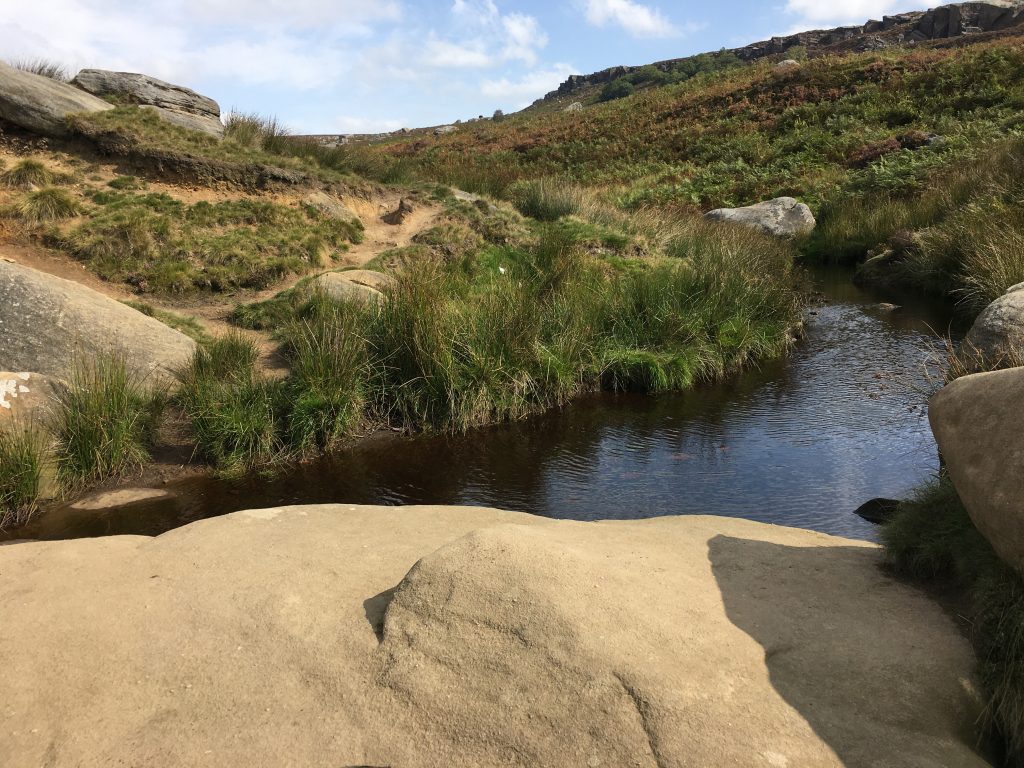 Our campsite here was Greenhills Holiday Park, it was a slightly awkward location for doing the Monsal Trail, but we took the opportunity to do a big loop through the narrow roads south of the A6 where Paul was co-opted into encouraging a run away cow back into a field  – I just watched and felt a twinge of sympathy at the swaying of the cow’s udders, she really needed a good spots bra if she was going to make a break for it. Then across the A6 to the Chee Dale end of the Monsal trail. We cycled along this ex-railway line through limestone gorges and through old tunnels. Sadly we don’t have many pictures as I was too busy cycling and often forget to stop and snap as the scenery flies by. 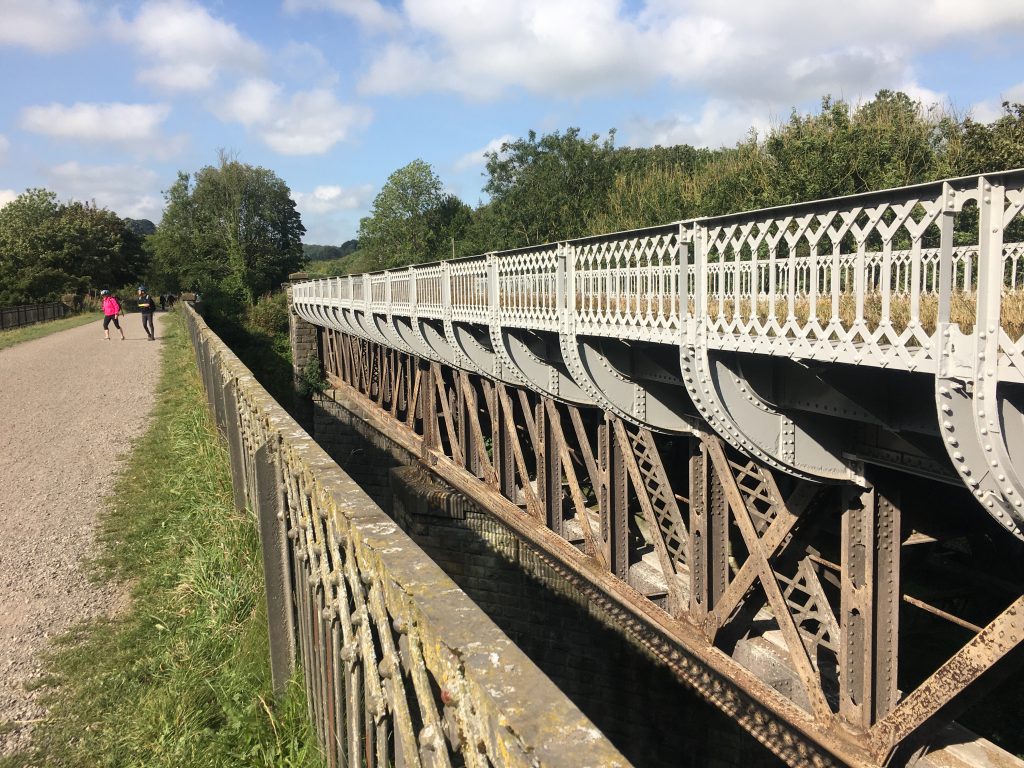 We followed up our bike ride with a pint in a pub in Bakewell, which was absolutely heaving with tourists. We managed to find a pub with a tiny outside yard (aka smoking area, but fortunately without the smokers while we were there) which wasn’t rammed with people. A more relaxed pint was had back at the campsite’s bar.

The following day was it was time to take the long journey home. A journey of many many hours with the M5 southbound closed for a major accident. My bladder was very thankful that we had an on-board toilet.

And that marks the end of our write up of a trip to the Peak District, a whole three months ago.