After Rome Paul decreed that he couldn’t cope with any more ‘Old Sh*t’ and needed to detox. So it was time to find somewhere we could walk or cycle and get out into the natural environment. We headed inland to Campodimele, chosen because it gave us access to the hills of the Aurunci Natural Park. What we didn’t realise was that Campodimele is a longevity hotspot. A place where the fabled Mediterranean lifestyle allows residents to live to a ripe old age, in fact they expect the average age of death of the current residents to be 95 years, which – when you think about it – is quite astounding.

Campodimele was yet another Italian hill town and we can’t get enough of them. Even if they are not in tourist guide books there is always something to explore, in fact as we drive past any hill town we end up worrying that we’re missing out on a nugget of interest. 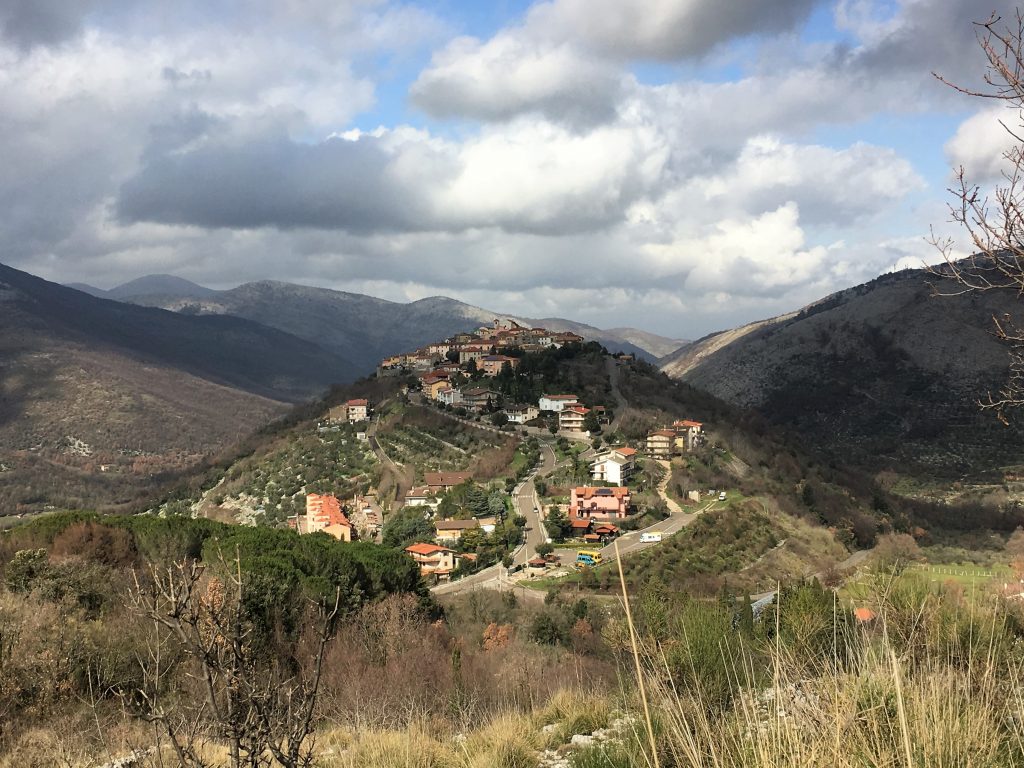 The name of the town literally means field of honey, but sadly I didn’t find any honey to take away with me (I like honey with my favourite breakfasts, yoghurt, porridge or sometimes ‘overnight oats’ a combination of the two – oh ok, my favourite breakfast is a bacon buttie, but I like to pretend to be healthy). It perches on a perfectly conical hill, not in the natural park itself, but surrounded by the park on all sides. It’s only a small town and still has it’s walls and towers incorporated into the buildings that lean up against them. The sosta here sits just below the town and at the start of the walk up Mount Faggeto which was our first outing. There are many trails here and the details can be picked up from tourist information, plus there was a good map board at the Sosta. 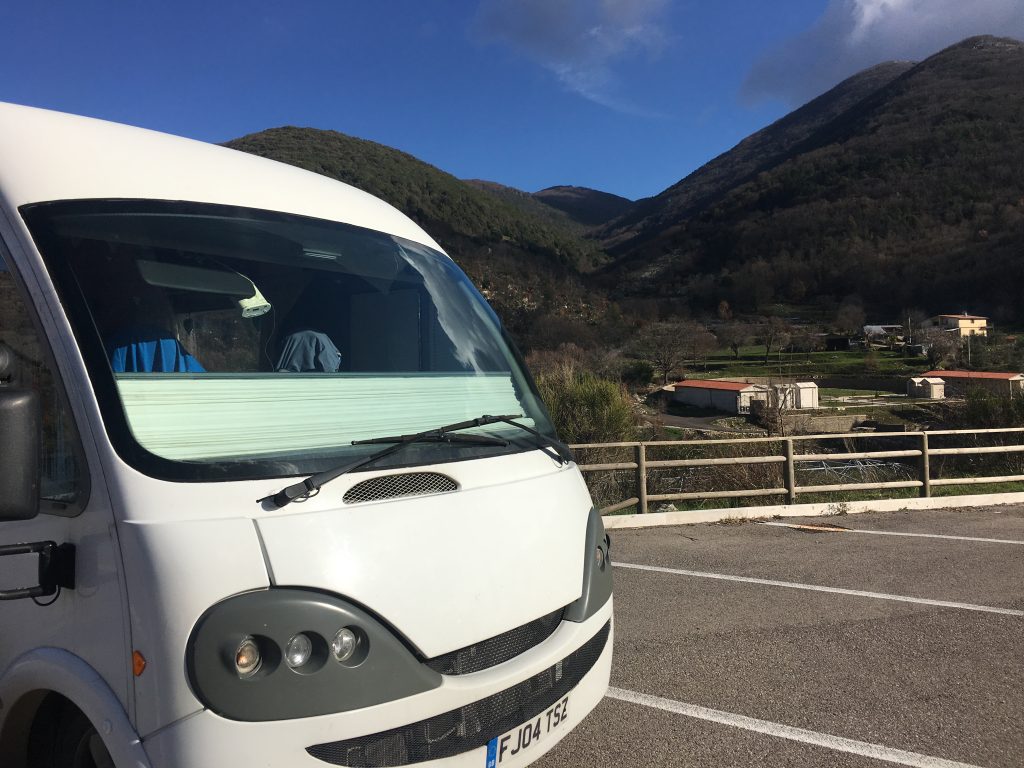 We left the sosta to wander up the marked path through the river valley. The markings on the path were the white and red of the Club Alpino Italiano which meant they were well maintained, unlike the locally maintained route markings in some areas which were funded by the EU and have been left to their own devices since funding dried up. The route was not too taxing as it took us on a gentle uphill through the valley criss-crossing the barely existent water. The sound of cow bells could be heard above us on the sides of the valley but the trees were too thick to see through even though most of their leaves had dropped. Along the watercourse were multiple stone dams, we wondered what they were for; they weren’t in use anymore and the pools behind them had mostly silted up. As we got higher we started to see snow on the ground and snowdrops growing around the path, a heartening first sign of spring. When we finally emerged from the woodland we were nearly at the top of the mountain, just a small climb up the slope to the summit cross, made slightly harder work than it needed to be by the thin layer of snow that slipped under our feet.

The wind was strong at the top and we could see clouds starting to roll up the far slopes towards us, we took shelter by the mouth of a cave where warm air (well warmer than outside) was being expelled and creating a tiny microclimate of frost free ferns and grass. Here we ate our lunch quickly so that we could get moving before the clouds reached us. We didn’t want to get stuck in fog.

We struck off the main path for our return route, following barely visible red marks on the rocks that led along a lovely rocky limestone ridge. The views were pretty good and would have been amazing on a clear day. As we reached the end of the ridge, marked by a post, we encountered a solitary bull guarding a small area of pasture, we edged around him carefully before descending steeply down slopes of ankle breaking shattered rock. There was no discernible path now so it was a case of taking a bearing and heading in the right direction, picking our way over rocks, down muddy banks and between mossy trees. Finally we reached the main track back down to the parking spot, as is always the case we could see the pale red path markers when we looked back.

A long walk in beautiful surroundings with no one else for company had been the perfect antidote to the hustle and bustle of Rome. We liked it here so decided to stay another night, this time joined by an Austrian couple in their campervan.

The following morning we took a cycle ride to the village of Pico. We started out following the tiny road between the parking spot and the mountains. This took us past several small farms where the farm dogs enjoyed chasing us, before bounding across the fields to intercept us again later. They knew what they were doing.

We passed a restored but empty monastery before eventually left the road to join a footpath that took us up and down over the side of the hill. It was hard going on the bikes, but the views were amazing and it seemed over too soon as we finally made it to a farm track on the outskirts of Pico where we zoomed down the steep gradient to the main road. 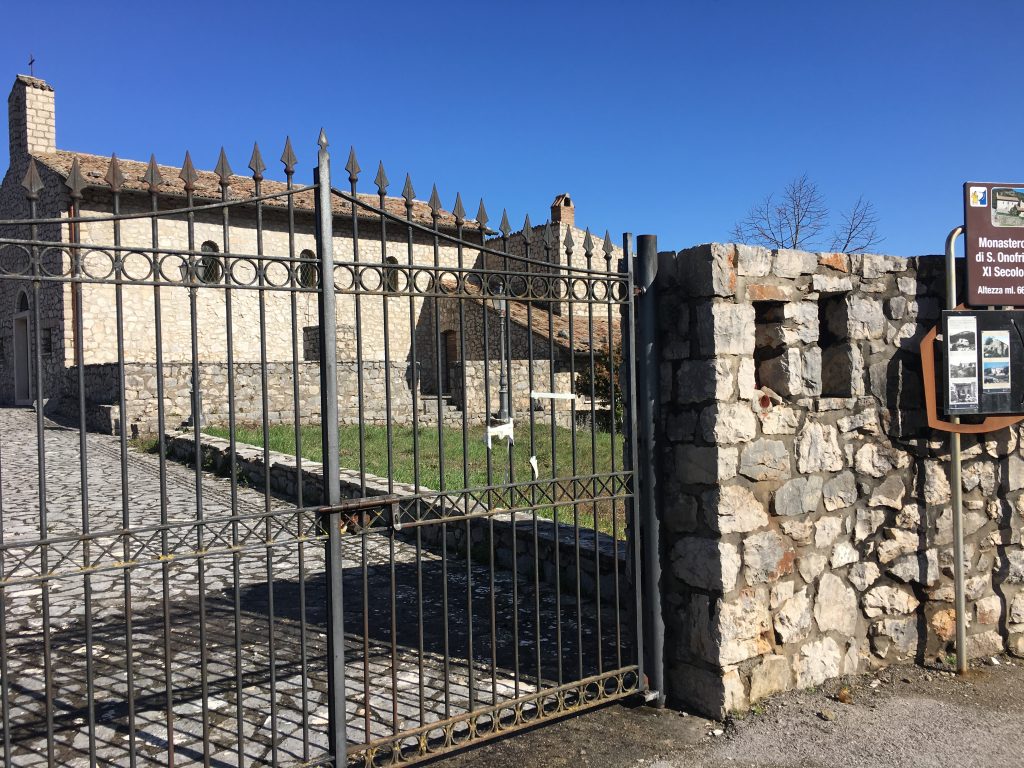 The way back was along the main road , a long slightly uphill stretch of road, we passed Camopdimele before doubling back on ourselves. As we gazed up at the village on the hill above us we decided that we would take the longer more gentle route back, rather than tackling the steep paths back up to the sosta. 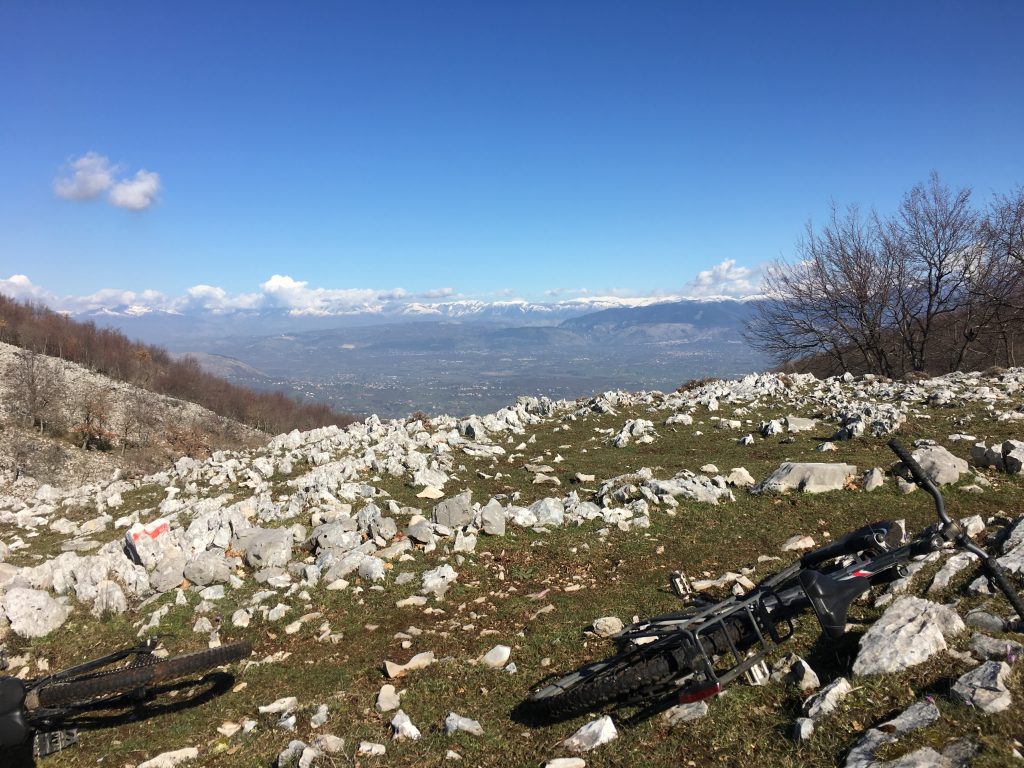